Graphics 19 and 20 show ongoing developments as the Soviets were crossing the Oder into Germany. On 25 February 1945 German and Soviet positions at Aurith northwest of Frankfurt/Oder were clearly annotated. It appeared that the Soviets had deployed a Bailey Bridge across the river and had access to a ferry crossing. Bridging material was noted on a nearby road. By sometime later, the Soviets had established a bridgehead at Gross Neuendorf on the German side of the river.

After the Soviets reached the Vistula, the Luftwaffe continued to use secondary bases in central Poland such as Plock and Seroczki (Graphics 12 & 13).  Surplus aircraft were dispersed to auxiliary fields such as the one at Dzierzanow, where 45 aircraft of a variety types were deployed (Graphic 14). 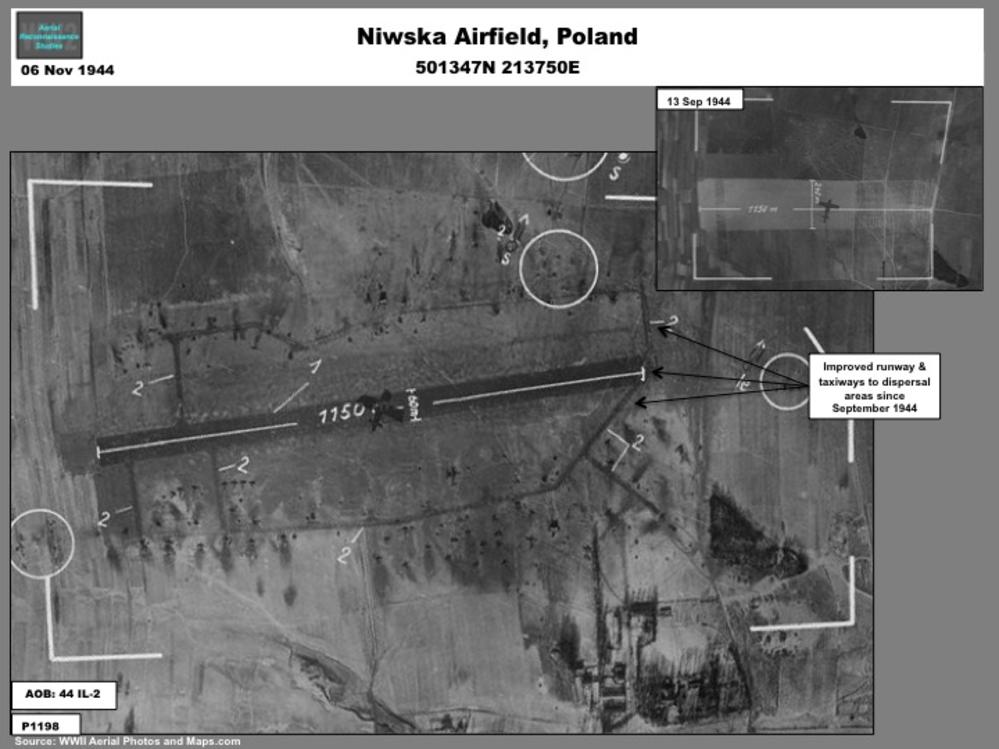 During the Fall of 1944 German reconnaissance kept track of Soviet ground force activity behind the Vistula, including an artillery deployment and an equipment staging area/bivouac on the main axis to Warsaw (Graphics 15 & 16).  A posssible command post, suggested by a heavy concentration of AAA and a small courier airfield with two PO-2 biplanes, was deployed on 15 December at Ceglow, along the rail line East of Warsaw. (Graphic 17).  In January 1945 German reconnaissance recorded the aftermath of a battle for Neidenburg East Prussia, where evidence of recent heavy shelling and bombing could be seen (Graphic 18). 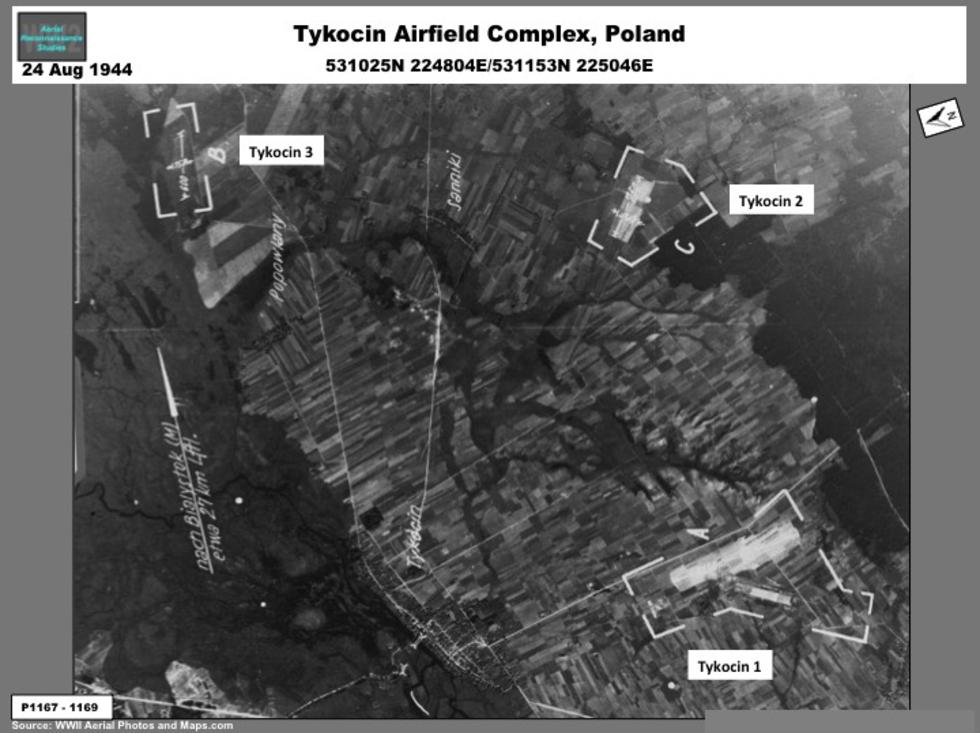 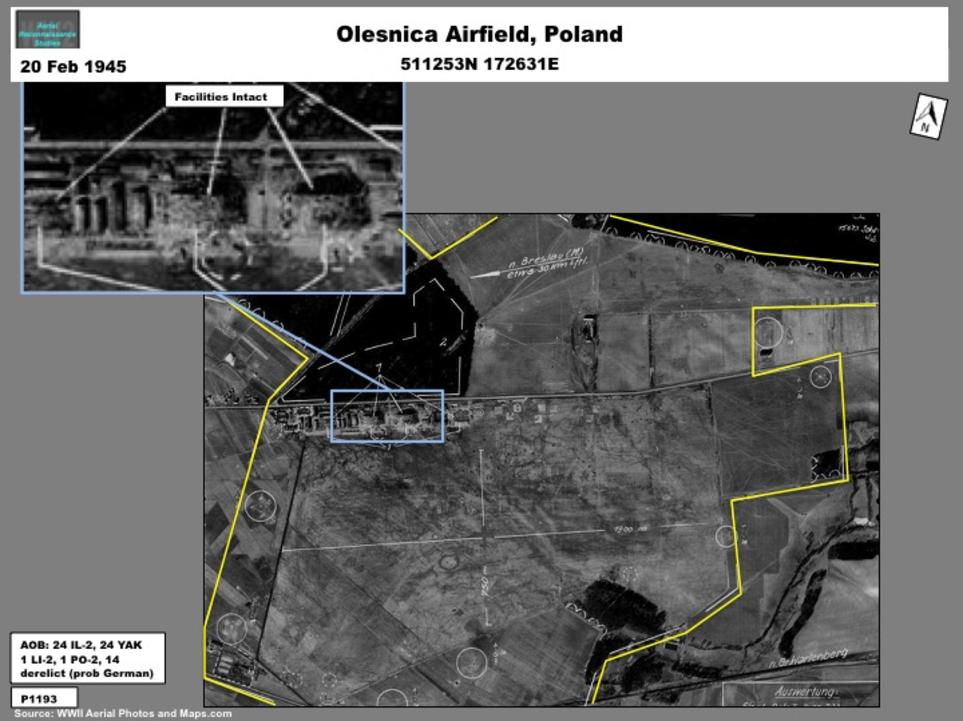 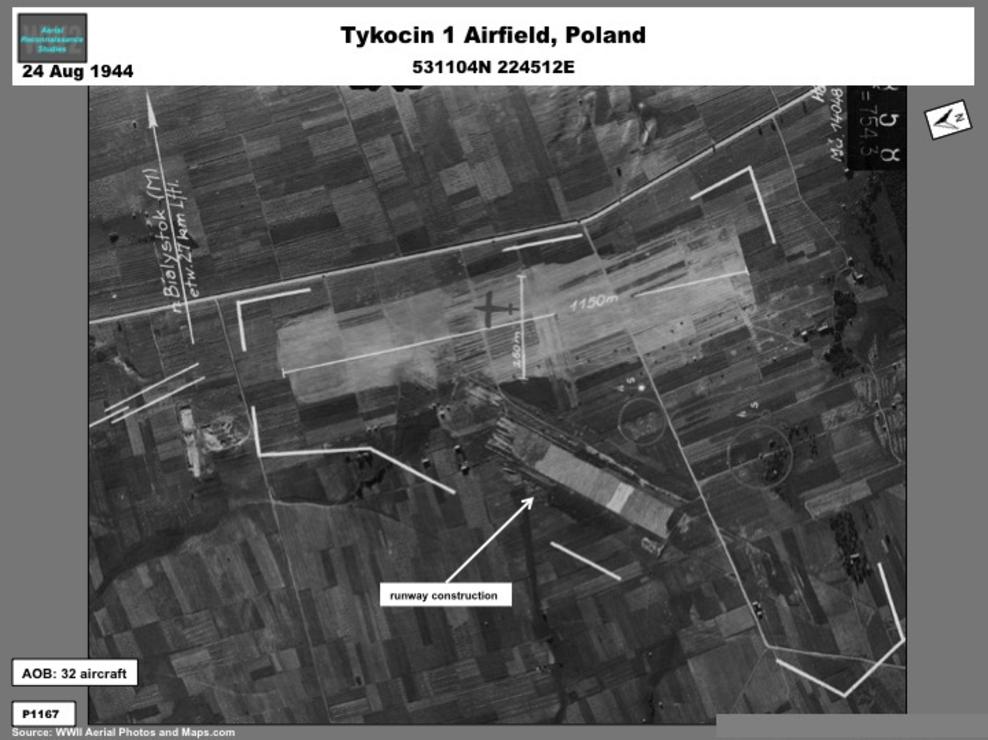 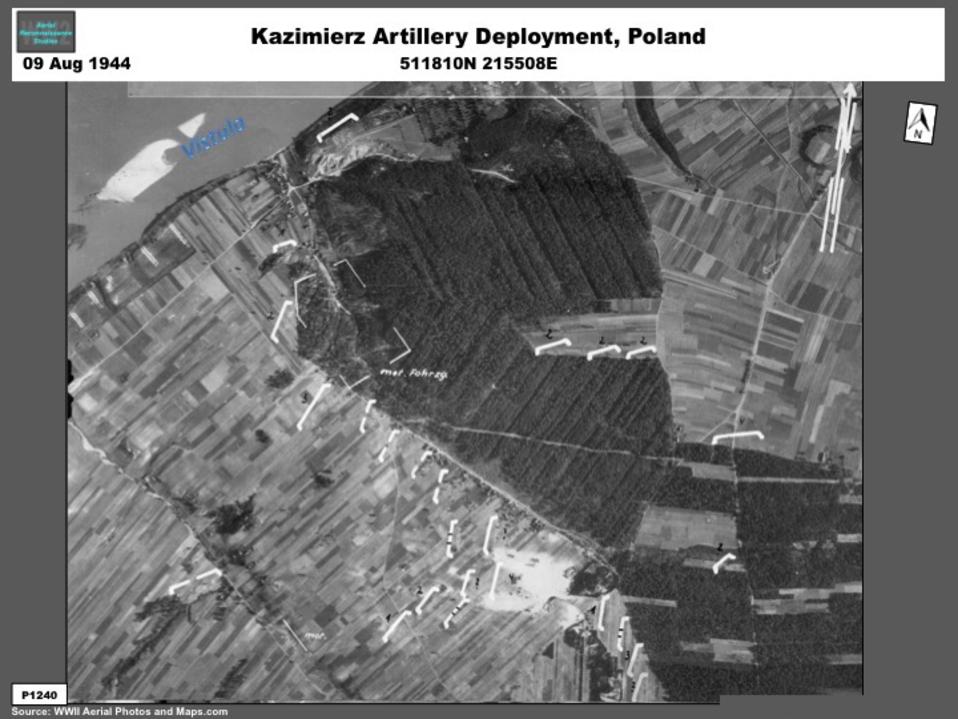 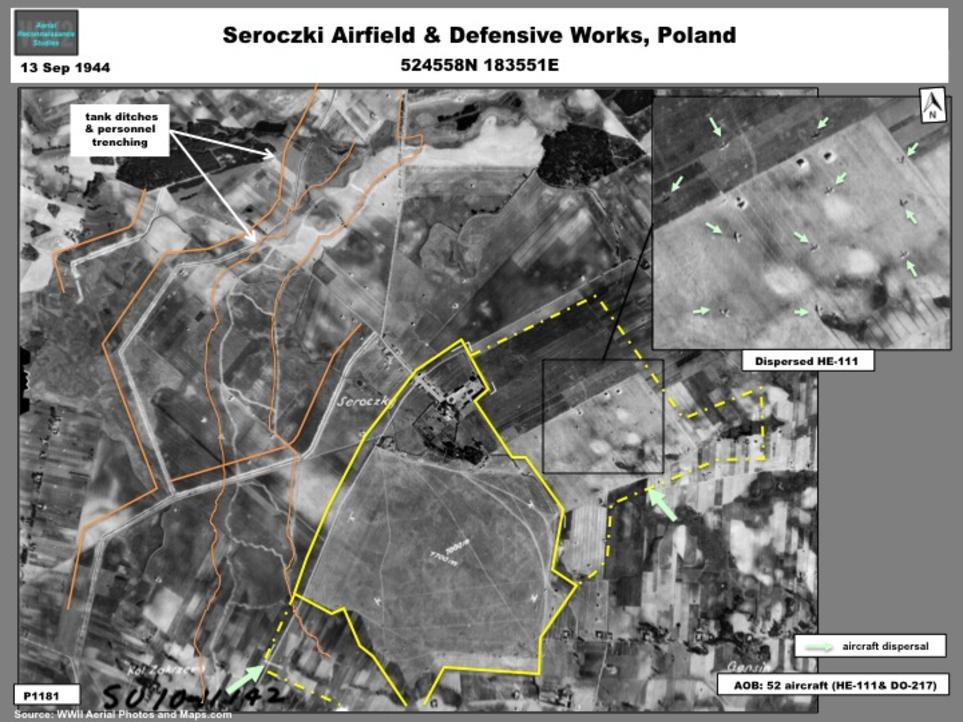 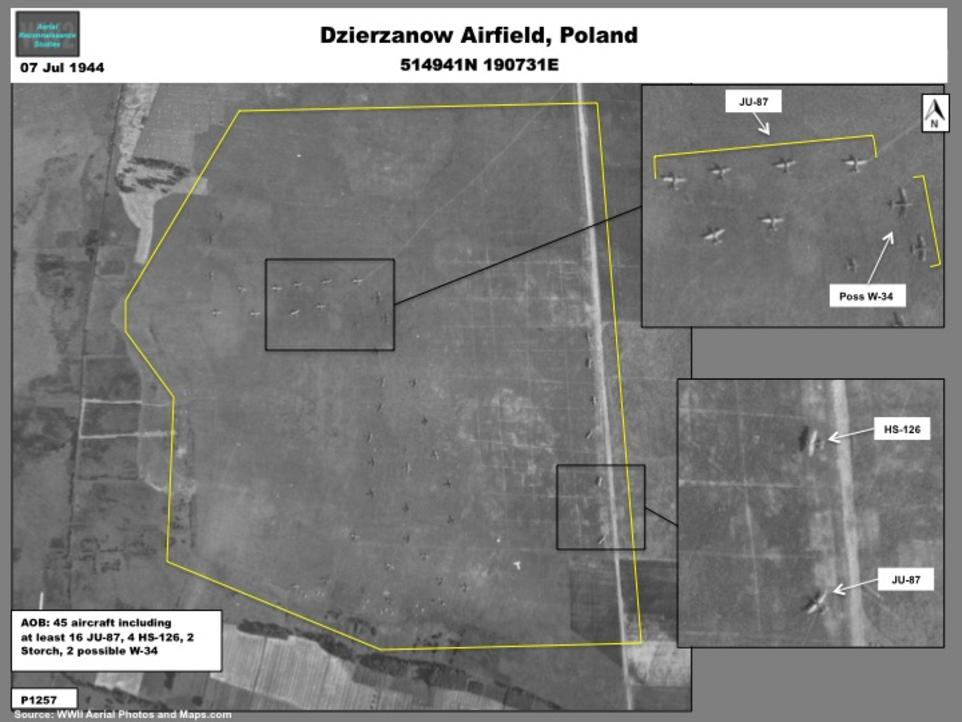 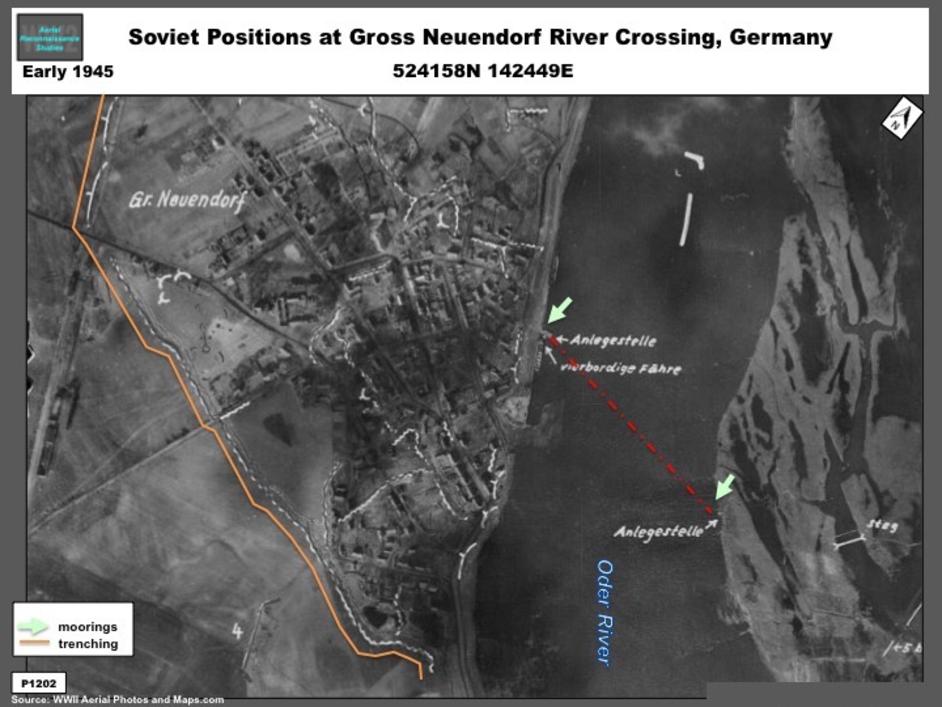 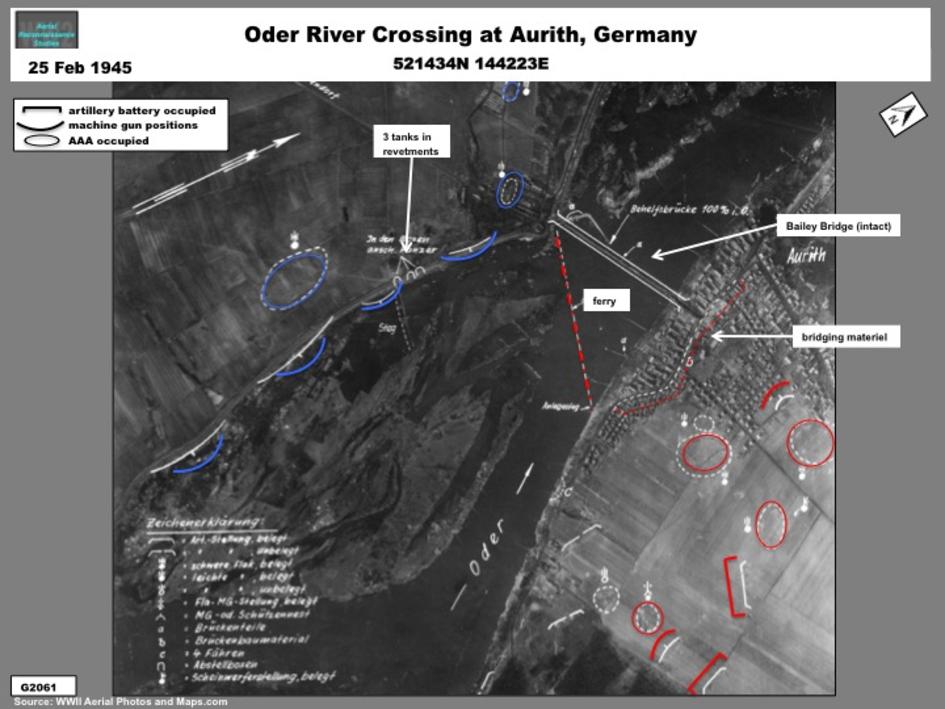 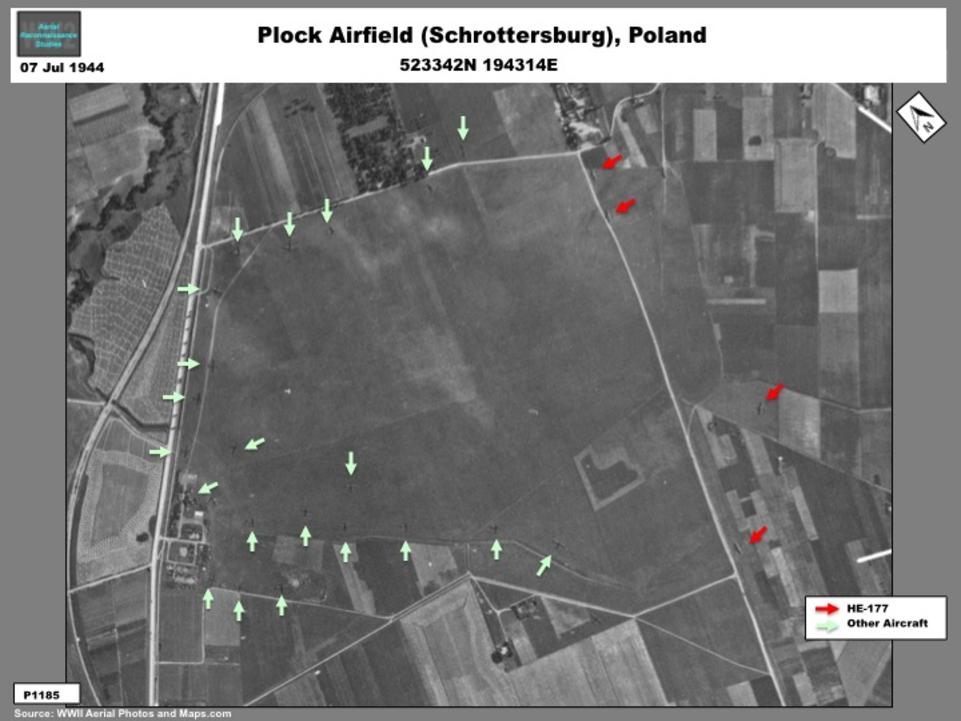 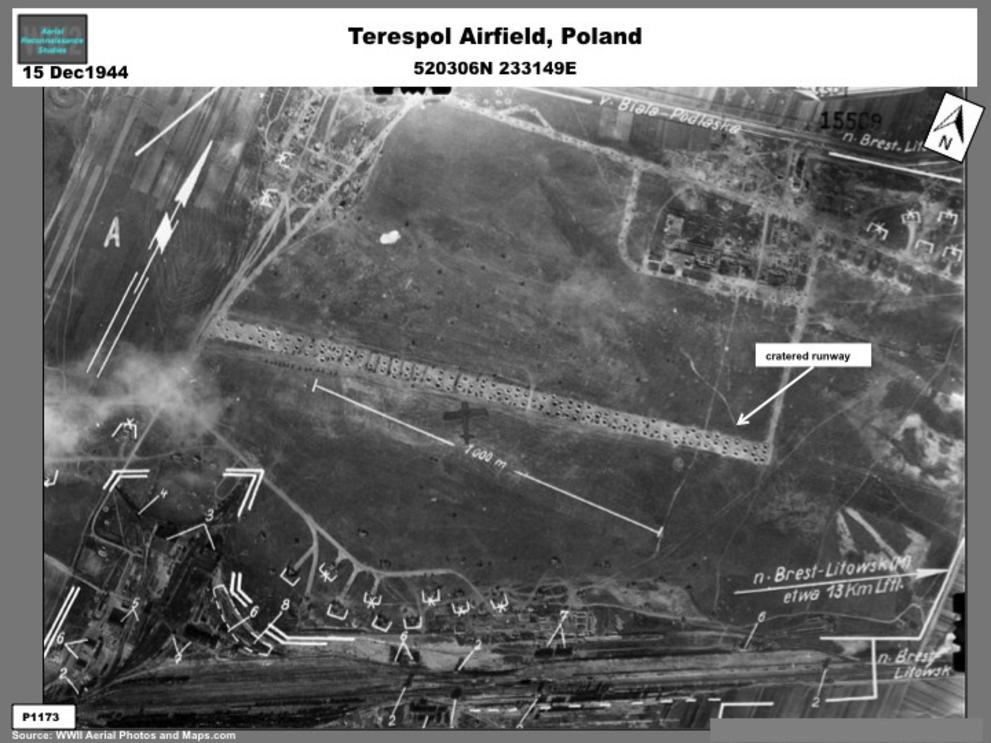 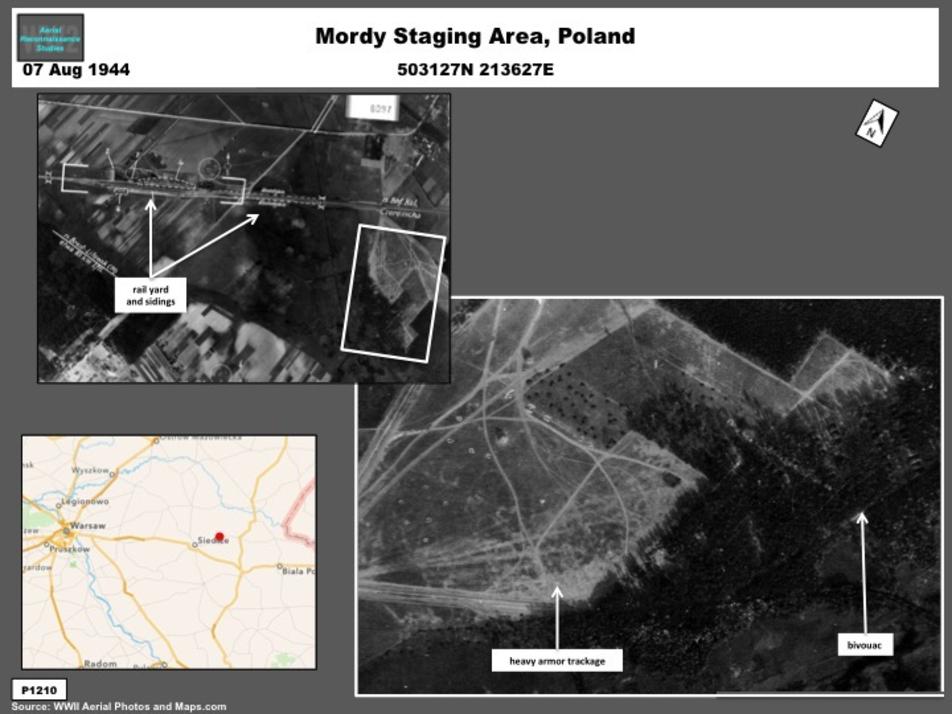 The available GX photography provided a record of events in Poland during the last half of 1944 and early 1945 as the Soviets pushed through to the German border. The Soviets established a large number of tactical airfields --often no more than rolled grass strips-- as they advanced. More than 85 of the new fields were identified by German photo interpretation. Selected fields underwent runway improvements and construction of parking revetments (Graphics 1 - 4). The airfields were initially concentrated in groups behind the Vistula, but new ones were constructed as the Red Army continued on to the Oder (Graphics 5 & 6).

​The Germans demolished airfield facilities as the Soviets approached. Runways were cratered, parking areas plowed, and facilities were destroyed, but did not prevent occupation by the enemy. For example, airfields at Terespol and Klemensow were both in use after destruction (graphics 7 & 8); a PE-2/3 bomber regiment at Klemensow was using the grass strip in November 1944 (Graphic 9). According to German interpreters, one runway at Katowice had been partially repaired by 26 January, despite the evidence of recent cratering the others (Graphic 10). Further East, the airfield at Olesnica was abandoned in haste, leaving facilities intact. (graphic 11). 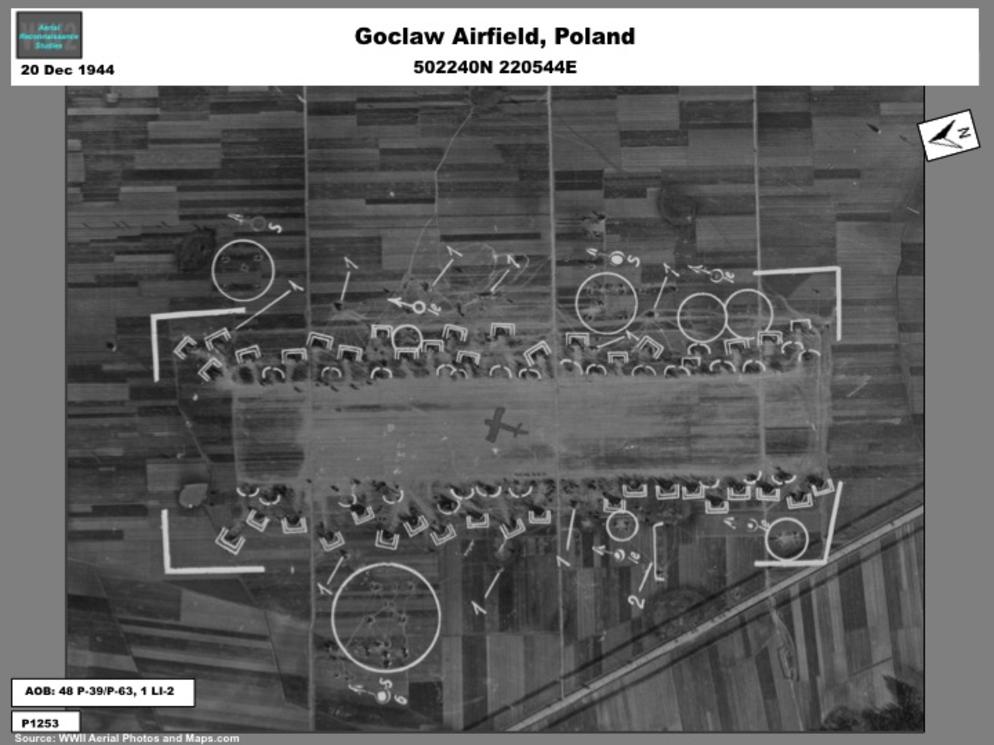 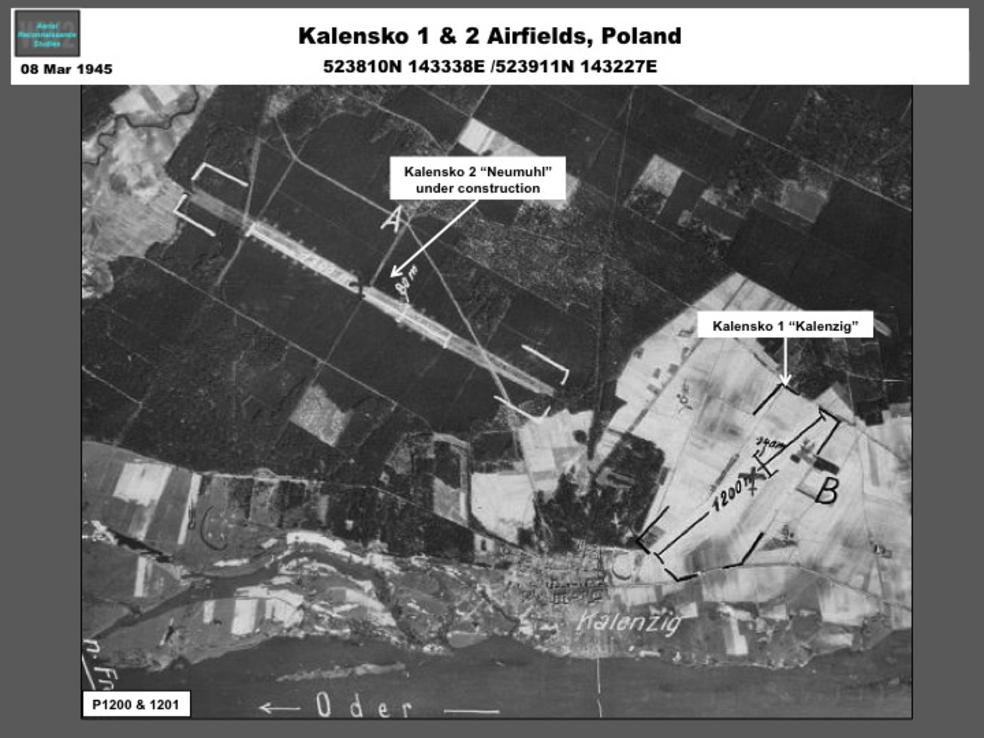 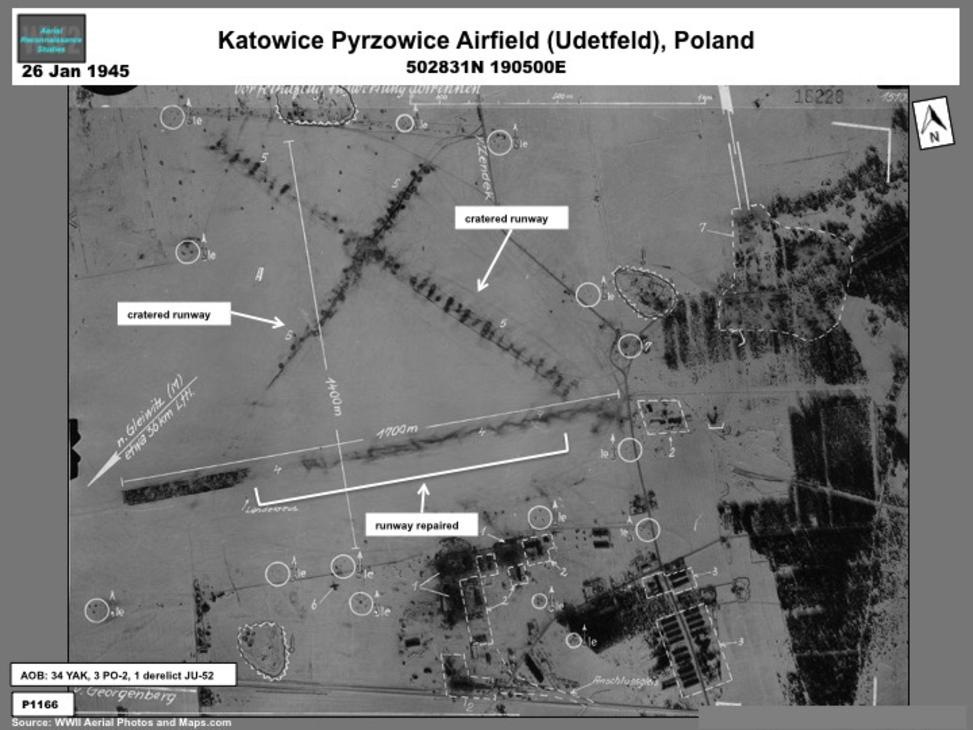 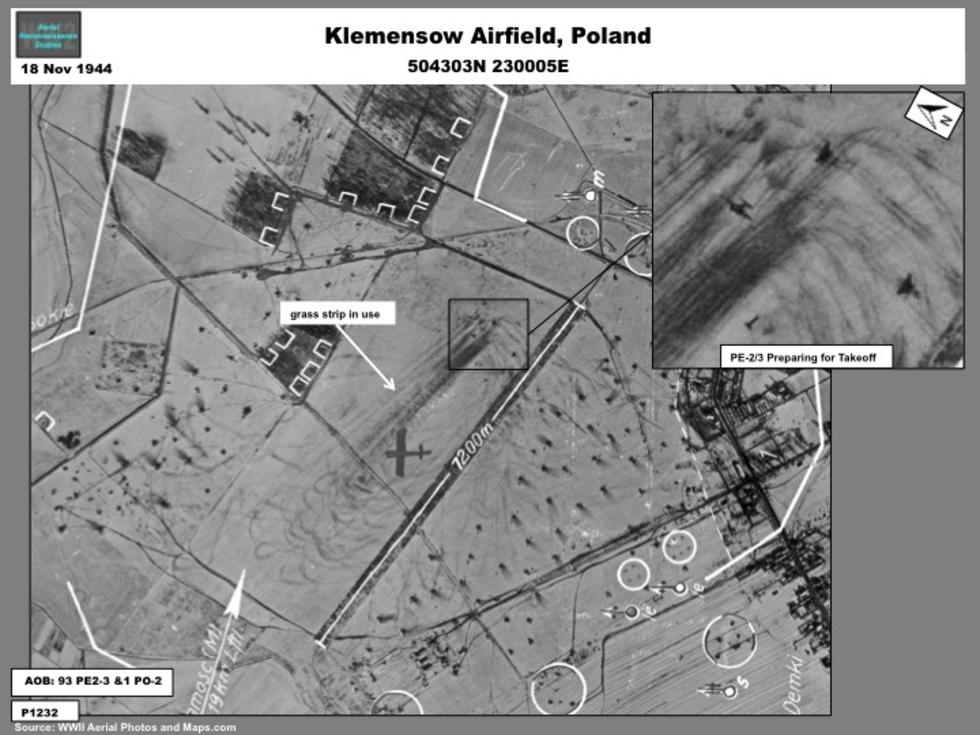 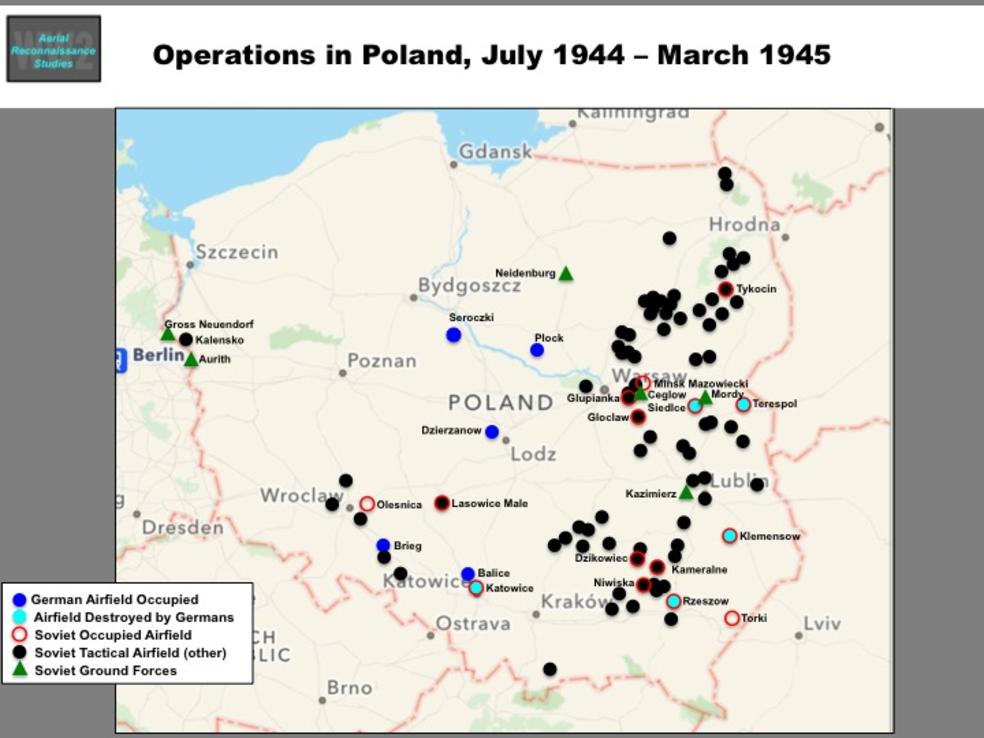 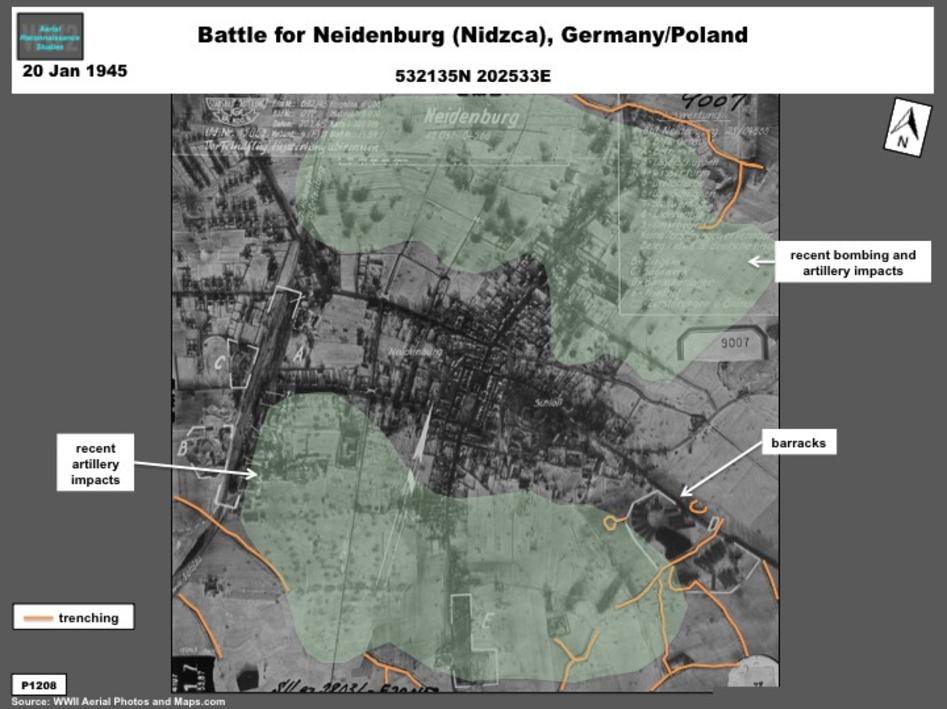 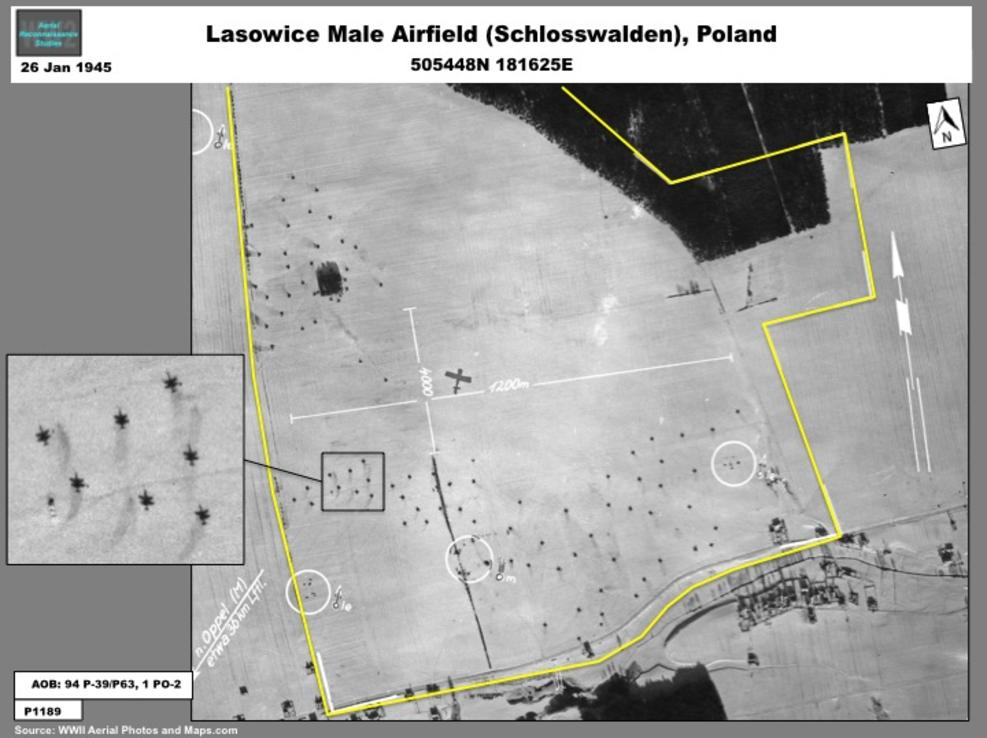 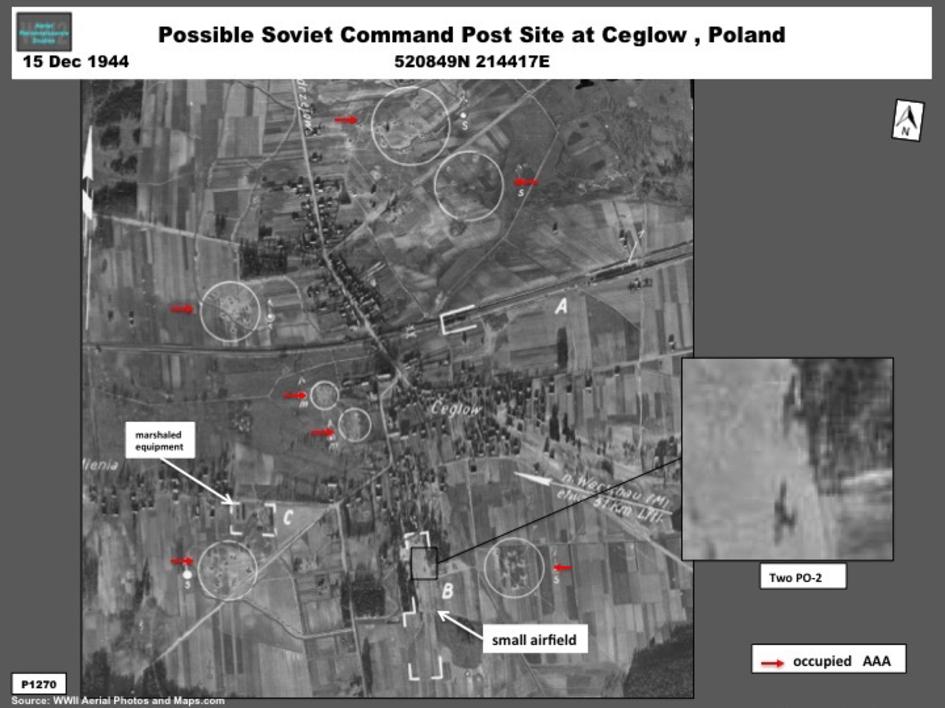 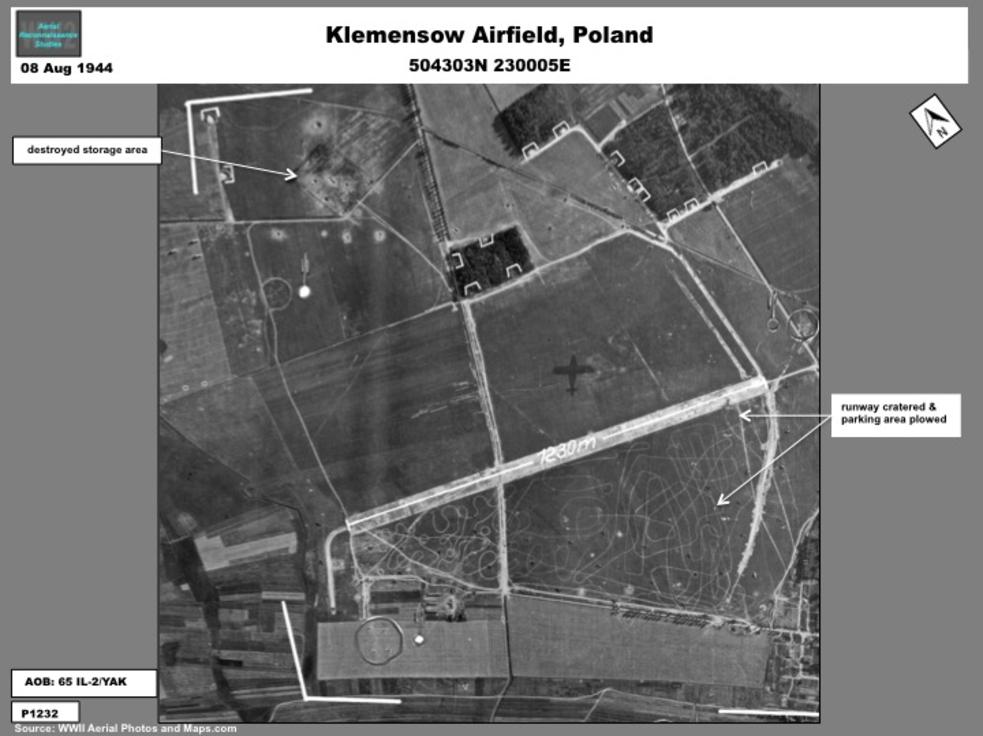