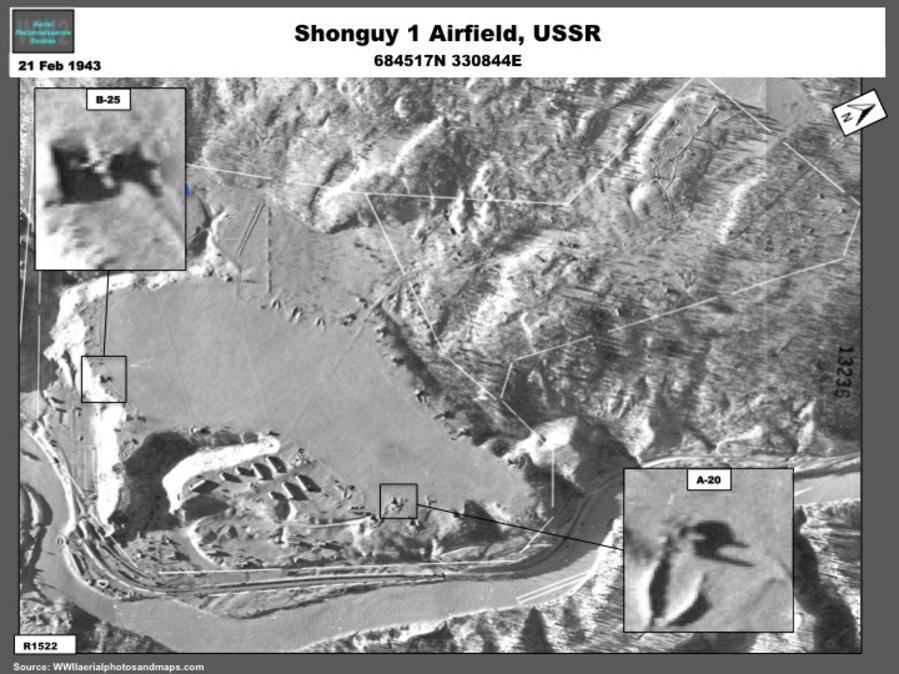 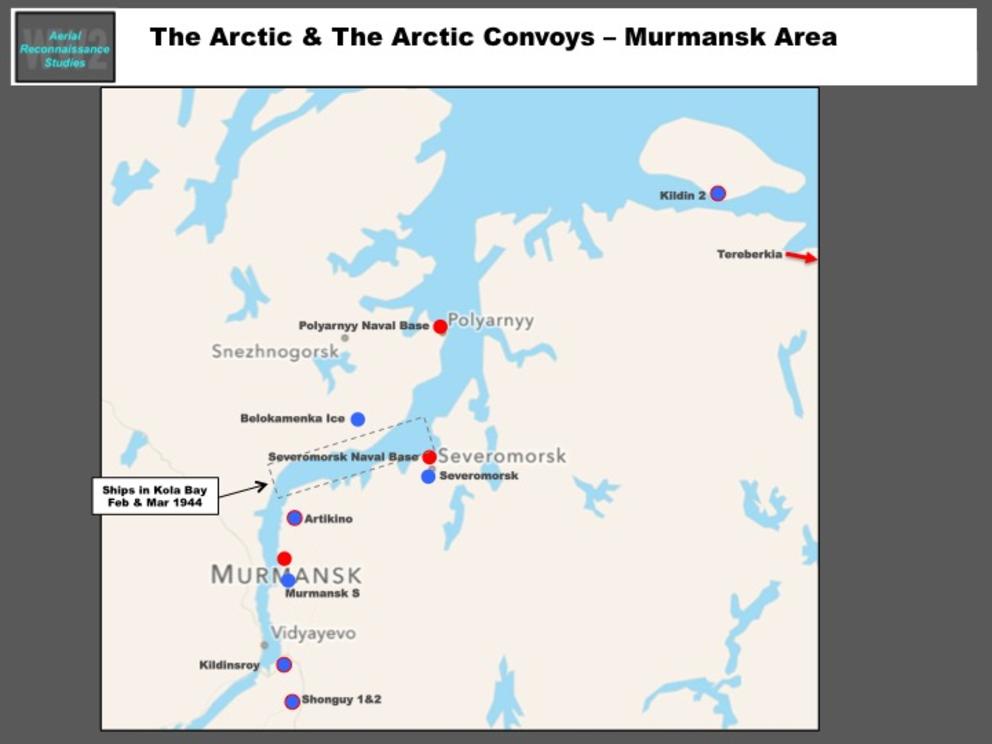 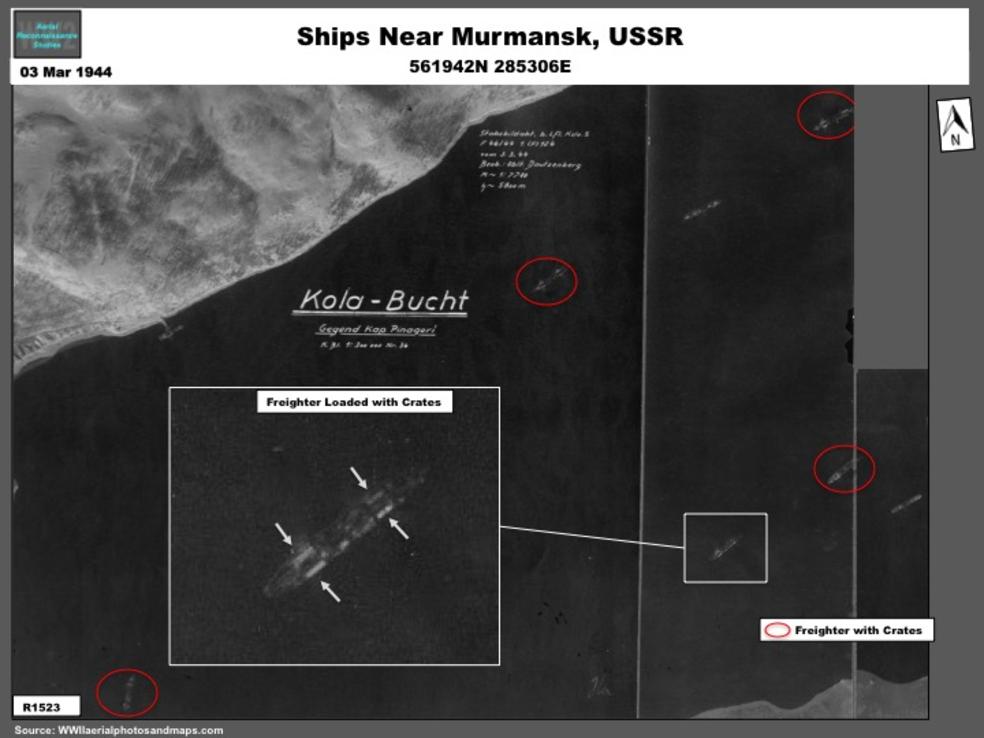 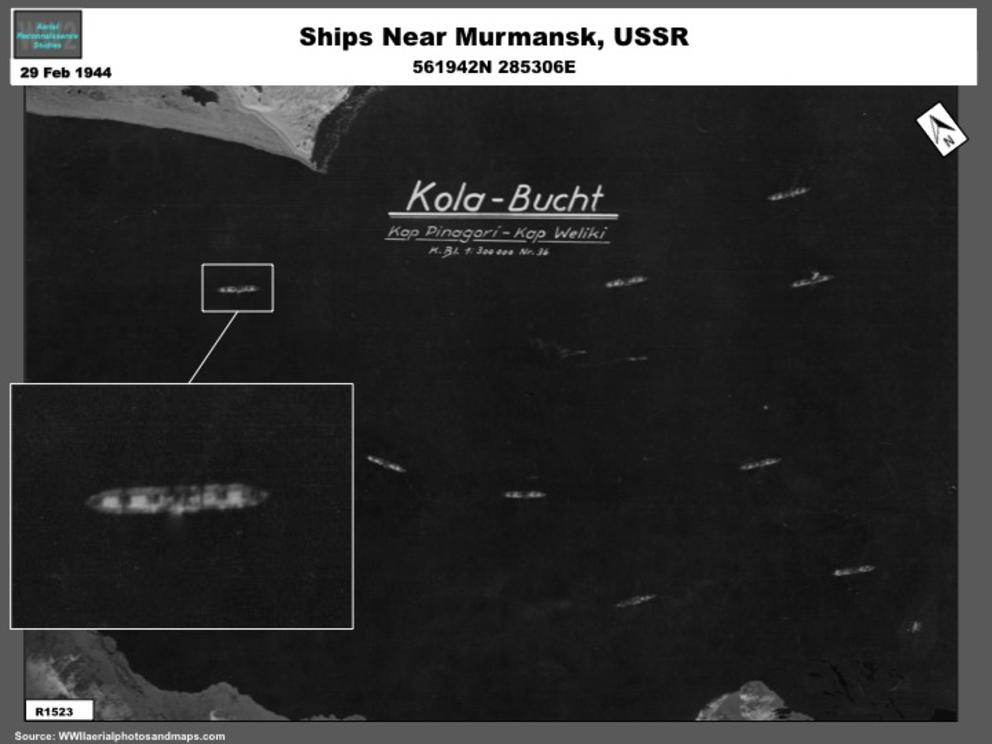 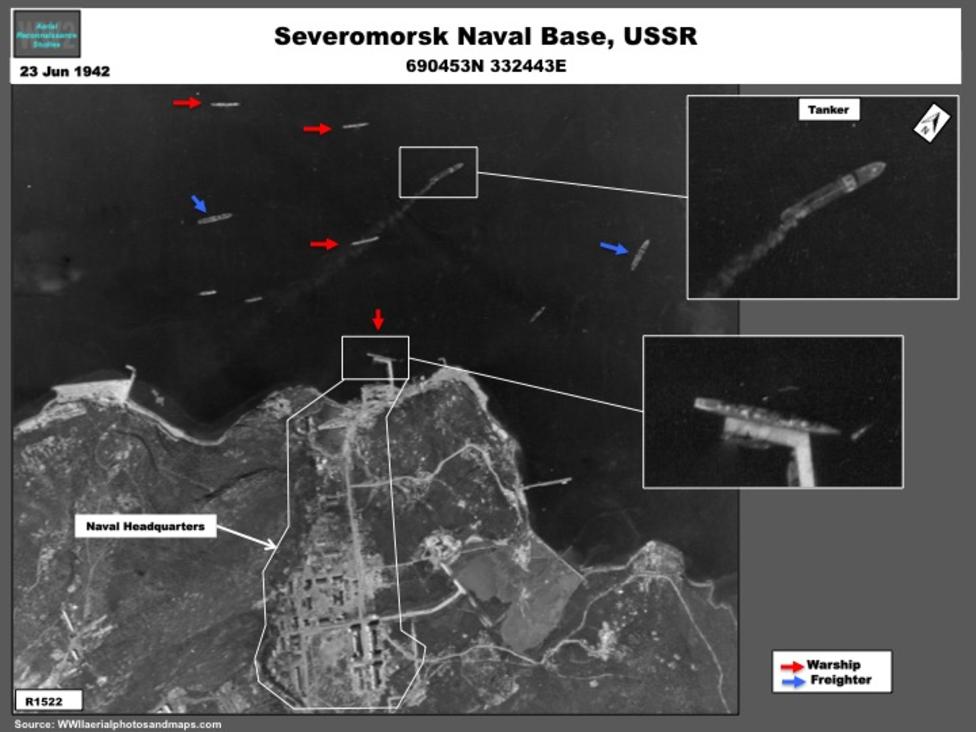 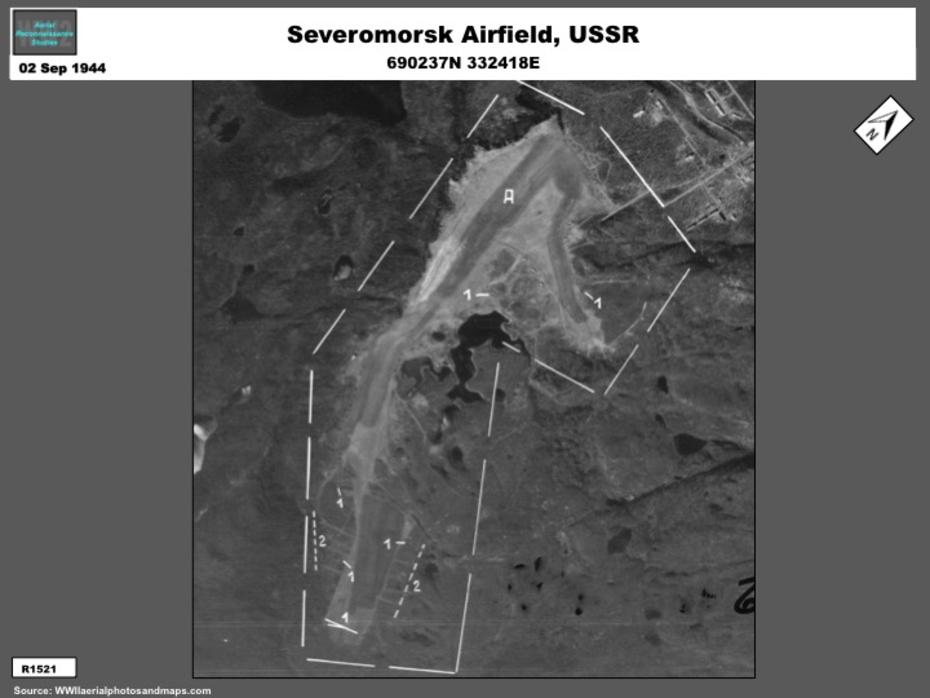 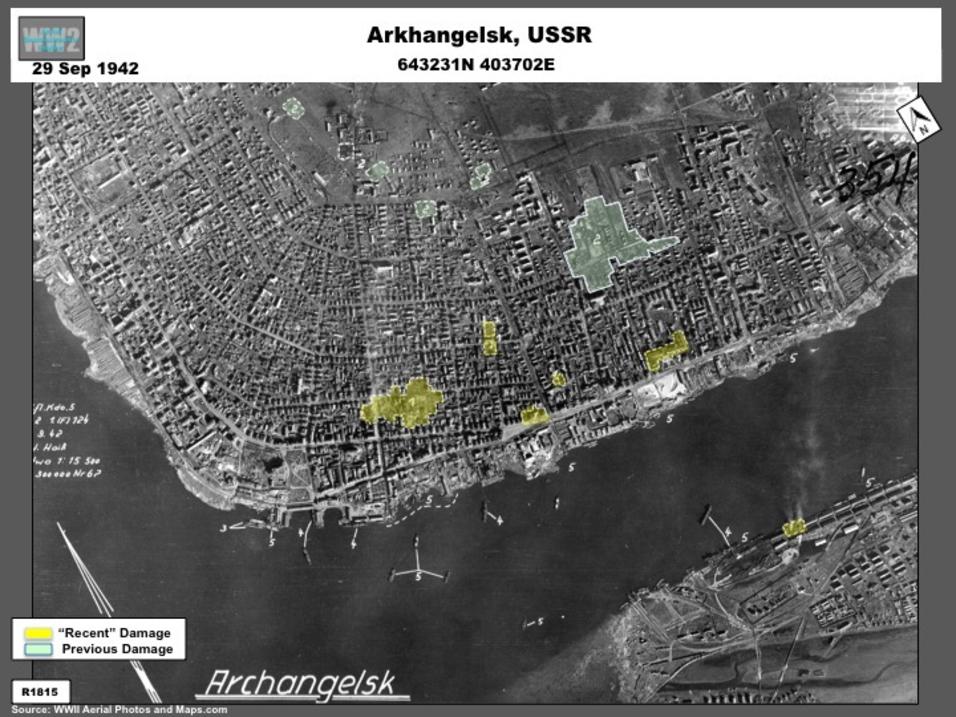 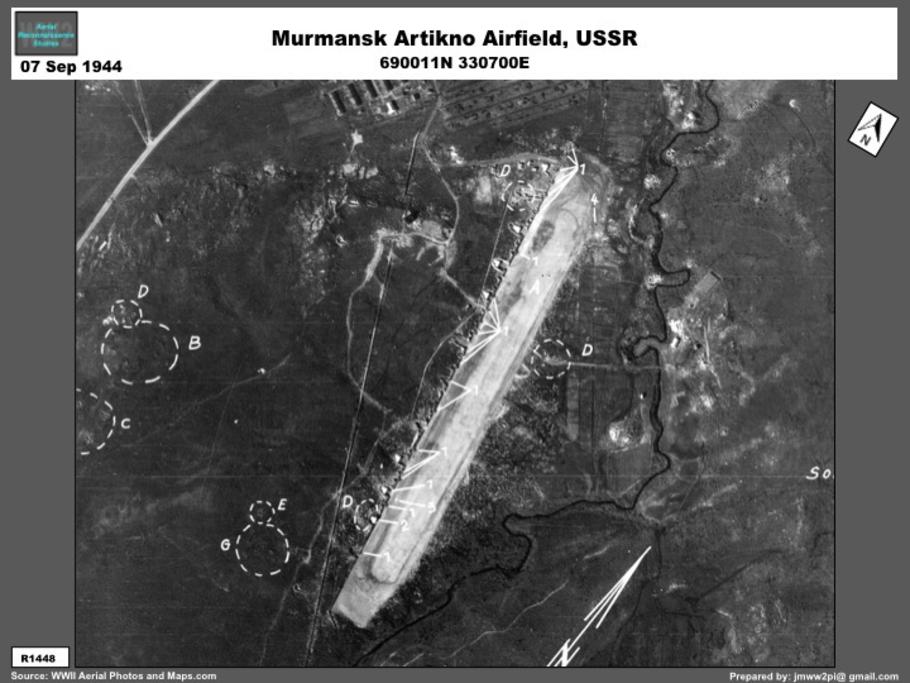 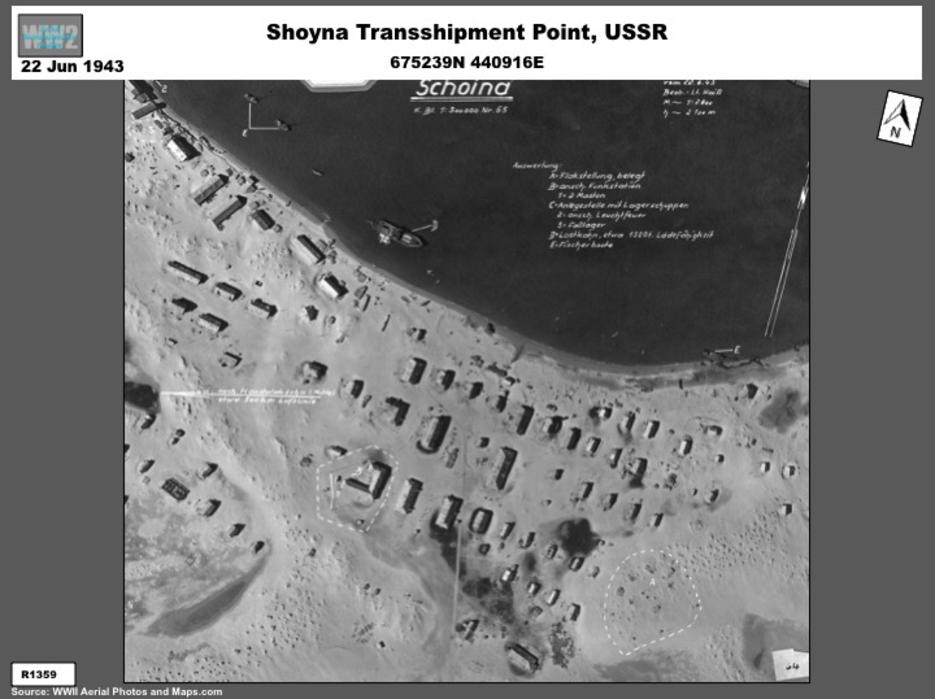 Lend-Lease aircraft, including Hurricanes, P-39/64's, P-40's, B-25's and A-20's, were identified at various times at a number of airfields in the Murmansk-Arkhangelsk region (below).  Some of the aircraft were present in sufficiently large numbers to suggest the processing of equipment from the ports (Arkhangelsk 1, 5 and Murmansk Artikino).  Other groups of aircraft suggest the distribution to units (Onega) or already operational units (Kildin 2).  The presence of one B-25 and one A-20 at Shonguy 1 suggests training familiarization. 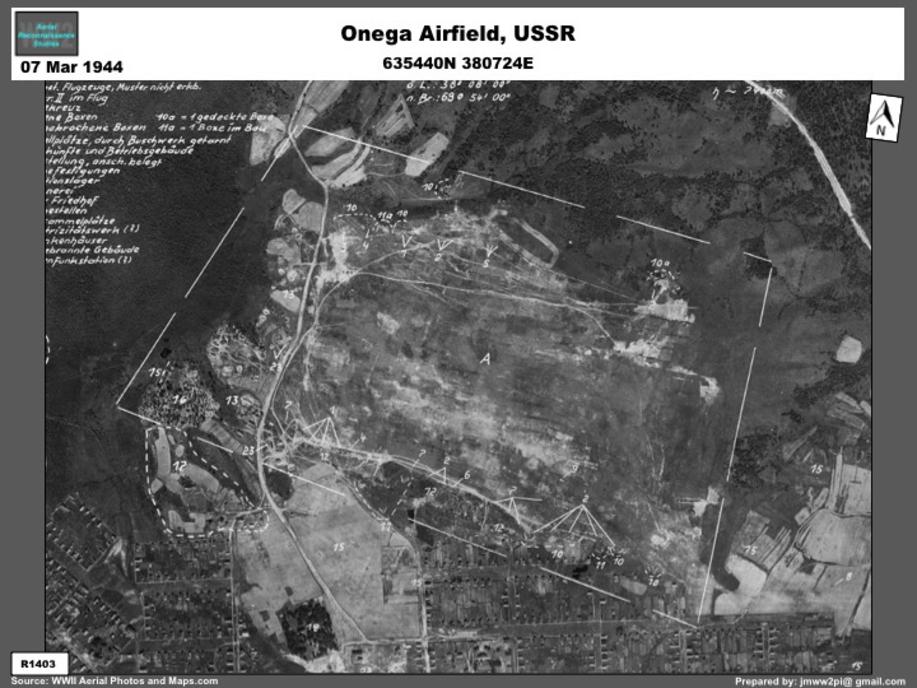 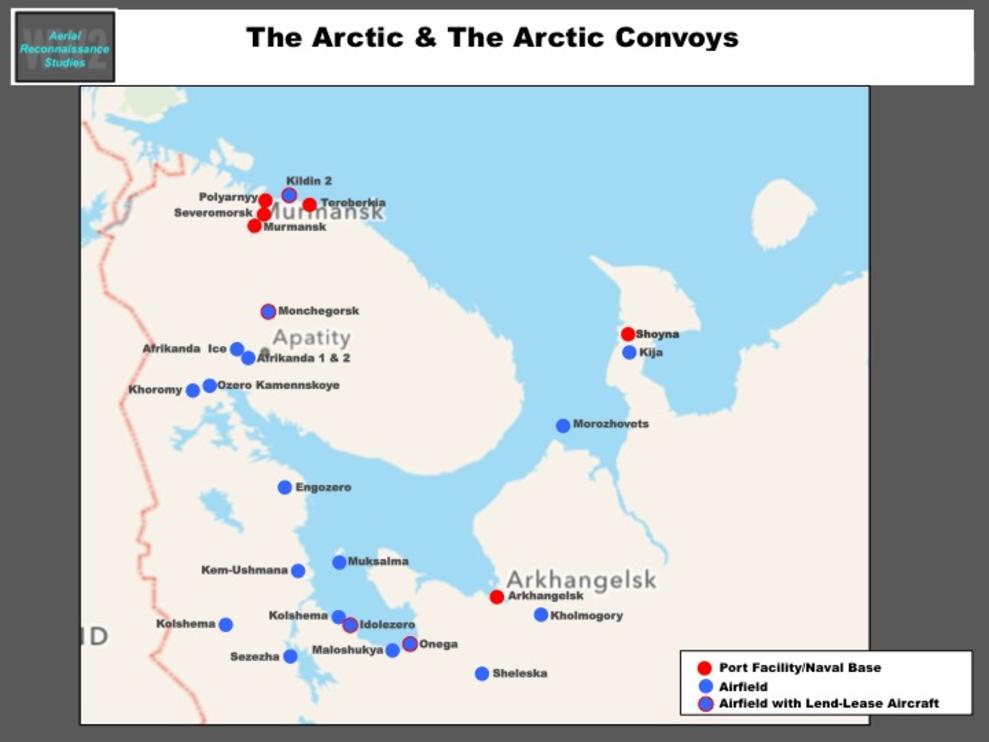 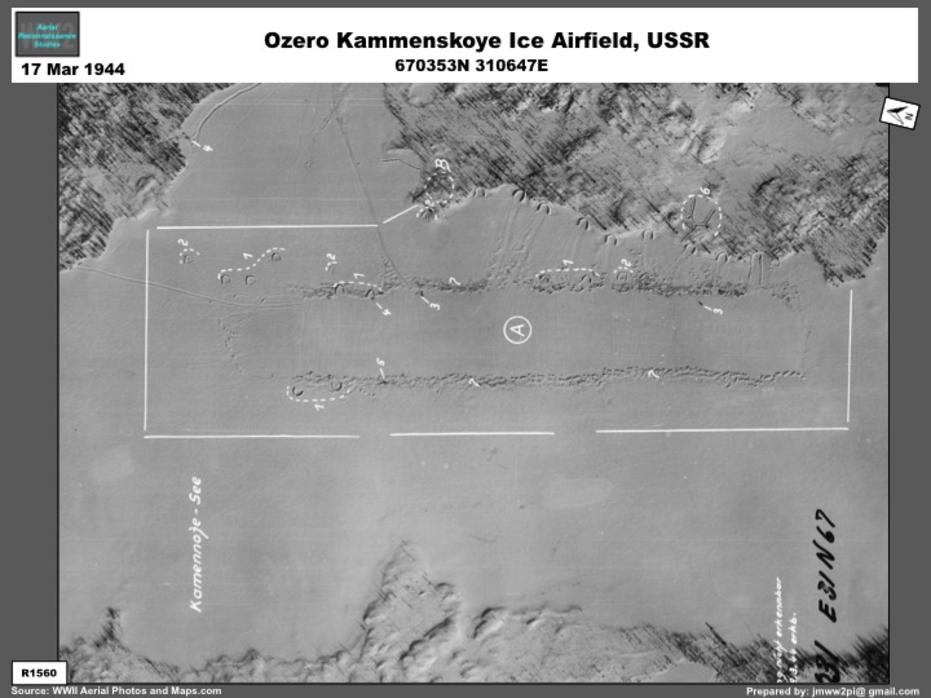 Polyannyy, on the Barents Sea at the mouth of Kola Bay was, and still is, still a major Northern Fleet base.  A newly constructed sunbarine bunker and 10 submarines were identified on 01 July 1943.  Gerrman interpreters noted a probable Bf-109 in flight over the base.

On 23 June 1942 three destroyers, two freighters, and a tanker were lying off the naval base at Severomorsk, northeast of Murmansk (Graphic 4); a fourth destroyer and two patrol boats were moored at the dog-leg pier.  The area shown near the pier included the Headquarters, Northern Fleet, which was still under construction.

Murmansk, along Kola Bay of the Barents Sea, had extensive port facilities (Map 2).  Graphic 1 shows partial coverage of the city and numerous ships nearby.  In February and March 1944 Arctic Convoy ships were moored in a part the bay northeast of Murmansk (Map 2).  On 29 February nine freighters--including eight probable Liberty Ships-- were lying in the western part of the area (Graphic 2).

Based on convoy sailing records, this group was could have been part of Convoy JW5, which arrived on the 28th and departed on 2 March.  However, on 3 March eight other freighters (seven shown) were moored in the eastern part of the area near Severomorsk; five of the ships were still loaded with three-to-four large crates measuring 3.85 m in length according to German interpreters (Graphic 3). 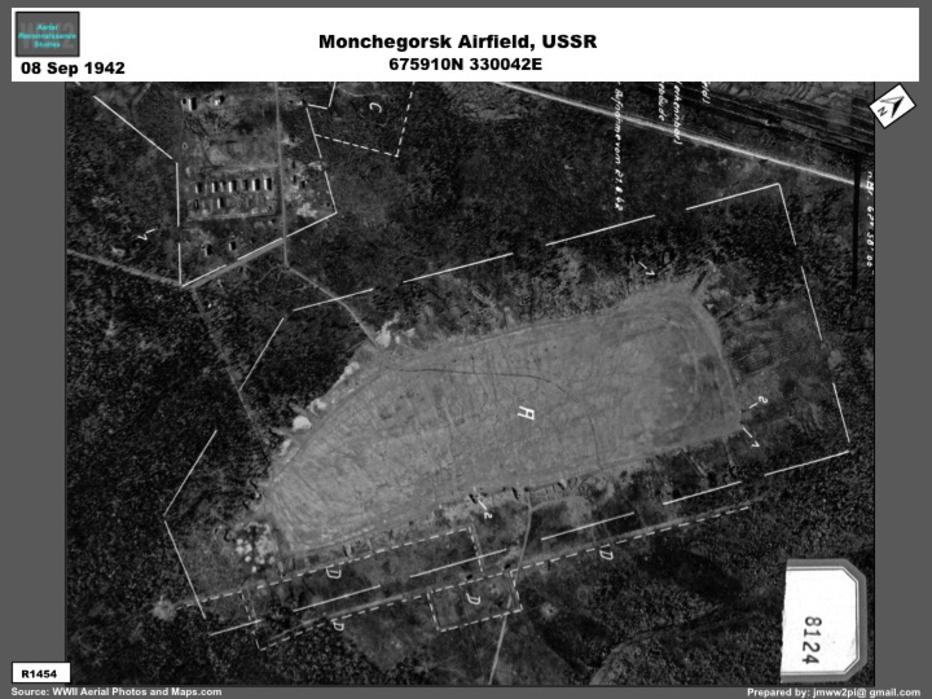 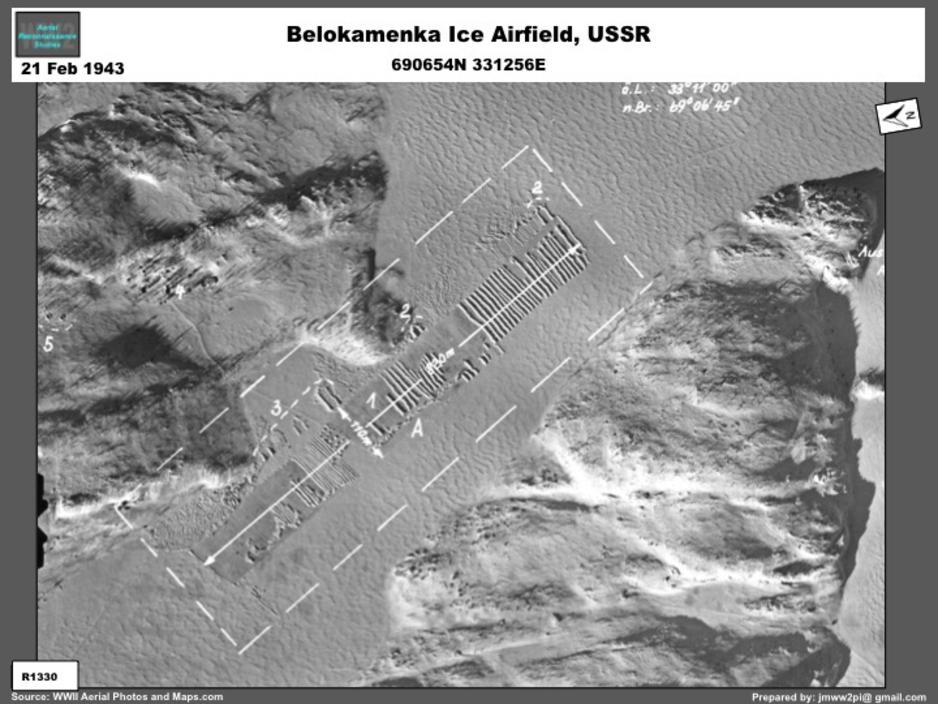 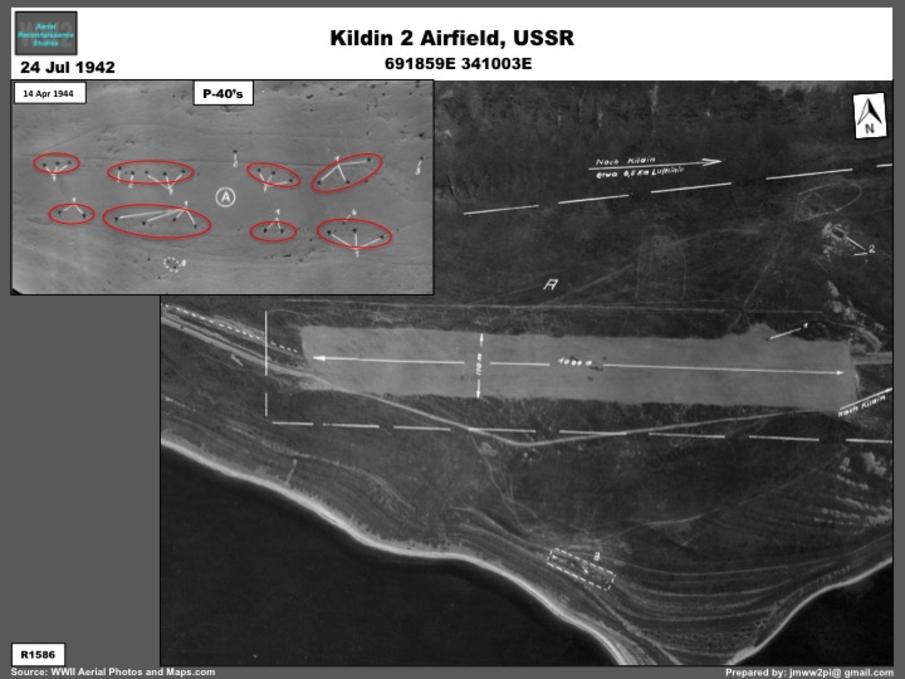 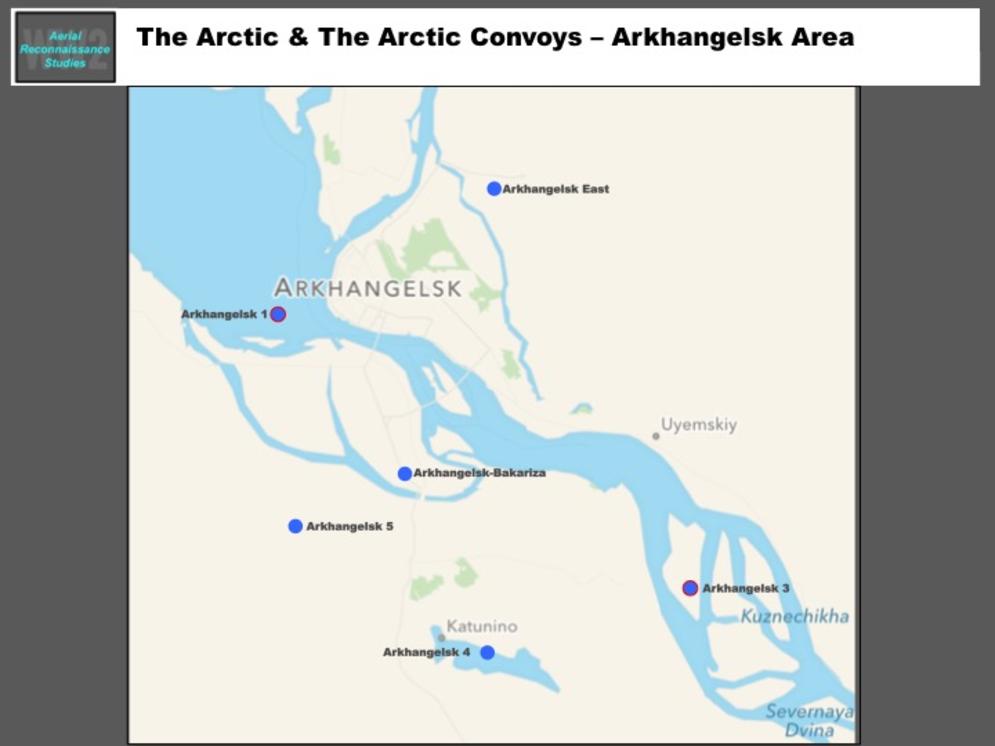 The ports at Murmansk and Arkhangelsk were vital supply points for the Soviet Union under the Lend-Lease Program.  Between August 1941 and May 1945 the ports were visited by 78 convoys escorted by ships of the Royal Navy, Canadian Navy, and U.S. Navy.  Shipping activity was monitored regularly by the Luftwaffe reconnaissance.  The region was also home to the Northern Fleet and was heavily defended by Soviet Army and Naval Aviation operating from a large number of bases. Maps 1-3 show the arctic region with locations of port facilities, naval bases, and airfields.

Arkhangelsk (Map 3), on the White Sea, was USSR's major northern port.  On coverage of 29 September 1942 German interpreters annotated bomb damage from a recent attack (Graphic 5), showing that the city, rather than port facilities were the primary target. However, smoke could still be observed coming from destroyed warehouses along the river.  Destroyed areas from earlier attacks were also annotated.

Despite the number of airfields in the region, the Soviets also prepared winter or "Ice" airfields  on lakes (Graphics 12 and 13). These could have been dummy airfields or served as alternate fields for major bases nearby. 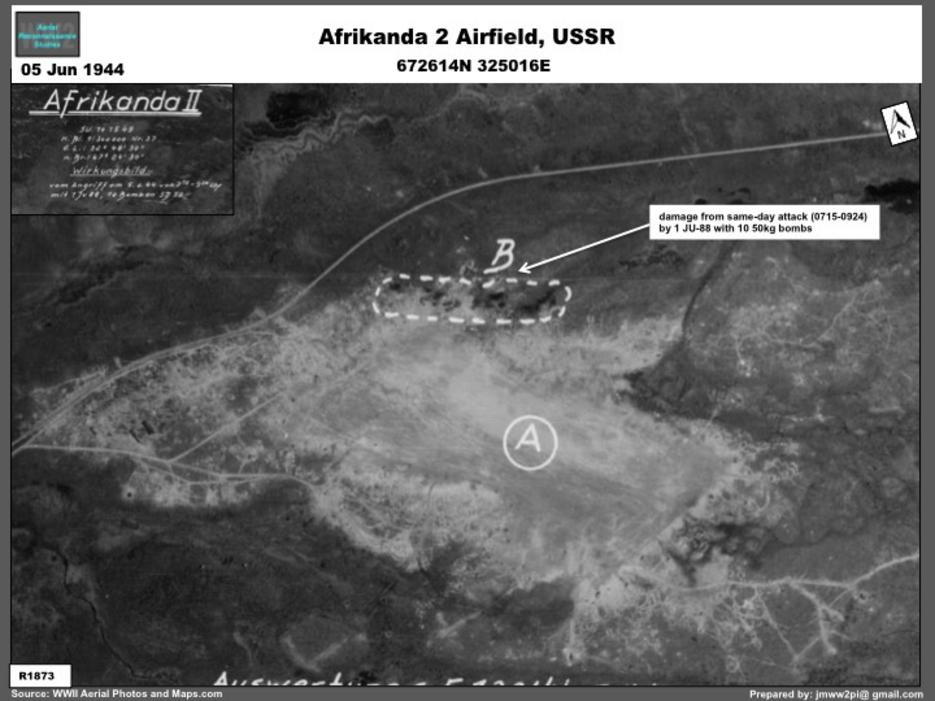 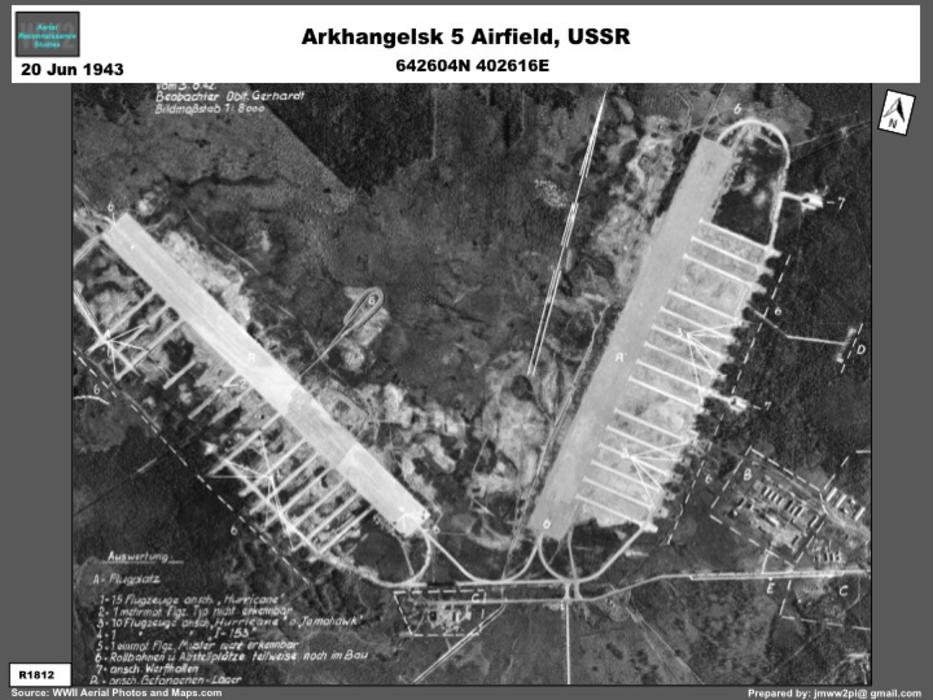 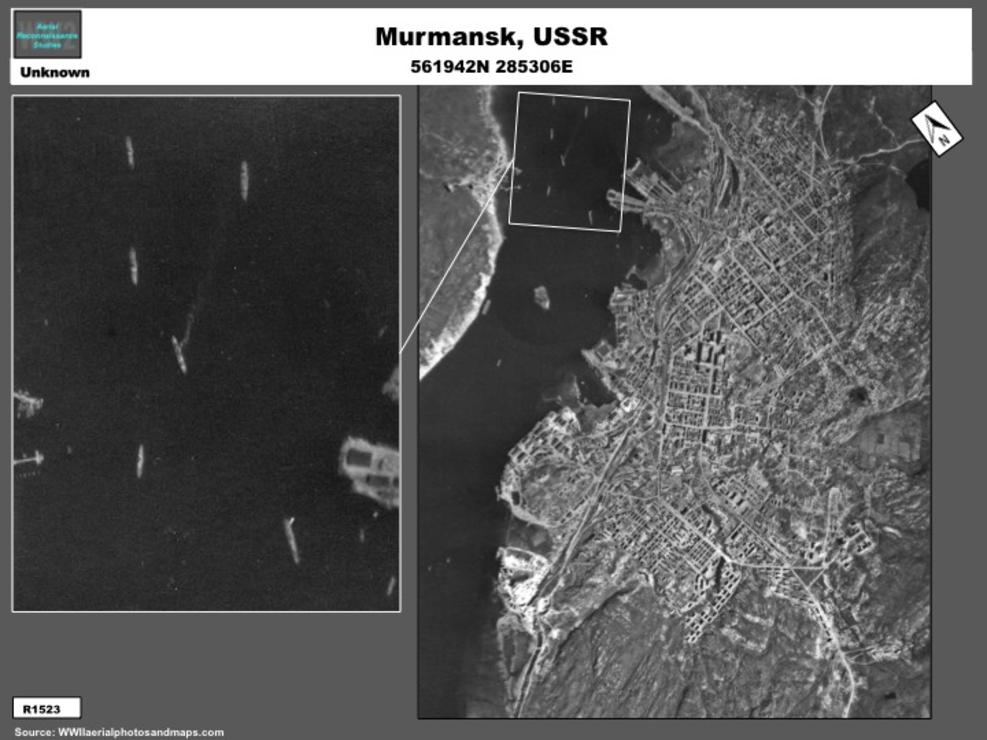 The Germans also monitored smaller ports or transshipment points in the region.  Teriberka, a small settlement on the Barents east of Polyarnyy had a small port and a storage area; the settlement at Shoyna, on the White Sea was even smaller (Graphics 6 & 7.

​The available resources provided coverage of 29 airfields in the Murmansk-Arkhangelsk region; several remain major military bases or airports today (Arkhangelsk 4, 5, and East, Severomorsk, Afrikanda and Monchegorsk) (Graphics 8 - 11).  Arkhangelsk 5 was the only one of the airfields with the all-weather improvements seen at other major bases in the pre-war USSR; it is still a major base.  On 5 June 1944, Afrikanda, still a graded earth strip, showed signs of damage from a recent attack by a single JU-88 (as annotated by interpreters).  Monshegorsk was a well used field with extensive parking areas.  The airfield at Severomorsk was only a dirt strip in 1944. 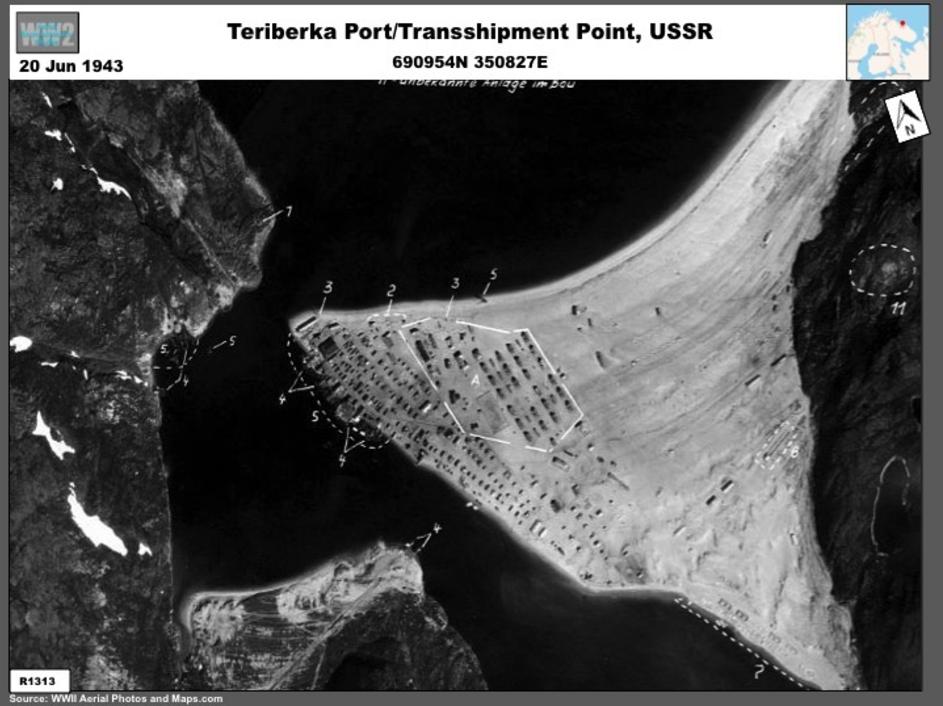 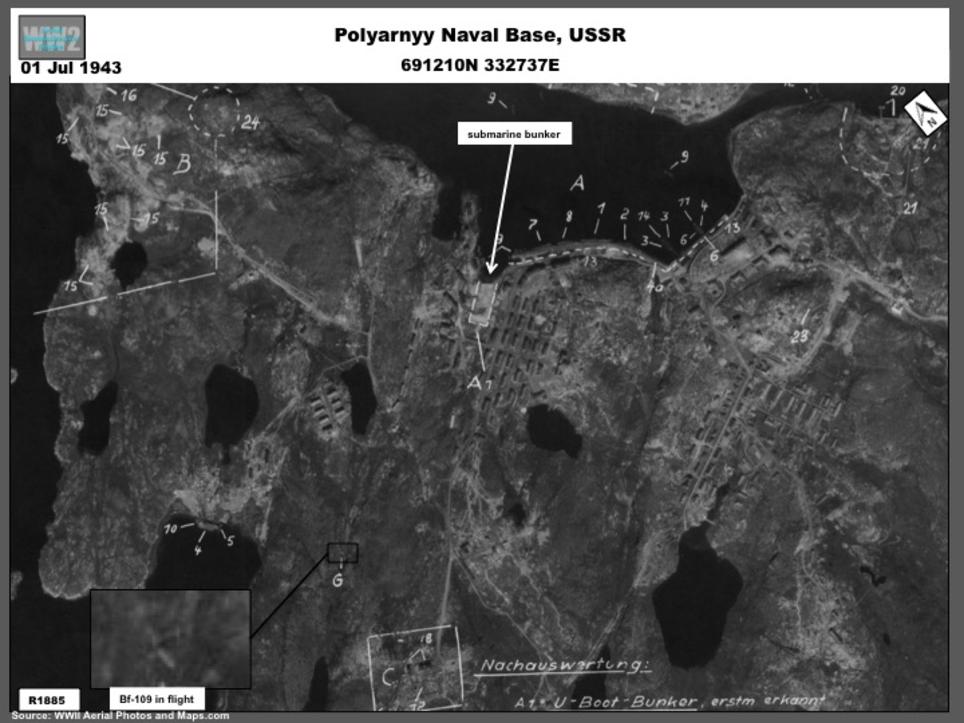