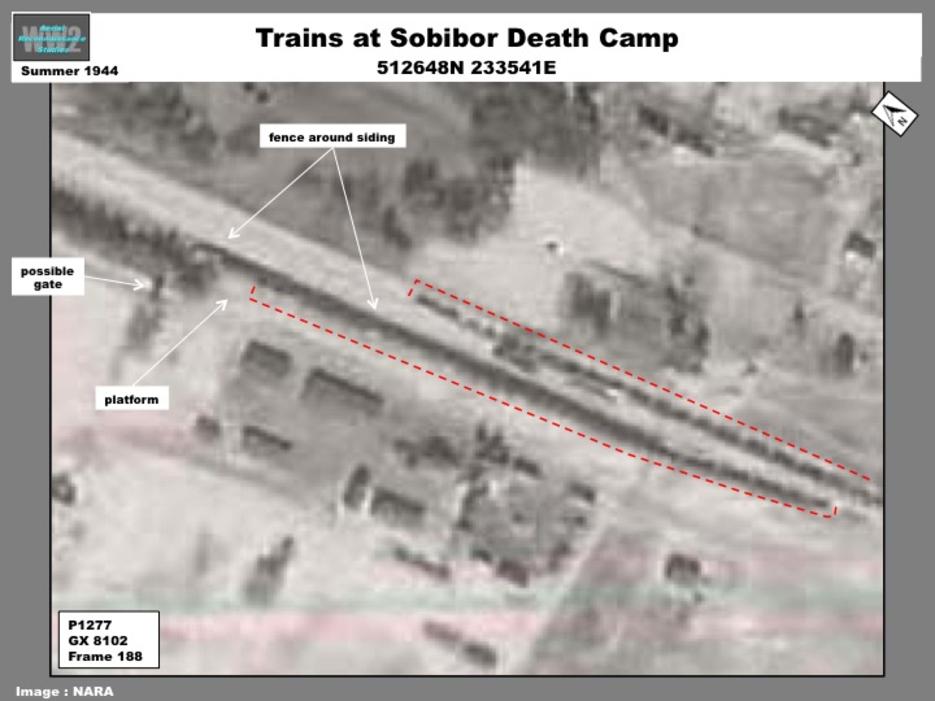 ​A 1944  Luftwaffe reconnaissance image of Sobibor, the infamous death camp in southeast Poland revealed possible ongoing concealment of the site.  The date of the image was not listed, but based on the camp's appearance it was likely taken in late summer, just before the area was overtaken by the Red Army.  Sobibor was closed following a prisoner revolt in October 1943 and dismantlement began soon afterwards. Attempts to conceal the camp activities included the planting of trees and creating new roads. 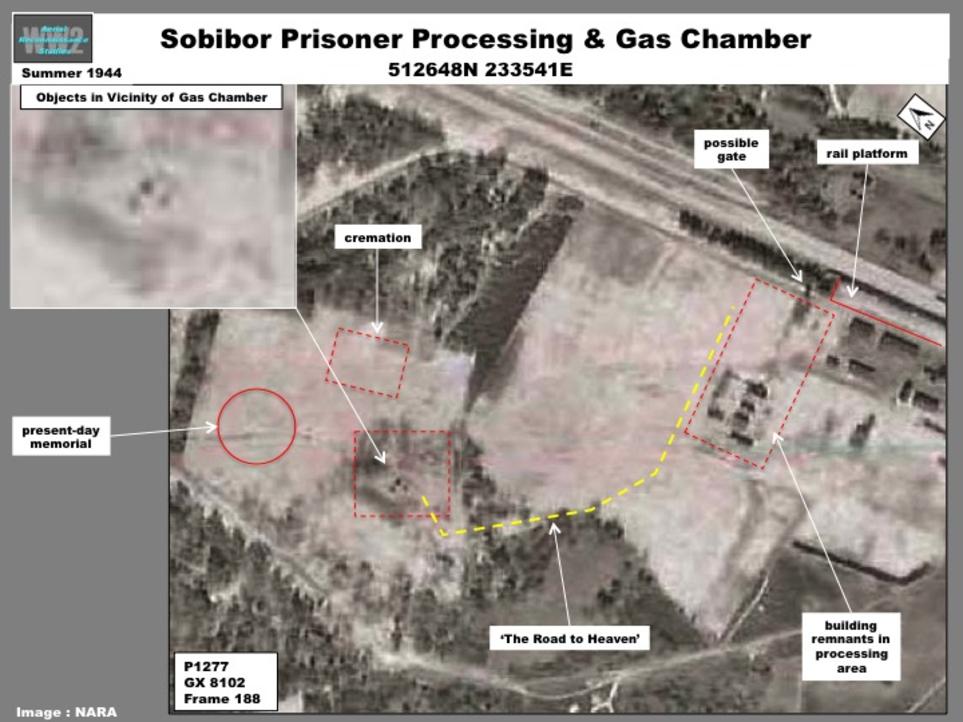 By the time it was imaged, almost all of the camp infrastructure had been removed and leveled, but the facility rail siding was still intact.  No new concealment features had been added.  Notably, a few buildings remained in the staff barracks and prisoner processing areas.  A water storage trench in the former prisoner's bararcks area could still be seen and a possible entry gate to the prisoner processing area may still have been present (Graphics 1 & 2). ​ Three unidentified objects could be seen in the vicinity of the gas chamber location (Graphic 3) 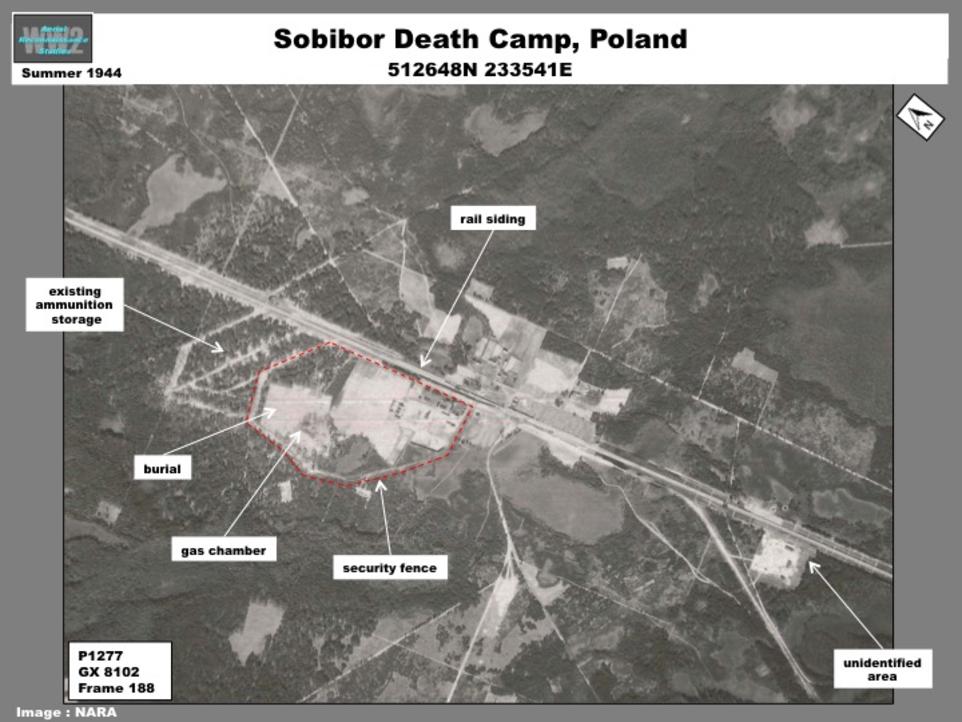 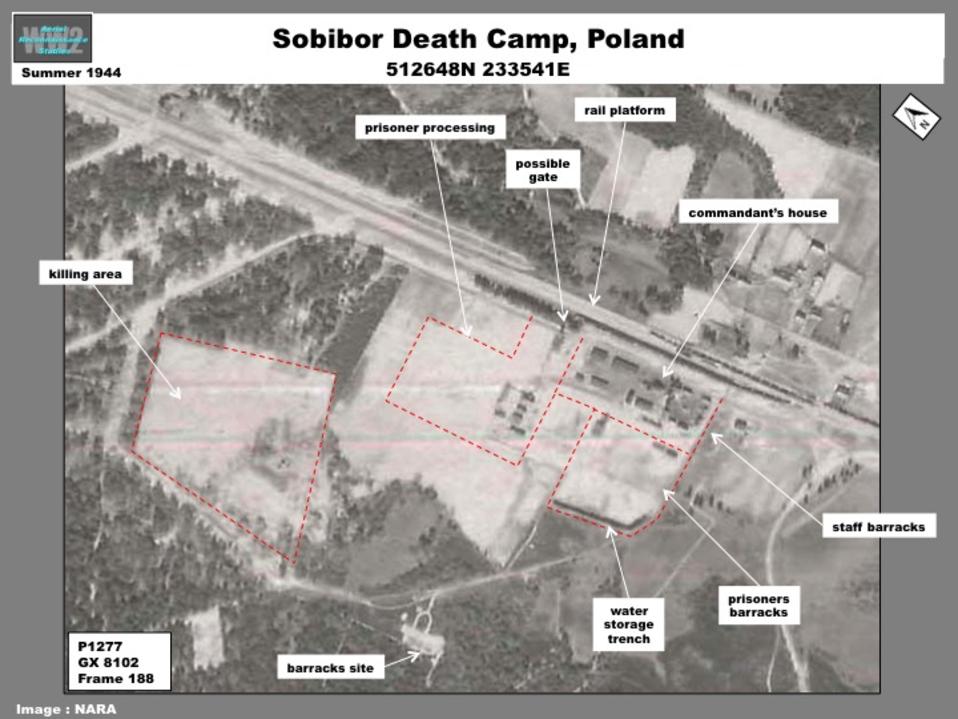 Despite the removal of the camp facilities, the continued presence of trains at the rail siding and in the main yard suggested that the site was still occupied and concealment work was ongoing.  Note that the fence screening the rail siding was still intact (Graphic 4).

Prisoner processing took place immediately.  Upon arrival at the rail platform, prisoners were processed through a series of buildings where their belongings were taken and they were undressed.  Afterwards they were then marched to the killing area along a secured path called 'The Road to Heaven' (Graphic 3). The path terminated at the gas chambers where the prisoners were gassed using carbon dioxide from a large gasoline engine.  Bodies were buried or cremated in an adjacent facility and the remains buried in nearby pits. Interestingly, although the gas chambers had been removed, three large unidentified objects set in a triangular pattern could still be seen in the vicinity .