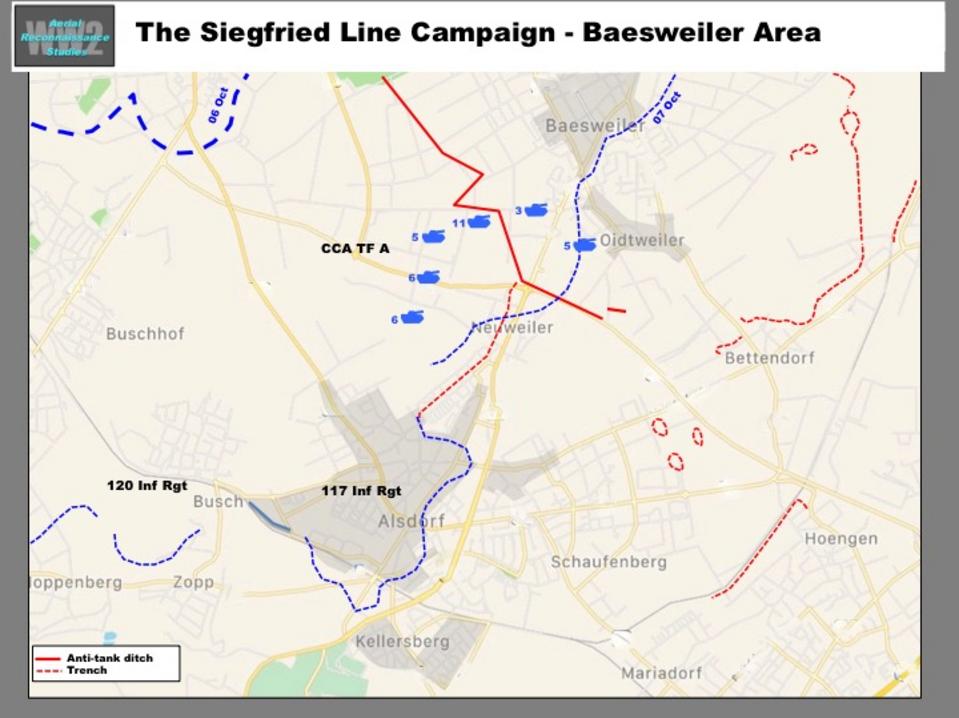 The American plan of attack called for the 2nd Armored Division to operate north and southeast of the starting point in the direction of Waurichen and Baseweiler and the 30th Infantry Division to operate to the south, in the direction of Alsdorf (Maps).  The 8 October imagery covered most of the battlefield from the border fortifications south-southwest of Geilenkirchen to bridgeheads on the outskirts of Immendorf and Oidweiler. Signs of battle, including evidence of vehicular movement and artillery shelling could be seen throughout the area.

To the south, 36 tanks belonging to CCA (Task Force A) could be seen deployed near the front line between Baesweiler and Alsdorf.  This group, just outside Oidweiler, had encountered an anti-tank ditch that had been crossed by eight tanks while others waited on the other side (Graphic 3). 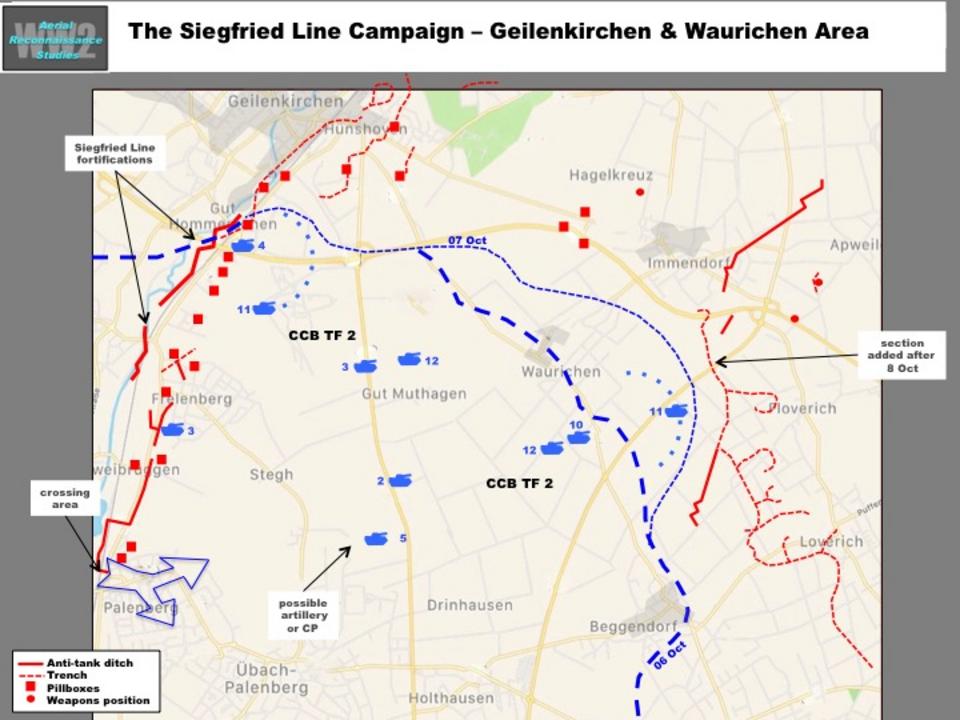 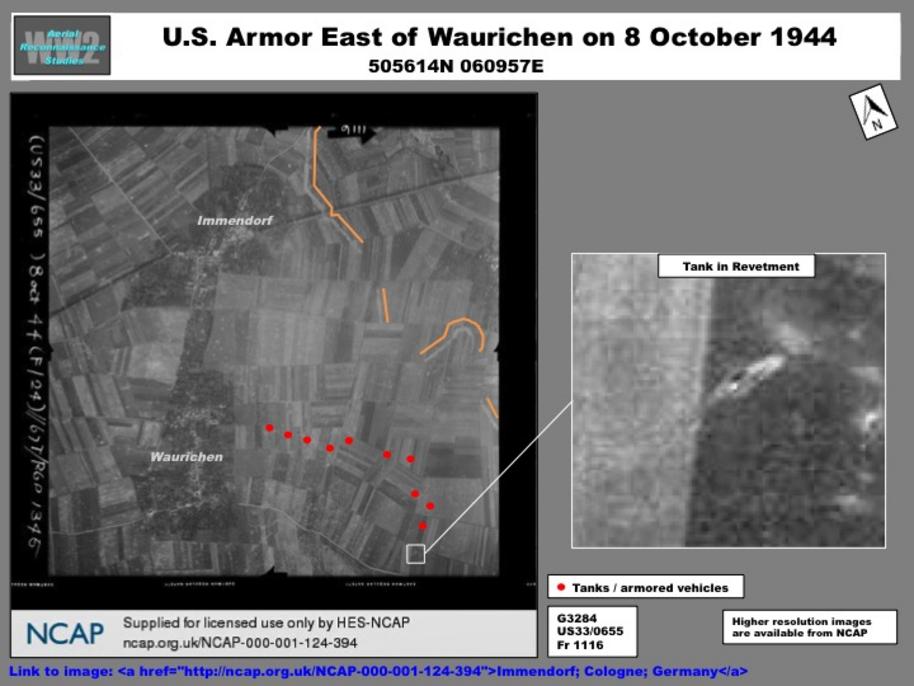 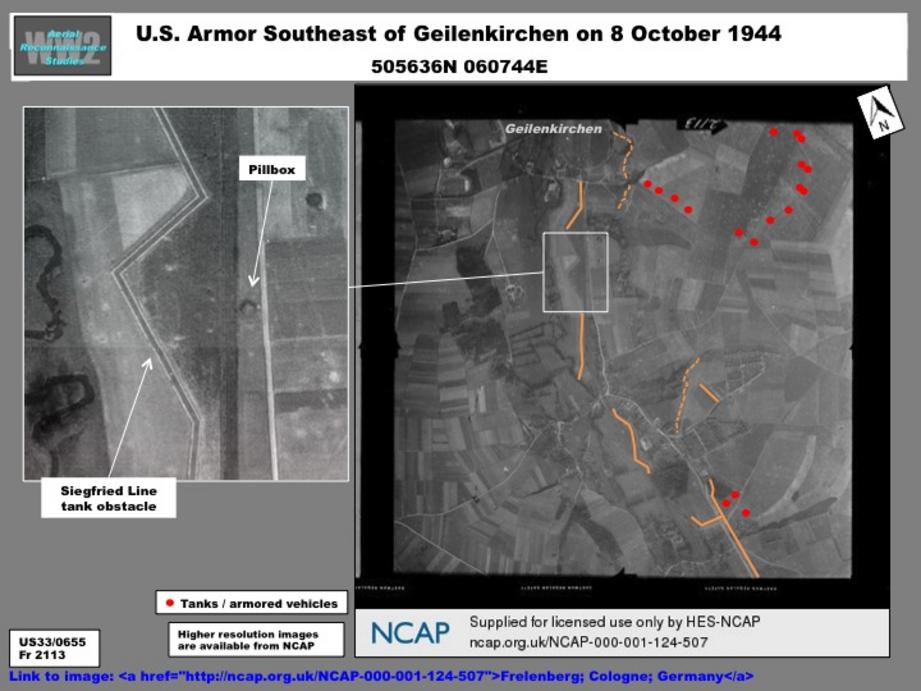 The attack on the Siegfried Line was launched between the towns of  Geilenkirchen and Übach-Palenberg.  In this area the line followed the Wurm River and passed through towns and built-up areas. Fixed fortifications with wire, anti-tank ditches and pillboxes had been supplemented with new personnel and anti-tank trenching (Graphic 1).  On 8 October, 73 tanks belonging to CCB were observed between Geilenkirchen an Waurichen.  Two groups of tanks were deployed in arcs that defined the front lines: 15 tanks from CCB Task Force 1 were deployed immediately south of Geilenkirchen and 11 from Task Force 2 were east of Waurichen (Graphic 2).  Twenty-two other tanks near the latter group were deployed in defensive formations. Most of the tanks deployed near the front were deployed in prepared revetments. 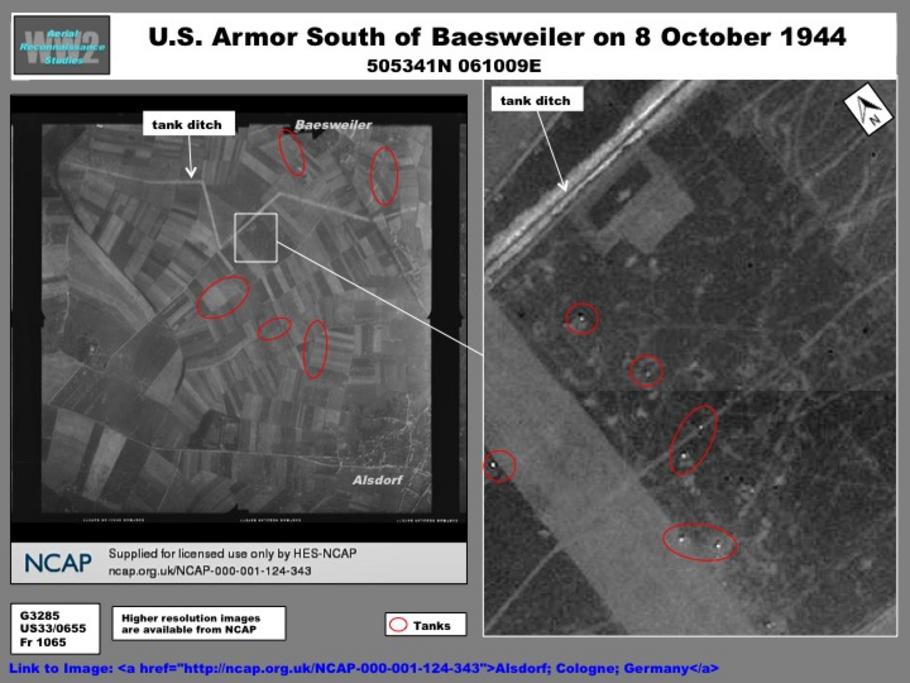 On 3 October 1944 elements of the U.S. Army 2nd Armored Division and 30th Infantry Division launched the attack on the Siegfried Line (Westwall) in the vicinity of Geilenkirchen. The offensive concluded on 7 October with the American front line up to 7 kilometers from the starting point.  On 8 October more than 100 armored vehicles belonging the 2nd Armored Division's two Combat Commands (CCA & CCB) could be seen at bridgeheads in the vicinity of Geilenkirchen, Waurichen and Alsdorf.  From these positions on 16 November, the U.S. Army began the Roer River Offensive that carried the Americans past the last major obstacle before the Rhein.  All non-imagery information in this article comes from The European Theater of Operations: The Siegfried Line Campaign, Chapter XI; Aset Attack Against the West Wall (pages 251-269); published by the U.S Department of Defense (1963).