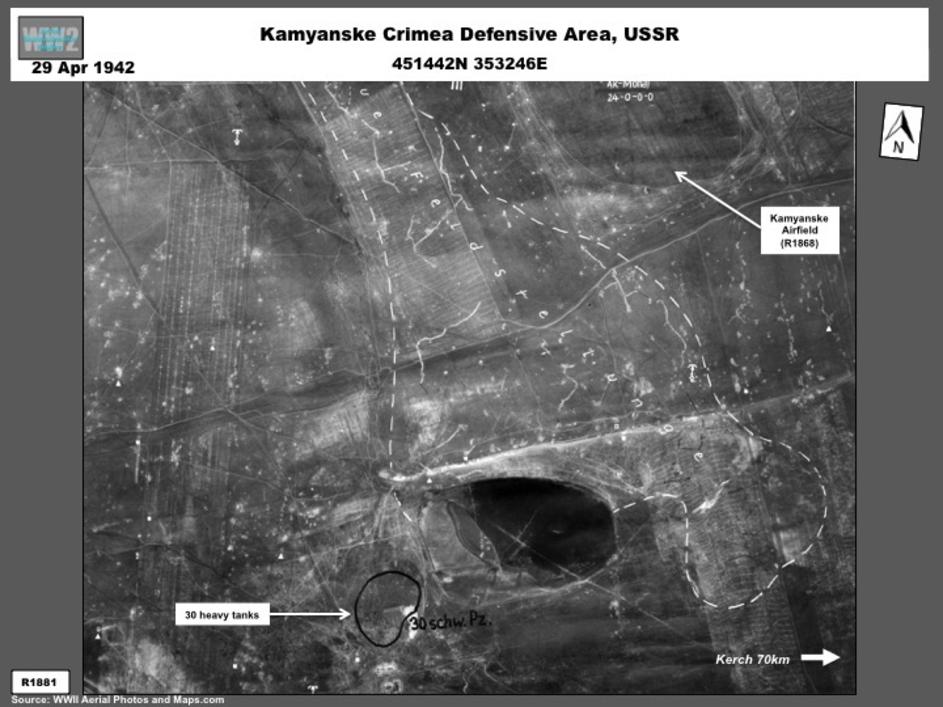 By the end of ther 2nd Siege, the destruction of Sevastopol was virtually complete.  Images from August 1943, below show the naval base, a fuel depot and the headquarters of the Black Sea Fleet, all of which were more or less intact on 5 May.  However, Sevastopol continued to be an important Axis base, as the presence of four U-Boats at the entrance to Sevastopol harbor shows (Graphic 6). 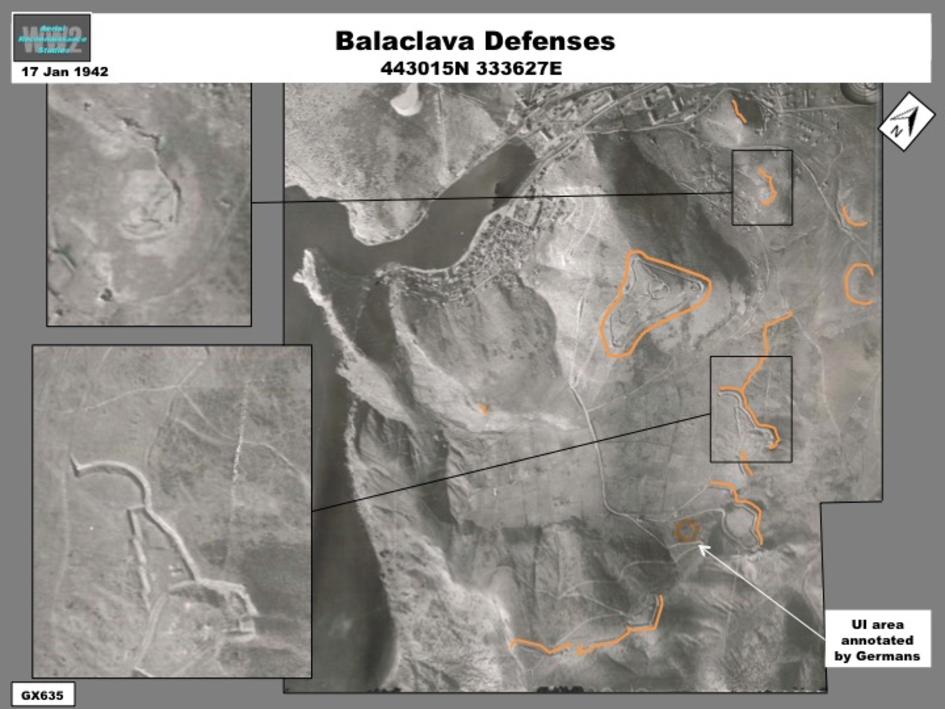 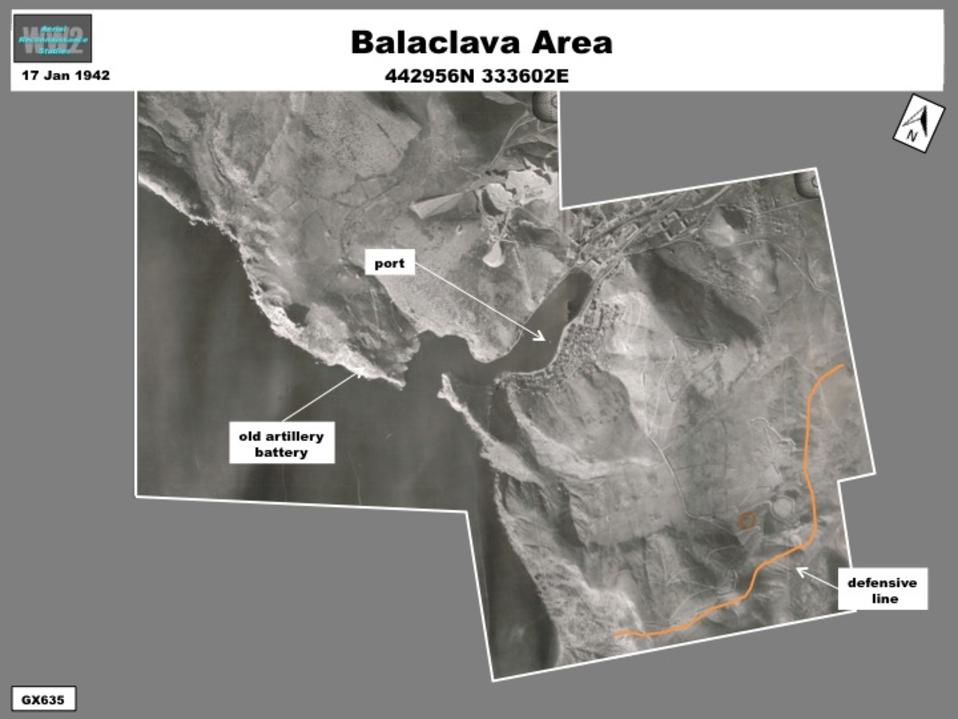 The port and naval base at Balaklava, 15 km southeast of Sevastopol, represented the southernmost extent of the Axis advance.  In contrast to Sevastopol Balaklava had suffered little damage as of 17 January 1942. The defensive line southeast of the port appeared to employ old positions, but new trenching and weapons positions could also be identified. 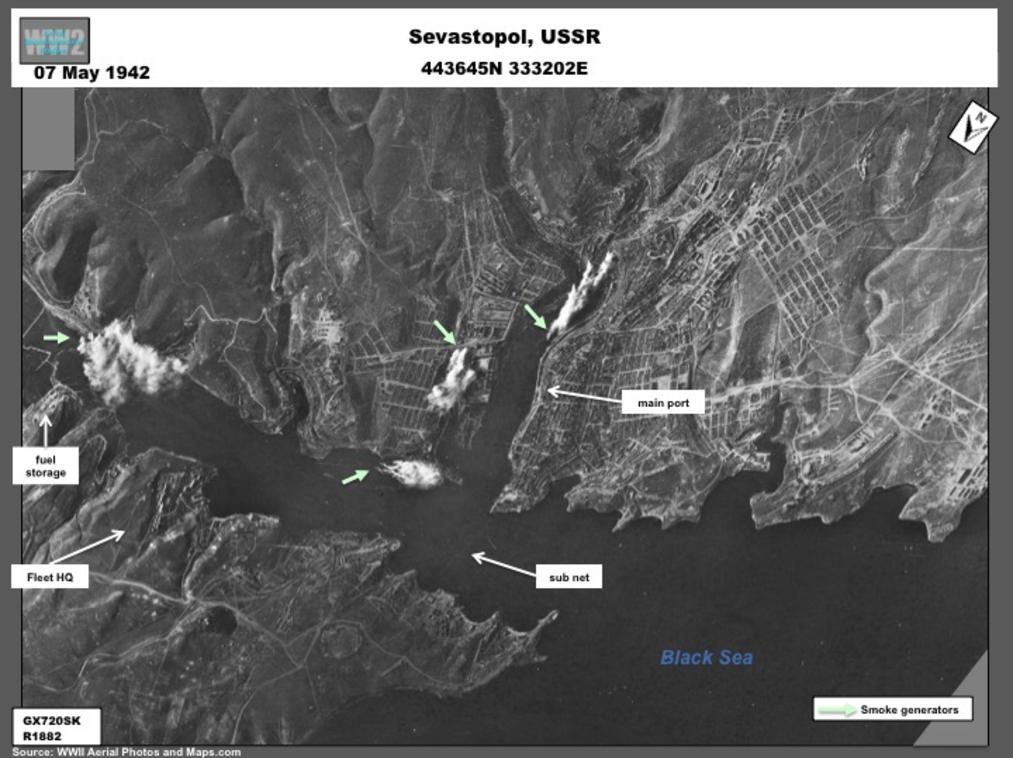 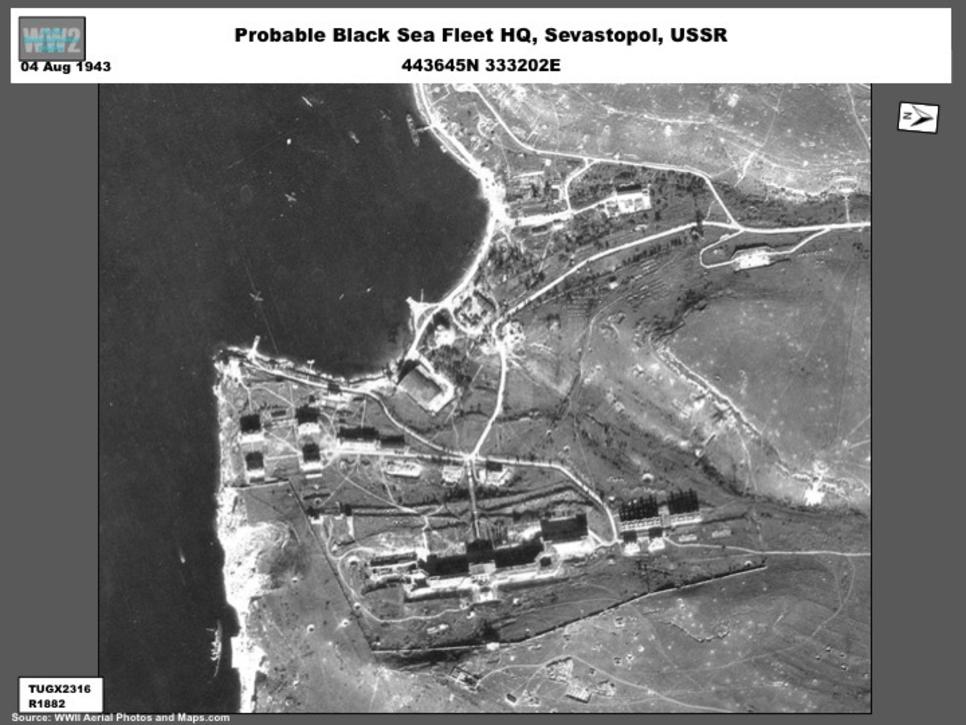 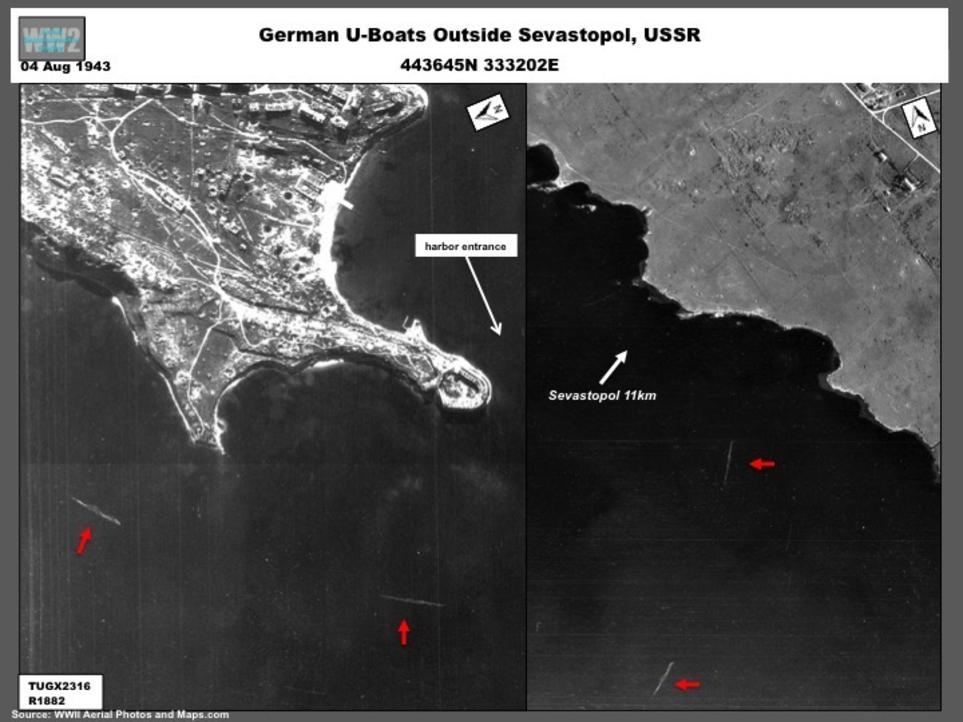 Simferopol, another major city in the Crimea, was covered by Luftwaffe reconnaissance sometime before it's fall in November 1941.  The city had a number of major military installations, including the cavalry or artillery barracks below (Graphic 10).  The barracks is a good example of how reliant pre-war militaries were on the horse; equime exercise areas can be seen throughout the installation and horses  were in a fenced area the southwest side of the barracks. 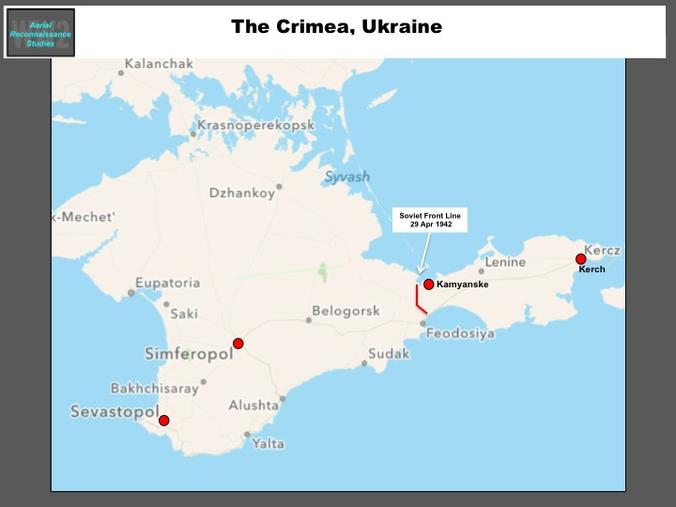 Back to Ukraine USSR 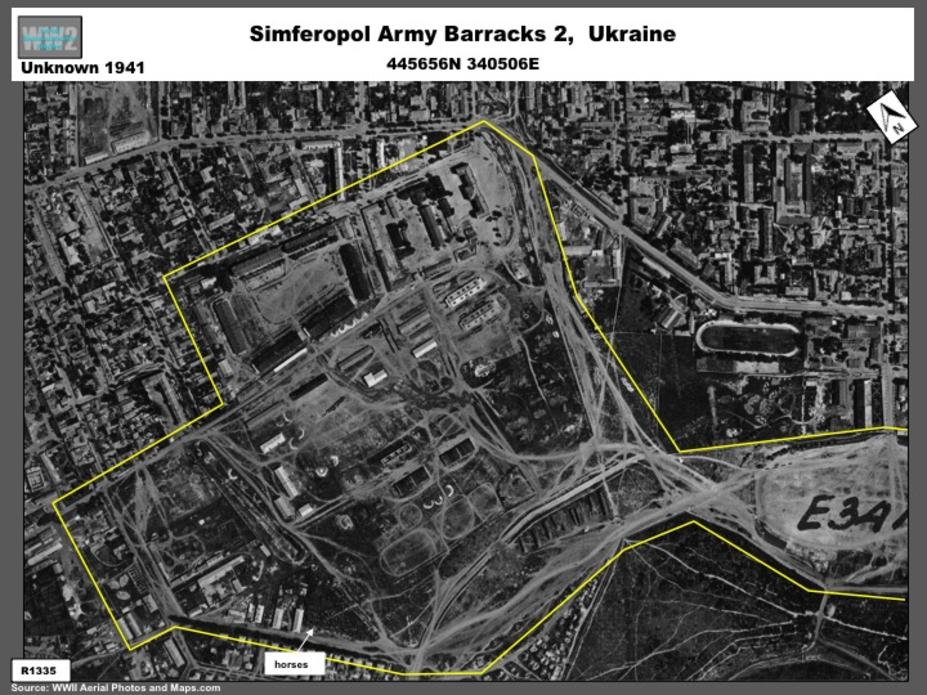 The entrance to Sevastopol harbor was defended by coastal artillery fortresses, including Maxim Gorkiy I and II -- Batteries 30 and 35. Although it was heavily bombed bombed by the Luftwaffe, Battery 30 was not put out of action until 6 June 1942, when the two main guns received direct hits from German heavy artillery; Battery 35 was overrun on 4 July.  Graphic 2 below shows Gorkiy I before and after the guns were put out of commission.

Axis forces reached the Crimea in the autumn of 1941, taking the entire peninsula except for the heavily defended port city of Sevastopol.  After failing to take the city in an offensive that lasted between October and December 1941, the Axis prepared for a siege (the 2nd Offensive), which began on 7 June 1942 and ended with the capture of the city on 4 July.  Graphic 1 shows the main port area of Sevastopol on 7 May 1942 a month before the 2nd Offensive.  Smoke generators were in operation in an attempt to obscure the city and port facilities from observation.  The city was largely intact and a submarine net could be see across the entrance to the port. 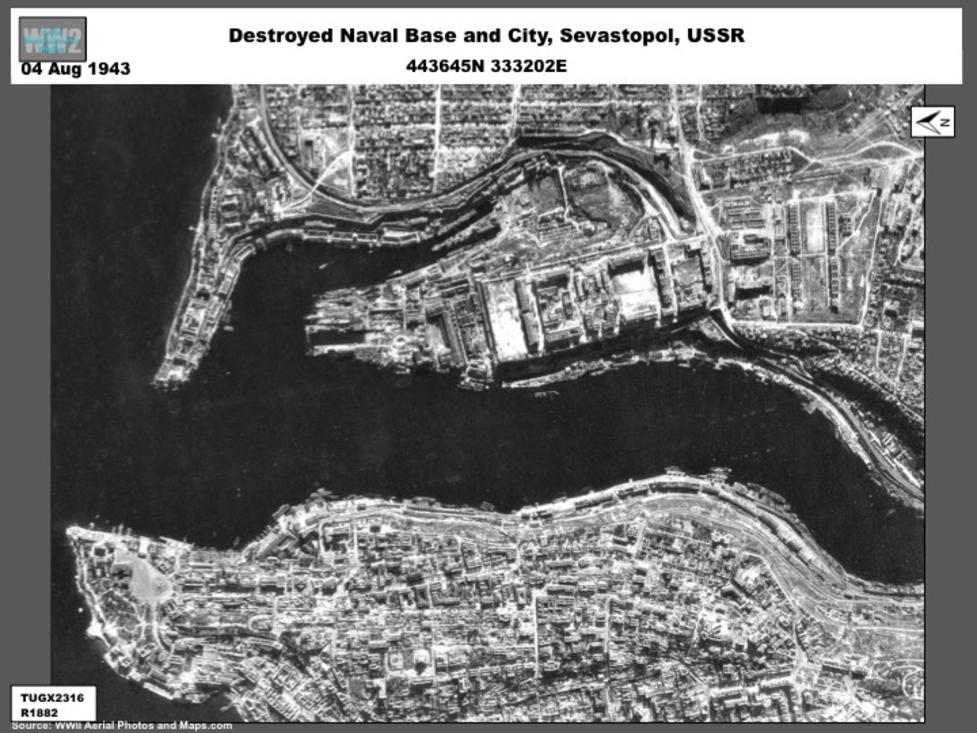 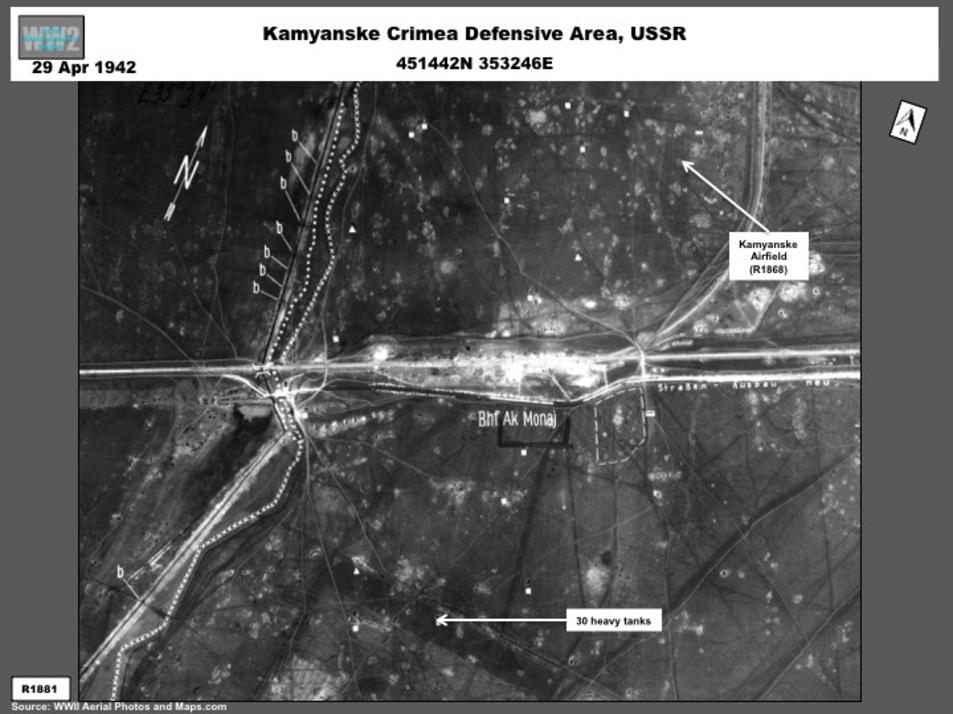 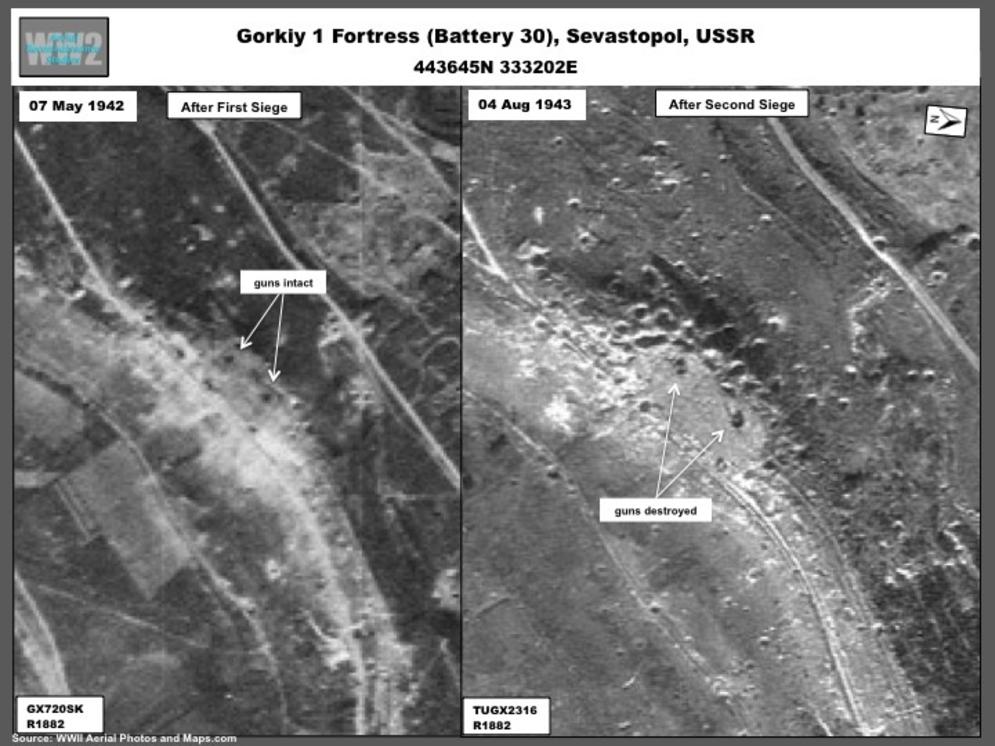 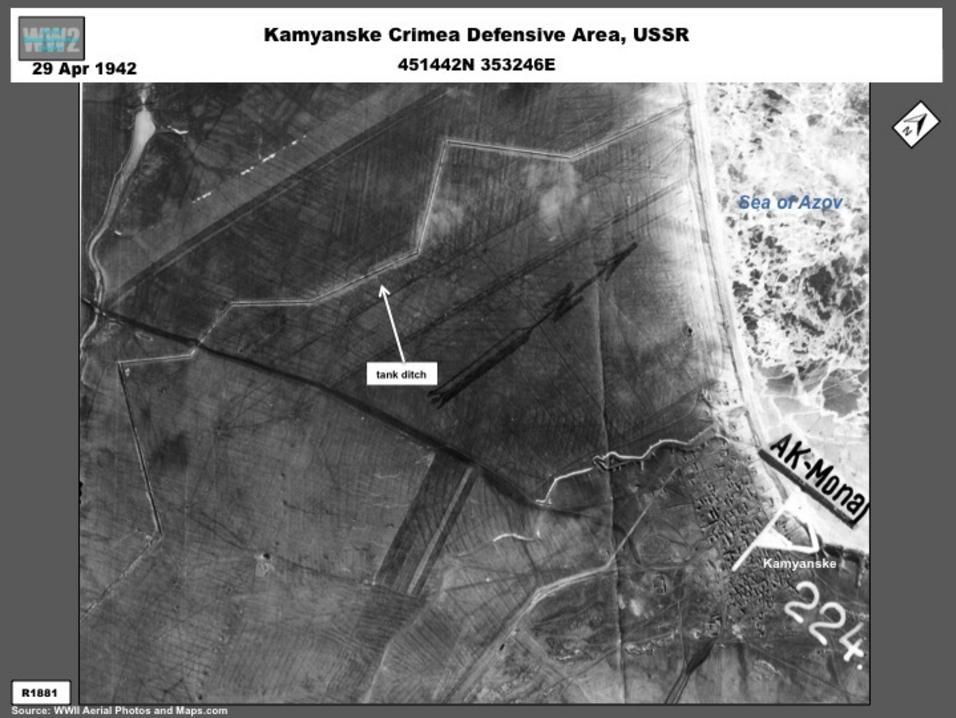 Between 26 and 31 December 1941, the Soviets launched an amphibious assualt on the Kerch peninsula (Map) to relieve Sevastopol; they were able to sustain the bridgehead until May 1942, when the Axis launched a counteroffensive.   On 29 April 1942 Luftwaffe reconnaissance covered the Soviet front lines in the vicinity of Kamyanske (Ak-Monaj) on the shore of the Sea of Azov (Graphics 10 - 12)​ show Soviet defenses, including concentrations of heavy tanks annotated by interpreters. 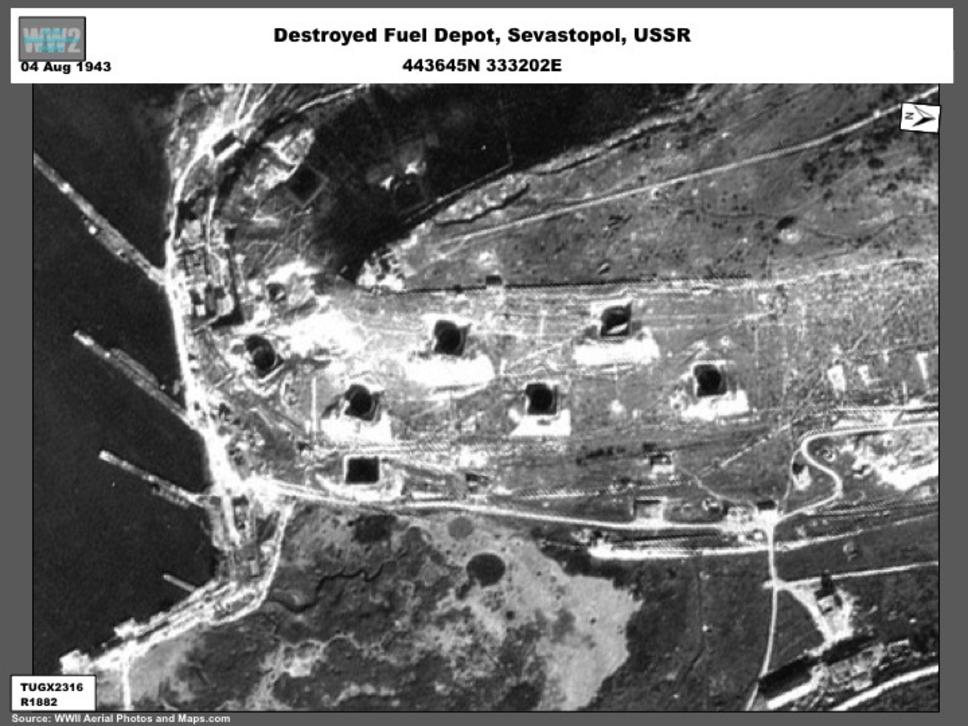 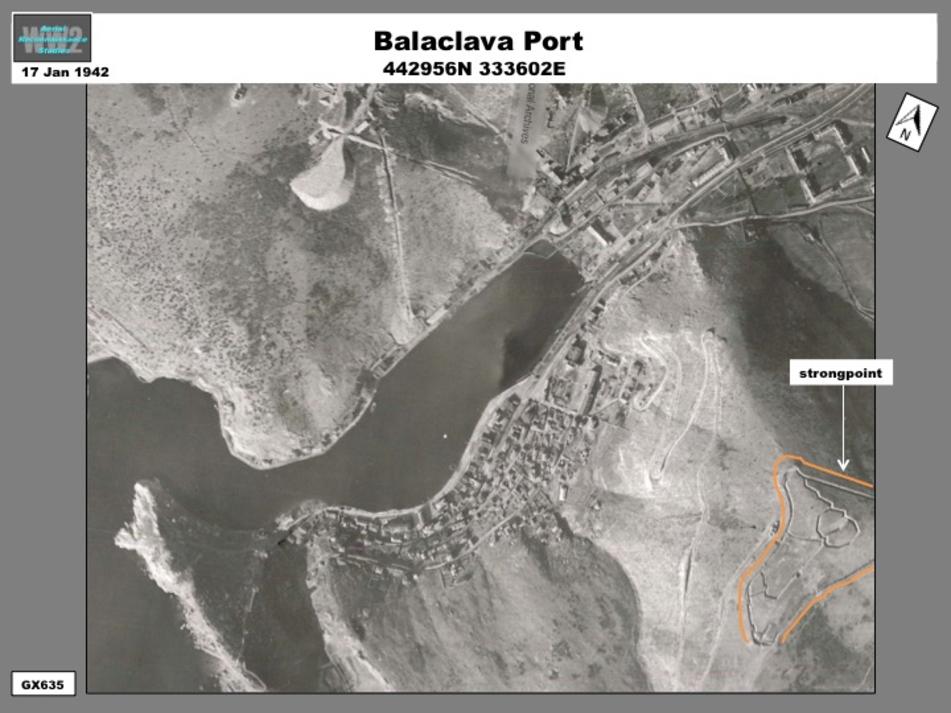