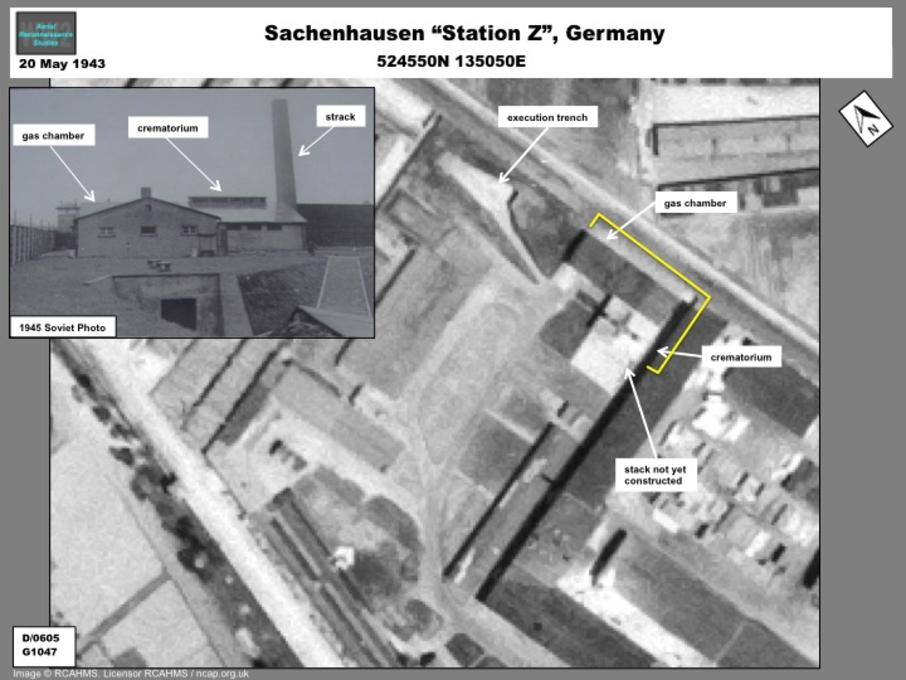 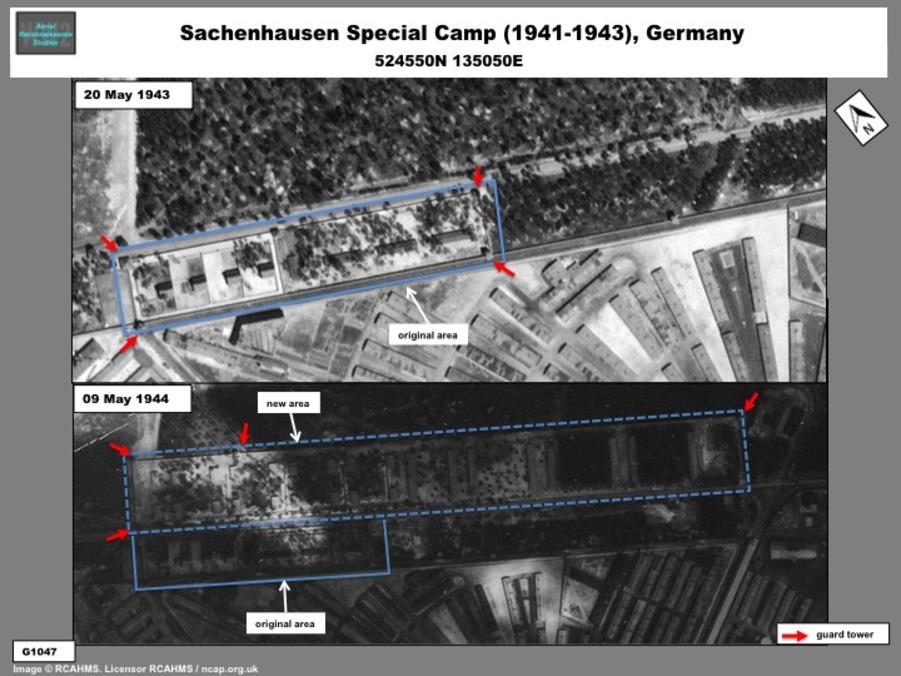 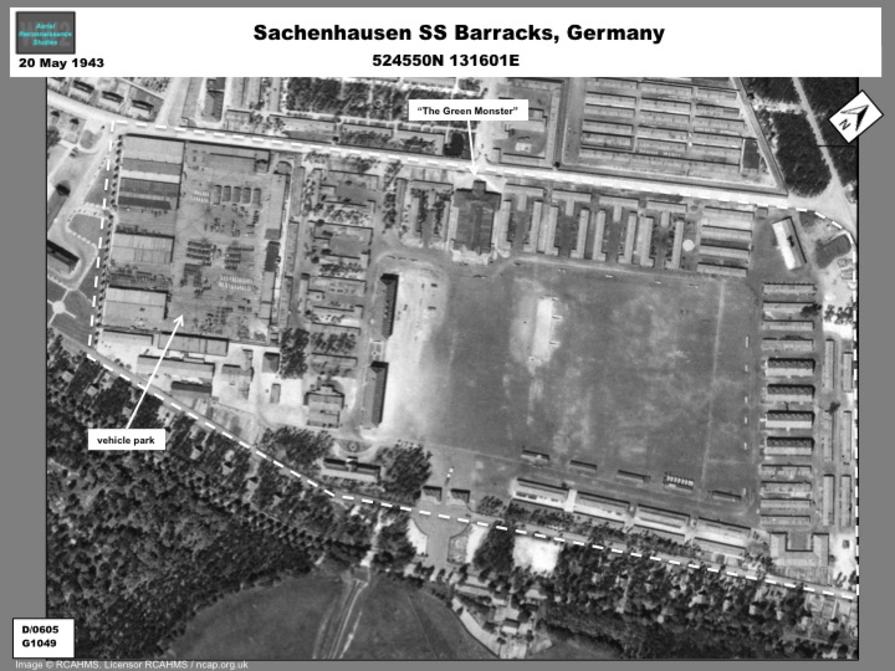 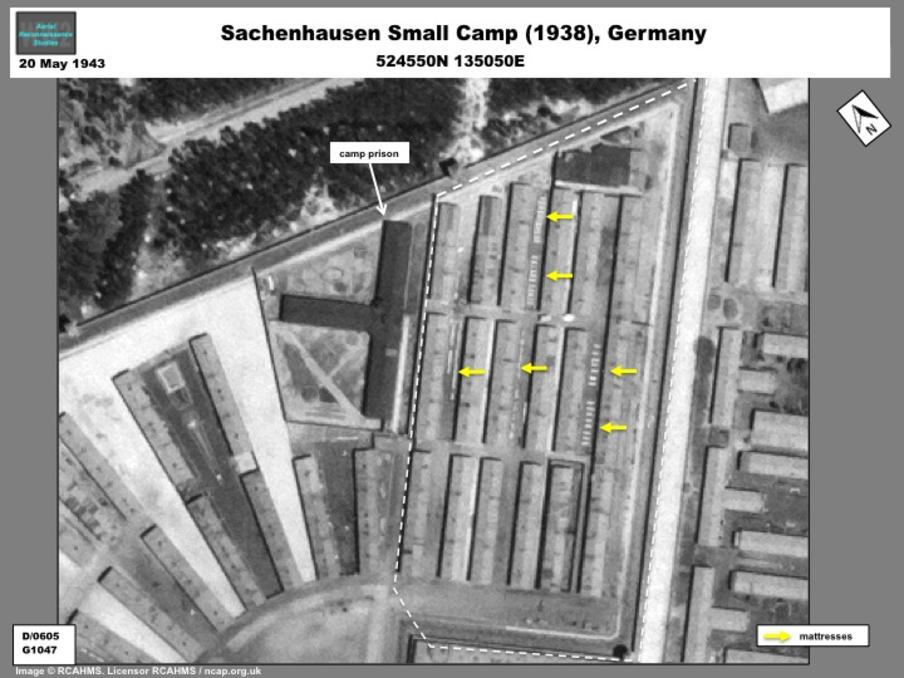 This series of graphics show the Sachsenhausen Concentration Camp complex as it appeared on 20 May 1943.  Little about Sachsenhausen, is unknown, so these serve only as an overview of complex, including: the Original Camp (1936), the Small Camp (1938), the Workshops annex (1939), the Special Camp (1941-1942), the execution Area, Station Z (1942-1943), the SS Barracks, and the SS-Concentration Camp System Administration HQ (Graphics 1 - 7).  A few points of interest worth mentioning include: in Station Z, the crematory’s stack had not yet been constructed, indicating the facility was not yet operational (Graphic 3); mattresses were being aired beside barracks in the Small Camp (Graphic 4) and finally, a comparison between May 1943 and May 1944 shows how the Special Camp --which housed POWs and special prisoners-- was expanded (Graphic 5). 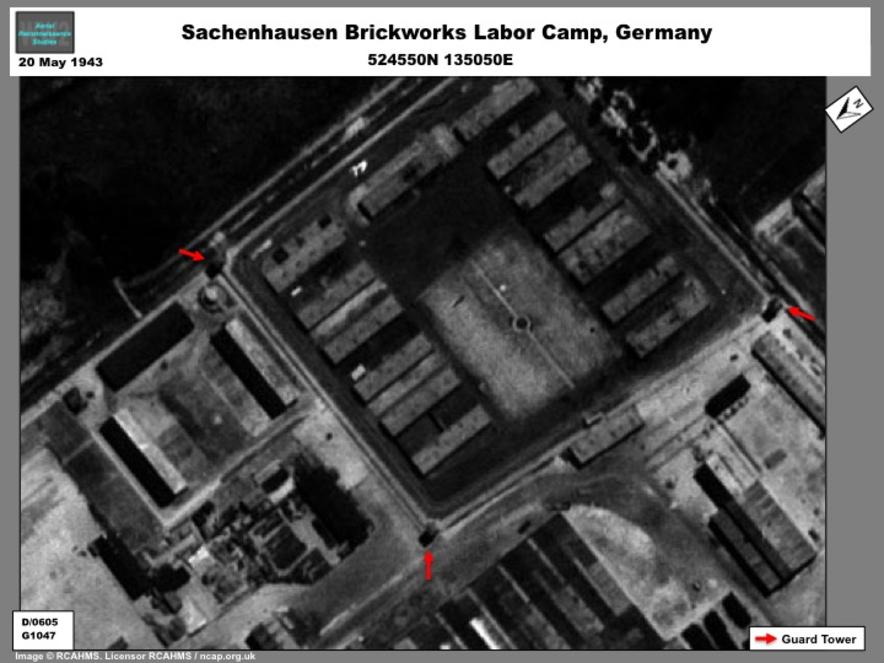 The same sortie imaged a Sachsenhausen sub-camp (Zweilager [KZ]) at Glöwen, a small town 80 km west-northwest of Oranienburg (Graphic 11). The Glöwen camp, occupied by prisoners from around the Reichand eventually women from Ravensbrück, supported an unfinished munitions production and storage complex near the town of Nitzow known as "Dynamit-AG,"  The coverage showsthe camp had two larger barracks areas, one of which had been removed.

On 14 April 1945, a USAAF reconnaissance sortie imaged the Sachsenhausen/Oraienburg area, providing excellent coverage of the concentration camp.  People could be seen scattered around the camp, but a formation of troops or prisoners was just inside the main gate (Graphic 10); several probable vehicles were parked along the road in front of the camp.  Except for bomb shelters scattered throughtout the the complex and a few missing barracks in the north part pf the camp, the only major change was a new section of the "special camp" (under construction 9 May 1944).  The new area included some animal pens.  Elsewhere, the Brickworks appeared to have been bombed, but the camp annex appeared to have been removed sometime before. Also of interest, three piles of unidentified material were burning in the ruined loading area of the bick plant. 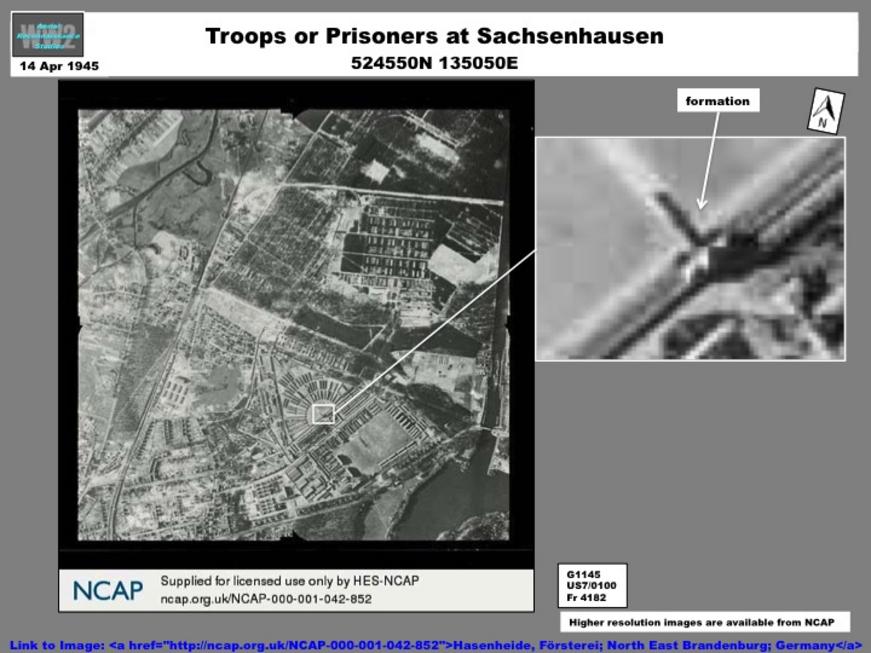 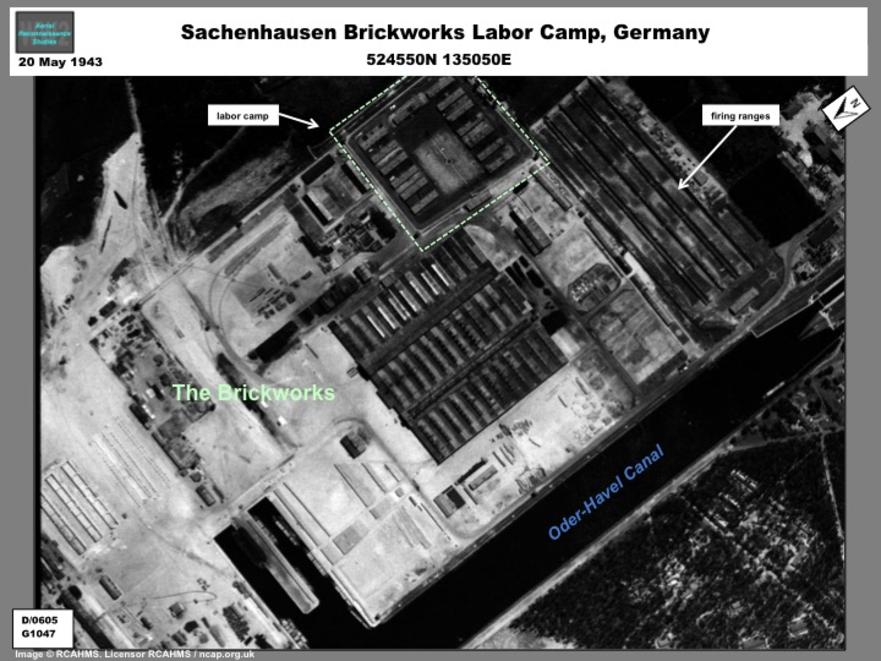 Sachsenhausen had a number of satellite camps. One of them (Graphics 8 & 9) supported a large brickworks was located nearby across the Oder-Havel Canal to the northeast of the camp.  At the time the brickworks was the largest in Germany, being served by its own small port.  Note the firing ranges for the SS barracks. 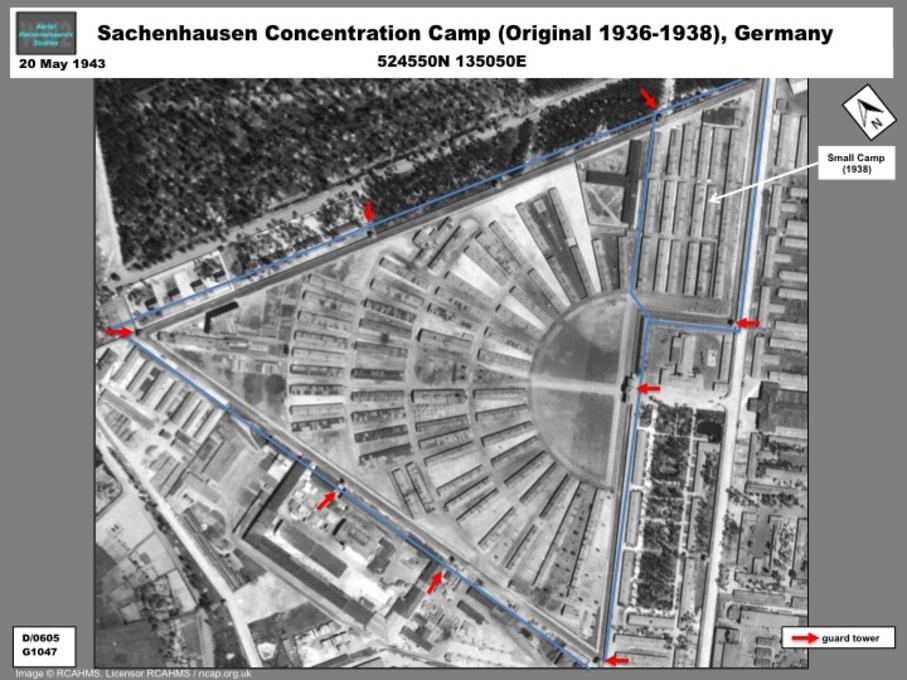 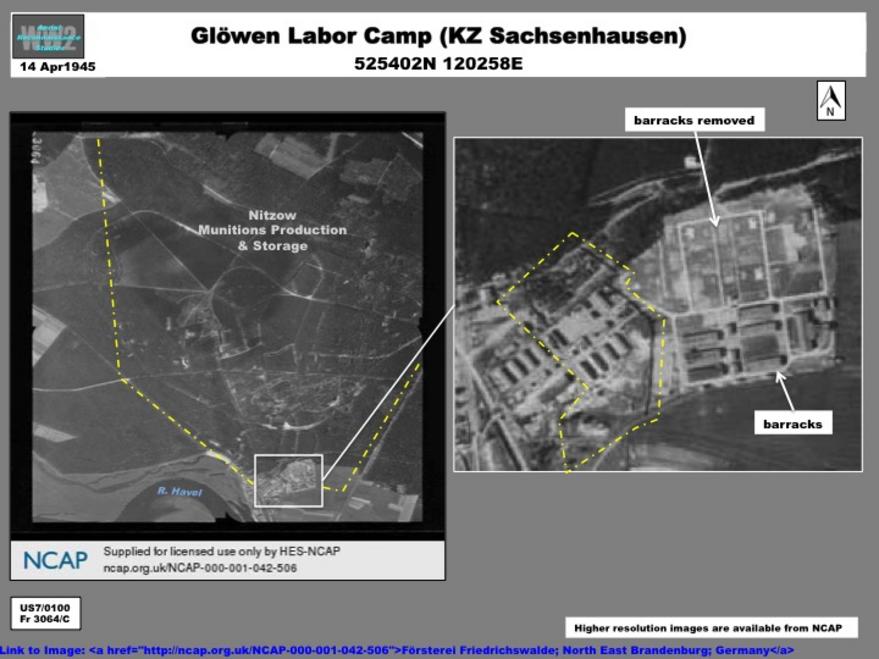 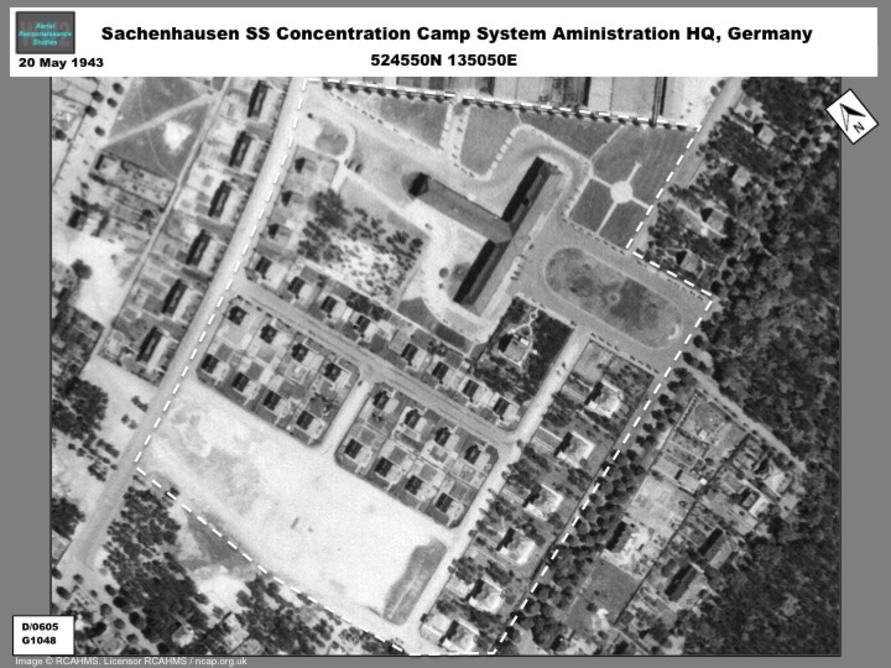 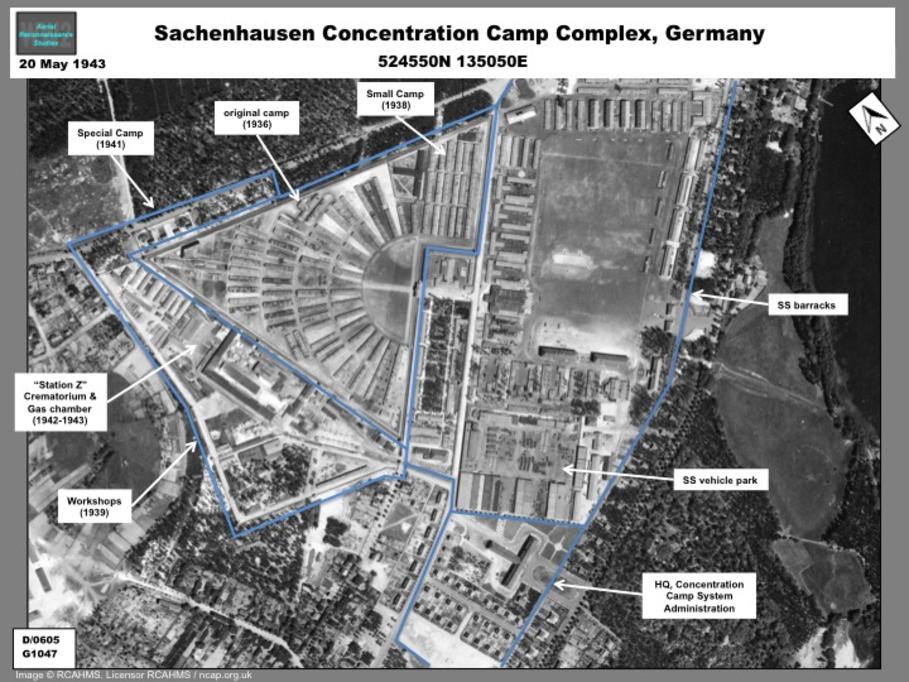