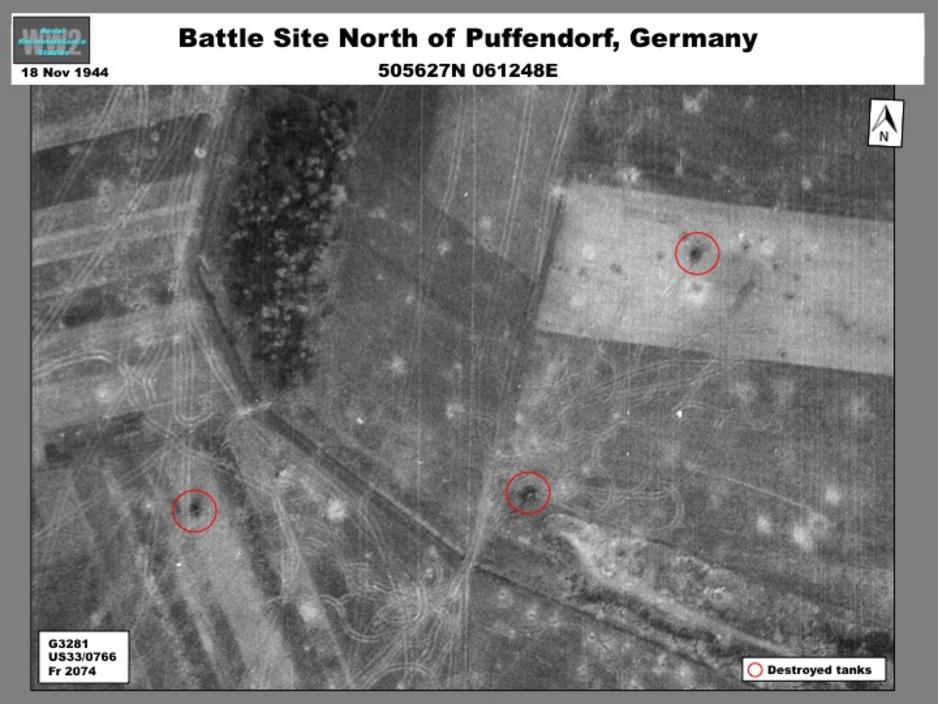 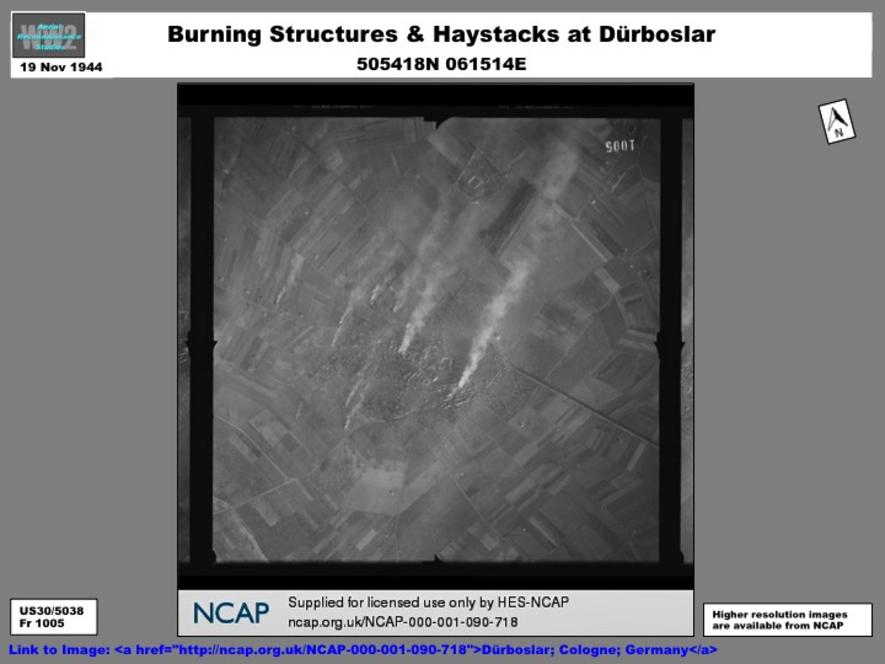 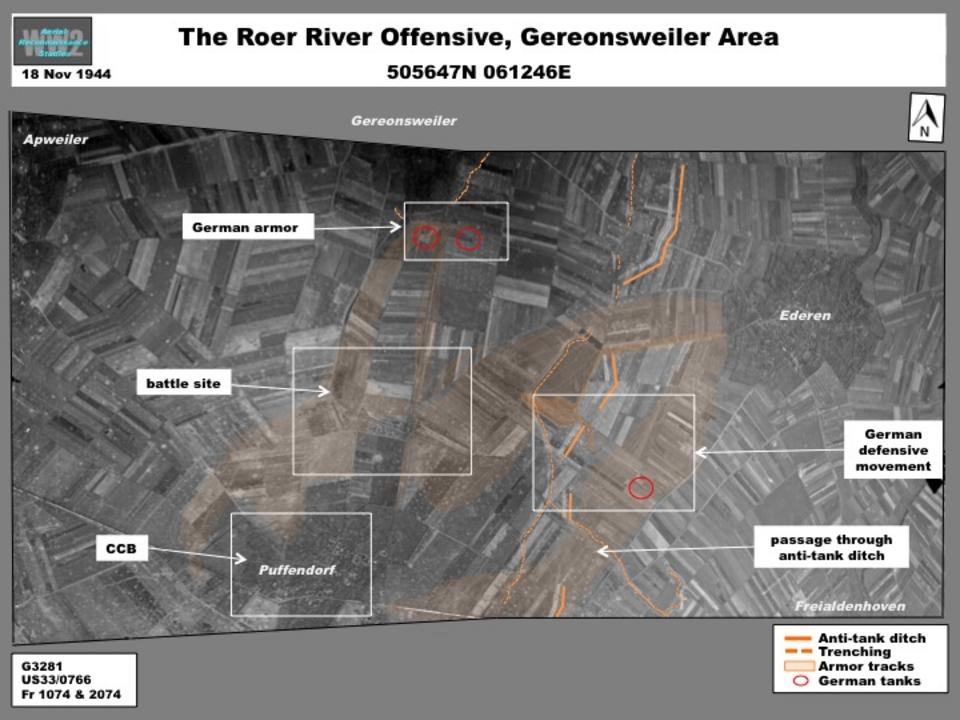 Siersdorf, 2 km southeast of Setterich, was one of the original objectives of the offensive (Map2).  Defenses at the village had turned back attacks by the U.S. 115th and 175th Infantry Regiments on 16 and 17 November.  On the 18th, the infantry, backed by tanks from the 747th  Tank Battalion managed to take Siersdorf and a coal mine north of the village where German defenders made a stand (Graphics 11 & 12).  Neither Siersdorf or the coal mine were imaged on the 18th, but two sets of vehicle tracks originating from Baesweiler showed the direction of attacks against the village.

​​Siersdorf and neighboring villages of Dürboslar and Schleiden were imaged 19 November showing a continuation of the offensive. Buildings and haystacks were burning in and around all three (Graphics 12-14).  Armor tracks originating from the coal mine showed the route of attack into Dürboslar.

The German defenses encountered by the American units consisted of village strongpoints connected by a network of trenching running west of the Roer River and centered on the town of Jülich, where a bridgehead was to be established (Maps).  The defensive network had numerous weapons positions, but the most formidable of the fixed defenses was a five-kilometer-long anti-tank ditch. The heaviest defenses were concentrated at the village strongpoints where mobile equipment and infantry were deployed. The strongest defenses were to be found at Gereonsweiler, where armor from the 9th Panzer Division could cover approaches from the west and south.

Elements of the U.S. Army 2nd Armored Division, 29th Infantry Division and German 9th Panzer Division were imaged by American reconnaissance on 18 November 1944 in the final stages of the Siegfried Line Campaign.  Begun two day before, the Roer River Offensive had brought the units into contact at the villages of Apweiler, Gereonsweiler and Setterich, where the U.S. advance had stalled.  In addition to vehicle deployments, analysis of the imagery revealed evidence of fighting and the layout of defenses. Limited coverage on 19 November showed continuing U.S. operations around Siersdorf.  All information in this article comes from The European Theater of Operations: The Siegfried Line Campaign, Chapter XXII; The Roer River Offensive (pages 516-540); published by the U.S Department of Defense (1963).

​The weather over the Roer plain was a constant problem for the Americans in November, creating muddy, nearly impassable fields and limiting air support.  November 18th was one of only two rain-free days during the month.​​ 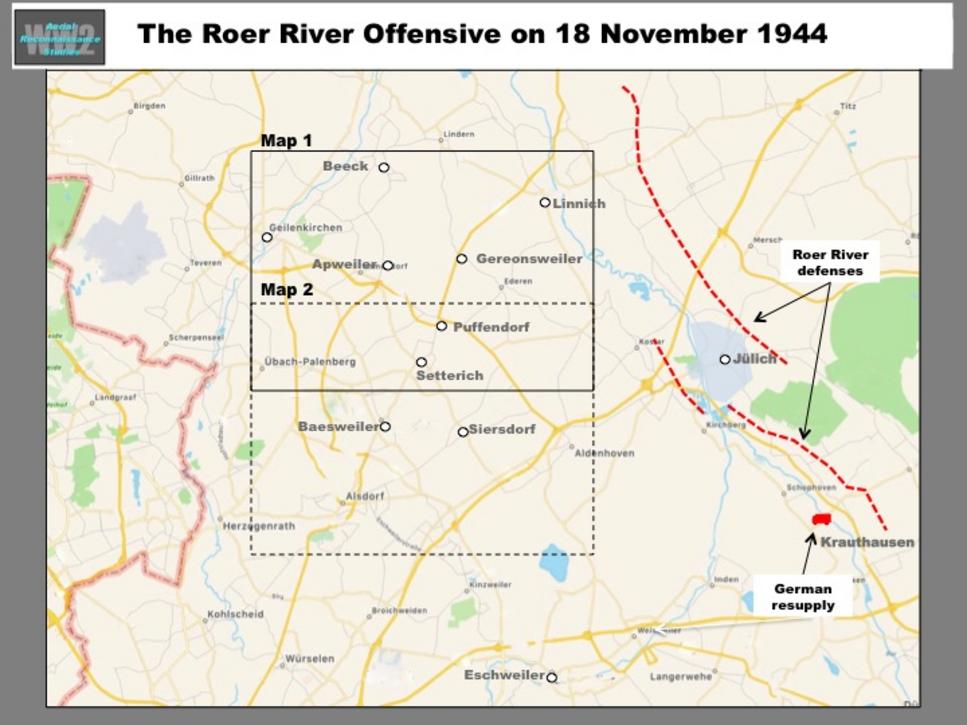 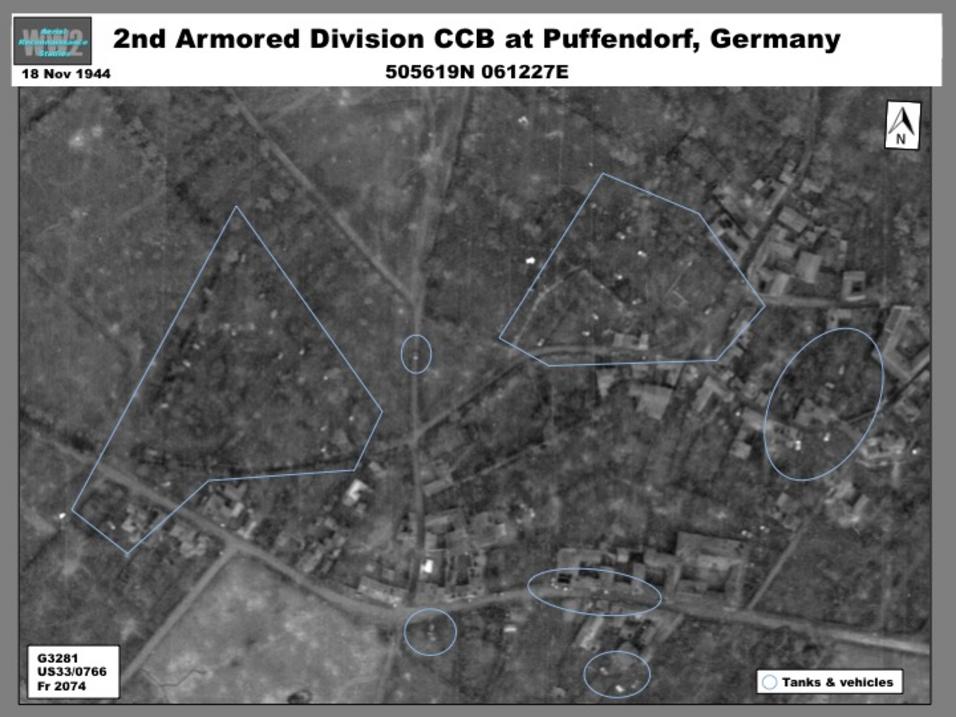 At Gereonsweiler, 1.6 km north Puffendorf, two German tanks of the 9th Panzer Division were deployed in key positions on the outskirts of the village (Graphic 6).  The tanks were sited for a clear view to the northwest, southwest and south.  Elsewhere, a total of three other German armored vehicles were deployed outside Beeck and Freialdenhoven.

The 18 November imagery also covered the Roer River from the vicinity of Linnich to the village of Krauthausen, six kilometers southeast of Jülich.  Evidence of German resupply could be seen at Krauthausen, where 15 vehicles --most headed southwest-- were passing over an intact road bridge.  The main road bridge at Jülich had been destroyed by pre-offensive bombing but had possibly been repaired; another light road bridge was intact. 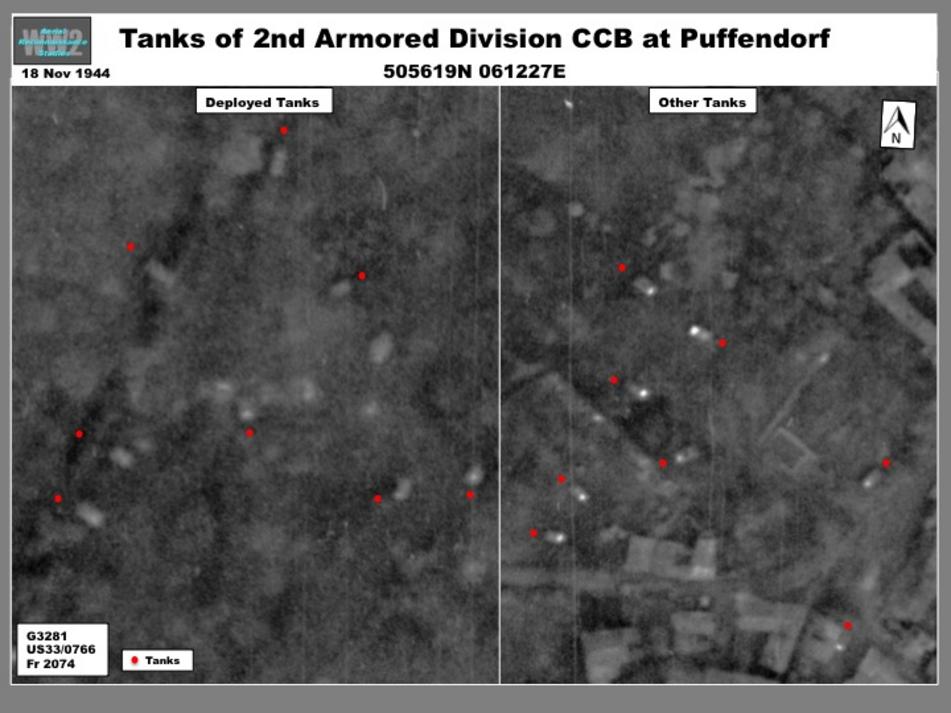 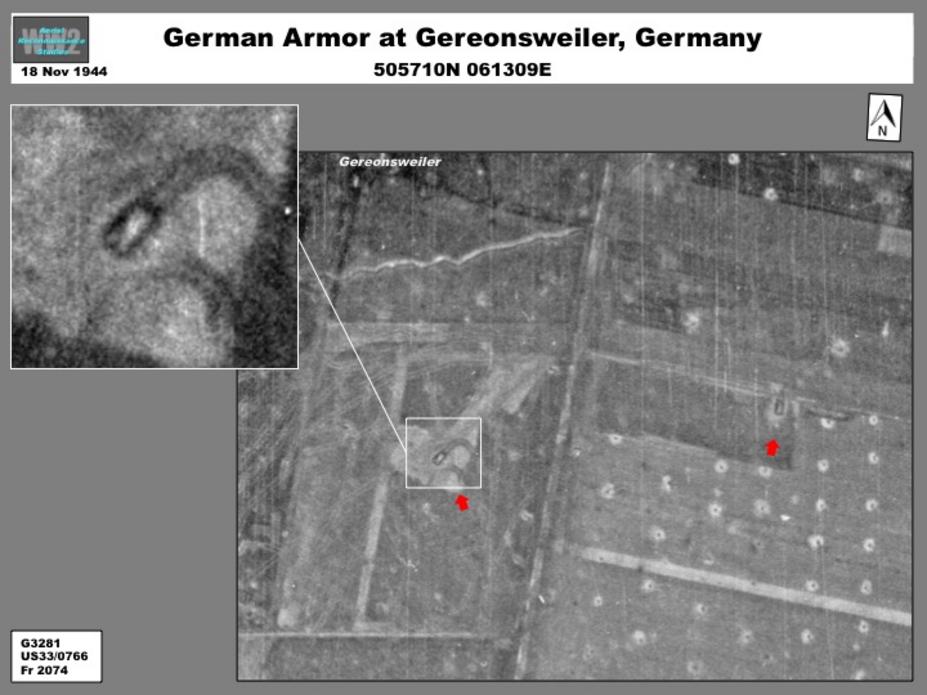 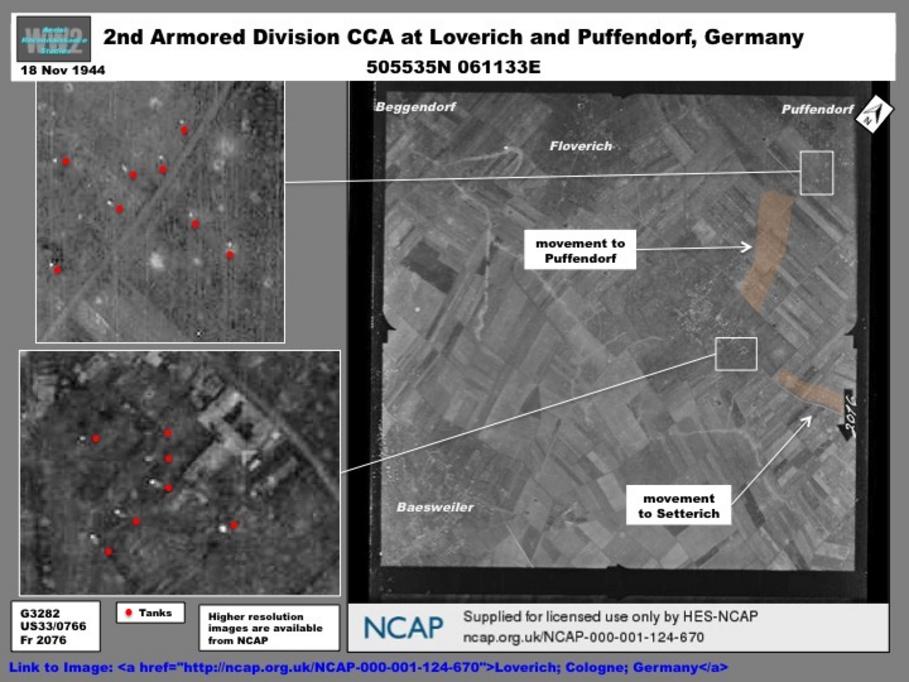 The offensive plan for 18 November called for another attempt to approach Ederen and Gereonsweiler from the south by sending the 116th Infantry Regiment with tank support against Setterich and the tank ditch. The attack took place on three axes: two supported by elements of the attached 747th Tank Battalion (attached to 29th Infantry Division) and one from Loverich by CCA TF A. The most successful of these attacks came from Loverich.  On 18 November probable elements of CCA were identified between Puffendorf and Loverich (Graphics 8 & 9).  A total of 40 tanks were observed: 15 parked along the Loverich-Puffendorf road; 15 parked in Loverich; and 10 more in possible defensive formation 300 meters north of Setterich (Graphic 8).  Fighting probably continued in Setterich, where an explosion --possibly from and air strike--was seen in the center of the village (Graphic 10). 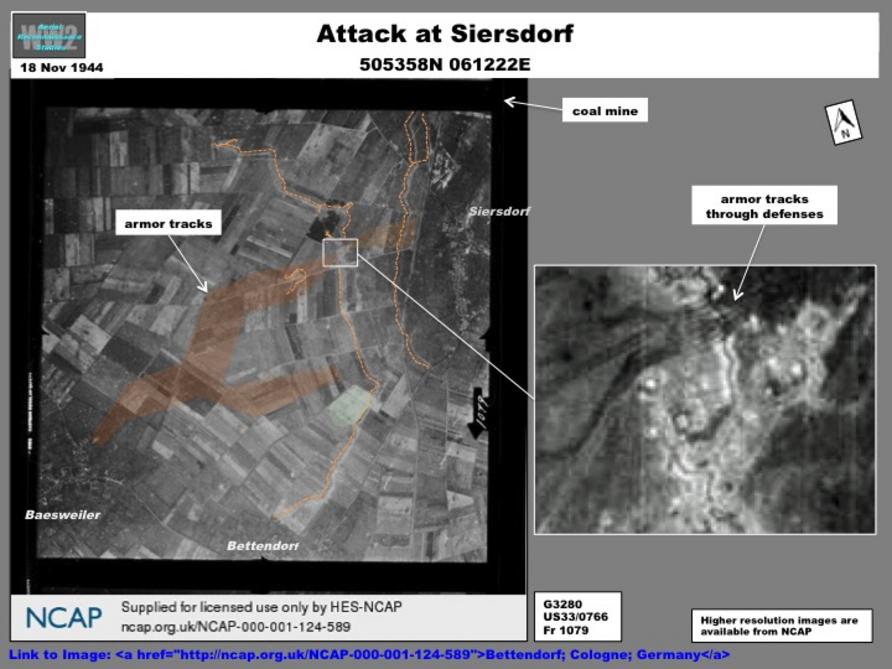 The 2nd Armored and 29th Infantry Divisions were were chosen to operate in northern and southern sectors, respectively (Maps).  One of the 2nd Armored Division’s combat commands--CCB--was assigned the northern sector.  CCB, composed of armor (two battalions-minus) and armored infantry of the 66th Armored Regiment, was made up of two task forces (TF): TF 1 and TF2, plus another, TF X, formed from the 67th Armored Regiment.  TF 1 was tasked with tasked with taking Gereonsweiler while the other two were tasked against Apweiler, 1.5 km to the west-southwest. In the south, the 29th Infantry Division’s 115th and 175th Infantry Regiments supported by the 2nd Armored Division’s other combat command CCA  (one battalion and the headquarters) were to head east in the direction of Setterich and Jülich.  Both American divisions successfully reached Immendorf, Puffendorf and Loverich, but met stiff resitance at Apweiler, Gereonsweiler, Setterich and  Siersdorf, on the 17th. 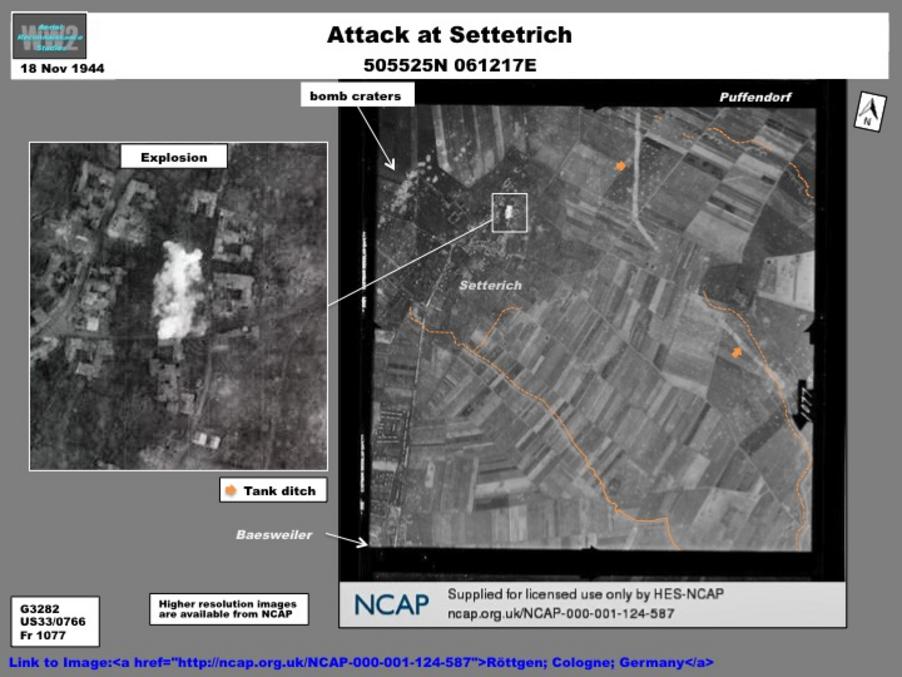 Later on 17 November and with TF 1 unable to mount an attack, elements of CCA (Task Force A) were instructed to bypass Gereonsweiler by moving northeast from Puffendorf to Ederen.  A key objective was to establish a crossing of the tank ditch. This attack quickly failed.  An analysis of tracks originating from Ederen along and through the ditch indicates several German tanks responded to the latter attack (Graphic 7).  One probable German tank remained in the field. 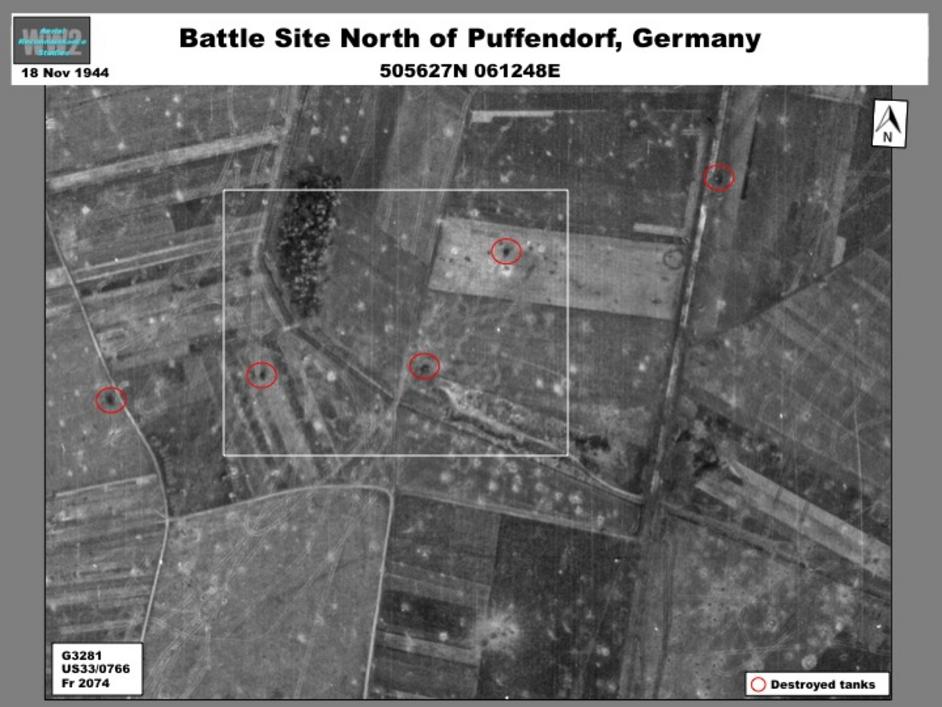 Most of the offensive action through 17 November took place in the north around the villages of Puffendorf, Gereonsweiler, Ederen and Apweiler (Map 1, Graphic 1). On the 18th, elements of CCB TF 1 (including some possibly from CCA) with about 30 tanks were parked in Puffendorf.  Some of the tanks appeared to be defensively deployed.  Task Force 1 had been forced back to the village after a German counterattack in the early morning of the previous day (Graphics 2 & 3).  Preparing to attack from a deployment site 600 meters north of Puffendorf, TF 1 was suffered a costly blow when caught by German tanks coming from Gereonsweiler (another counterattack was simultaneously launched against TF 2).  In an ensuing tank battle TF 1 lost about 35 medium tanks destroyed or damaged, plus a similar number of light tanks.  At least six destroyed tanks (five shown) remained at the battle site (Graphics 4 & 5). 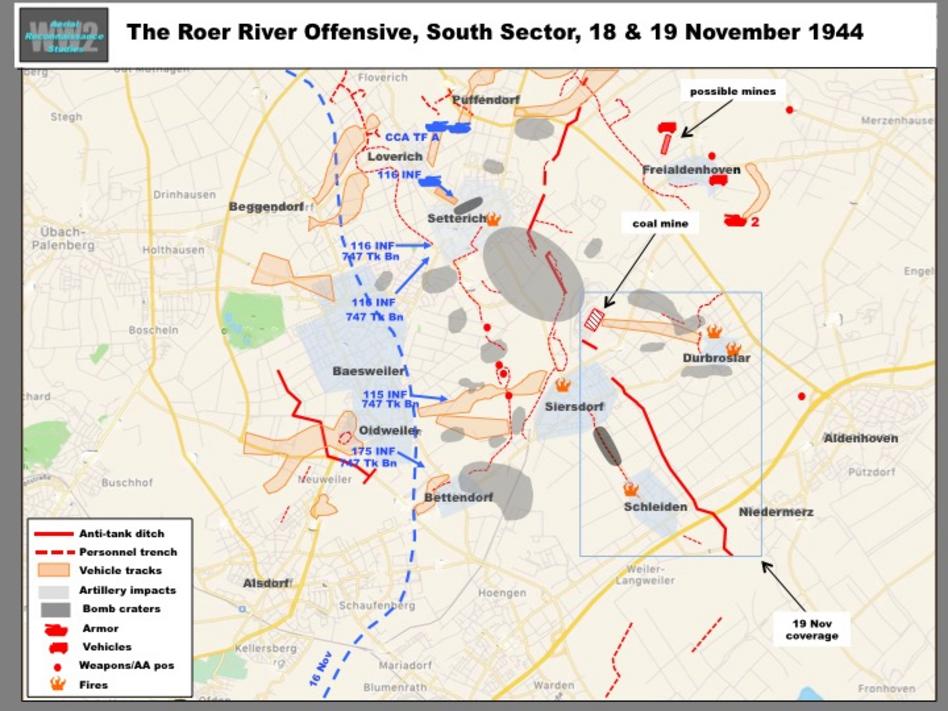 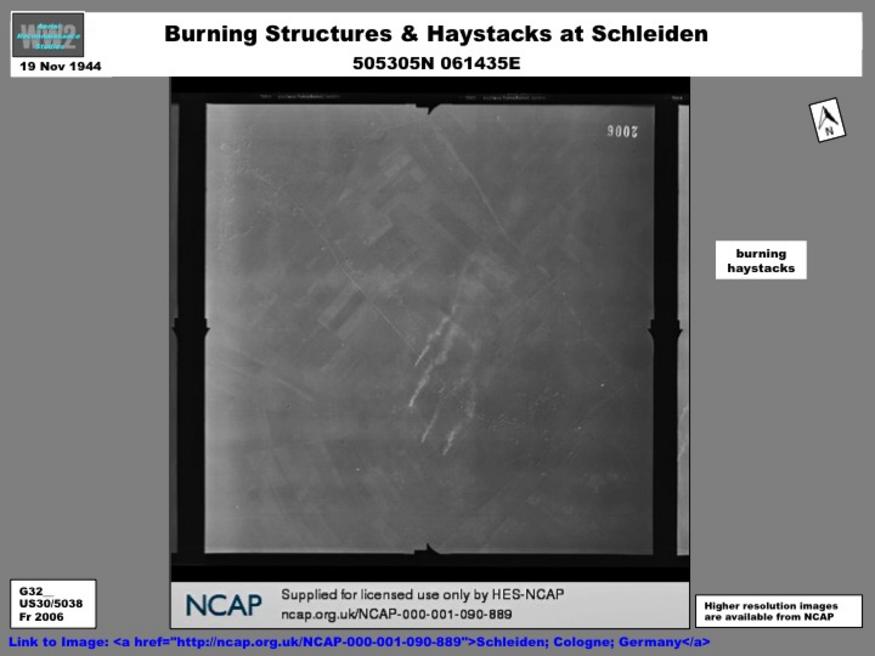 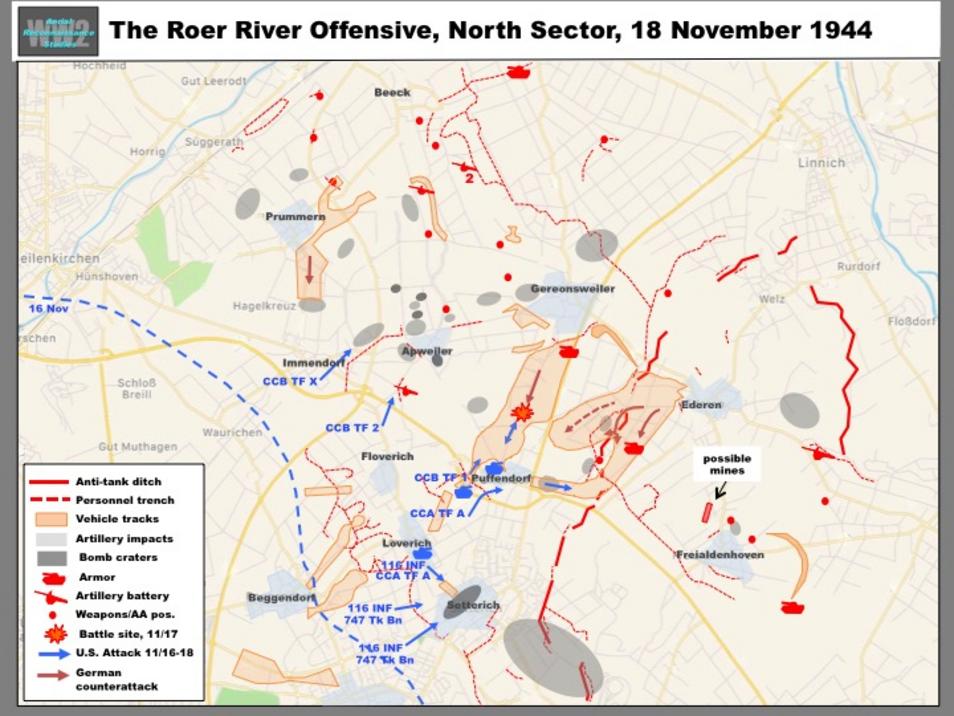 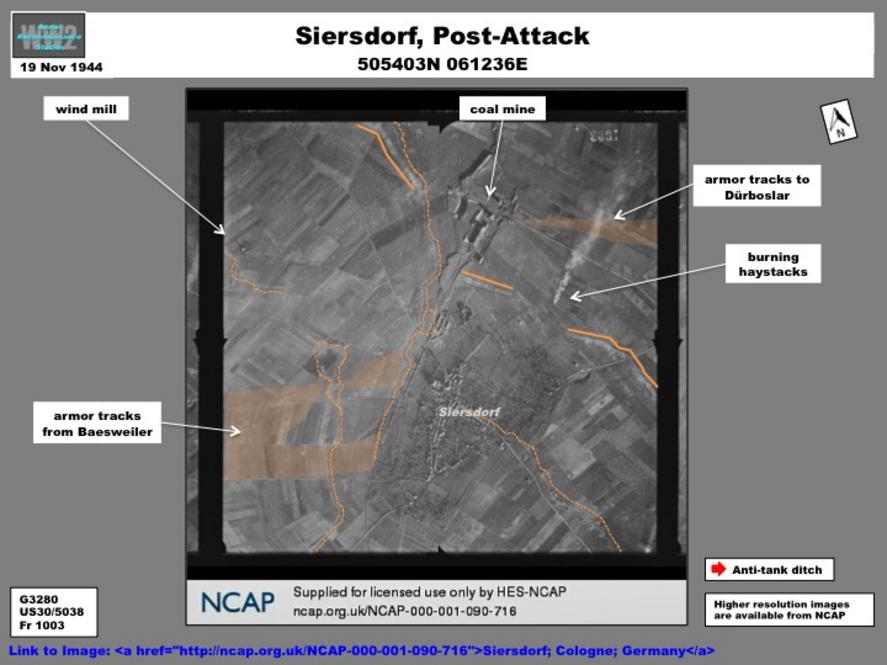 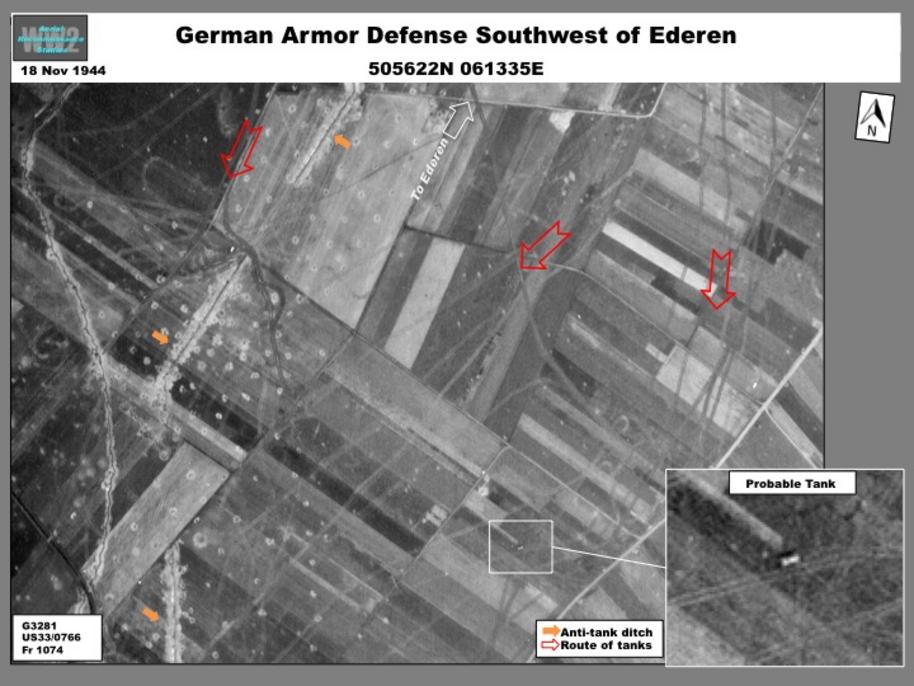 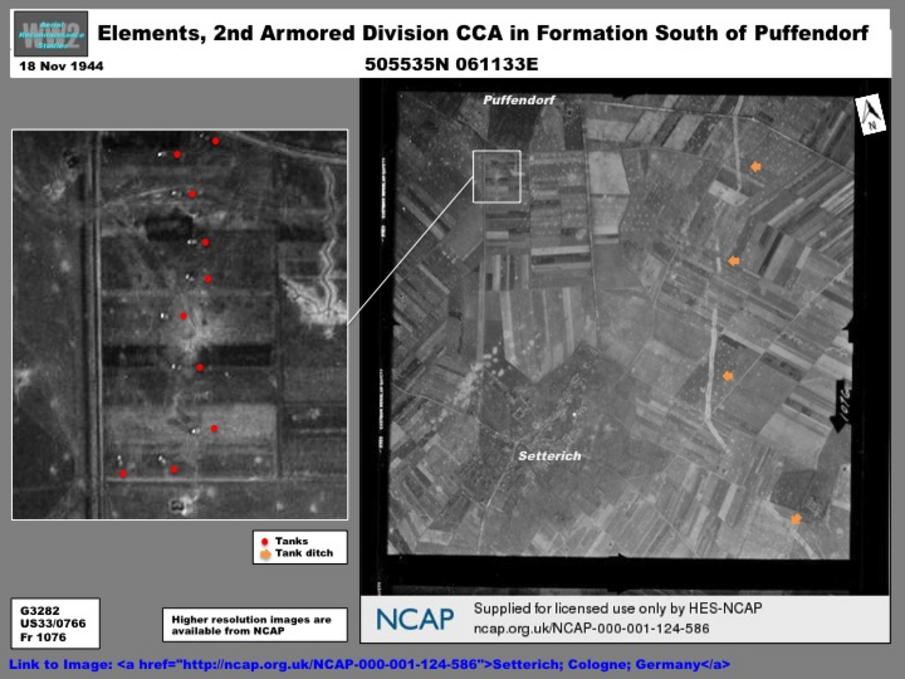