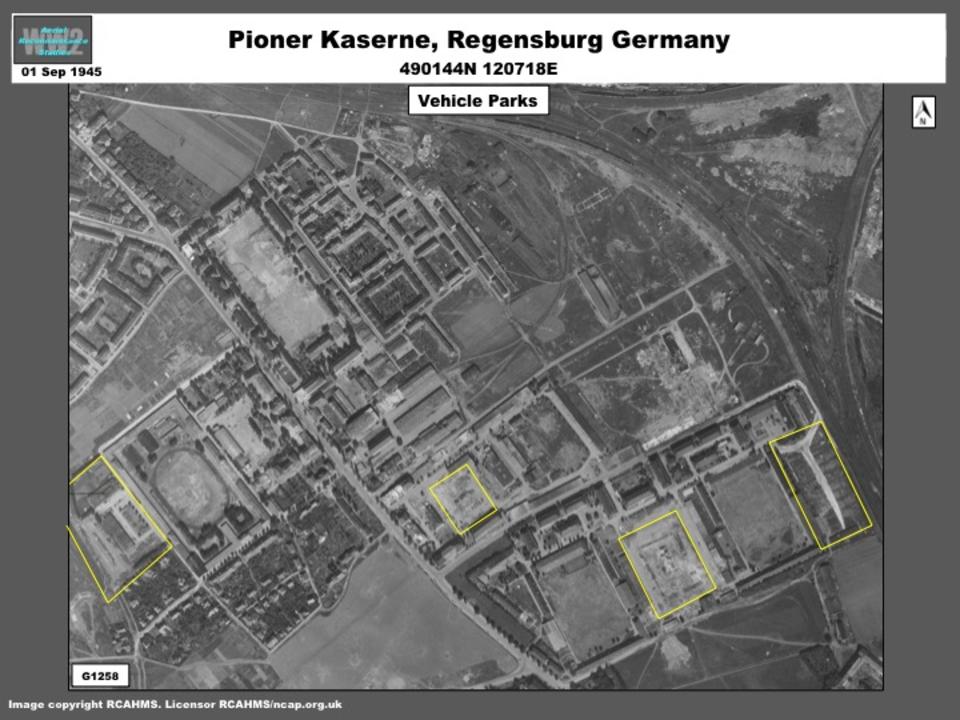 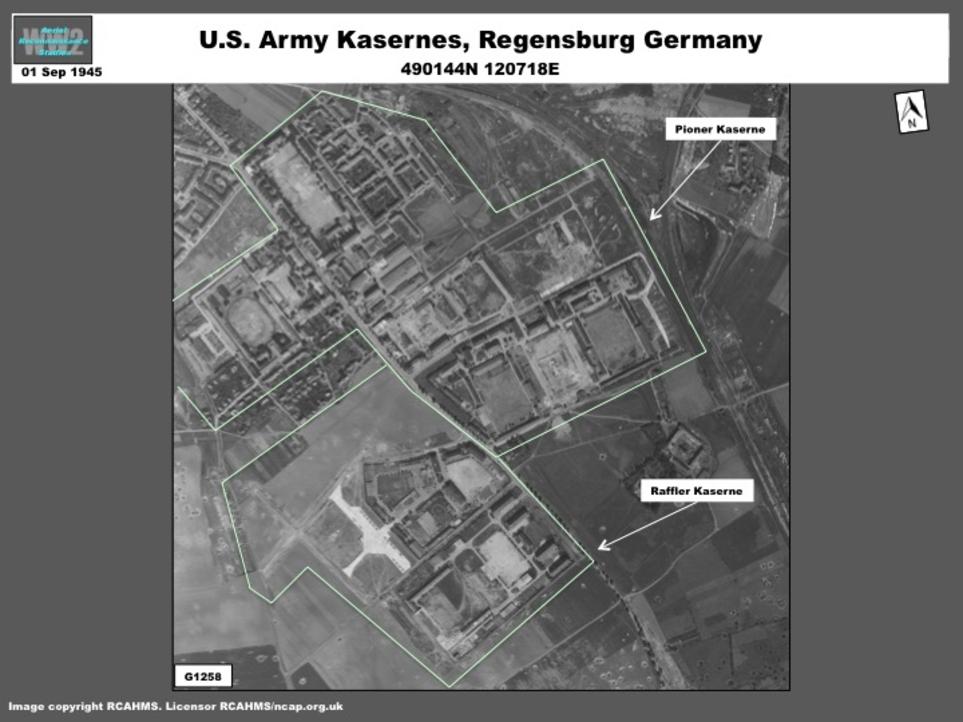 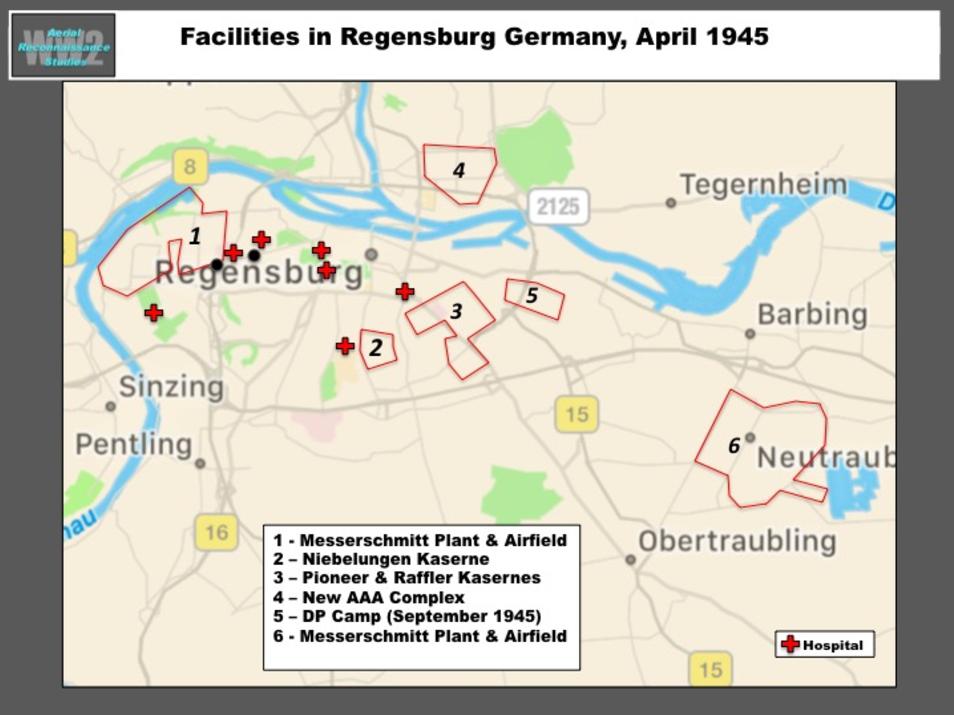 Elements of ther U.S. Army XII Corps (Third Army) were garrisoned in Regensburg on 1 September 1945.  All three of the city's former Wehrmacht barracks --including the Raffler, Pioner (Graphic 1) and Nibelungen Kasernes-- were occupied.  Other units were bivouacked southeast of the city at Neutraubling.  A  unit banner painted on the ground at the Raffler Kaserne revealed that  XII Corps artillery elements housed were housed there, including at least the Air Observation Sections (artillery spotter aircraft) supporting the Corps artillery battalions (Graphic 2).  Two intersecting runways and a parking apron had been constructed by the U.S Army.  Seventeen L-4 liasion aircraft plus a possible ex-Wehrmacht Fiesler Storch were parked on the hardstand.  A large number of vehicles were in several parks  in the Pioner Kaserne, but numerous vehices were in several vehicle parks (Graphic 3).​​

Facilities in Regensburg April - September 1945
Allied reconnaissance coverage of Regensburg in the early months of 1945 showed evidence of heavy bombing of the city's railyards, kasernes, and the Messerschmitt Plants and airfields at Prufening and Neutraubling.  Both Messerschmitt facilities had been destroyed.  A new extended runway for Neutraubling plant was in the early stage of  construction. The plants were defended by anti-aircraft (AAA) batteries, but a new complex --only partially occupied-- had been constructed north of the city by April 1945.  With seven hospitals Regensburg was a major Wehrmacht medical complex.  Most of the hospitals were temporary facilities.  A hospital train was entering the city from the south in early 1945.  Remarkedly none of the hospitals --especially the large facility adjacent to Prufening aircraft plant-- had sustained damage. 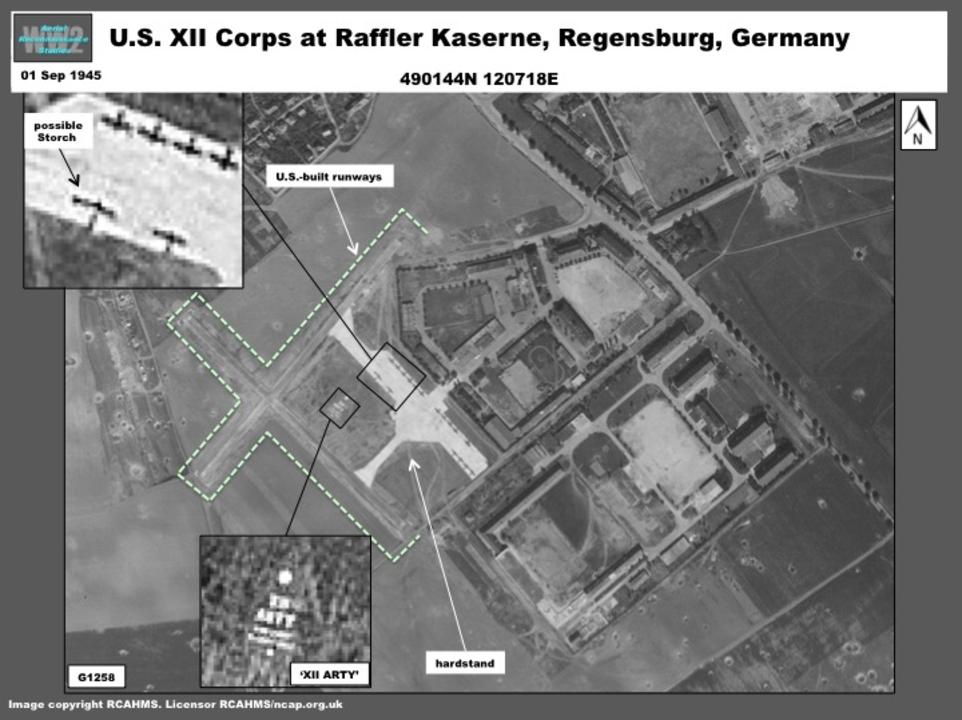