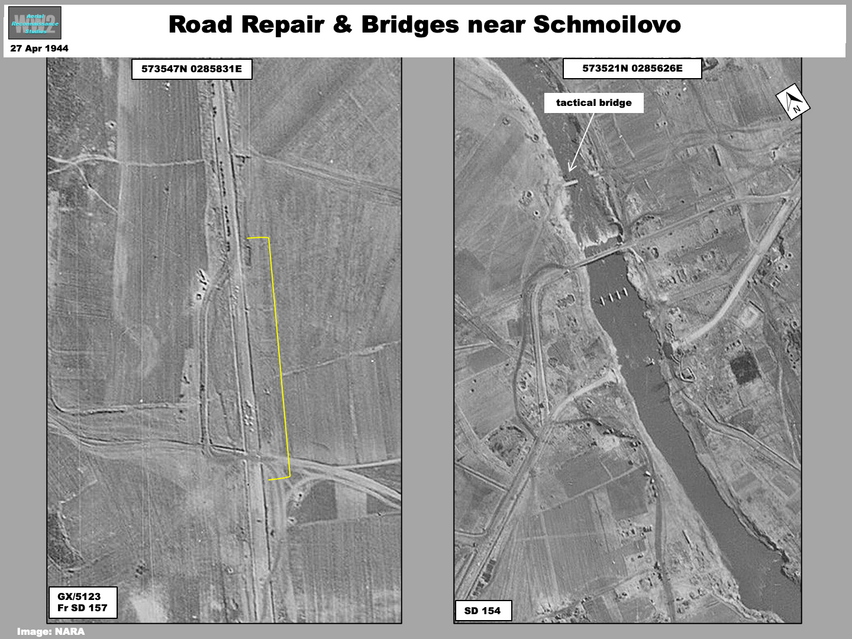 Along the Front Lines 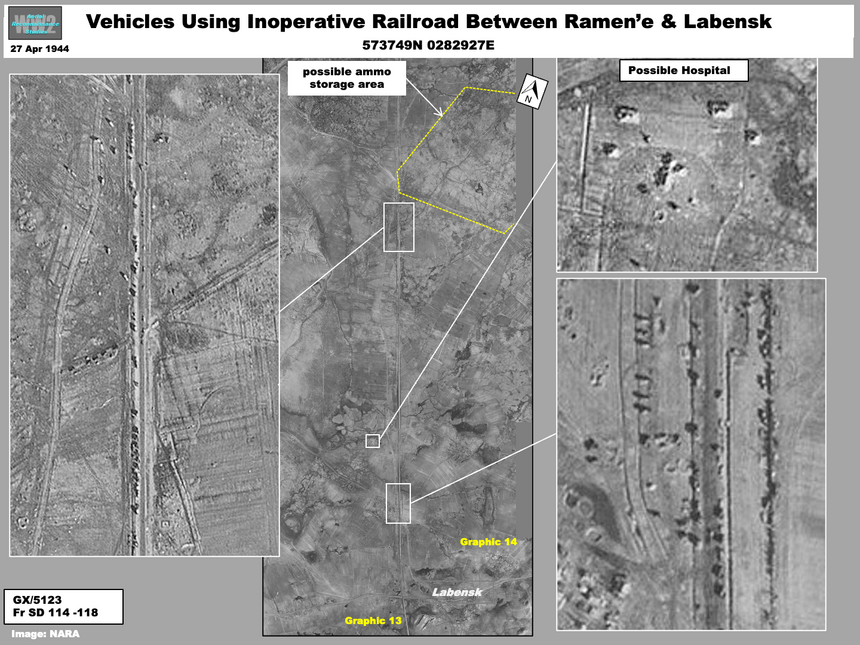 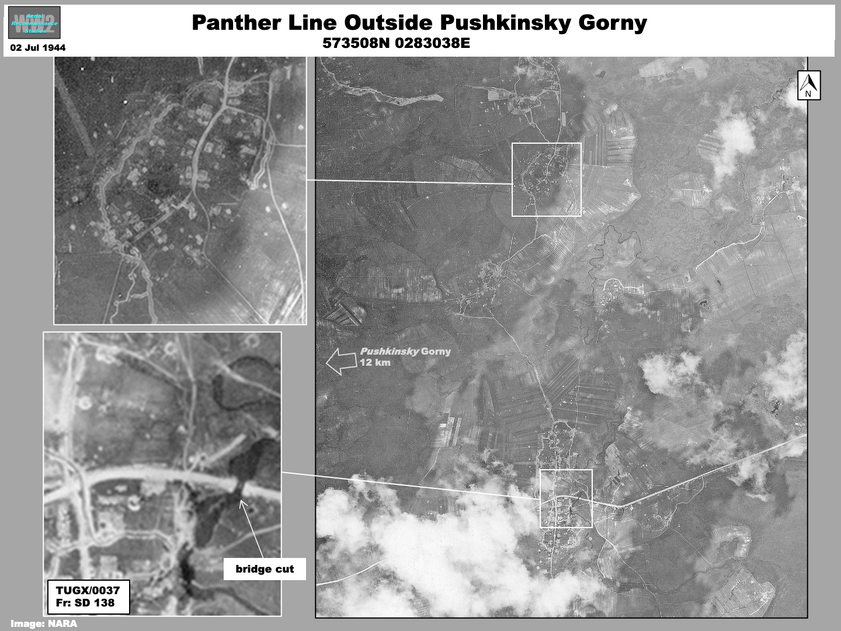 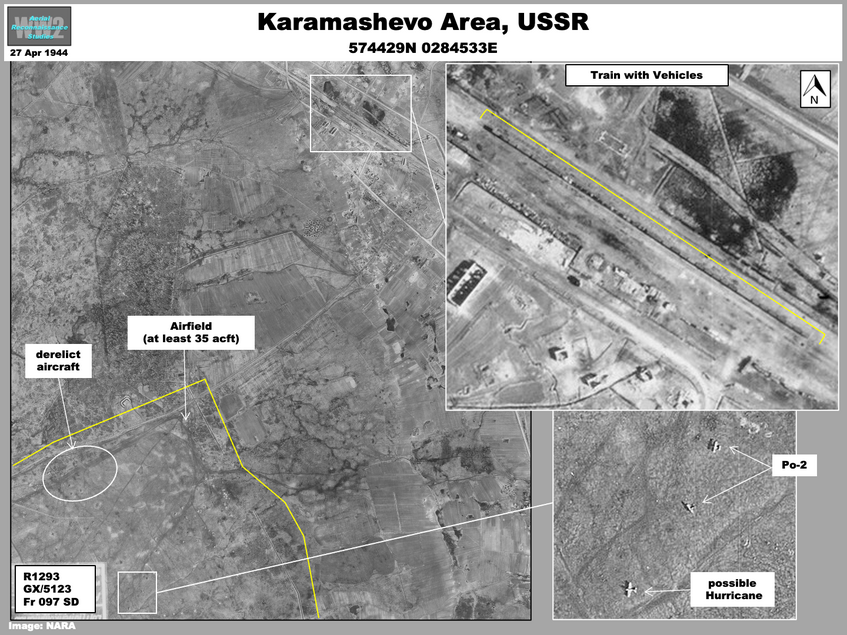 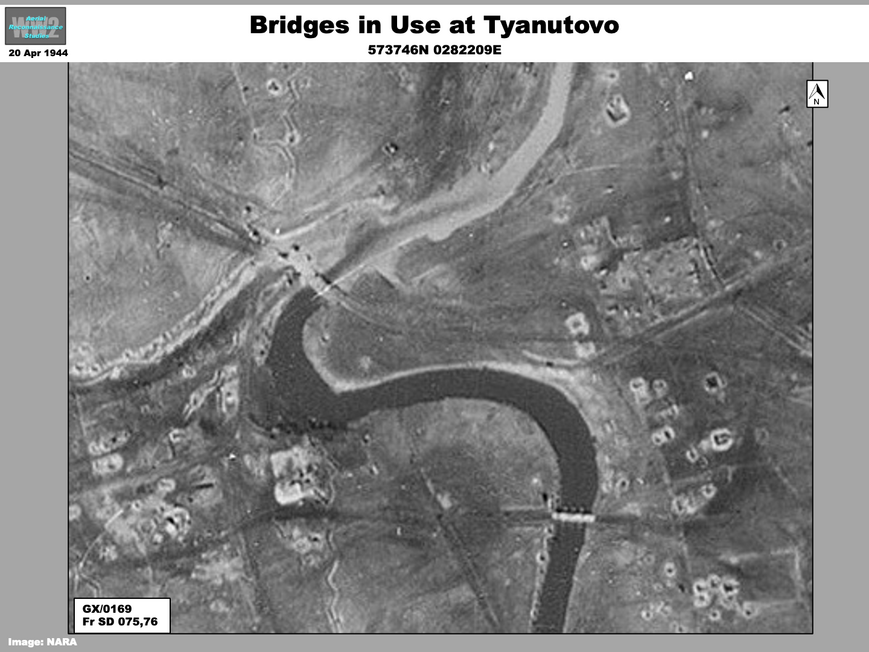 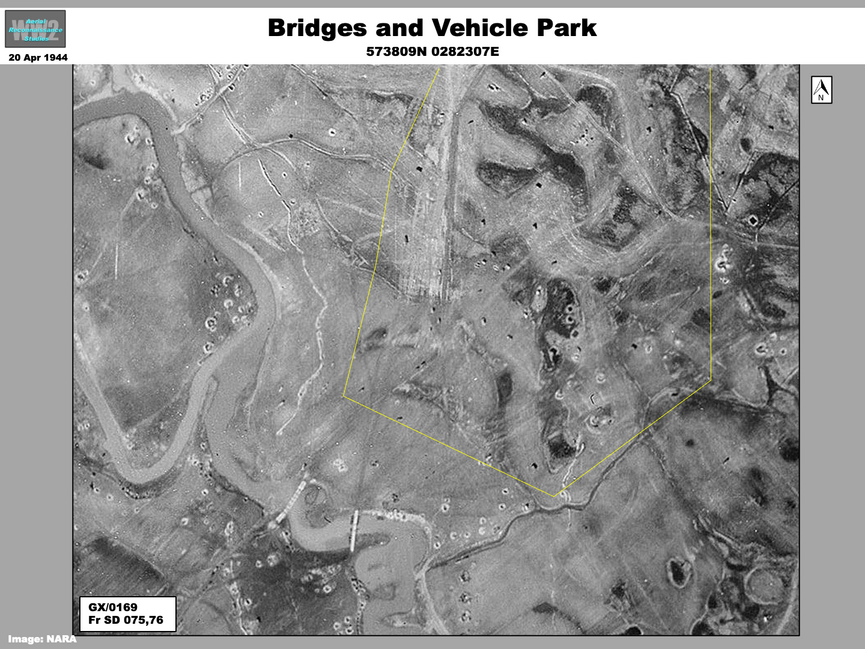 The sortie on 27 April was clearly flown to monitor Soviet activity along roads and rail lines in rear areas. Vehicular traffic and evidence of road repair could be seen along most roadways (Map 1).  Examples of repair include a 15 km-long segment of the road between Ramen'e and Lipety, where surfacing material was being applied to the roadbed (Graphics 16 & 17).  Road repair and replacement of destroyed bridges was observed at Podvorov'e and Schmoilovo, to the northwest and southeast of Lipety, respectively (Graphics 18 & 19).  ​Elsewhere, two bridges on the major north-south road between Bezhanitsy and Dedovichi had not been replaced or bypassed, although the road otherwise appeared serviceable.  For some reason, road work and other activity along this road was confined to the southern segment (Map 3, Graphic 20).   ​​ 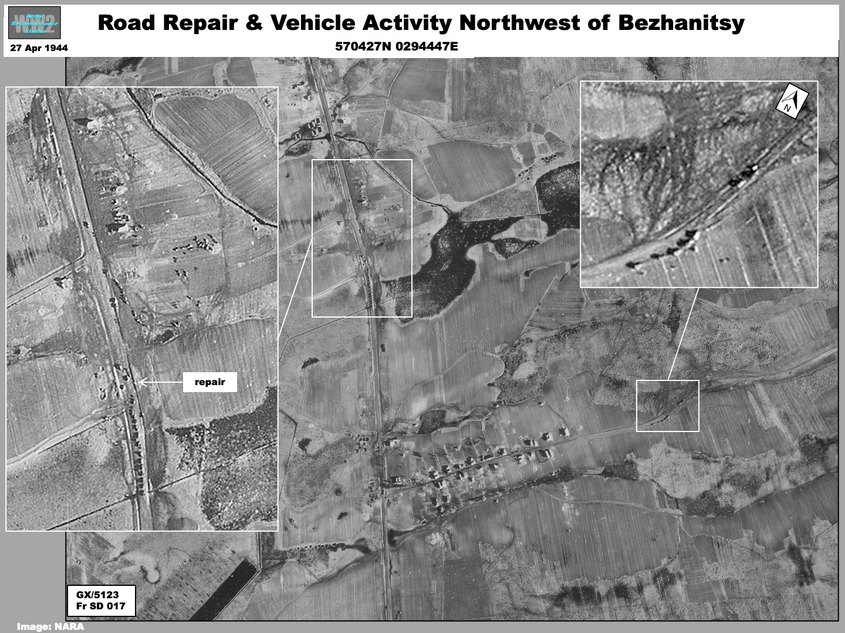 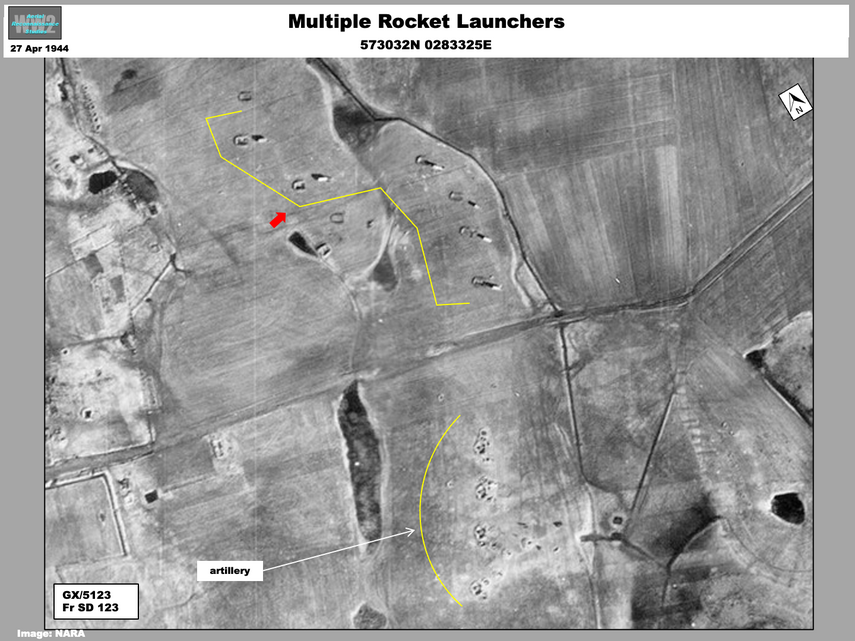 Along the Panther Line Southeast of Ostrov 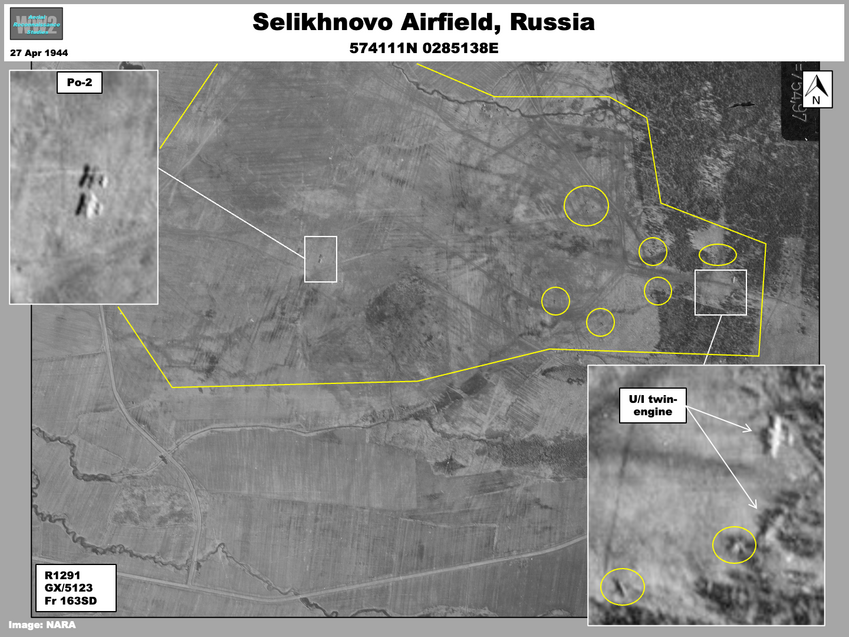 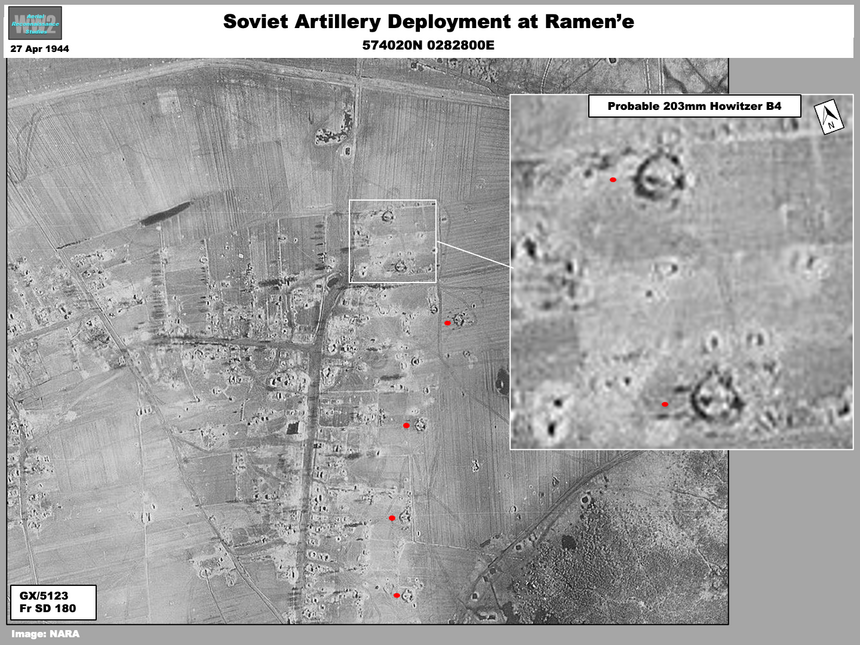 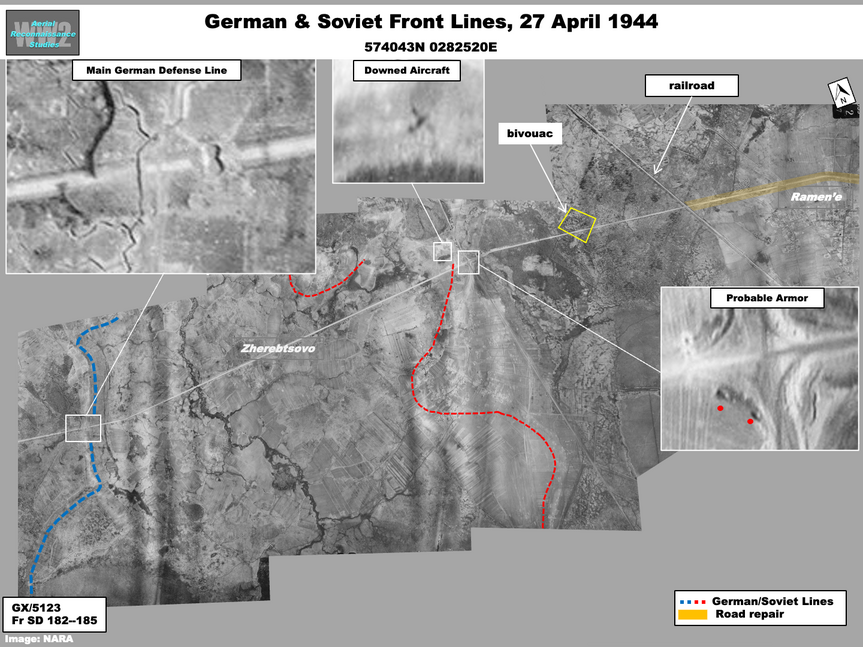 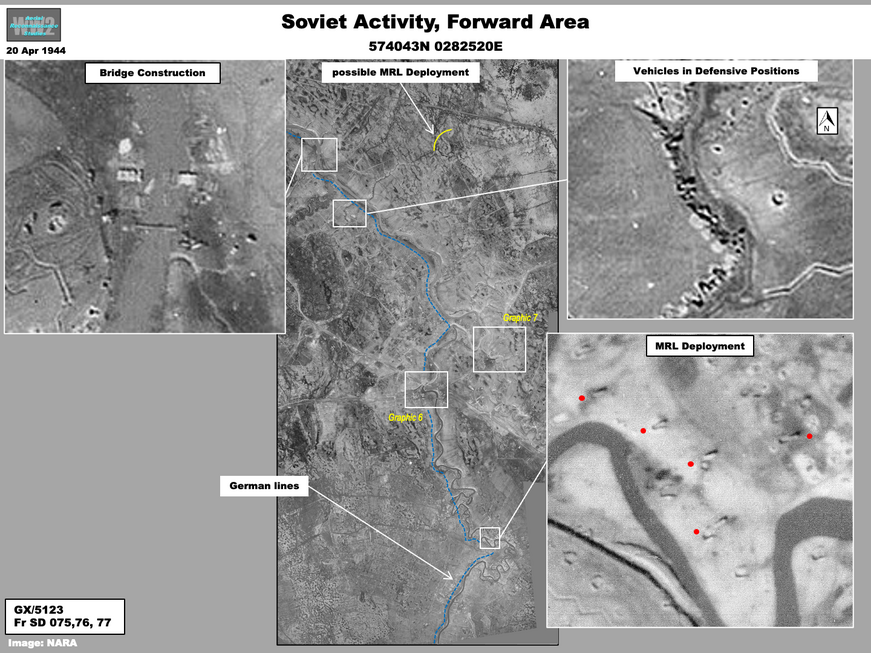 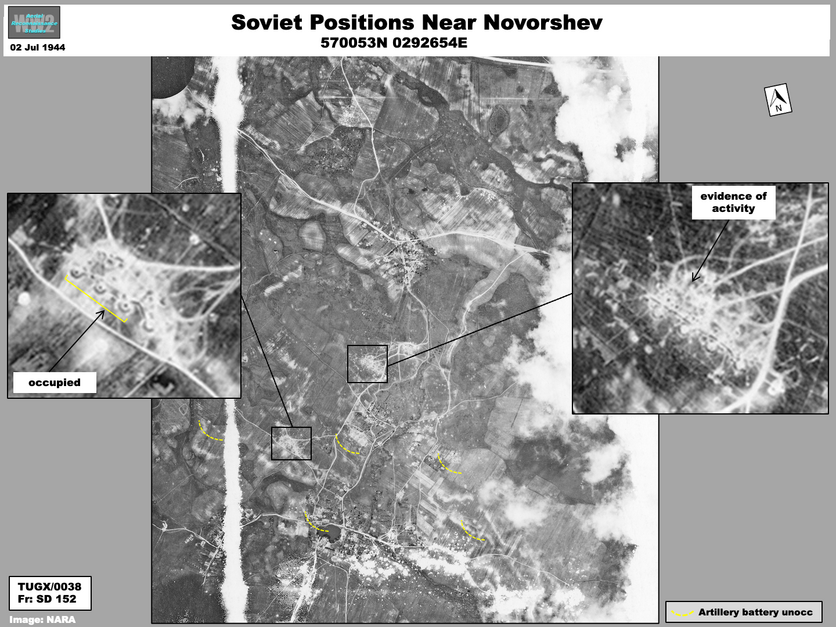 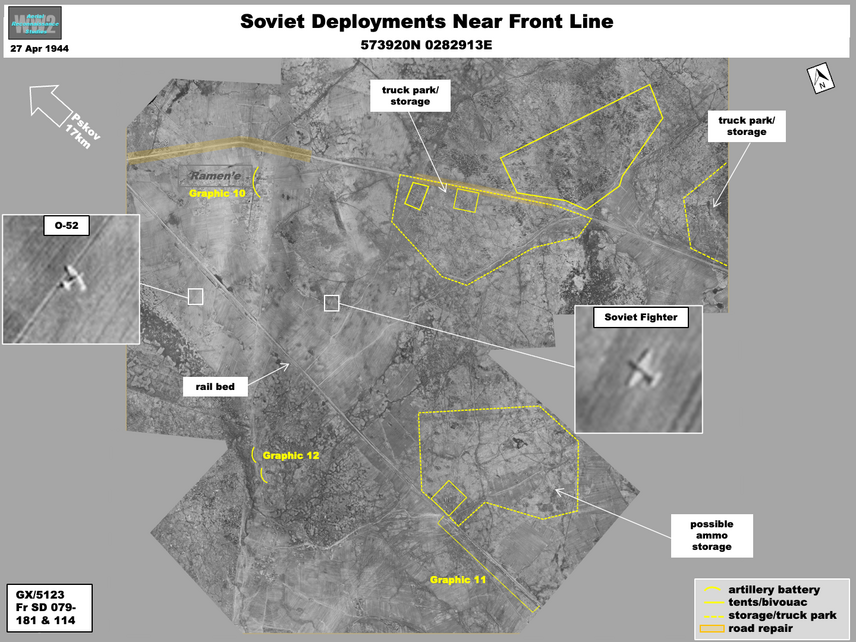 The 67th Army launched an attack on 1 April, breaching the German defenses along the highway and rail line between the villages of Stremutka and Vernyavino (Map 2, Graphic 1).  Coverage of the area on 4 April revealed evidence of fighting, which had subsided by the 20th. The northernmost (identifiable) soviet advance was indicated by artillery batteries (plus other unoccupied positions) deployed east of the railroad line between Stremutka and Zareznitsa (Graphic 2); from there, the Soviet line extended south, 5 km across the rail to Vadrino and then back across the rail bed and highway to Vernyavino.  By the 20th the Germans had most likely withdrawn from initial fallback positions along the railroad to new positions along a stream to the west; however, a German artillery position that remained on the west bank of a stream at Zareznitsa suggested they could have held on there (Graphic 3).   Whether or not the Germans still held these lines on 20 April, there was evidence that after 4 April, armor was employed to counter soviet attacks between Sidorovo and Zareznitsa, at Vadrino and along the rail bed southwest of Stremutka (Graphic 4).  A probable knocked-out tank was sitting amidst a field of fresh track activity southwest of Stremutka (Graphic 2)  There was also evidence of a more  limited use of Soviet armor south of Stremutka. 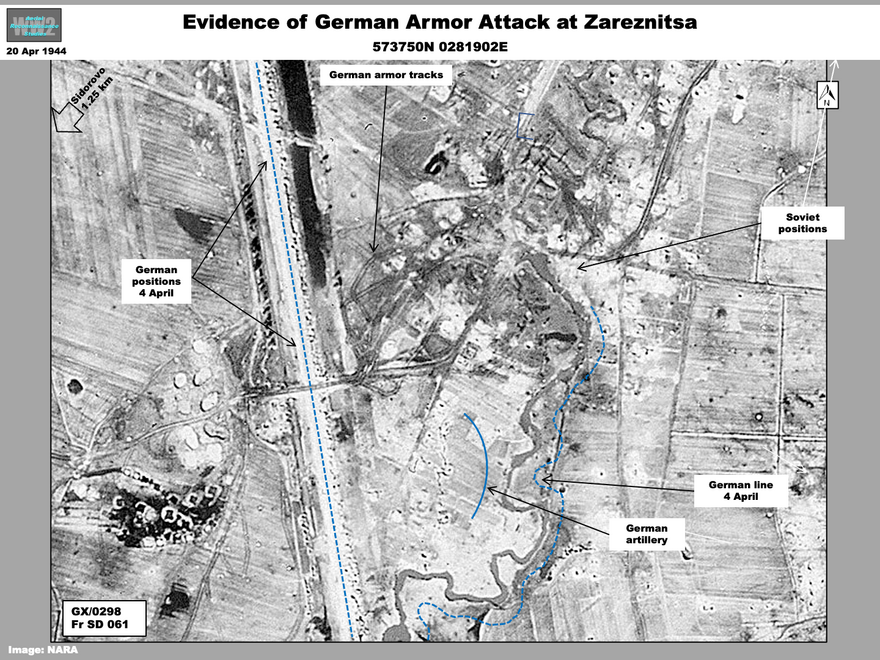 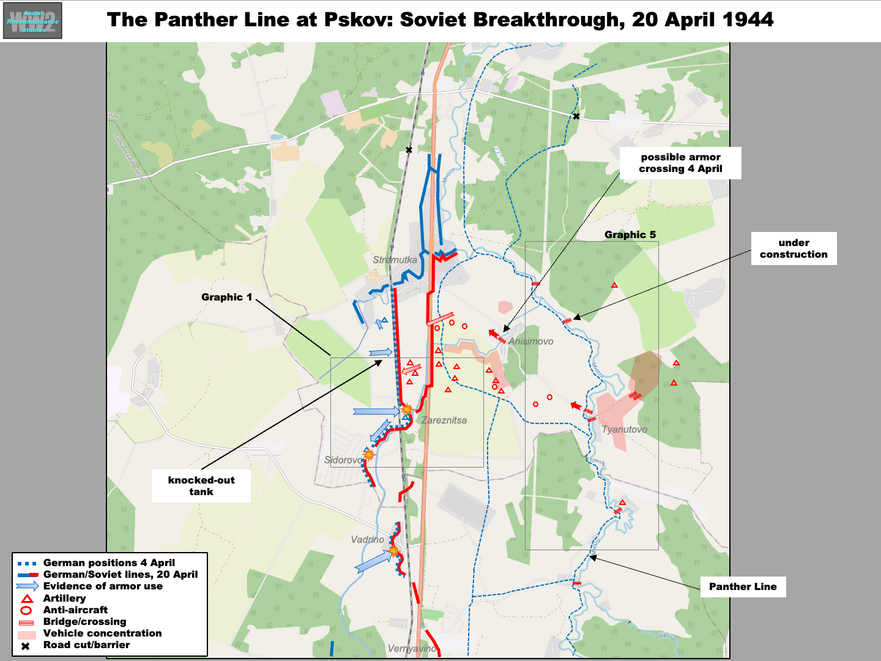 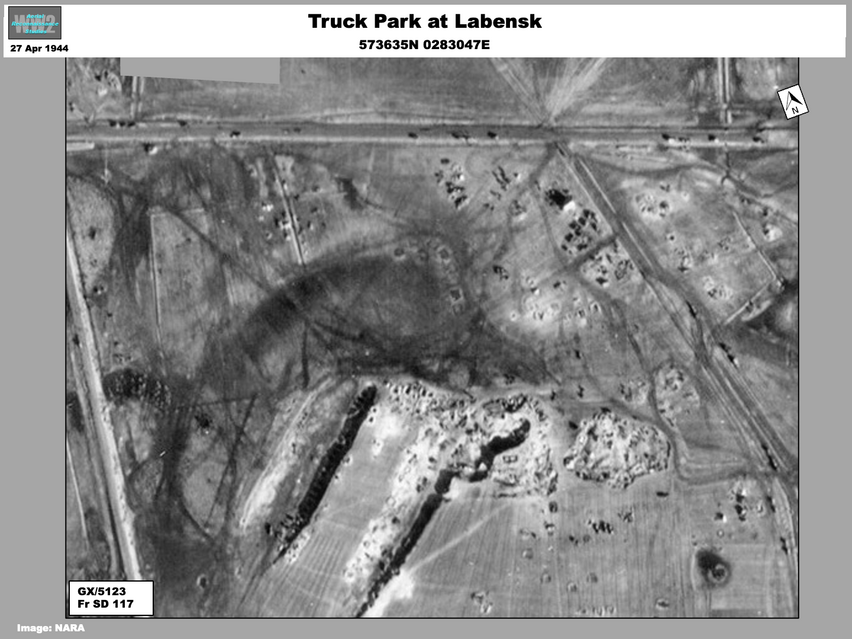 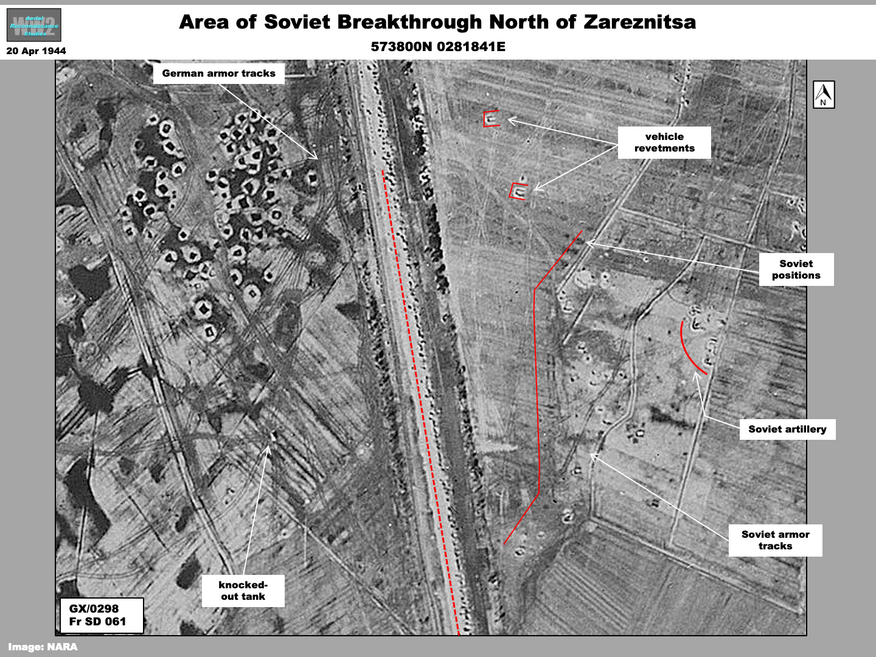 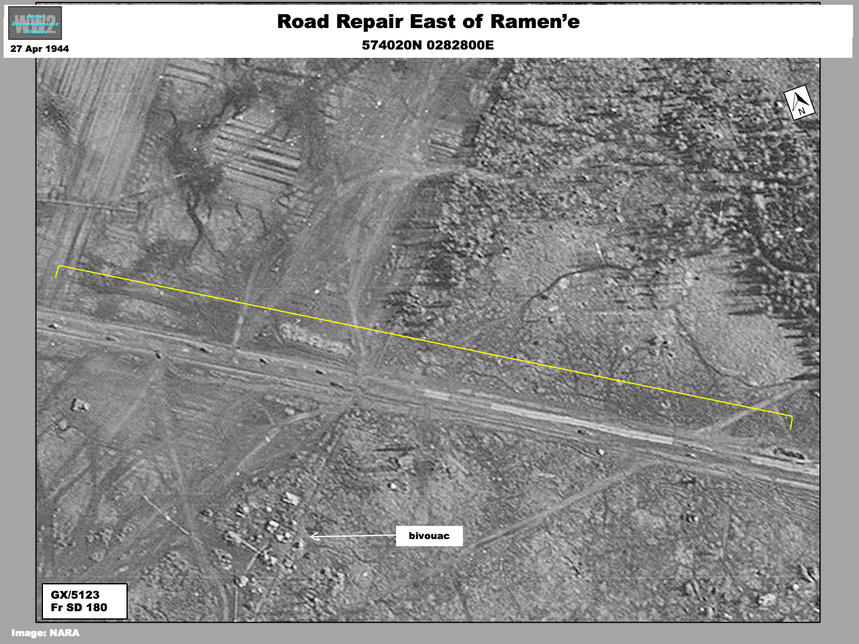 Evidence of Soviet air activity was seen at Lipety, where the shadow of a Po-2 aircraft could be seen over the ground. The aircraft, probably on a courier mission, was flying southwest along the road (see Graphic 17). Small numbers of Po-2's were observed at all three Soviet airfields imaged on 27 April (the German base at Pskov was unoccupied after facilities had been demolished). Two of these, Karamayhevo and Selikhnovo --both within 30 km of the front lines-- were newly-built (Maps 1 & 3, Graphics 22 & 23).  Karameshevo was only partially covered, but the presence of at least 35 fighter aircraft and four Po-2's indicated it was probably the 3rd Baltic Front's major air base at the time.  Only about 12 aircraft --two unidentified twin engine, eight fighters and two Po-2's were at nearby Selkhnovo.  Only four Po-2's were at the much larger base at Dno where runways and facilities had been demolished by the retreating Germans.  Additional research revealed the Soviets had at least seven other airfields in the vicinity of the Panther Line prior to the June offensive (Map 3).  A probable key base for the July offensives was the airfield at Ashevo, where a major buildup took place between 13 May and 18 June, when 60 aircraft --including Pe-2, Il-2, YAK and Li-2 transports-- were present.

By 20 April, the Red Army had already begun to supply front-line troops immediately behind the breakthrough area.  At least eight bridges --some still under construction-- had been erected over rivers and streams and hundreds of vehicles were concentrated in the area (Map 2, Graphic 5 - 7).  Some of this activity took place much earlier, as possible armored vehicles were already using a ninth bridge at Anisimovo, 3.5 km from the front line, on 4 April. 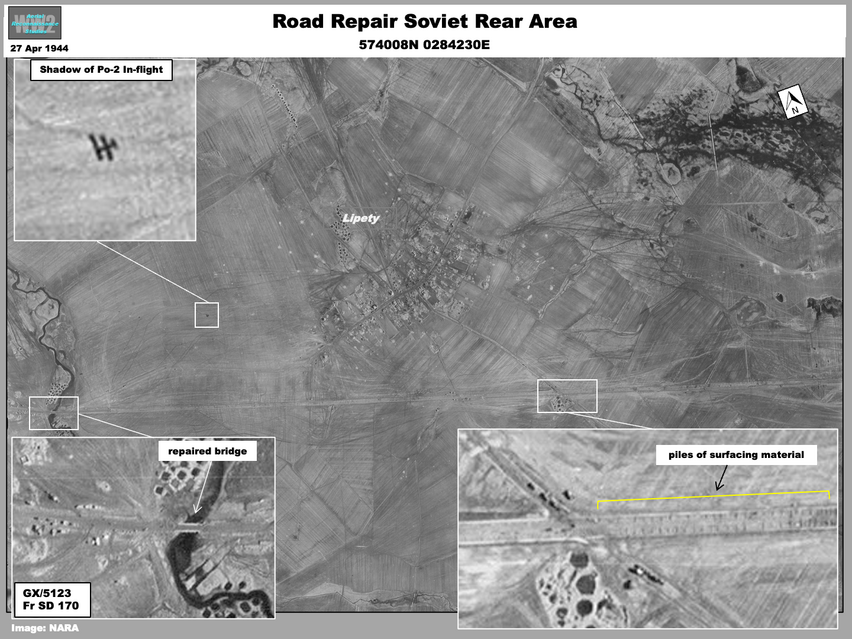 The Red Army was delivering equipment to a railhead at Karmyshevo, only 25 km from the front lines.  Rail facilities at Porkhov  Dno and Kunavino were very active, (Maps 1 & 3, Graphic 22).   A train was heading south from Kunavino.

The Red Army at the Panther Line: Pskov to Ostrov, April 1944 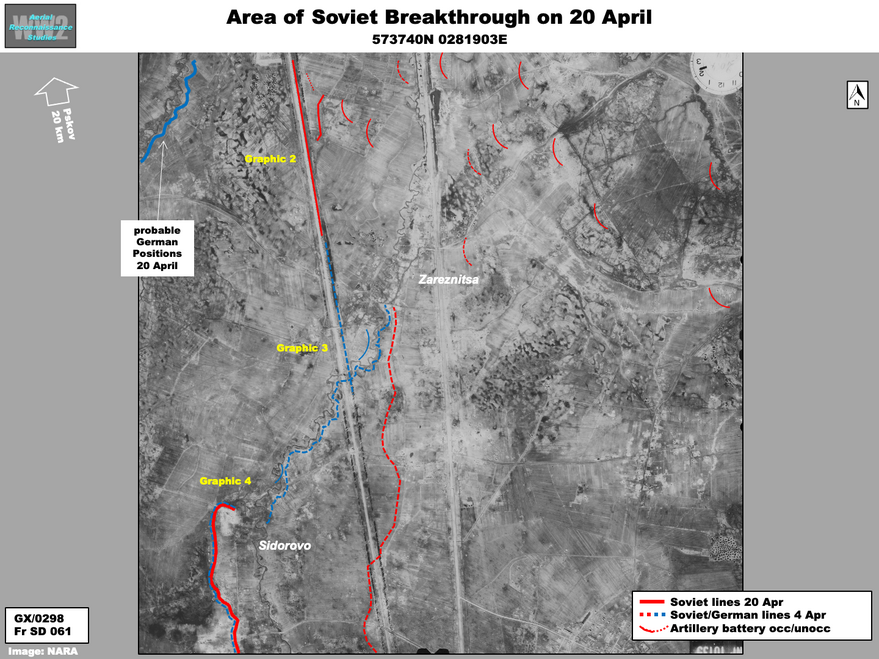 The coverage on 2 July highlighted the extensive defensive network that comprised the Panther Line between the major strongpoint at Pushkinsky Gorny and settlement at Grivino.  Twelve kilometers east of Pushkinsky Gorny, a destroyed bridge blocked access to the defense line. (Graphic 24).  Soviet positions on the south bank of the Reka Sorot' began near the town of Norvorshev and continued to the southeast around eastern stretches of the Panther line (Graphics 25 & 26).  The presence of many artillery positions indicated recent deployments, but most were unoccupied. Six bridges (two shown) had been erected by the Soviets in this area.  A recently-installed telephone line --a feature not previously seen in Soviet-occupied areas-- was visible along the main road between Bezhanitsy and Novorzhev in the vicinity of Grivino. 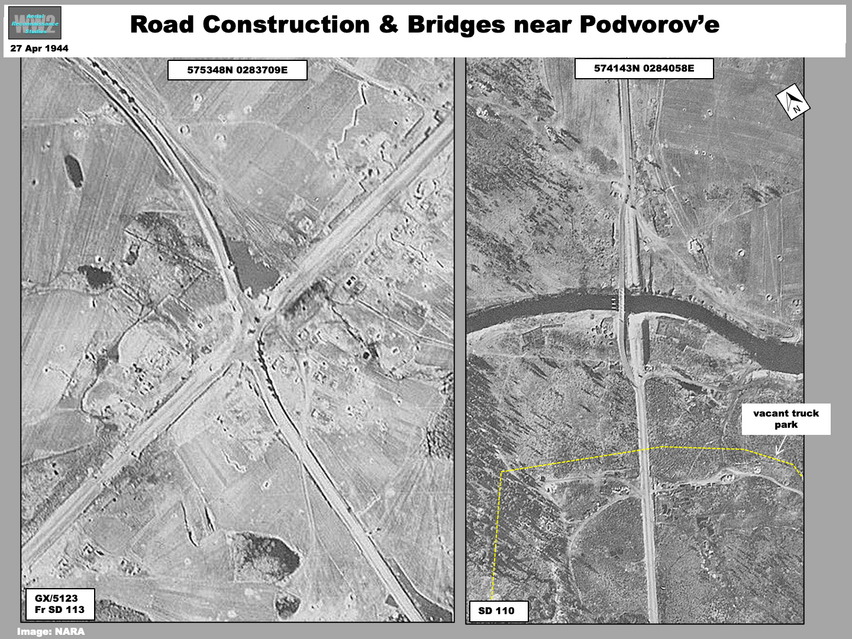 Numerous bivouacs and tent camps could be seen in Soviet-occupied areas. Most of these were small, supporting storage areas or serving as way-stations along roadways (Graphic 21); none --with the exception of the bivouac at Ramen'e-- was large enough to billet a large number of troops. 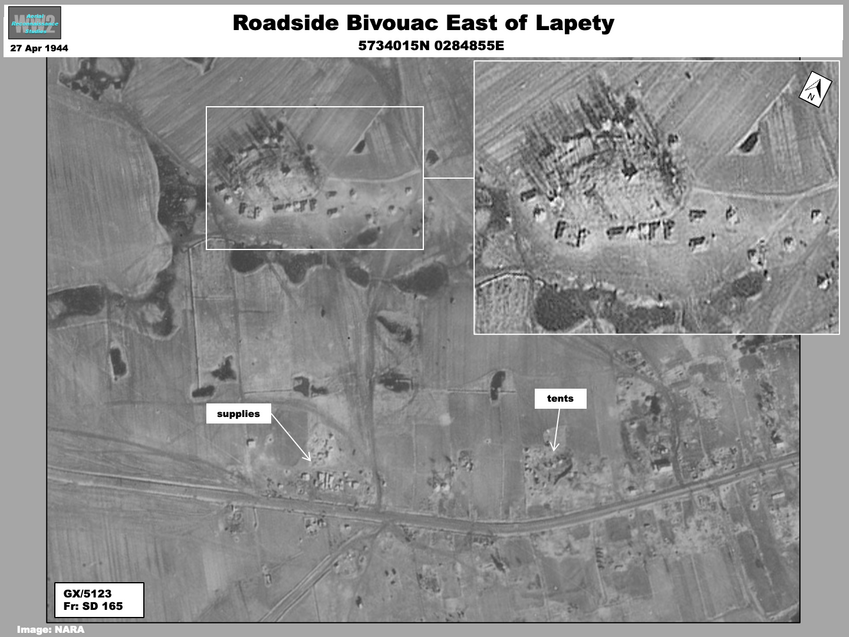 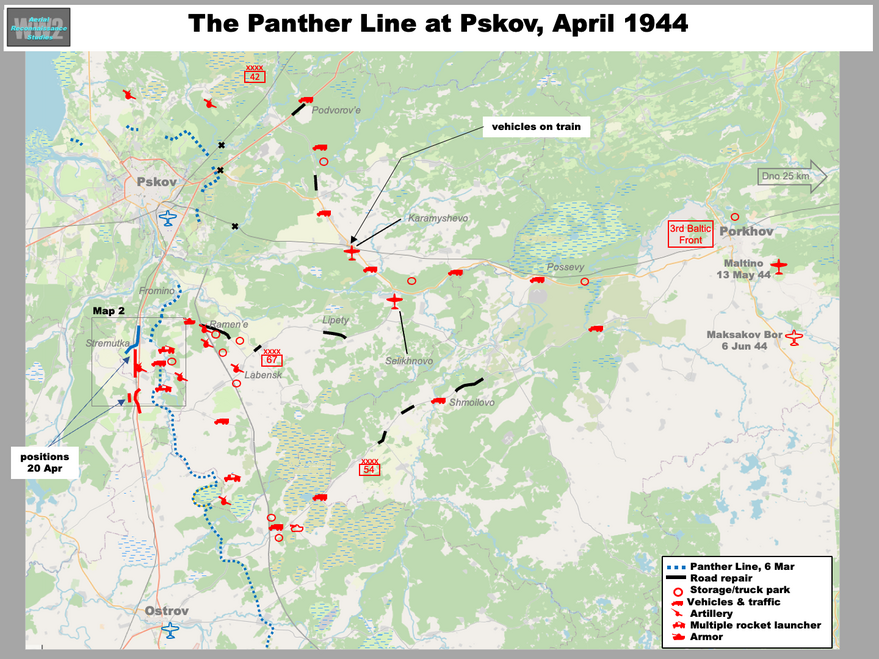 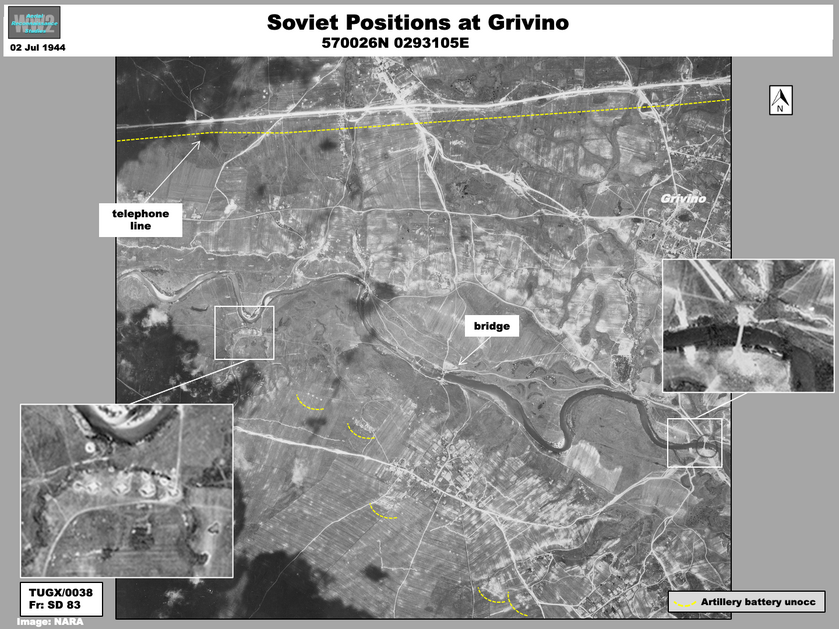 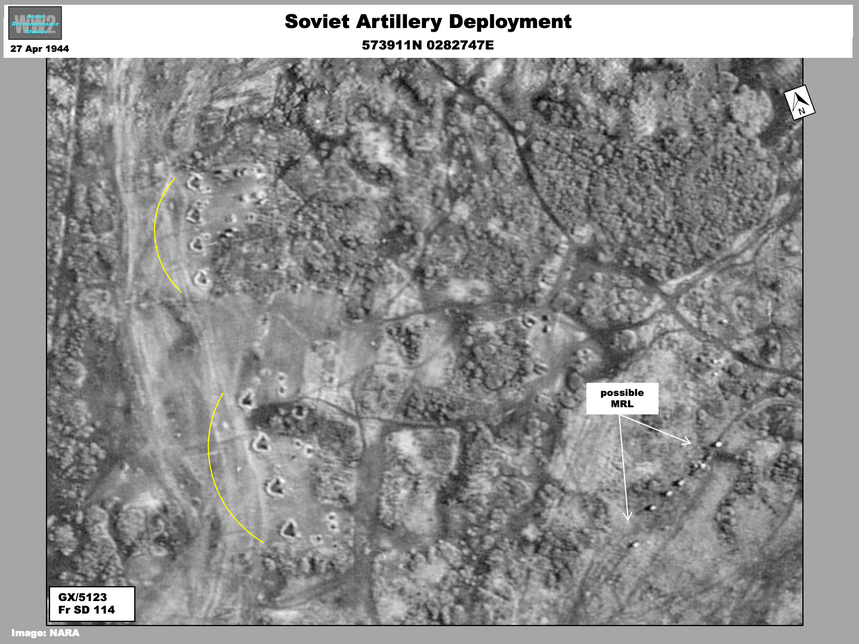 Sorties from 20 and 27 April did cover the Panther Line from Pskov to the Velikaya River 32 km southeast of Ostrov, but there was little evidence of Wehrmacht activity.  A freshly excavated trench system around Fromino on the 20th had been made in response to Soviet advances.  Highways and rail lines in at least four areas had been cut and other barriers established. Good coverage of the front at Zherebtsovo, 7 km northeast of the Soviet breakthrough site, showed opposing lines on 27 April (Map 1, Graphic 8).​   On the German side, the highway had been cut and the trench system extended across the road.  East of Zherebtsovo, the Soviet line was composed of foxholes and trenching; two armored vehicles were deployed at a road junction on the line. A downed fighter aircraft could be seen near the Soviet front line. 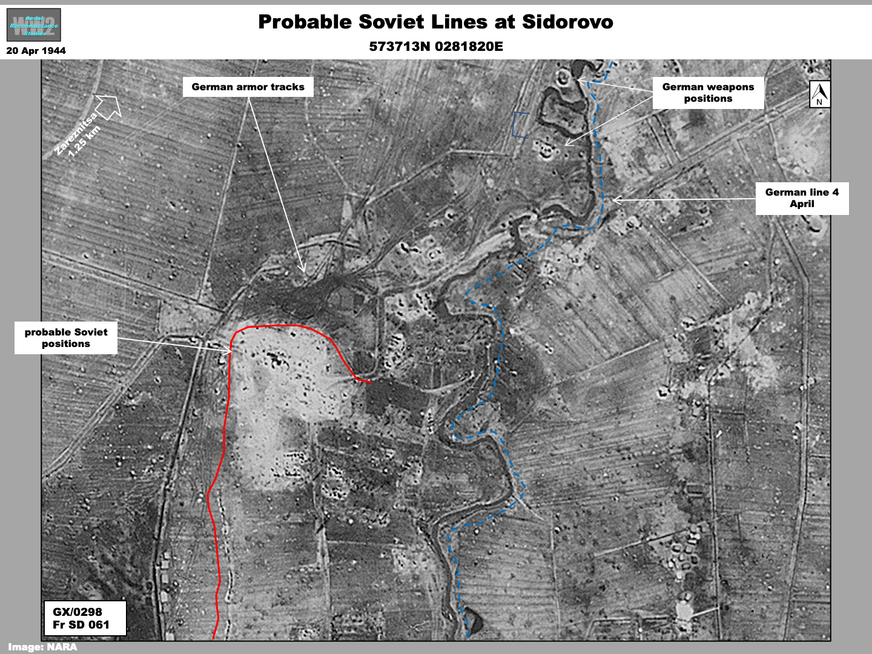 The Luftwaffe flew several reconnaissance sorties over German and Soviet positions in March and April.  Major stretches of the Panther Line could be mapped on coverages from 6 and 23 March, but there was little evidence of Wehrmacht activity.  This study focuses mainly on coverage from 20 and 27 April that offered an unusually good perspective into Red Army activity along a major frontal area.   (Map 1). 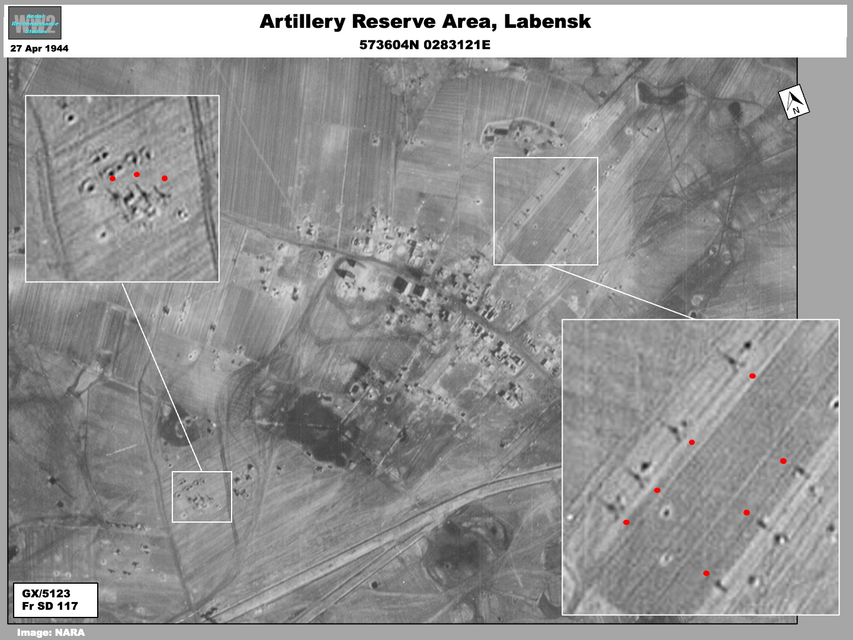 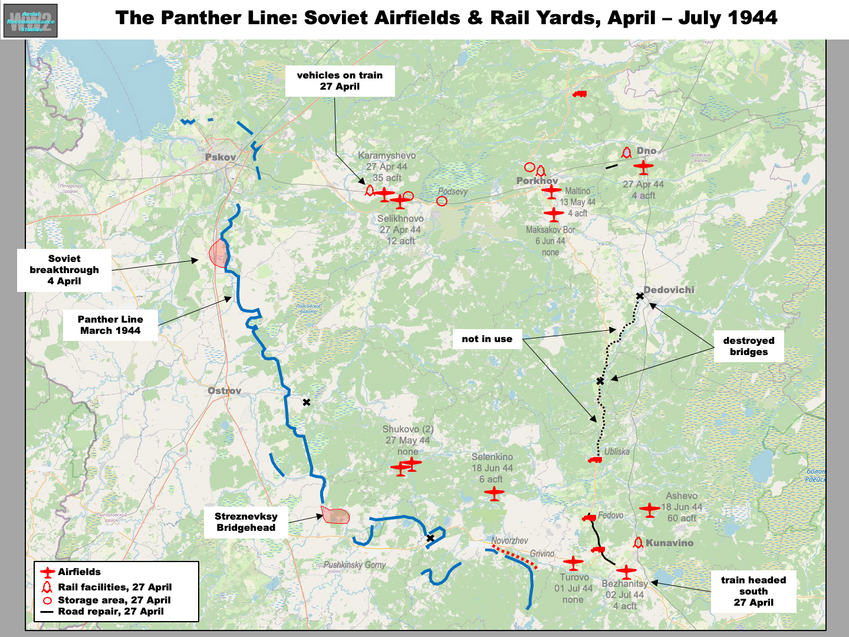 Less information is available about the situation in the relatively remote area southeast of Ostrov, along the Velikaya River and a tributary, the Reka Sorot' which was covered on 6 March and 2 July (Map 3).  Unfortunately, there was no available coverage in the center of this area --the so-called Strezhnevsky Bridgehead-- from where the 54th Army and 1st Shock Army launched the Pskov-Ostrov Operation on 17 July.  Good coverage north of the bridgehead on 6 March showed German positions along two distinct lines that employed extensive wire barriers.  Sorties from 2 July covered an east-west segment of the Panther Line between Pushkinsky Gorny and the town of Grivino that fell to elements of the 2nd Baltic Front on 12 July during the Rezhitska-Divinsk Operation.

Soviet activity continued southeast of Ramen'e along a railroad bed running behind front line. The rail bed was serving as a connector road between two major roads (Graphic 11)  More artillery was deployed Immediately south and west of Ramen'e, where a group of probable Katyusha multiple rocket launchers (MRL) was headed southwest (Graphic 12).  Seven kilometers to the southeast, a major truck park/storage area an area had been established around a quarry at the intersection of the railbed and Ostrov road.  Elsewhere in the town, artillery pieces were administratively parked in an open field of the town, suggesting the area served as a reserve or maintenance facility for artillery units in the area (Graphics 13 & 14).  Twelve kilometers to the south, an excellent example of a deployed MRL battery could be seen with an artillery battery (Graphic 15).

Soviet activity began immediately behind the front line at the village of Ramen'e, where three artillery batteries were deployed (Map 1, Graphics 9 - 11).  According to research by Mr. Eugene Matyukhin, this deployment belonged to elements of the 121st Heavy Artillery Brigade, 2nd Breakthrough Artillery Division of the Reserves of the Supreme High Command (RVGK) and positions did appear to be occupied by heavy 203mm Howitzers (B4). Logistical sites in the vicinity included three truck park/storage areas, a possible ammunition storage area and several bivouacs.  Two aircraft --an O-52 artillery spotter plane and a Soviet fighter-- were on the ground south of the town.

The Red Army reached German Panther Defense line between Pskov and Ostrov in late February 1944, at the end of the Leningrad-Novgorod Offensive.  The German defenses comprised the northern part of the much more extensive Panther-Wotan Line that ran between the Baltic Sea and Black Seas.  Only the northern section of these defenses remained in German hands in early March, when the Soviet 42nd, 54th and 67th Armies (3rd Baltic Front) faced the German 18th Army (Army Group North) in this area.  The Soviet armies were arrayed along roads leading to Pskov and Ostrov, with the 67th occupying the key position at the center of the front. It was in this area between 1 and 4 April that the Red Army was able to break through the German lines, forcing the Wehrmacht to fall back in the direction of the Velikaya River.  The front remained static until July, when the Red Army launched the Pskov-Ostrov and Rezhitska-Divinsk Operations.