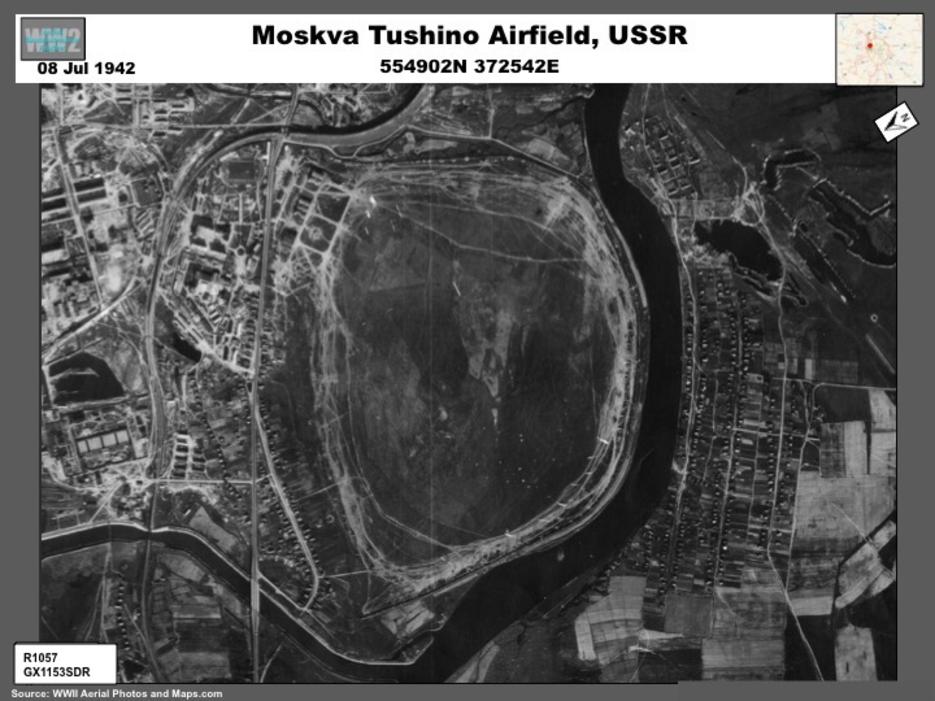 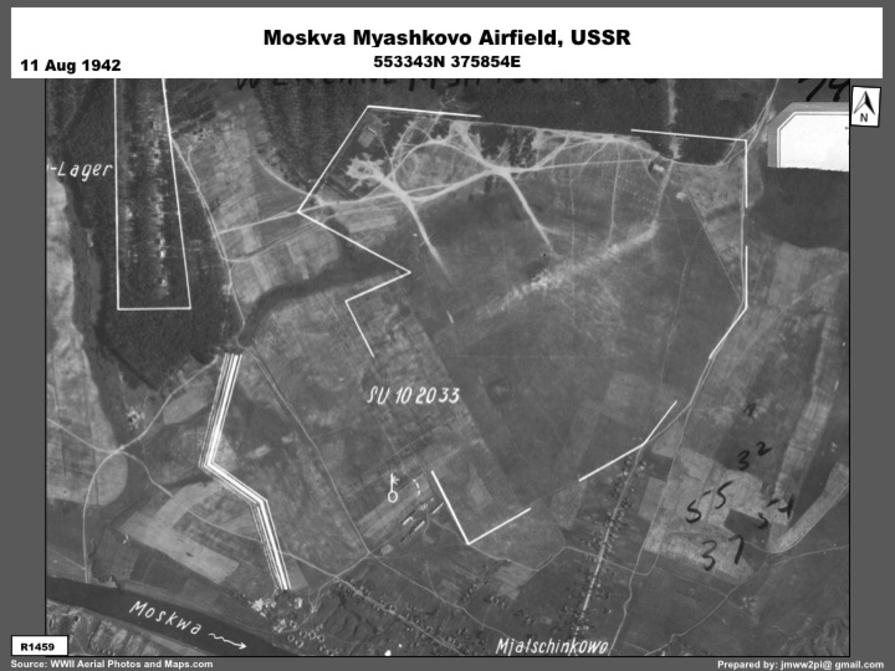 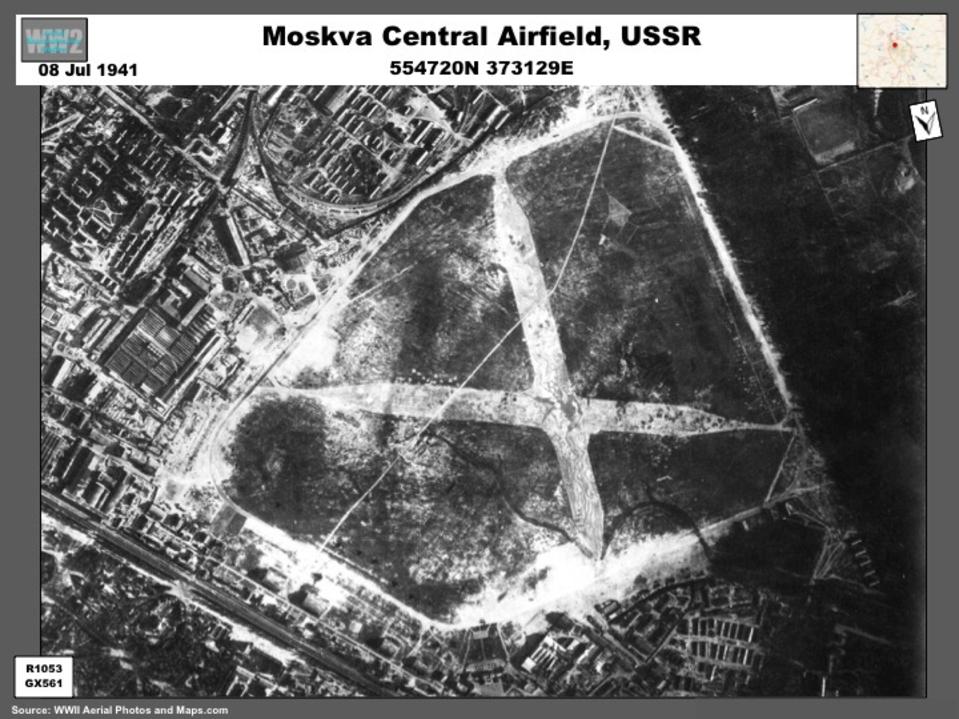 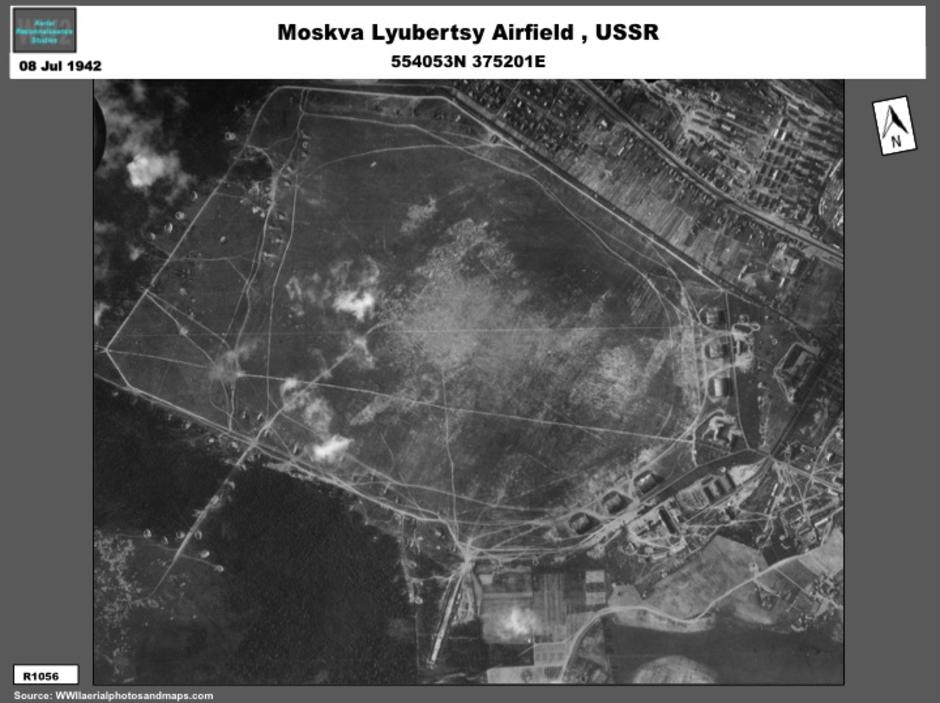 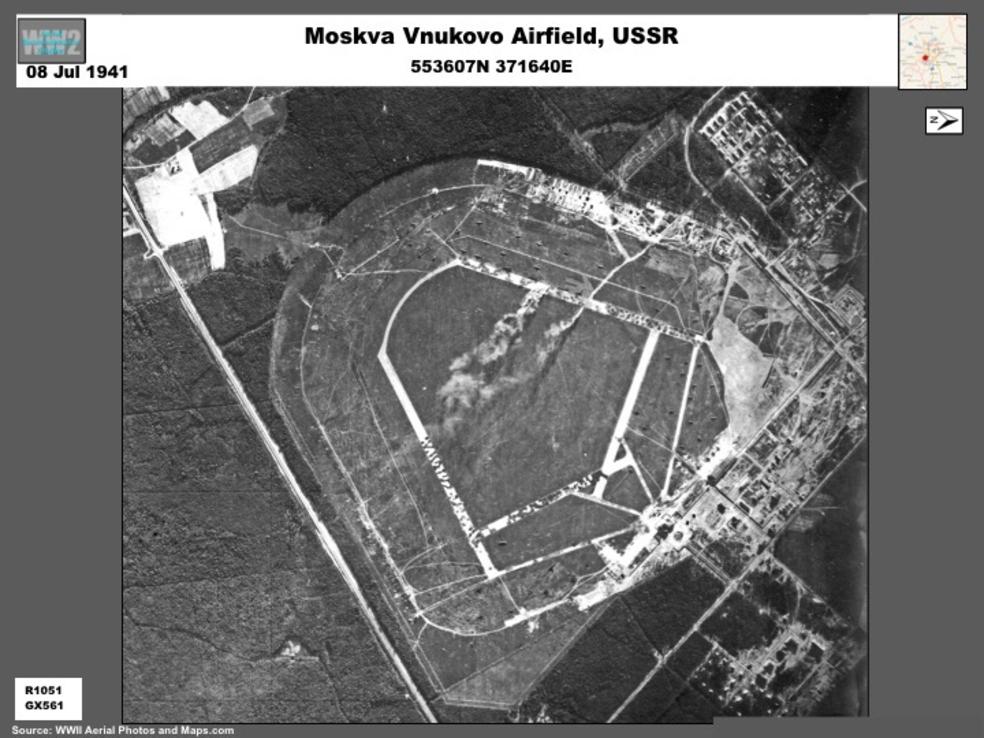 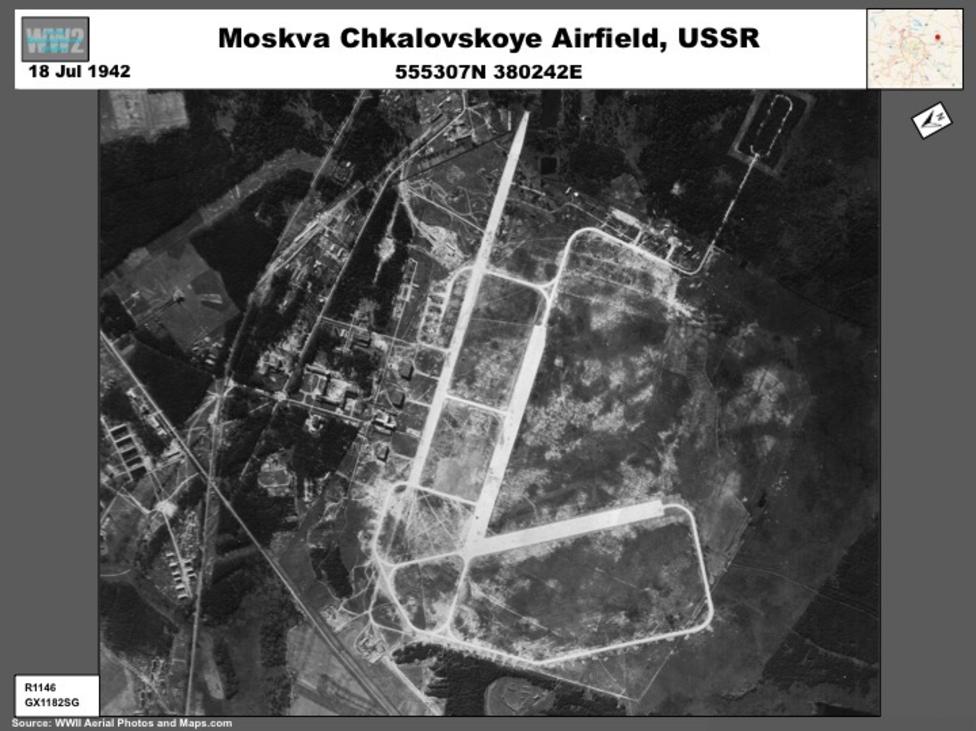 Khimki, below, had an AOB that included one TB-3 and about 10 other aircraft.

The existing Luftwaffe reconnaissance imagery of the Moscow area provides coverage of 20 airfields and two aircraft factories (Maps 1 and 2).  Many of the airfields had rercently been upgraded with hard surface runways and improved support facilities. 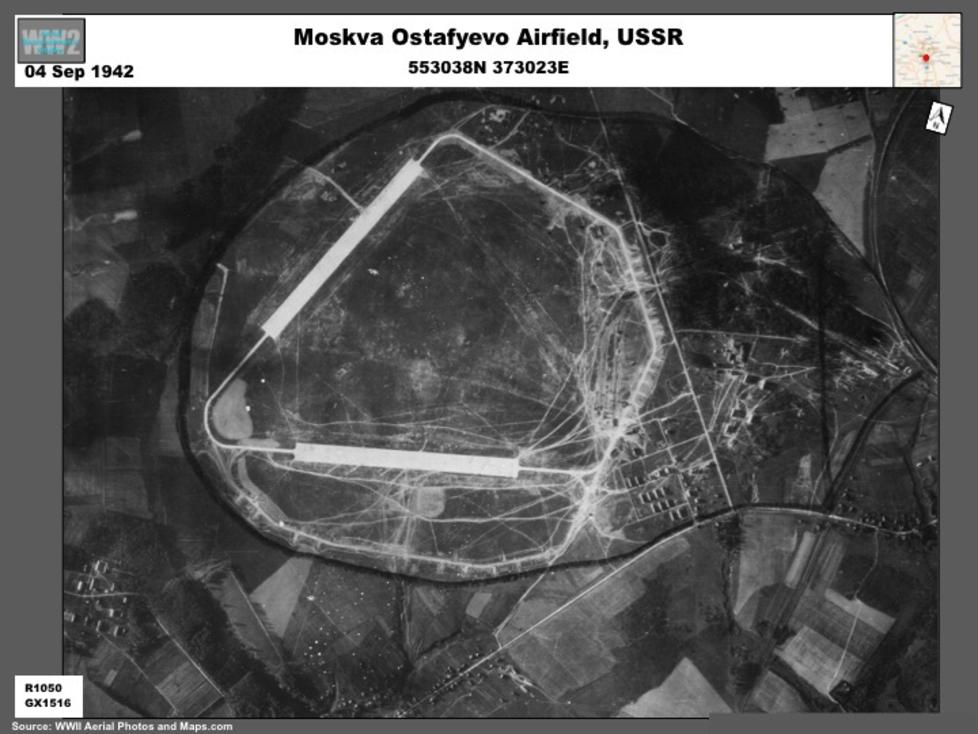 Concrete runways were still under construction at Kubinka in July 1941 (below).

Ramenskoye (below) was occupied in July 1942; visible AOB was about 20 aircraft including one TB-3 and 2 possible SB. 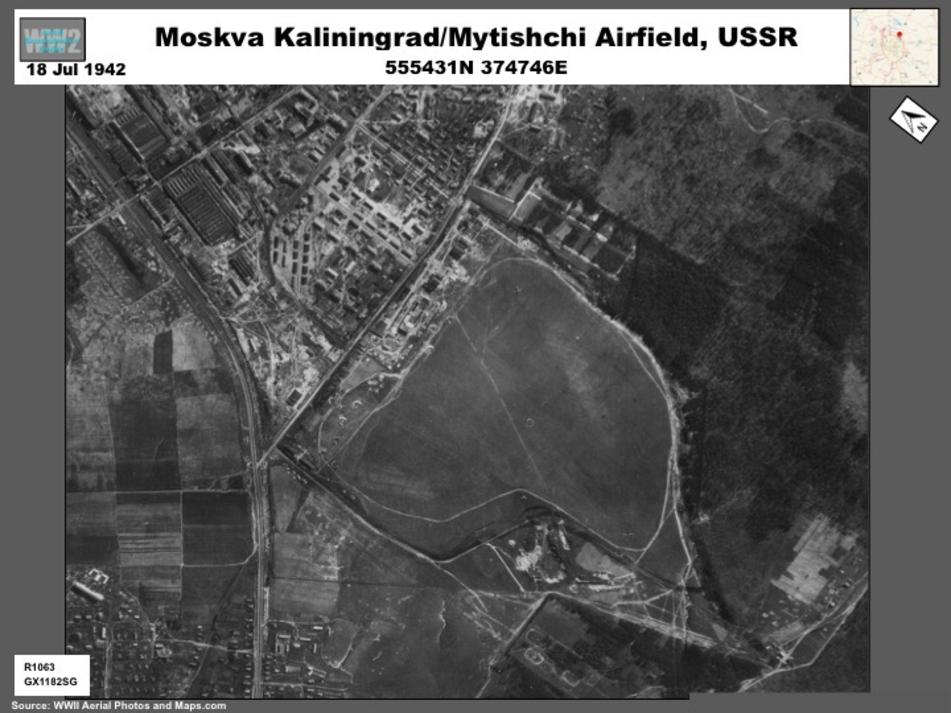 Ostafyevo, below was a major base, but only occupied by five possible aircraft. 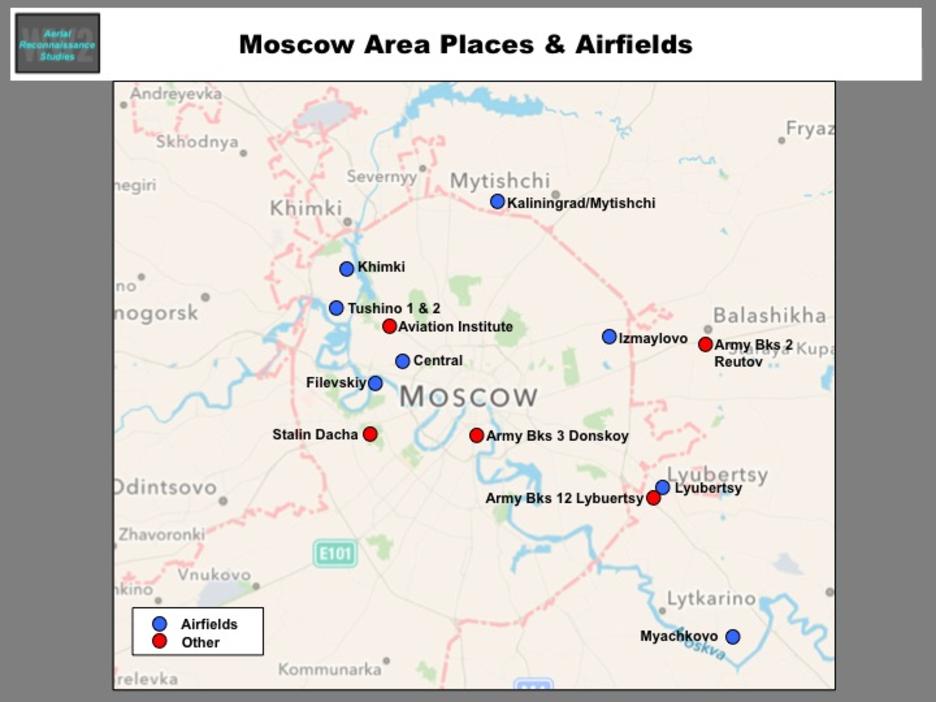 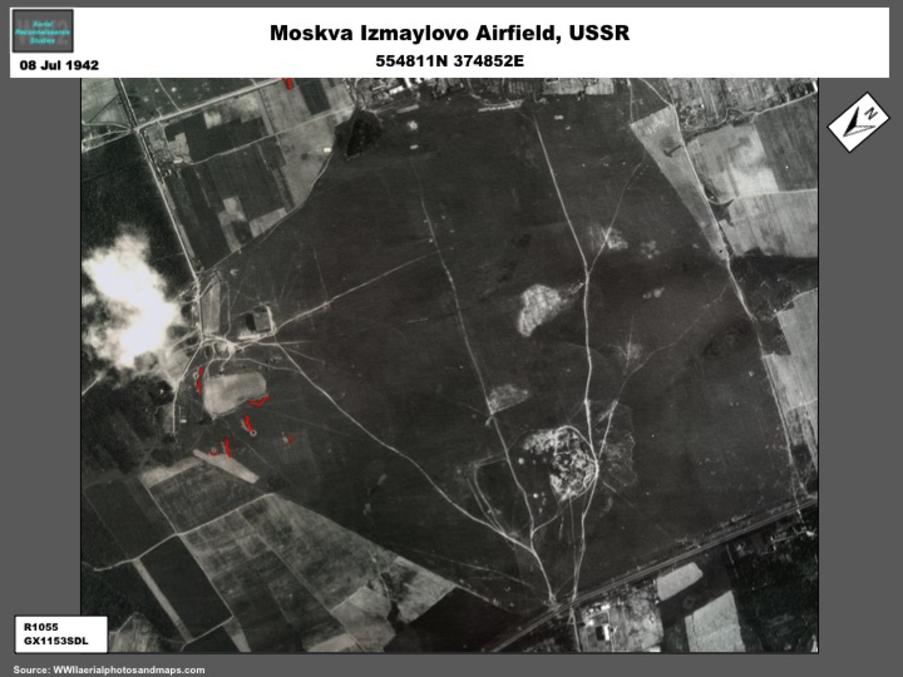 Lyubertsy (below), southeast of Moscow, was a a major base; AOB was about 30 aircraft including five bombers of unidetified type. 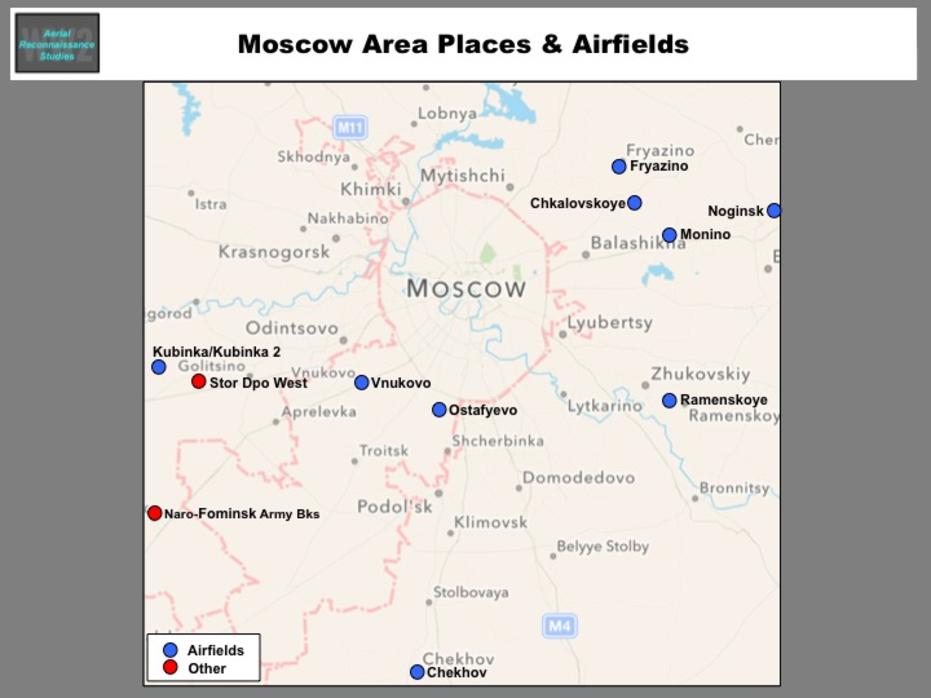 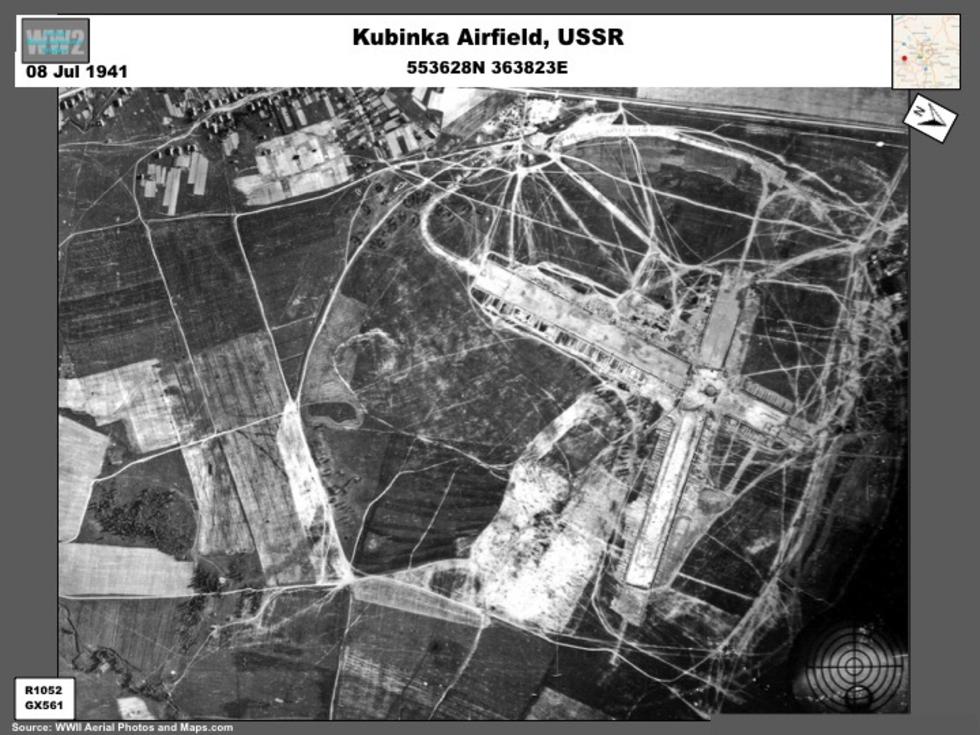 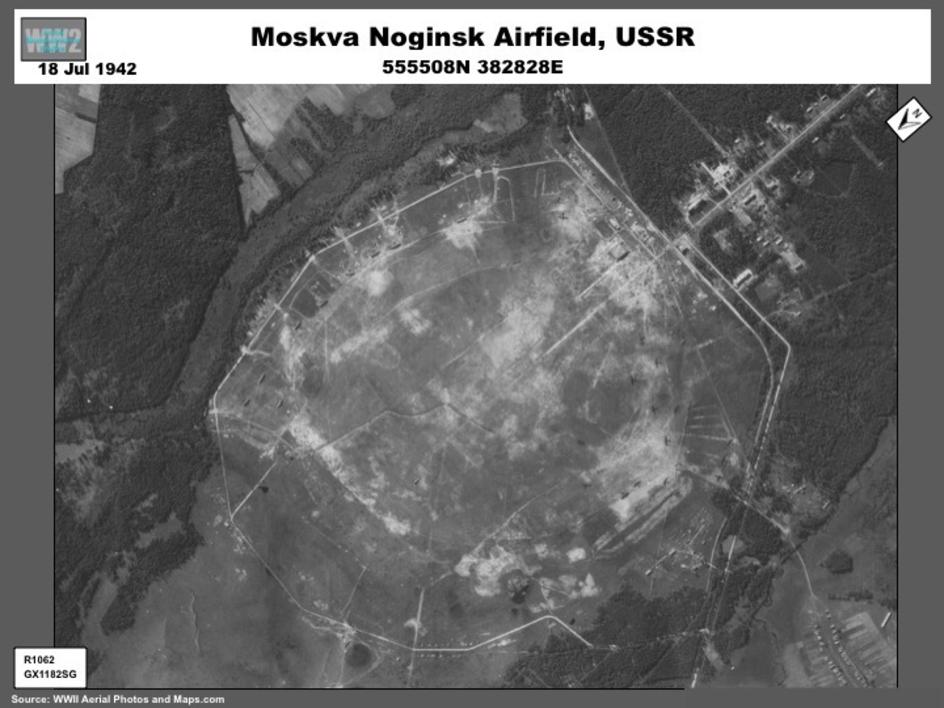 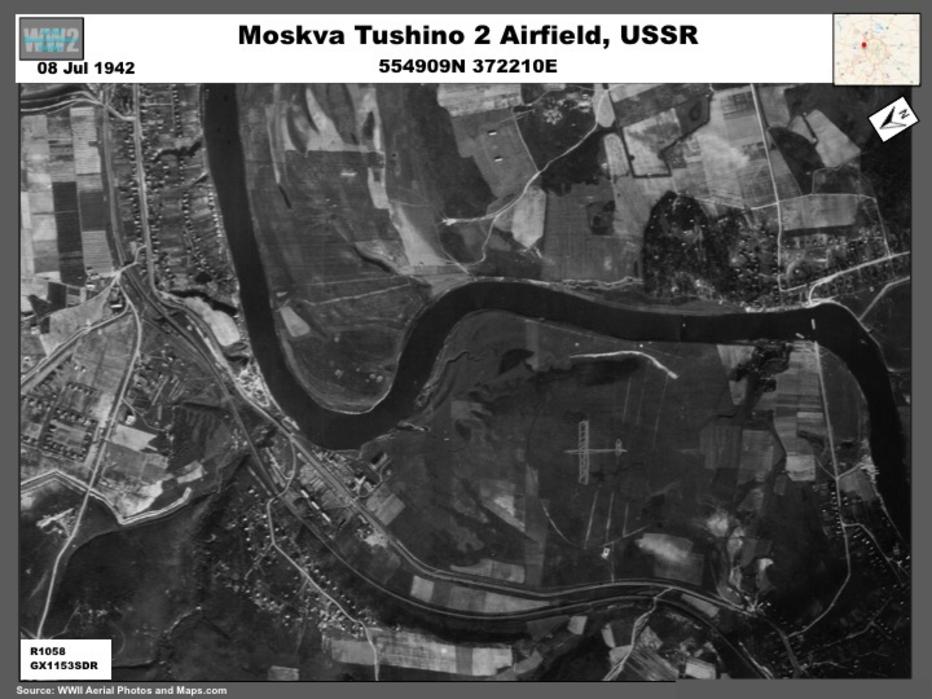 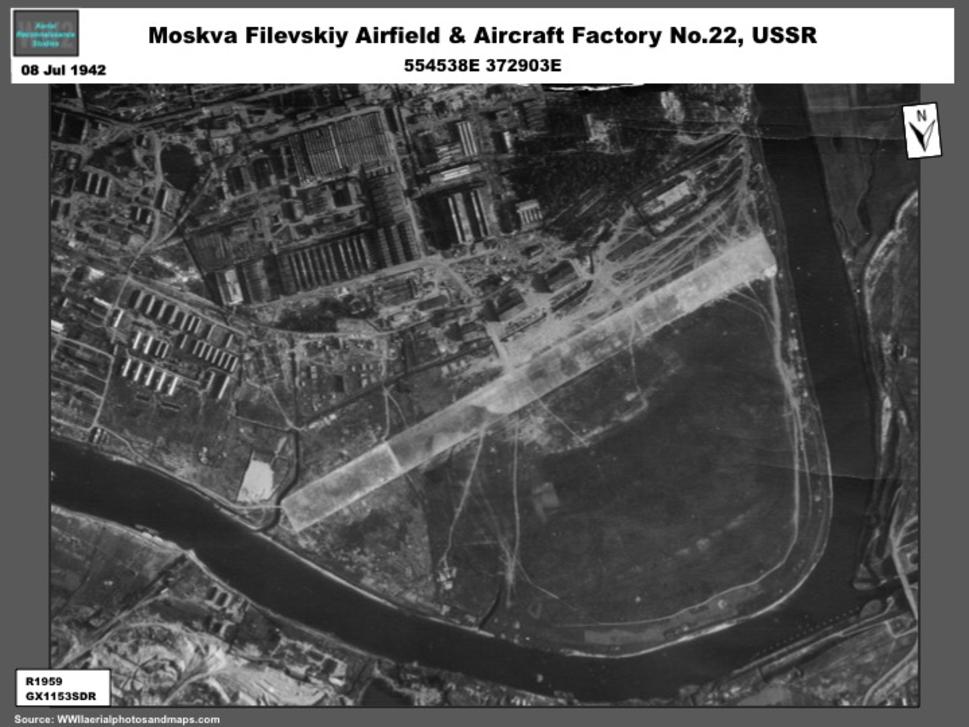 ​Chkalovskoye, in Moscow's northeast suburbs, is an excellent example soviet airfield renovation and appears much the same today. AOB was about 80 aircraft, including one TB-3, 18 LI-2, four possible SB, 17 possible PE-2, and 40 single-engine.

The field at Chekhov, 70 km south of Moscow had been recently improved with an all-weather runway; a small bivouac nearby may have supported the construction.  The field still serves as a small local airport. 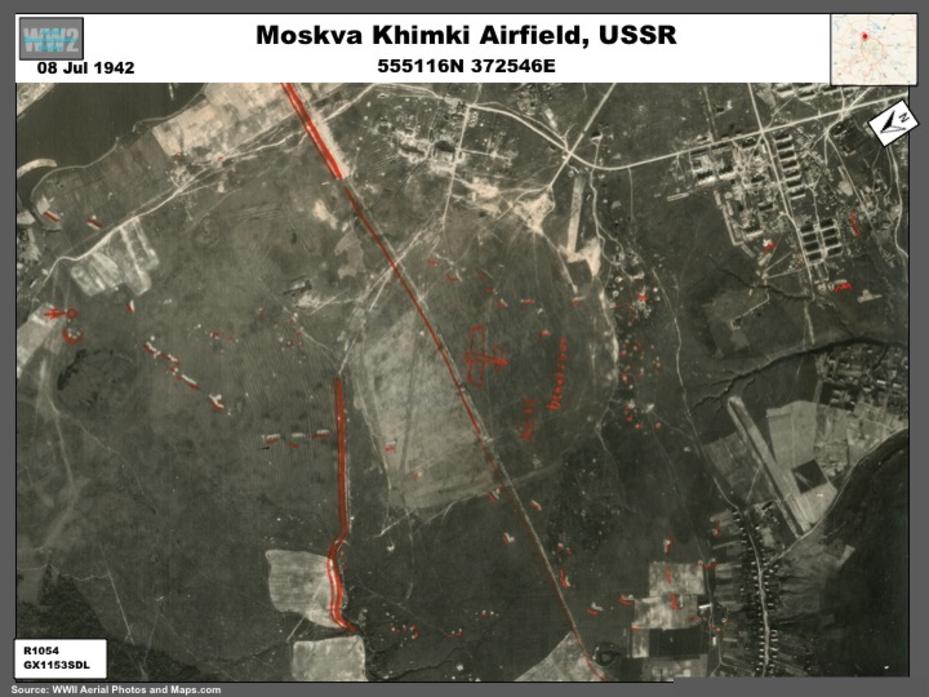 Fryazino (below) had an AOB of about 55 aircraft, including one probable TB-3. 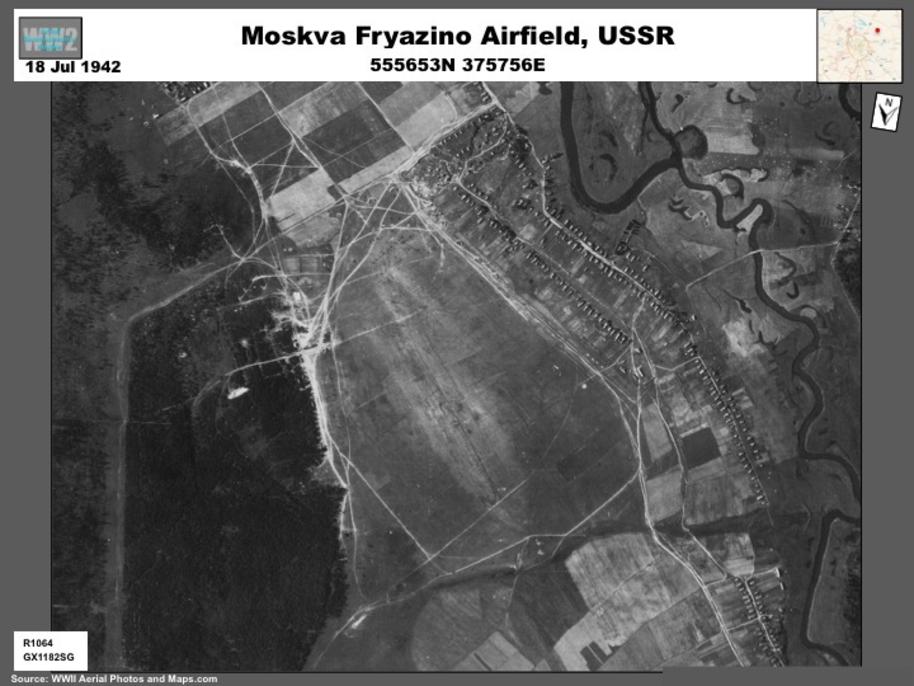 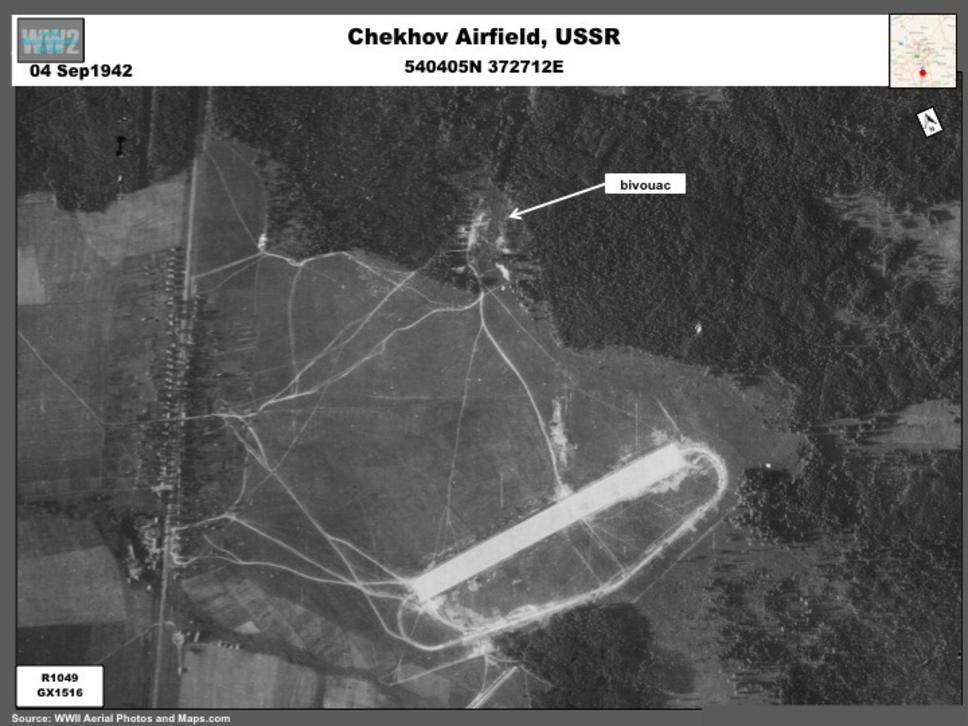 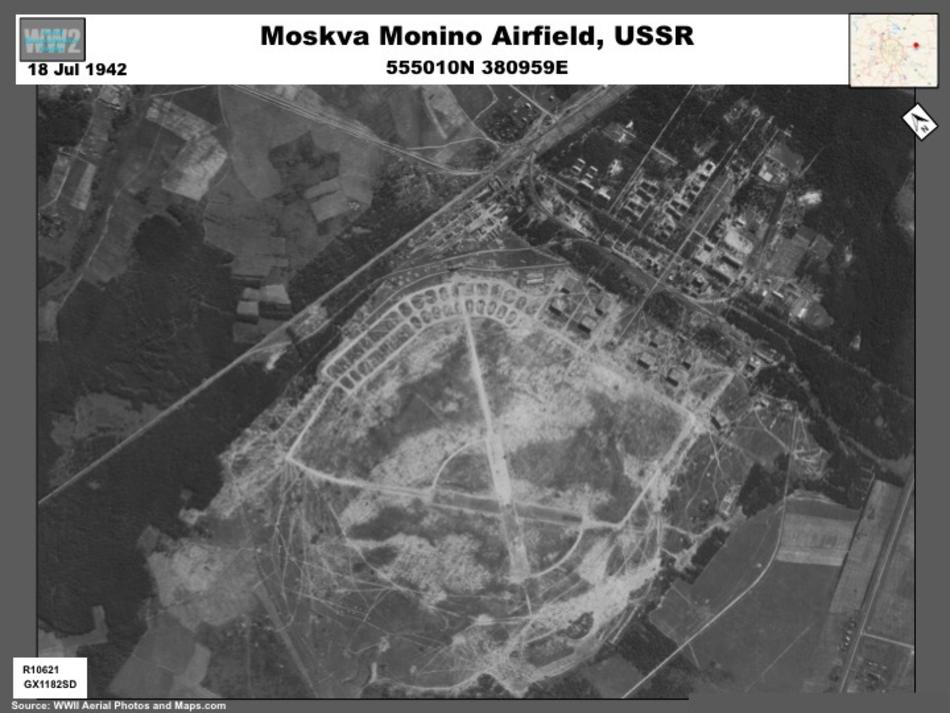 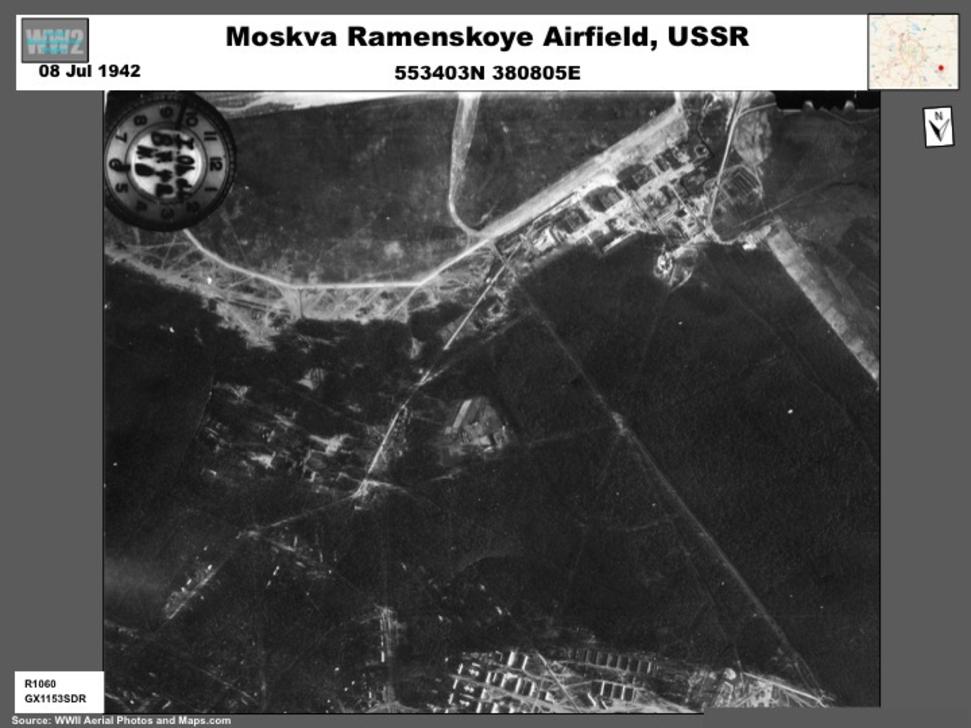 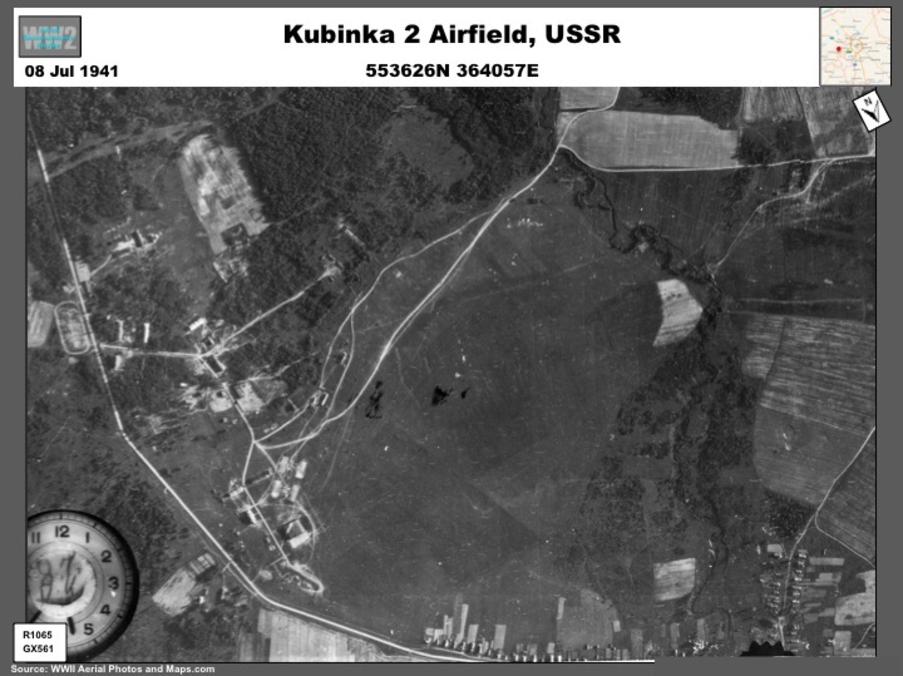 Monino (below) was occupied with one TB-3, 52 twin-engine, and 22 single-engine aircraft. 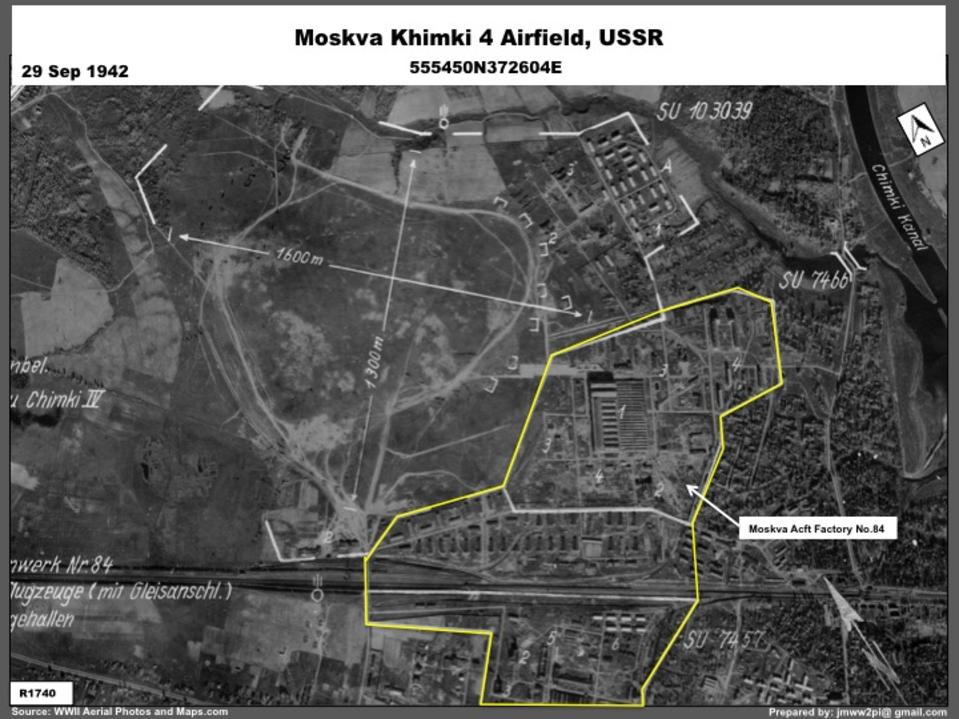 The remaining airfields varied in quality and importance. The Central Airfield (below) served as Moscow's main airport until after the war.  In 1941 it was serving a a military field with at least 55 aircraft present.

Tushino, Tushino 2 and Khimki Airfields (below) were located in the western edge of the City and newly constructed defenses could be seen in the vicinity.  Tushino had about 20 unidentified aircraft and Tushino 2 was an alternate field.  The AOB at Khimki was about 10 aircraft, including one TB-3.  Other airfields below were unoccupied.

Six of the 20 airfields covered in 1941 and 1942 --Vnukovo, Ostafyevo, Chkalovsloye, Kubinka, Ramenskoye/Zhukovskiy, and Chekhov-- had undergone improvement and are still operational today.  Vnukovo (below) was constructed in 1937 to replace the city's main airport, the Central Airfield.  The field, which is Moscow's oldest operating airport, was used as a military base until the end of the war.  On 8 July 1941 smoke pots were  in use in an attempt to obscure the field; note the disruptive painting on the runways.  Air order-of battle (AOB) was about 50 aircraft, including one TB-3 heavy bomber, 20 LI-2, and nine poss IL-4/SB bombers.