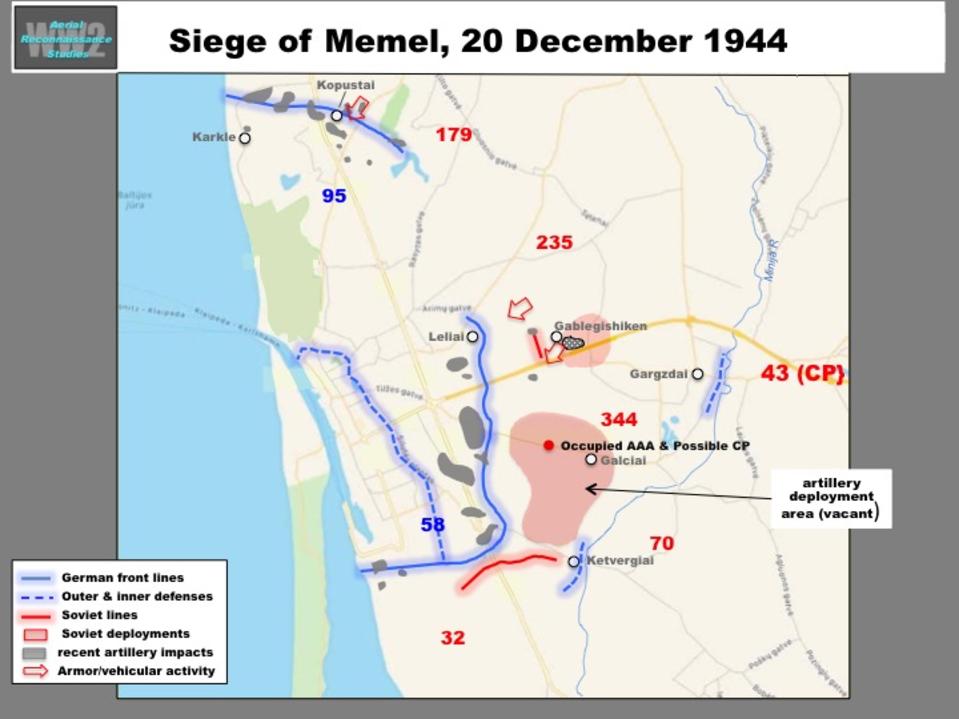 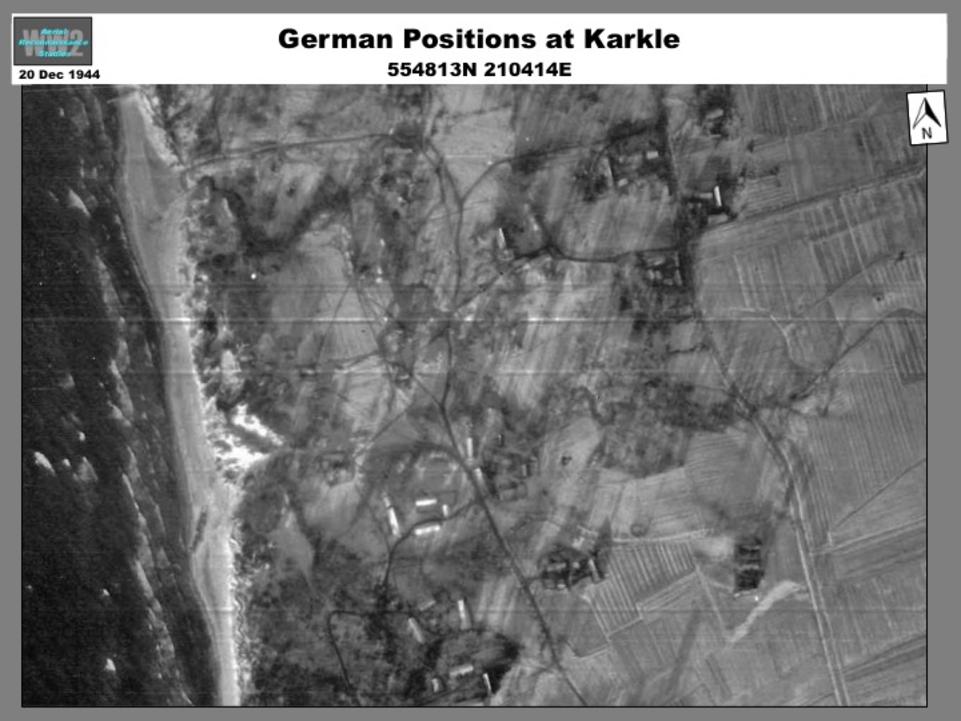 The siege of Memel was conducted mainly by the Soviet 43rd Army (1st Baltic Front; Map 1).  A German situation map from 1 January 1945 showed five subordinate rifle divisions --the 32nd, 70th,179th, 235th and 344th-- deployed around the German lines. The Germans were dug in along a perimeter of between 5 and 15 km around city center that comprised the city's middle defense line; the city's outer defenses along the Minija River were breached by October.

Several areas inside the city had sustained heavy damage. Evidence of heavy vehicular activity could still be seen on city streets, and a locomotive was under way at the north end of the port  (Graphics 8 & 9).  A  transport ship and seven smaller craft were at the quay nearby. 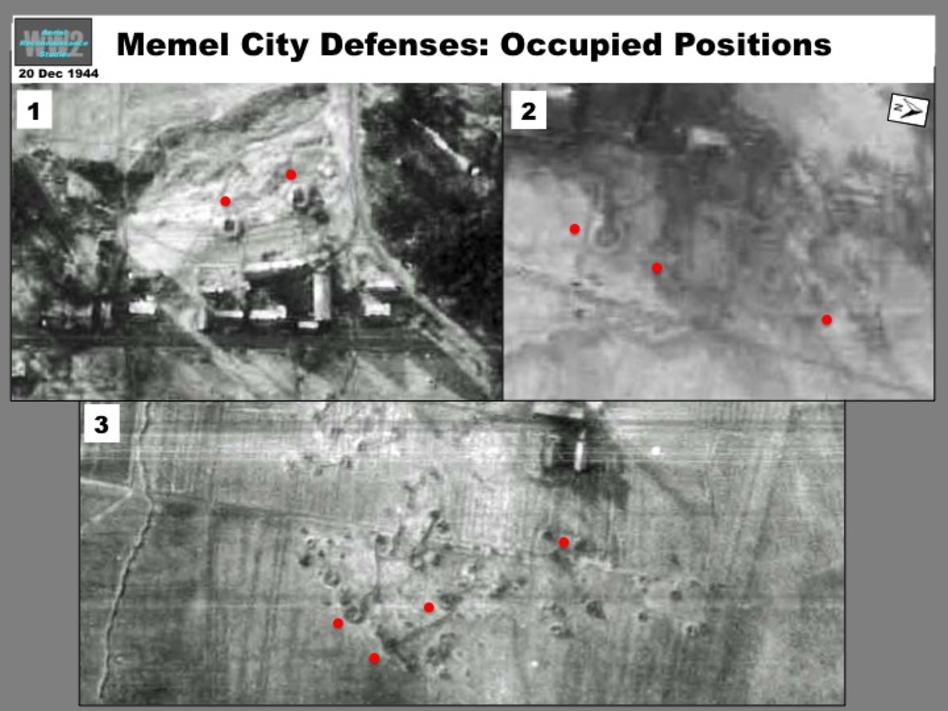 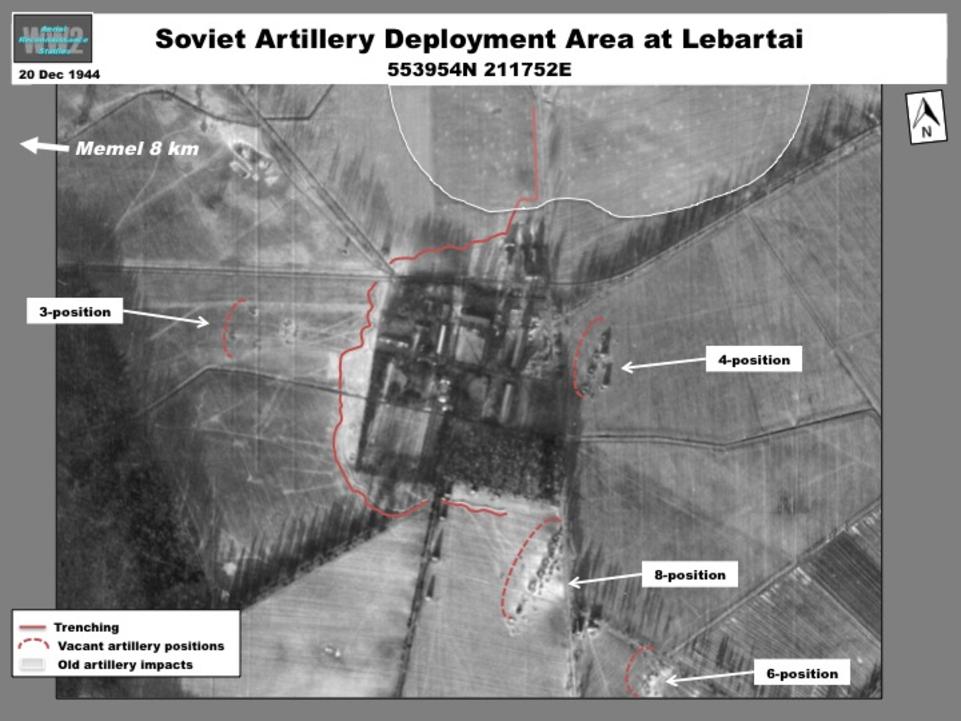 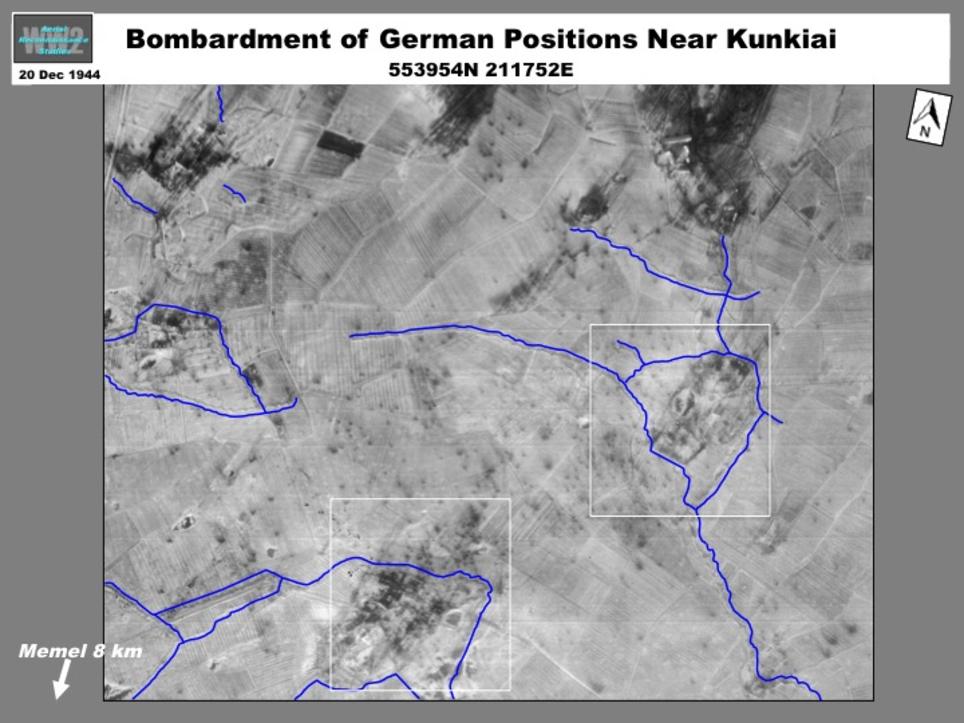 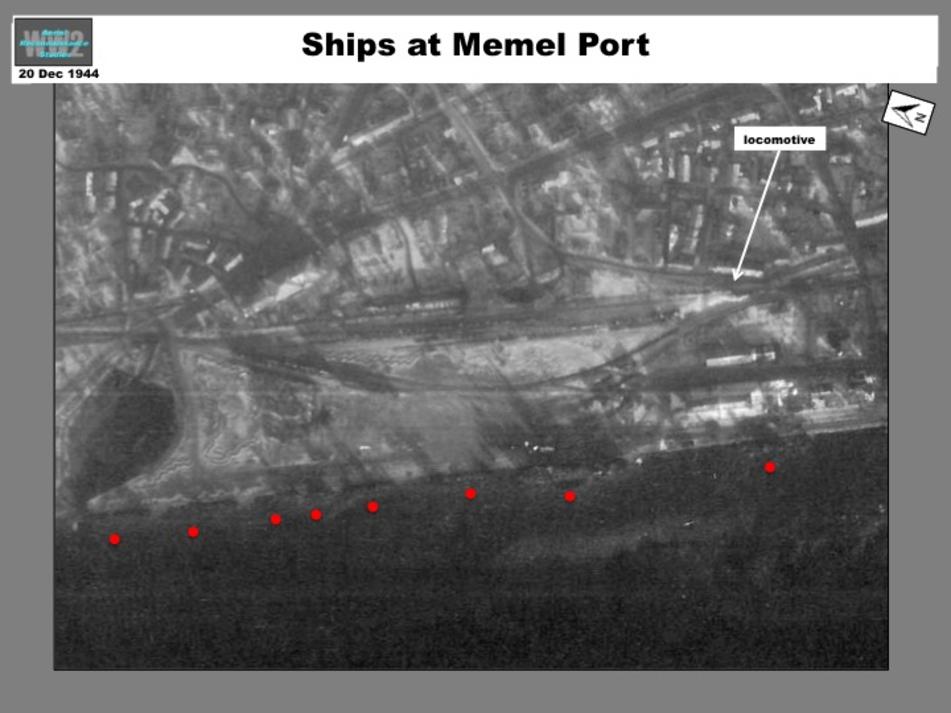 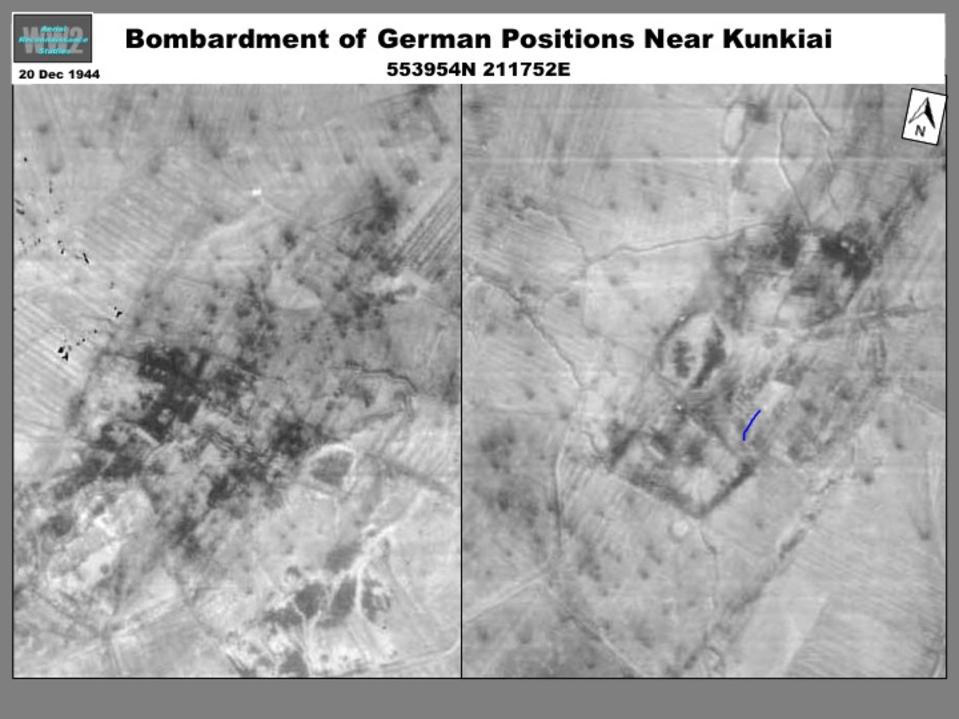 A possible Soviet command post and three occupied anti-aircraft (AAA) sites were deployed near the present day town of Galciai 8 km east of Memel (Graphic 1).  A large number of vacant Soviet artillery and AAA positions (a few with recent track activity) were concentrated in the surrounding area (Graphic 2) indicating an earlier, much larger Red Army presence.  The artillery positions were arranged in groups of three to twelve.

The Baltic port of Memel (Klaipeda) was imaged by Luftwaffe reconnaissance on 20 December 1944, two months after the city was cut off from East Prussia by the Red Army. An analysis of the available imagery provides a good look at the military situation inside and around the snow-covered city.  The German positions --occupied by the Wehrmacht 58th and 95th infantry divisions-- had been under recent bombardment all along the front.  Although the lines appeared to be static, there was evidence of recent Soviet attacks in two sectors.  Memel was finally abandoned on 28 January 1945; coverage on 21 February 1945 showed the city and and limited Soviet activity. 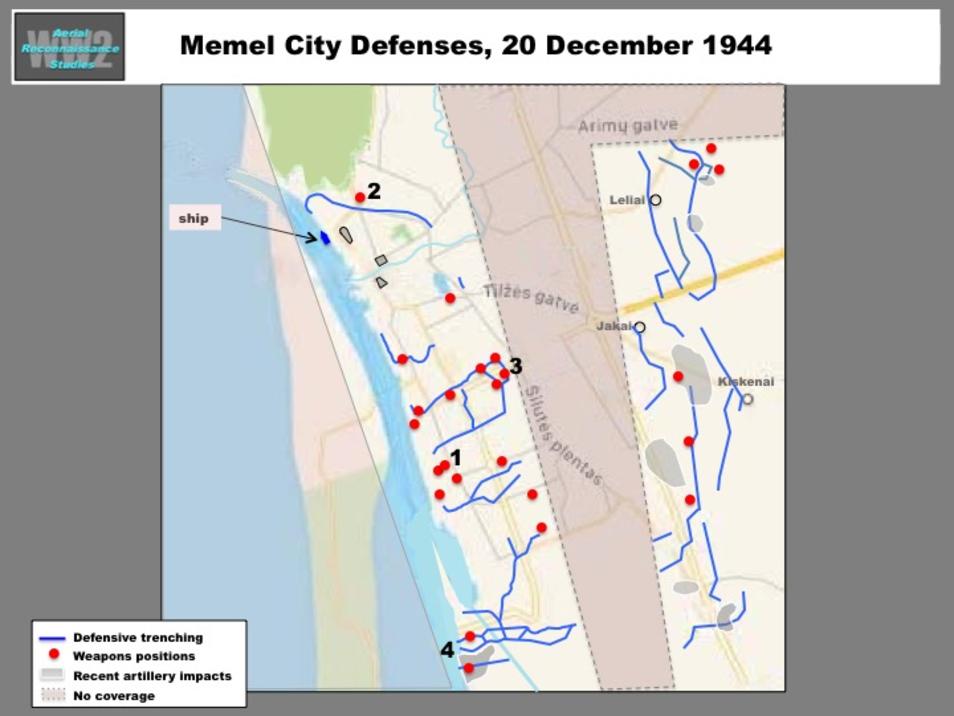 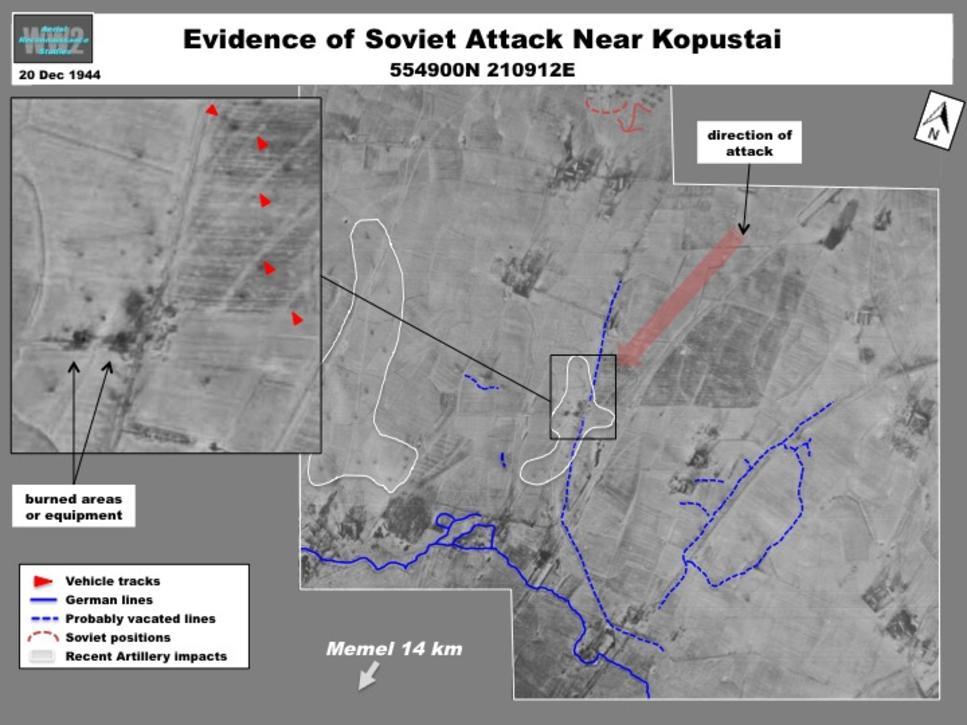 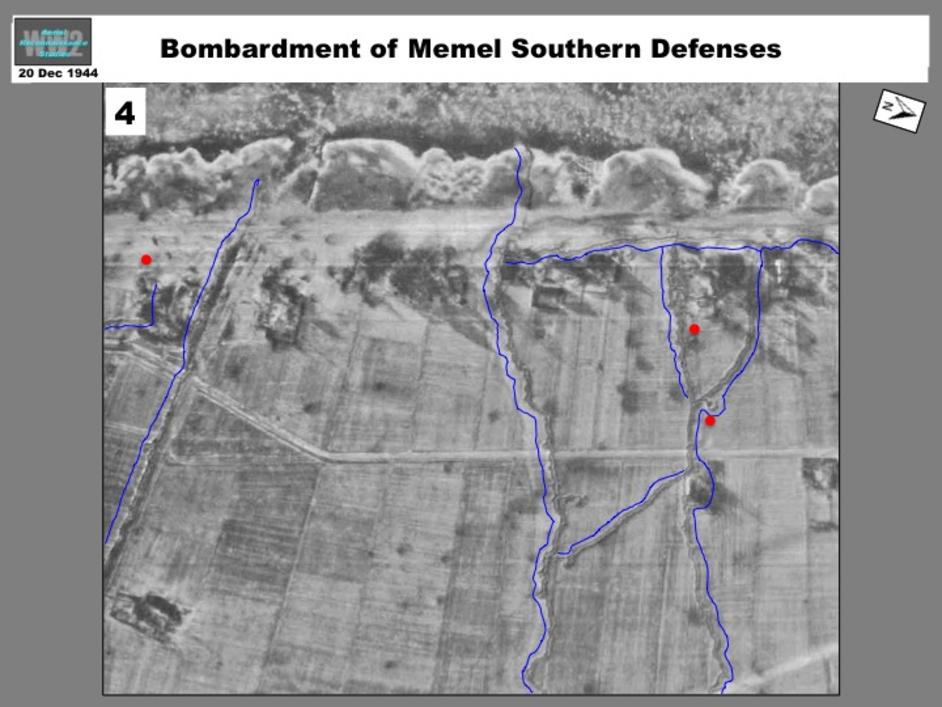 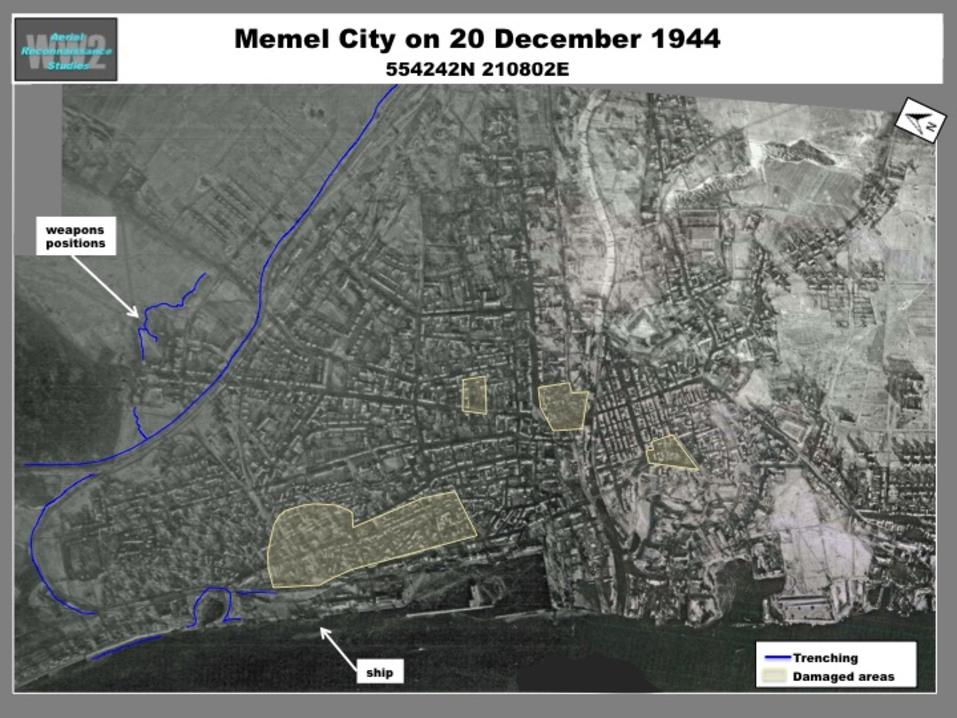 Subsequent coverage of Memel on 21 February 1945 showed the city abandoned (Graphic 10).  Two key city bridges and several additional areas had been destroyed since December 1944; a fuel storage area at the north end of the port was probably destroyed by the departing Germans. The city appeared to be only sparsely occupied by the by the Red Army, although the presence of a probably occupied AAA site at the entrance to the harbor indicated some defenses had been set up.  The only evidence of activity in the city was on a north-south corridor, indicating most traffic was passing through to the south.  A group of at least 12 trucks was probably headed south on the road 4 km south of the city center (Graphic 11).

The front was mostly static, but evidence of recent Soviet vehicular activity could be seen in two areas.  It appeared the Soviets had staged an attack involving a small number of armored vehicles nearr present day Kopustai, on the north side of the front line (Graphic 3)  The tracks --indicating there were about six vehicles-- converged on an area just outside the German lines, where a concentrated area of small impacts probably came from a German counterattack. Three burned areas, possibly vehicles, could be seen. Recent vehicle tracks could also be seen near a farm complex (Gablegishiken), where there were a number of destroyed buildings. 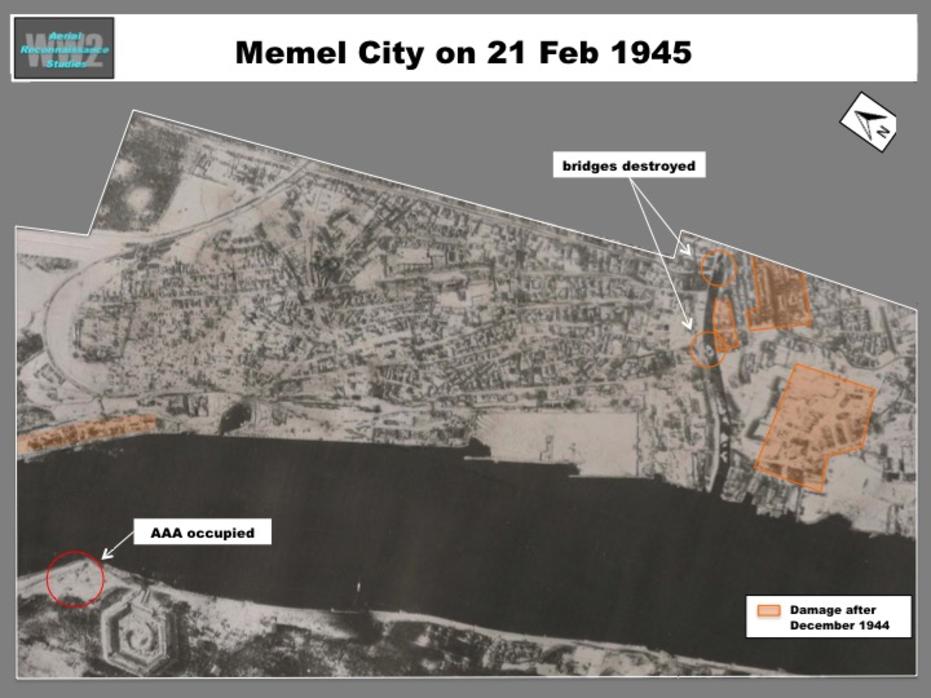 Although there was not much evidence of Wehrmacht activity, trackage could be seen around buildings near the lines at the coastal settlement of Karkle (Graphic 6) 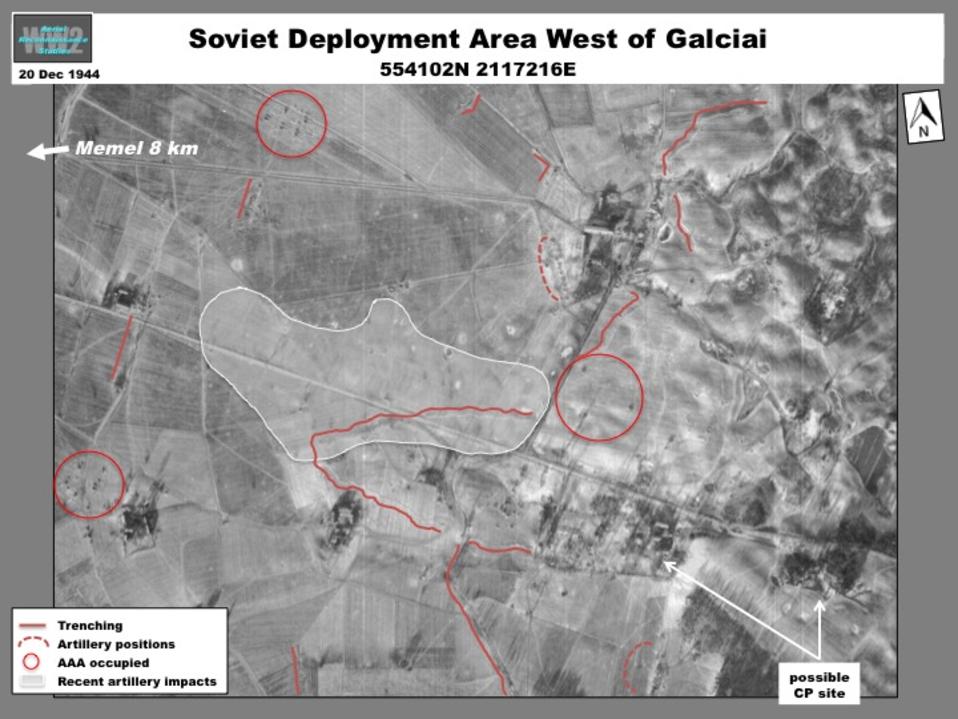 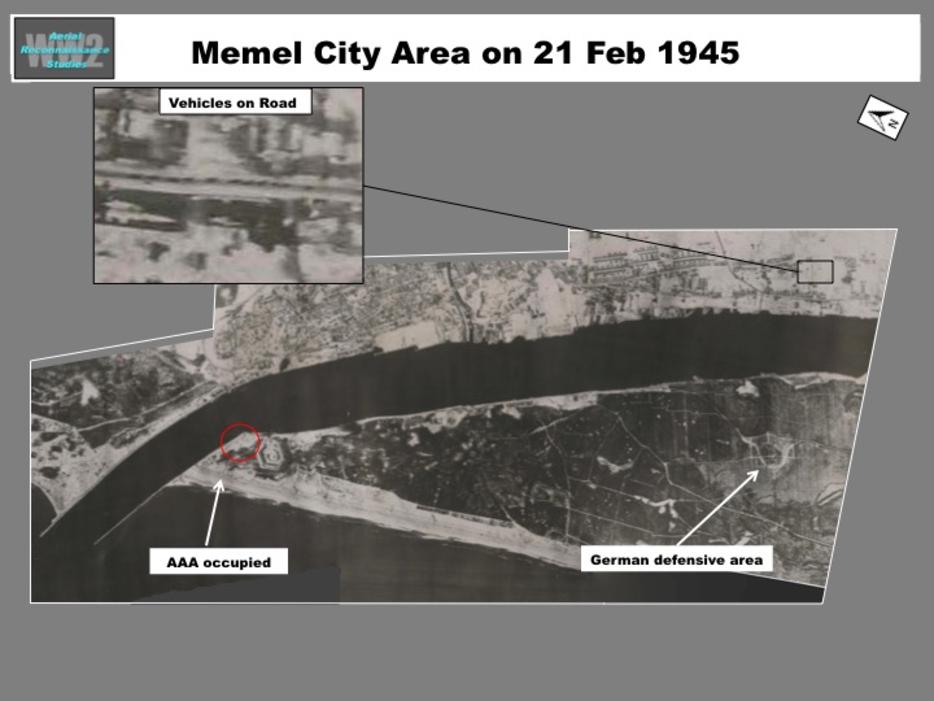 German positions had been under recent bombardment all around the perimeter, including positions immediately south of the town (Graphics 4 & 5); impacts in a few areas suggested a limited German response. The size of the impacts indicated different types of artillery.  Most of the bombardment appeared to have come from the south/southeast.