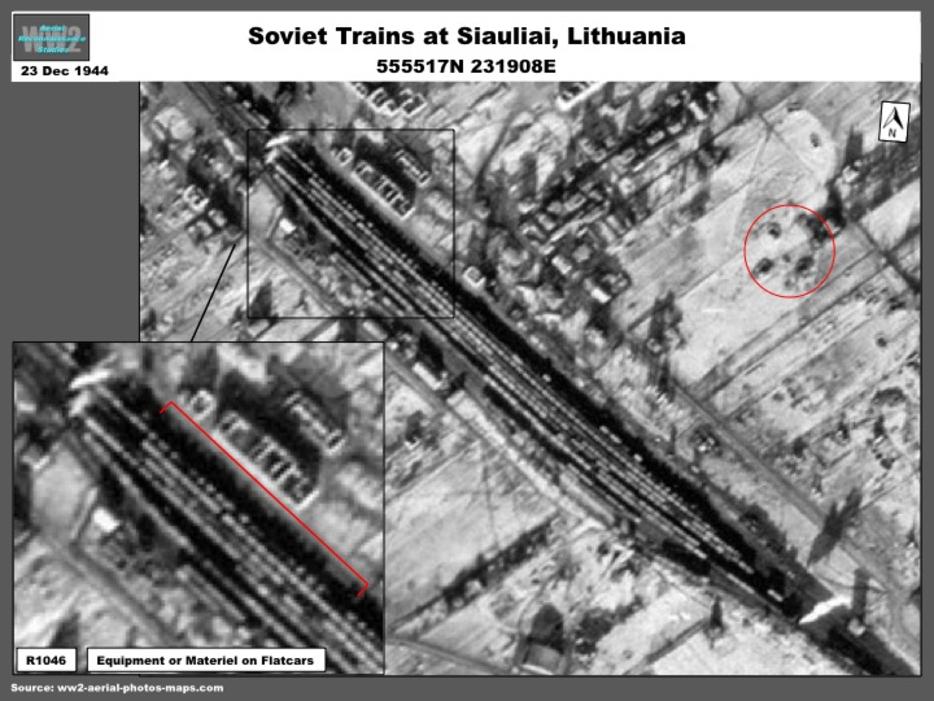 Abandoned Luftwaffe airfields in Soviet rear areas became bomber and logistics bases despite attempts to render them inoperative  Runway demolition that included cratering  and plowing grassy areas seldom denied the use of any airfield to the Soviets (see earlier article).  Recently discovered imagery of the ex-Luftwaffe airfield at Siauliai (Schlauen) revealed elements of two probable PE-2 tactical bomber regiments (at least 104 aircraft) were deployed there on 27 October 1944 (Graphic 12). With a 1900-meter hard surface runway, maintenance facilities and two dispersal areas with all-weather shelters, Siauliai was a major base. The Germans attempted to crater the airfield's surface by detonating hundreds of small explosives, but these likely had likely been repaired (Graphic 13). All other facilities were left intact. Tents could be seen in a wooded area near the dispersal areas.  A high level of activity was observed in the airfield support area where a number of aircraft and vehicles were in the vicinity of hangars (Graphic 14).

An IL-2 regiment was operating at Vegeriai Airfield on 21 December (Graphic 8).  Preparation of the runway required the filling of a trench near where possible smoke pots had been activated to conceal a group of 14 IL-2's. 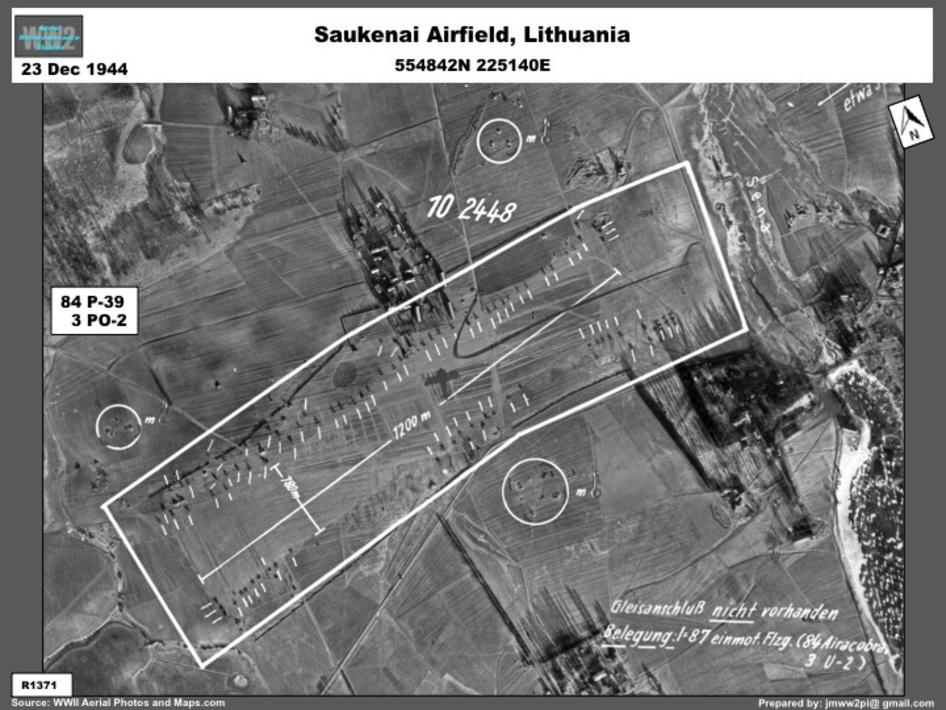 Fighting was taking place in Vilnius, home to two major Wehrmacht vehicle repair depots (HKP; Graphic15).  On 7 July fires could be seen at several locations in the city.  A short distance to the southwest, dust could be seen from convoys southwest of the city (Graphic 16).  The convoys were very likely advance elements of the Soviet 5th Guards Tank Army which were sent to encircle Vilnius in early July. 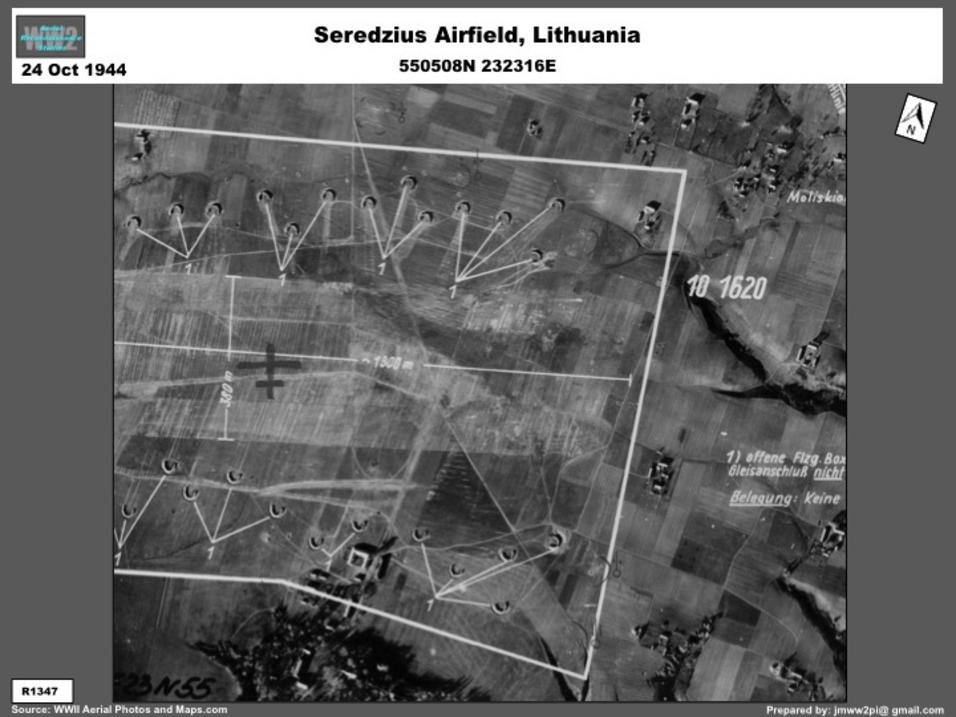 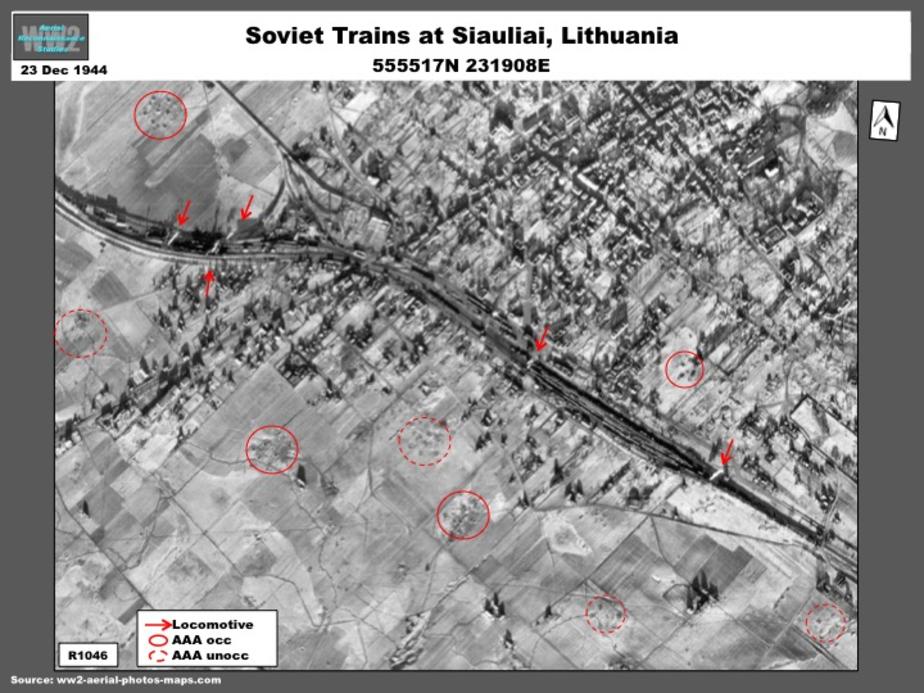 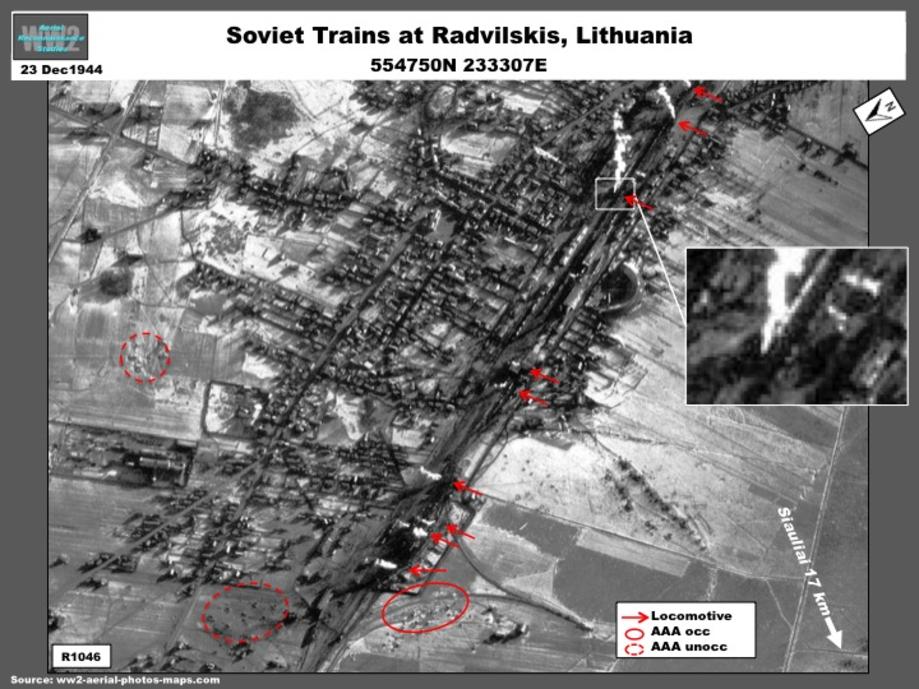 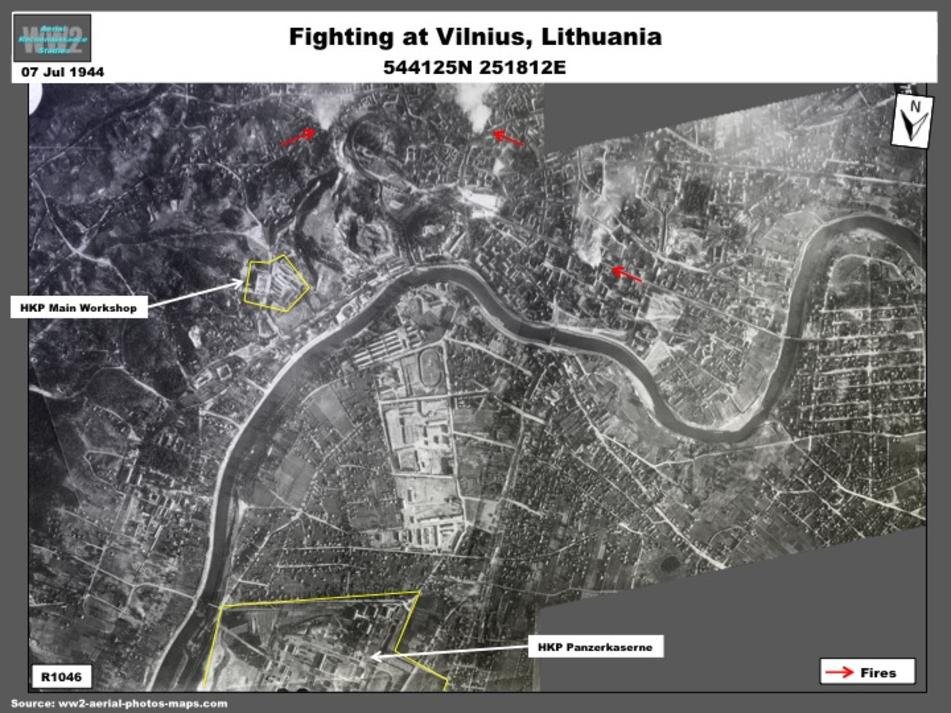 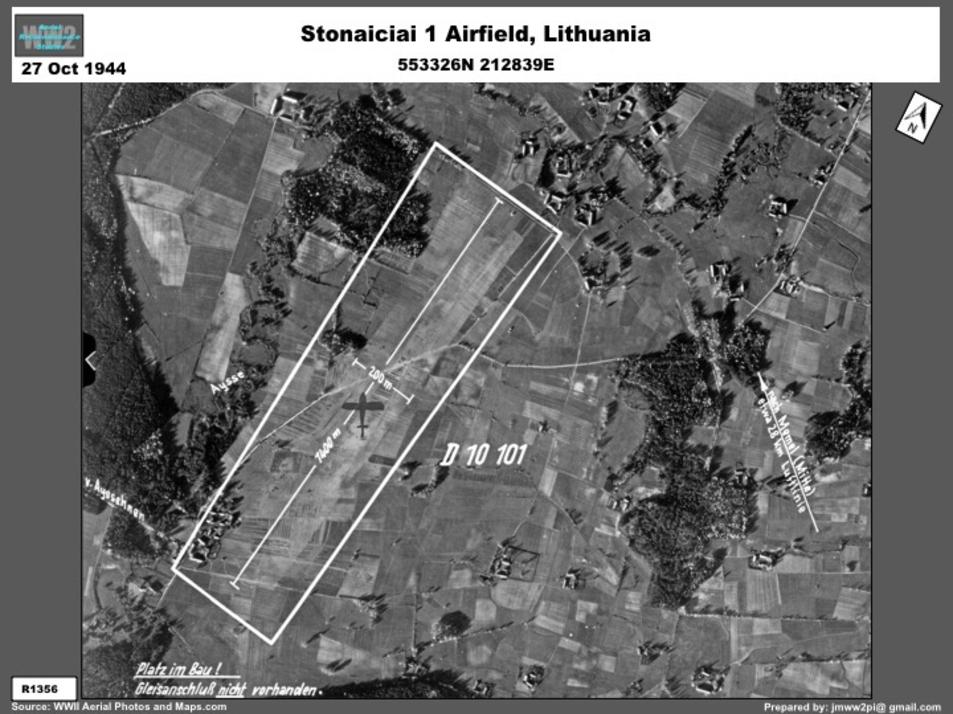 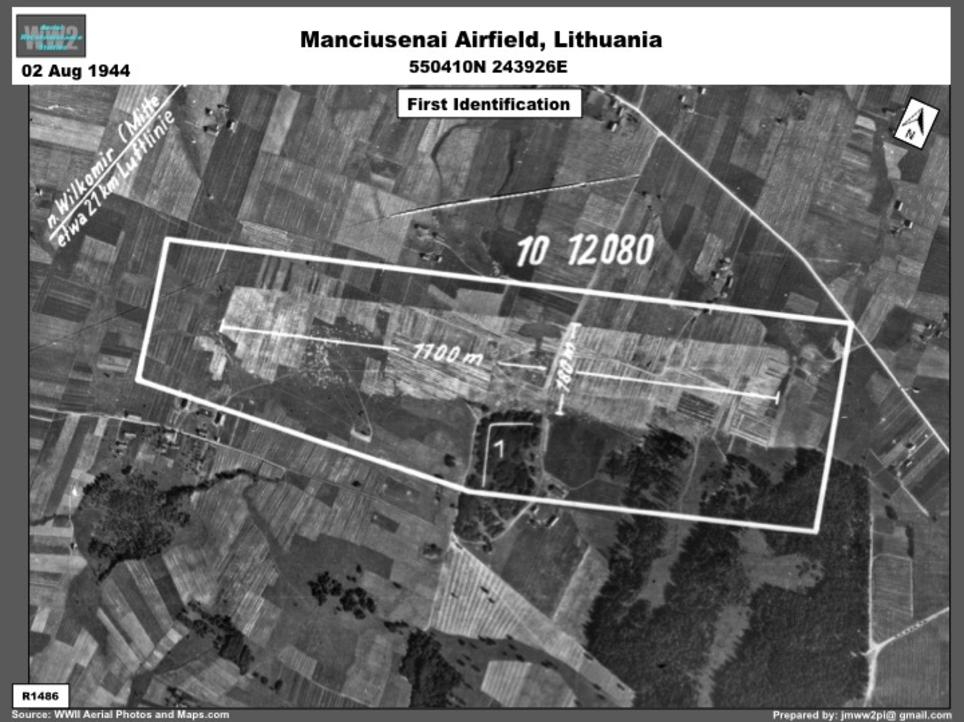 Airfield construction continued into the Fall of 1944.  The rolled grass runway at Stonaiciai (Graphic 6, below) --28 km southeast of Memel-- was one of the first Soviet targets identified in German territory (Memelland), hence the target number, D 10 101. 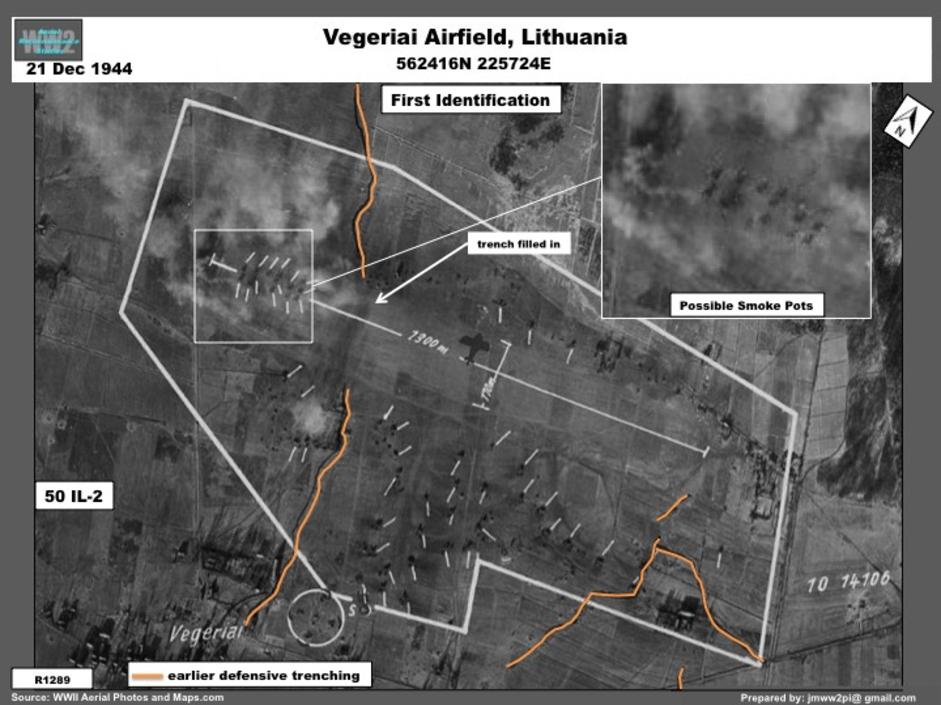 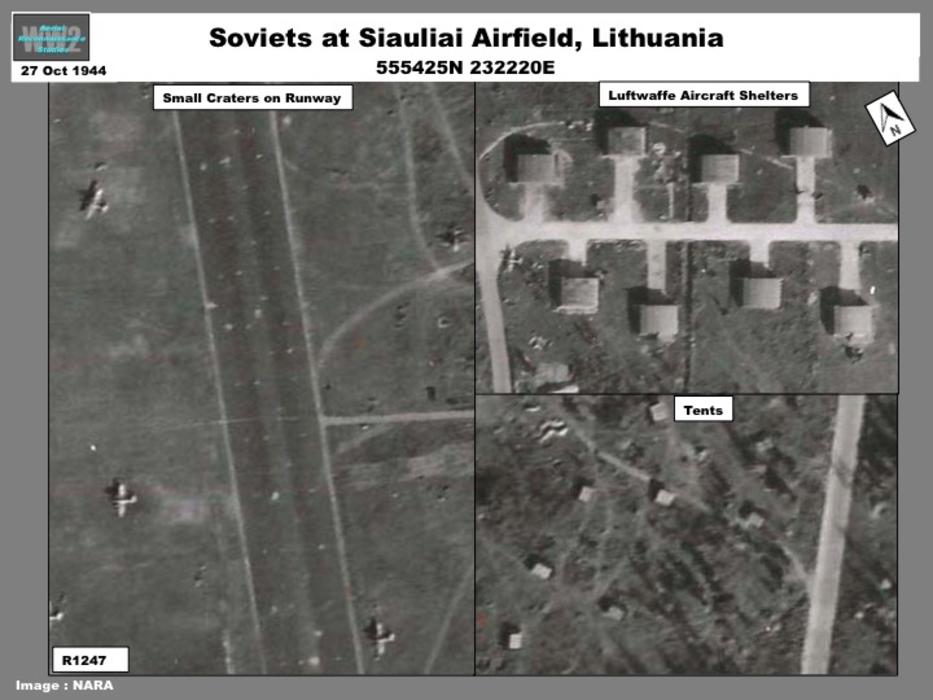 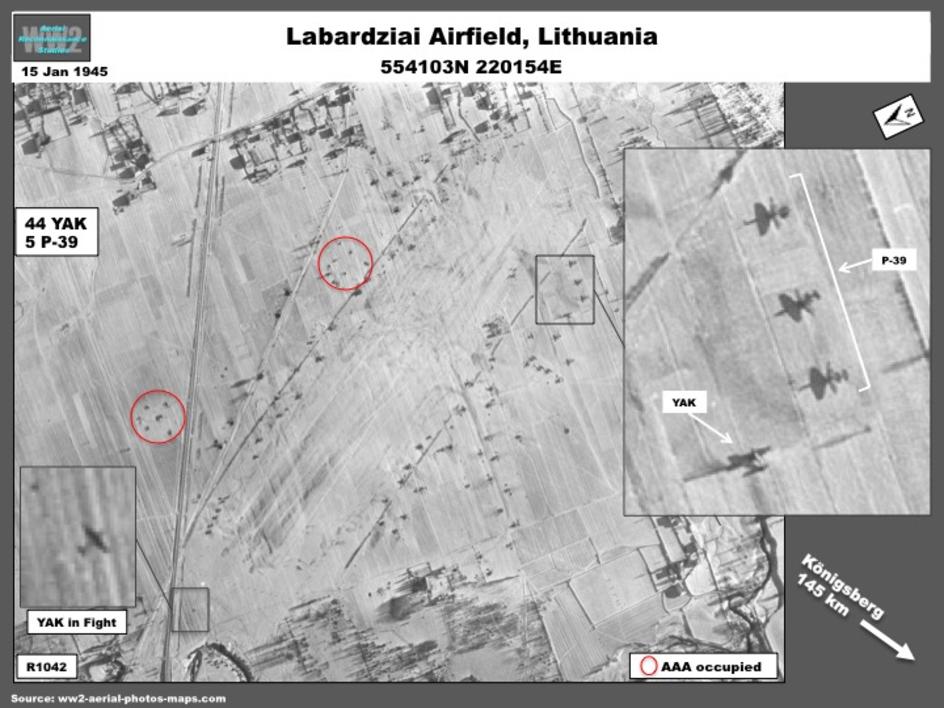 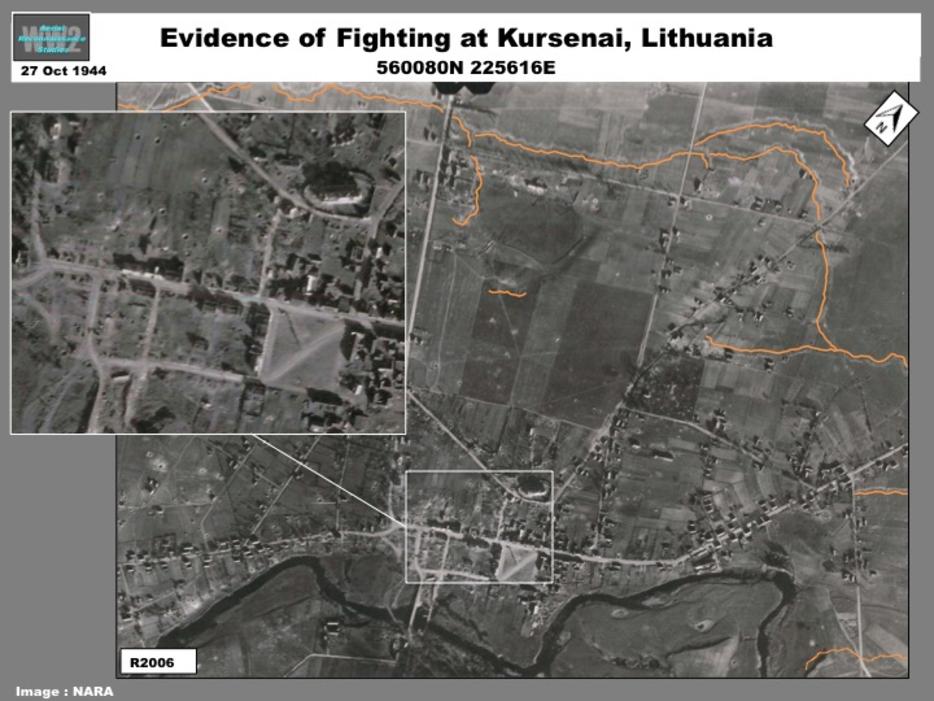 A very large number of aircraft at Saukenai Airfield (Graphic 7, below) on 23 December is evidence of the size of the Soviet buildup prior to entering East Prussia.  The 84 P-39 Aircobra --two regiments-- was one of the largest groups of aircraft observed at any of the Lithuanian airfields. 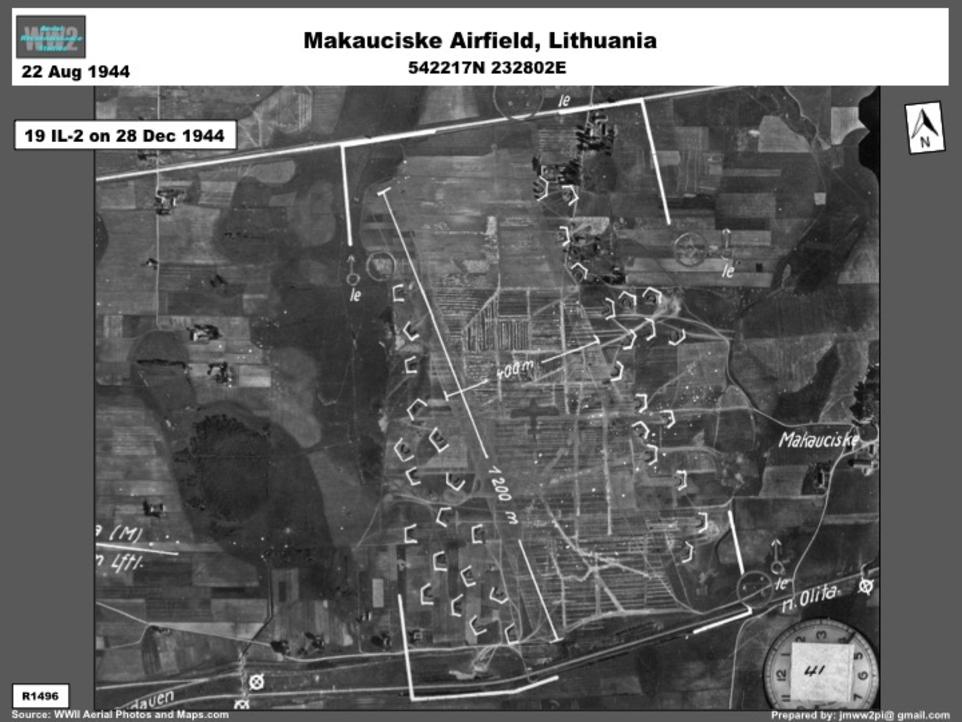 New Information  Red Army vehicle convoys were seen on the highway south of Siauliai and passing through the village of Seda,165 km to the northwest (Map, Graphic 17; some of the vehicles at Seda were towing possible artillery pieces. Seda was not damaged, but evidence of fighting could the villages Kurseniai and Vieksniai --both river crossing sites (Graphics 18 & 19).  A new cemetery had been constructed outside Vieksniai.

The Soviets used available landing areas, such as the pastureland near Mikantonys (Graphic 1) where 60 unidentified aricraft were deployed on 27 July.  However, according to German photo interpreters, most of the airfields consisted of 'rolled grass' runways with little or no other preparation (Graphics 2 & 3).  Dispersal areas and revetments were added to those fields that saw major use (Graphics  4 and 5).  The following graphics illustrate stages of airfield construction and use during the East Prussian campaign phases between July 1944 and January 1945. 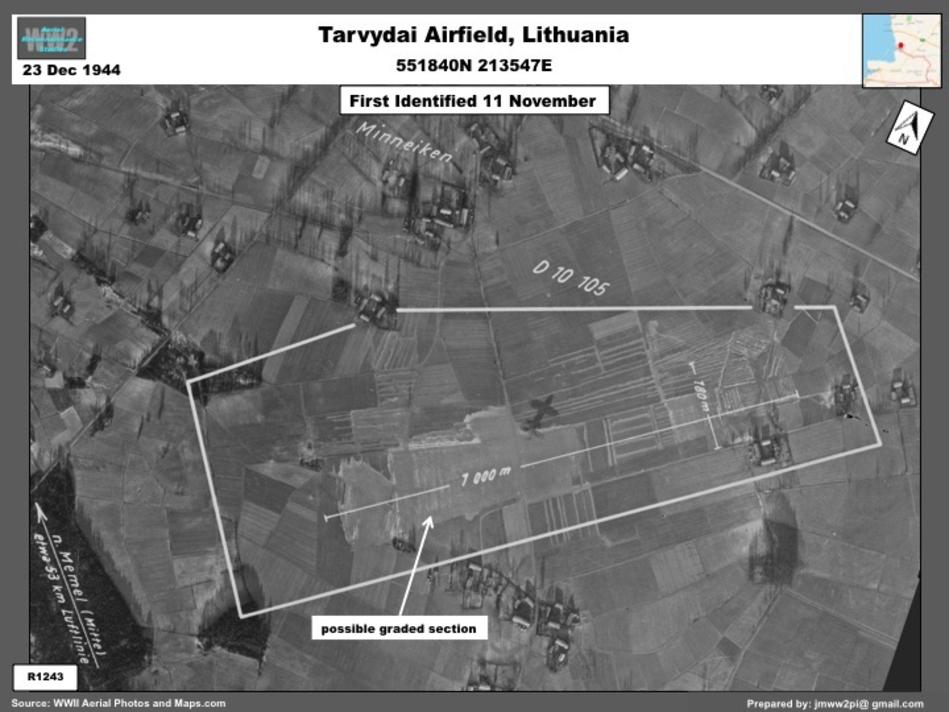 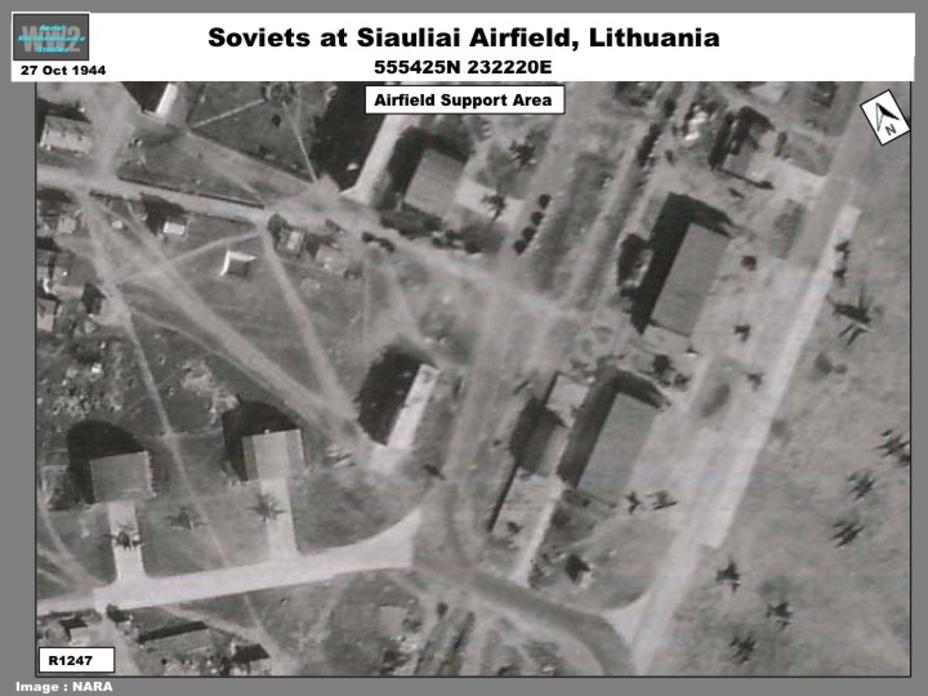 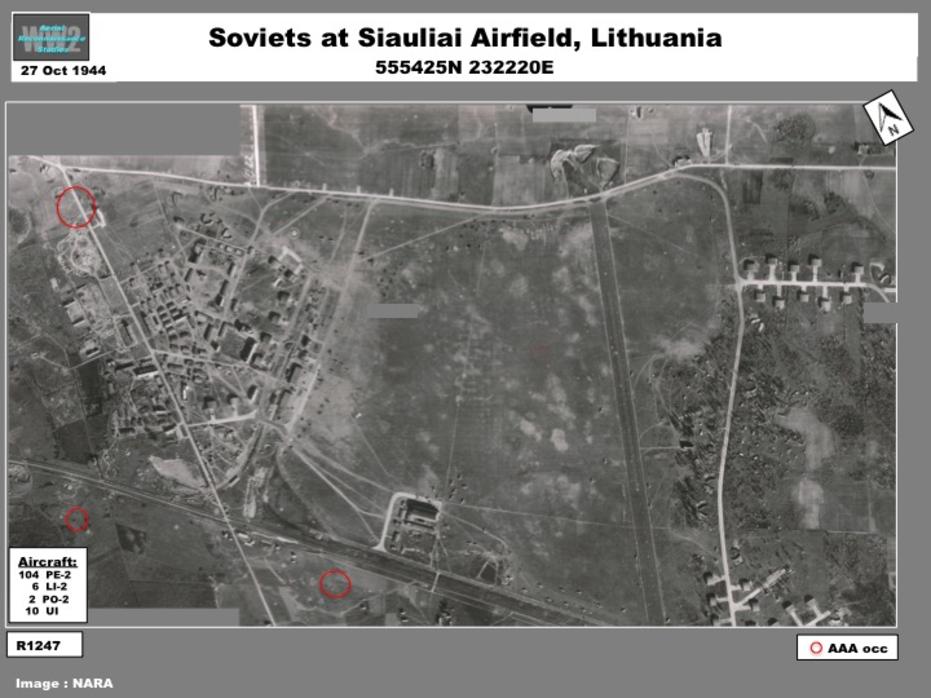 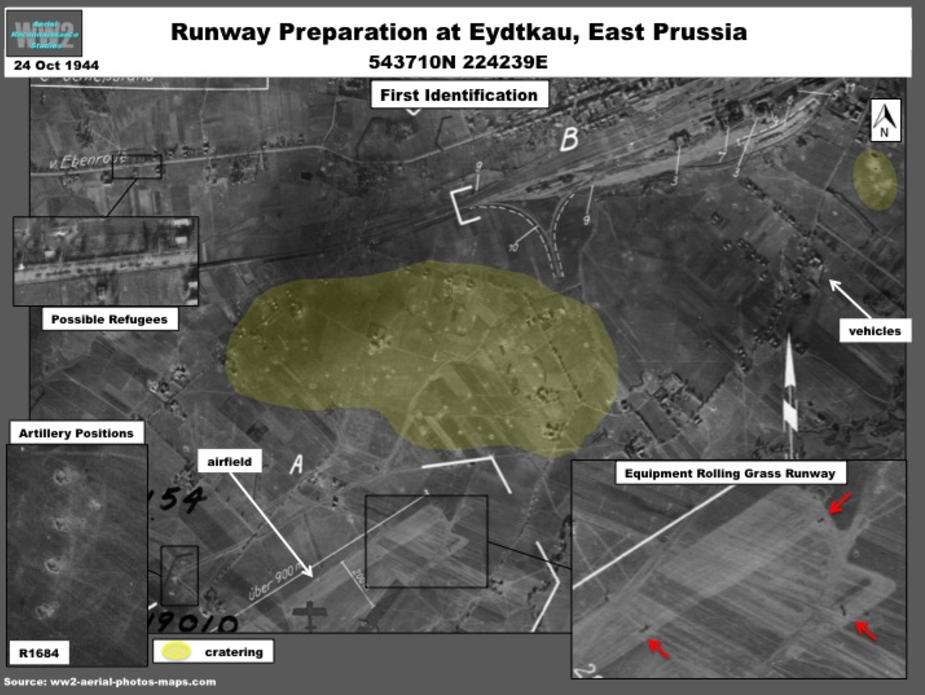 A YAK-equipped fighter regiment with a complement of five P-39's was deployed at Labardziai (Graphic 10) on 15 January 1945, shortly after the final offensive began.  A YAK was landing at the engine access panels were open on all of the P-39's. 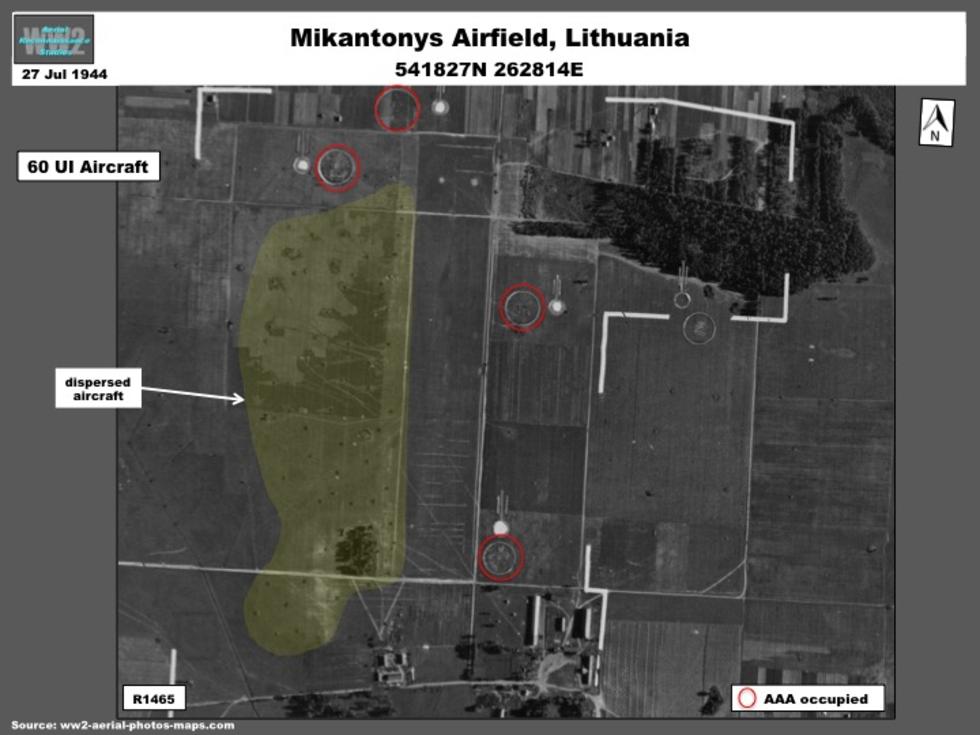 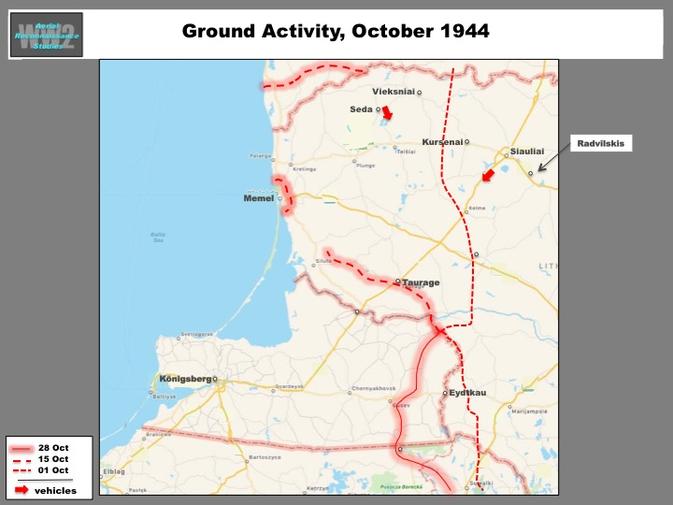 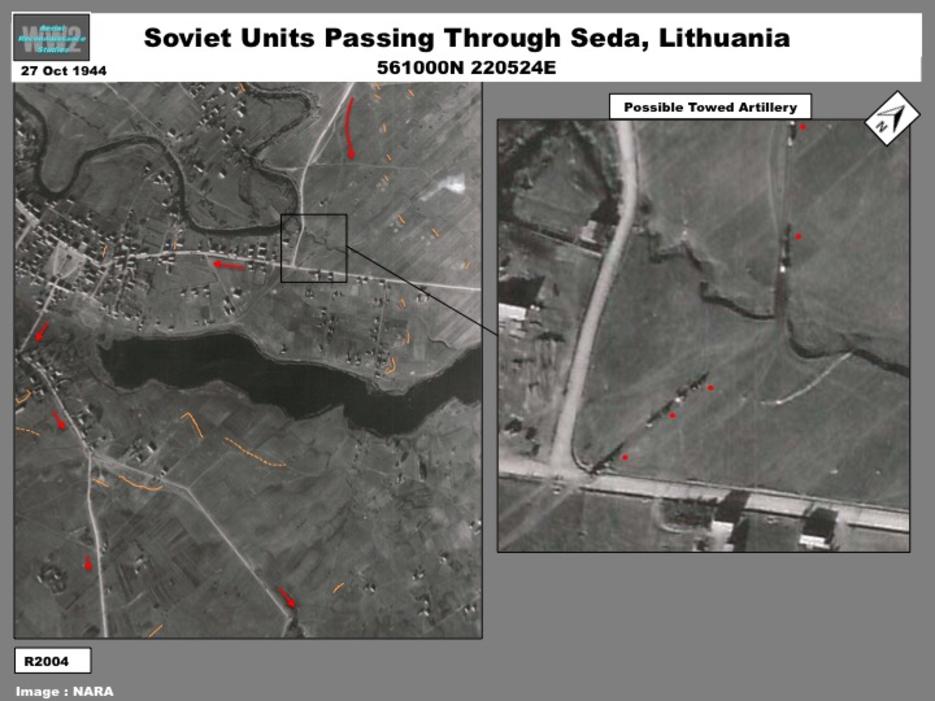 The boundary of East Prussia was breached by late August 1944, at the end of Operation Bagration.  On 24 October, a new runway was being prepared near the border town of Eydtkau and rolling of the runway was in progress.  Cratering and artillery positions from earlier fighting could be seen in the vicinity.  A group of possible refugees was on a nearby road.

Except for the devastated cities and towns left behind, there was comparativley little evidence of activity by Soviet ground forces.  However, fighting could be seen in and around Vilnius in early July.  Red Army logistic activity was identified in several areas in October and December. 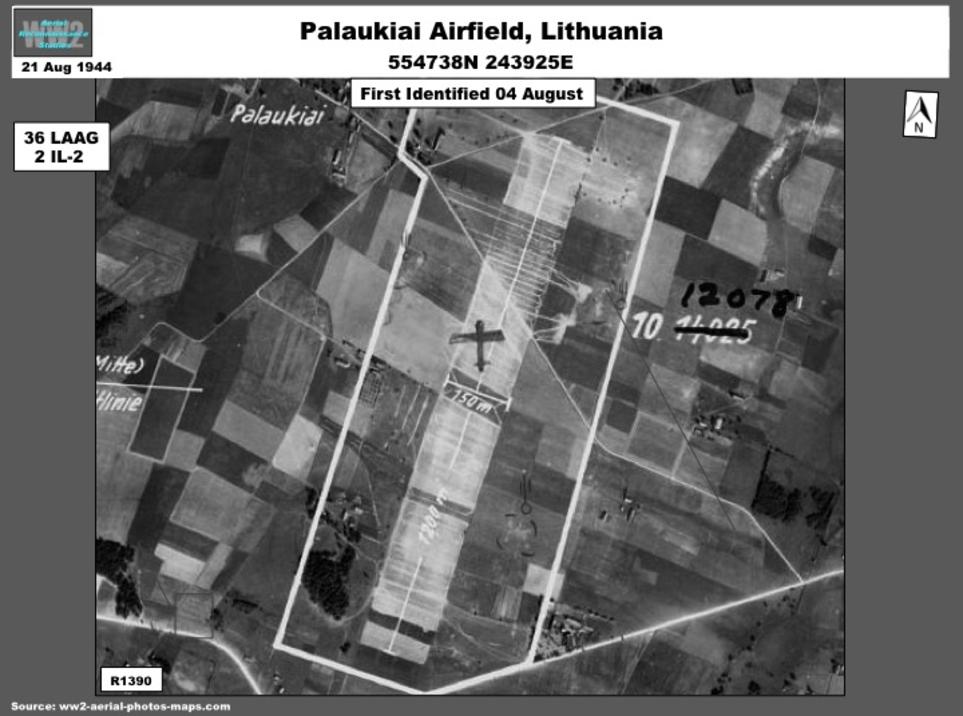 Operation Bagration brought the Red Army to the border of East Prussia by the end of August 1944, setting the stage for offensives in October and January 1945 that culminated in the fall of Königsberg and Memel.  Although available Luftwaffe reconnaissance showed some ground actvivity, the scope of Soviet operations was best illustrated by new airfield construction between July and December 1944.  As a matter of practice, new airfields always closely accompanied the Red Army as it advanced and this was true in the Baltics and Northern Poland.  The largest concentration of these fields was in Lithuania, where available imagery indicates the Luftwaffe was monitoring at least 70 airfields, about 65 of which were probably constructed by the Soviets. The map below shows the approximate locations of Soviet airfields by date of coverage, highlighting those identified for the first time or under construction.  Some, but not all,  of the existing German airfields were also in use. 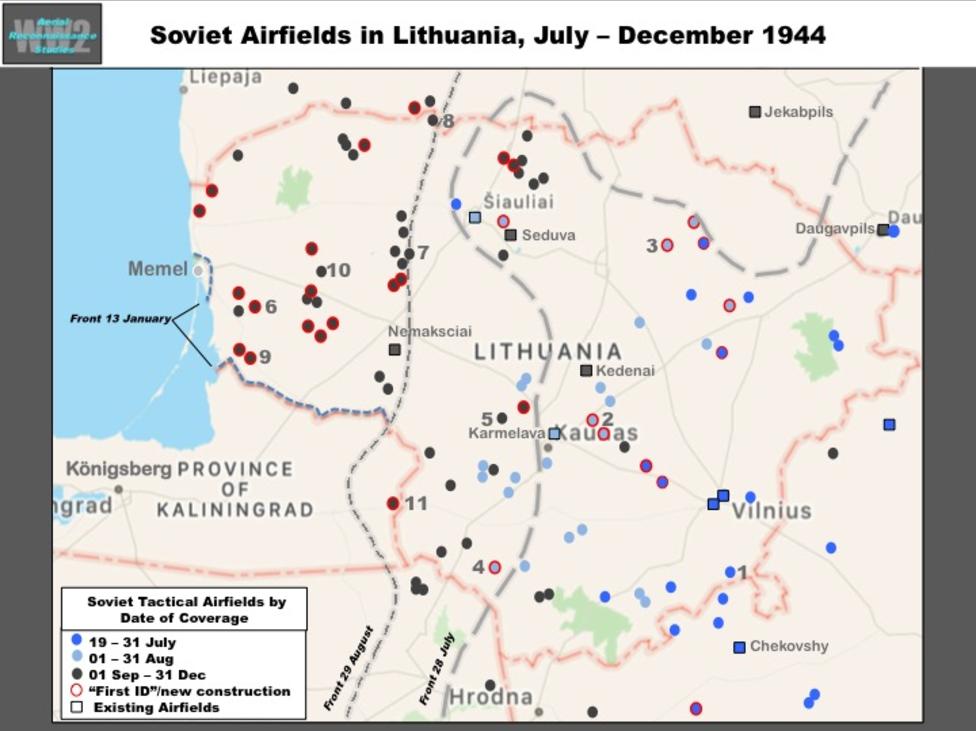 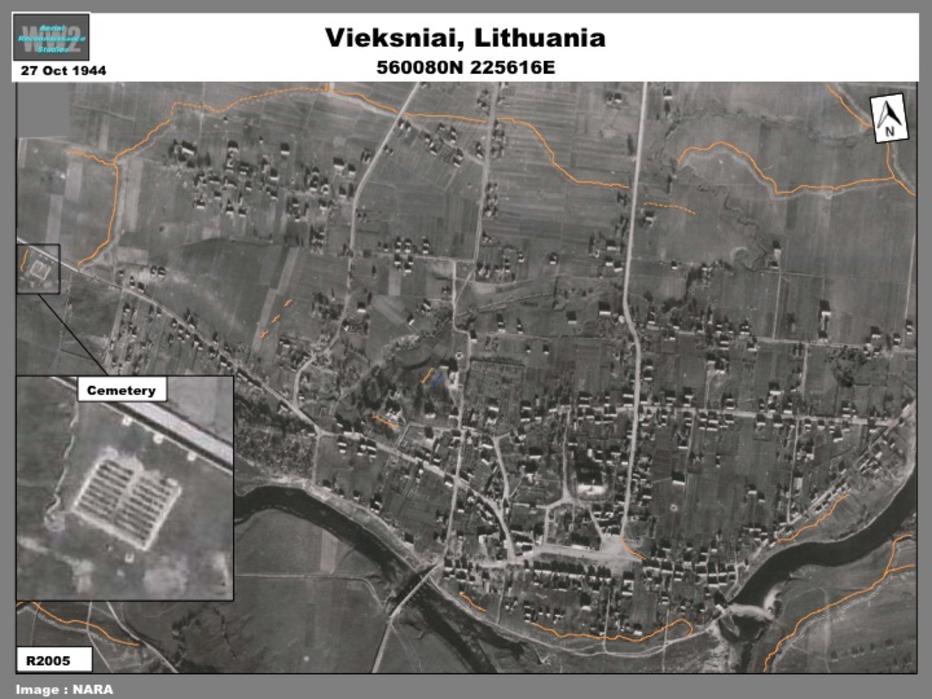 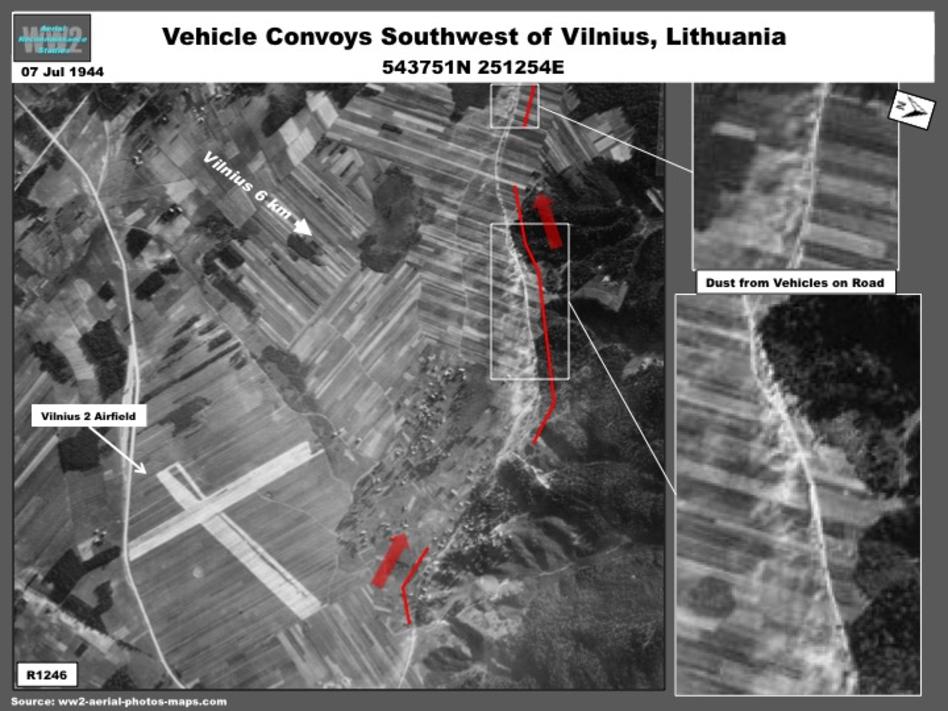 On 23 December Soviet logistical activity in preparation for the East Prussian Offensive was observed at railyards in the vicinity of Siauliai, which had been taken at the end of Operation Bagration.  At least five locomotives were active at Siauliai and the rail yard was full of rolling stock --including equipment or other materiel on flatcars (Graphics 19 & 20).  The yards were defended by five  occupied anti-aircraft sites (four shown).  At least other nine locomotives were active at the Radviliskis rail yards 17km to the southeast (Graphic 21).

Tarvydai Airfield (Graphic 9), another early Memelland/East Prussian target (D 10 105), was identified on 11 November, but remained unoccupied on 23 December.  A possible graded area at the southwest end indicates that the runway required additional preparation.