​​​After the success of ISKRA, the Germans began a staged withdrawal South, to a prepared defensive line around Novgorod.  The first part of this plan was to establish an interim defensive line along the Chudovo-Leningrad rail line, "The Rollbahn," a key German logistic route. Probable German transshipment activity can be seen at Babino, between Tosno and Chudovo (Graphic 9).  The Red Army retook Chudovo at the end of January 1944. 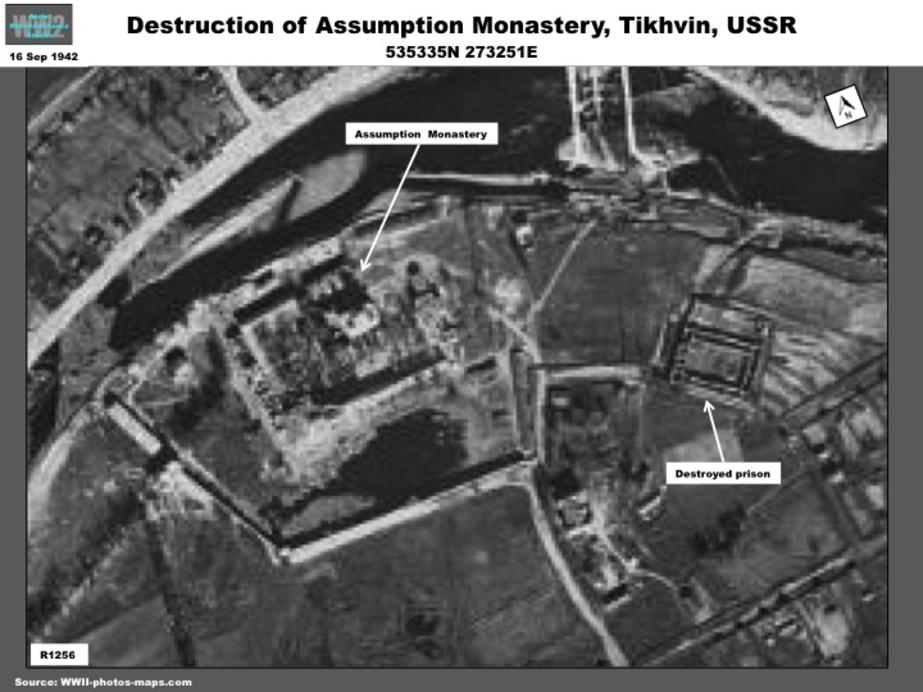 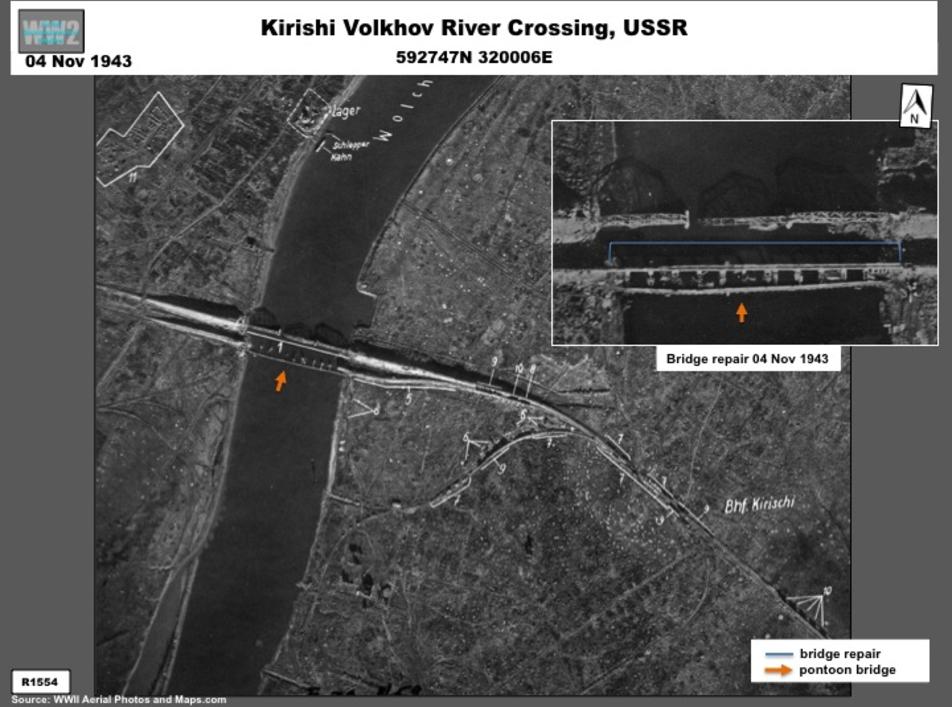 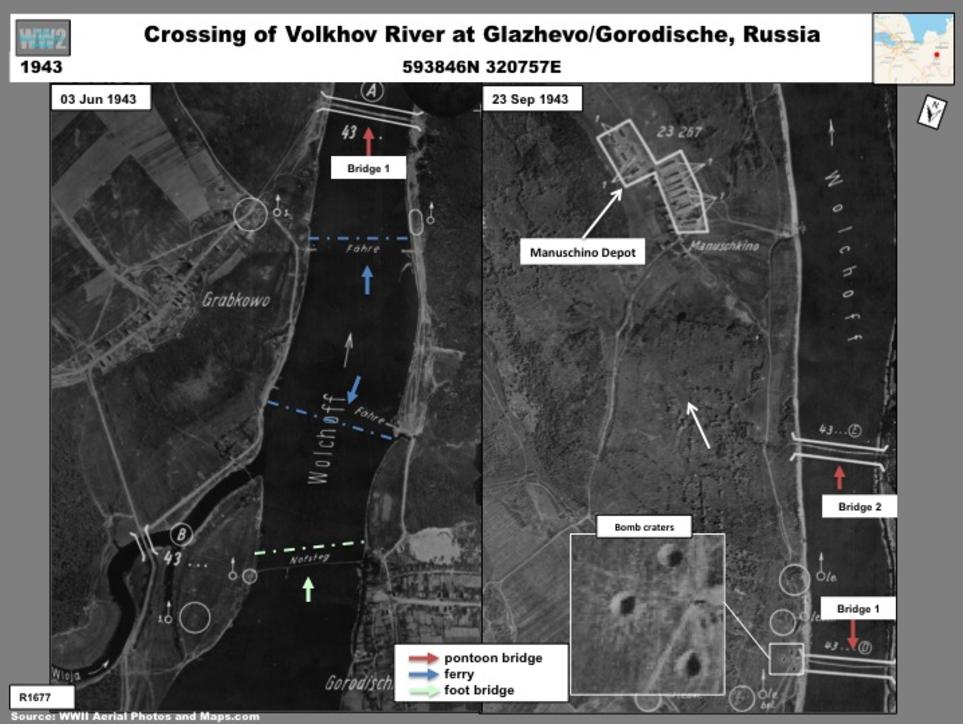 By early June 1943 the Red Army had established additional crossing sites near the towns of Glazhevo-Gorodische (Graphic 6).  On 23 September, three bomb craters, the result of recent Luftwaffe bombing, could be seen at the western approach to one pontoon bridge. A storage depot was located nearby. 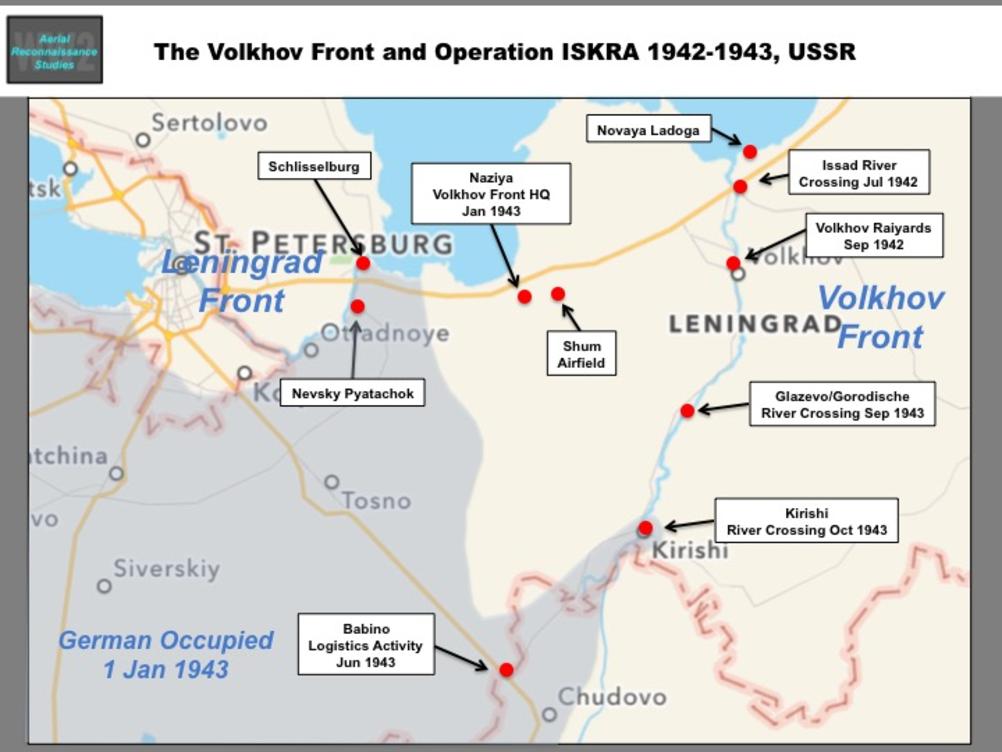 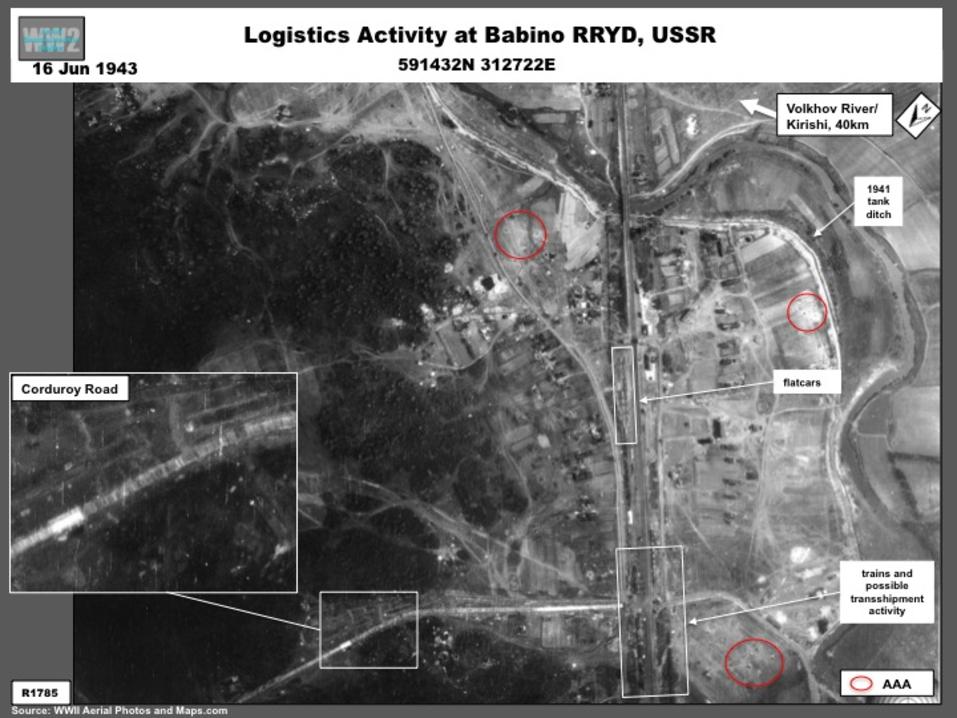 The railroad hub at Tikhvin (Graphic 12), 70 km southeast of Volkhov City, was briefly occupied by the Germans between 8 November and 9 December 1941.  After it was retaken, Tikhvin became a vital supply point for 'The Road of Life.' Improvements to the rail network around Tikhvin continued on 2 August 1943 (Graphic 13), when a new rail segment directly connecting the East-West and Southwest from Tikhvin was identified by German reconnaissance.  Tikhvin itself suffered significant damage during its occupation; among the sites damaged was the Assumption Monastery and a nearby prison Graphic 14). 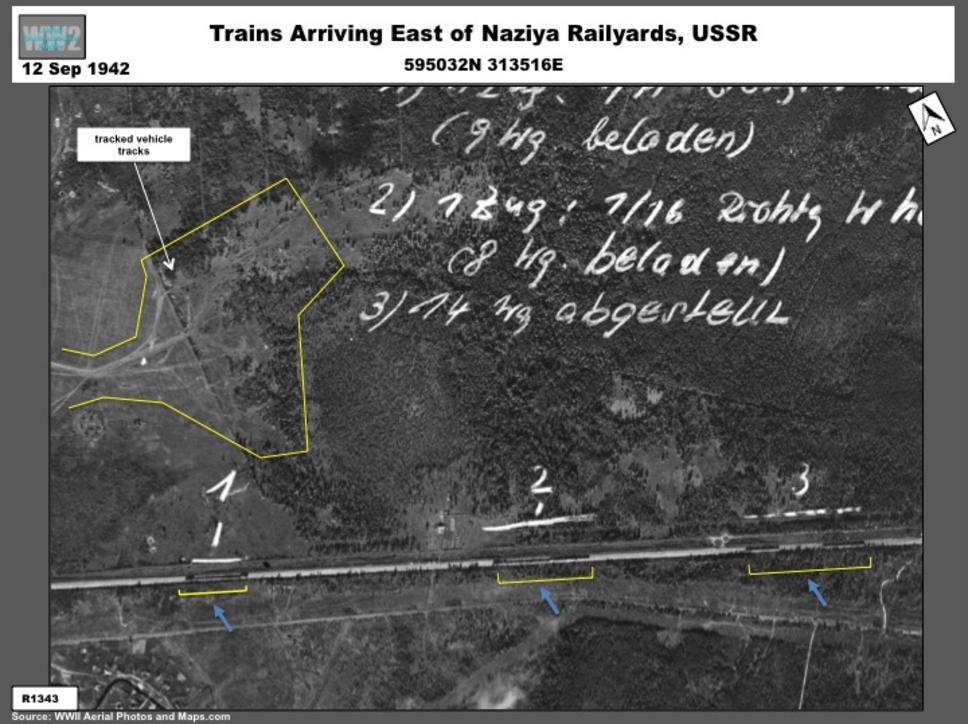 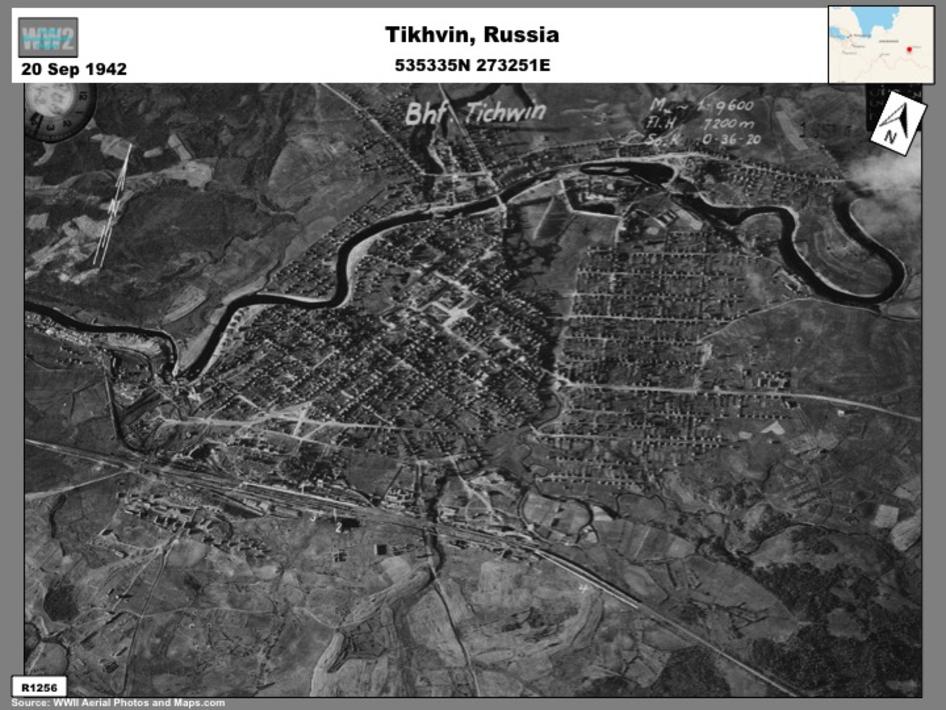 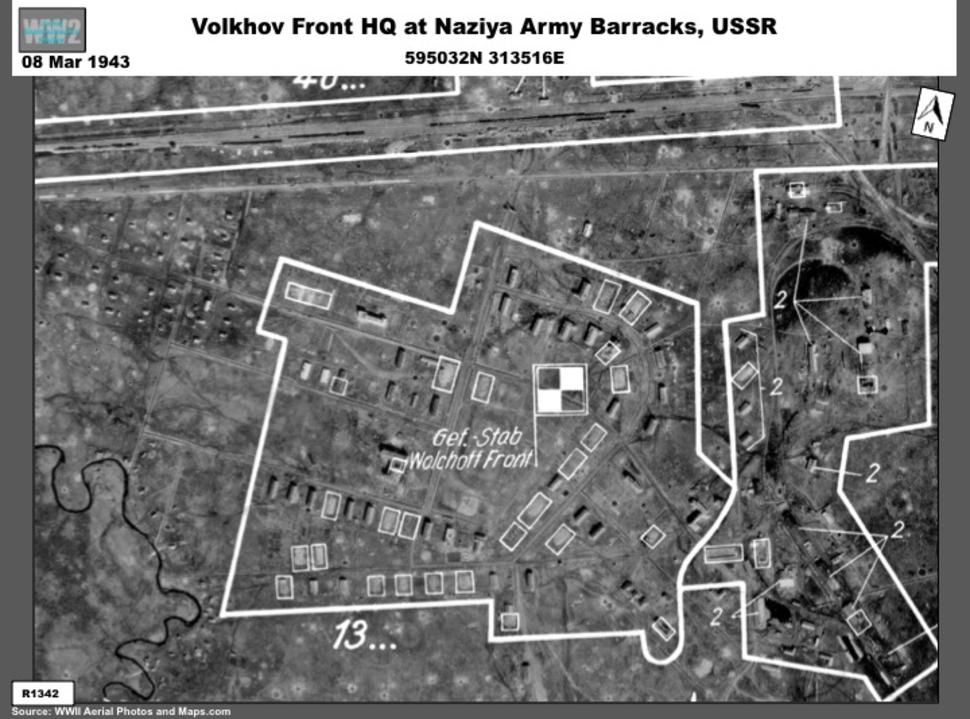 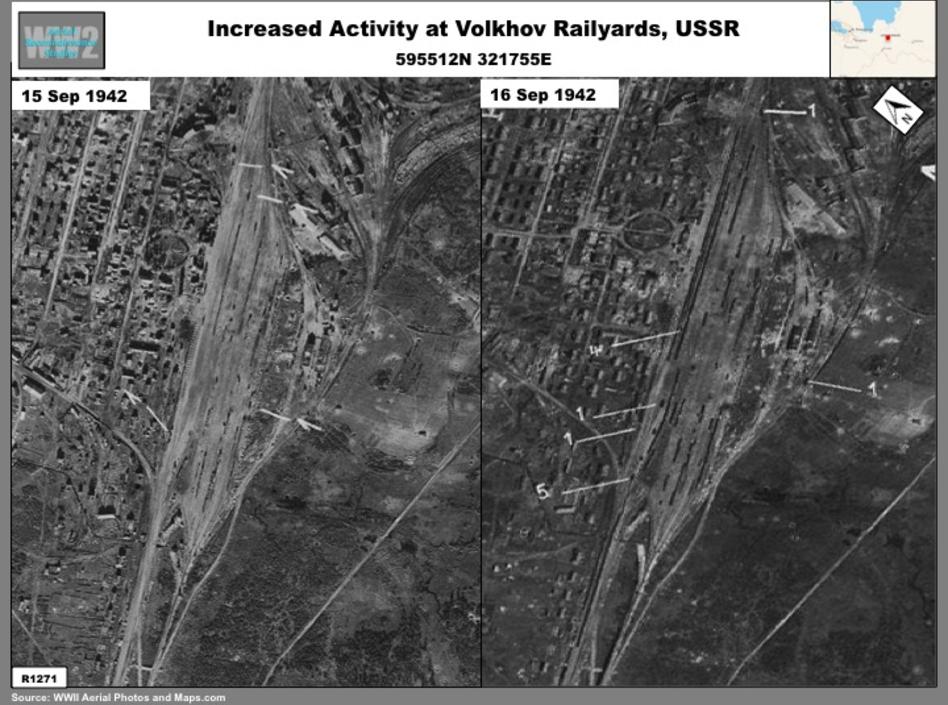 On the first of October 1943, the Germans withdrew from Kirishi their last remaining position on the east bank of the Volkhov.  By 27 October, the Soviets had constructed a pontoon bridge alongside the destroyed rail bridge (Graphic 10) and by early November the rail bridge was under repair (Graphic 11) 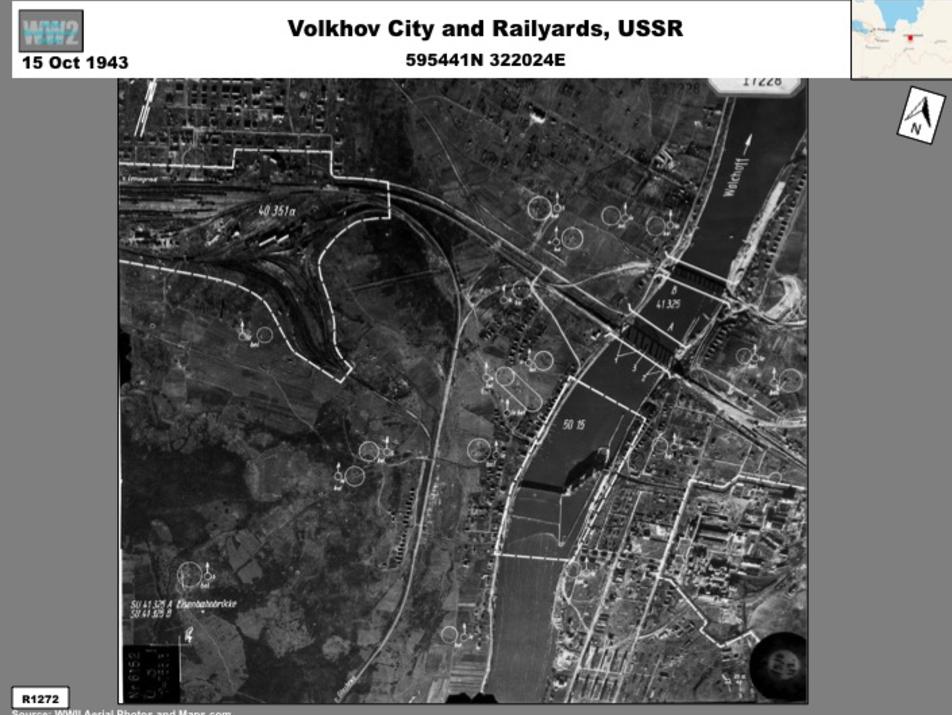 Between 12 and 30 January 1943 the Volkhov and Leningrad Fronts launched Operation ISKRA which opened a corridor through Schliesselburg to end the Siege of Leningrad. In January 1944, the Leningrad-Novgorod Offensive cleared areas to the South and West, further relieving the Siege by taking the Moscow-Chudovo-Tosno-Leningrad railway. 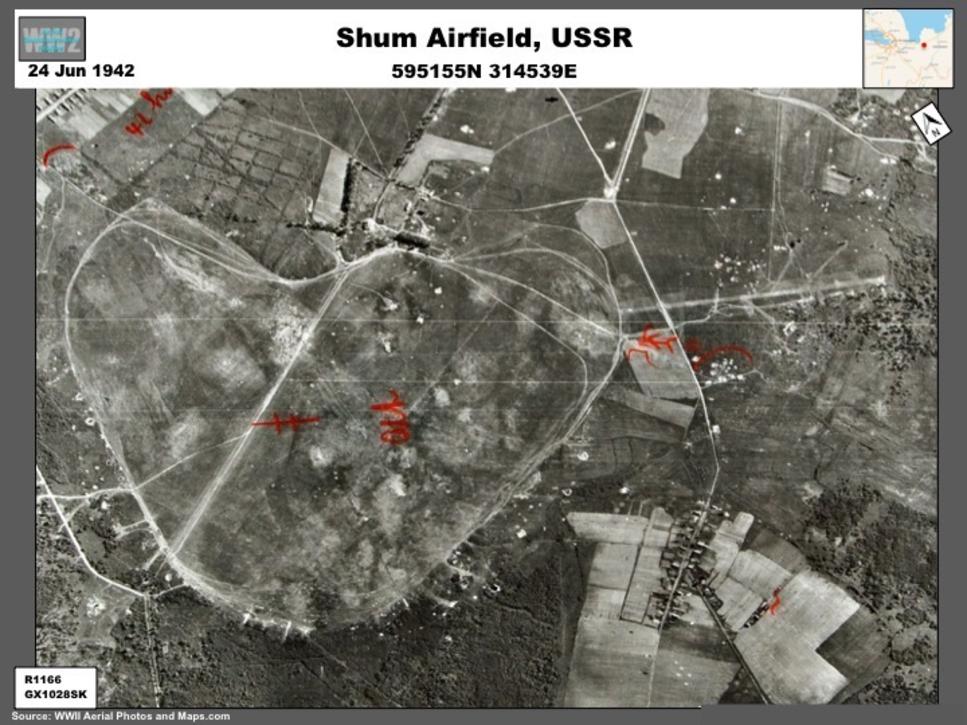 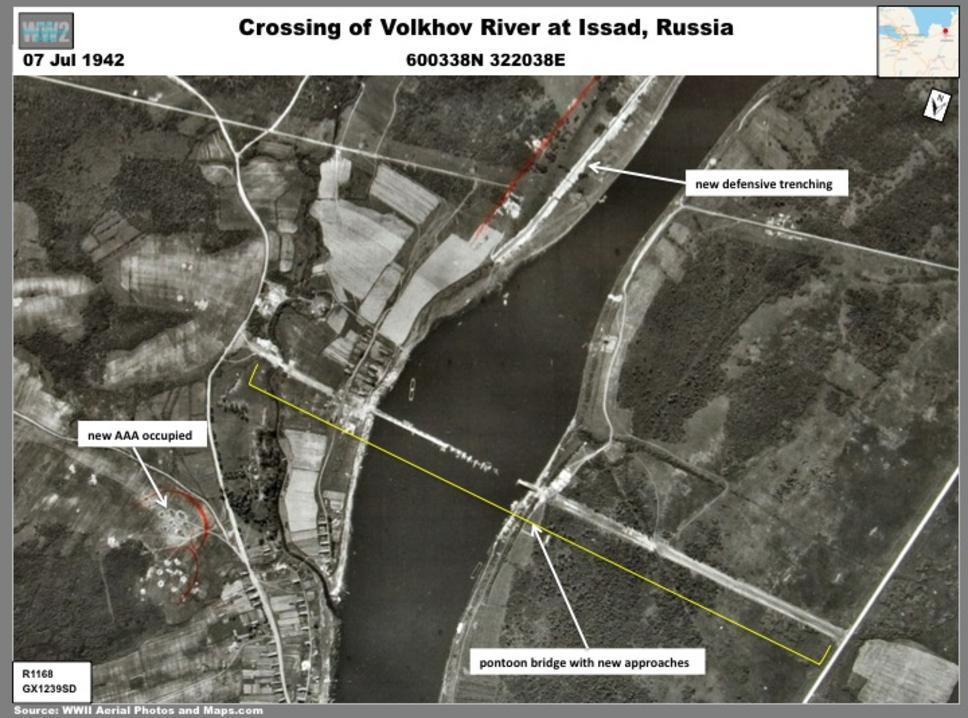 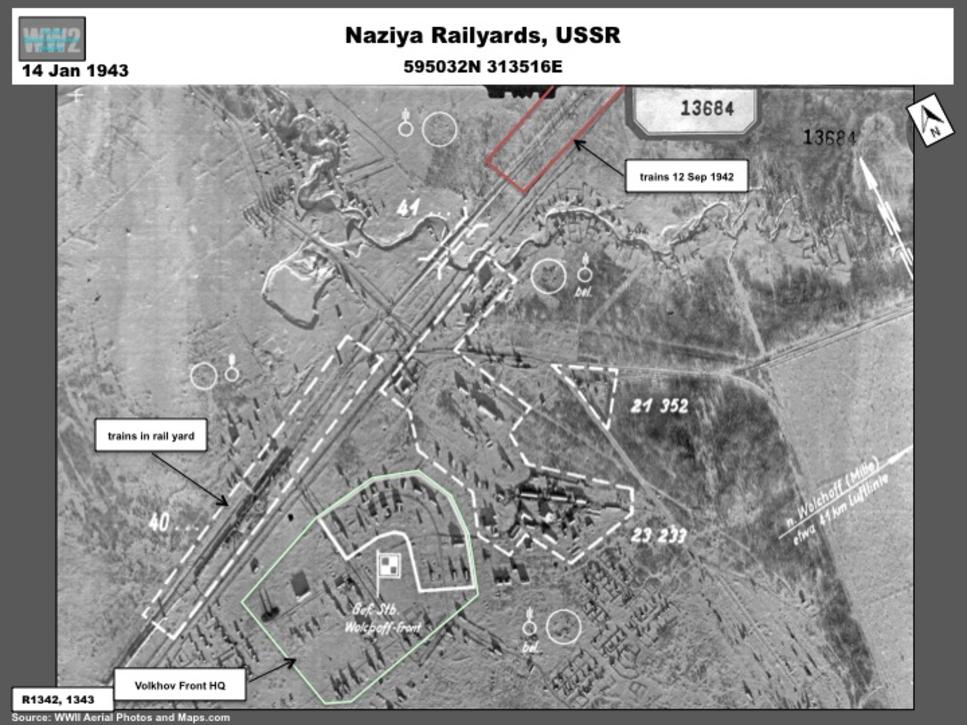 A the town of Volkhov an increase in rollingstock took place between 15 and 16 September  (Graphic 7), where rail bridges across the river remained intact (Graphic 8) 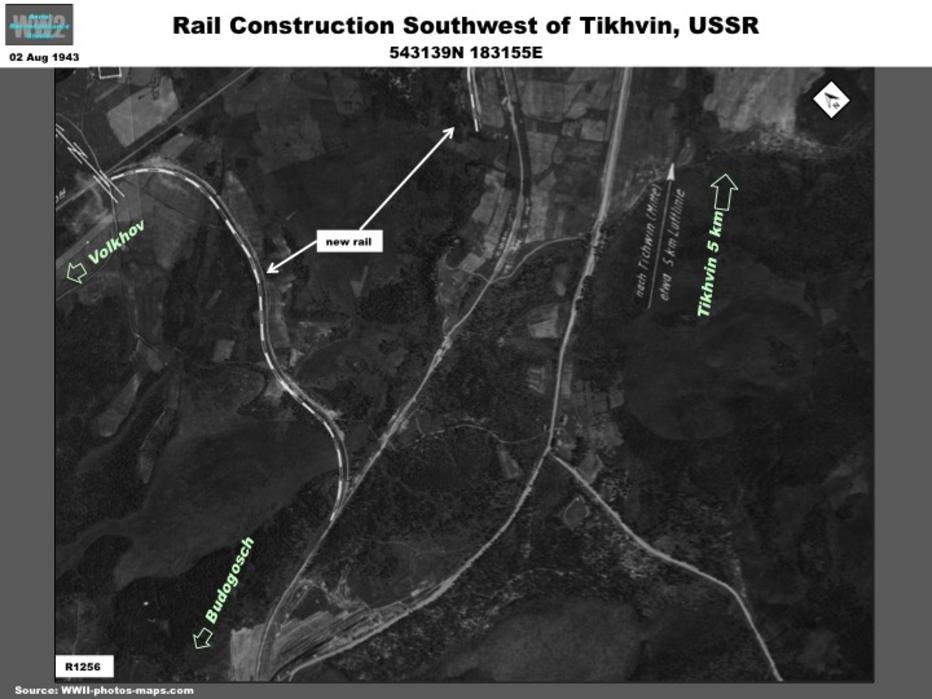 Logistical preparations for ISKRA were apparent as ealrly as July 1942 when a new pontoon bridge had been installed across the Soviet-controlled part of the Volkhov at Issad. (Graphic 1)  In September 1942 military trains loaded with equipment were off-loading east of

​Naziya (Graphic 2). Heavy vehicle trackage nearby --including some by armored vehicles-- indicated that Naziya was a staging area. Trains were also in the Naziya railyard during Operation ISKRA and --according to German photo annotations-- the the Volkhov Front command post was deployed nearby (Graphic 3). The command post was still deployed there in March (Graphic 4).  The command post was served by the airfield at nearby Shum. (Graphic 5)