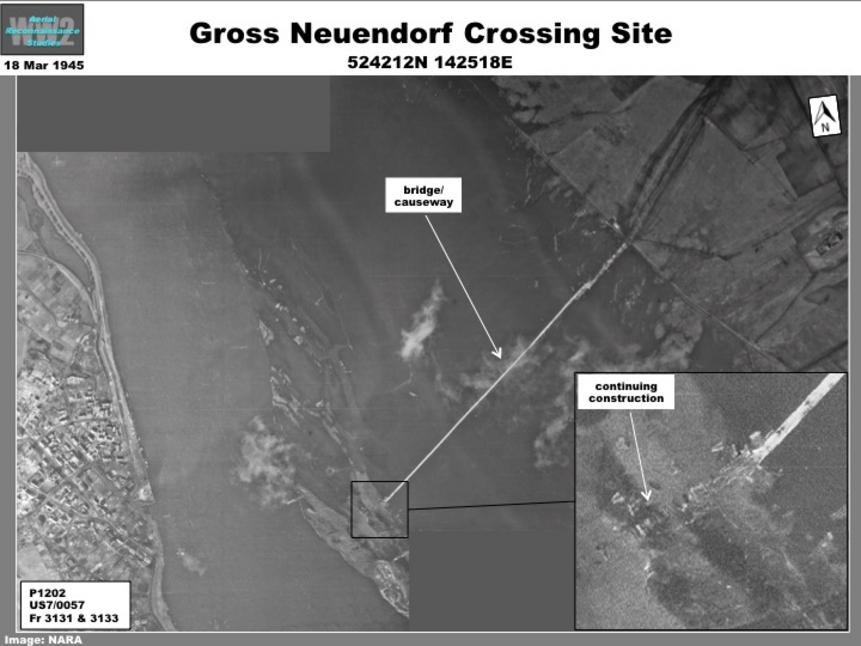 The Siege of Küstrin (Kostrzyn) between 31 January and 30 March 1945 opened the way for the Red Army's assault on Berlin.  By 20 February, when the town was imaged by a Luftwaffe reconnaissance sortie, it had already been isolated by enemy bridgeheads to the north and south. The sortie provided good coverage of German defensive preparations and Soviet activity northwest along the Oder, but, likely because of cloud or smoke, the crossings at Kienetz and Gross Neuendorf were apparently not imaged (Map).  The approximately 30 km between Küstrin and the town of Güstebiese (Gozdowice) are depicted in six annotated area mosaics (Areas A - F).  Individual points of interest are shown on a number of graphics (1 - 12), which are noted on the mosaics. 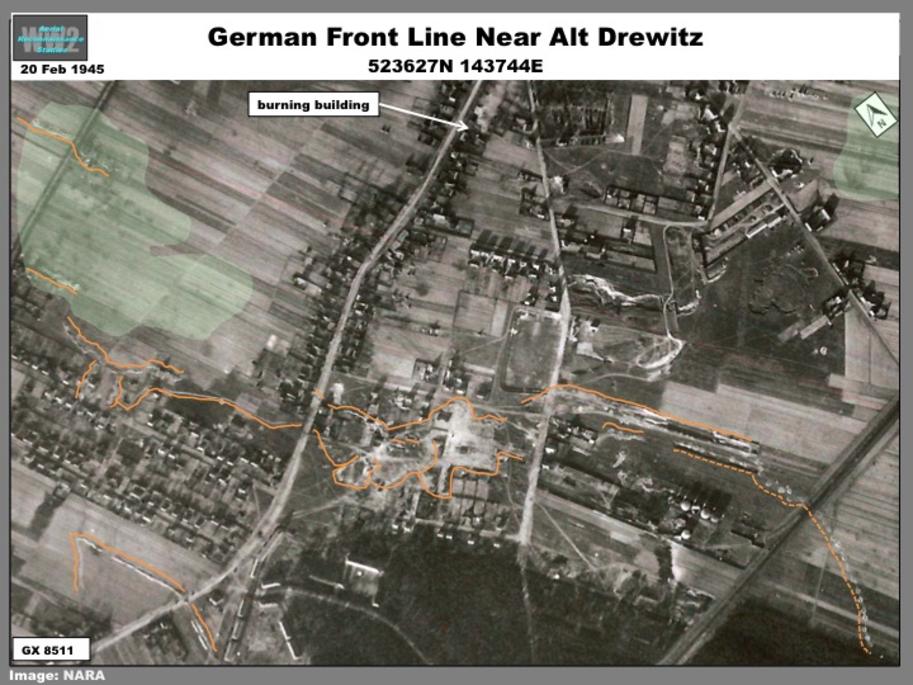 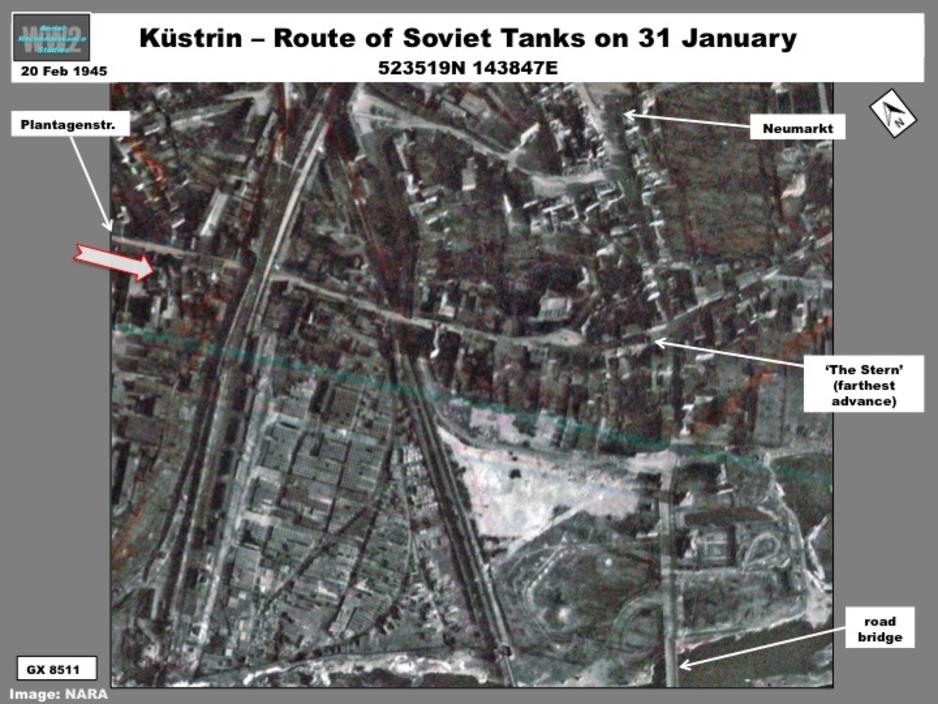 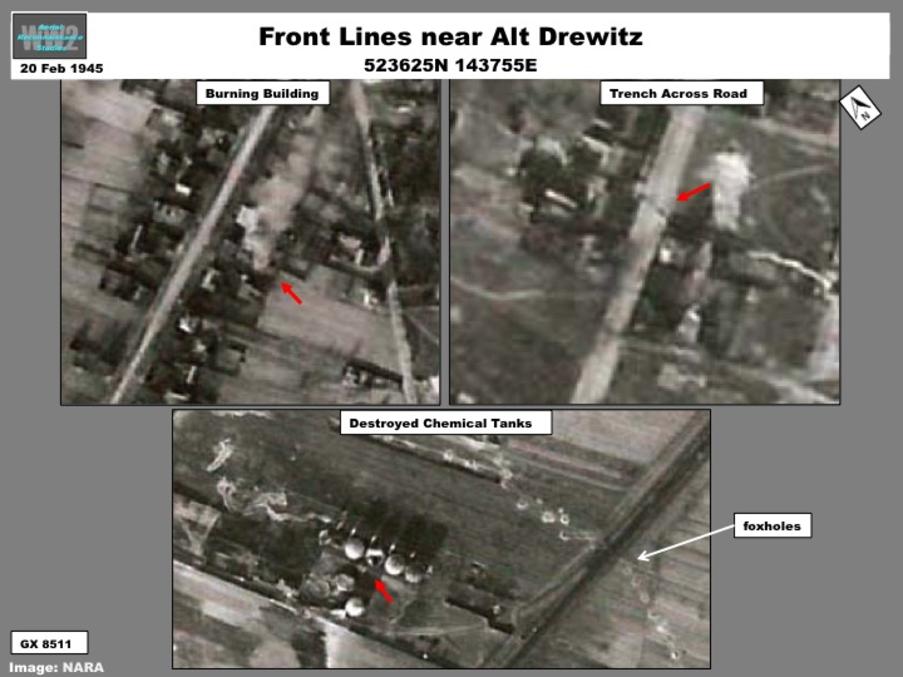 ​​​​On 20 February, trenching and foxholes defined the defensive perimeter around Küstrin, which extended from the town of Blyen on the Oder's left bank, around the cellulose plant, hospital and infantry barracks training area in the Neustadt, and west around the Altstadt to the town of Kietz (Area A, Graphics 1 - 3).  The Neustadt had already been penetrated by the Red Army on 31 January, when an armor company drove unopposed down the Plantagenstrasse. The tanks were stopped at an intersection known as the Stern and four were destroyed after turning around and heading back down the street (Graphic 4).  The image shows several objects in the street, some of which could be the tanks.  ​

From Küstrin, the Red Army controlled the Oder riverbanks all the way tto the right bank town of Güstebiese (Gozdowice).  Evidence of the Soviet presence --weapons positions and vehicle trackage-- could clearly be seen around deployment areas north of Alt Drewitz in the vicinity of Alt Schuamberg (Area B).  It was not clear if all these were all occupied on 20 February, but a convoy of five trucks could be seen, probably traveling to Alt Schaumberg (Graphic 11).  A large area of fresh concentrated artillery imapacts could be seen north of Blyen, where the Wehrmacht had staged counterattacks. Two smaller impact areas near Alt Schaumberg and Alt Drewitz suggested limited response from the Wehrmacht.

Alt Drewitz was also the site of a major POW camp, STALAG III-C (Graphic 12).  The camp (see separate article), was liberated by the Red Army on 31 January; a small sub-camp was kept at the Cellulose Plant (see Graphic 2). 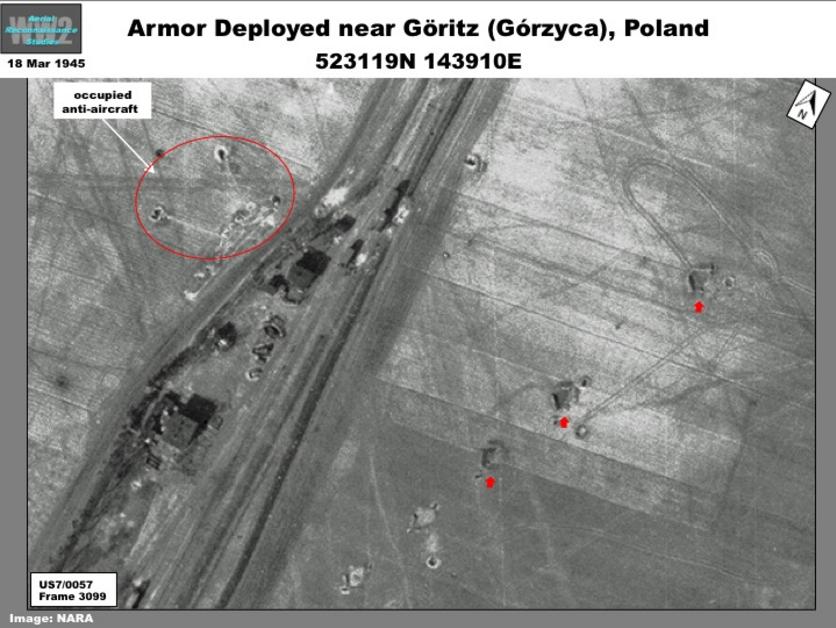 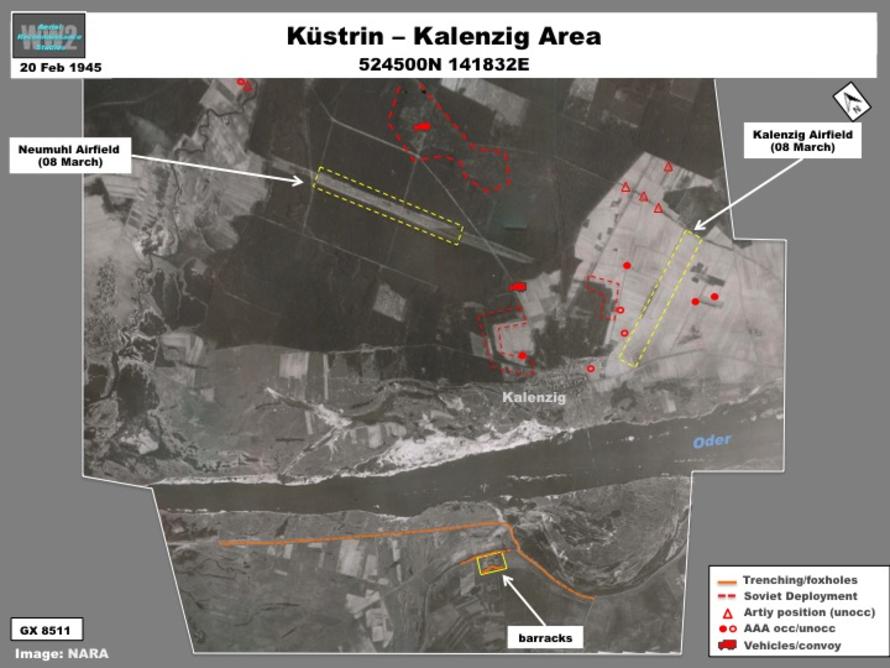 The Soviets would soon establish another crossing point at Zellin (Czelin), but on 20 February, little activity was observed in the town, which showed some evidence of fighting (Area E).  Twelve unoccupied anti-aircraft sites indicated a recent Soviet presence. 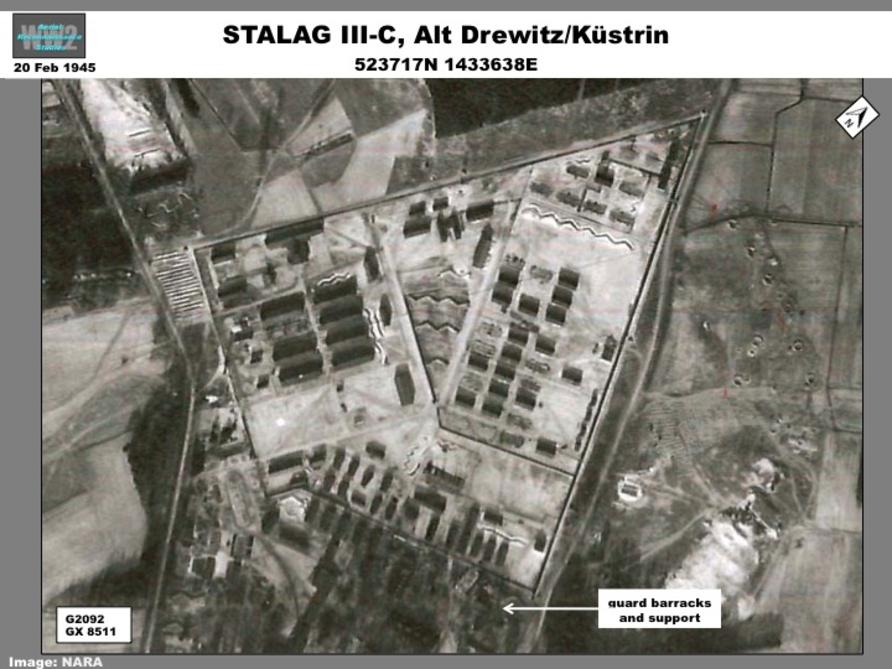 Further northwest, Soviet activity around the town of Kalenzig (Kalensko) was more pronounced (Area C).  Vacant artillery and anti-aircraft artillery (AAA) positions were the result of earlier activity.  However, the presence of four occupied anti-aircraft sites and at least three deployment areas with an undetermined number of vehicles, presaged not only the establishment of another bridgehead, but the construction of two tactical airfields.  A Luftwaffe target graphic showed the airfields, Kalenzig and Neumuhl (see article Vistula-Oder Operation Graphic 6), may have been completed by 8 March. The area ultimately used for Kalenzig Airfield was bracketed by three of the occupied AAA positions.  It appears Neumuhl was an abandoned German hard-surface airfield project. The target graphic showed the Soviets had improved the center section. 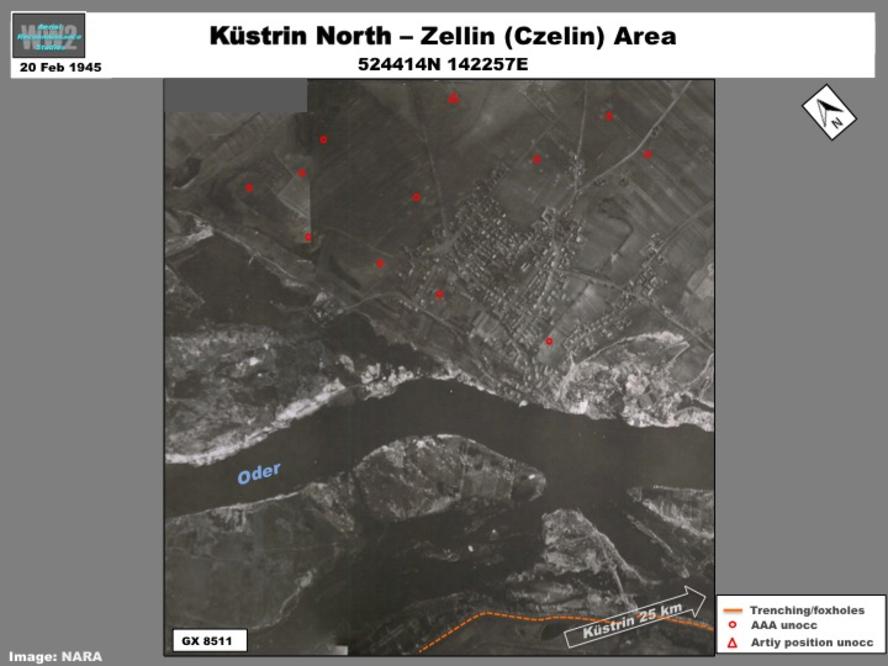 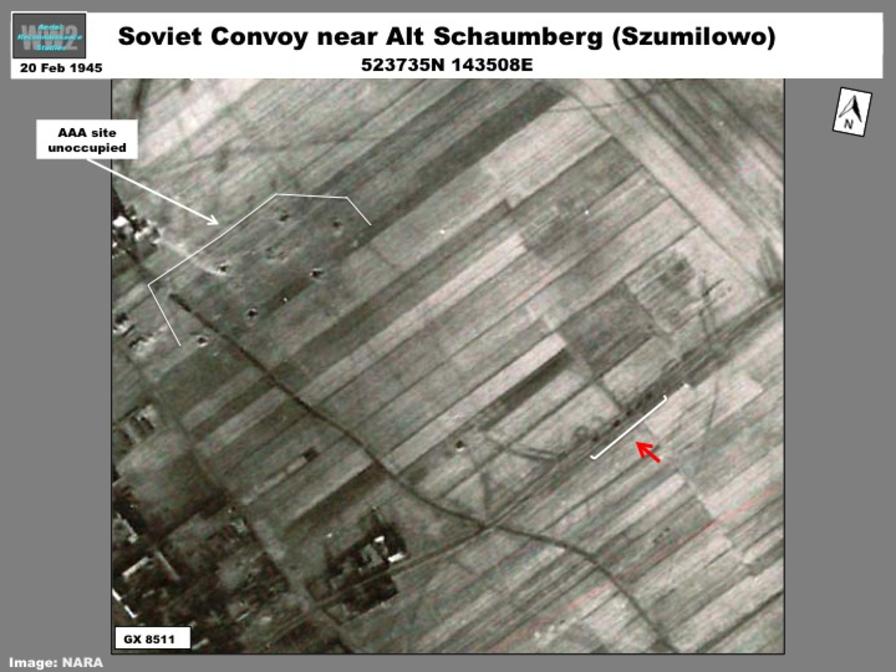 The Siege of Küstrin and the Oder River Front 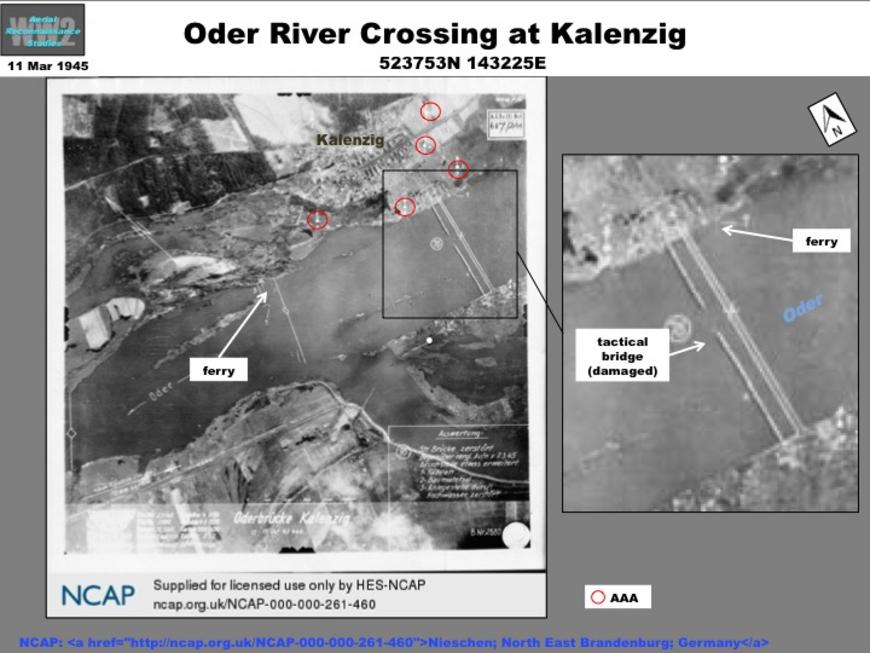 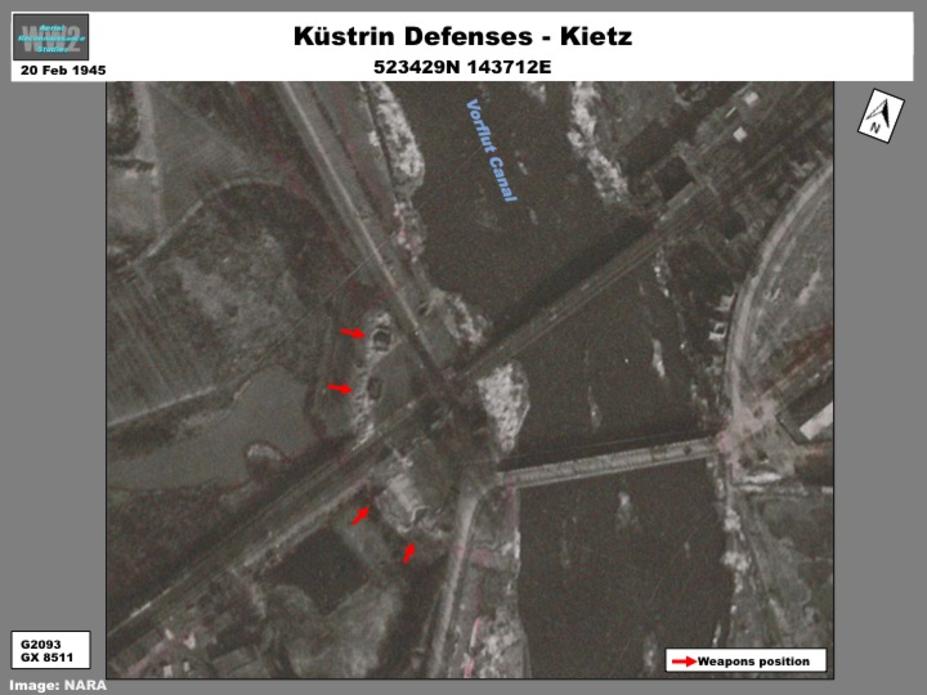 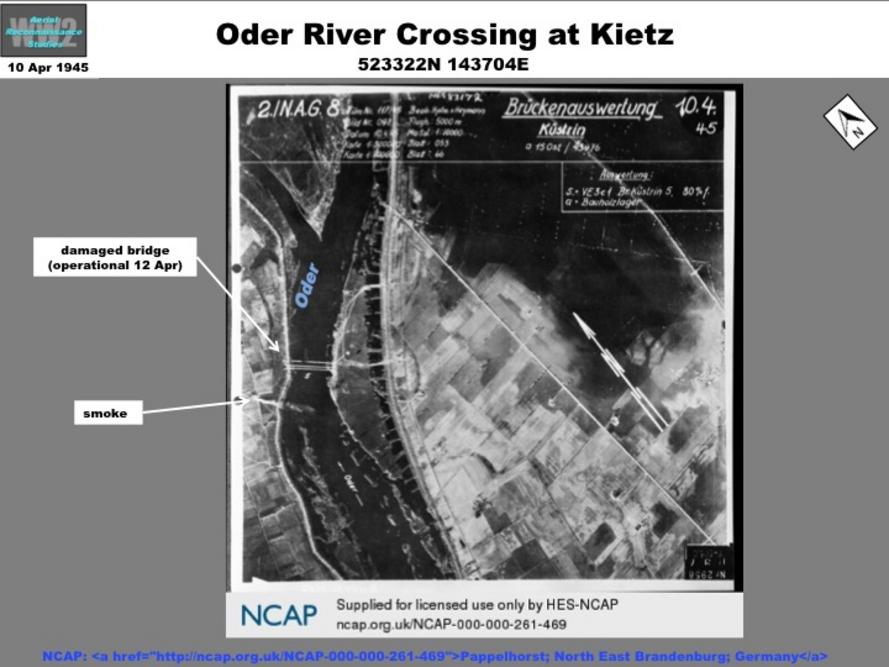 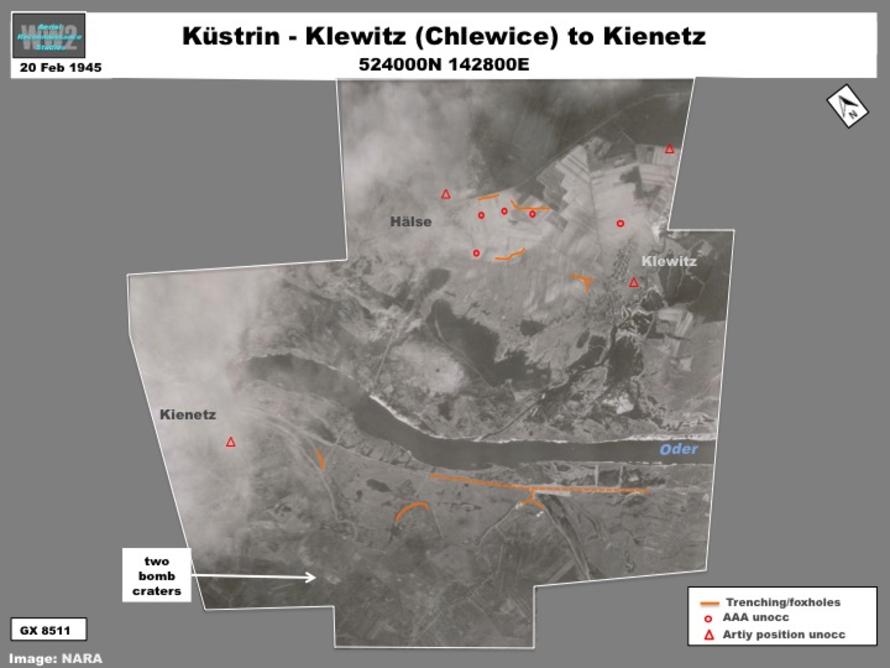 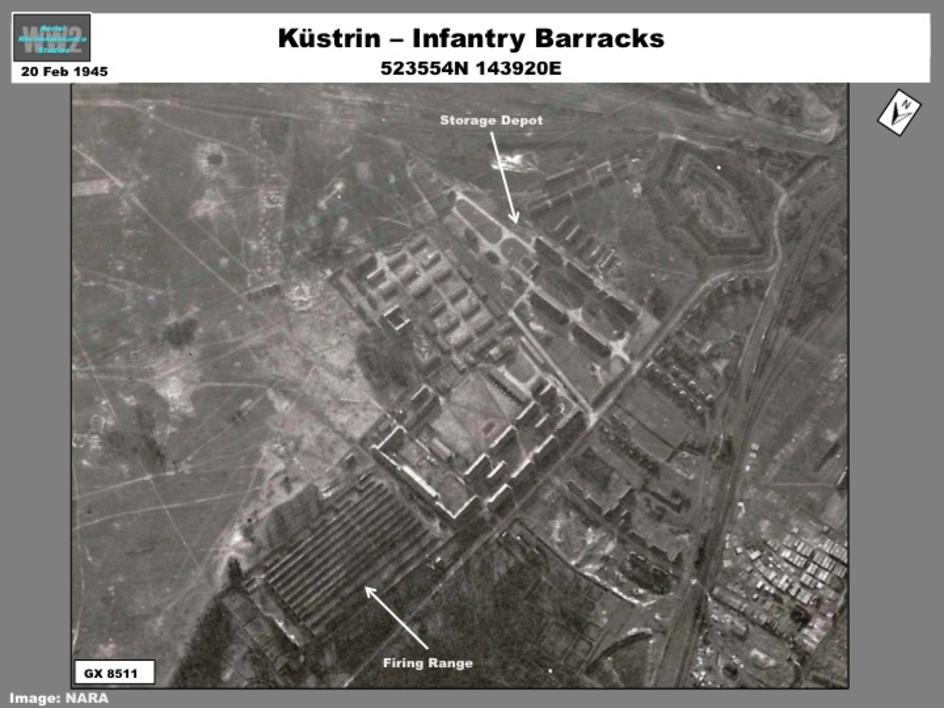 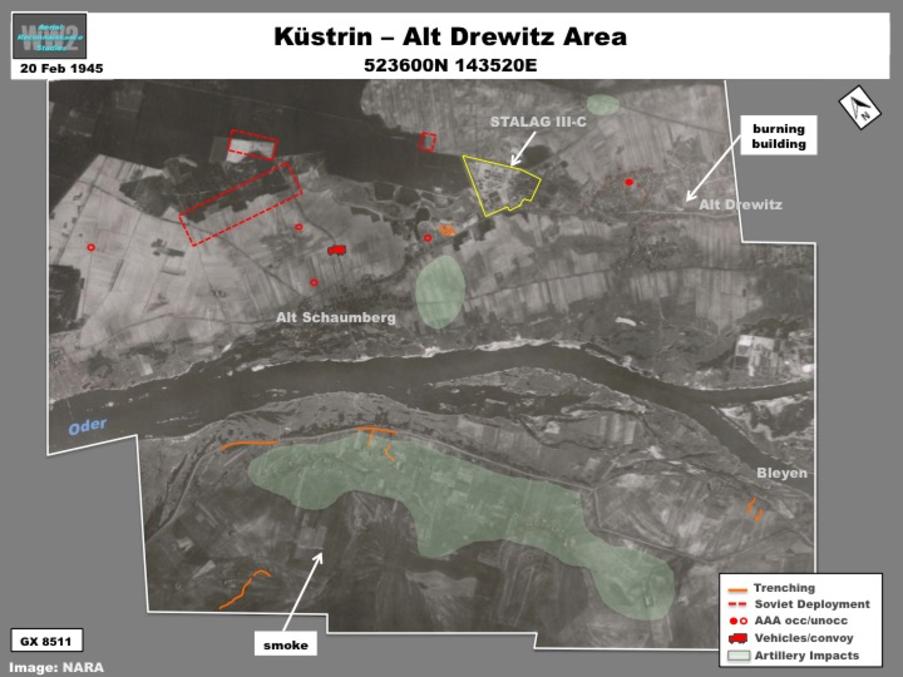 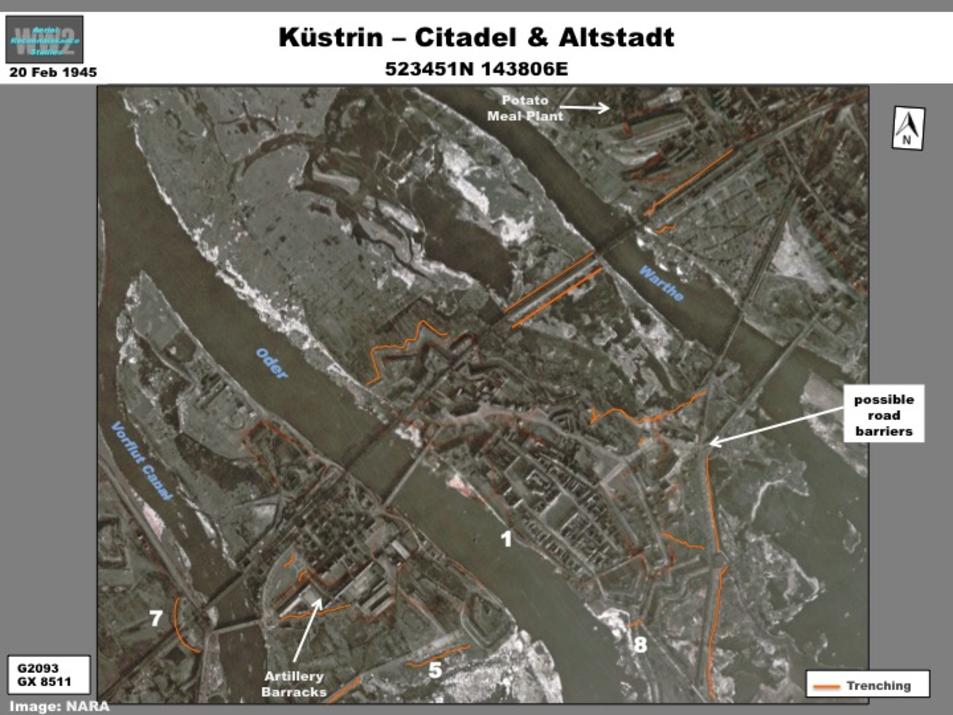 The front line was most evident outside the town of Alt Drewitz where a tank ditch had been excavated across the road, Drewitzer Strasse (Graphics 9 & 10). Trenches and foxholes were on either side of the road.  A building was burning 500m to the northwest along the road. 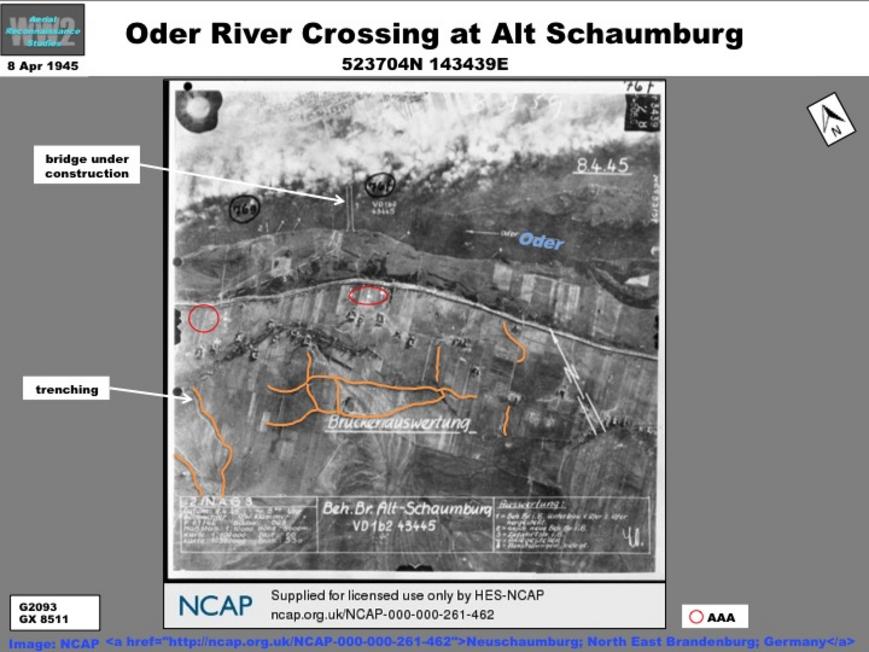 The German defenses included heavy weapons positions, which could be identified at several locations around the town. The positions were sited to cover roads entering the town (Graphics 5 - 8).   A number of vehicles near the artillery barracks may have been marshalled for the town evacuation, which began on 19 February.  A tank ditch had been excavated at the intersection of two roads south of the citadel at the Kietz gate. 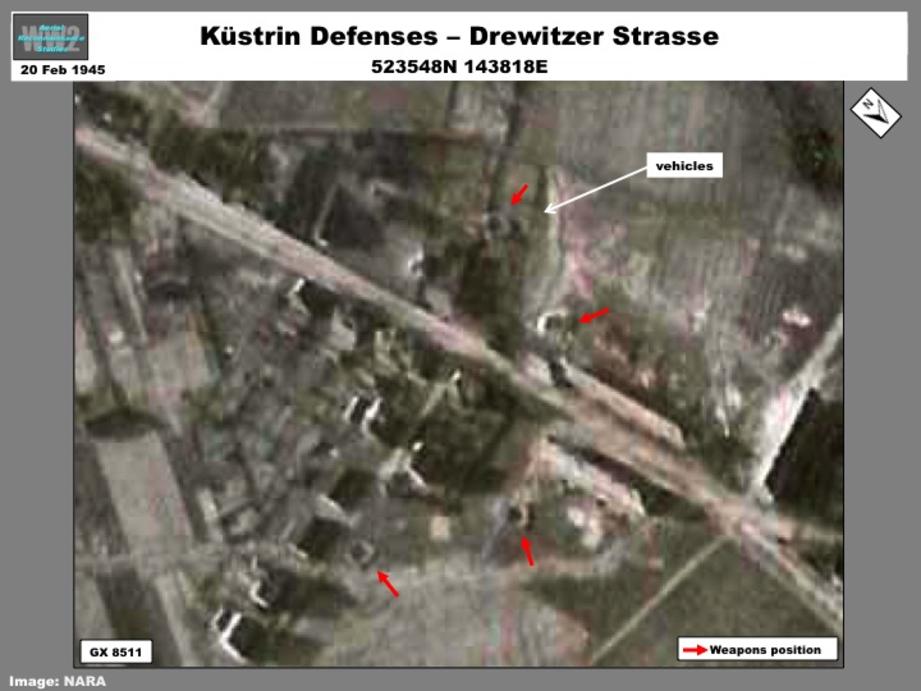 USAAF imagery from 18 March 1945 partially covered the area south of Küstrin to the Gross Neuendorf crossing point.  In preparation for the coming offensive, the Soviets had constructed a bridge/causeway more than halfway across the Oder (Graphic 17), but little other activiy was observed on the east bank.

​In contrast, a very high level of activity was observed 7 km SSE of Kietz near the town of Göritz (Górzyca), where the Soviets had established a logistical base and were preparing another crossing point (not covered).  The logistic area contained a truck park where hundreds of vehicles were dispersed in an old quarry (Graphic 18).  The site was heavily defended, with several heavy/medium anti-aircraft artillery (AAA) sites deployed in the vicinity. Pontoons and bridging materiel could be seen on the road leading to the river.  Three kilometers to the north, two light anti-aircraft sites were dployed near a rail yard, which appeared operational (Graphic 19). Three tarp-covered tracked vehicles --probably self-propelled guns-- were deployed in old artillery positions near the rail yard.

NCAP has released German target graphics of four Soviet river crossing points around Küstrin. The bridge at Kietz, south of town and the original crossing point, was damaged on 10 April (Graphic 13)  To the northwest, bridges were under construction at Alt Drewitz and Alt Schuamburg on 15 and 8 April, respectively (Graphics 14 & 15). Soviet anti-aircraft (AAA) sites had been deployed on the west bank of the Oder and extensive trenching could be seen in the area,  On 11 March a tactical bridge at Kalenzig had been damaged and five anti-aircraft sites were deployed on the east bank (Graphic 16) 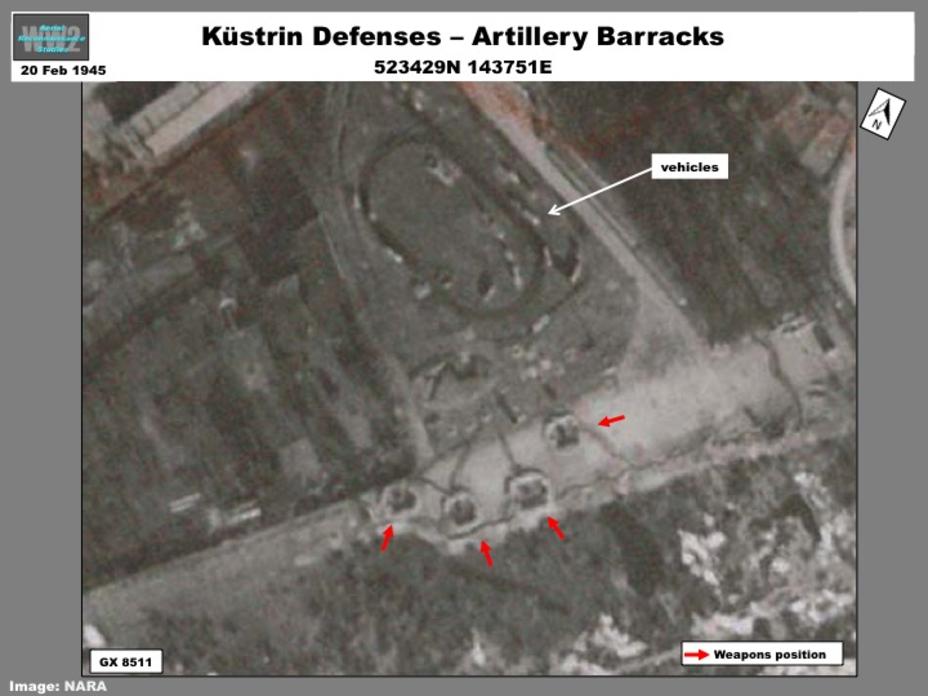 The Red Army had not yet crossed the river from Güstebiese (it would be crossed by Polish engineers), but it appeared to have positions on an island (Area F).  Little activity was discernible, although the town was partially enclosed by defensive trenching, possibly left by the departing Wehrmacht. 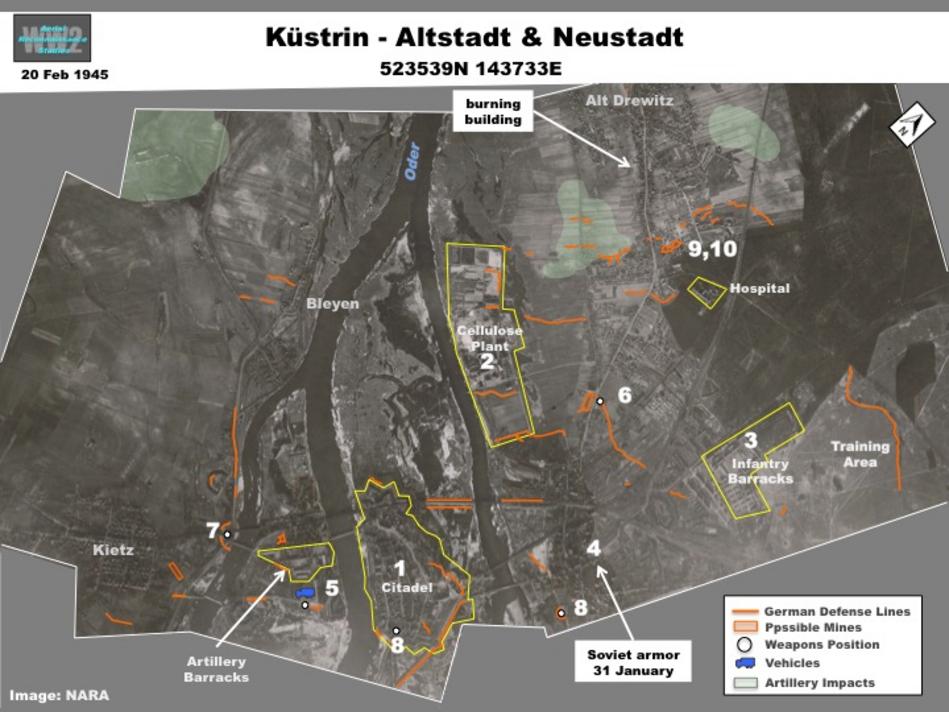 Northwest of Kalenzig, little or no ongoing activity was observed between in the vicinity of Kliewitz (Chlewice; Area D).  Unoccupied artillery and anti-aircraft positions and heavy vehicle trackage was probably associated with the river crossing at Kienetz and Gross Neuendorf  (see article Vistula-Oder Operation), a short distance west-northwest across the river.  Kienetz and probably Gross Neuendorf were either cloud covered or obscured by tactical smoke. 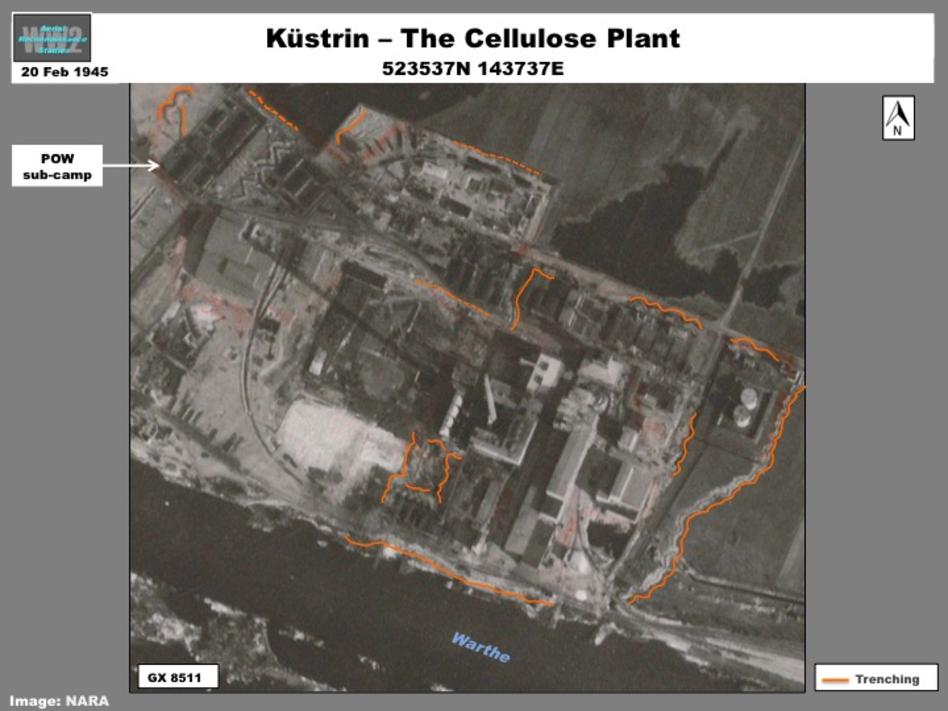 The great fortress of Küstrin, located at the junction of the Oder and Warthe rivers, was laid down in its final form in 1535.  In 1832, the Vorflut canal was constructed west of the citadel, isolating it and the town's Altstadt on an island.  Later, as the town grew into an important rail junction, the the Neustadt expanded to the right bank of the Warthe. In addition to major rail facilities, the Neustadt contained   a cellulose plant, hospital and the Stülpnagel (infantry) bararcks that became key defensive points. 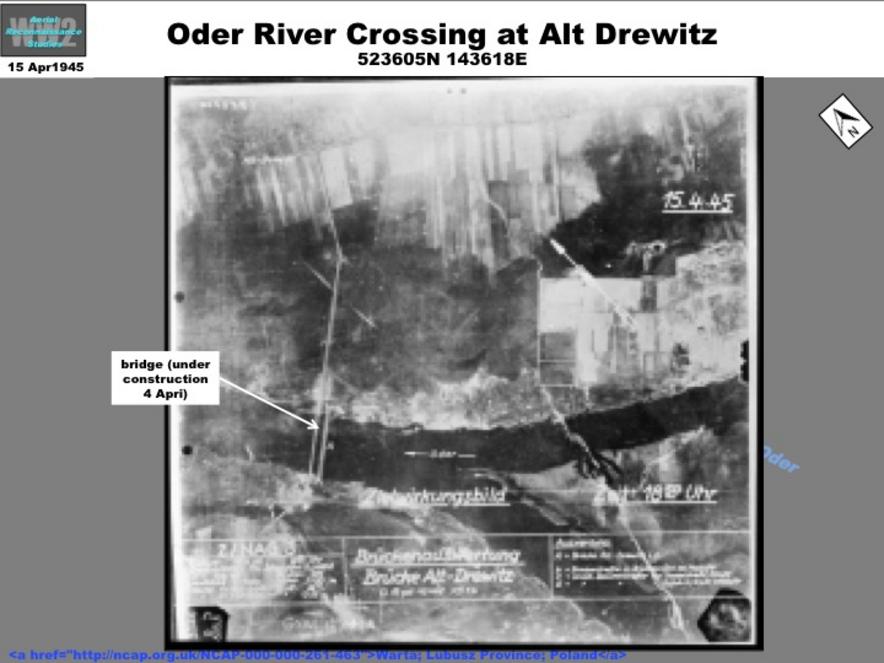 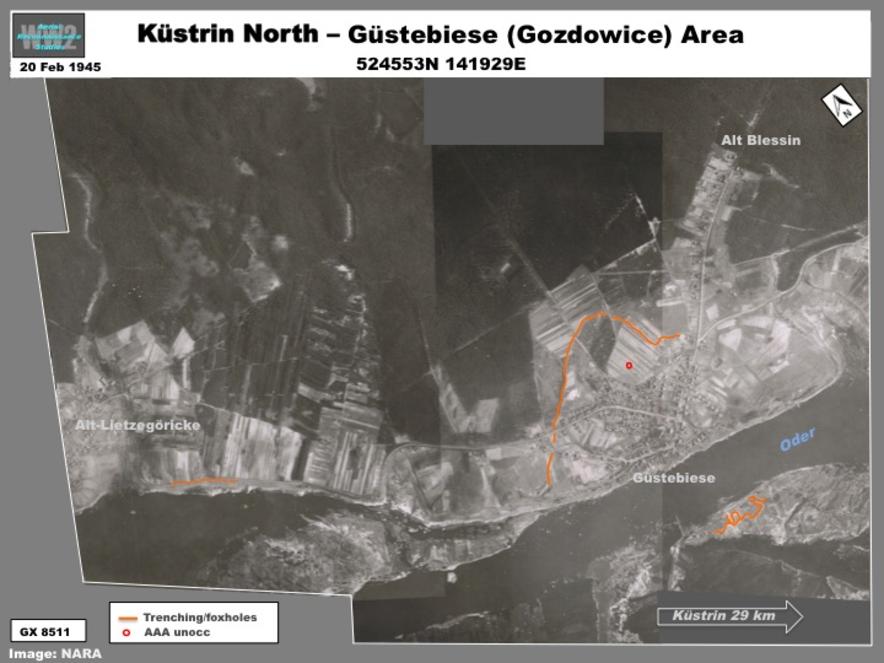 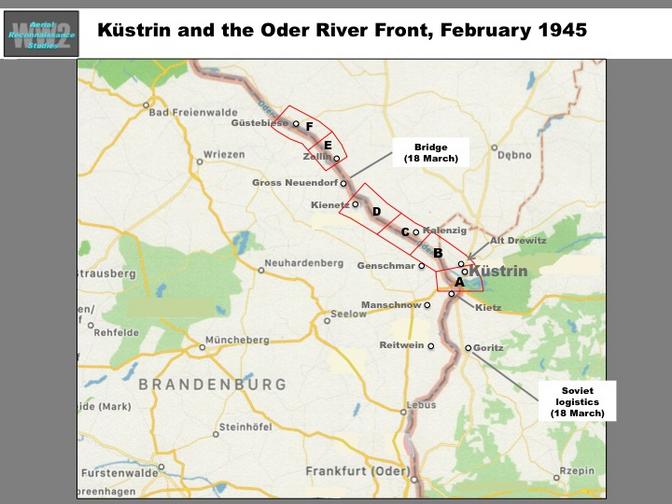 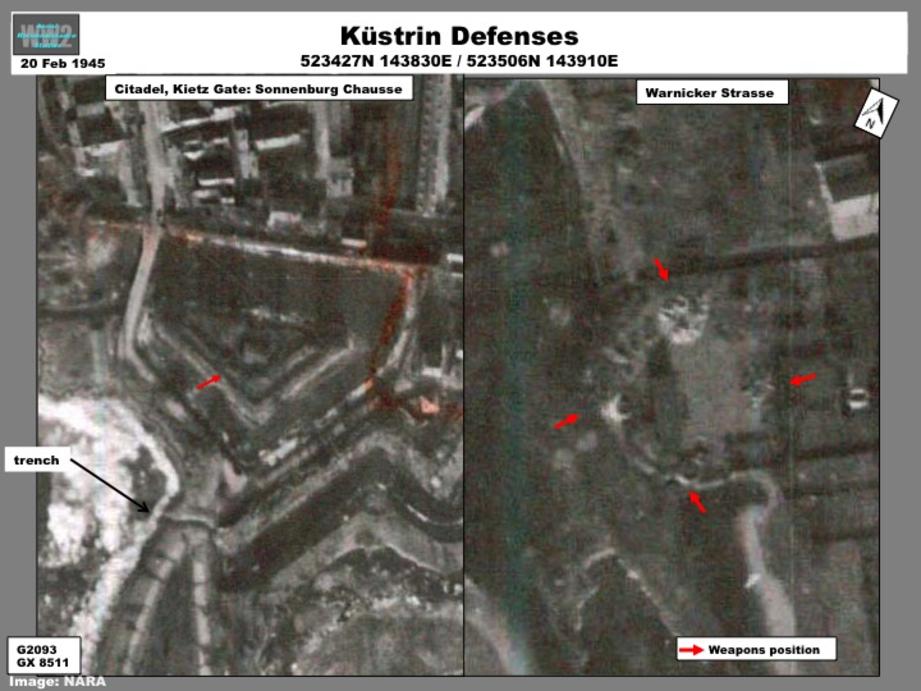 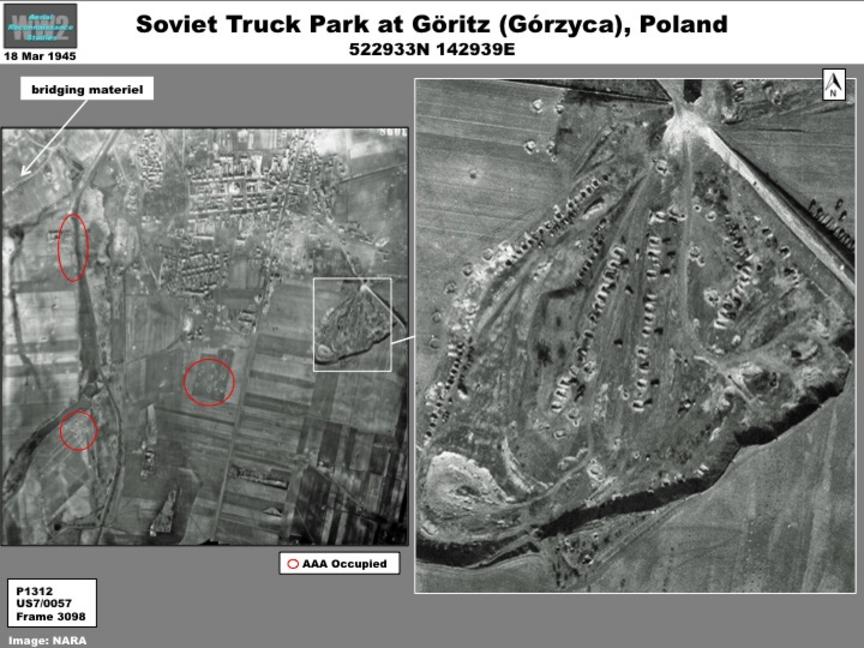