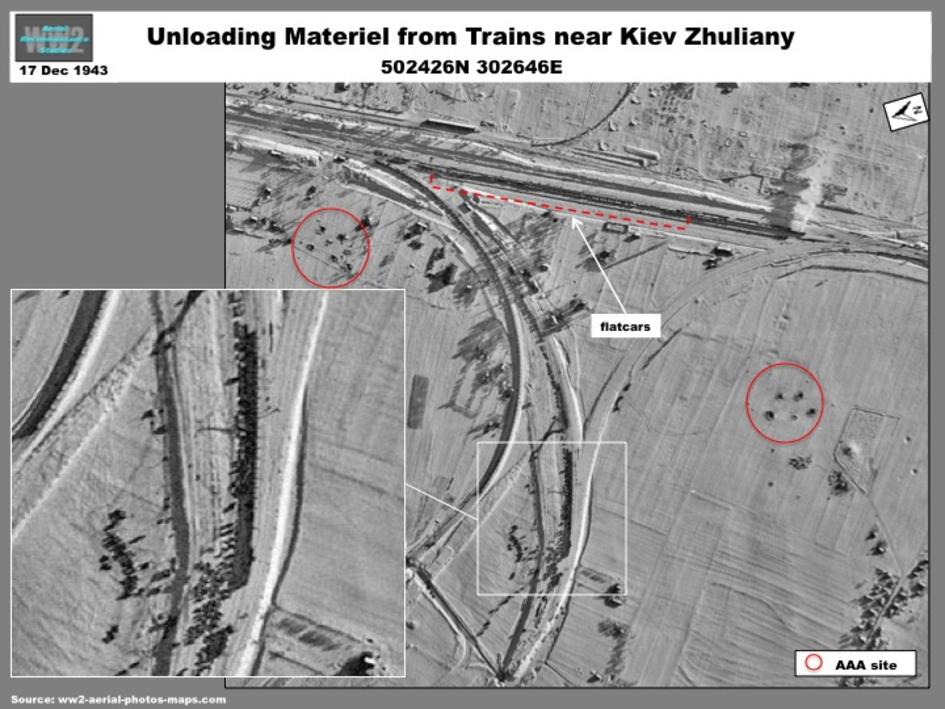 By 17 December a Soviet fighter regiment with 52 aircraft was deployed at Kiev Zhuliany, the city's main airport (Graphic 7).  Logistical activity was observed at the adjacent rail yard, where several trains were parked.  Rail cars were being offloaded at the end of one spur and a number of flatcars --an indication that vehicles had been offloaded-- were were in the rail yard (Graphic 8) Two anti-aircraft (AAA) sites were deployed. 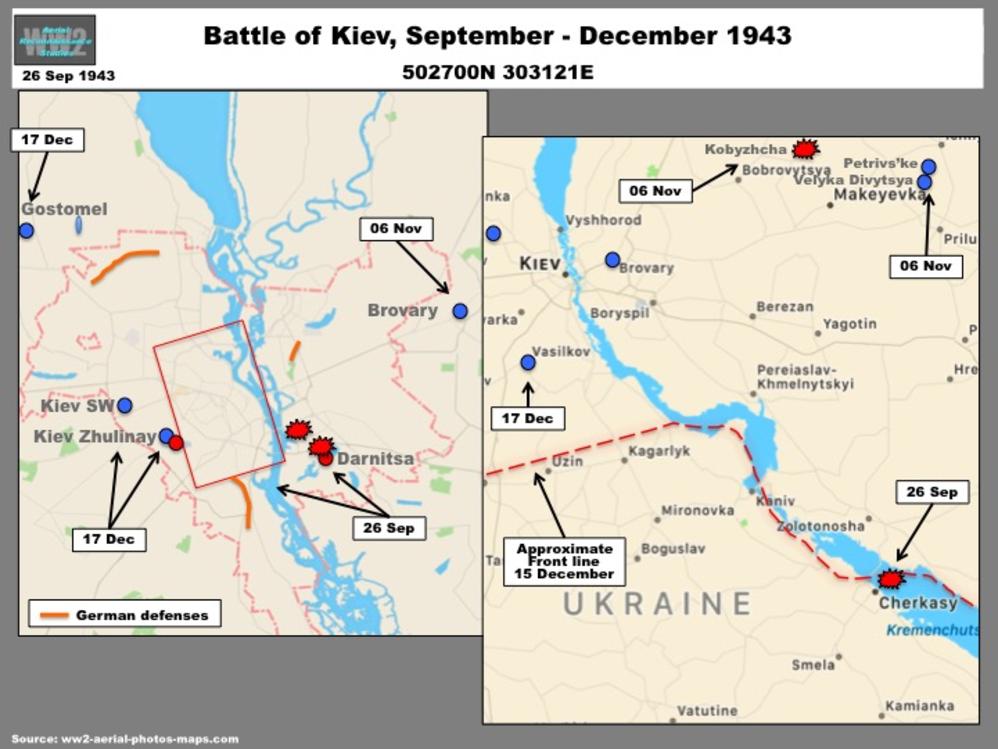 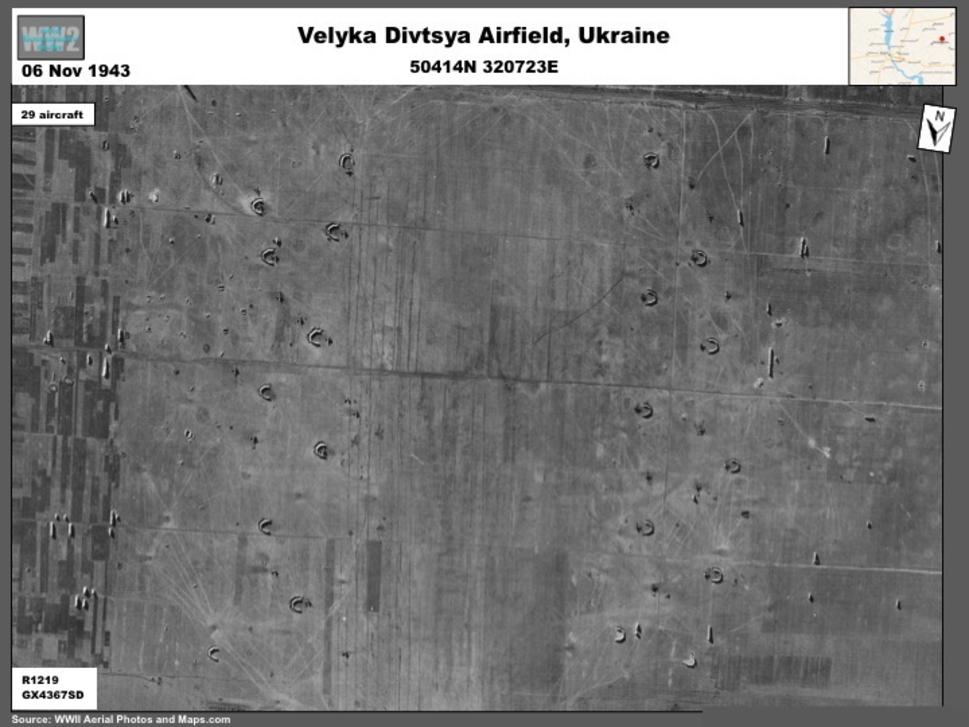 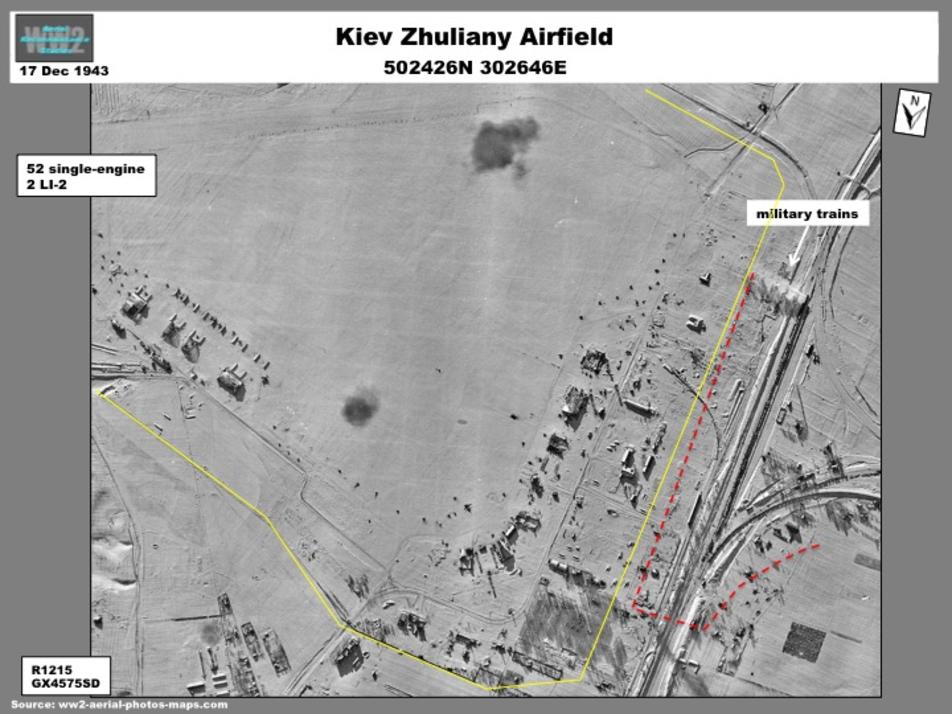 The Battle of Kiev, September-December 1943

Kiev fell to the Soviets on 6 November and although there was no available coverage of the city at that time, Luftwaffe reconnaissance continued monitoring enemy activity east of the city.  In the immediate area of Kiev, an airfield at Brovary was largely intact except for trenching on the landing area and in the vicinity (Graphic 4).   German-built parking revetments were covered with netting or tarps suggesting they may have been occupied with equipment.  Only a few possible abandoned German aircraft were present but 90 km east-northeast 29 unidentified Soviet aircraft were deployed at a tactical field at Velyka Divitsya (Graphic 5).  Revetments had been constructed for the unit.  Not far away, at Petrivs'ke the Soviets had created a dummy airfield with fake revetments and several dummy aircraft (Graphic 6).   Evidence of recent bombing or shelling was observed at Kobyzhcha (map)

On 17 December a Soviet communications unit with 26 dispersed vehicles was deployed at Vasylikiv Airfield, 30 km southwest of Kiev and about 20 km north of the front lines (Graphic 11).  Each vehicle was covered with a tarp and surrounded with three or four masts possibly composing standard or four-leg quadrant high-frequency antennas (transmitter).  If this group of vehicles was an actual signal deployment and not a decoy (it was quite near the front lines), then it probably supporteda command post deployed somewhere in the vicinity.  Vasylikiv Airfield was a pre-war Soviet airfield with an unfinished hard surface runway. 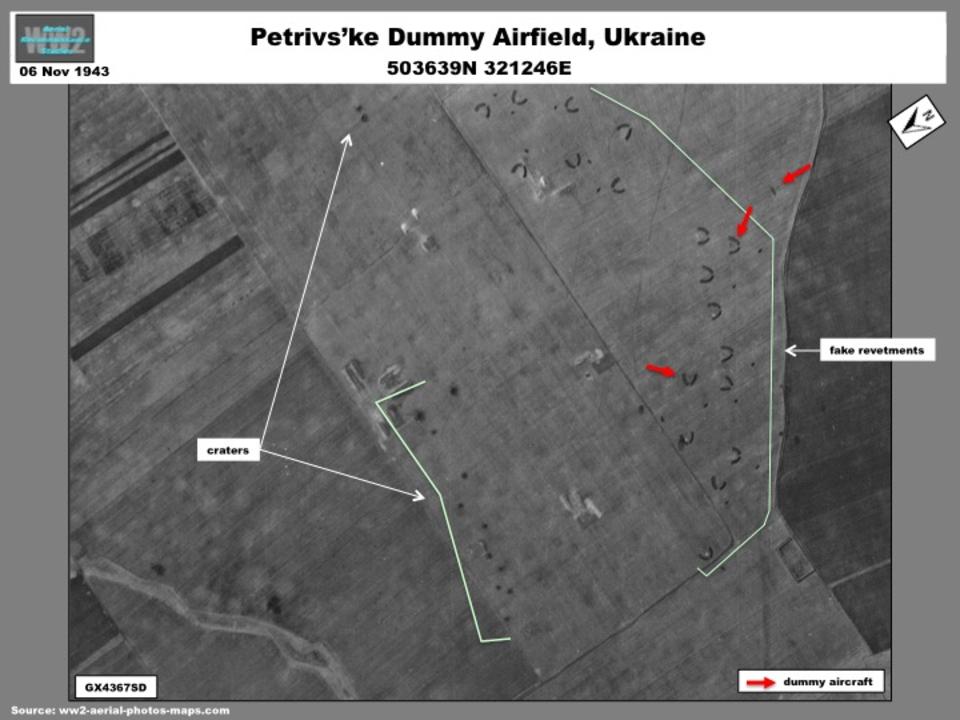 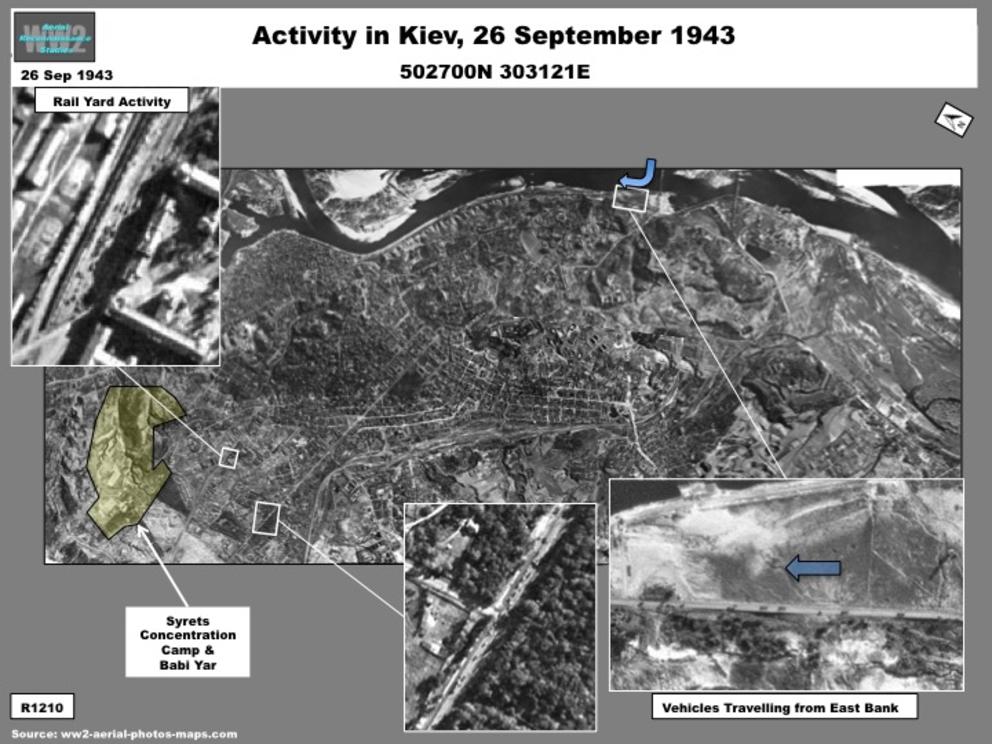 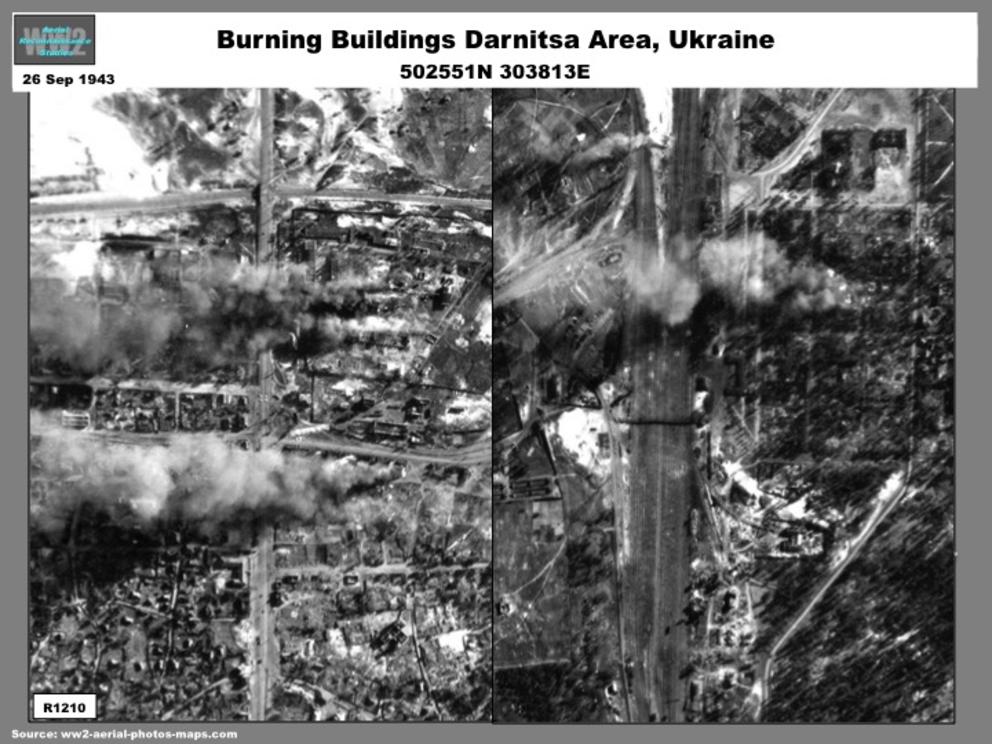 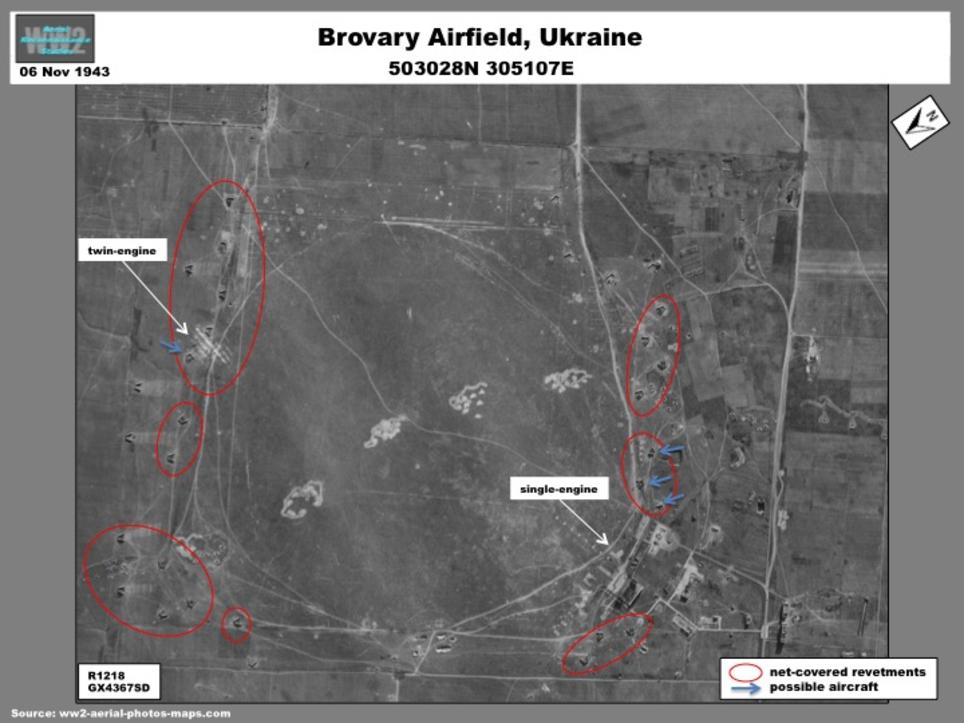 Military trains were also observed 5 km northwest of Zhuliany (Graphic 9).  One train was being offloaded while another had been dispersed into sections.  Eighteen PO-2 biplanes were at an adjacent airfield, suggesting the presence of a reconnaissance or liaison unit.  The airfield, which is no longer in existence, likely was associated with the nearby Aeronautical University.   Forty-five probable fighters were deployed at Gostomel, 27 km nowthwest of Kiev (Graphic 10). 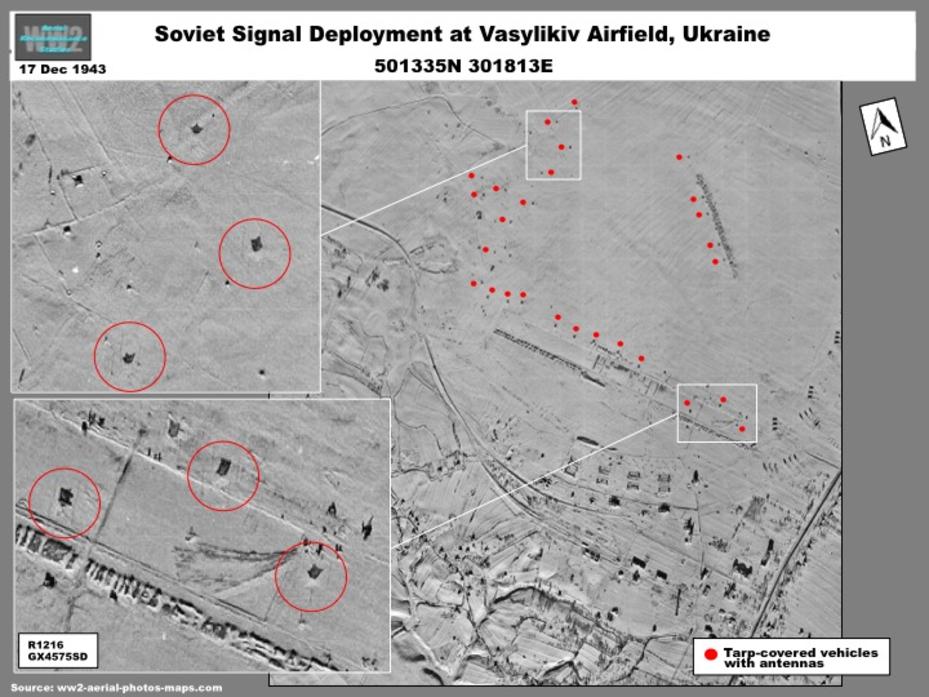 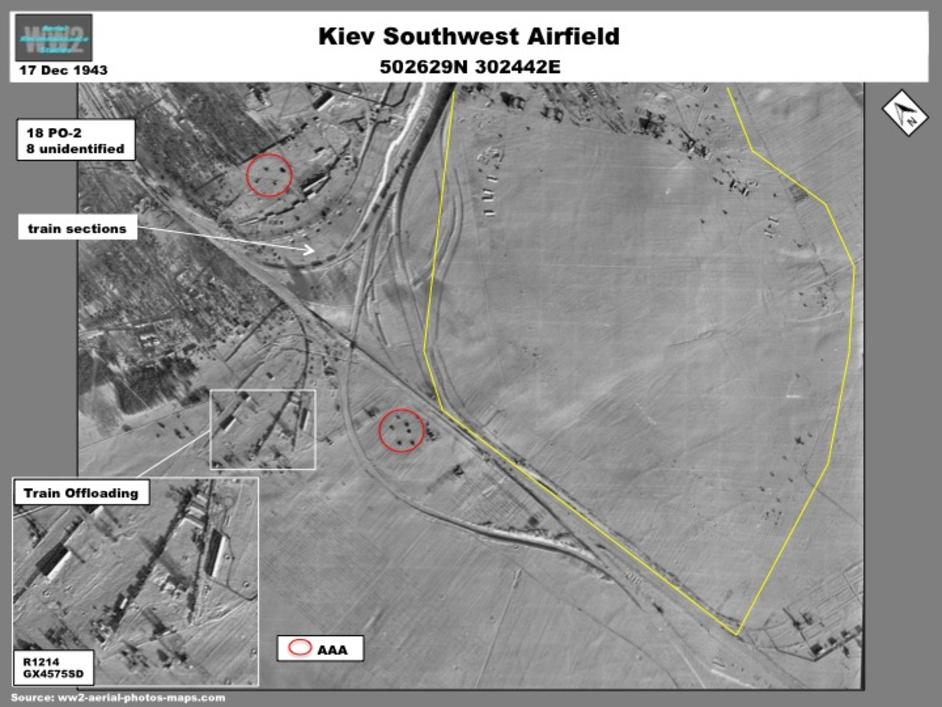 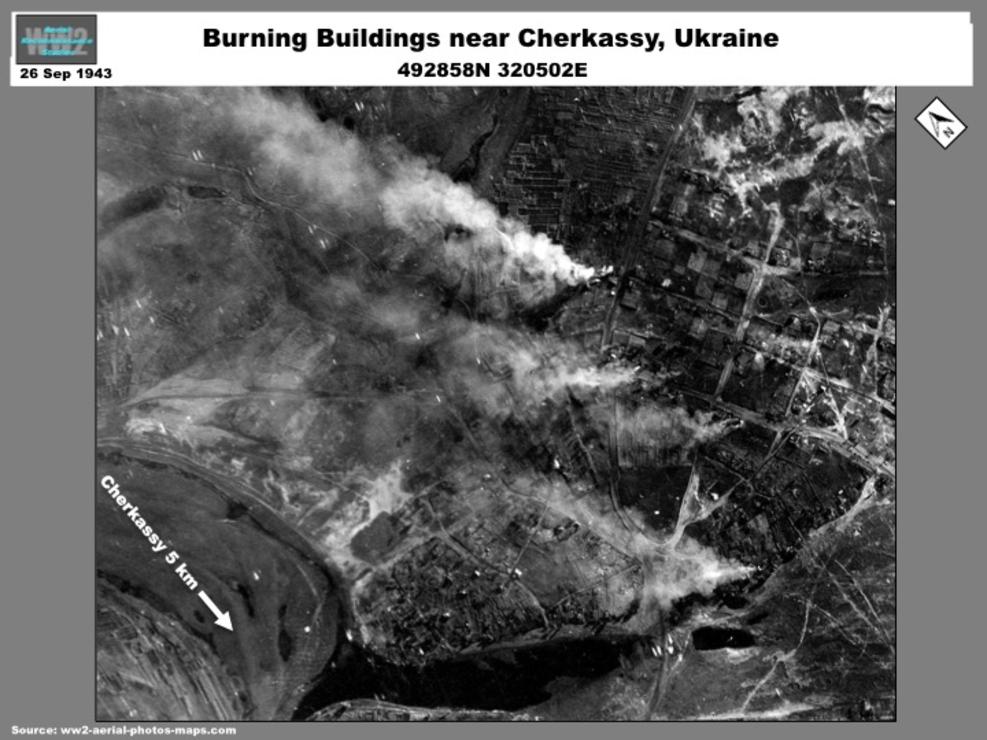 The Red Army retook Kiev on 6 November during the Kiev Strategic Offensive  (3 October - 22 December 1943) setting the stage for the Dnieper-Carpathian Offensive (24 December 1943 - 14 April 1944) that liberated western Ukraine (see earlier article).  When covered by Luftwaffe reconnaissance on 26 September 1943, Kiev was still occupied by the Wehrmacht, but preparations were being made for departure.  Perhaps most significantly, activity was observed at the Syrets Concentration camp and Babi Yar (see concentration camp article), but tank ditches had been excavated at key points and vehicular activity could be seen on streets and at a rail yard.  Several group of vehicles (some not shown) were returning from the east bank of the Dnieper (Graphic 1).  The vehicles were involved in the destruction of buildings in Darnitsa, where fires were burning in several areas and a number of other vehicles could still be on roads (Graphic 2).  Buildings were also burning across the river from Cherkassy, 160 km to the southeast (Graphic 3). 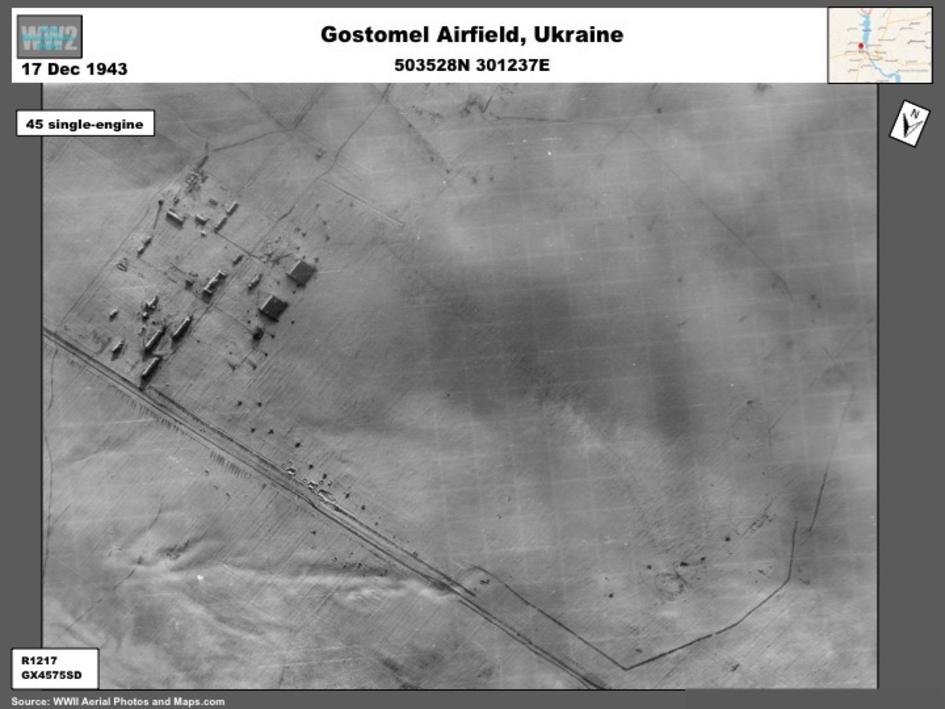 Back to Former USSR/Ukraine
View on Mobile