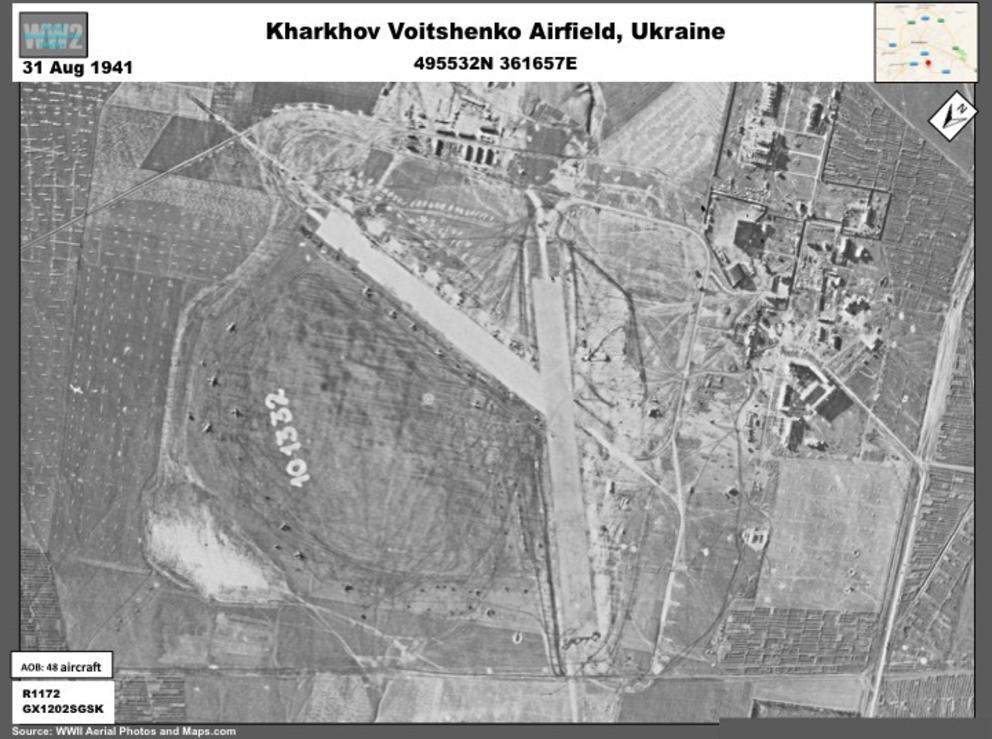 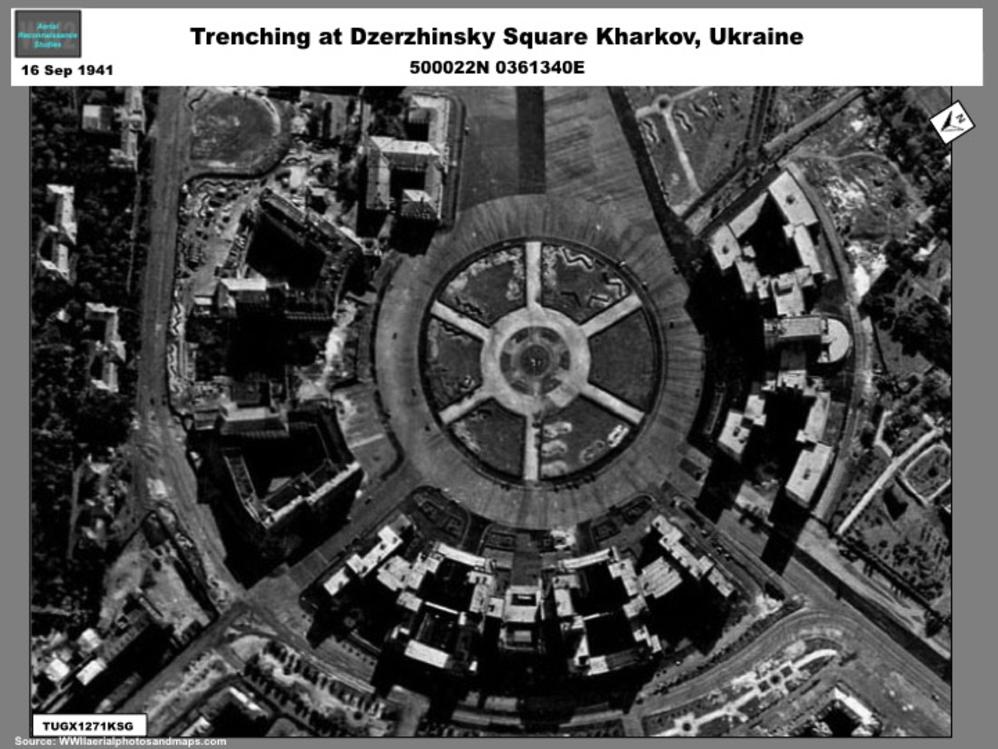 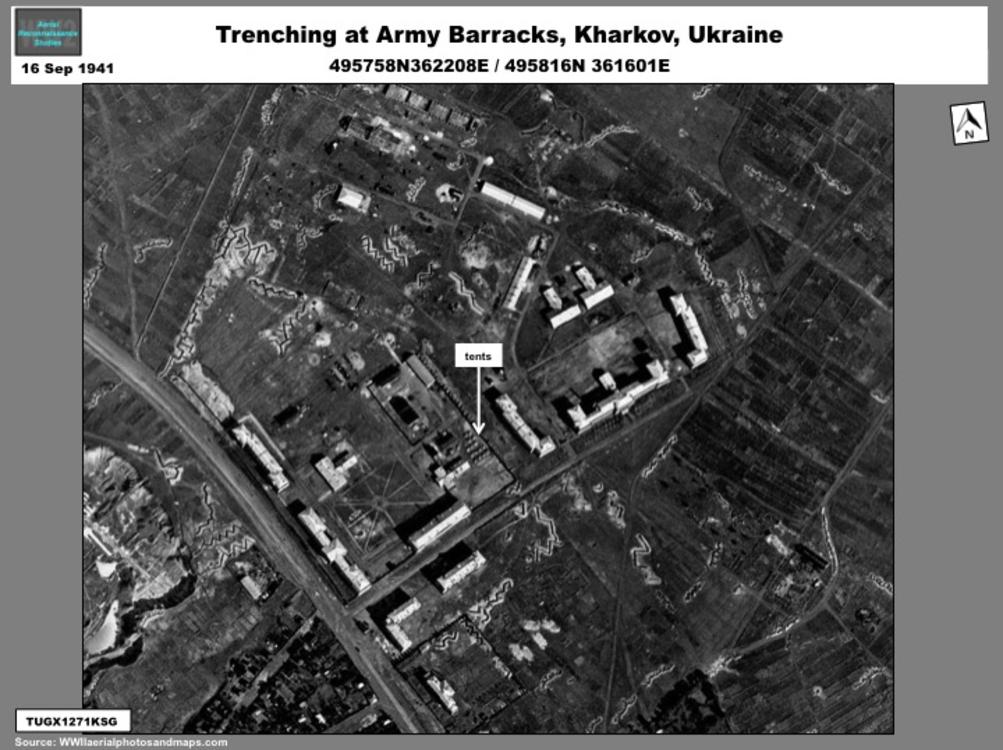 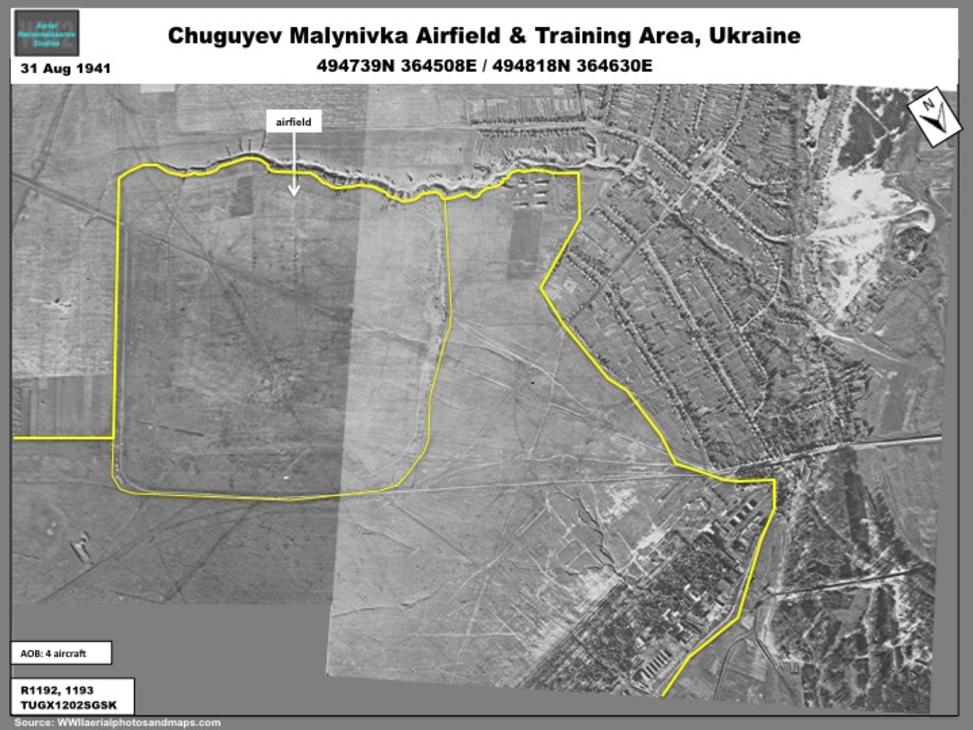 Kharkov fell on 24 October 1941 and as the front stabilized immediately to the east the city became a major Luftwaffe base from which to attack and reconnoiter the enemy.  On 8 January 1942 a German reconnaissance sortie covering Chernyanka Airfield (Graphic 12; 40 aircraft) in the soviet forward area captured an attack by a possible JU-88 flying over the field.  It appeared that the plane's target was a possible military train on tracks west of the airfield.

Tank Plant No. 75, previously the Kharkov Locomotive Plant, was the main military factory in the city.  At the time of the invasion, the plant produced engines for the new T-34, but it had been involved in the production of several earlier tanks.  Another facility, the Tractor Plant (annotated on German graphics a Tank Plant No.137), produced civilian and military tractors.  By the time the two plants were imaged on 25 September, most machinery had already been evacuated to cities in Urals, but smoke/steam coming from some buildings and cooling towers indicated the plants were still occupied (Graphic 3).  Activity suggesting the movement of equipment from Kharkov was identified at a related facility probable armor testing facility on the west side of Kharkov.  Between 24 and 25 September about 80 vehicles were moved to a clearing north of the maneuver area; the vehicles had been parked in convoy (Graphic 4).  Other vehicles were on roads in the clearing and vehicular activity had increased significantly on the highway south of the test facility since the 24th. 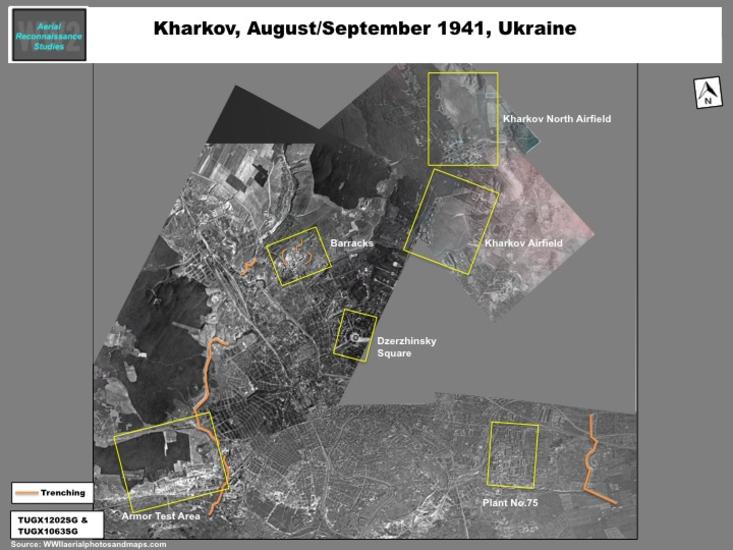 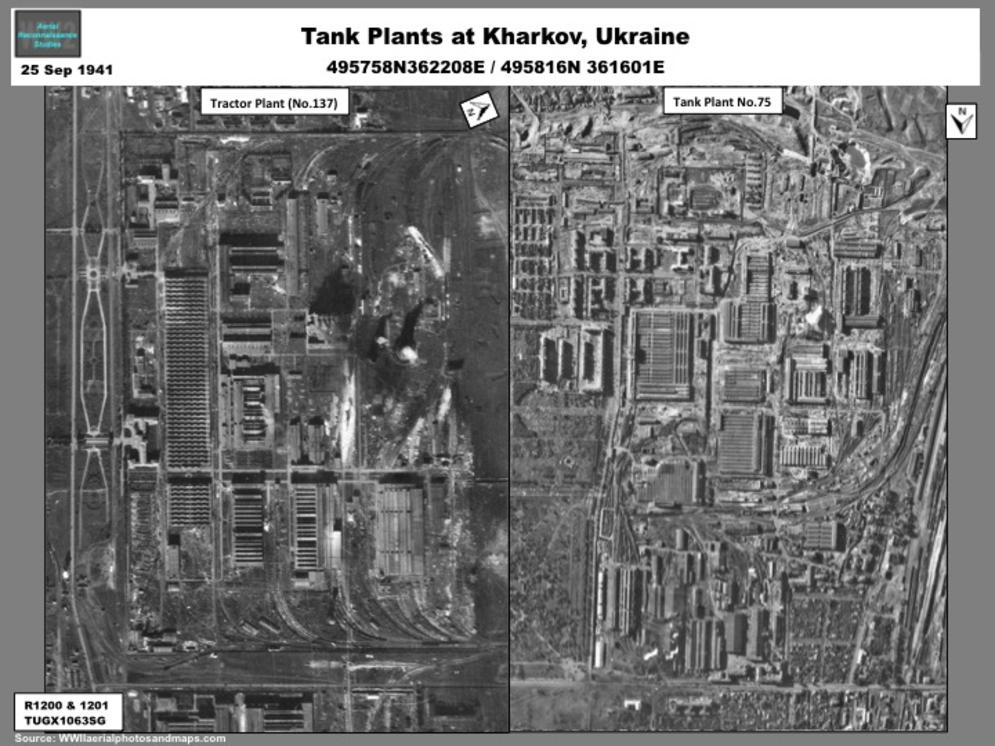 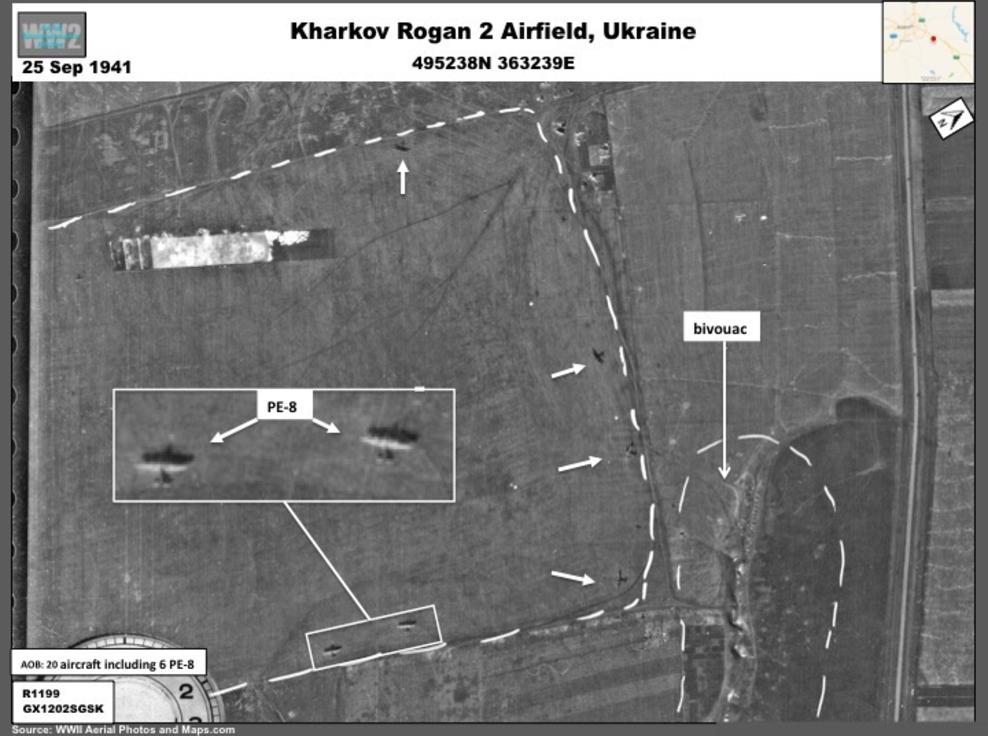 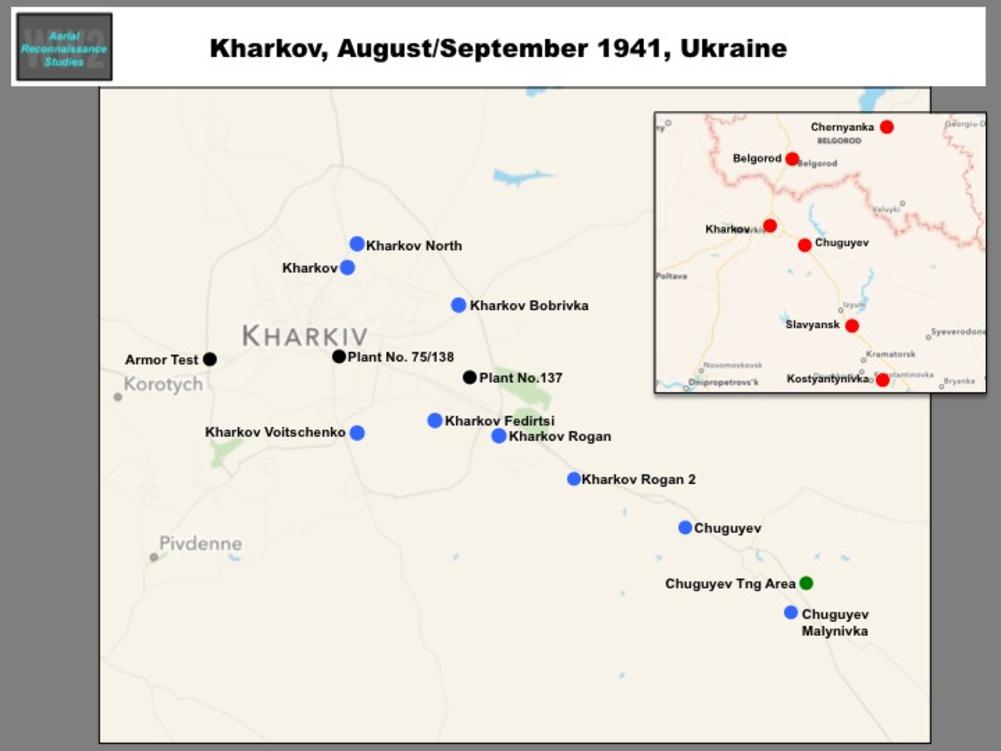 With nine airfields between them, Kharkov and the nearby town of Chugyuev were a major hub for the Soviet Air Force and aircraft development.  Most of the airfields were occupied, probably reflecting the relocation of aircraft to the rear after the invasion.  Kharkov Rogan Airfield (Graphic 5; 48 aircraft on 31 August), with an associated depot, appeared to be the main Soviet Air Force base in the city.  By 25 September a total of 10 PE-8 heavy bombers had deployed to Rogan and a nearby dispersal field, Kharkov Rogan 2 (Graphic 6; 20 aircraft); a bivouac was deployed in a ravine next to the dispersal field.  Other important airfields included Kharkov Voitshenko (Graphic 7; 48 aircraft) with two new all-weather runways, Kharkov North, which supported the Kharkov Avaition Institute and Kharkov Airfield (30 aircraft), with a factory that designed and produced the SU-2 aircraft (Graphics 8 & 9).  Other fields included Kharkov Fedirtsi (20 aircraft), a possible pilot school, Kharkov Bobrivka (15 aircraft), Chuguyev (30 aircraft), and Chuguyev Malynivka (Graphic 10; four aircraft).  The latter field was incorporated in the training area for army barracks at Chuguyev. 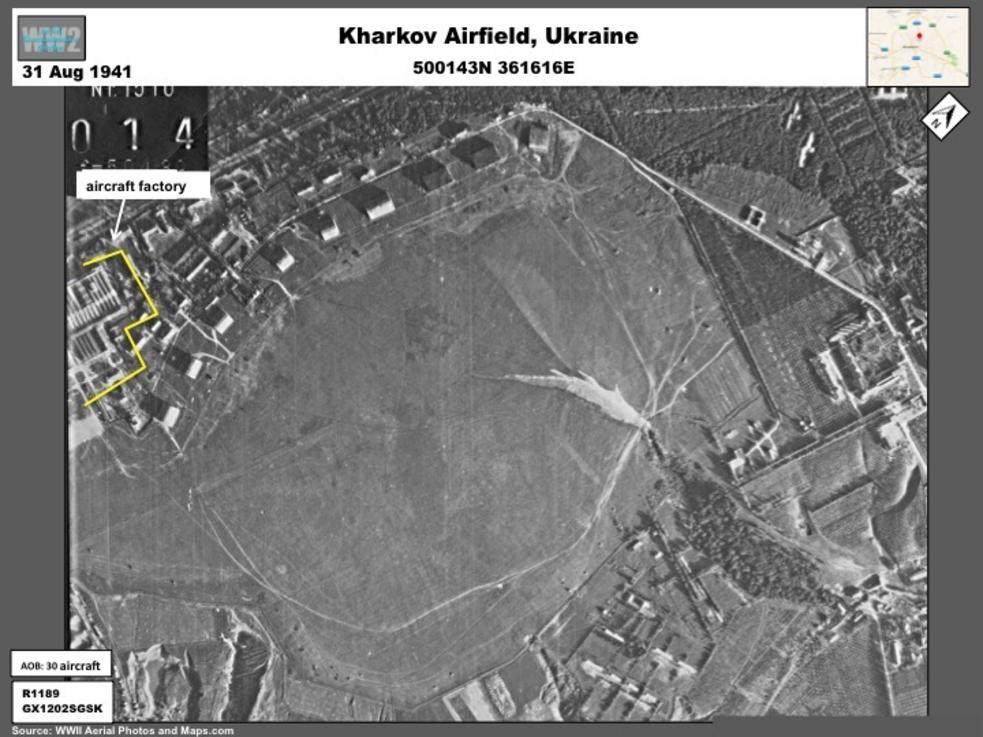 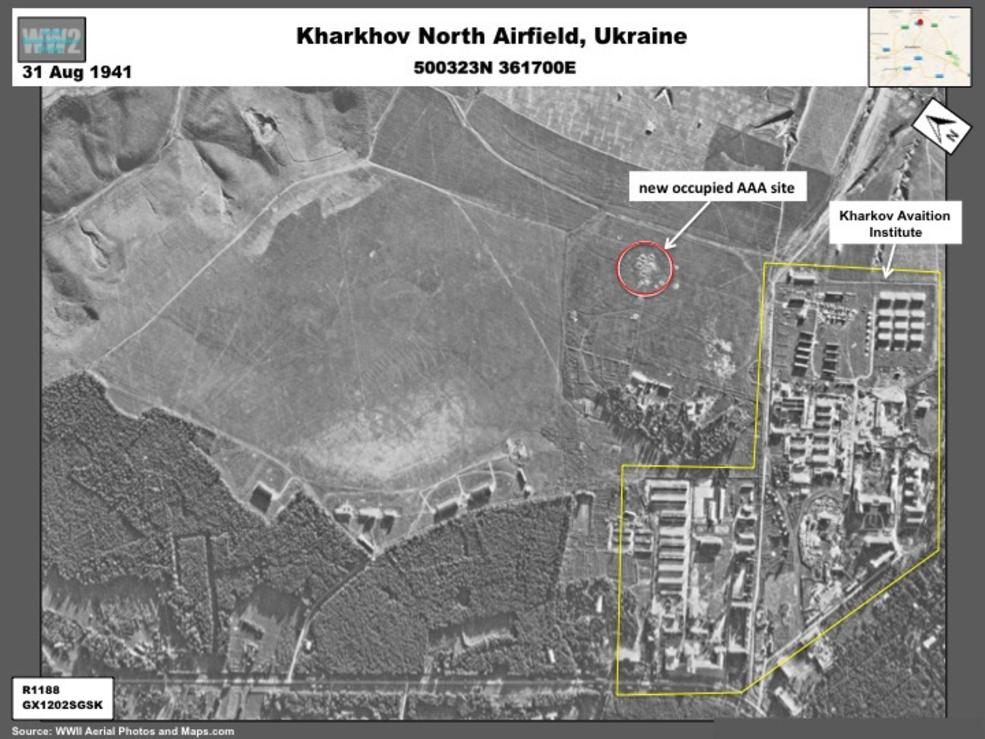 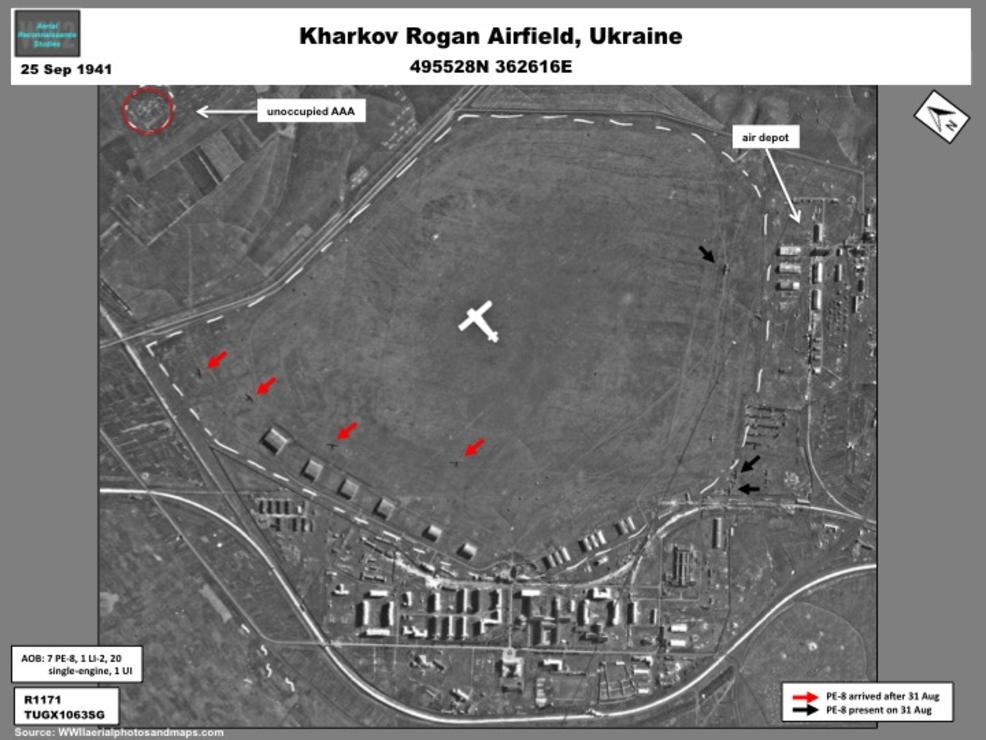 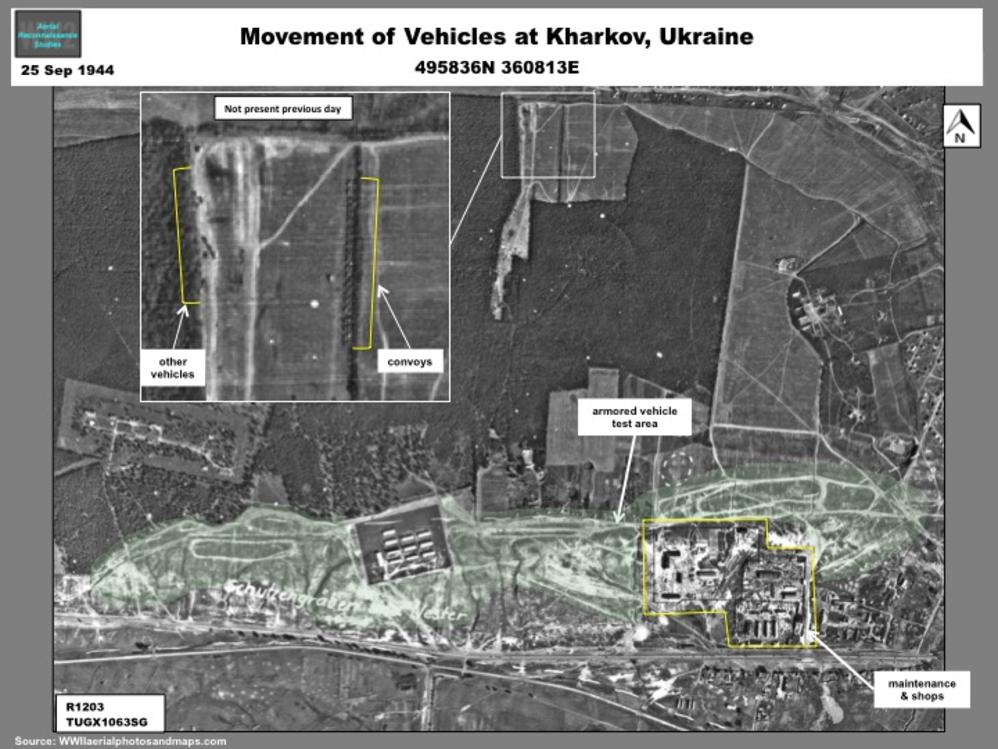 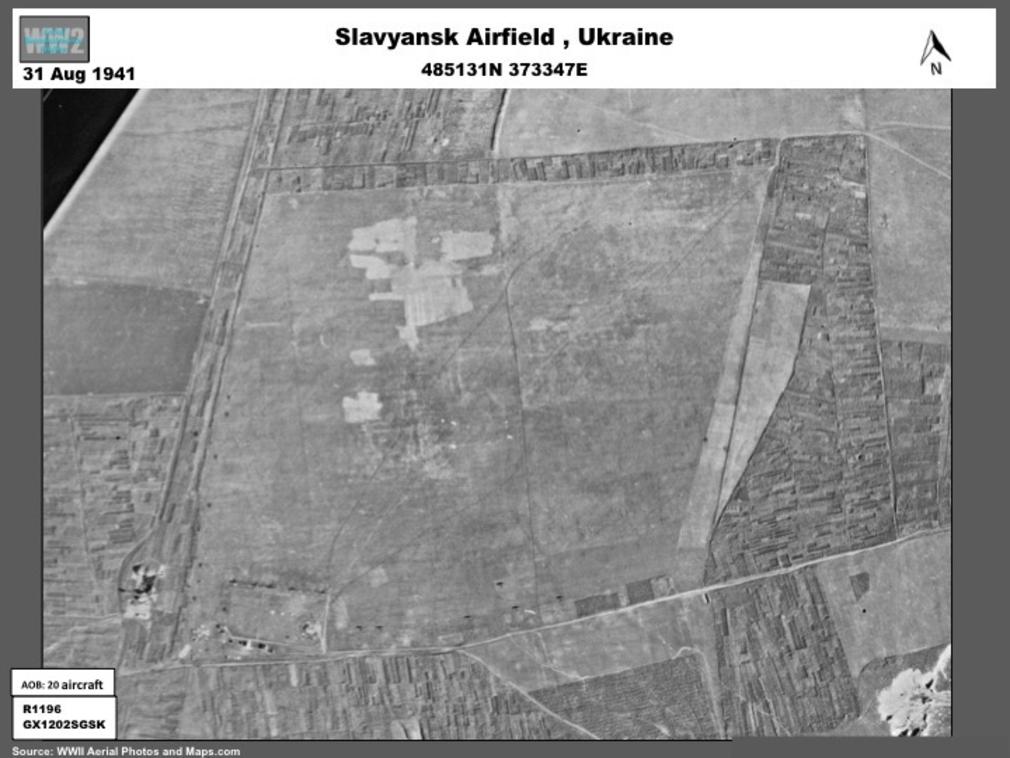 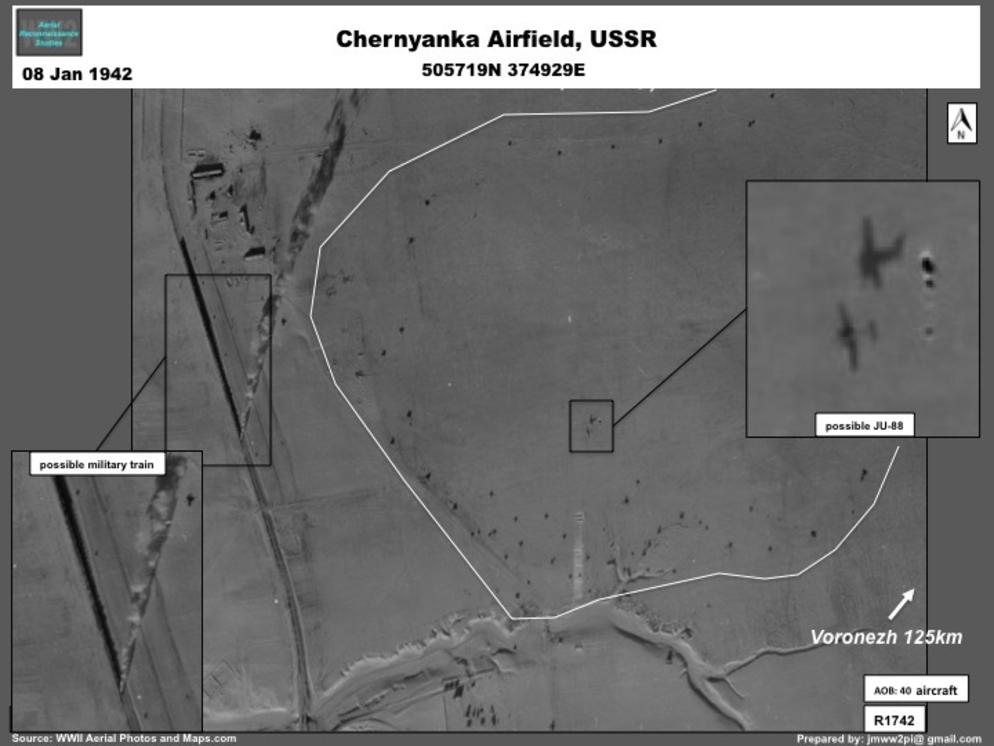 Several Luftwaffe reconnaissance sorties in August and September 1941 provided relatively complete coverage of  Kharkov (mosaic, right) a month before the city was captured by the Germans. The coverage showed defensive preparations, as well as activity at two arms plants and nine airfields (map). Coverage of the surrounding area showed defenses and aircraft deployments at three other locations.  Finally, a reconnaissance sortie in early January recorded a possible German attack at a nearby Soviet airfield after Kharkov had been taken.

In additon to the defensive construction around the city, constructon of personnel trenching was widespread.  Graphic 1 and 2 below show trenching around a new army barracks and around Dzerzhinskiy Square, which was still under construction.