Soviet armored units were marshaled 10 km west of Balassagyarmat by 4 February.  A total of 67 tanks were deployed within the villages of Patak and Detjar.  Graphic 12 shows 22 of the tanks deplloyed in orderly, snow-cleared parking positions (Graphic 13).  An absence of air defenses in the vicinity of the villages indicates a high degree of security in this sector.

By 5 November the Soviet Air Force had occupied Kecskemet Airfield, a former German base 45 km southwest of Szolnok (Graphic 4).  The hard surface runway had been cratered and support facilities destroyed, but 28 YAK fighters were using the field.  Fourteen derelict German aircraft could also be seen.  Further west, a ground attack unit with 20 IL-2 was operating from Ocseny by 25 December; improvements had been made to the runway and new revetments had been constructed (Graphic 5).  By 19 December the field at Nyiregyhaza, 60 km northeast of Arokto, had  already been passed up by the Red Army, but 16 aircraft were still present. 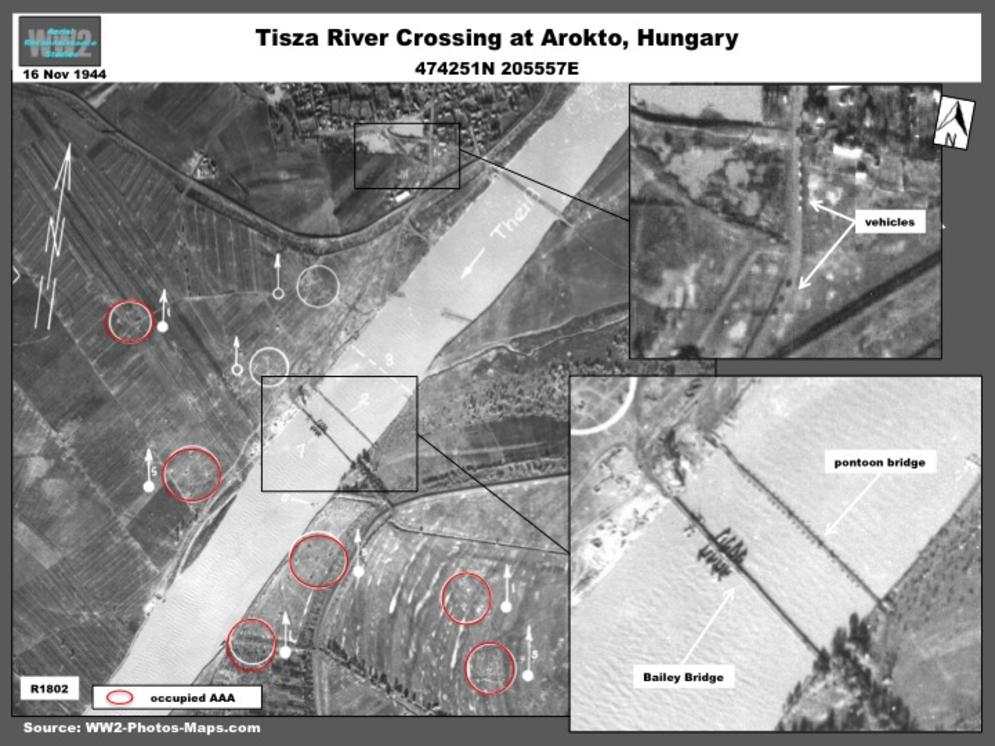 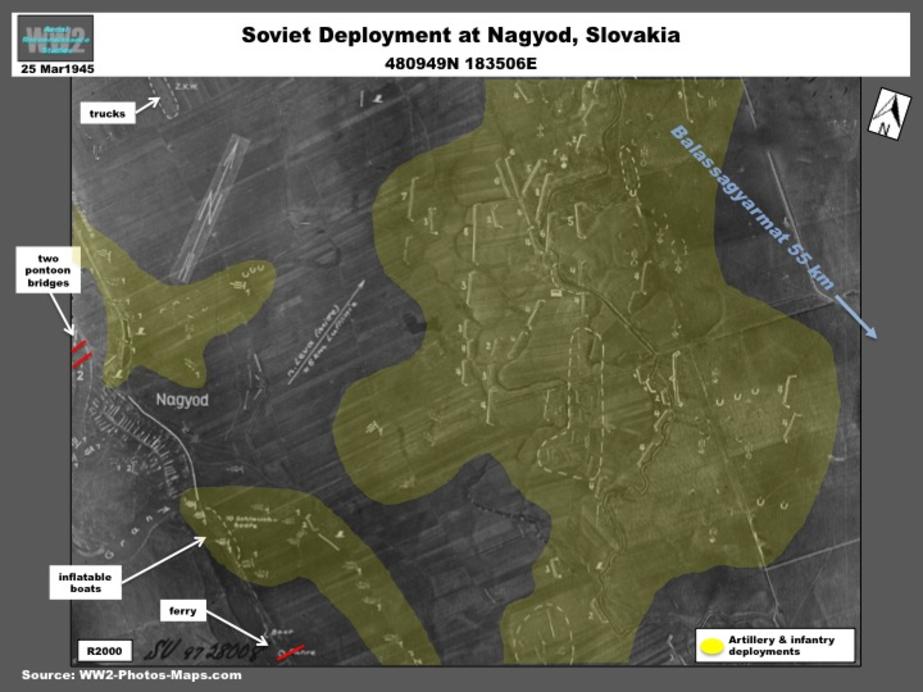 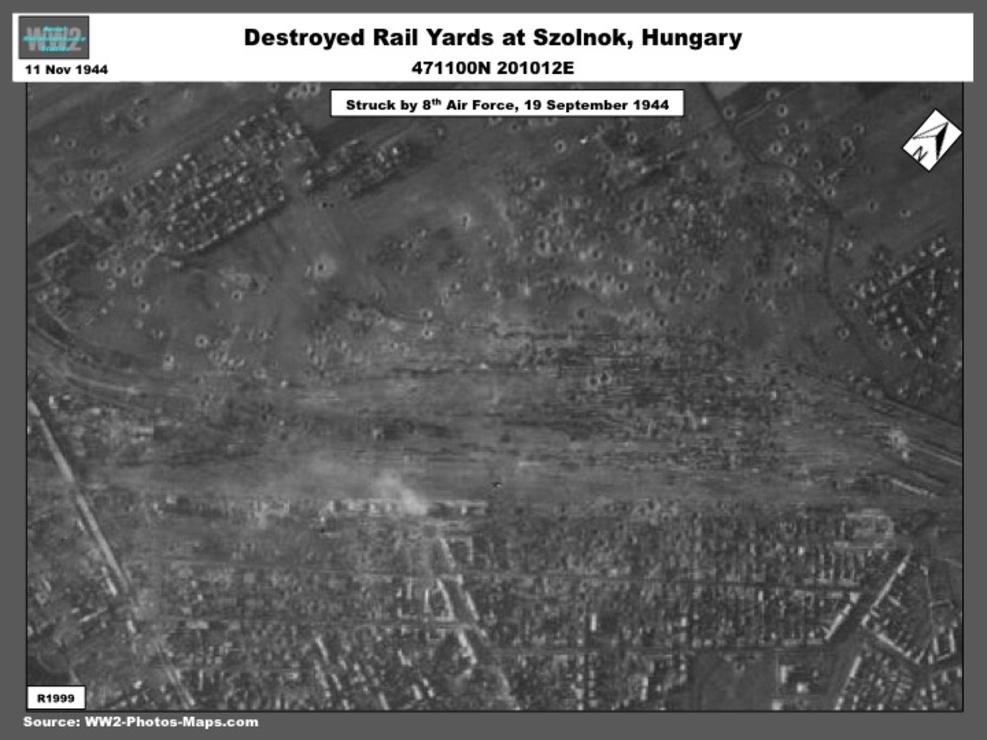 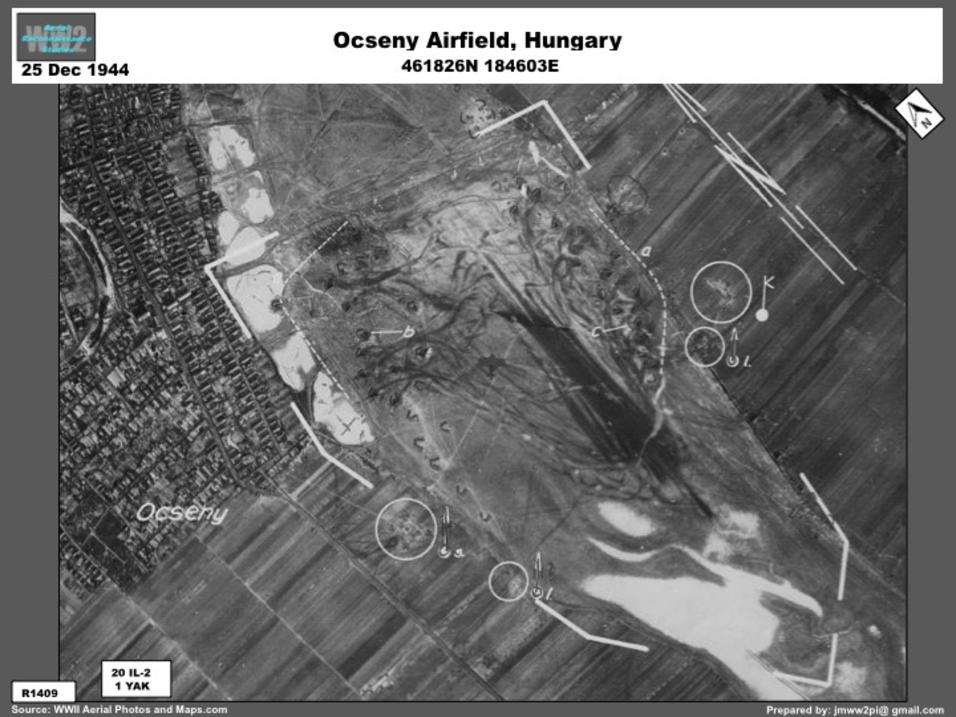 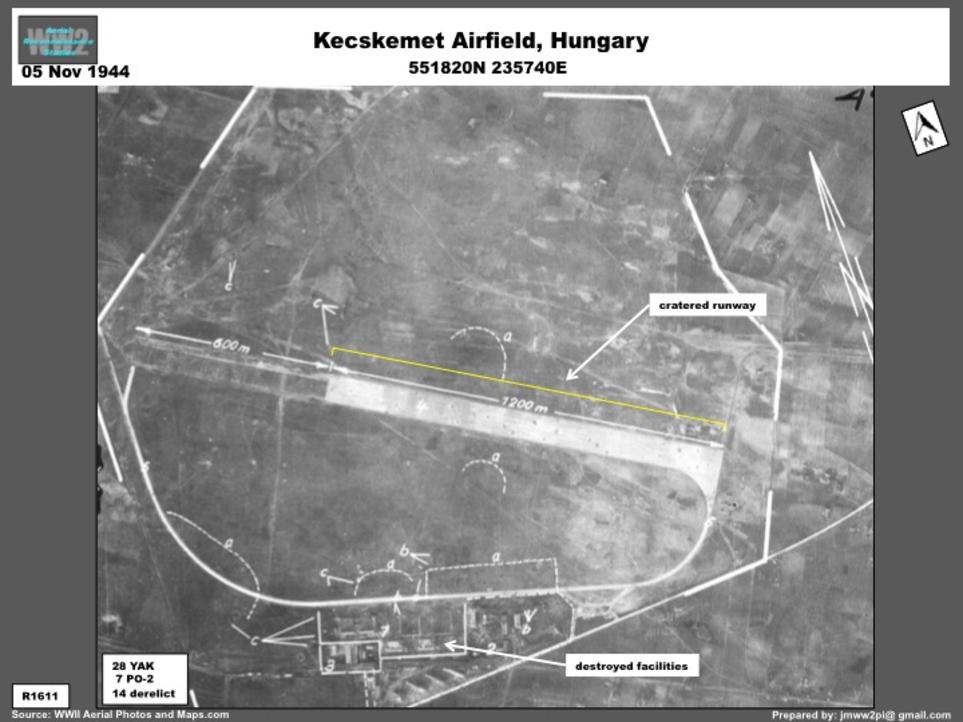 By March 1945 the Red Army had pushed into Slovakia on the way to Vienna.  A Luftwaffe reconnaissance photo from 25 March 1945 shows a large deployment near Nagyod, 55 kilometers northwest of Balassagyarmat (Graphic 13). The nearby river had been crossed by tactical bridges, a ferry and assault boats. 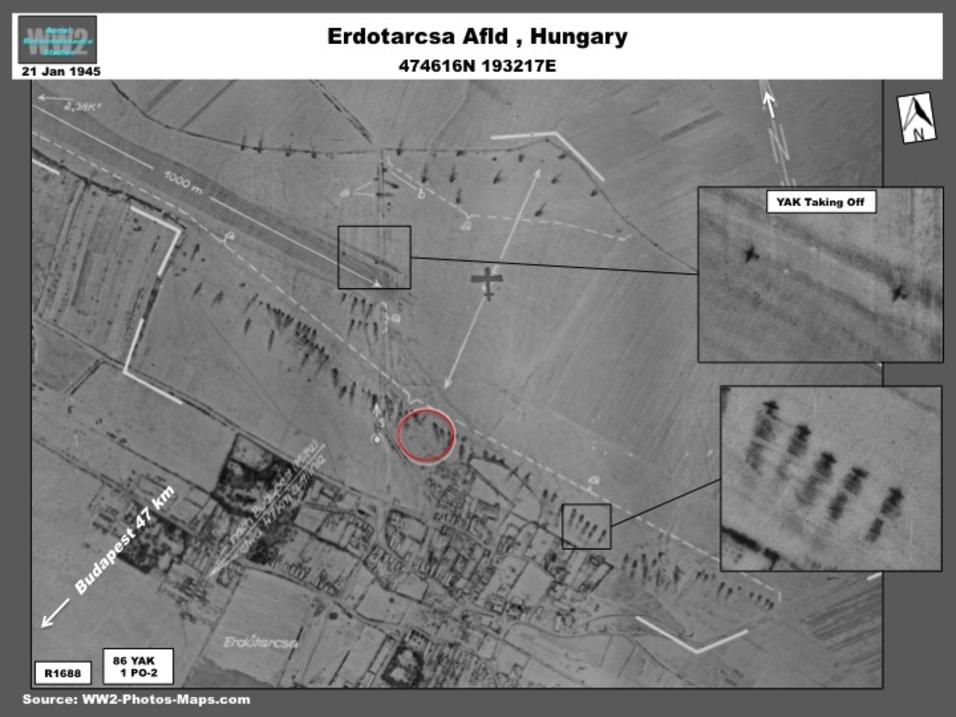 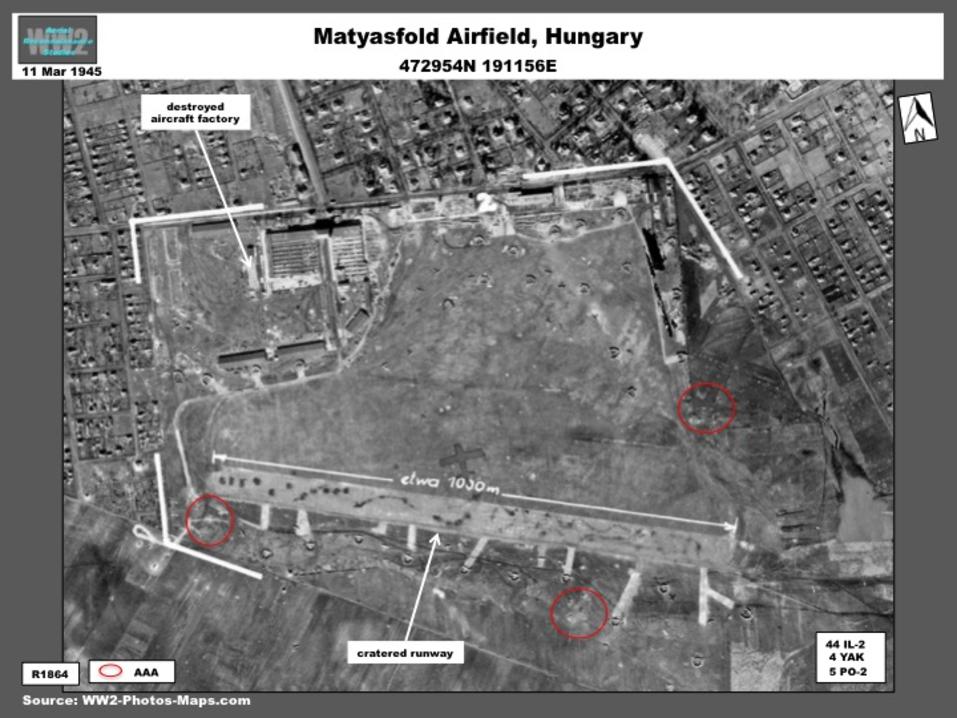 The Red Army quickly occupied most of Hungary by mid-1944 but was not able to not take Budapest until February 1945.  Available Luftwaffe reconnaissance images capture some Soviet activity during the early part of the invasion as well as a buildup of air and ground forces for the final push into Slovakia and Austria. 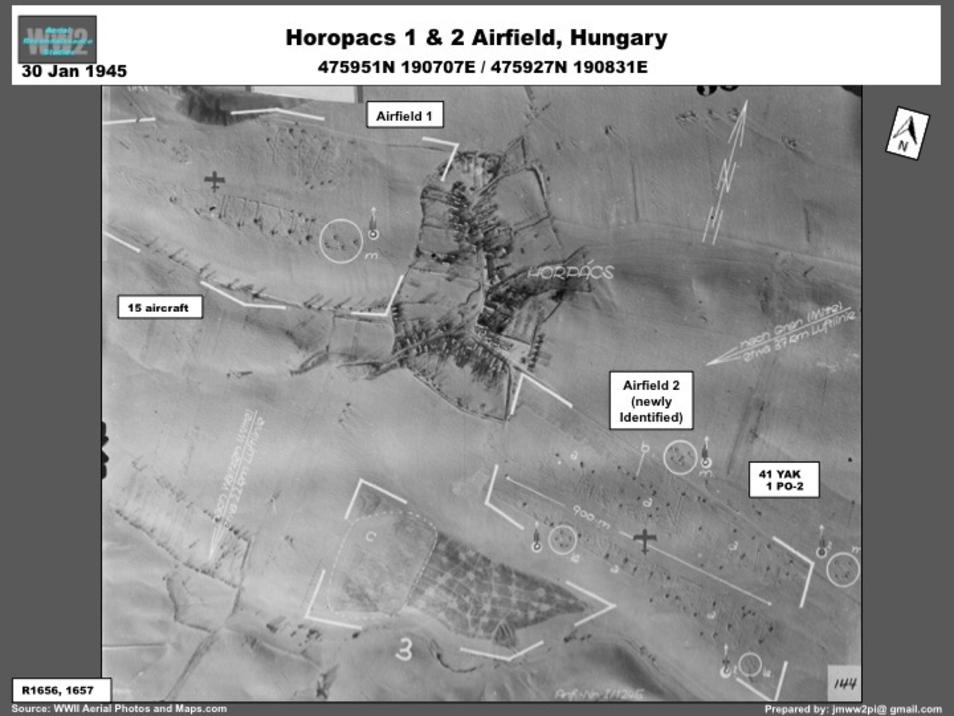 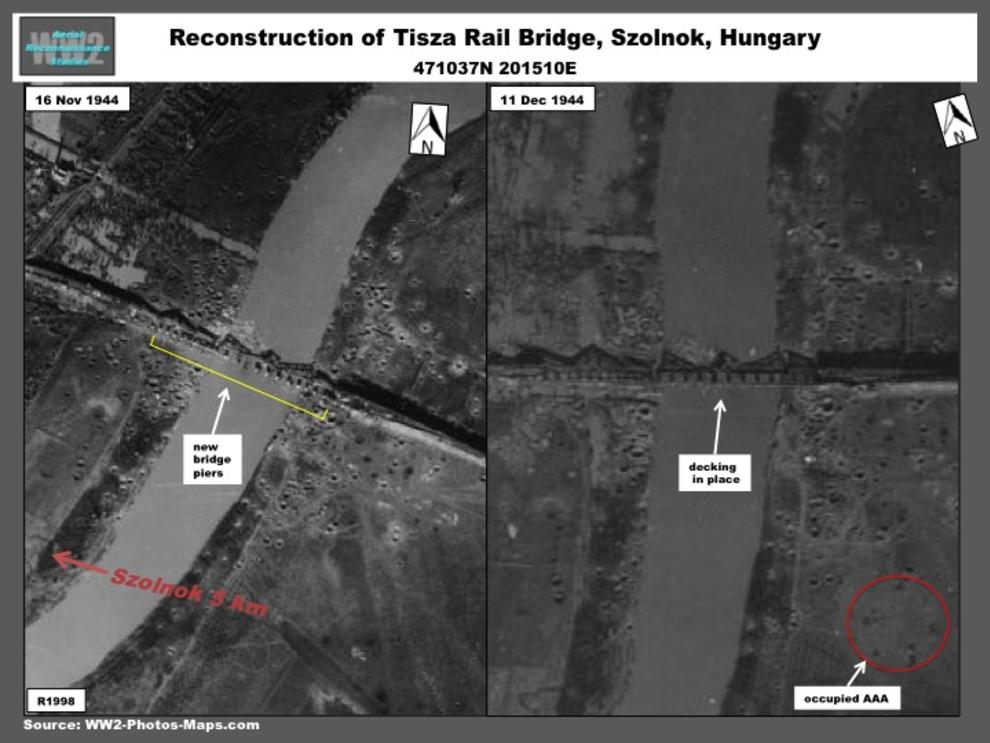 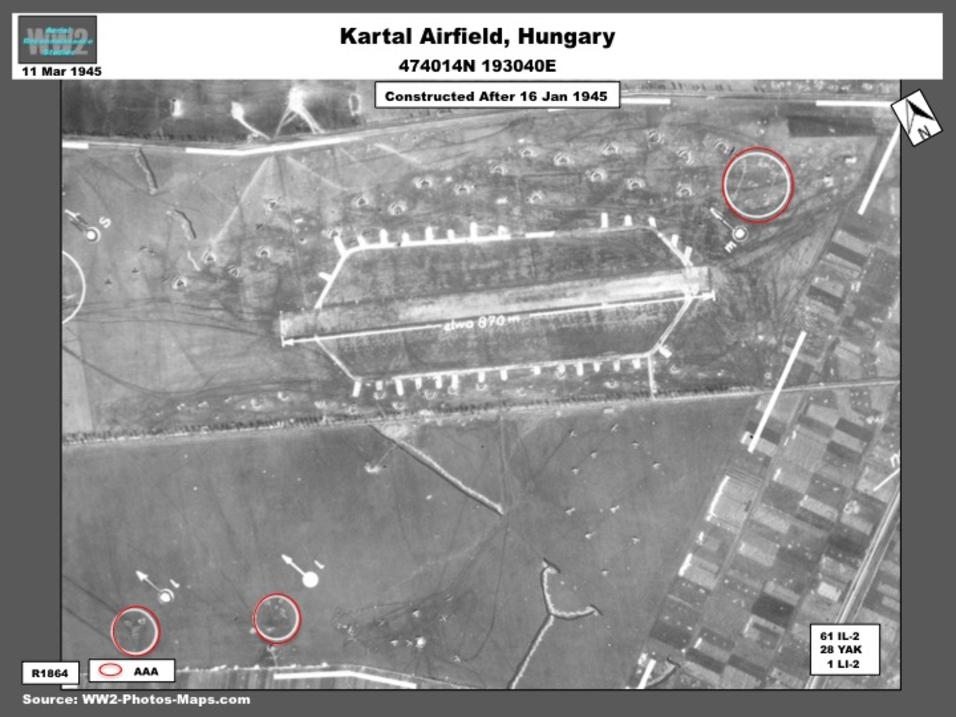 Other bases in use near Budapest in February and March included Budapest Ferihegy (46 IL-2, 41 YAK), Mayasfold (44 IL-2) , and Kartal (61 YAK, 28 IL-2) Airfields (Graphics 7 - 9).  Ferihegy is still the city’s main airport.  The runway at Matyasfold had been cratered by the departing Germans and a nearby aircraft factory was destroyed.  Kartal, an improved strip complete with taxiways and dispersal areas was constructed between 16 January and 11 March.

In preparation for the push into Slovakia, two sets of tactical airfields were constructed near Balassagyarmat, 60 km north of Budapest.  On 30 January both airfields at Horopacs  (Graphic 10) were occupied by a total of 41 YAK and 16 other aircraft.  Sixteen YAK were at Szugyzi 1 on 11 March.  When it was first identified on 9 March there were eight PO-2 at Szugyzi 2 (Graphic 11); the presence of a possible tent and deployment of an AAA site nearby suggests this may have been a command or reconnaissance post.  Only three PO-2 remained there on 11 March.

By December 1944, the Soviet Air force was operating close to Budapest.  On 21 January 86 YAK fighters were deployed at Erdotarcsa, where a 1000-meter runway had been improved and evidence of heavy flight operations could be seen in the snow (Graphic 6).  Evidence of flight operations could also be seen at Dunakeszi, 14 km northeast of Budapest  (Graphic 7), where 34 YAK were operating from two improvised fields in an equestrian complex. The fields were still in use on 11 March when 79 YAK and 14 IL-2 were present. 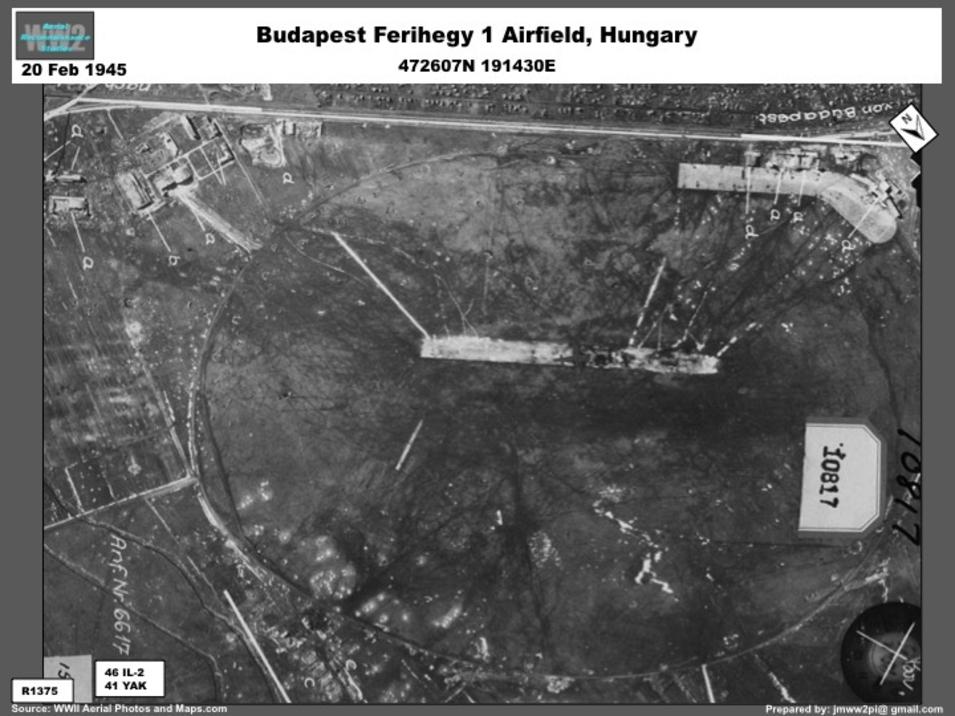 On 16 November one of the river crossing sites at Arokto--140 km east-northeast of Budapest-- included a Bailey-type bridge, a pontoon bridge, and a ferry crossing; vehicles were on the road (Graphic 1).  The crossing was well defended by six occupied anti-aircraft sites.  Eighty-five kilometers to southwest, a rail bridge on the Tisza near the city of Szolnok was under repair on 16 November (Graphic 2).  The city’s rail yards had been destroyed by the USAAF 8th Air Force on the last mission of the shuttle bombing campaign (FRANTIC 7) on 19 September 1944 (Graphic 3) 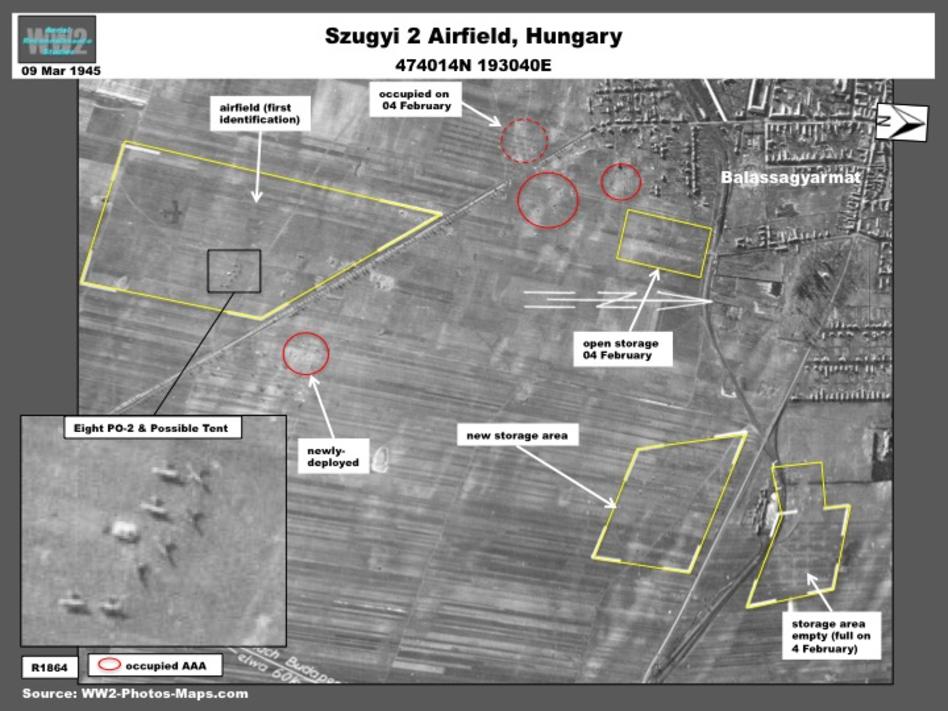 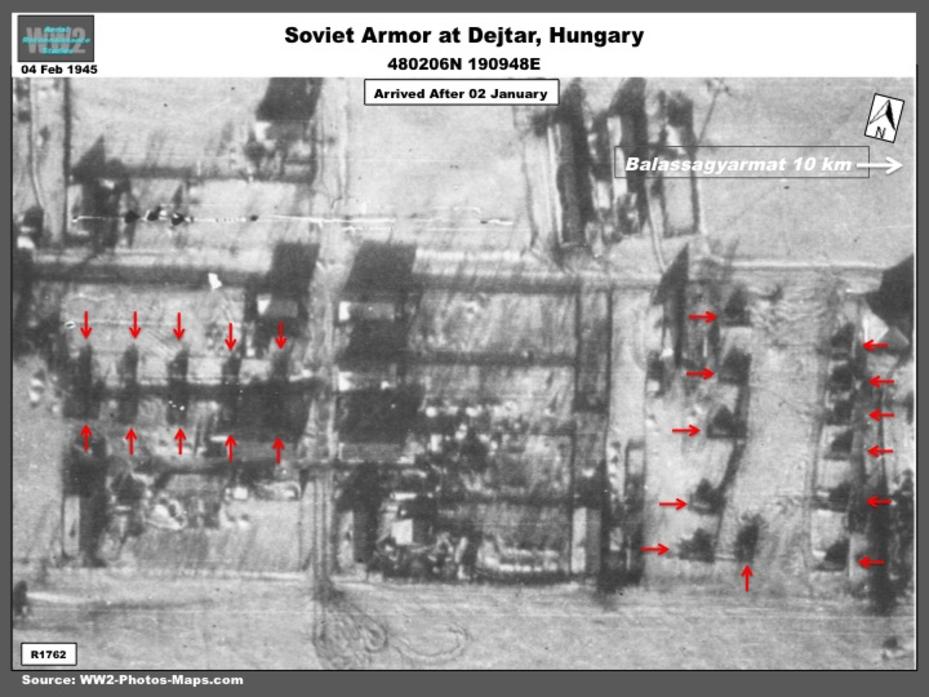 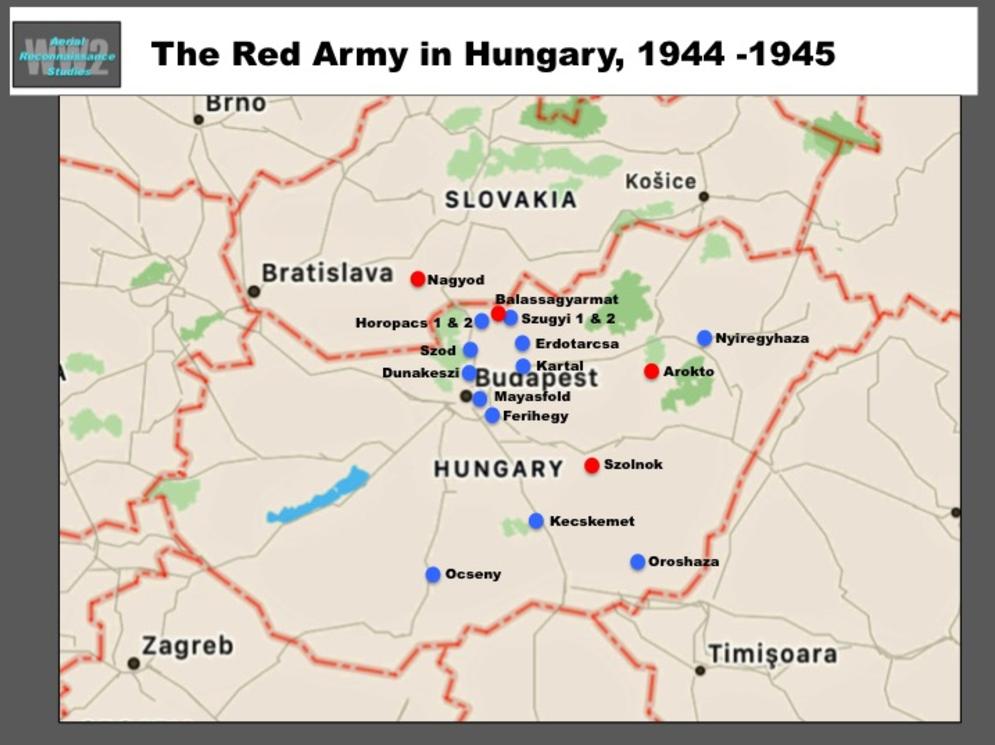 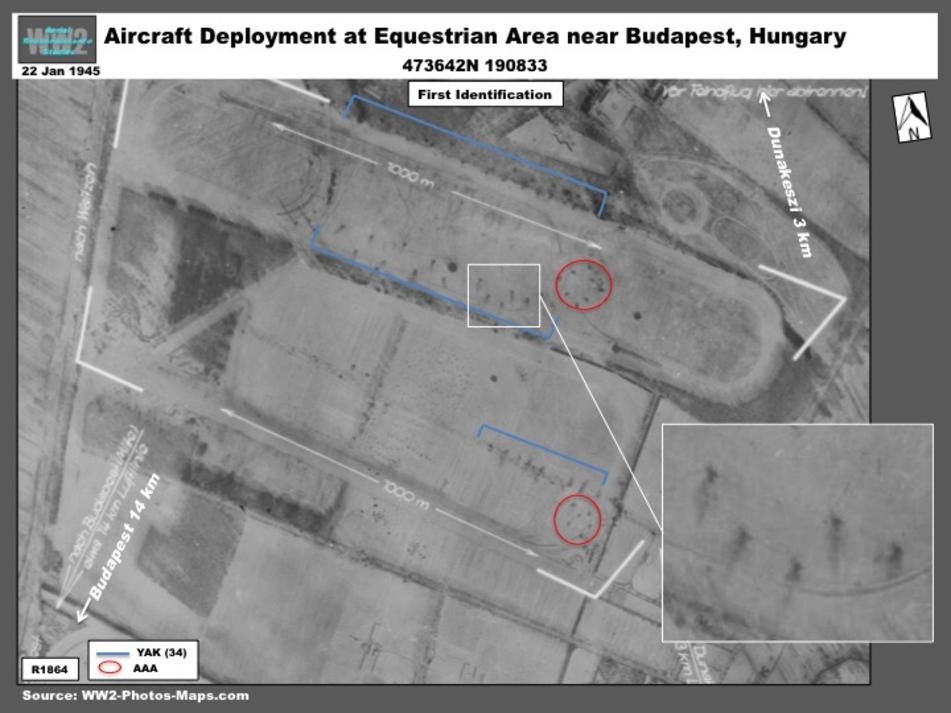