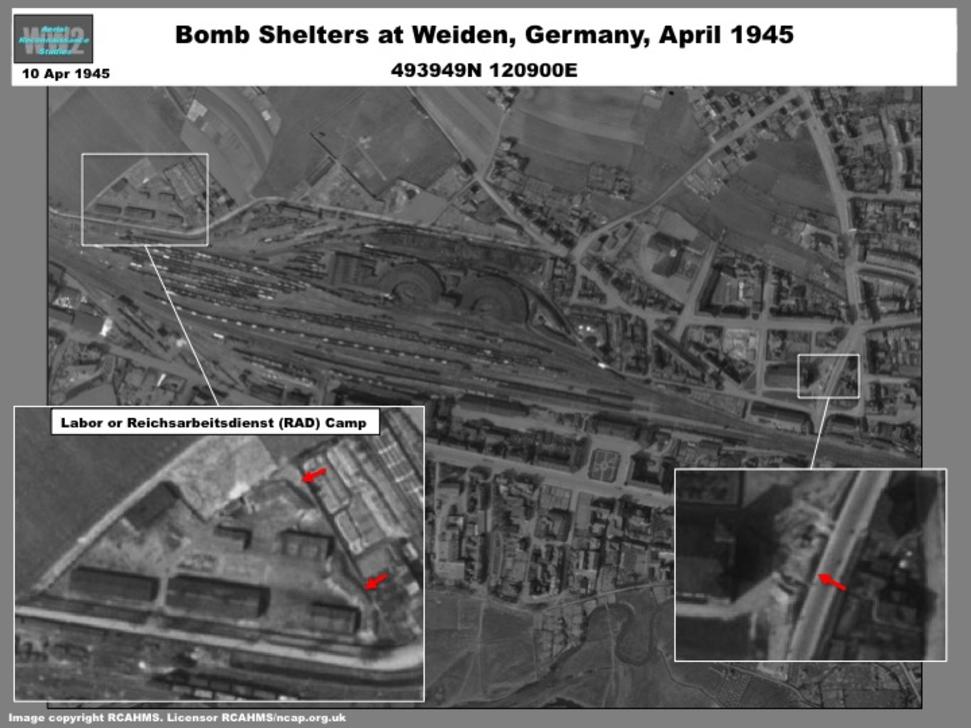 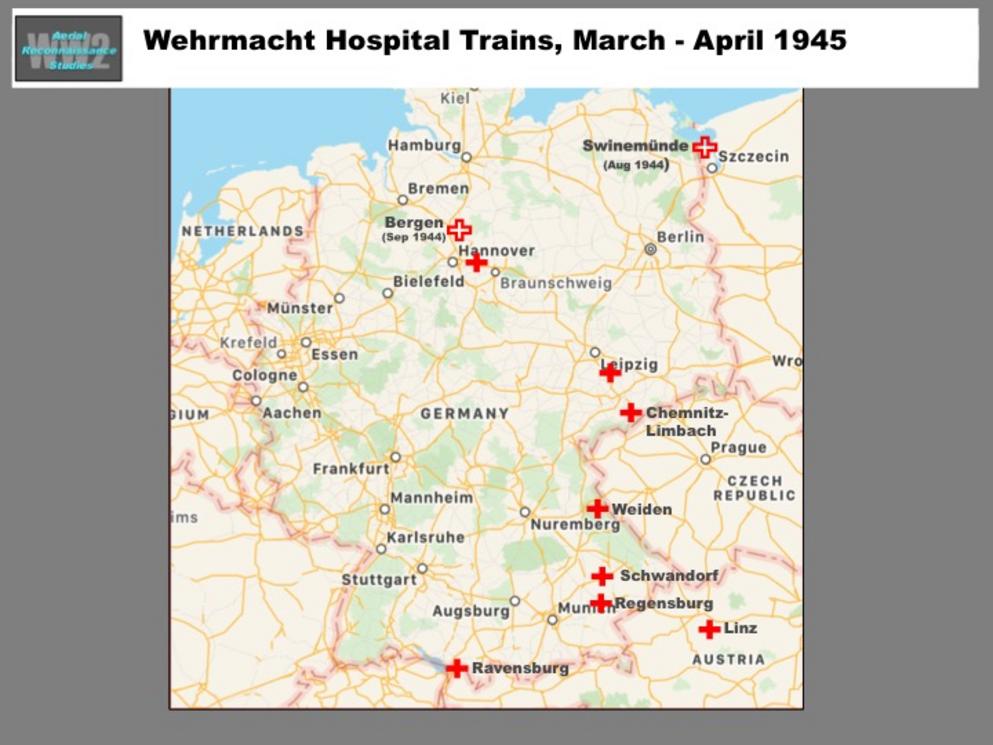 The town of Weiden remained unscathed on 10 April except for evidence of a recent attack on a canal south of town.  However,  bomb shelters had been constructed near a church and inside a labor camp or Reichsarbeitsdienst (RAD) barracks supporting the railyards (Graphic 3).  Personnel trenching could be seen at other areas of the town and in nearby STALAG XIII-B and an adjacent Wehrmacht barracks (not shown).​​

​​​As Germany neared collapse in early April 1945 elements of Wehrmacht hospital trains (Lazarettzüge) were concentrated at seven locations southeastern Germany and northern Austria.  In northern Germany, one train was identified at the town of Lehrte on 21 March. The trains, composed of E-30 hospital cars, were significantly smaller than the standard Wehrmacht complement of  37 cars (according to Lexikon der Wehrmacht).  On 10 April, a hospital train at Weiden was composed of 19 cars plus six medical boxcars (employed later in the war) in a separate section (Graphics 1 & 2); 11 other probably out-of-service cars were in the Weiden rail maintenance area with a large number of rolling stock.  To the south, an eight-car train was at the station at Schwandorf, a 13-car train was arriving Regensburg from the south and a 21-car train was at Ravensburg station.  A day earlier, a 19-car train was in the Leipzig-Paunsdorf classification yard and two separate trains composed of 9 and 10 cars were at the station at Chemnitz-Limbach.  Locomotives were affixed to trains at Weiden, Regensburg, Schwandorf, and Chemnitz-Limbach.  The train at Ravensburg was likely Lazarettezug 662, which according to Lexikon der Wehrmacht, arrived from Tübingen on 7 April and received damage from an air attack on the 10th.

Most of the towns were served by permanent hospitals and a number of temporary facilities --all identified by red crosses on roofs (Graphic 1).  The temporary hospitals were often housed in schools.  Of the six locations, Regensburg --with a large central hospital and six temporary facilities-- held the largest concentration of hospitals. 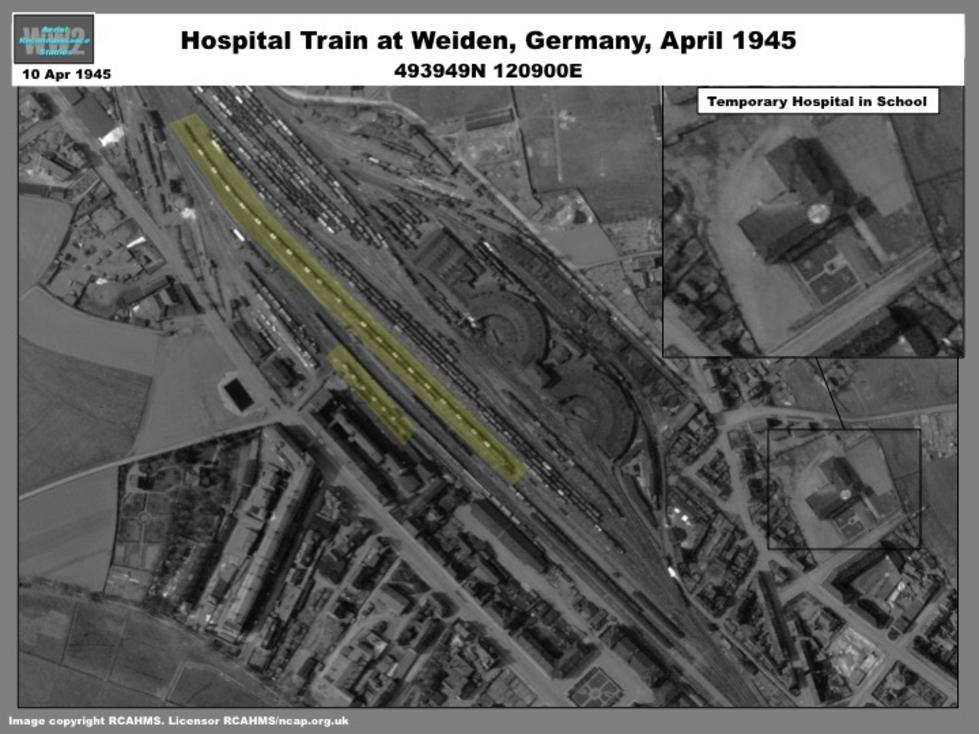 Hospital trains were identified in other areas in late 1944, showing where casualties were being transferred.  Other cities included Königsberg (not shown on map), Swinemünde, (7 & 13 August) and Belsen (6 September).

In Austria, a total of 45 hospital cars were in the main rail yard at Linz, Austria on 1 April 1945 (Graphic 4). The cars were divided into four sets, with only one (15 cars) that appeared to have an engine attached.  As at Weiden, some of the cars were at a maintenance facility.  It may also be worthy of note that the hospital cars were in virtually the same positions two weeks before, on 15 March. 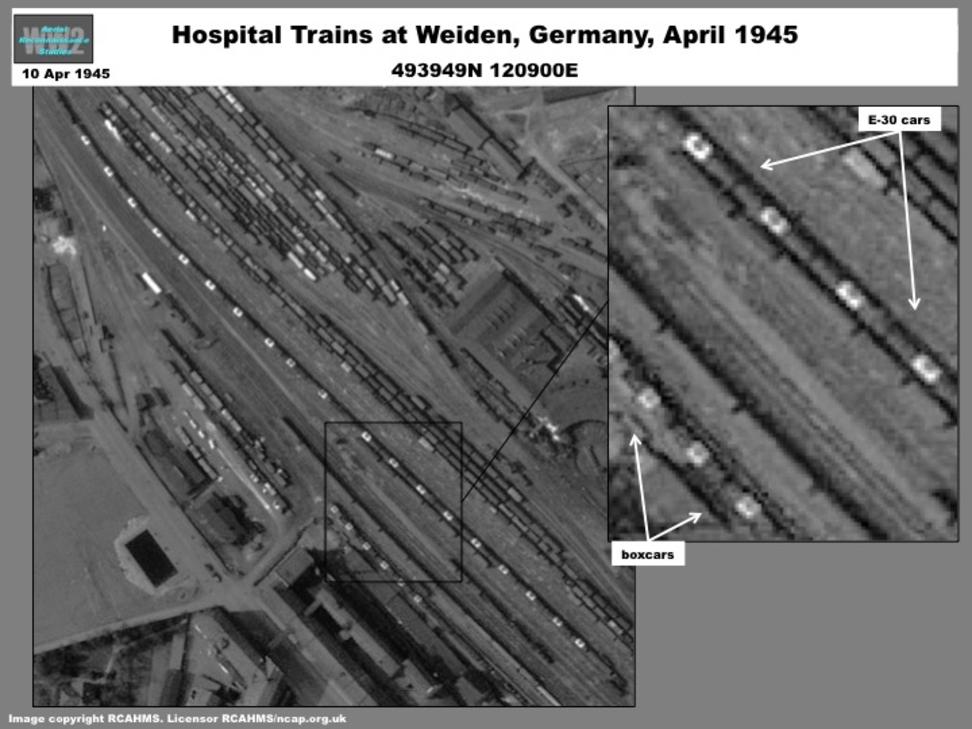 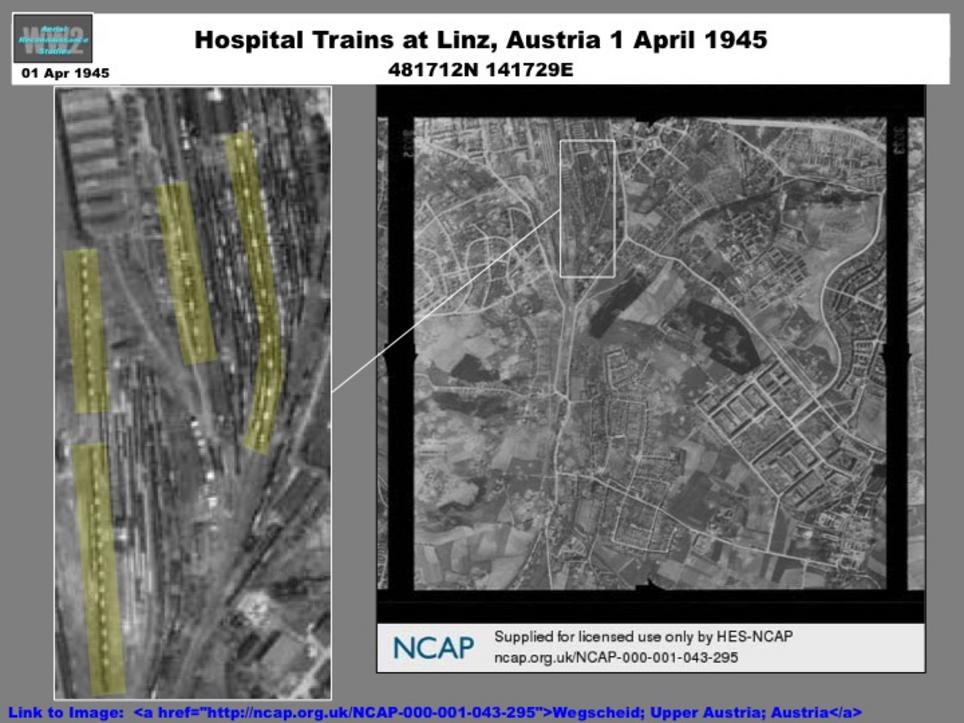