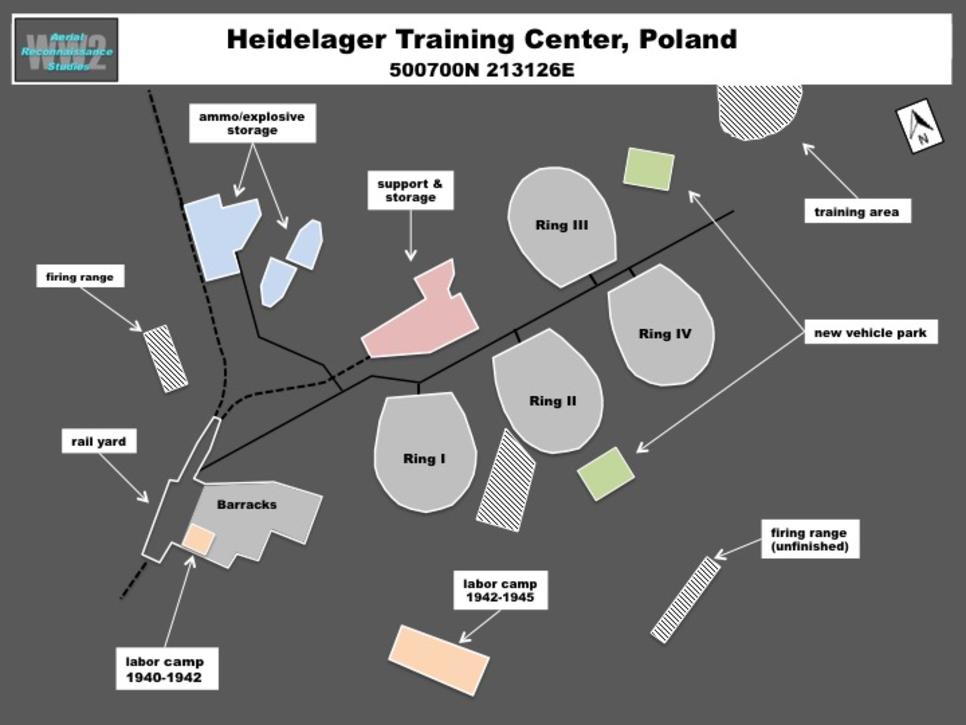 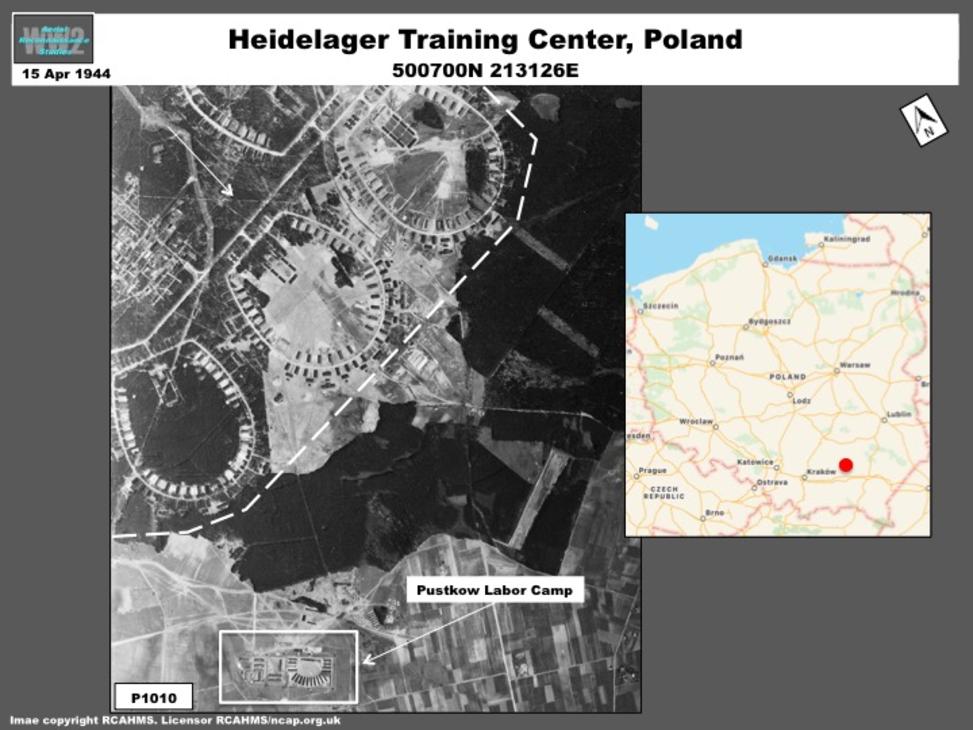 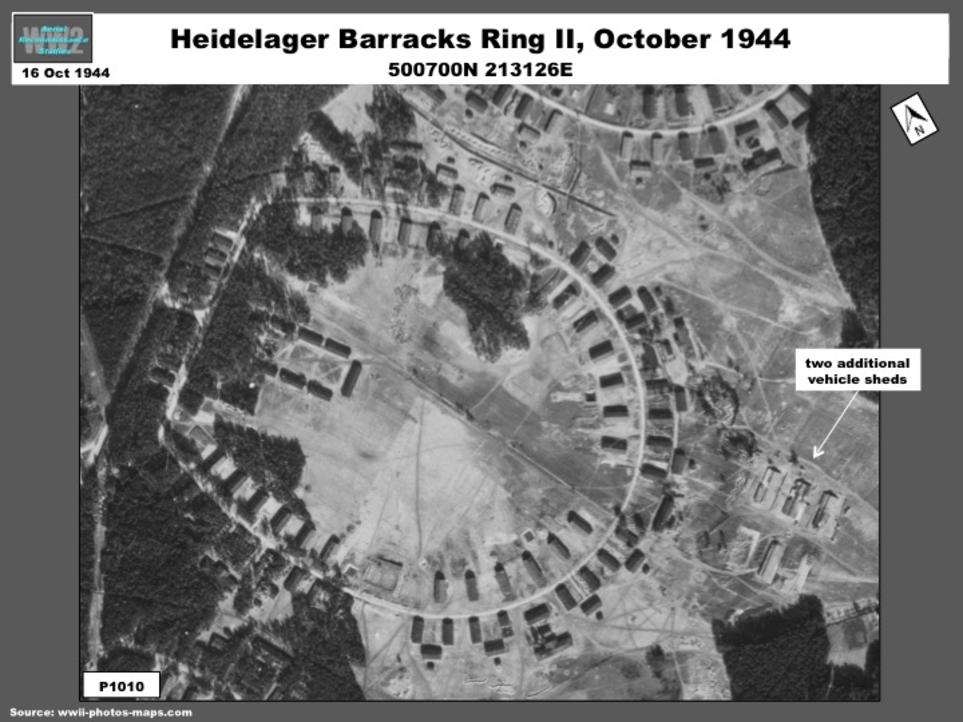 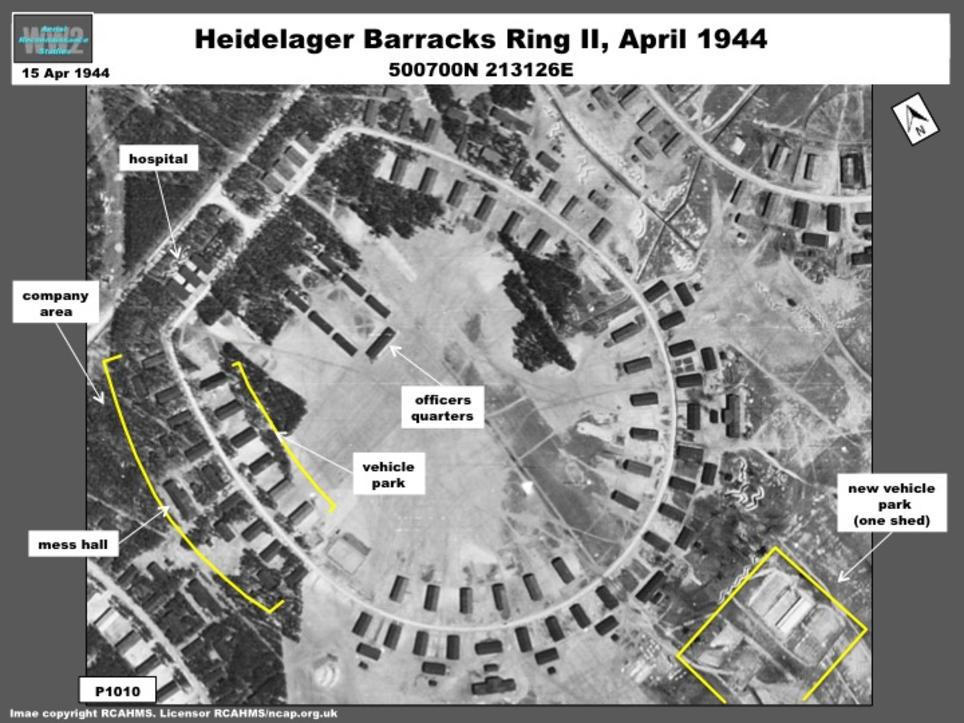 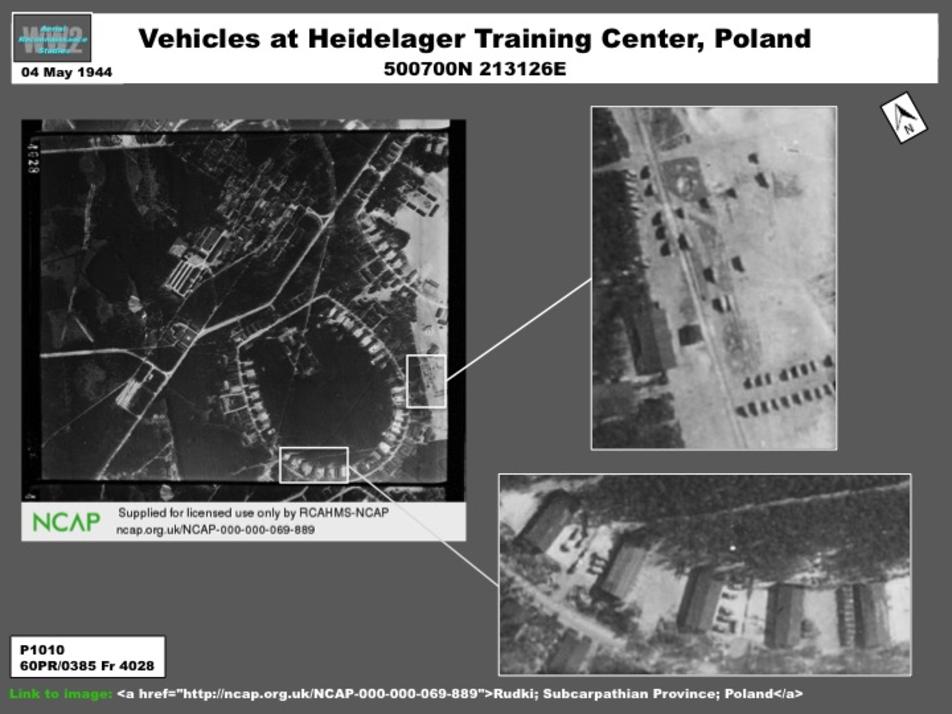 The SS ordered construction of a military training center near Debica, Poland in 1939.  The center, known as SS-Truppenübungsplatz Heidelager, became operational in October 1941 and until mid-1944 it would be used to train foreign Waffen SS units like the Ukrainian 14th SS Grenadier Division (1st Galician) and the Estonian Legion.  Heidelager was also known for the nearby Pustkow Labor Camp where at least 15,000 people died between 1940 and 1944 (see separate article).

Heidelager was designed around barracks areas situated within four ring roads ( Rings I - IV).  Eventually the center would be composed of a fifth barracks area (the location of the original labor camp), a rail yard, a storage/support area, an ammunition /explosives storage area, firing ranges and training areas (Graphics 1 & 2).

Heidelager was imaged by the Royal Air Force in April and May 1944 and was covered the Luftwaffe the following October after the center had been abandoned intact.  On 15 April each of the four barracks rings contained four company-size areas, each composed of 12 barracks, a mess hall and group of six vehicle sheds. Other features included a central officer's barracks area and support buildings that included a small hospital (Graphic 3).  Various construction projects continued through at least mid-1944.  Of these the most significant was the addition of two vehicle parks with six sheds indicating a planned increase in armor or motorized unit training.  The sheds in the park near Ring III had been completed by 15 April, but only one in the other park had been finished.  By 16 October, three more sheds had been added to the park near Ring II.  (Graphic 4).  Neither park was ever occupied.  Other projects included construction of a possible fuel storage area near the support area on 4 May (not shown).

There was virtually no activity taking place in the the training center on 15 April; however, by 4 May vehicles were observed in several areas indicating training was in progress (Graphic 5).  At least 25 vehicles were in the training area near Ring II.  In the barracks, 40 vehicles were outside sheds in two company areas of Ring 1 and 15 others were in one company areas of Ring III.   Small numbers of vehicles could be seen on near the rail yard, in the support area and on roads.  Rolling stock, including flatcars, was in the rail yard on both 15 April and 4 May.​