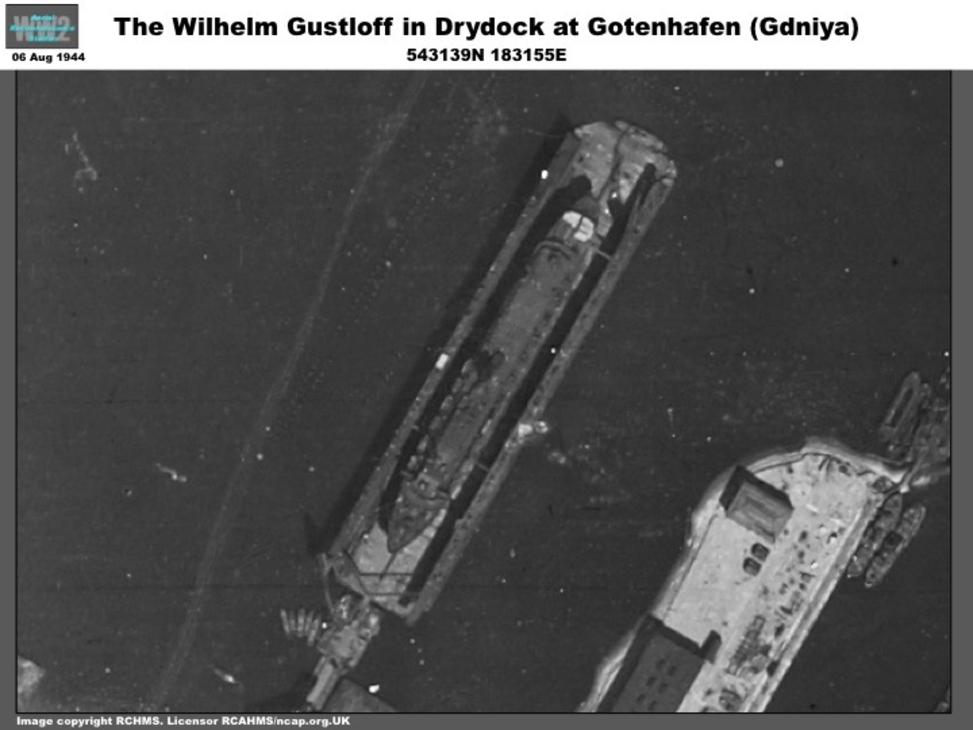 The German seaport of Gotenhafen --now Gdniya, Poland-- was a major shipyard and navy base.  In early 1945, Gotenhafen supported Operation Hannibal, the evacuation of German citizens from East Prussia ahead of the advancing Soviet Army.  Among the ships and boats pressed into service from Gotenhafen were the former cruise ships Wilhelm Gustloff, Cap Arcona, Antonio Delfino, Deutschland and the freighter Goya, which were all sunk with great loss of life between January and May.  The sinking of the Wilhelm Gustloff on 30 January 1945 remains the single greatest sea disaster in history, with more that 9000 lost on the overcrowded ship.

Gotenhafen was covered twice by RAF reconnaissance in August 1944 (map).  On 6 August the Wilhelm Gustloff could be seen in one of the port’s large floating dry docks, indicating it was being refurbished (Graphic 1).  Since 1941 the ship had served as a floating barracks for the 22nd U-Boat Training Flotilla at the Gotenhafen naval base.  By 23 August, the ship had arrived at a quay near the U-Boat school; another accomodation ship, possibly the Hansa  (previously the Albert Ballin) remained at an adjacent quay. The Cap Arcona, along with the possible Steuben and Deutschland and freighter Goya were docked elsewhere in port.

A number of surface combatants were in port at Gotenhafen; these included: the Battlecruiser Gneisenau (Graphic 2), the cruiser Admiral Hipper, two light cruisers, Köln (Graphic 3) and Emden and two pre-dreadnought battleships, Schlesien and Schleswig-Holstein (Graphic 3). Two 1936A destroyers were at the naval base (Graphic 4).  Gneisenau was brought to Gotenhafen for repair after suffering heavy damage to her bow in February 1942 and her turrets were removed for use elsewhere.  By 1943 the ship remained in disrepair, with her bow and gun turrets removed.  Between 6 and 23 August either Schlesien or Schleswig-Holstein had replaced the Gustloff in the floating dry dock.  About 15 submarines were at the port on 6 August; four were at the naval base and the rest were in the shipyard.

Several facilities were identifiable in the vicinity of the port (map). The headquarters of the 22nd U-Boat Training Flotilla was located in the naval base near the quays where the Gustloff and possible Hansa were docked on 23 August.  The headquarters and main school facilities were probably housed in the adjacent former Maritime Academy, but a large number of temporary buildings in the area along the quays were probably associated with the school.  A subcamp of the Stutthof concentration camp was south of the port; the camp had at least 10 barracks, but a separate possible area with an associated barracks was located nearby. 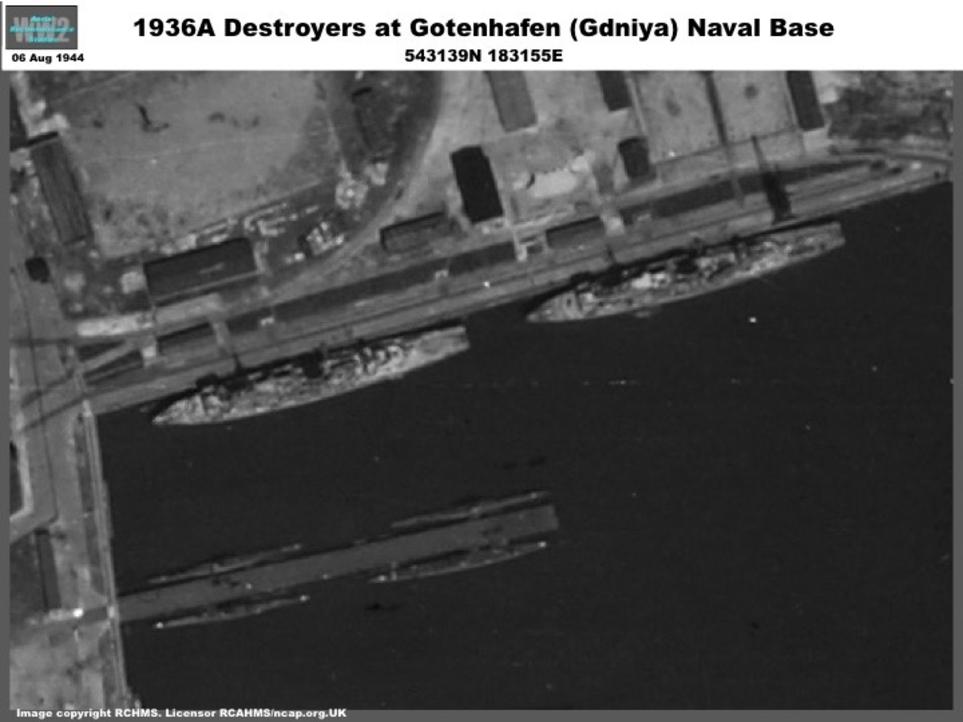 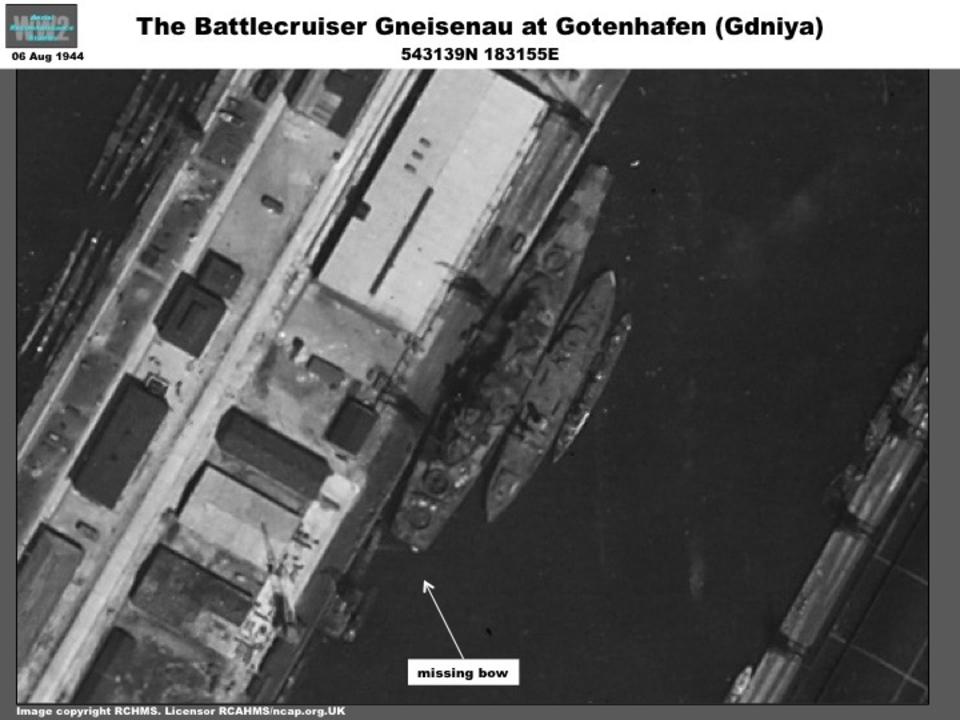 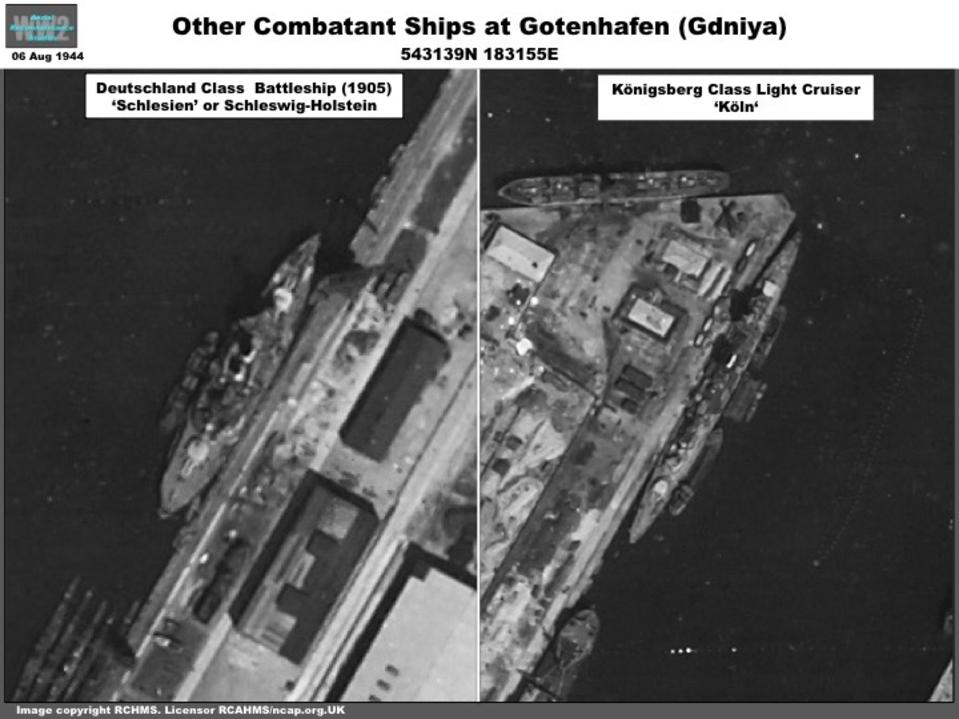 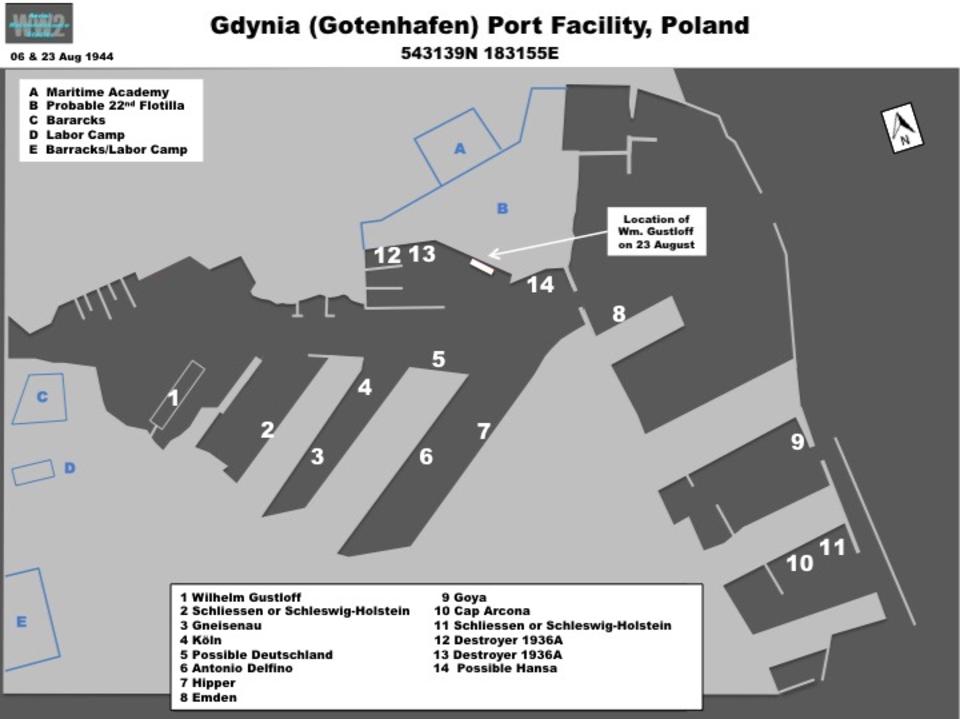