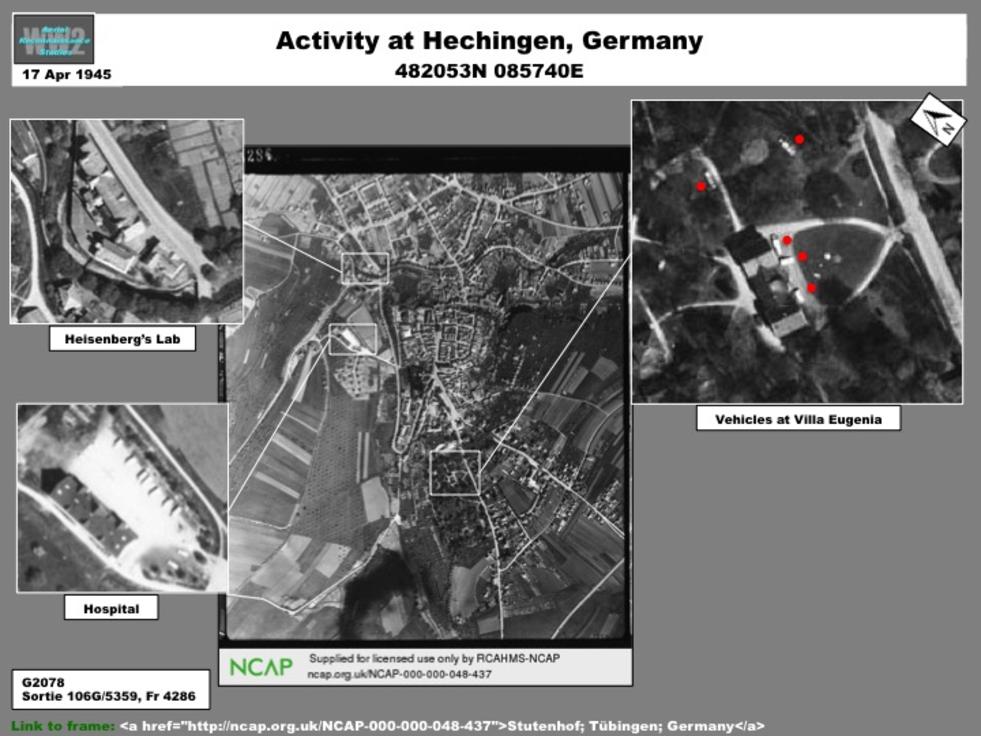 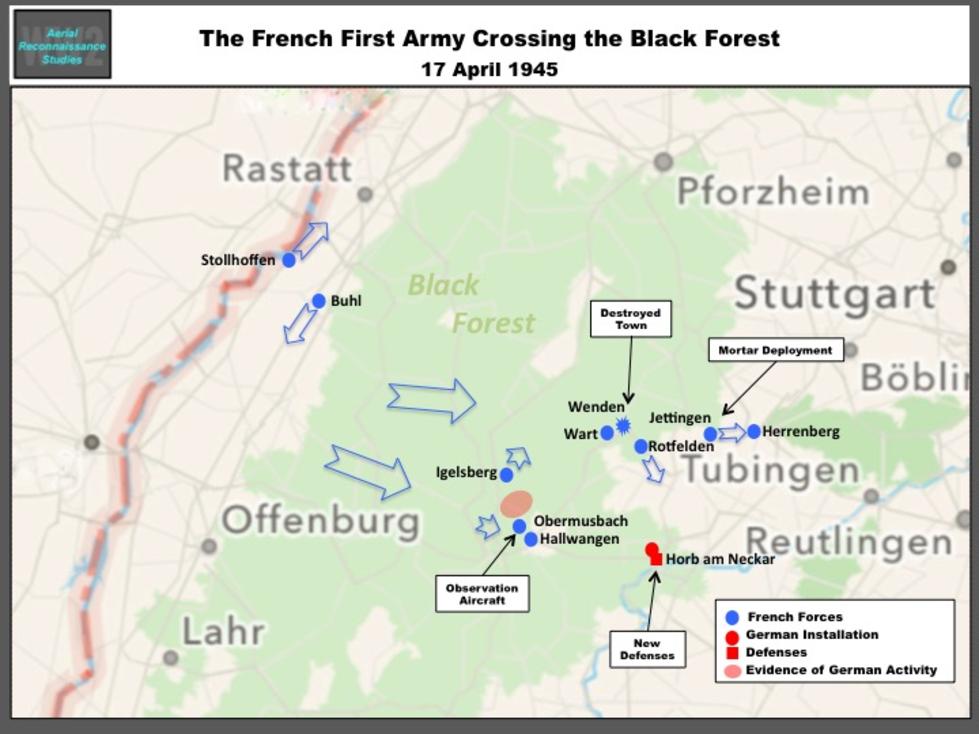 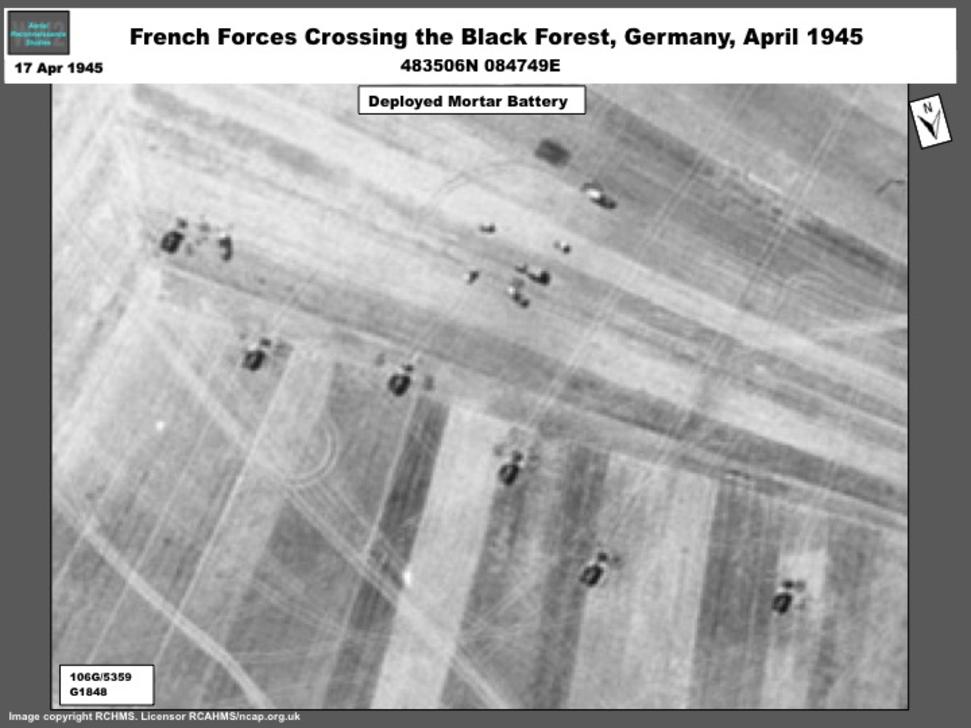 The French First Army crossed the Rhine River on 31 March 1945, with the dual objectives of taking Stuttgart and driving southeast to the Austrian border.  A 17 April RAF reconnaissance sortie (106G/5359) captured the Army's progress through the Black Forest.  French units had advanced as far as Herrenberg, 45 km southwest of Stuttgart and to the southeast had arrived at the village of Hallwangen on the way to Horb-am-Neckar.  Vehicle concentrations and convoys could seen be at several locations in towns and along roads to the west to the Rhine (map and list).  A mortar battery using possible M28 tracked vehicles was deployed at Jettingen covered the advance into Herrenberg as a convoy passed by (Graphics).  Horb, with a possible Hitler Youth barracks and recently constructed defenses, was entered on the 20th.  Two French light observation aircraft, likely being used for route reconnaissance, were parked at a barn near Obermusbach.  In the rear, along the Rhine, convoys were traveling north and south near the towns of Stollhoffen and Buhl, respectively.  Except for the defenses at Horb, only a few sites along the routes showed signs of resistance or a German military presence.  The town center of Wenden had been destroyed.  A small amount of defensive trenching was observed in Hallwangen and heavy vehicle trackage north of Obermusbach may have been made by German equipment.

At Hechingen (not shown on map), 23 km southeast of Horb, artistic and historical artifacts were hastily being removed from the Villa Eugenia, a Hohenzolleren residence where five large trucks were parked.  A number of other trucks were parked in front of a probable school being used as a hospital.  In 1944, the Nazi atomic scientist Werner Heisenberg relocated his laboratory to a woolen mill in Hechingen before constructing his test reactor in nearby Haigerloch.  Heisenberg left the town shortly after this image was taken, just ahead of soldiers of the the U.S. Alsos Mission seeking to capture him and his reactor. 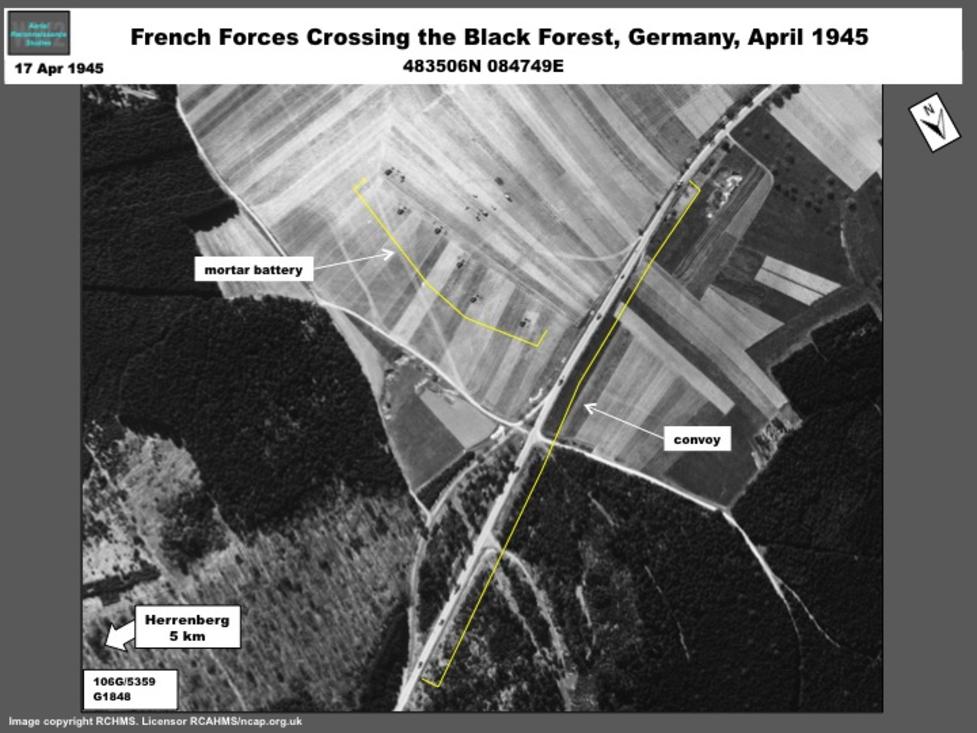