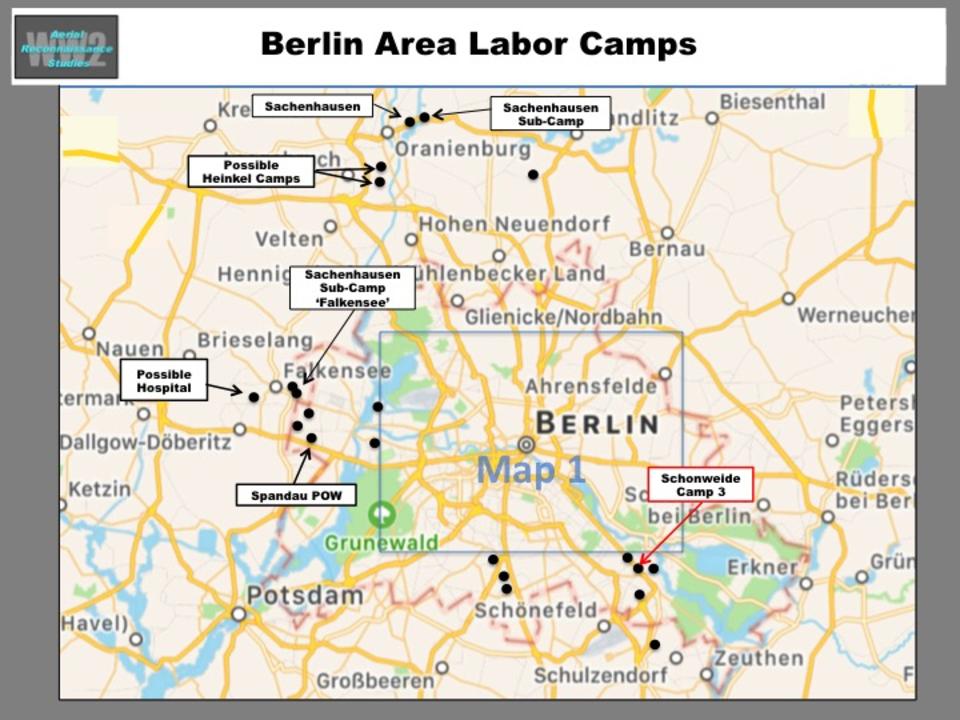 ​​One of the larger Berlin labor camps was located in the southeast suburb of Schöneweide, where a smaller camp is preserved as a memorial to the Nazi forced labor system.  Schöneweide Camp 3 occupied an area between a classification yard and a rail factory or maintenance building (Graphics).  Physical differences between the sections suggested they may have been occupied by different classifications of workers.  The neat, well cared for northern section with 12 larger than normal wooden barracks and kitchen suggesting it housed more privileged workers.  A separately secured and more unkempt section to the south contained at 30 smaller barracks, a kitchen, and 14 other buildings.  A similar --probably recently constructed-- section with about 15 buildings was in a triangular area south of the main camp.  Personnel trenches had been constructed in the northern and southernmost area.  Two other possible labor camps were located in the vicinity: one, west of the classification yard, appeared to support an adjacent rail-served storage depot or nearby Johannisthal Airfield; the other, across the railroad tracks more closely resembled a Reichsarbeitsdienst or Hitler Youth barracks. 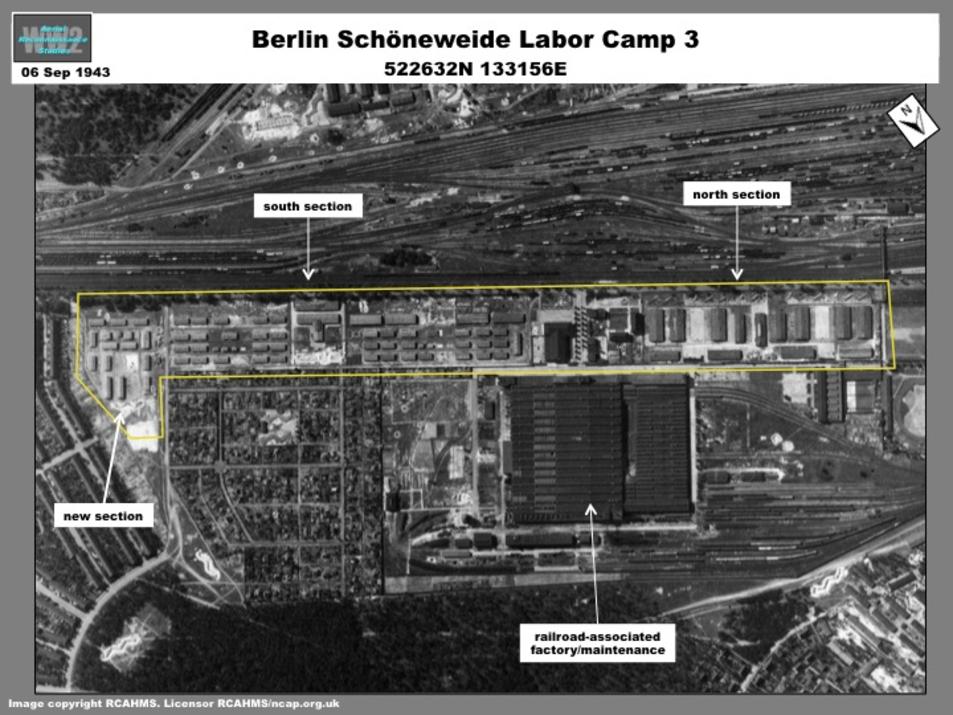 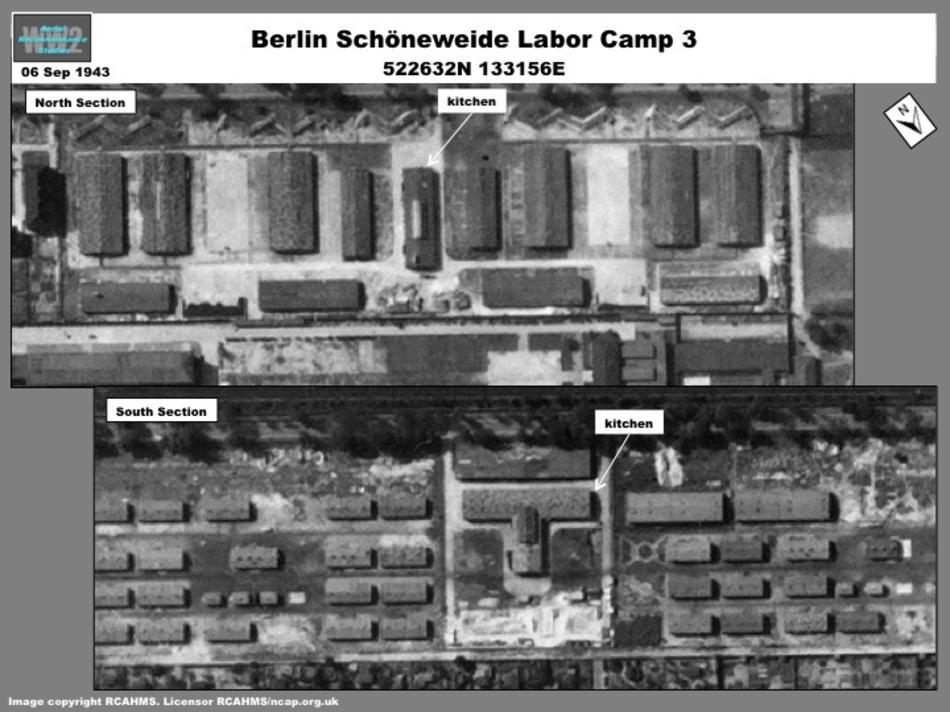 By 1943 the Third Reich’s economy had come to rely on a forced labor system that developed in the cities and countryside.  An extensive network of forced labor camps was populated by civilian slave laborers from Poland and the USSR (Zivlarbeiters and Ostarbeiters), military POWs, and a much smaller, relatively privileged group of “guest workers”.  This diverse group of prisoners --including some in concentration camp sub-camps -- lived near industries, construction sites, and in the countryside.

Although the labor camps were ubiquitous in cities across Nazi Germany, their location was not well documented and few survived to illustrate the scope of the forced labor system.  An analysis of 1943 reconnaissance imagery covering Berlin and Munich gives some idea of how the camps were distributed. The camps, most often constructed of wood and genearlly similar in appearance, varied in size, with as few as five and more than 30 buildings.  Owing to their central locations and possibly the categorization of residents, physical security was not as high as at concentration camps.  Although most of the labor camps were probably fence-secured only a few had guard towers or sub-divisions indicating a separation of workers.  By 1943 steps were being taken to protect some camp occupants; these included trenches and bomb shelter construction and sometimes, camouflage painting of roofs.

Berlin Labor Camps
Available aerial reconnaissance of Berlin between May 1943 and May 1944 provided nearly complete coverage of the city and its environs.  The 45 probable camps identified (Maps 1 & 2) include the Sachenhausen concentration camp at Oranienburg and subordinate sub-camps at Oranienburg, Siemenstadt (Siemens Co.), and Falkensee (ALKETT armor plant).  One or both of the camps identified near the Heinkel aircraft factory at Oranienburg Airfield (one dismantled) could have been Sachenhausen sub-camps.  With guard towers and double fencing, a facility near Spandau resembled a POW camp or another sub-camp.  An unusual labor-type camp in the Doberitz area could have been a prisoner hospital.  The rest of the camps --such as those in the Lichtenburg quarter that supported building construction-- could be identified by function but determination of camp occupants was nearly impossible.  An exception was the large and well documented ‘Weserflug” aircraft factory at Tempelhof airport, which employed Polish and Eastern workers. 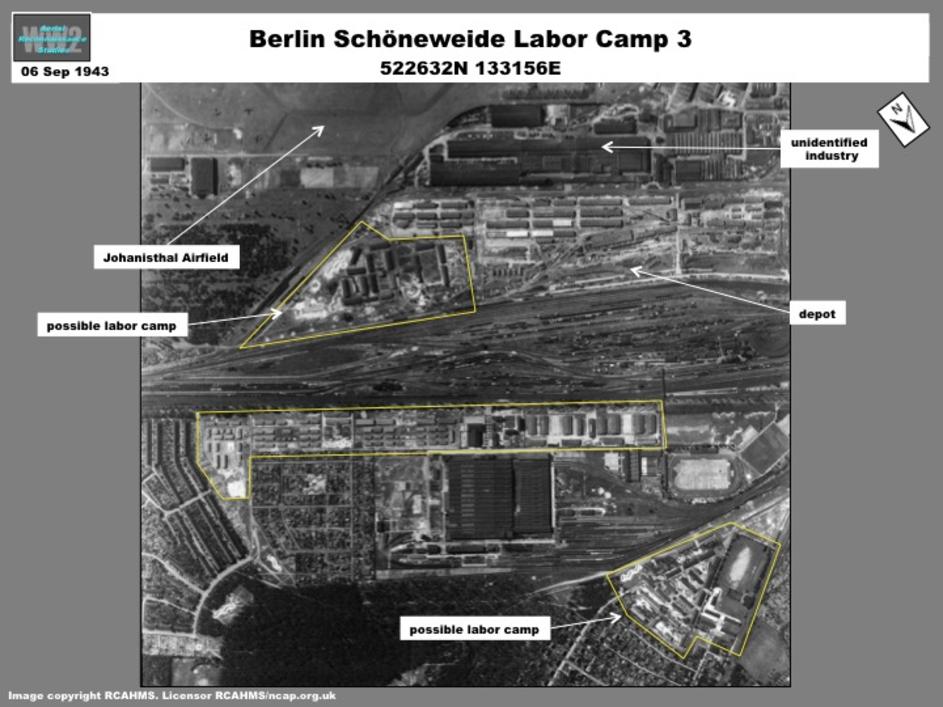 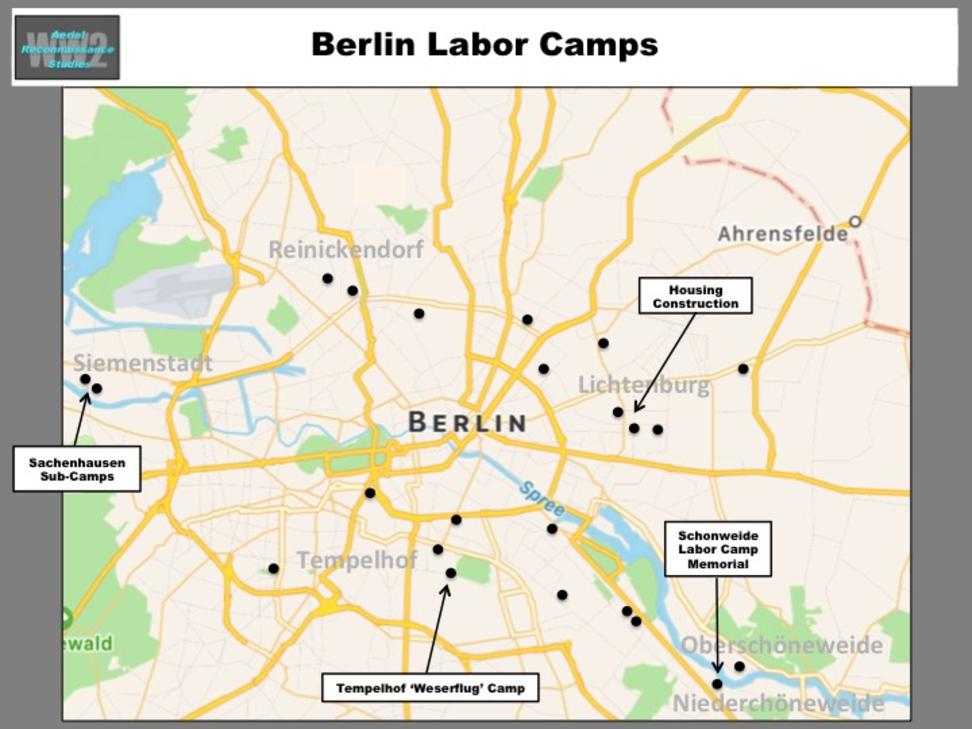 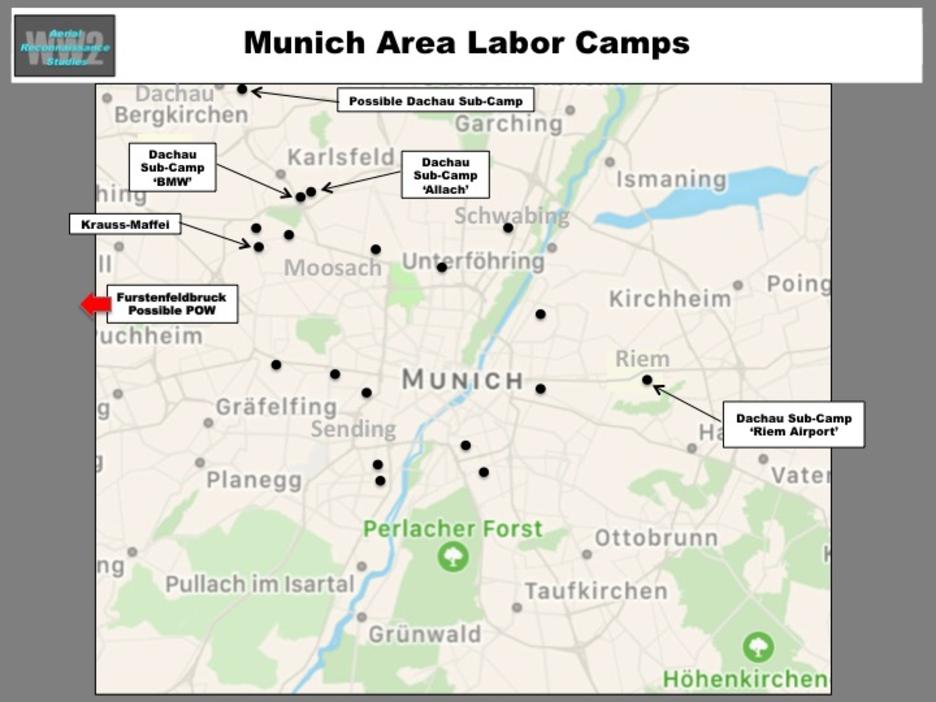 Eighteen labor camps were identified in Munich from imagery coverage between March 1943 and April 1945 (Map 3).  Compared to those in Berlin the Munich camps were often larger and appeared to have better security.  Three, including two near Karlsfeld/Moosach (Allach Porcelain and BMW/Messerschmitt) and one at Riem Airport were known sub-camps of nearby Dachau (not shown).   By location, a camp just southeast of Dachau belonged to the concentration camp, but the subordination of another at the Krauss-Maffei Factory (produced the SdKFz-7 half-track) is less clear.  Security was very evident at a camp near Furstenfeldbruck Airfield 21 km west-northwest of Munich, suggesting it was a POW camp.