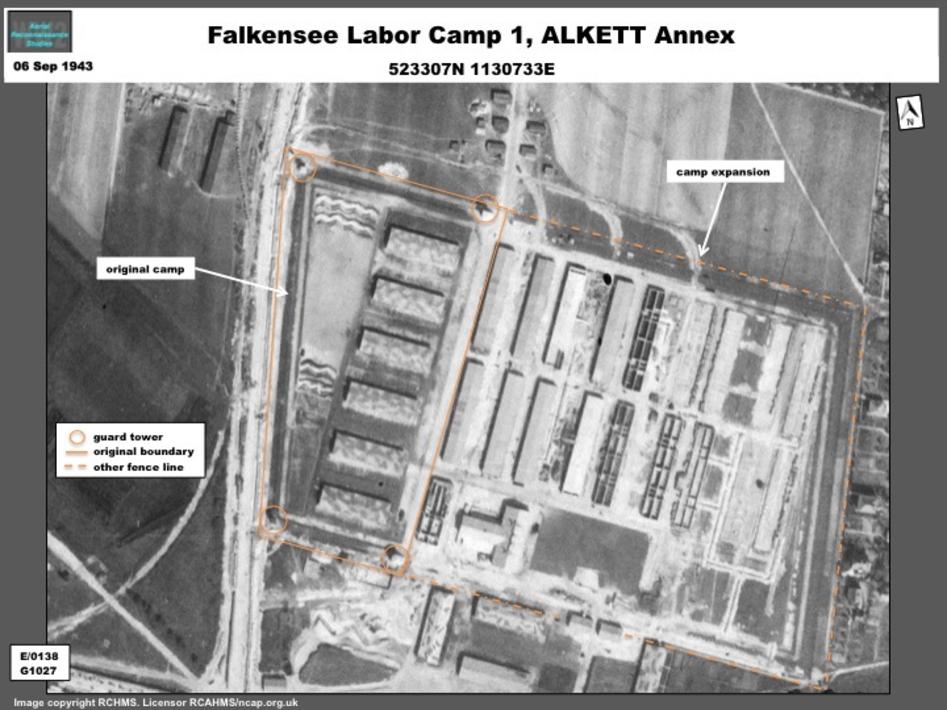 ​Two forced labor camps were identified at Falkensee, west of Berlin on 6 September 1943.  One of these, a subcamp of the Sachenhausen Concentration camp was being expanded and a large worker housing area --also possibly including a forced labor section-- was under construction. The new facilities supported a large arms plant belonging to ALKETT (Altmärkische Kettenwerke GmbH)* that was nearing completion nearby.  ALKETT, with other facilities in the Berlin area, was a major producer of armored vehicles for the Wehrmacht.

The main Sachenhausen subcamp (Camp 1, Graphic 2) was adjacent to the new plant and is now a memorial park.  According to available information the camp was built for rail repair workers in 1938, but a new section was added between January and October 1943.  The original camp had six barracks enclosed by two fences and four guard towers.  The new section contained eight finished masonry barracks (one survives as a memorial), 10 more in various stages of completion, a messhall and a support building (eight of the buildings were in an area that is now covered by a small lake).  The new  construction was enclosed by an existing fence, but there were no guard towers on its perimeter.  The camp was served by two entrances: one at the northwest side near one of the existing guard towers and another on the south side flanked by two access buildings and a guard barracks.

Another camp (Camp 2, Graphic 3) was 500 m to the northwest near a small lake, the Neue See, which originated as a sand extraction pit in the mid-1930s. Though entirely surrounded by security fences and six guard towers, the camp appeared to be separated into two sections: a typical labor camp with 11 barracks and assembly area and a small military-style installation with 13 barracks, a messhall, four support buildings and a possible bunker.

A much larger housing area (Graphic 4) was under construction north of Camp 1; it was composed of two sections each containing 15 single-story barracks or support buildings. Each area had an U-shaped structure with a large number of unidentified partially buried objects.  The entire area was being enclosed by a single fence and a single guard tower on the west perimeter. At least least six barracks in the western section were being enclosed by another fence, suggesting it was being prepared for forced laborers.

Buildings in the housing area and the new section of Camp 1 were served by water distribution networks.  The networks connected to an underground water main from the vicinity of the ALKETT plant powerplant.

*  some references indicate the plant belonged to DEMAG GmbH 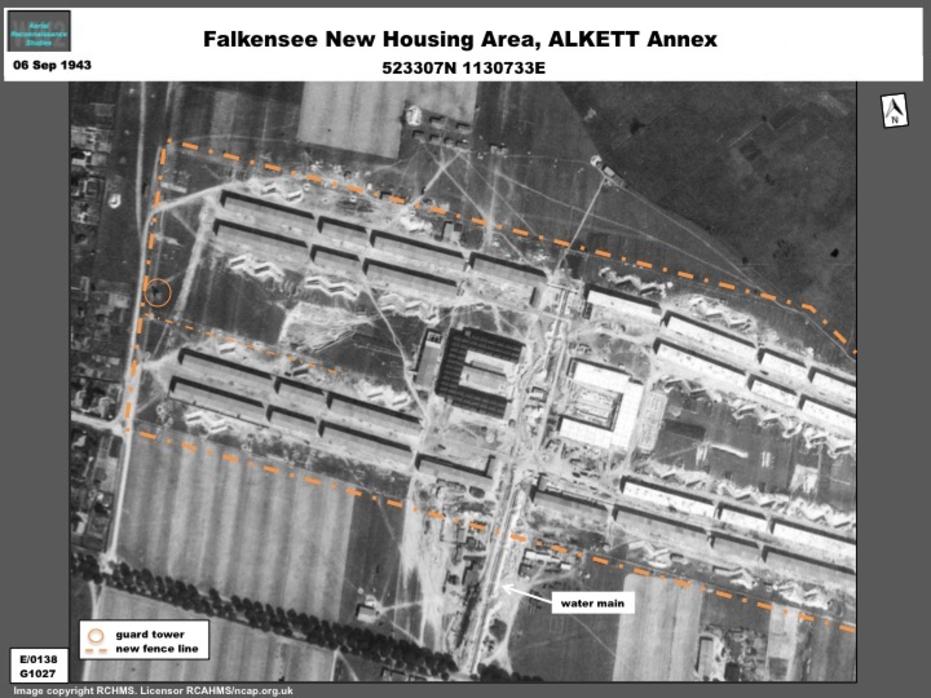 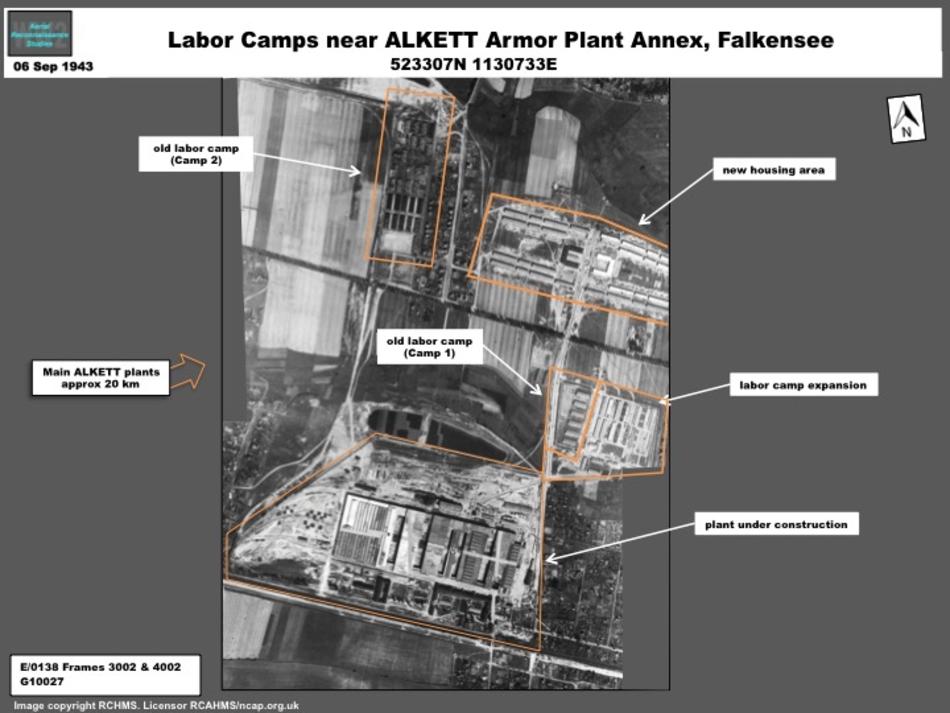 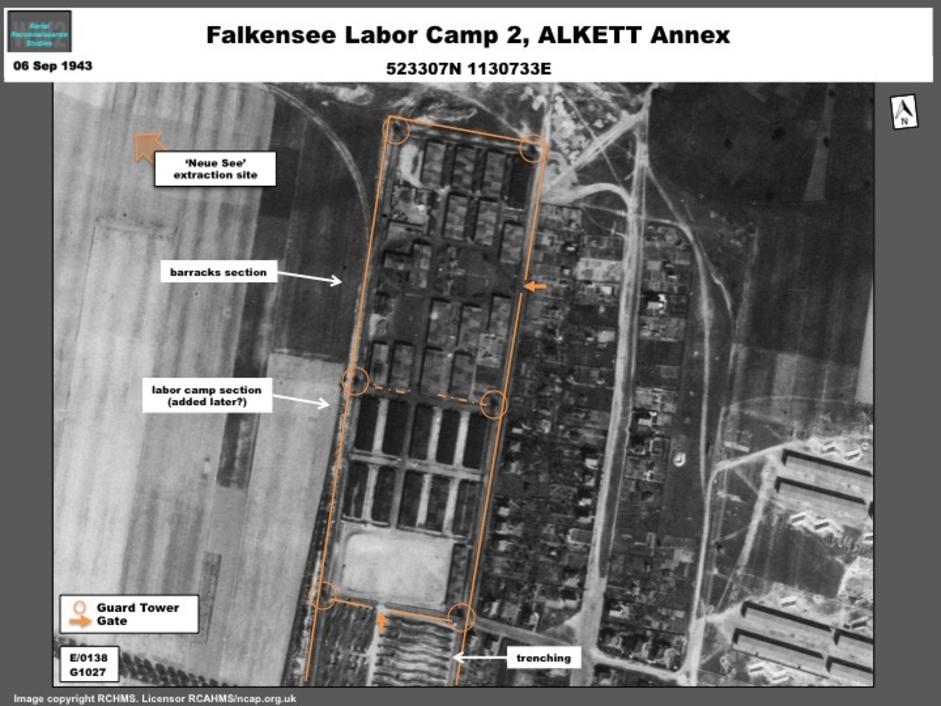