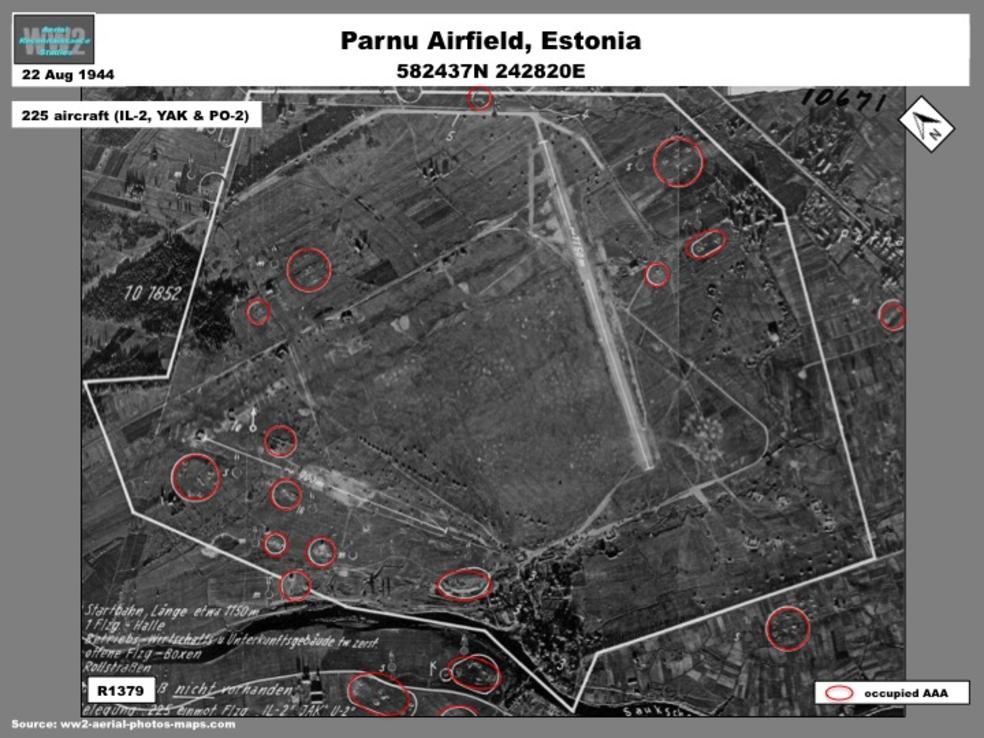 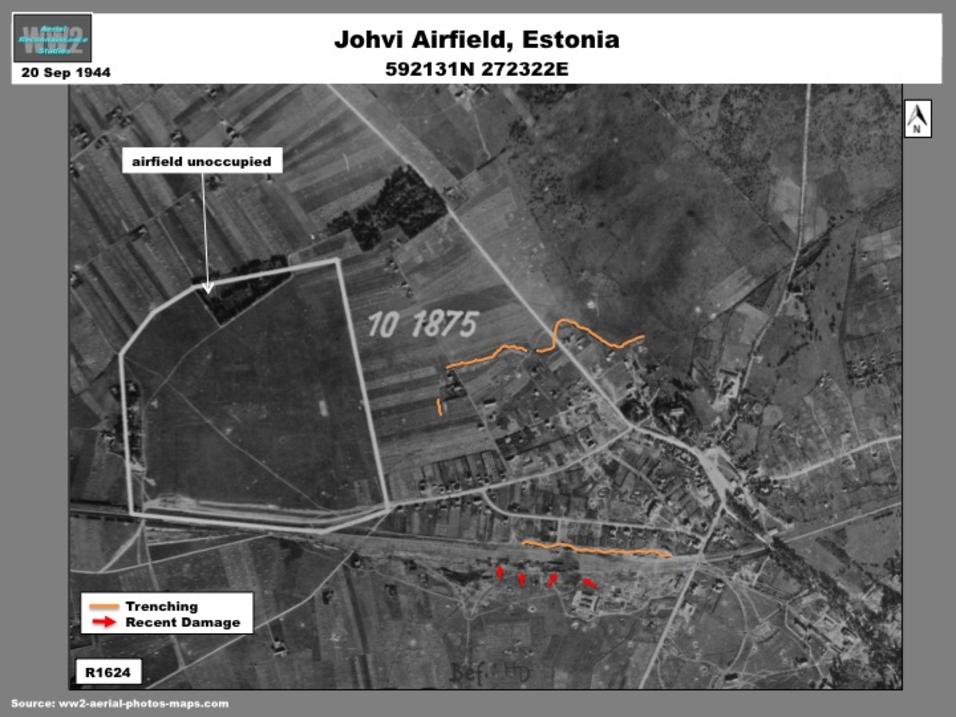 A relatively small number of images covering Estonia were available for analysis , but nevertheless showed evidence of the Soviet advance in the late summer and fall of 1944.  The town of Narva, which the Wehrmacht succssfully defended through mid-1944, finally fell to the Red Army on 26 July.  Luftwaffe coverage on 31 July and 9 August (composite mosaic, Graphic 1) showed the town shortly after its capture.  The town, railroad yard and major bridges had been destroyed but other smaller bridges had either survived or been rebuilt.  Narva airfield had been rendered unserviceable by trenching and showed evidence of bombing and artillery shelling.  Little or no activity including air defenses was discernible around the town. 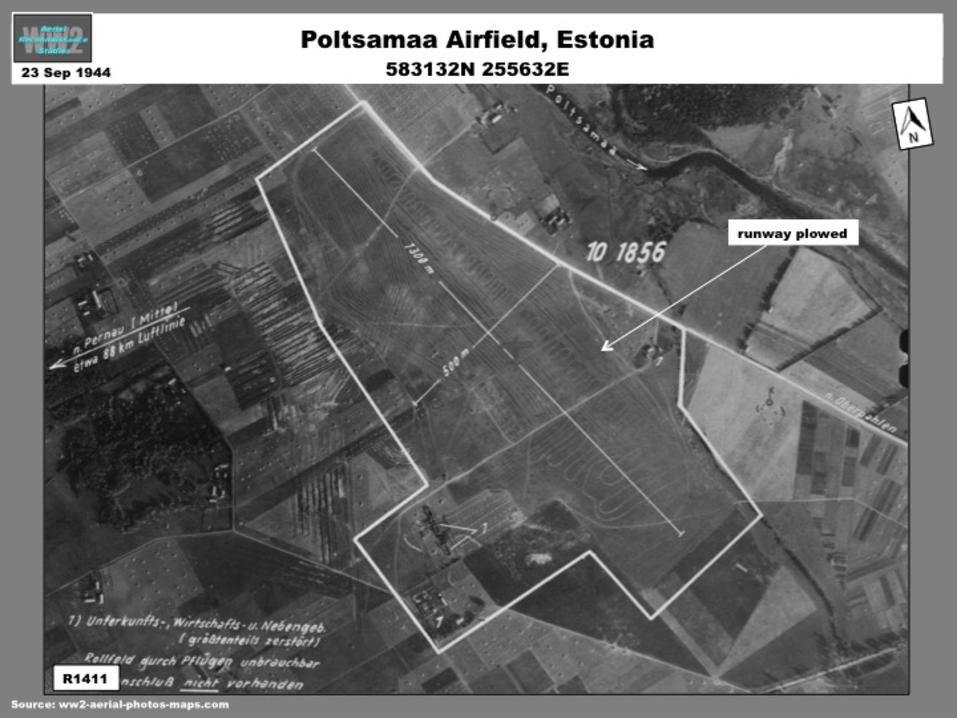 According to available information western Estonia remained in German hands until the Tallinn Offensive in mid-September 1944.  However, coverage of Parnu (Pernau)  on the Gulf of Riga revealed the Soviet Air Force was already using the nearby airfield by 22 August (Graphic 3), when 225 aircraft --a mixture of IL-2, YAK, and PO-2-- were deployed and defended by  more than 18 anti-aircraft artillery (AAA) sites.  The city  of Parnu was reportedly not taken until 23 September.

By mid-September, the Red Army had progressed through the town of Johvi, on the Tallinn-Narva rail line and 50 km west of Narva (Graphic 4).  Although abandoned German defenses were in evidence on 20 September, destruction in the town was not as complete as in Narva; the rail yard had sustained recent probable bomb damage damage.  The Wehrmacht had made no attempt to demolish Johvi Airfield, but by 23 September the landing area of the airfield at Poltsamaa (Oberphalen) Airfield had been plowed, rendering it at least temporarily inoperative (Graphic 5). Coverage of Rakvere Airfield on 21 October revealed the runway and landing areas had been systematically demolished (Graphic 6) 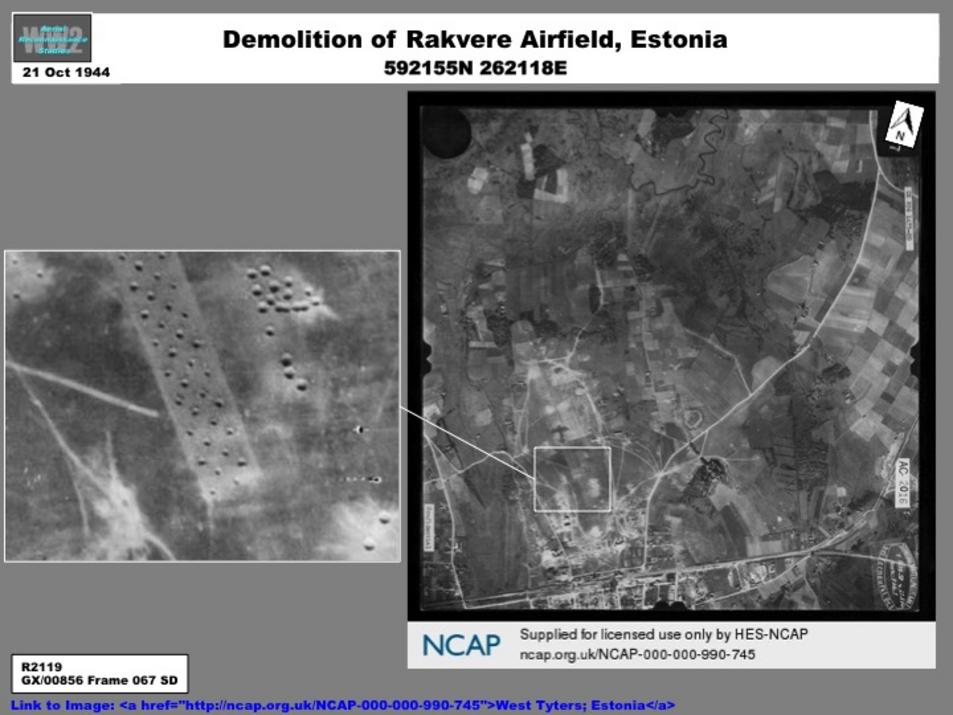 As was the case in other recently occupied areas (see articles on Lithuania, Poland and the USSR), the Soviets prepared small tactical airfields to support future operations or serve as decoys.  At least five airfields were identified for the first time between 22  August (Graphic 2) and 20 September.

The Red Army began an offensive against the Estonian offshore islands by late September 1944, landing on the largest island, Saaremaa on 5 October.  On 16 January 1945 there were 128 Soviet aircraft --YAK and possible Hurricane-- deployed at Monnuste Airfield on the southwest side of Saaremaa (Graphic 7).  Facilities at the Kihelkonna Seaplane Station on the northwest side of the island had been destroyed by 10 October. 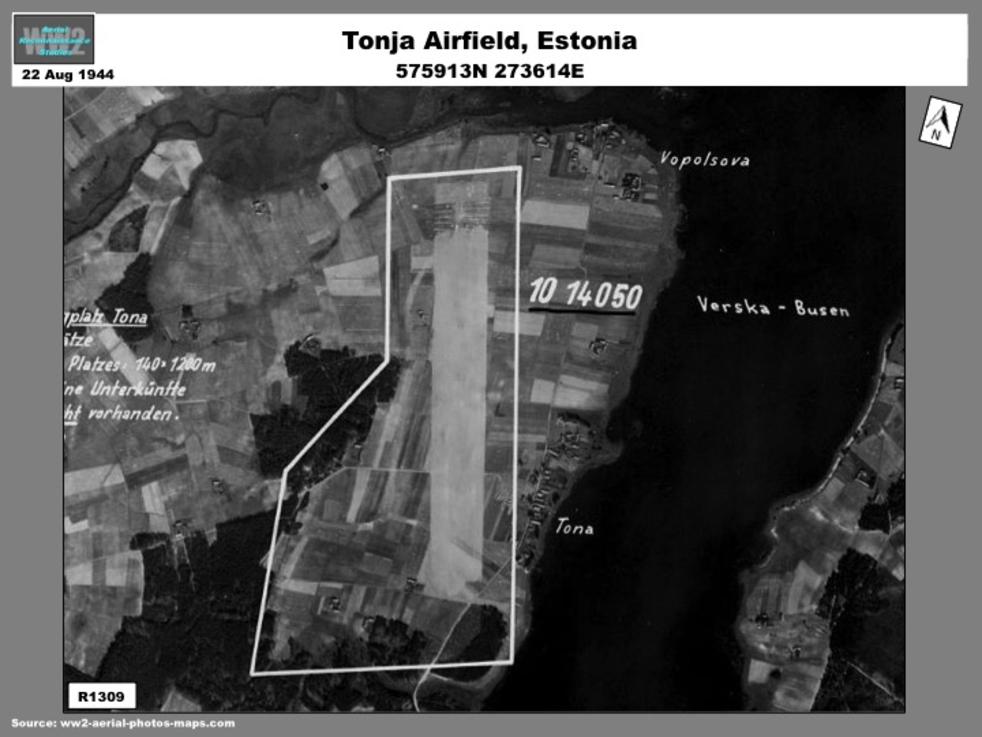 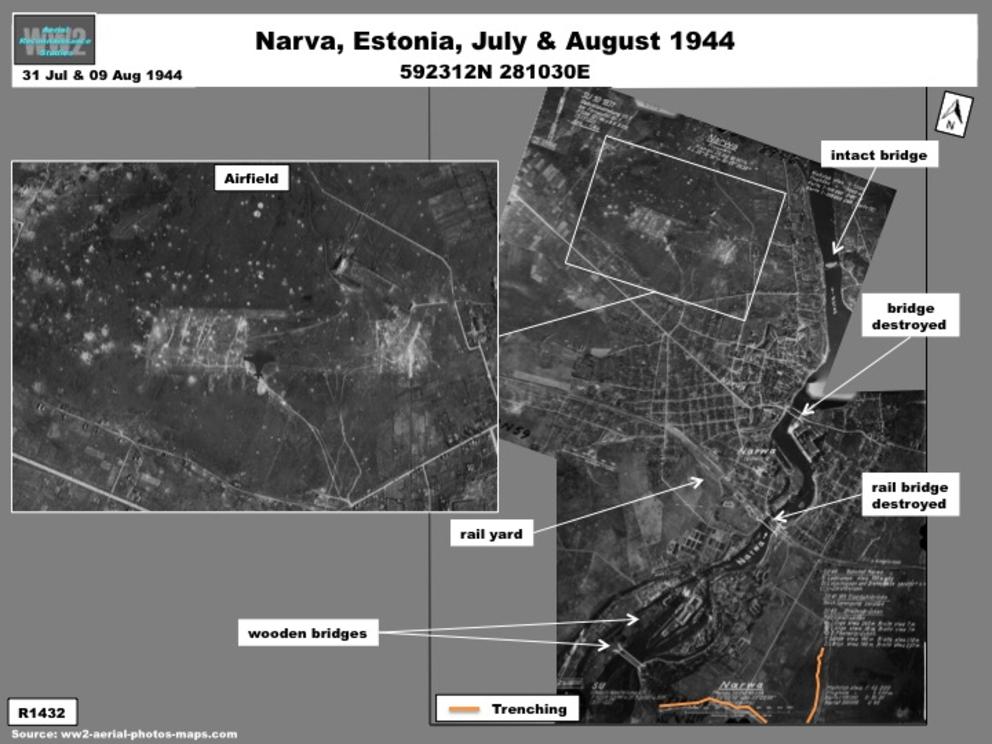 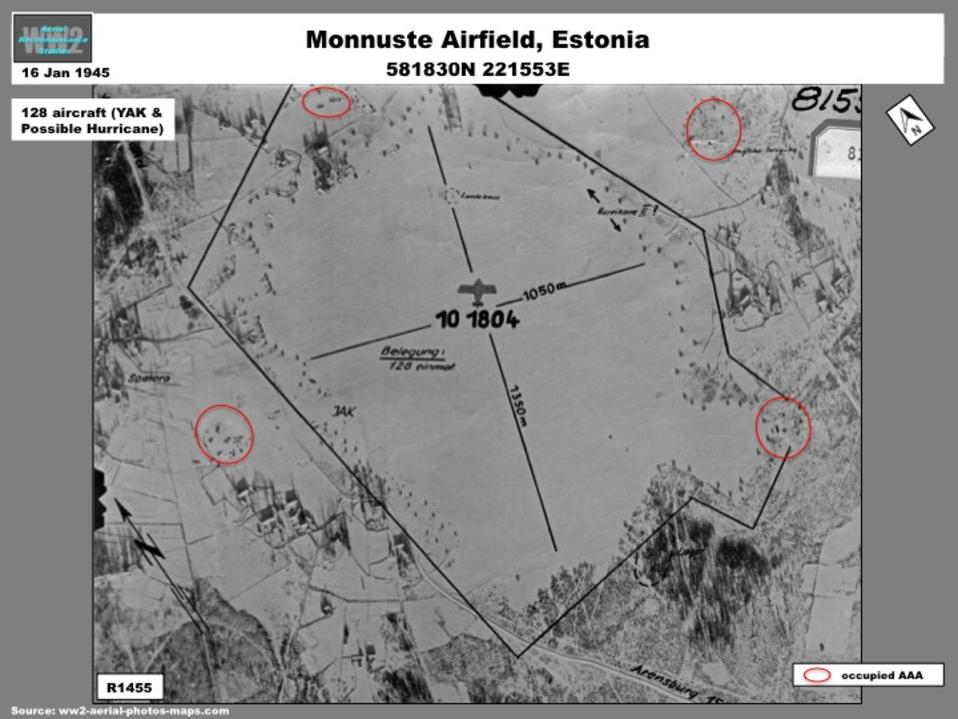 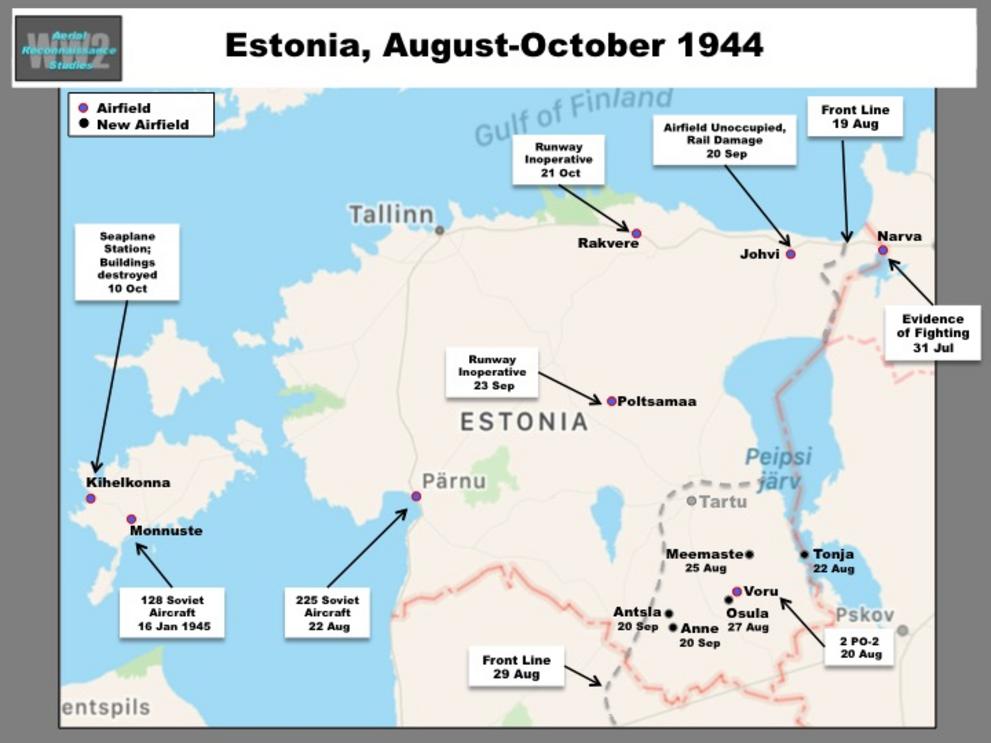