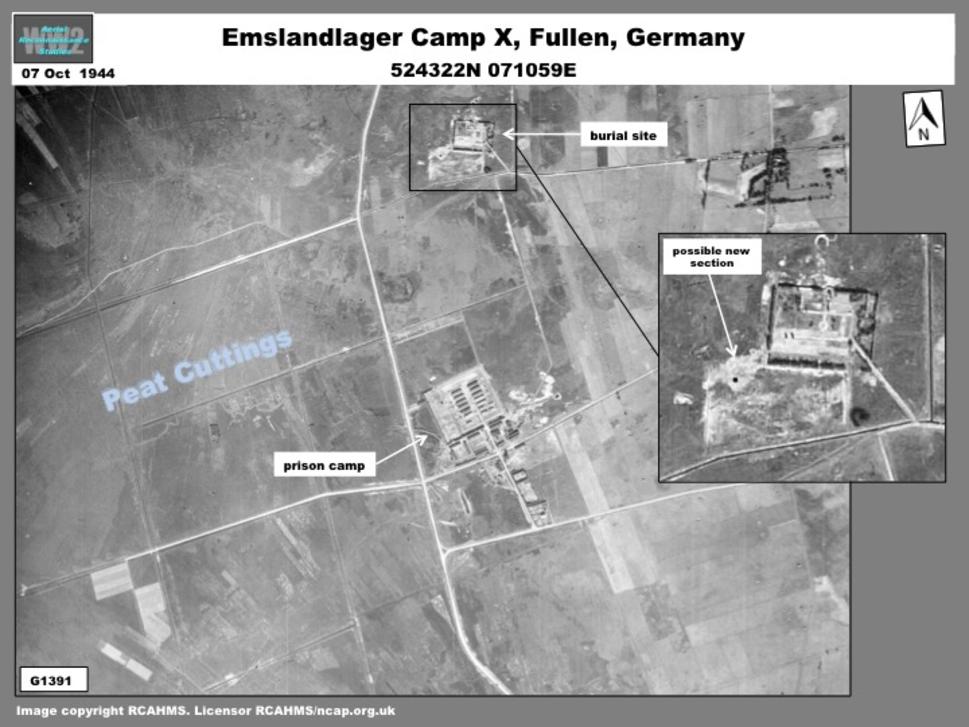 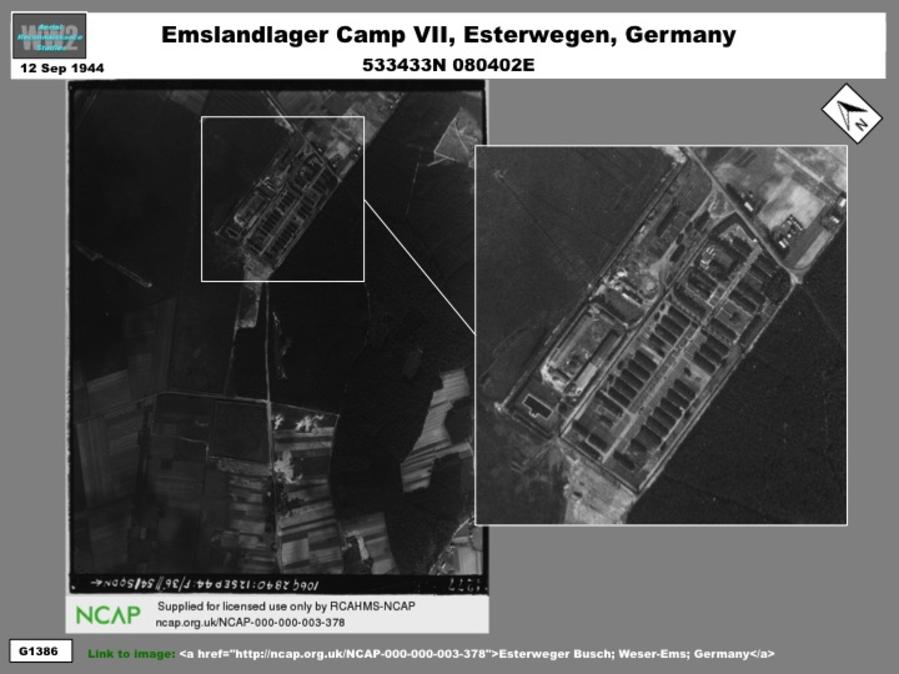 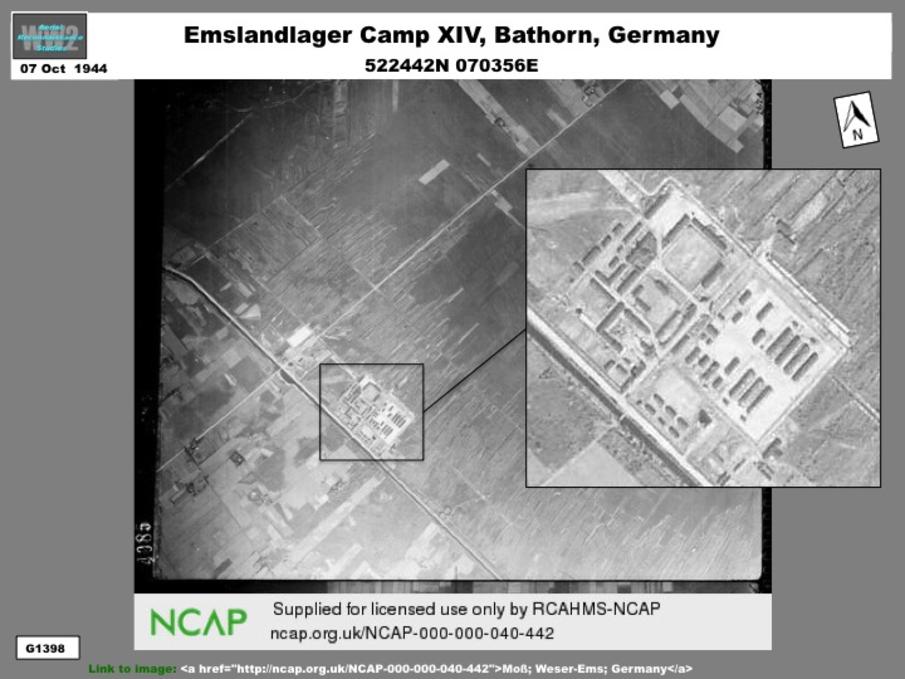 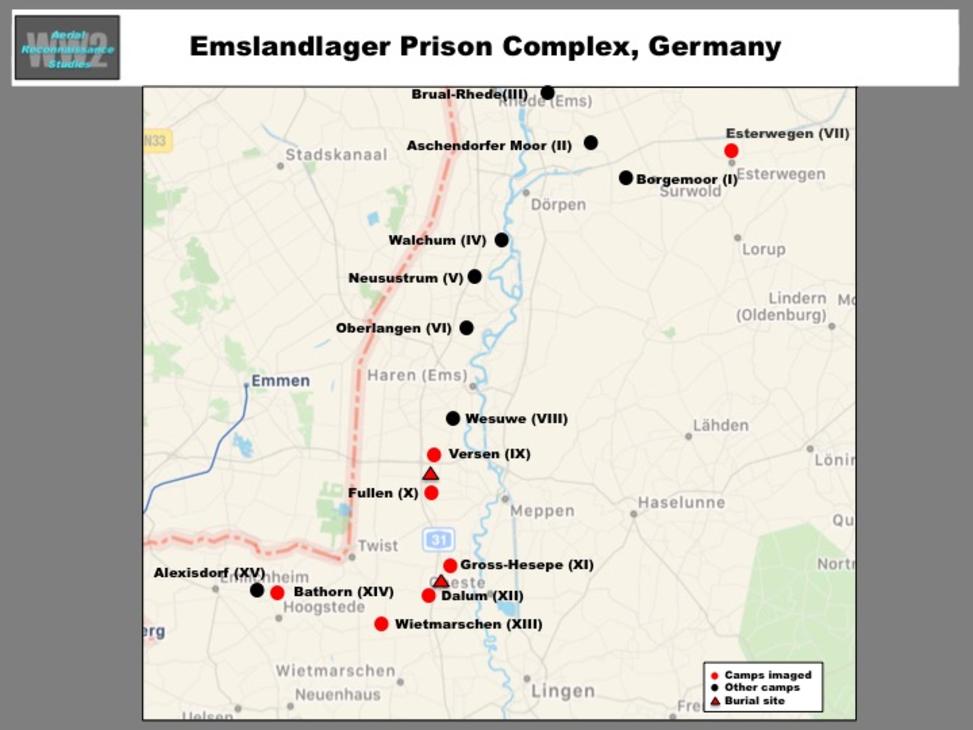 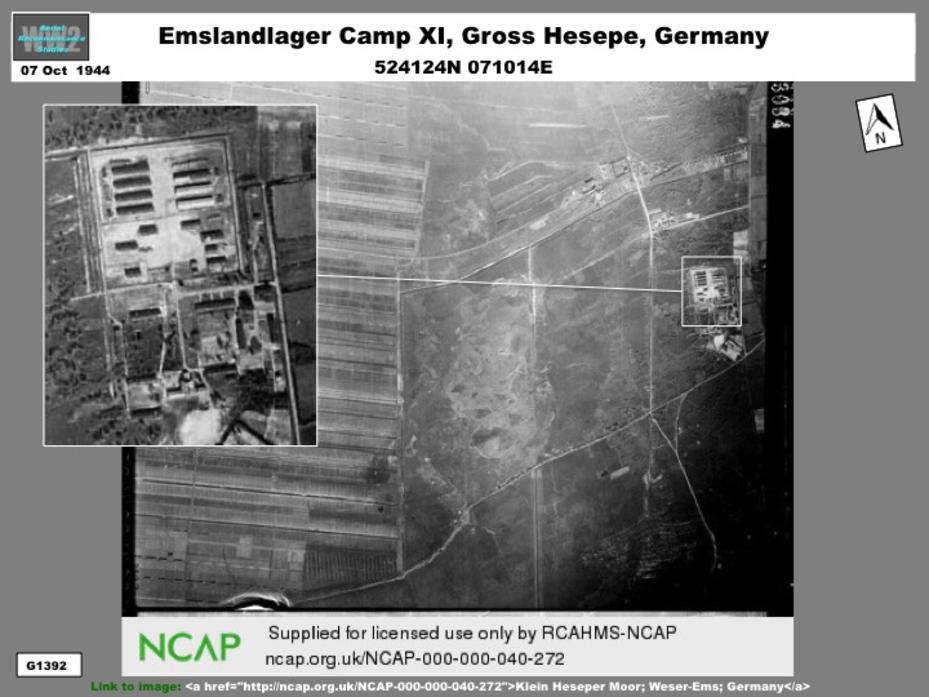 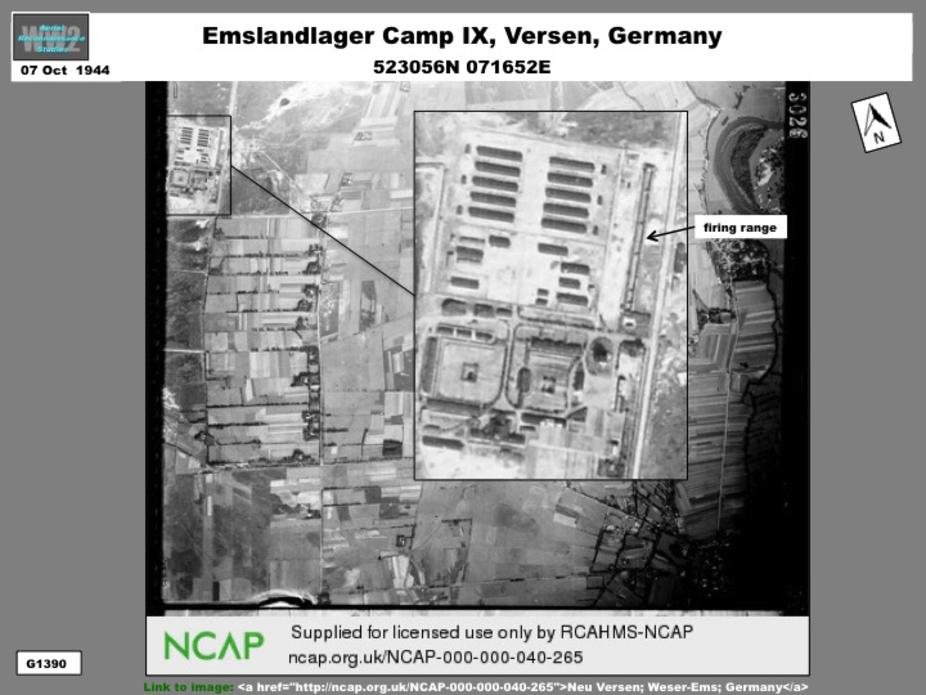 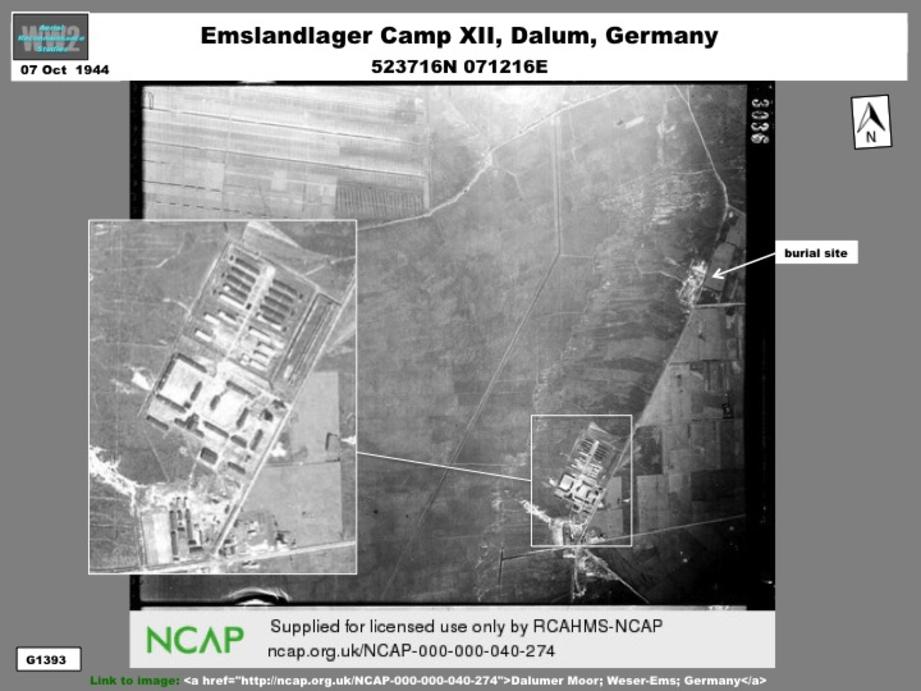 On 7 October 1944 a Royal Air Force reconnaissance sortie imaged a complex of prison camps in northwest Germany known as the Emslandlager.  Located in the districts of Emsland and Bentheim, the 15 camps (I - XV) comprising the complex were originally built to house political prisoners and other undesirables.  The first seven camps at Borgemoor, Aschendorfer Moor, Brual-Rhede, Walchum, Neusustrum, Oberlangen, and Esterwegen were constructed in 1933.  Esterwegen, Borgemoor, and Oberlangen were among the first  Nazi Concentration Camps established and were initially adminsitered by the SS; the other camps were administered by the Reichsarbeitsdienst.  The prisoners worked mainly in the peat bogs on the surrounding moor.  The eight camps in southern part of the complex --Wesuwe, Versen, Fullen, Gross-Hesepe,  Dalum, Wietmarschen, Bathorn, and Alexisdorf-- were also constructed as penal camps in 1938, but by 1939 had been converted to POW camps (STALAG VI-B/C) administered by Military District (Wehrkreis) VI.  In November 1944, Versen, Fullen, Gross Hesepe, and Dalum became sub-camps (Zweilager) of the Neuengamme Concentration camp --KZ Aussenlager Meppen-Versen.

​The 7 October sortie covered only six of the eight camps in the southern part of the complex. The Fullen camp, Emslandlager X, with a secured prison compound and a separate a guards barracks area, was relatively representative of the other camps.  Some of the camps had firing ranges.  A burial site for those who died at Fullen was 1 km north of the camp (Graphic 2) and a possible expansion of the site had been sketched on the ground nearby.  A second burial site was immediately north of the Dalum camp, but  clearings in the vicinity of other camps suggested there were more burial sites.  The other camps are covered on Graphics 3 - 8) 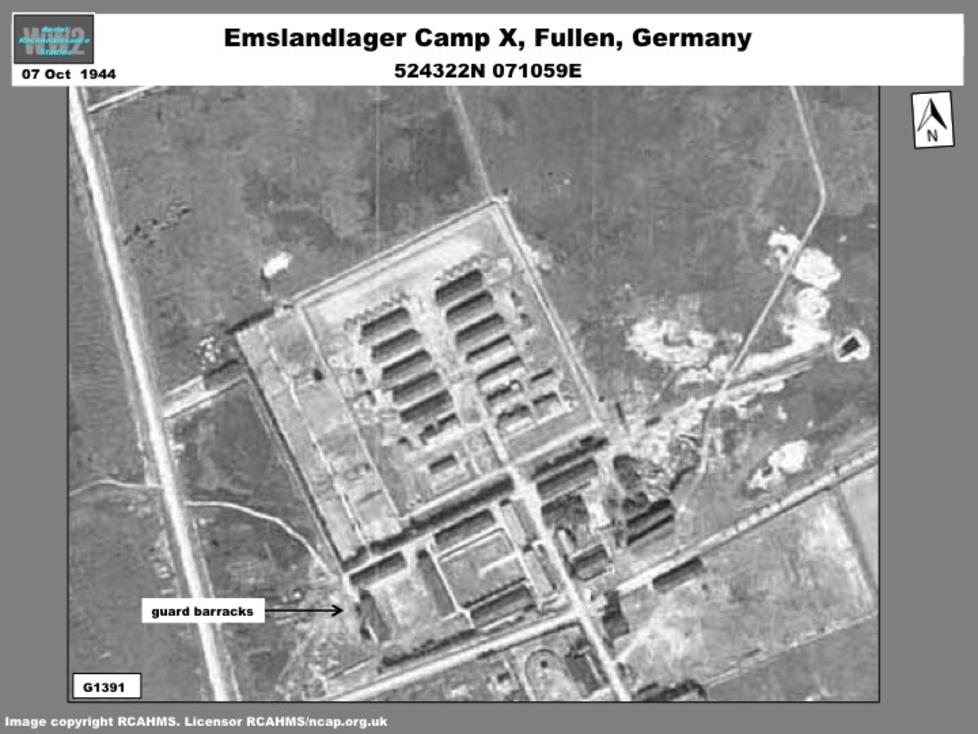 The following graphics display images of six other Emslandlager camps available at the NCAP website; a link to each image is provided on the graphic.

All of the facilities were similar, although there were 10 barracks in the prison compounds of Camps IX, X & XII while the others had only seven.  For some reason Fullen (Camp X)  was the only one without a large T-shaped building --probably a mess hall.  Bathorn (Camp XIV) was the headquarters of STALAG VI B/C.  Esterwegen (Graphic 8, imaged 7 October), the former concentration camp, became Emslandlager VII after administration was transferred to the Wehrmacht. 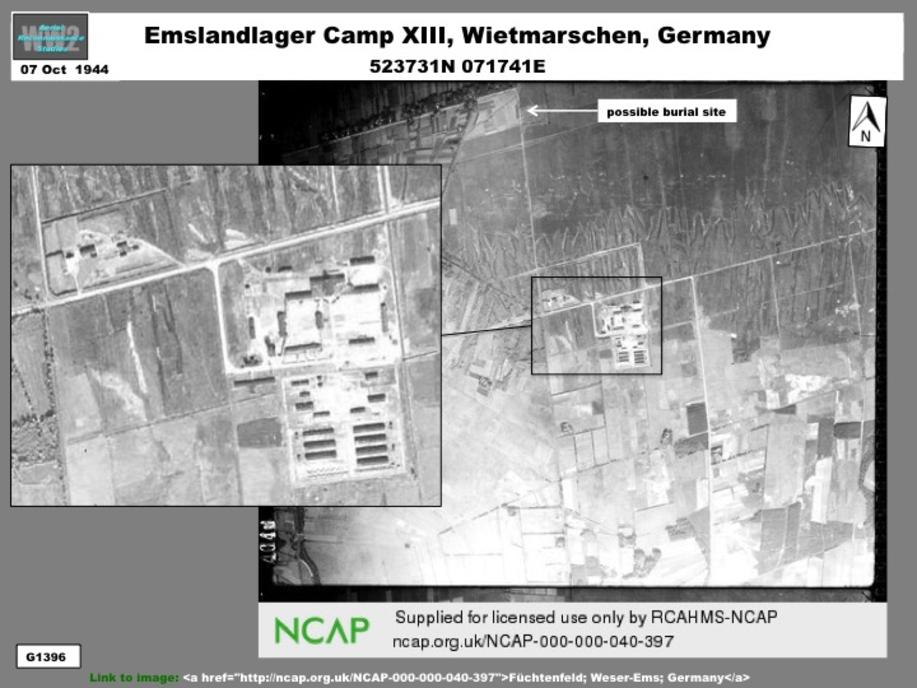