On 17 April, elements of the Red Army were in the city of Kamenets-Podolskiy, 40 kilometers east of the river crossing site (Graphic 2).  A large Soviet troop formation with a number of administratively parked vehicles could be seen in the eastern part of the city.  The city, which held a Wehrmacht vehicle repair depot had suffered extensive damage.  A group of possibly abandoned vehicles including some possible SdKFz half-tracks had been marshaled in the center of town.

Activity at two airfields in the vicinity of Mylyniv illustrates the close operational relationship between Soviet ground an air forces.  By 24 April, Soviet ground-attack and fighter units with 20 IL-2 ( two derelict) and more than 20 YAK-9 were based at Dubno 2, a former Luftwaffe field 18 km southeast of Mylyniv (Graphic 5).  The aircraft had departed by 16 August, but  a group of new revetments had been constructed by the Soviets after the April coverage (Graphic 6).   Thirty kilometers to the south another fighter unit with 28 YAK had occupied Hranivka Airfield by 31 May; new revetments had been constucted there (Graphic 8). 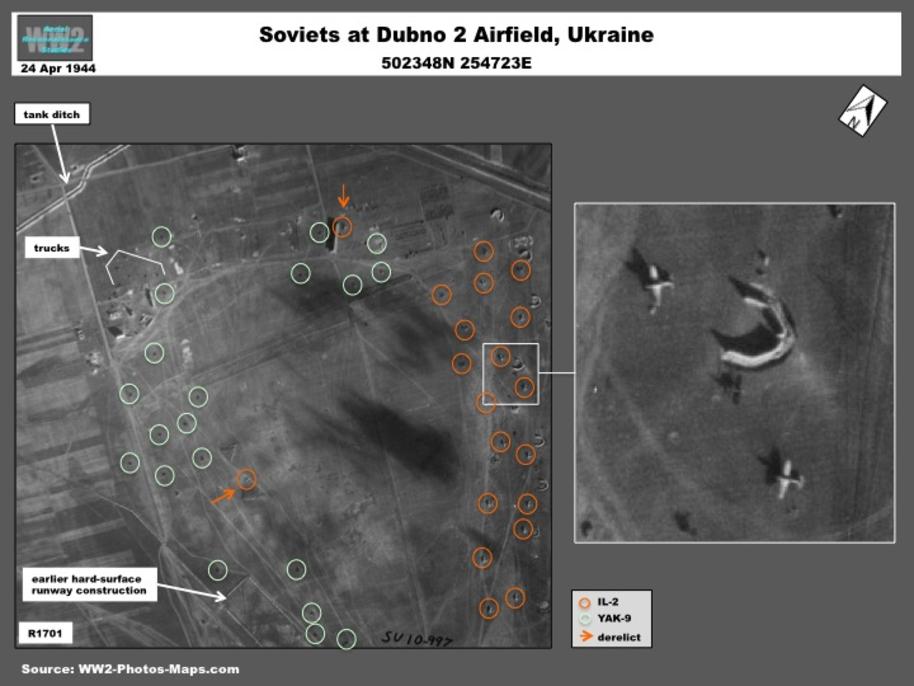 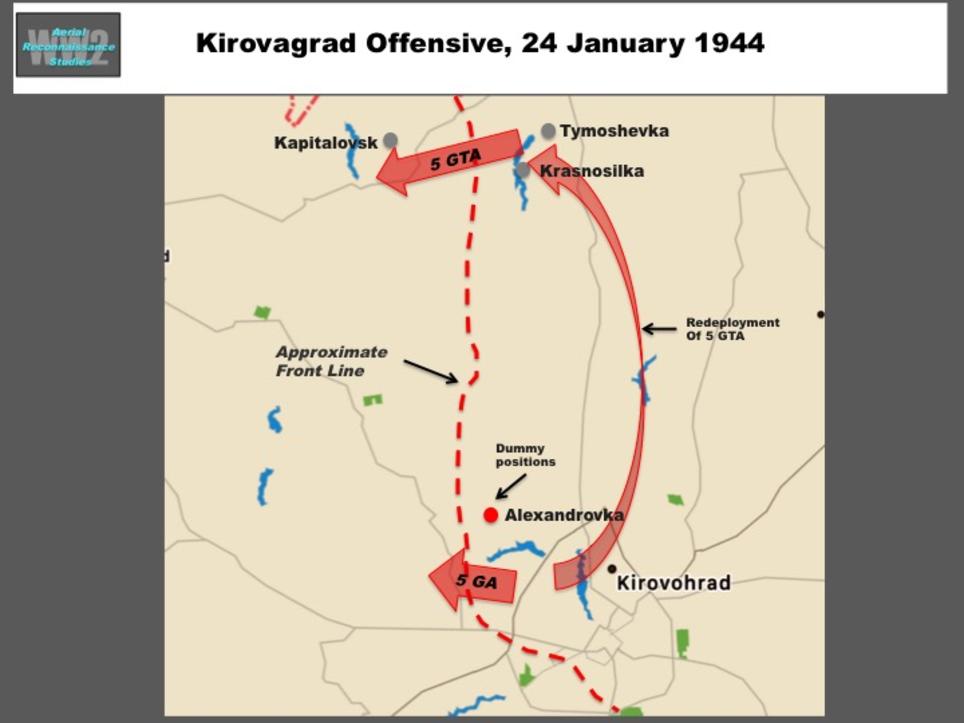 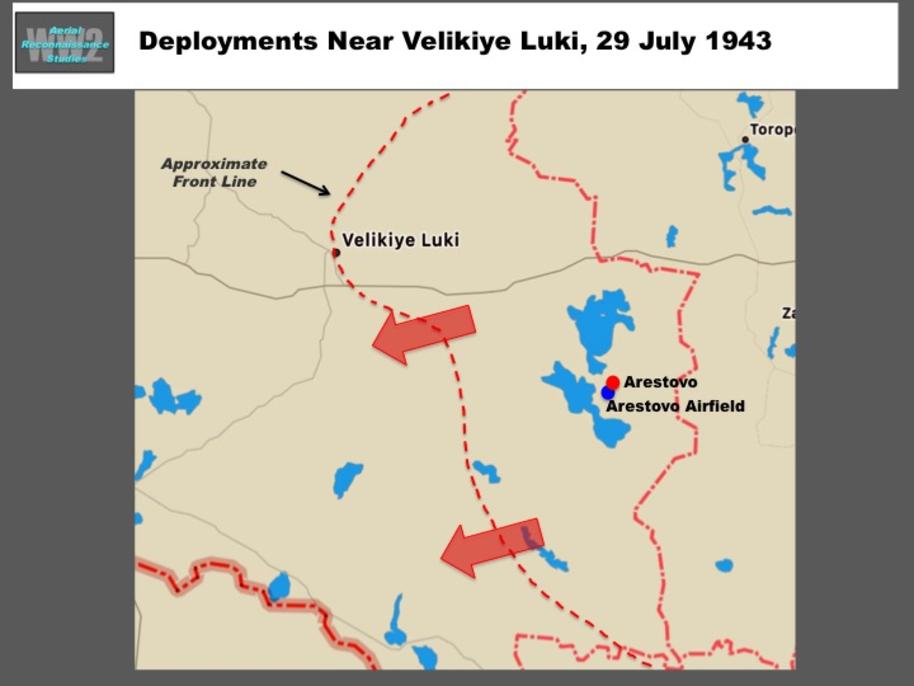 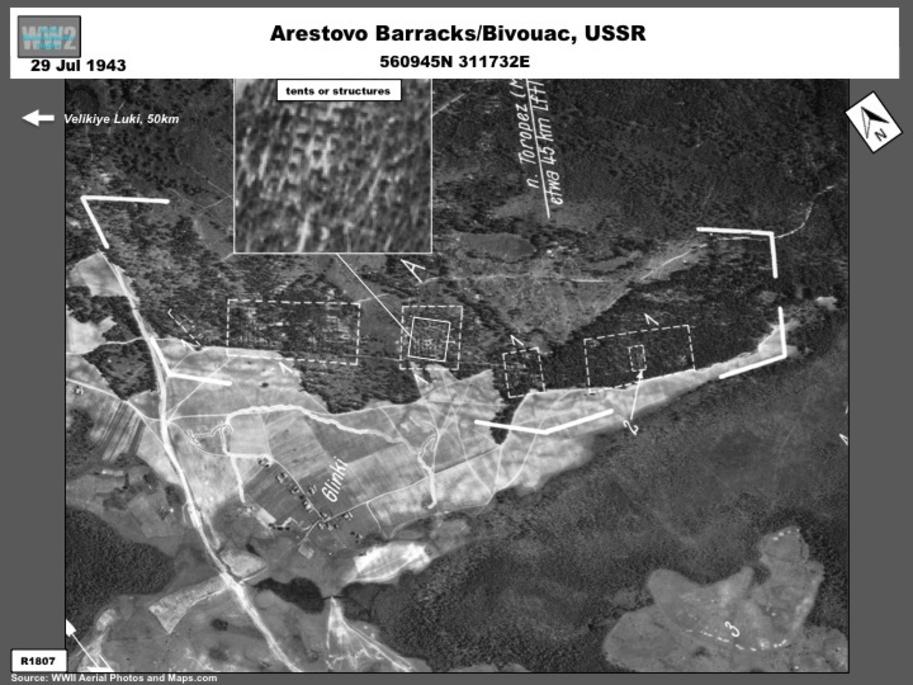 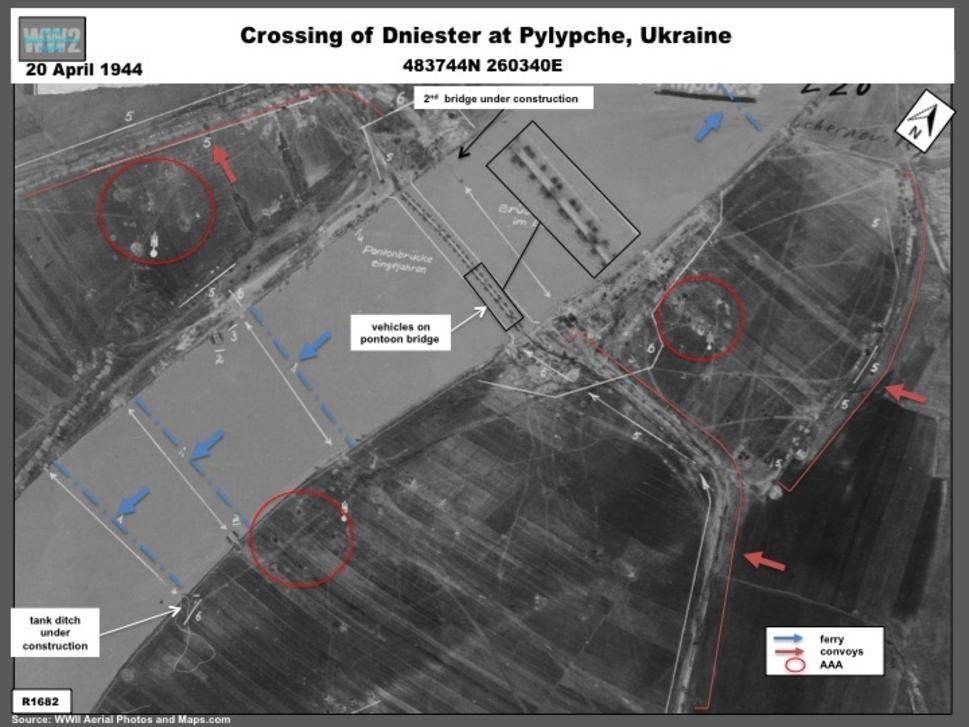 On 20 April 1944 Soviet units were crossing the Dniester River at Pylypche shortly after the offensive ended (Map & Graphic 1, below).  A pontoon bridge and four ferries were in use and a second pontoon bridge was under construction. Three anti-aircraft sites protected the crossing point and convoys could be seen on both banks. 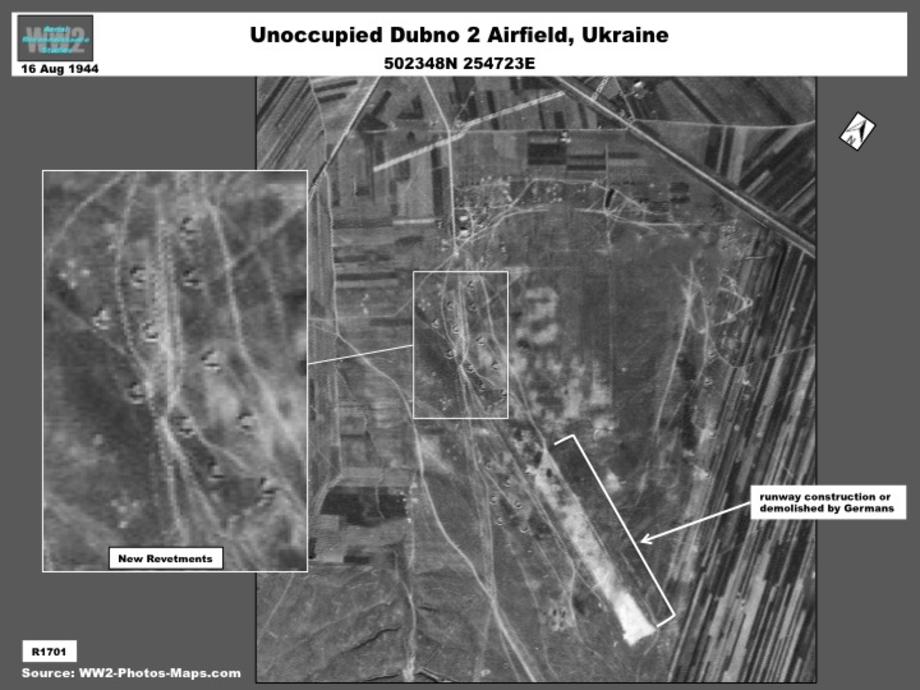 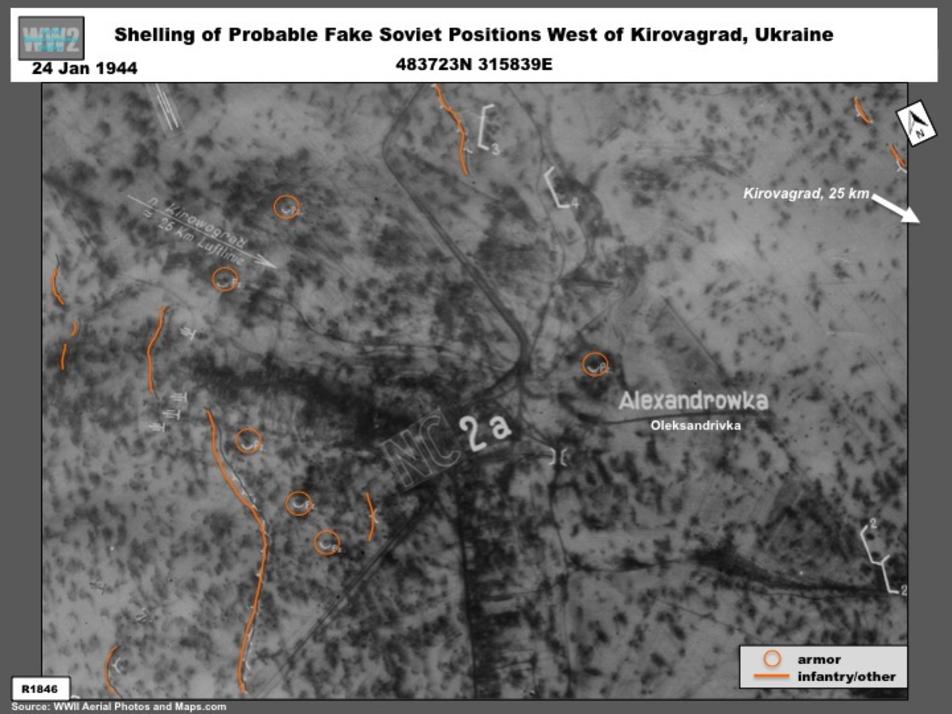 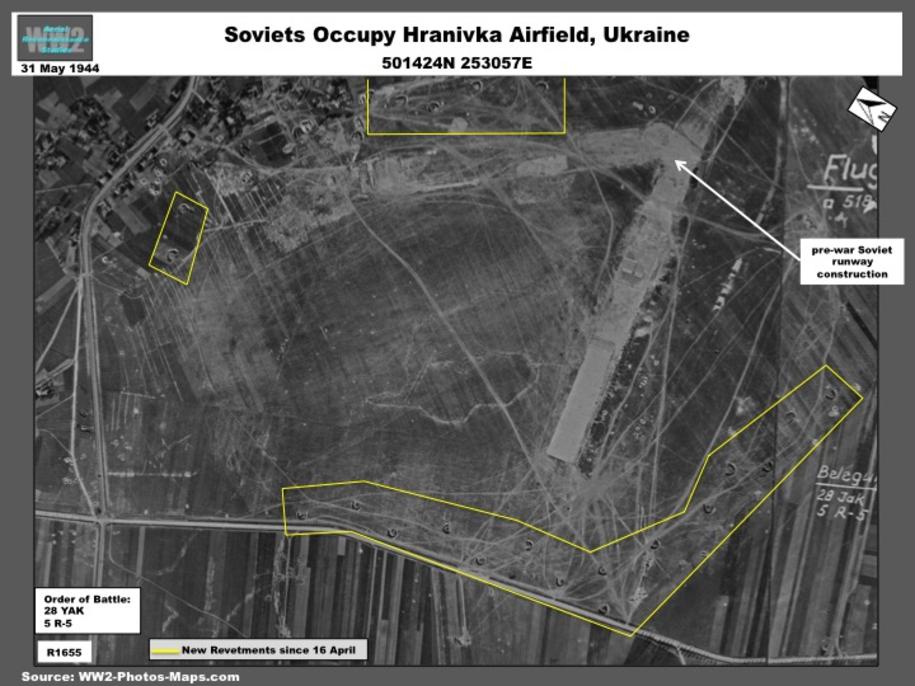 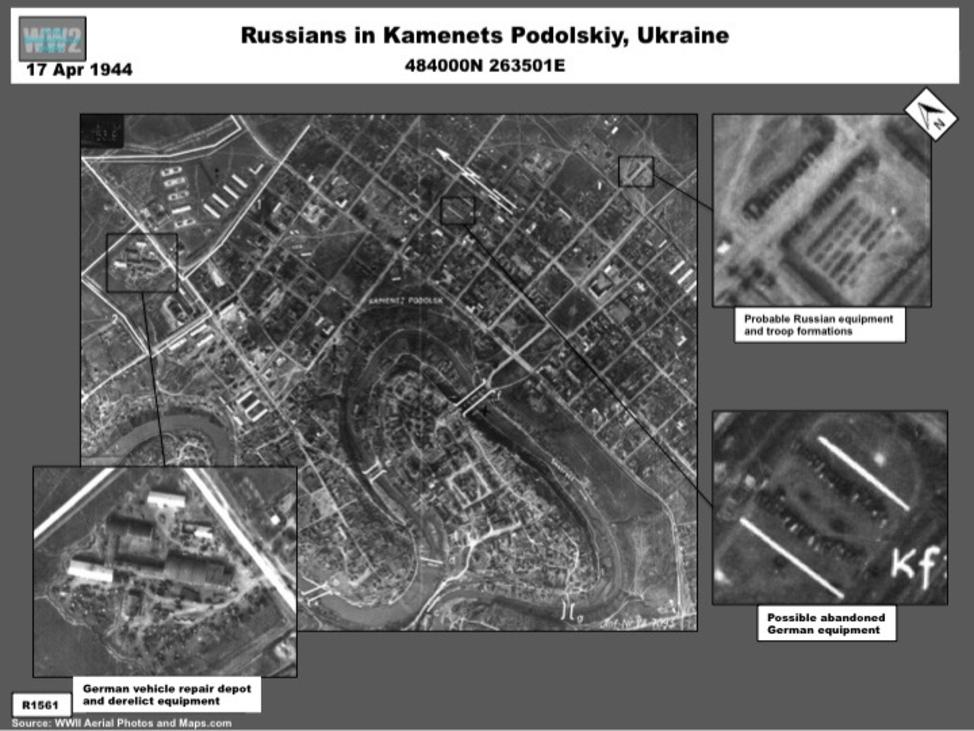 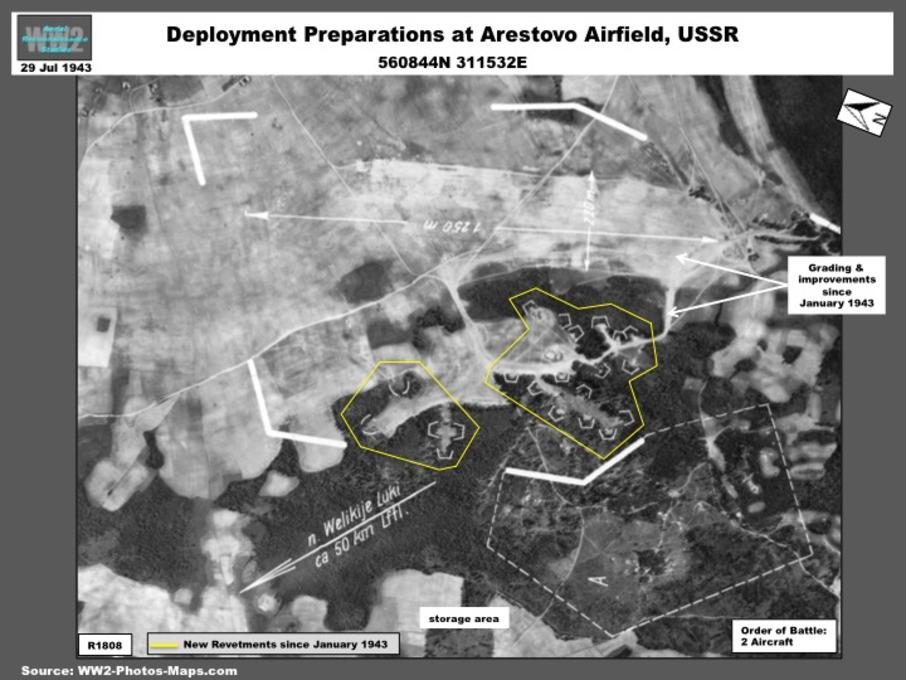 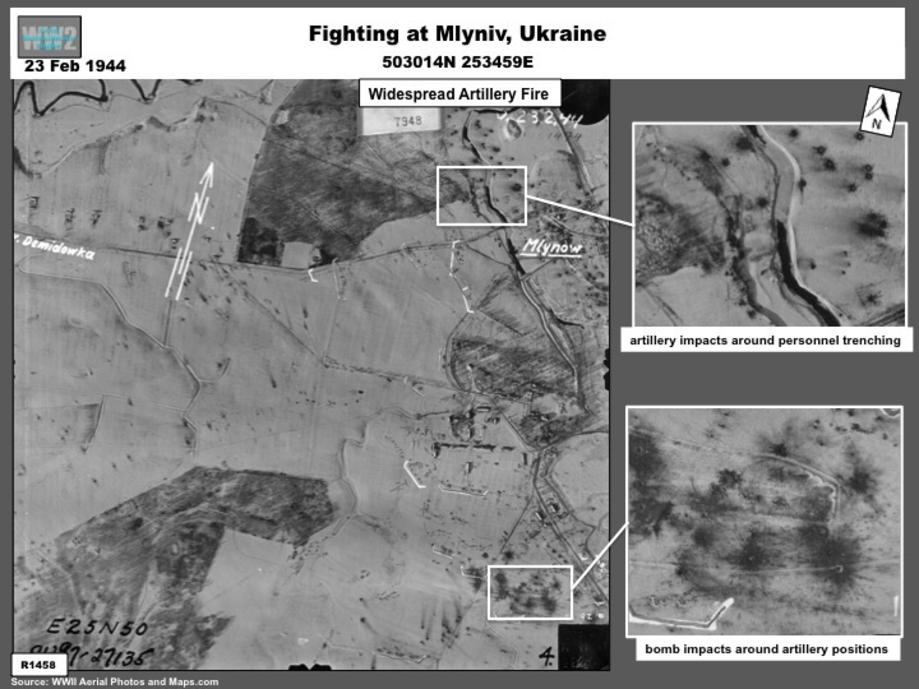 More than 200 km NNW of the Dinester river crossing, evidence of fighting could still be seen in the vicinity of Mylyniv on 23 February 1944 (Map, below, Graphic 4).  Mylyniv was on the front lines following the Rovno-Lutsk Operation, which was carried out by the 1st Ukrainian Front between 27 January and 11 February.   Soviet positions around Mylyniv had come under heavy recent German artillery fire and aerial bombardment.

The Dnieper-Carpathian Offensive (24 December 1943 – 14 April 1944) was a strategic operation to retake territory in Ukraine still occupied by the Wehrmacht.  The offensive, composed of many smaller operations, was executed by the 1st, 2nd, 3rd, and 4th Ukrainian Fronts and the 1st Belorussian Front against the German Army Group South and preceded by operations against Smolensk.  Available Luftwaffe reconnaissance images provided snapshots of related Soviet activity at four locations before, during, and after the offensive (Map, below). 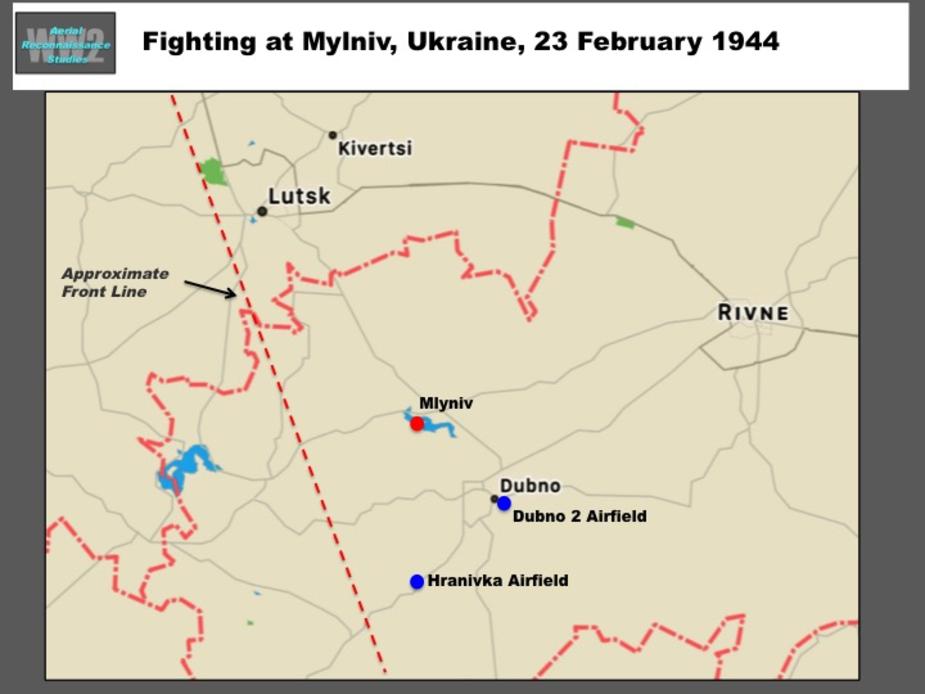 In the Korsun-Shevchenkovsky Operation (24 January-16 February) the 2nd Ukrainian Front attacked German positions west of Kirovagrad (Map, below).  Operational deception played a major part in this sector.  Before the attack the 5th Guards Tank Army (5 GTA) relocated from Kirovagrad to a new deployment area 30 km to the north near Krasnosilka and Tymoshevka; the Army’s movement was covered by active deception and the construction of dummy armor and artillery positions that led the Germans to believe an impending attack by 5 GTA would come from Kirovagrad.  The main offensive, on 24 January, was preceeded on the 23rd by a diversionary attack from the 5th Guards Army at Kirovagrad.  An image covering Alexandrovaka (Oleksandrivka)  area (Graphic 3) west of Kirovagrad on the 24th showed the result of heavy bombardment --either a result of the Soviet bombardment or a response from the German side-- covering some of the probable fake Soviet positions where six tanks and other positions were annotated on the photo.

The Soviet offensive in Ukraine was assisted by offensives in the central part of the Eastern Front that began with the Battle of Kursk in July 1943; in August, attacks were launched against Smolensk and Army Group Center in Belarus.  On 29 July 1943 elements of the Kalinin (soon to be 1st Baltic Front) were identified by German interpreters 50 km southeast of Velikiye Luki in the front’s north central sector (Map, below, Graphics 9 & 10).  Several large bivouacs with a total of approximately 300 tents or structures were deployed in wooded areas.  Preparations for the coming offensive were also observed at nearby Arestovo Airfield, an unprepared grass field that by July had been graded and improved with a taxiway and revetments.  The airfield was not yet in use, but two aircraft were present. 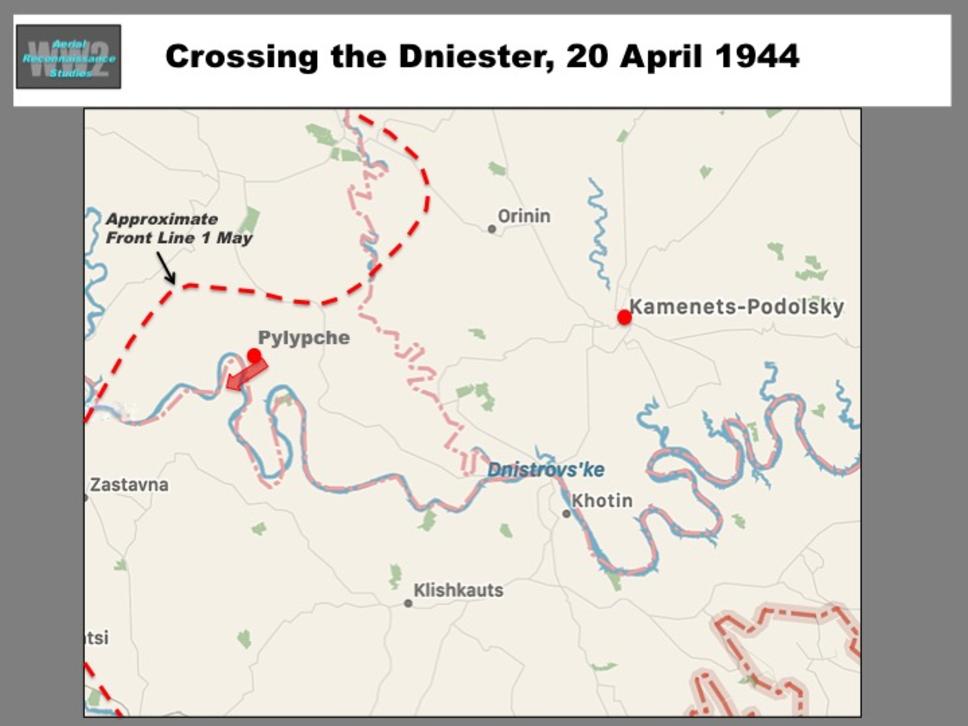 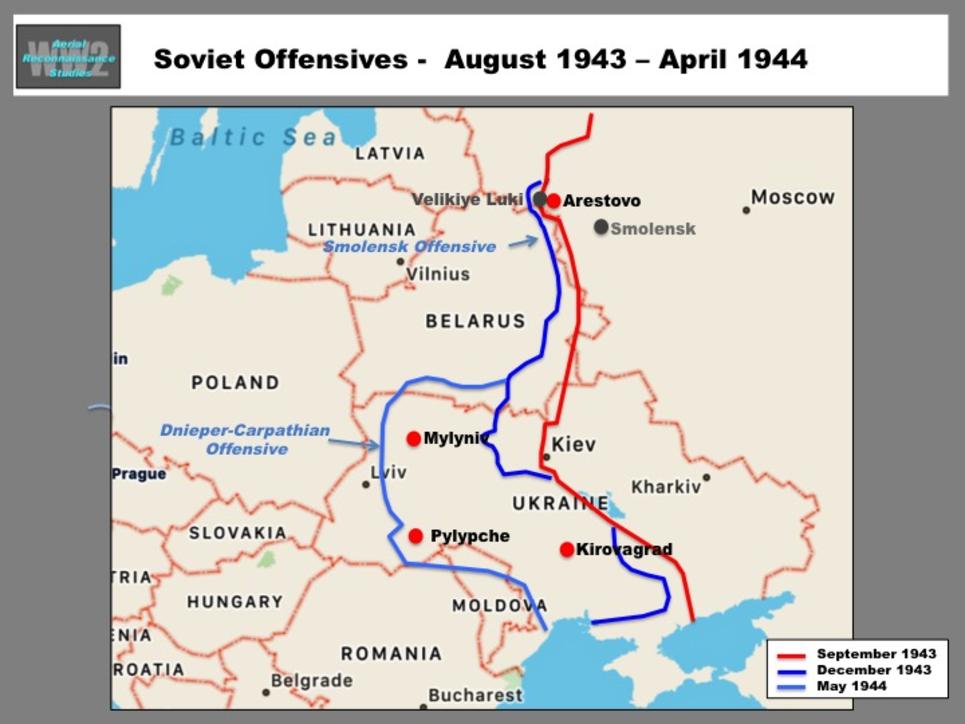