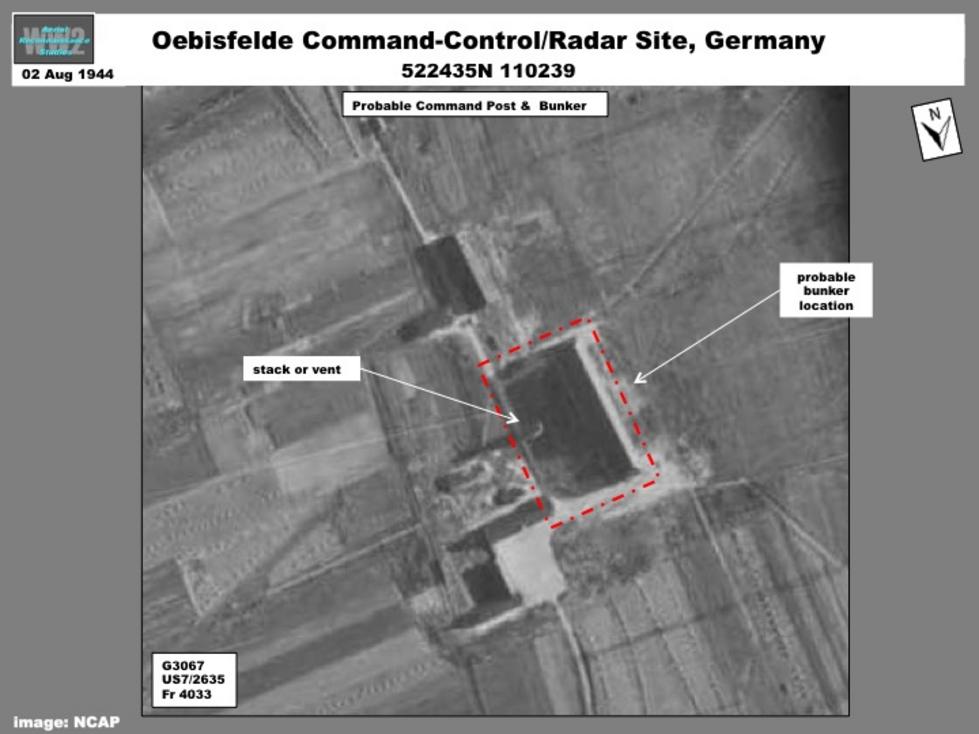 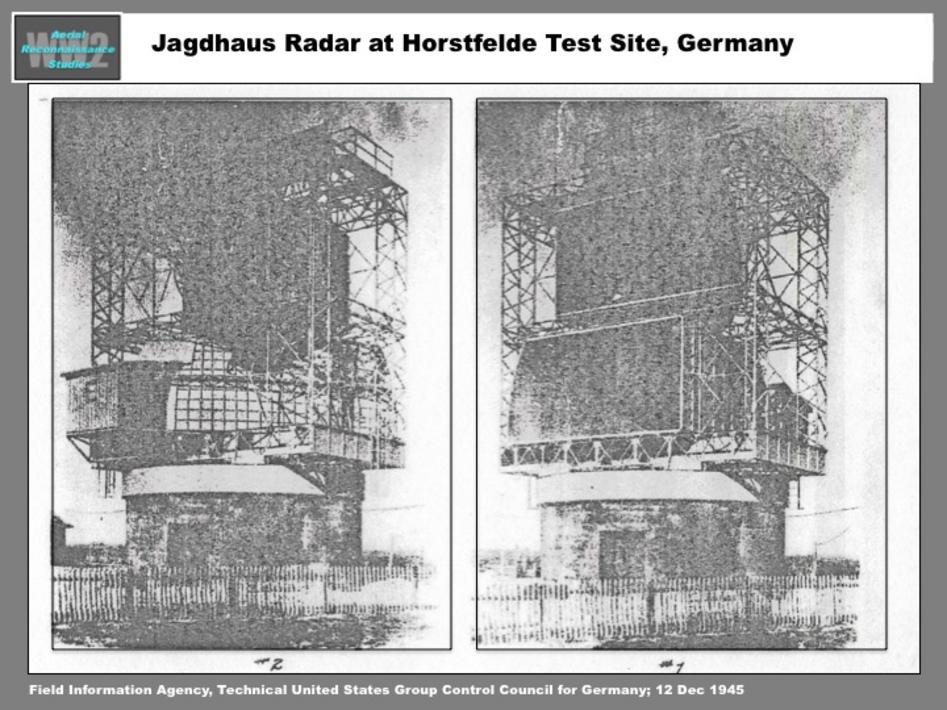 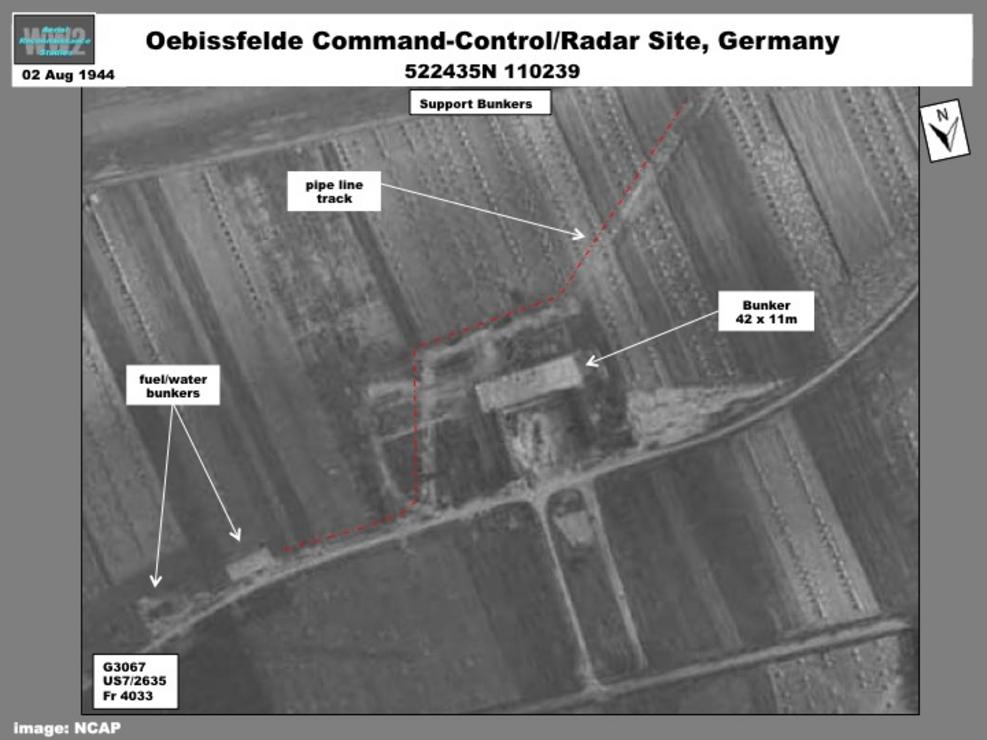 The purpose of the complex is unknown and does not fit in with the well-documented network of Luftwaffe air defense command and control facilities [2]. Still, the plan for a command post site at Oebisfelde suggests a special purpose facility that would have been ready in 1944 -- possibly one using new radar equipment.  One such radar was the "Jagdhaus", the Luftwaffe's most sophisticated panoramic radar (altitude, azimuth and range] with a range of 300 km.  At most there appears to have been only two Jagdhaus completed: one was destroyed at the Werneuchen test facility and the other was deployed for operational testing at  Horstfelde, south of Berlin [3] (Graphic 6). Notably, the Jagdhaus "control room" at Horstfelde was located beneath the radar [4].  One report [5] suggests a Jagdhaus was also deployed with Stellung "Fliege" at Etingen, and a circular base that appears similar to the the one at Horstfelde remains in a field north of Etingen to this day (Graphic 7).   ​

Analysis of imagery from 2 August 1944 revealed that a command-control bunker complex--probably for the Luftwaffe--was planned in the vicinity of Oebisfelde, Germany, 16 km east of Wolfsburg and 150 km west of Berlin. The complex had three areas, including a probable bunkered radar position that was still under construction and possibly abandoned.  The complex was situated between two radar sites (Stellung) belonging to IV. Abteilung, Luftnachtrichten-Regiment 214 (on 2 September 1944, reorganized under Luftnachtrichten-Regiment 231).  The complex was 10 km west of Stellung  "Fliege" at Etingen/Wegenstedt and 50 km east of Stellung "Panther" at Peine/Alvesse [1]. 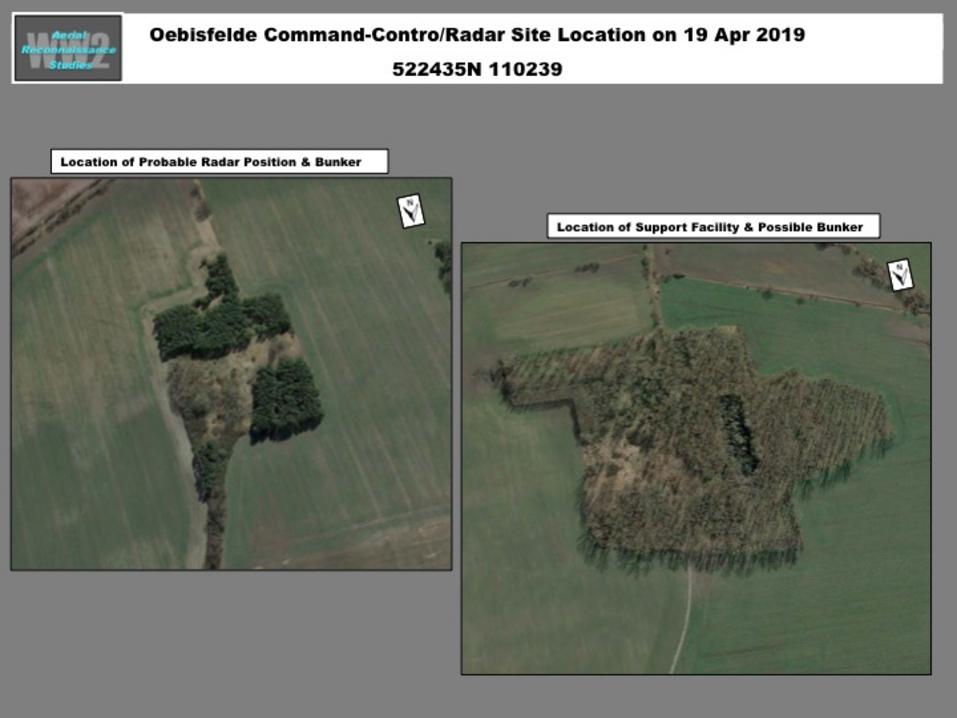 The probable command post area, accessed by a separate road, was 1200 meters northeast of the radar site and disguised a farm with some probable fake buildings (Graphic 4).  While the presence of a bunker could not be confirmed, a stack next to the main building could have acted a a vent.  Viewed on recent satellite imagery after removal of all the buildings, all three locations --especially the command post site-- show signs of past excavation (Graphic 5). 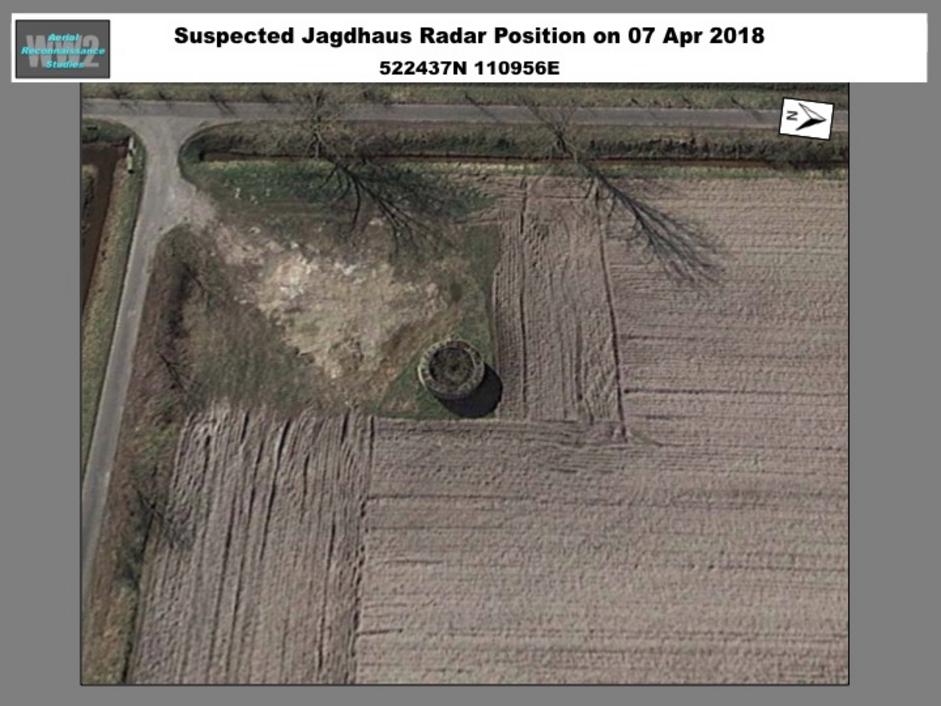 The support bunkers were near the complex entrance 800 meters northeast of the radar bunker and the two sites were connected with a pipeline (Graphics 1 & 3).  The largest of the four support bunkers had not yet been fully buried. 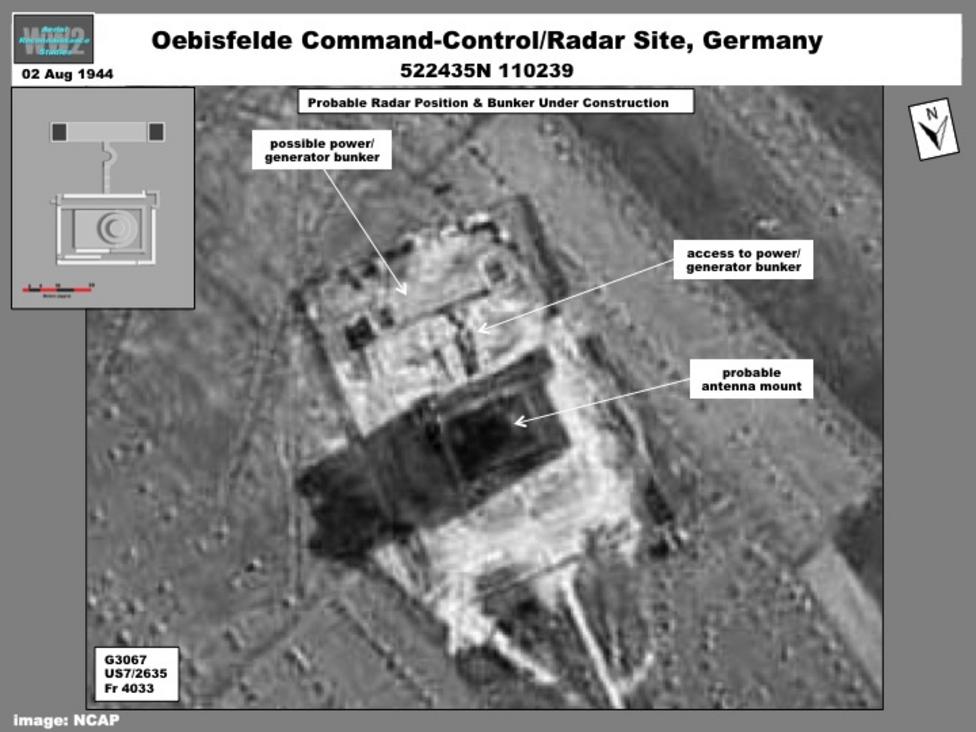 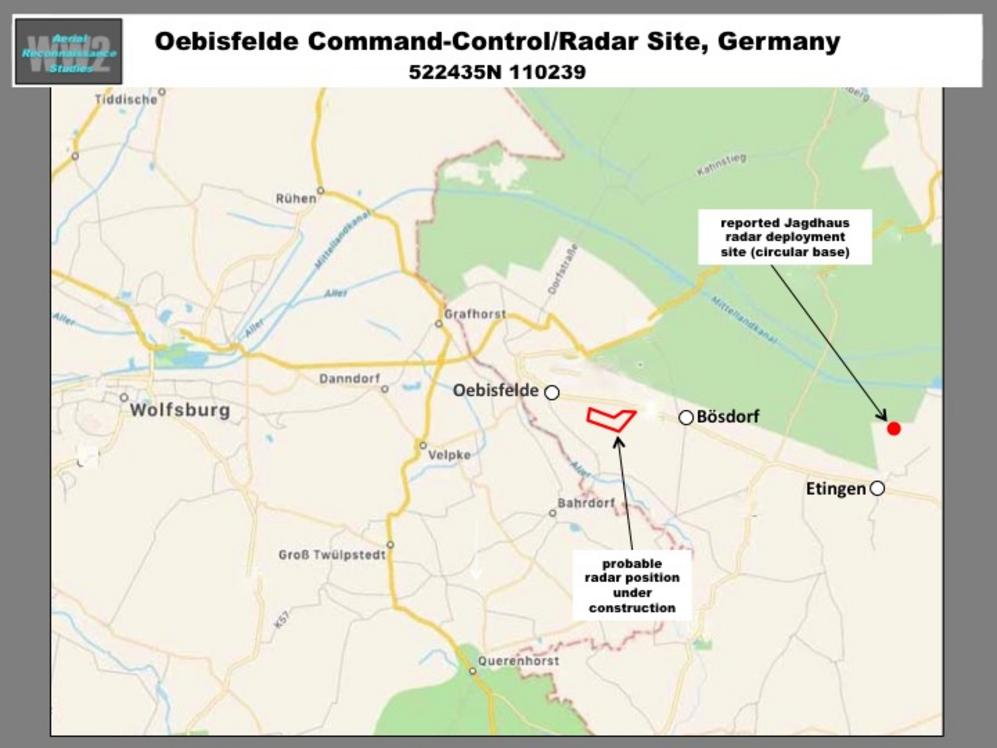 The sites comprising the complex included the probable radar position, a command post disguised as a farm and a group of support bunkers, including some for fuel and water (Graphic 1). The unfinished 30 x 40-meter radar bunker appeared to have double walls and at least two levels topped by a seven-meter-diameter antenna mount (Graphic 2).  The bunker was set in a rectangular excavation surrounded by a fence. The site was neatly-maintained, with no evidence of building materials or ongoing construction.  Immediately to the south, a 40-merter-long bunker with two large openings had already been earth-covered.  This bunker most likely been for power equipment, but it might also held bunker entrances, as it was connected to the main bunker by a passageway with U-shaped section to mitigate blast overpressure.

The full story the Jagdhaus development and deployment is unclear. It is uncertain even if a second Jagdhaus was ever built, but at 150 km west of Berlin, Etigen or Oebisfelde would be a logical location to site one of the systems.  The existence of the radar pedestal at Etingen does suggest a planned Jagdhaus deployment there, but this does not take into account the presence of the specialized command-control facility being constructed at Oebisfelde. 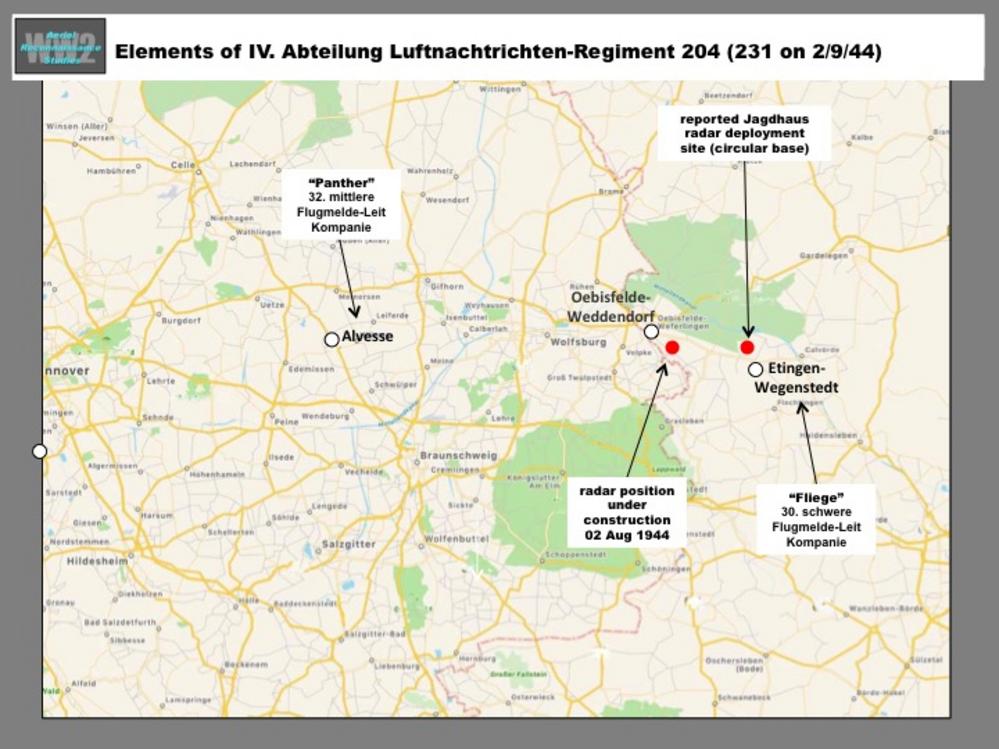 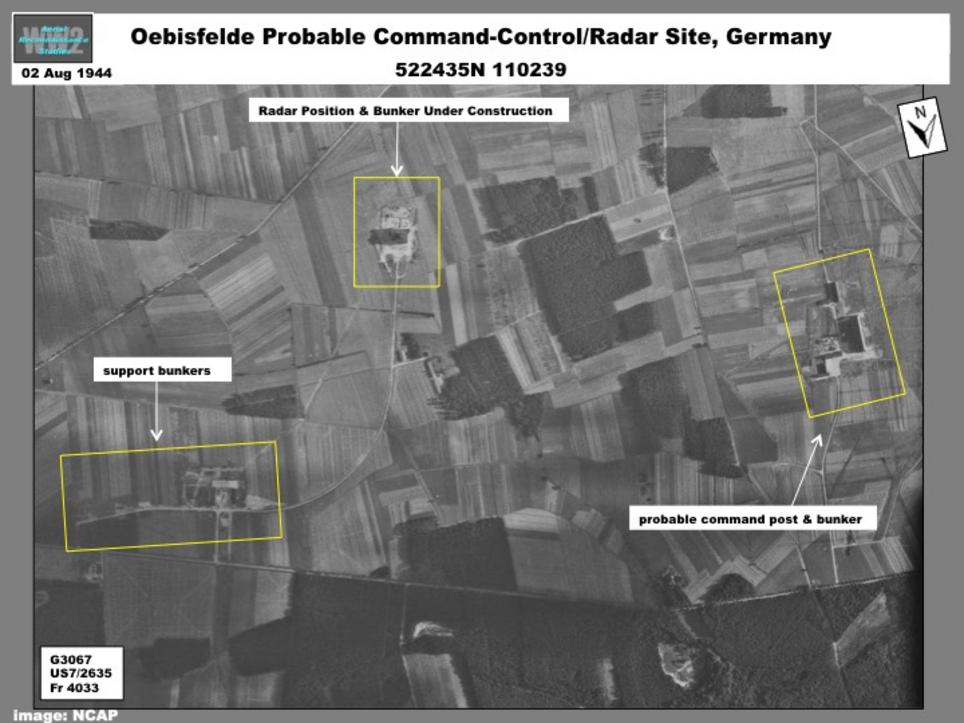