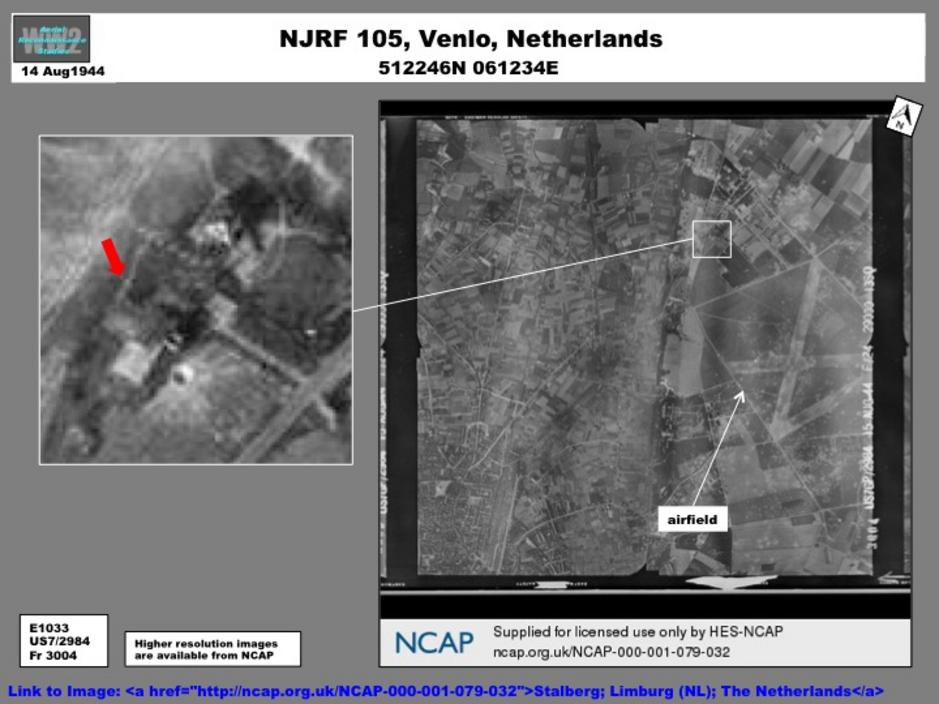 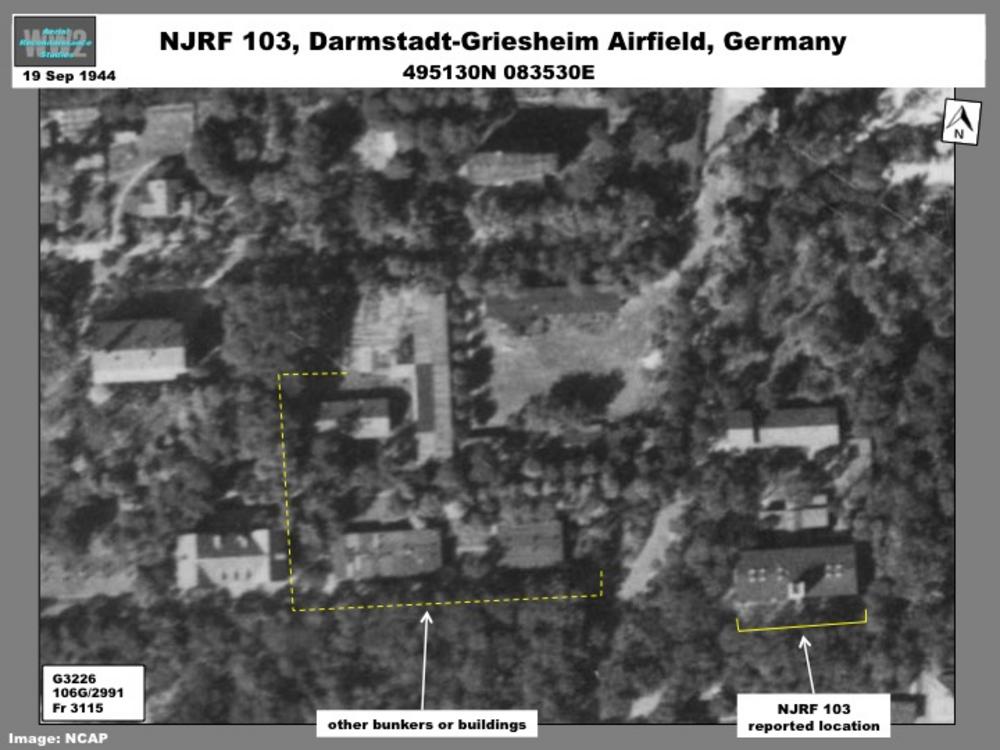 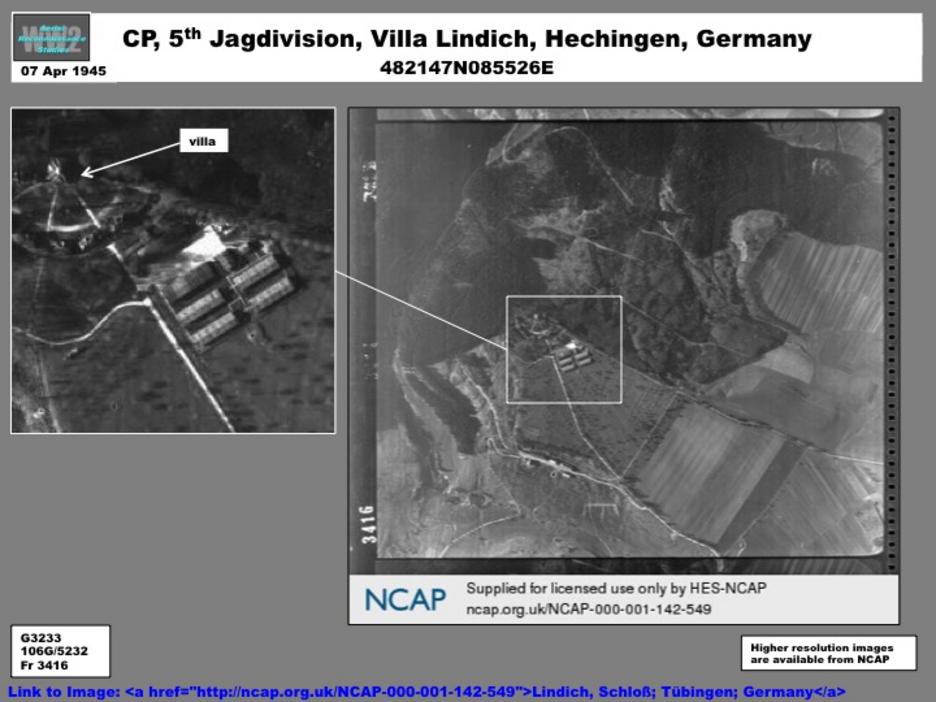 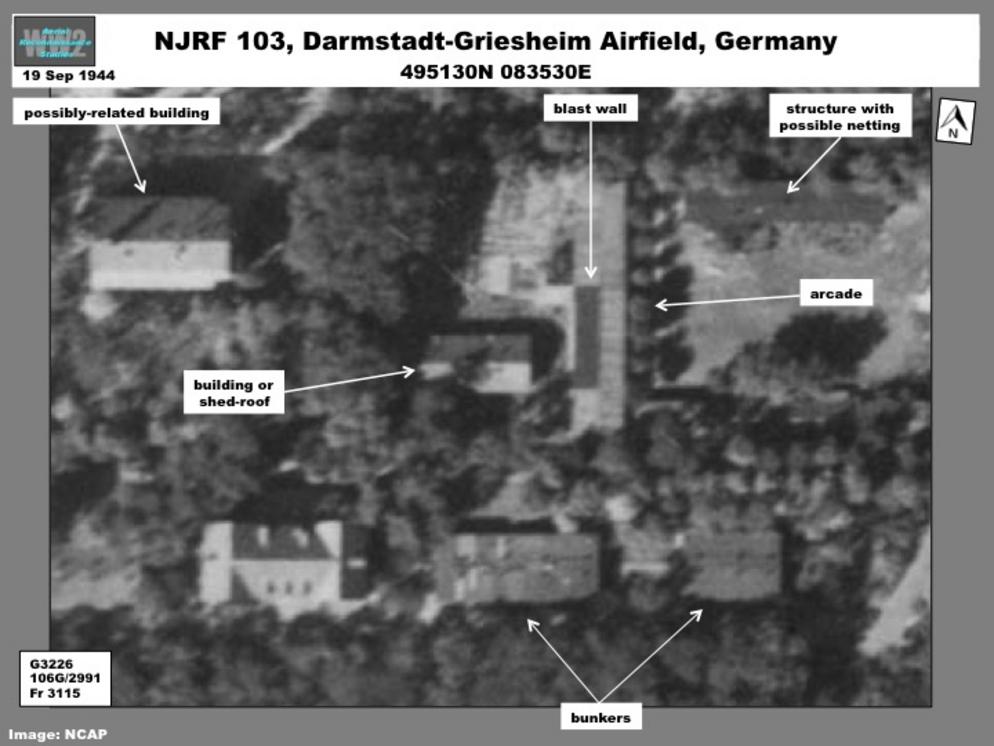 Late in the war, a radar station was deployed at the airfield after the establishment of Jafü Mittel Rhein (see Luftwaffe Radar Sites).

The command post of Luftwaffe Kommando West, which originated in Paris as Luftflotte 3, arrived at Schloss Dehrn, near Limburg-an-der-Lahn on 26 September 1944 (Graphic 14).  On the way to Germany, the command post --codenamed 'Adler'--also stopped at Riems, France and Arlons, Belgium.  A review of available imagery revealed four light anti-aircraft sites were deployed around the schloss  before the arrival of the command post, sometime between 25 August and 25 September; in addition, a possibly net-covered position was set up in a nearby orchard after 25 August. 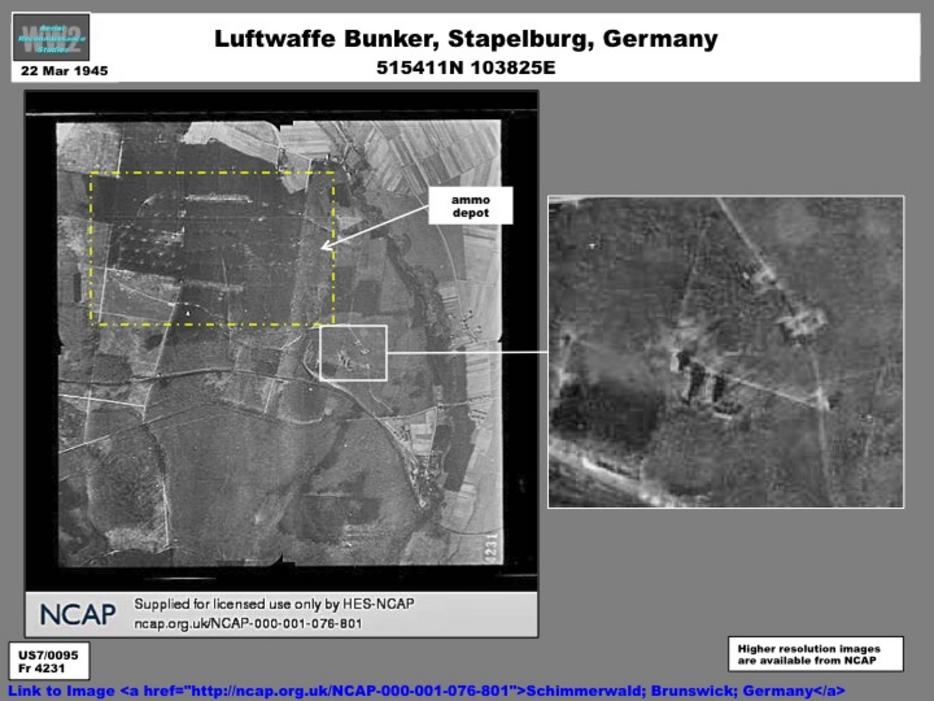 In February 1945, the staff of Luftfotte Reich deployed from its command post at Berlin-Wansee. The staff, codenamed 'Herold 4', operated from a facility in an ammunition depot at Stapelburg through April (Graphic 13) before moving on to Quassel. 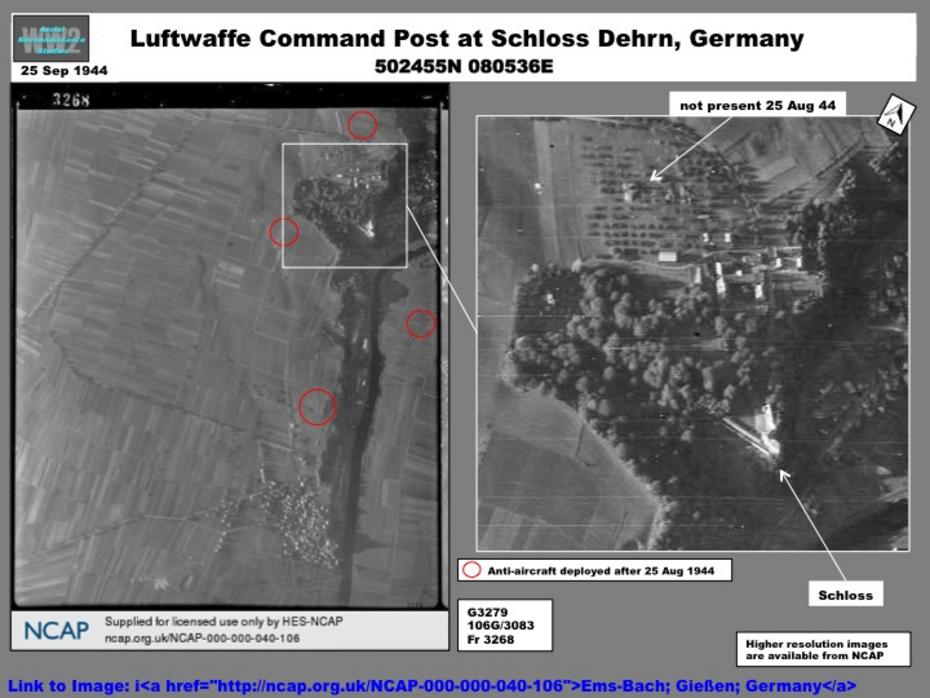 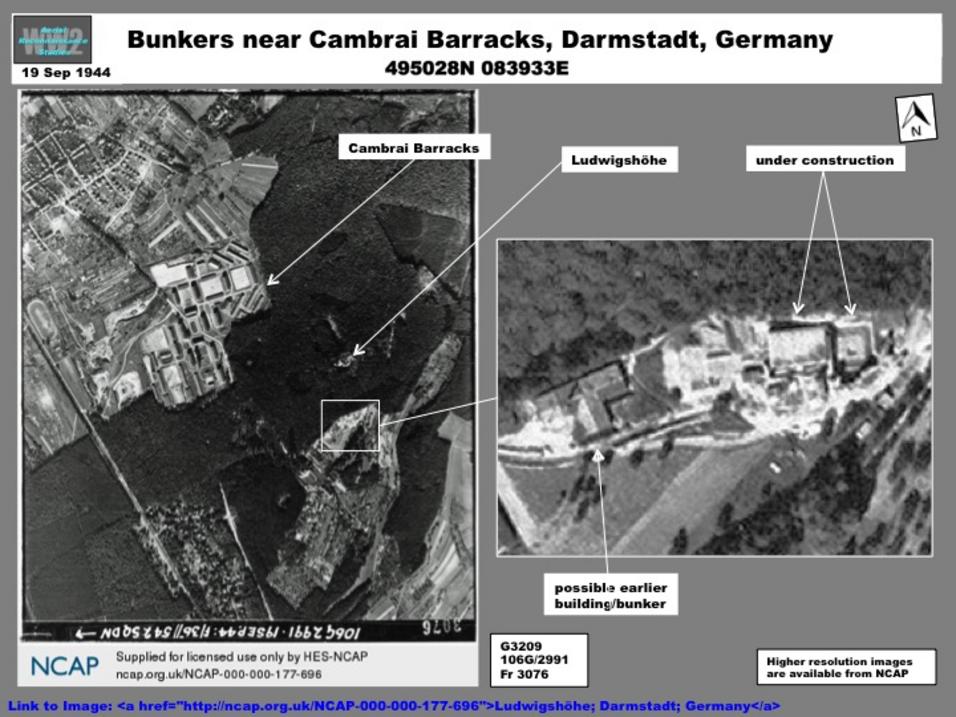 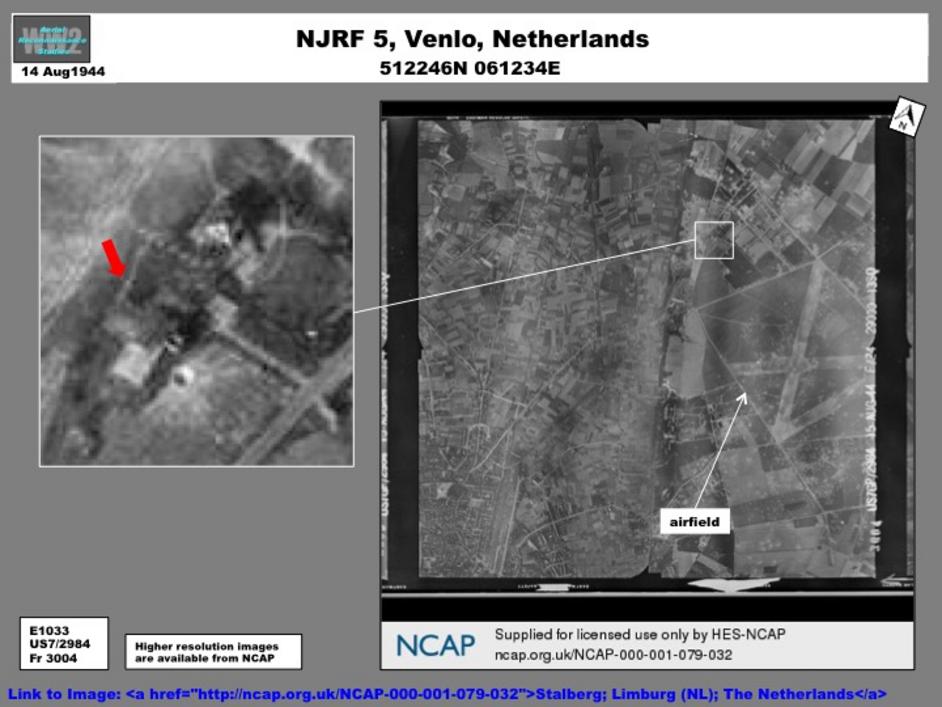 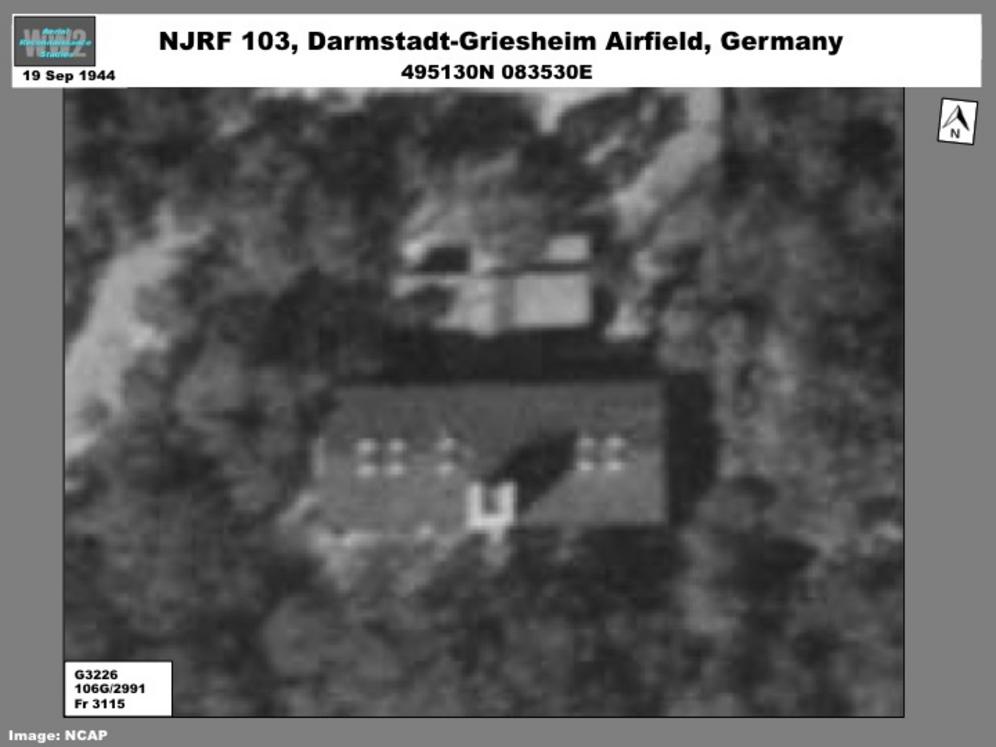 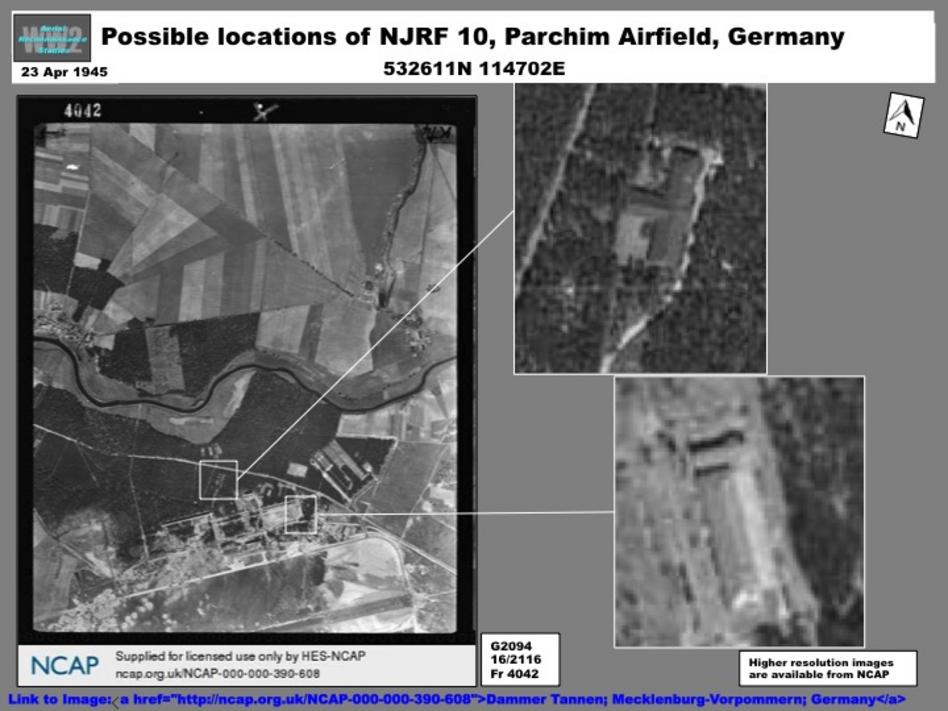 Another bunker complex was identified 5 km east-southeast of Griesheim and southeast of the Cambrai-Fritsch Kaserne. The complex occupied a school and was situated at the base of a hill known as the Ludwigshöhe; it contained a barracks, two bunkers and a T-shaped possible bunker/building with a blast wall (Graphic 4).  At least one of the bunkers was still under construction.  Available information indicates this was the original site of the Kombinierte Nachtjagd (KONAJA) 'Dachs', established for the Luftwaffe 21st Flak Division in 1941.  Later, this command post was repotedly moved to a hotel complex on the hill and another building/bunker (still present) on the hill was never completed; however, the building was already present in September 1944 and there was no evidence of ongoing construction.

As the war came to a close, the command staff of the Oberkommando der Luftwaffe (OKL) were forced to leave Berlin. According to Gyges the staff of OKL Fürhrungs Nord ('Kurfürst 1') deployed from Potsdam by 23 April 1945.  Before reaching its final destination, Silberstedt, Schleswig, the staff briefly operated at Rechlin Airfield, where it occupied a building in the officer's housing area.  Coverage of Rechlin on 3 October 1943 revealed the probable location of the command post. The site, in the airfield's western support area (Gruppe West), was a bunker attached to the probable officer's casino.

An excellent example of the large command post buildins constructed for upper echelons of the Luftwaffe air defense system was the one constructed for the 7 JD at Oberschliessheim (Graphic 9). The bunker, a large mostly above-ground structure with the code name 'Minotaurus', was in use between October 1943 to July 1944; after that, the command post relocated to Pfaffenhofen.

Two command post bunker complexes operated by the Luftwaffe Intelligence Service, the Luftnachtrichtendienst, were identified in the vicinity of Darmstadt, Germany on imagery from 19 September 1944. The main site, located at Darmstadt-Grieshein Airfield, was the known location of a night-fighter command post, Nachtjagdraumdflieger 103 (NJRF 103) that was replaced by the day-fighter command post, Jafü Mittel Rhein (Jagdfliegerfürher). The other complex appears to have been the site of the Darmstadt area Kombinierte Nachtjagd (KONAJA) 'Dachs.'  A review of available imagery revealed coverage of other command posts   A review of available imagery revealed coverage of at least eight other sites including: Parchim, Königsberg, Oberschliessheim, Deelen, Venlo, Hechingen, Rechlin, Stapelberg and Limburg.  For a full description of the organization and operations of the Luftnachrichtendienst, please see www.gyges.dk.

According to Gyges, NJRF 111 served the East Prussian area and was located in the vicinity of Königsberg Devau Airfield. The  location for the Jafü, East Prussia has been established at another site to the southeast (Seewiessen).  A study of imagery covering Devau Airfield on 6 August 1944 revealed that NJRF  situated next to a barracks one kilometer southeast of the airfield (Graphic 6); today the site is in use as a Russian naval communication facility.  The main bunker (Bunker 1) was built into a hillside and by 1944 was well-concealed with vegetation. It is not clear how far the bunker extended into the hill. Bunker 2 was a linear structure at the south edge of the complex.  Some features of Bunker 1 were hard to see in 1944, but could be could be clearly seen on recent satellie imagery; however (Graphic 7); it is not clear if some of these were the result of later construction.

Another section of the complex was located west of main building (Graphics 2 &3). This section was comprised of at least two other bunkers and a central building protected by a blast wall; walkways appeared to lead from the road through both other bunkers and to the central building. A prominent feature of the complex was an arcade and a hedge that screened the central building and blast wall from view.  Possibly associated facilities included a structure (possibly net-covered)  and a larger building northwest of the central area.  In an attempt at visusl disruption, possible netting appeared to have been laid on the ground west of the arcade.

Parchim Airfield, the site of NJRF 10, was covered on 23 April 1945.  Although the exact site of the NJRF could not be confirmed, but two possible locations were identified (Graphic 5) 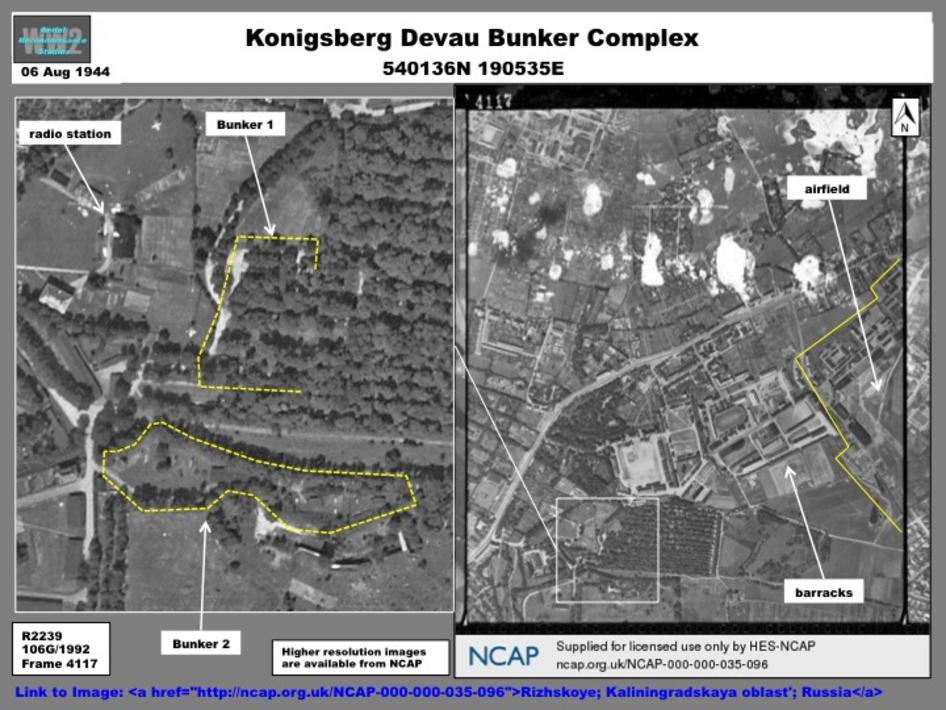 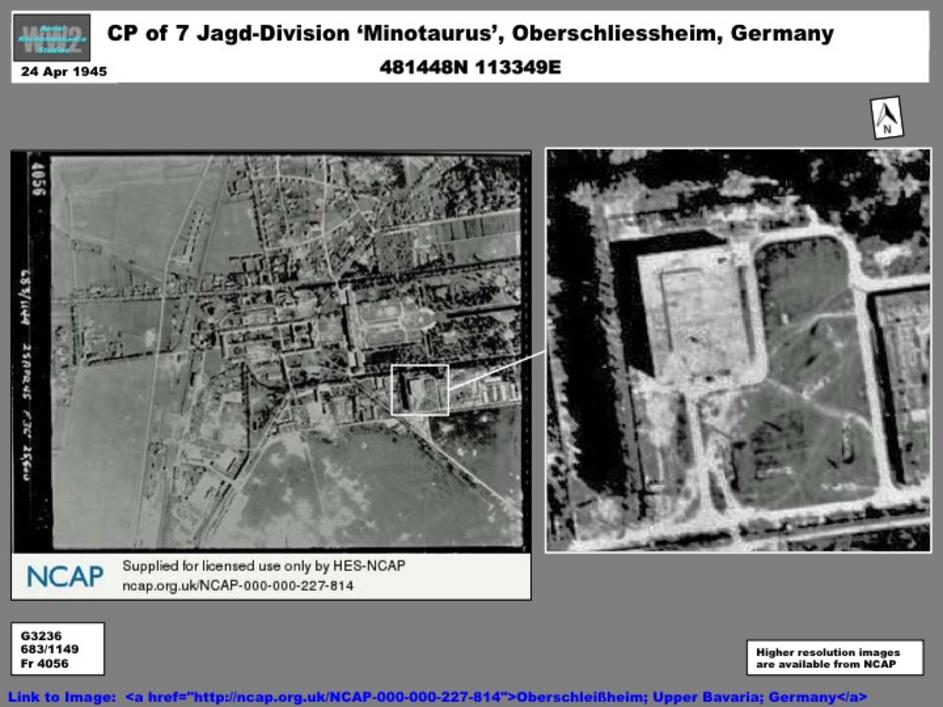 The command post for 5 JD also was also forced to relocate late in the war. Originally stationed in France between October 1943  to August 1944, 5 JD moved to the Villa Lindich at Hechingen where it operated through December. On 7 April 1945, the comand post was identified at the villa 3 km west of Hechingen (Graphic 11).  A small installation with seven additional buildings villa (not recently constructed) indicated the site had been prepared for use long before the command post arrived. Despite this, the presence of three relatively new power or communications lines suggested a relatively recent upgrade.. 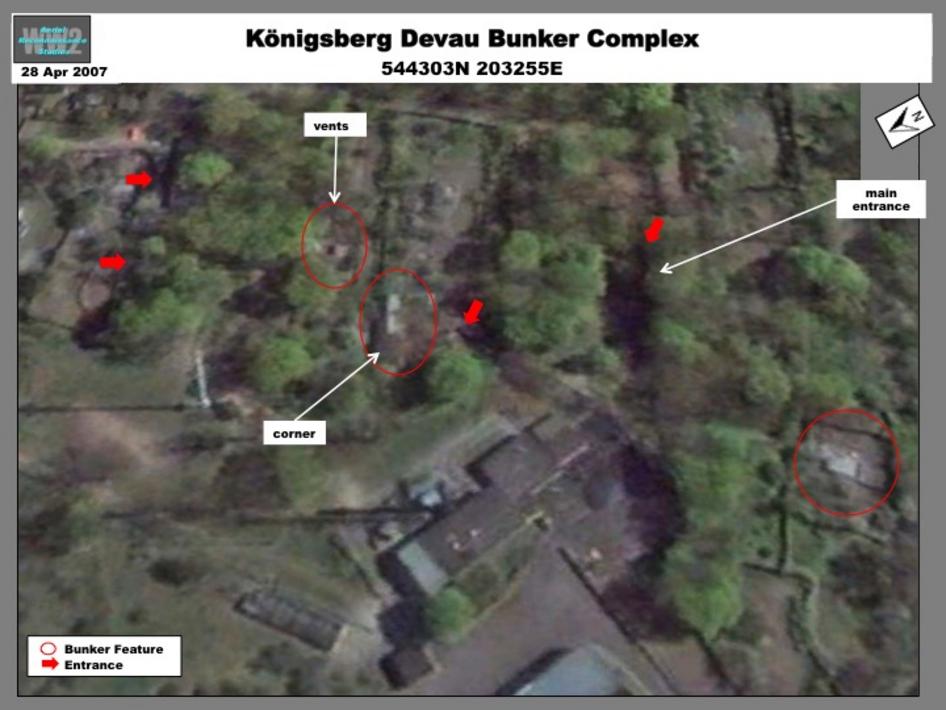 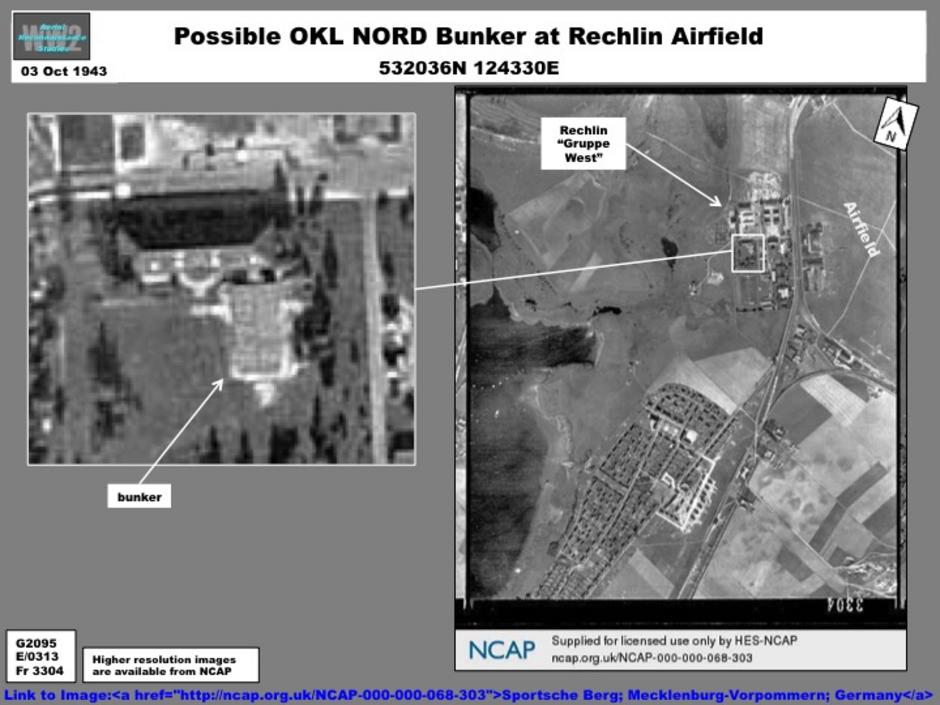 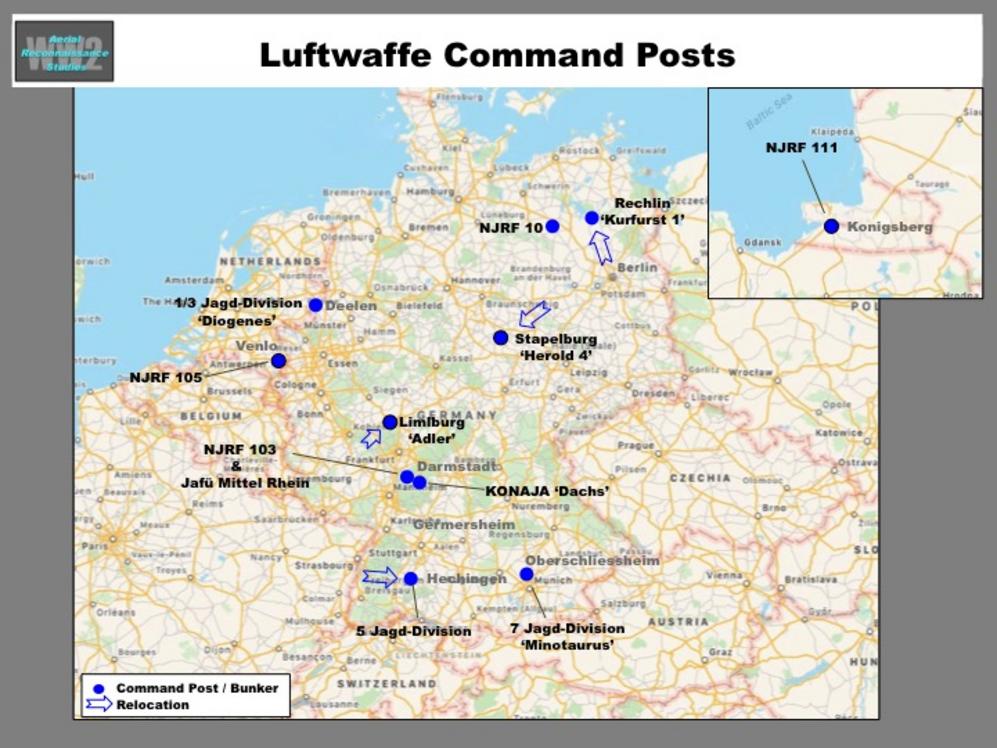 A similar bunker was built was built for 1 JD --later 3 JD-- at Deelen Netherlands (Graphic 10).  The command post , codenamed 'Diogenes', operated between January 1942 and September 1944, when it relocated to Wiedenbruck. Poor quality coverage on 18 August 1944 showed the location of the bunker.

According to Gyges, NJRF 103 operated between July 1942 through June 1944, when it was reorganized under Jafü Mittel Rhein. The bunker's reported location at Griesheim Airfield could be confirmed on the 1944 imagery coverage; it was located at the present site of a large building that was built sometime before 1953, when the airfield was occupied by the U. S. Army.  The bunker itself was a rectangular, partially above ground rectangular structure similar to others used by the Luftwaffe.  A U-shaped possible weapons position was on the roof. Another building and a possible underground machinery room were nearby (Graphic 1).