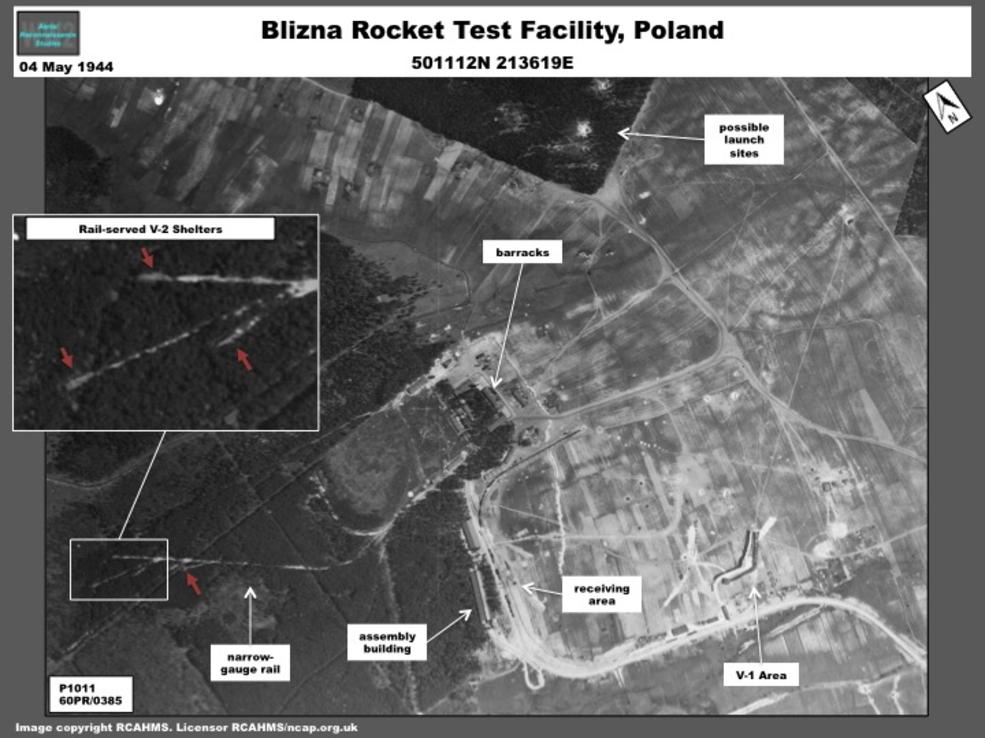 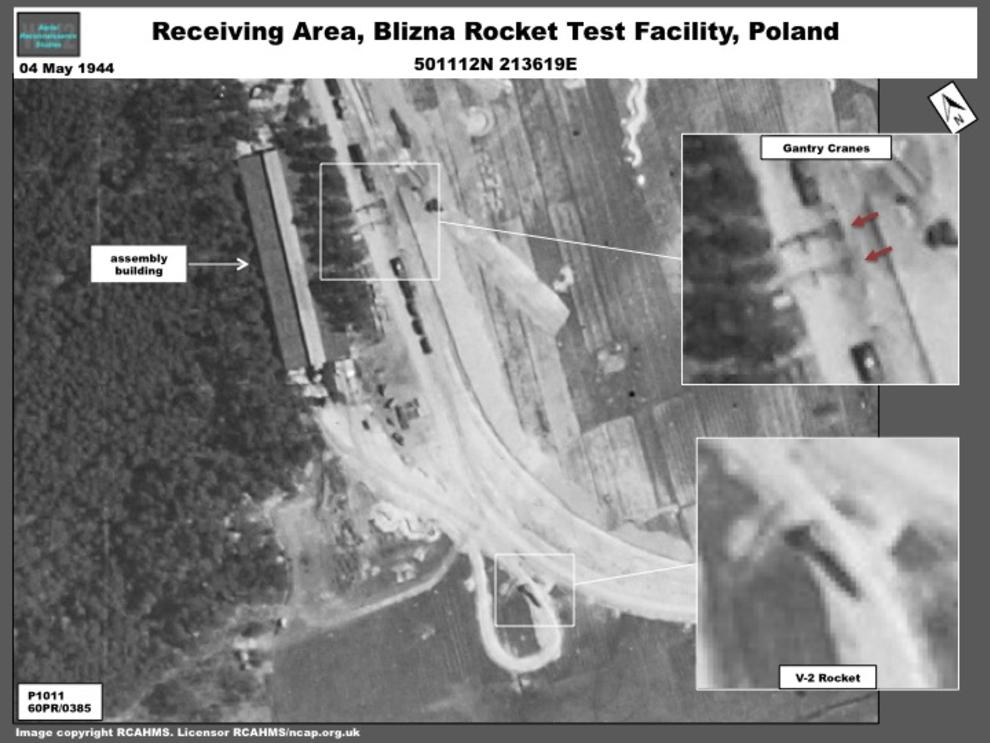 The forested area north of the facility was probably used for deployment and firing sites (Graphic 5).  Several clearings probably served as launch sites.  Five large and fairly recent craters (only two shown) were likely the result of launch failures.   Possible damaged or derelict equipment had been moved to the edge the forest in the midst of heavy vehicle trackage.

Possible launch preparations were observed at the site on subsequent coverage from the same sortie (not shown).  The V-2 on the loop road had been moved or had been net-covered and several vehicles vehicles, possibly including the two 'A-Stoff' transporters seen on the earlier coverage, appeared to be entering the forest near the probable sites. 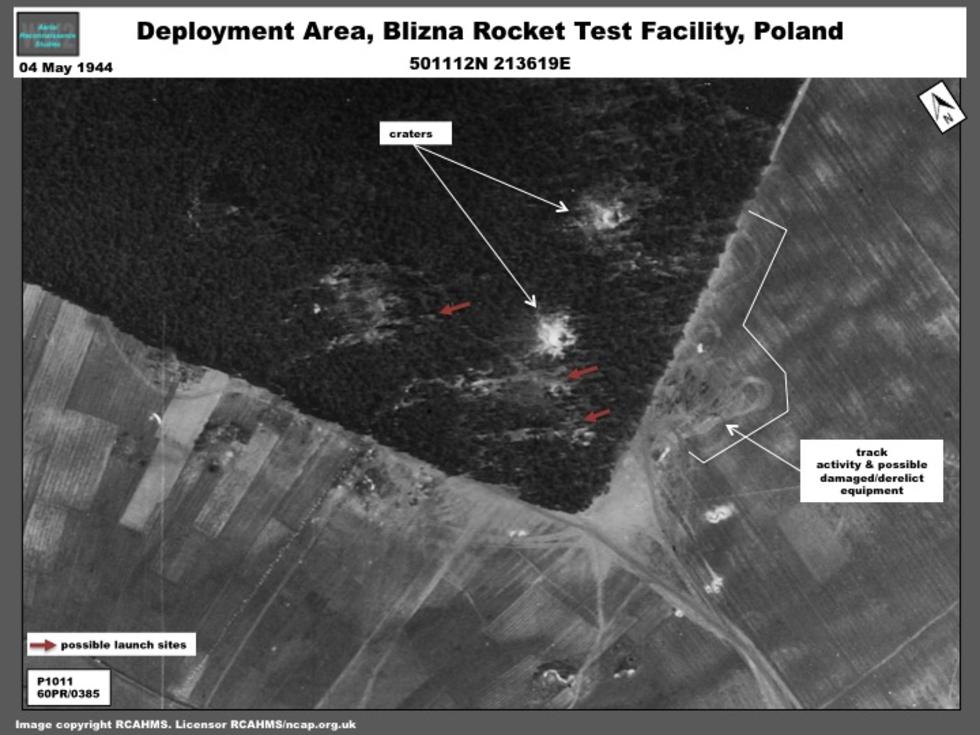 After the Peenemunde complex was bombed in mid-1943, V-weapons testing and training were partially relocated to Blizna in southeast Poland.  Between November 1943 and July 1944, 139 V-2 rockets and an undetermined number of V-1 flying bombs were launched from the new facility.  Three V-2's were launched from Blizna on 04 May 1944, the day the facility was covered by a South African reconnaissance sortie.

In comparison with the Peenemunde complex, Blizna was rudimentary, but had sufficient capability to support a high tempo of activity. Launches, using road transportable equipment, took place at field sites in the area. ​ Key facilities included a rail receiving area, a missile assembly building and an narrow-gauge rail system serving a ready storage area storage area with four sheds for assembled rockets (Graphic 1).  On 04 May, a V-2 rocket was parked in the open on a loop road in the assembly/receiving area and two transportable gantry cranes were erected over the rail tracks near the assembly building (Graphic 2).  Three probable 'A-Stoff' (liquid oxygen) tank cars and a long flatcar for possibly transporting V-2 airframes were parked further along the track (Graphic 3).  Two probable 'B-Stoff' (hydrazine) transporters were on a nearby road.

The large open area immediately east of the rail receiving area appeared to be used for V-1 launches, possible V-2 launch training, and possible storage of ground support equipment (Graphic 4).  The main V-1 site, flanked by two camouflage net-covered areas ending at a V-1-type check-out building, was no longer operational.  Unidentified objects, possibly sections of a dismantled launch ramp were at the opposite end of the site.  Another possile dismantled ramp was in the open immediately to the west; a small water reservoir, also associated with V-1 sites, was nearby.  The concrete pad in the center of the clearing was possibly used for V-2 launch training.   A bunkered building and equipment in several nearby revetments may have been used for viewing and monitoring launches. 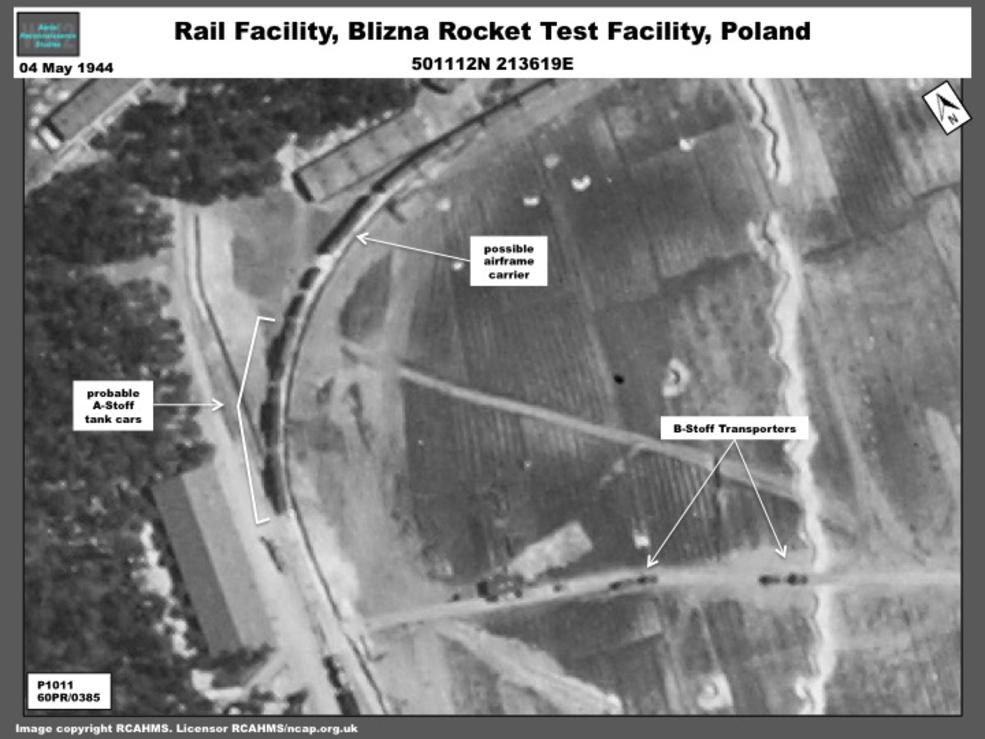 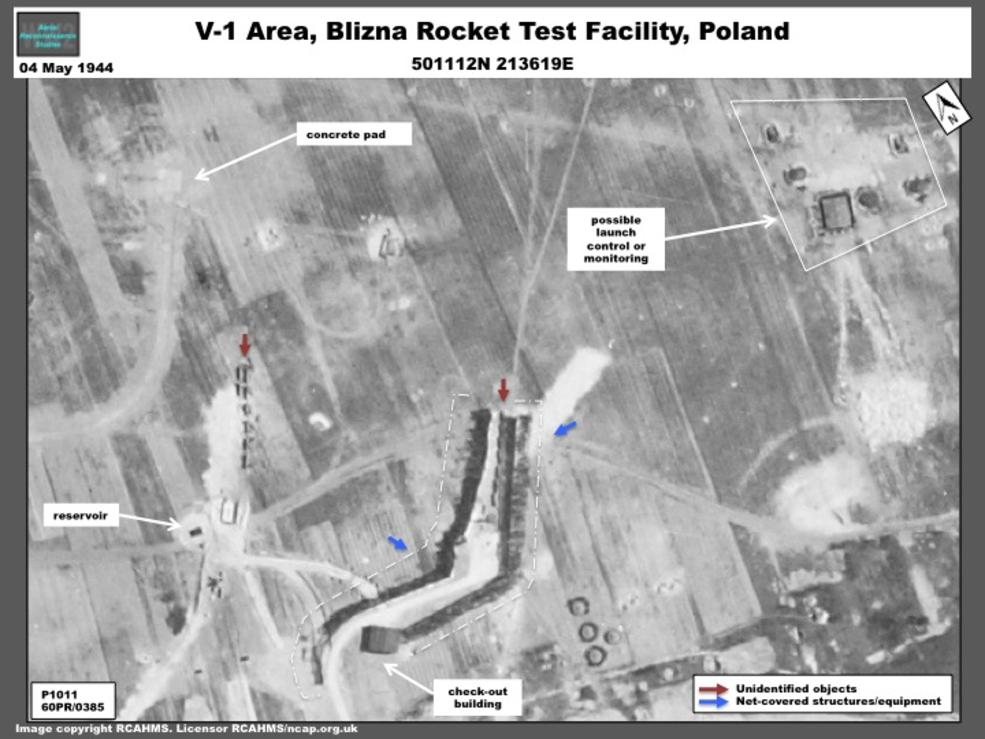