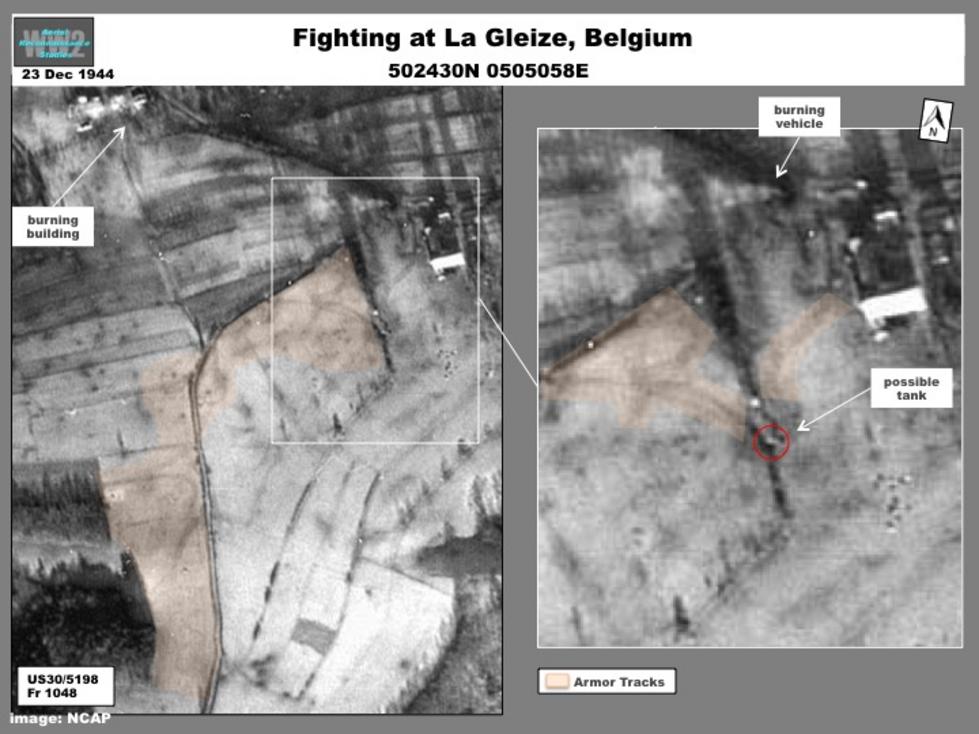 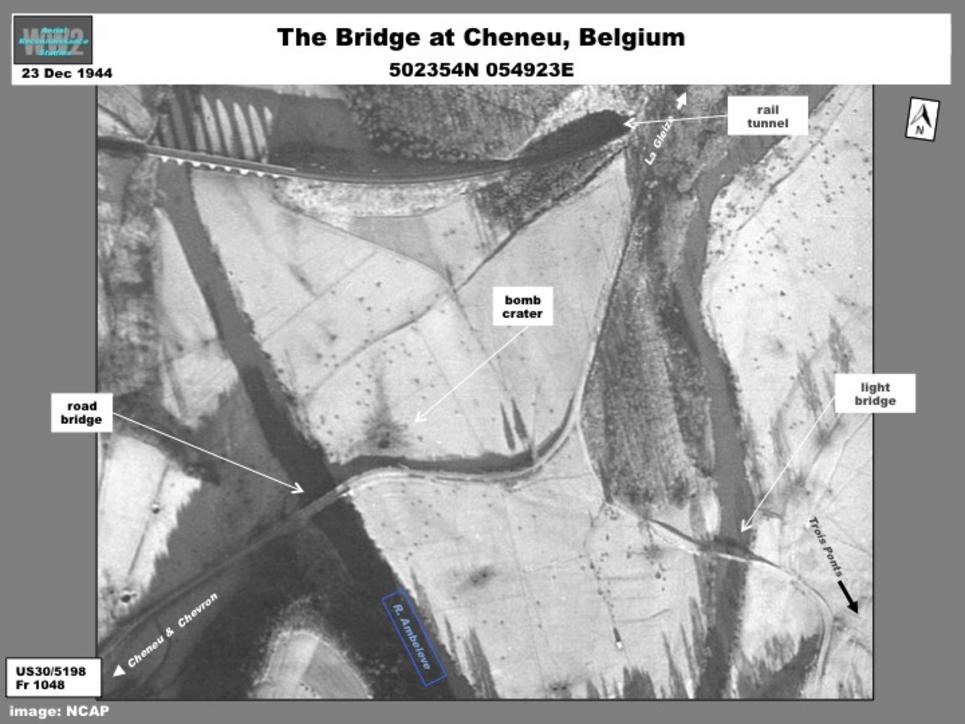 Clearing skies over the Ardennes on 23 December 1944 permitted USAAF reconnaissance over the area that had been penetrated by Kampfgruppe Peiper at the start of the Battle of the Bulge on 16 December.  Nearly the entire north flank of the Battle of the Bulge was imaged, including the pocket between Stoumont and La Gelize, where the kampfgruppe had been trapped by the U.S. 30th Infantry Division, 3rd Armor Division and 82 Airborne Division (Map 1-3 & Graphic 1).  Evidence of fighting could still be seen in La Gleize, the day before the kampfgruppe abandoned its positions. 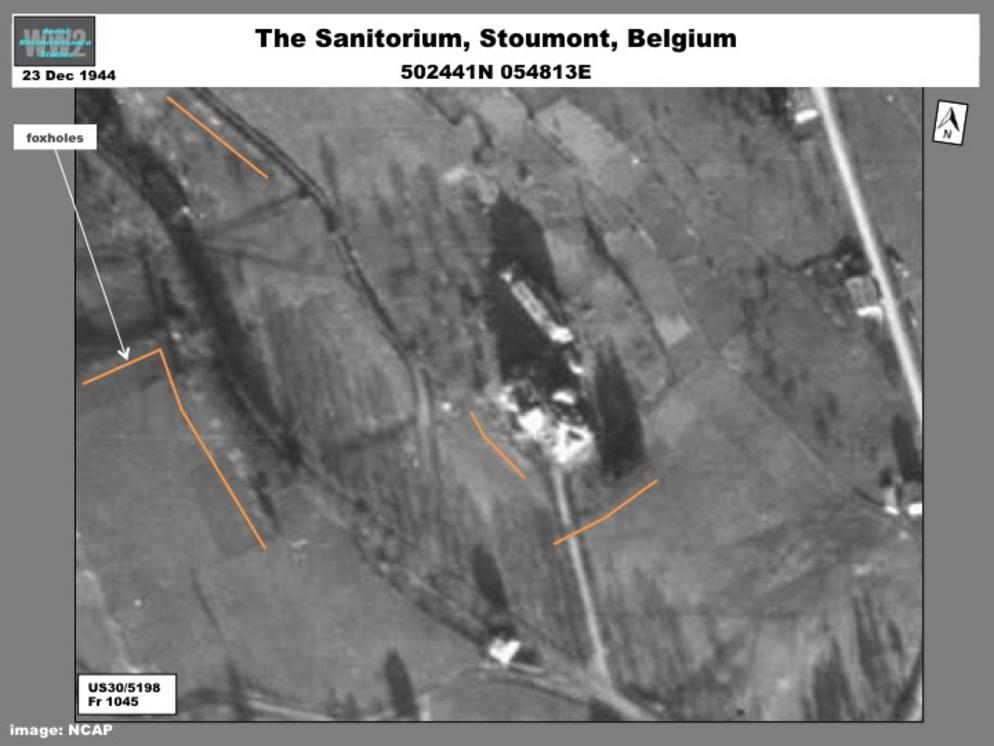 On its way to Stoumont on 18 December, the kampfgruppe found an intact bridge across the Ambeleve near the town of Cheneu(Cheneux).  After establishing a bridgehead, Peiper sent a detachment southwest to the vicinity of Chevron where a bridge over the Lienne Creek offered direct assess to Werbomont.  The bridge used by Peiper was still intact 23 December, despite evidence of bombing and artillery fire (Graphic 8, Map3). 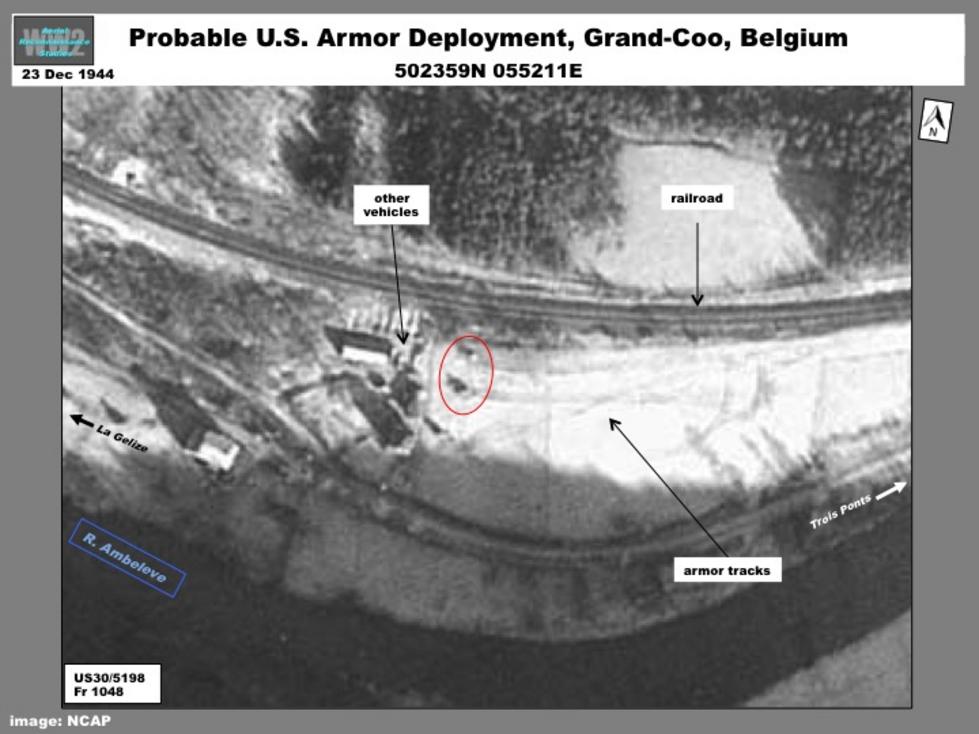 The effort to retake the Stumont began on 20 December, with thrusts from the west (119th Inf and 740th Tank Bn, 30th Inf Div), north and east (Task Force Lovelady, McGeorge and Jordan, 3rd AD ). The battle focused on a sanitorium (Graphic 2 & 3) at the west side of the town where, after initial success, the Ameicans were driven out. The Germans attempted a breakout to the west but he sanitorium was retaken on the 21st. That night the kampfgruppe withdrew east to La Gleize. By 23 December there was no evidence of fighting at Stoumomt, but artillery and bomb impacts and foxhole lines could be seen around the sanitorium (Map 3). 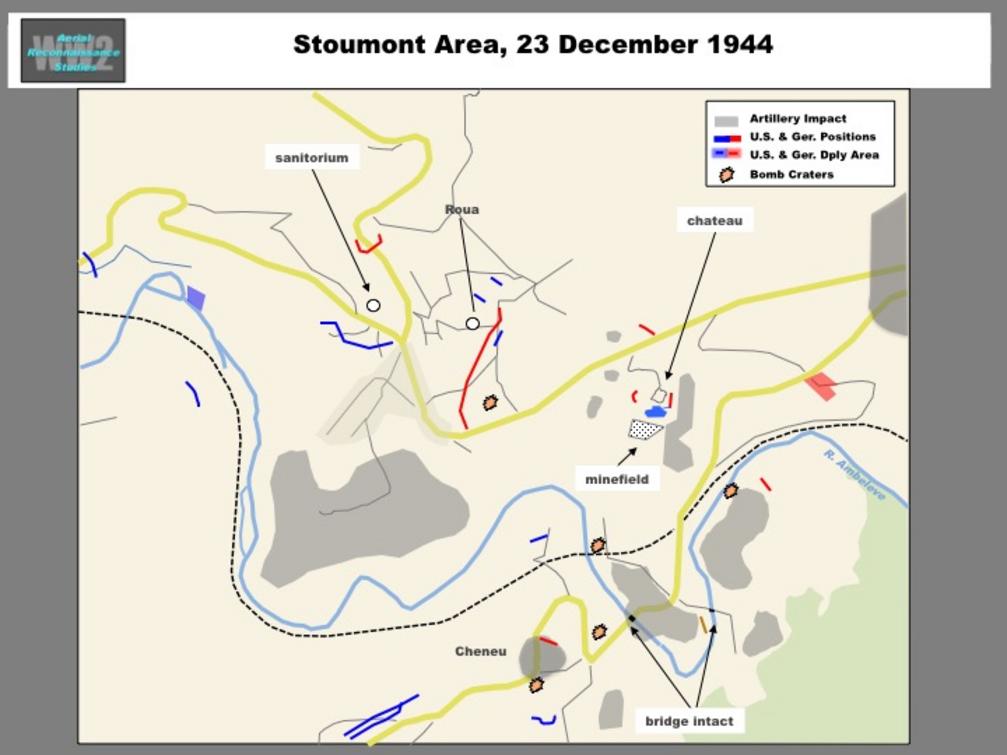 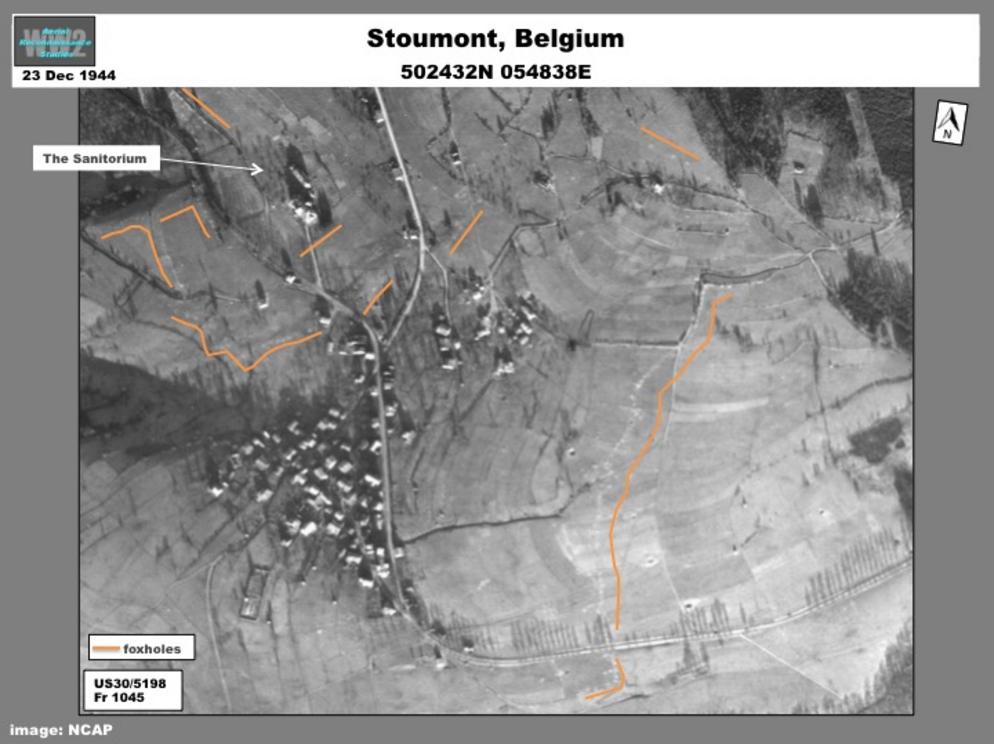 On 23 December, probable elements of Task Force Lovelady (CCB 3rd Armor Div) were deployed at a roadblock between Trois Ponts and La Gleize (Graphics 1 & 7).  The roadblock was one of three deployed along the road to keep reinforcements from reaching  the kampfgruppe. Prior to the coverage, this roadblock was cut off by German activity north and south. At least two armored vehicles were deployed in an open area and several others were parked within a group of buildings. 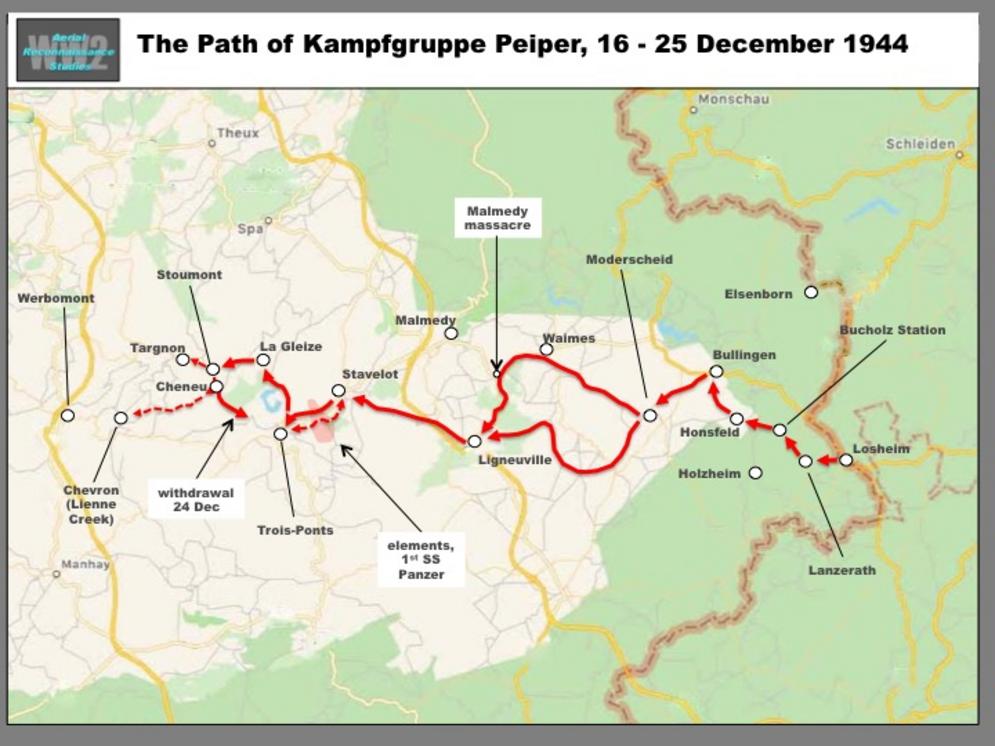 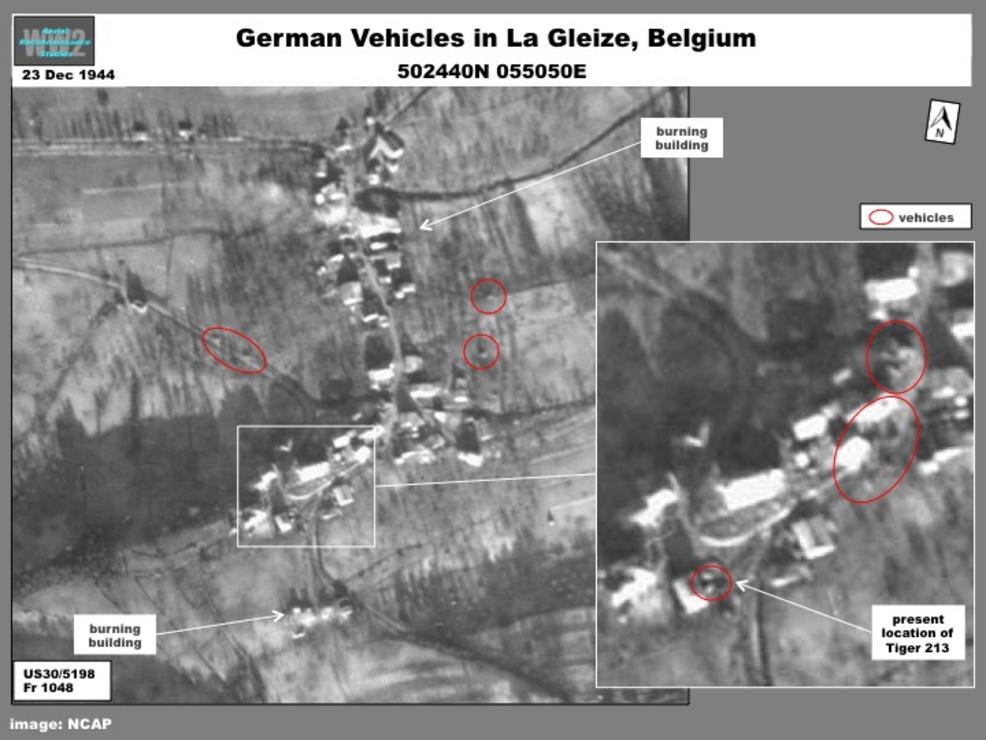 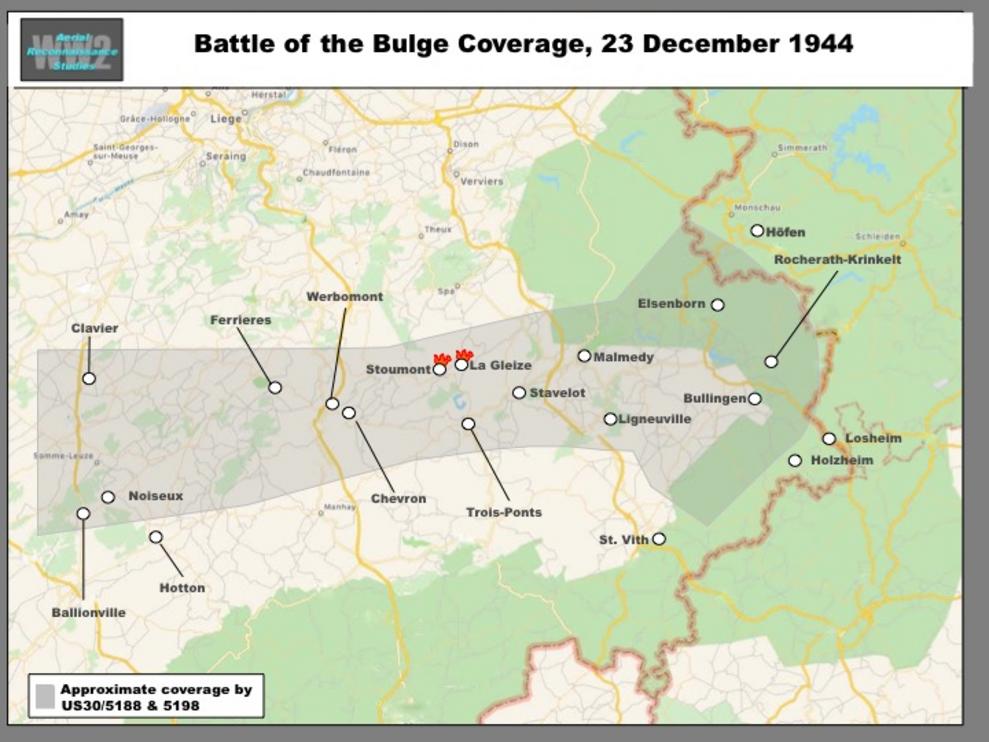 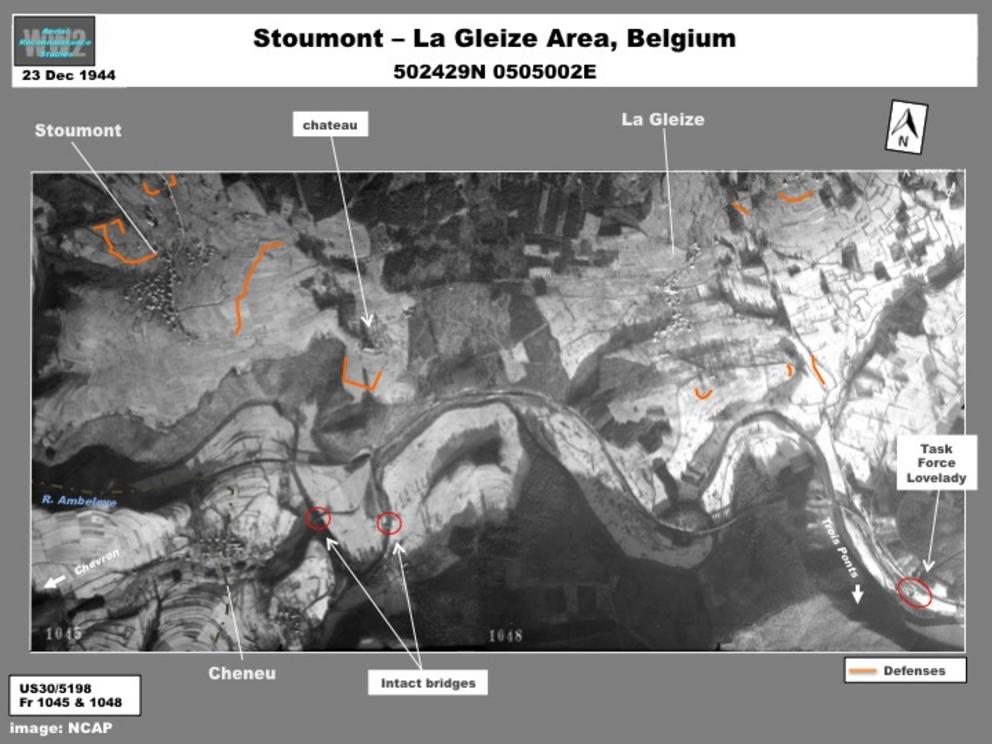 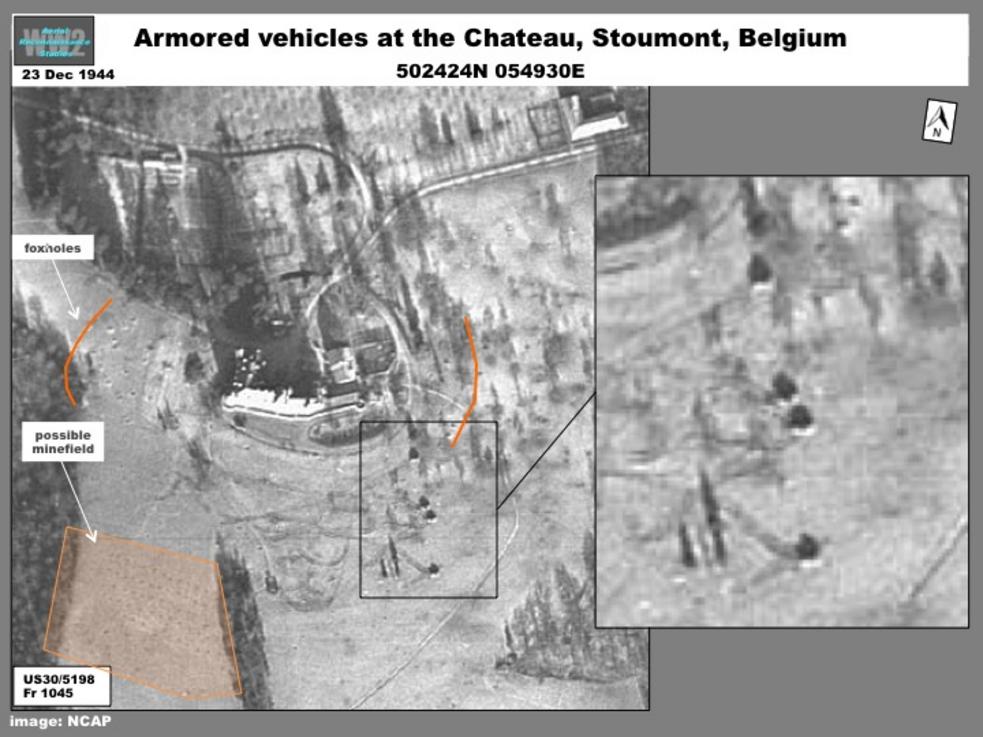 Evidence of fighting could be seen in La Gleize on 23 December (Graphic 5). Fires were burning in the town and a defensive area to the southeast.  At least 10 probable vehicles, including two near the present-day location of a Tiger tank ('Tiger 213'), were deployed in and around La Gelize.  South of town, a possible tank was at a hedgerow that formed part of a defensive area (Graphic 6). The defensive area appeared to have been under attack from the southwest where heavy armored vehicle trackage could be seen coming from the forest.

While deployed at Stumont the Germans held positions at  Froicourt Château on a hiil overlooking the Amblève valley.  On 23 December, four tracked vehicles were deployed in a line southeast of the château and vehicle trackage indicated heavy maneuvering. It is not clear if these were abandoned German vehicles or from one of the U.S. Task Forces (Graphic 4).  A probable minefield had been deployed on the slope southwest of the château and foxholes could be seen around the building.