The focus of the reconnaissance sortie appeared to be the westernmost part of the German incursion where evidence of fighting was could be seen near Hotton and Marche. Three probable American armored vehicles were dug in west of Hotton where artillery cratering could be seen and smoke was rising from a building in the town; a row of foxholes marked possible German positions (Graphic 5)

More German positions, including two anti-aircraft sites, could be seen south of the front lines.  A light anti-aircraft battery was deployed  at Lignieres, about 7 km to the southeast (Graphic 8) while a medium battery apparently had just been set up near Mormont, about 12 km to the southwest (Graphic 9). The battery's prime movered were parked in the forest nearby. 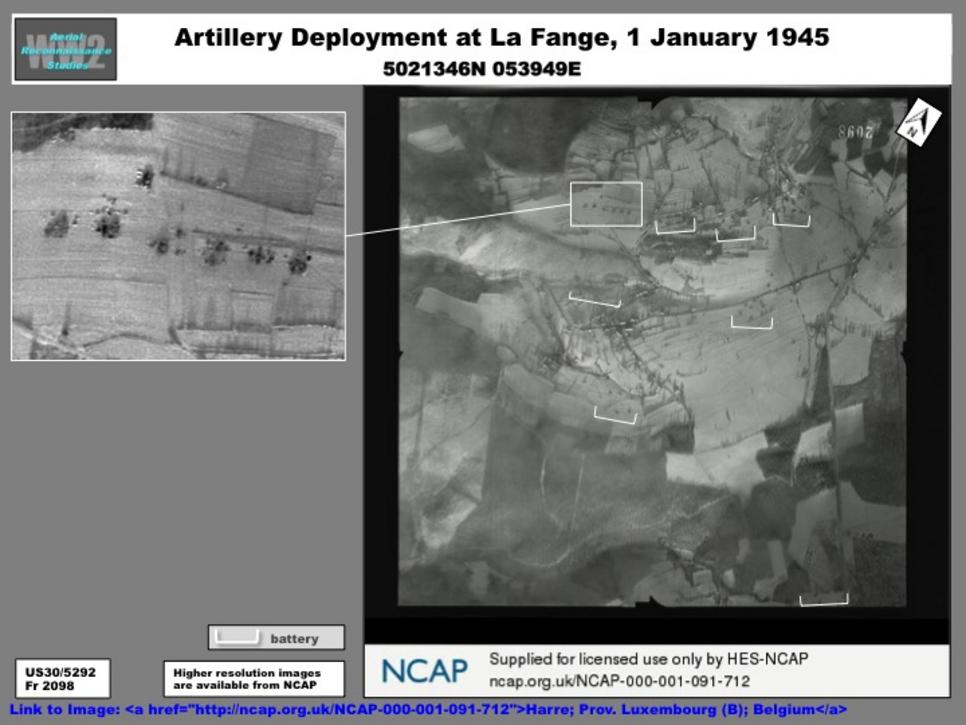 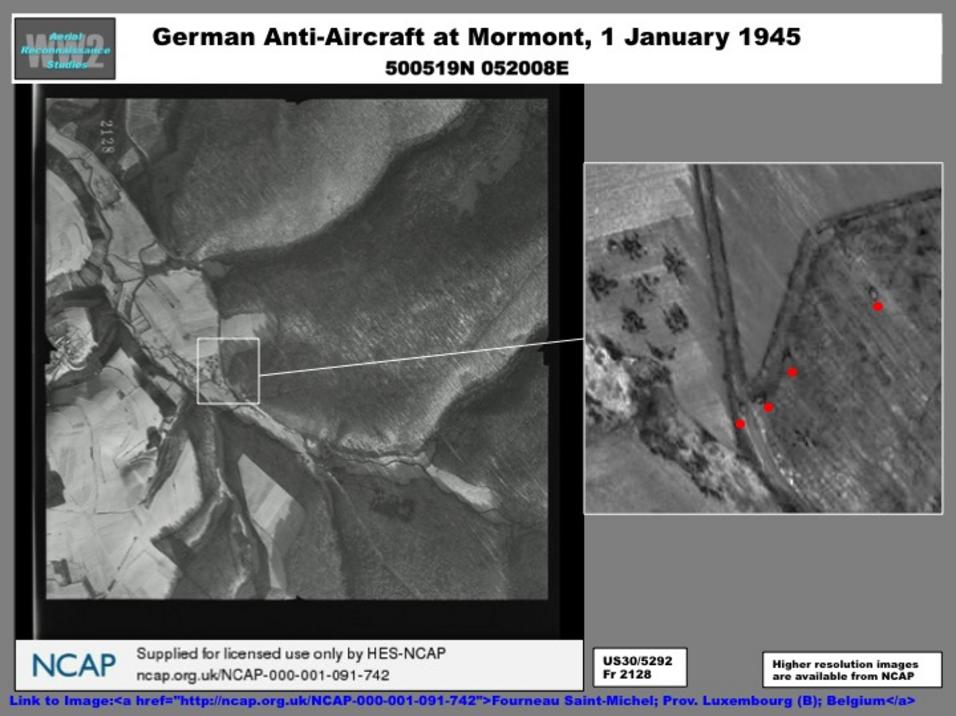 German positions south of Marche, Hotton and Soy were marked by evidence of heavy bombardment.  South of Marche, a long line of foxholes showed the enemy lines; two German armored vehicles were deployed in revetments immediately in front of the line (Graphic 6).  The site of a probable German Nebelwerfer or mortar position was immediately southwest of the armor positions; despite signs of recent fire, the equipment had probably been moved (Graphic 7).  Evidence of German positions further to the rear were also identified. 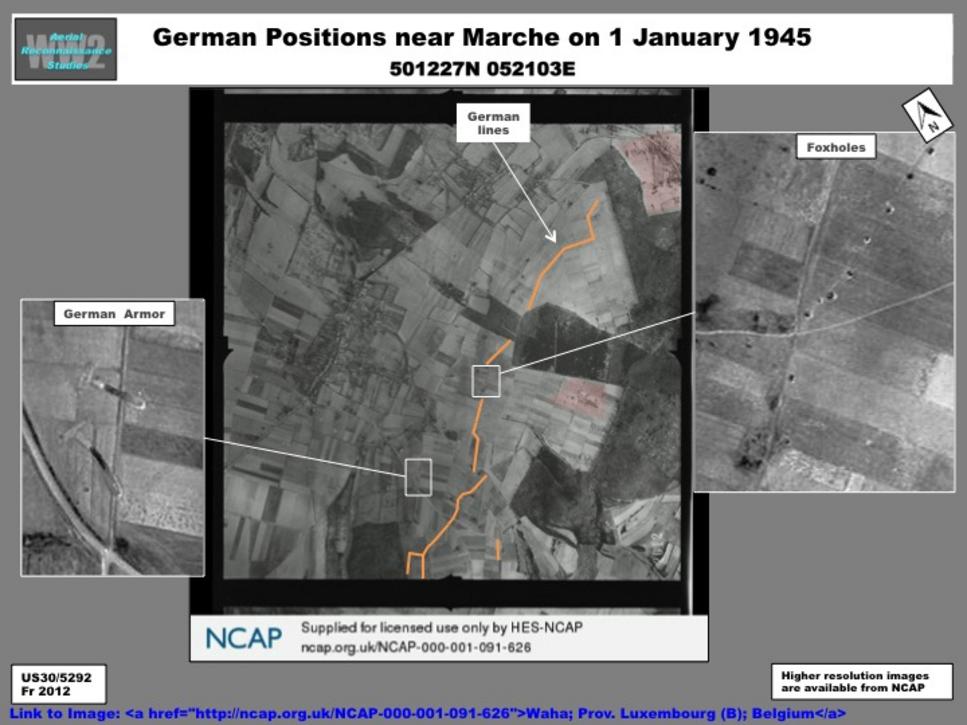 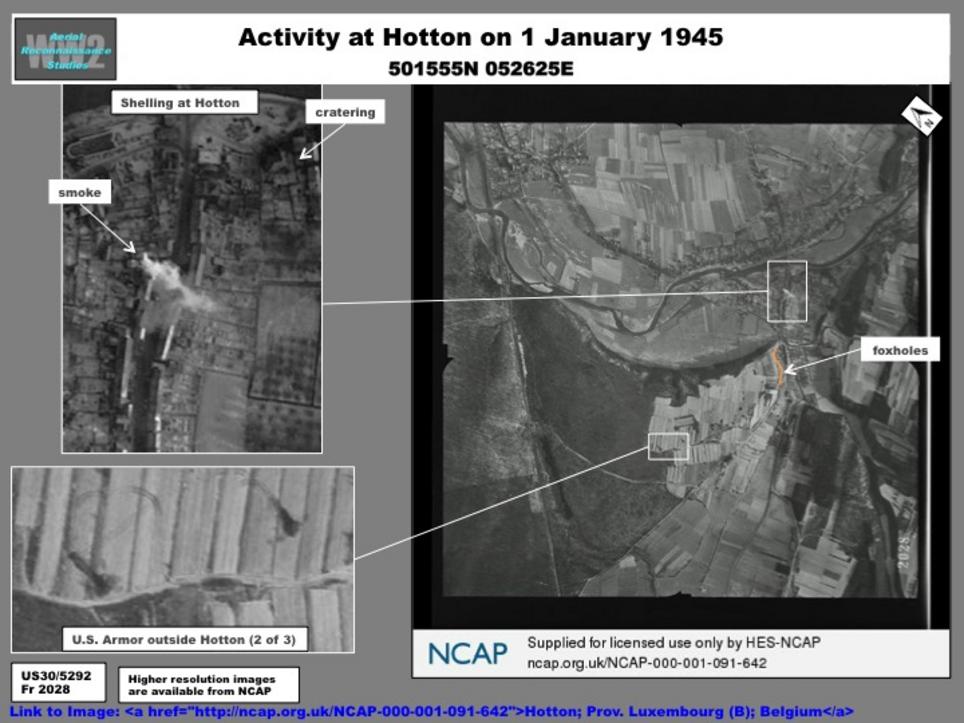 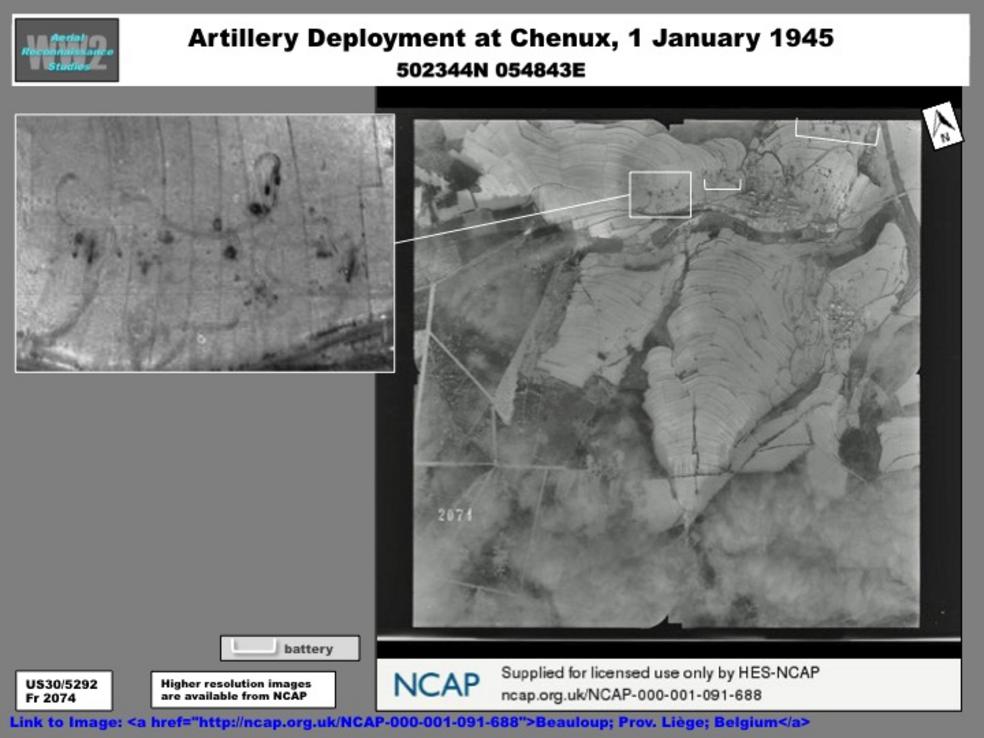 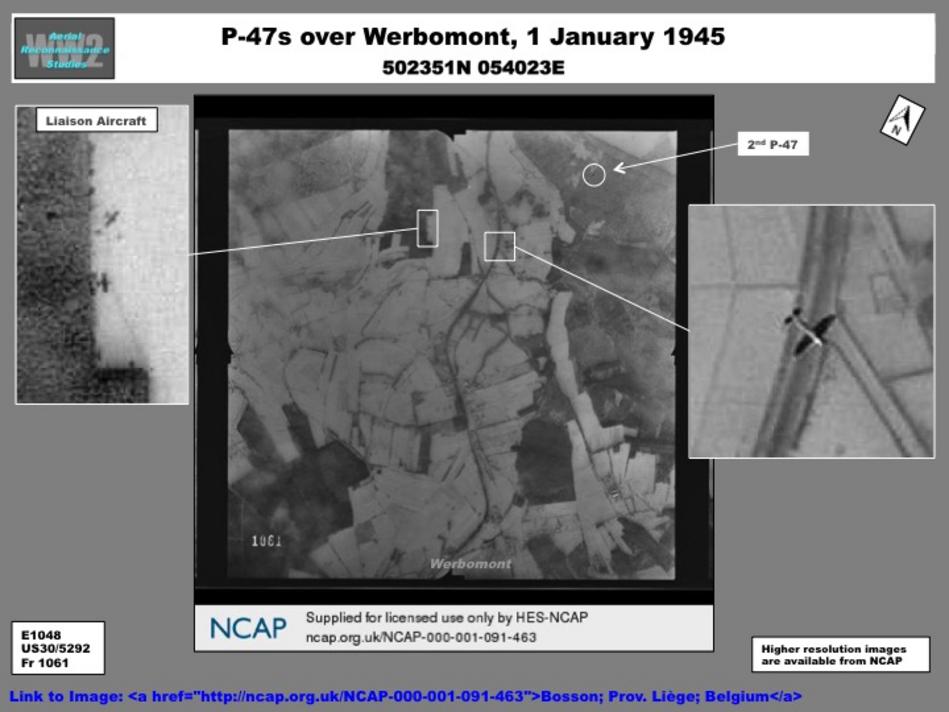 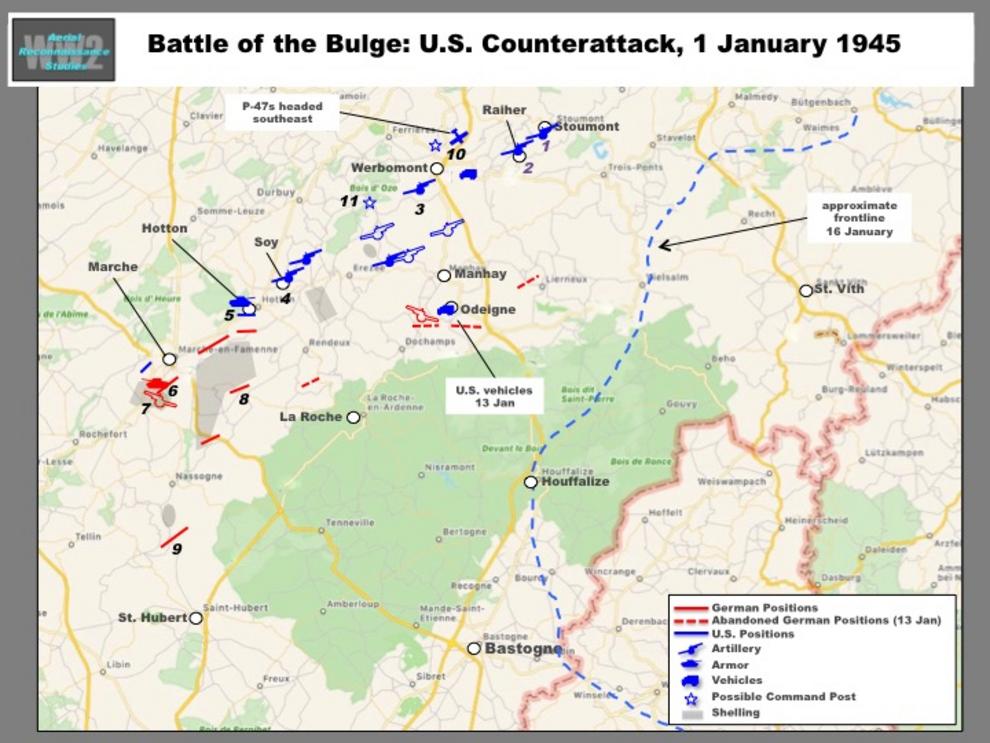 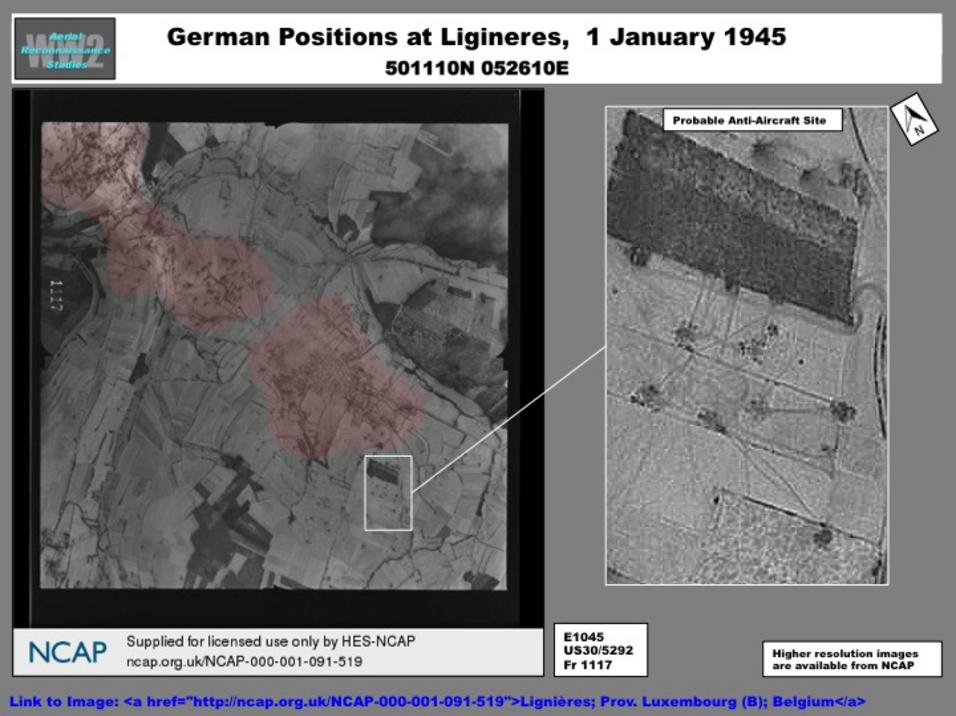 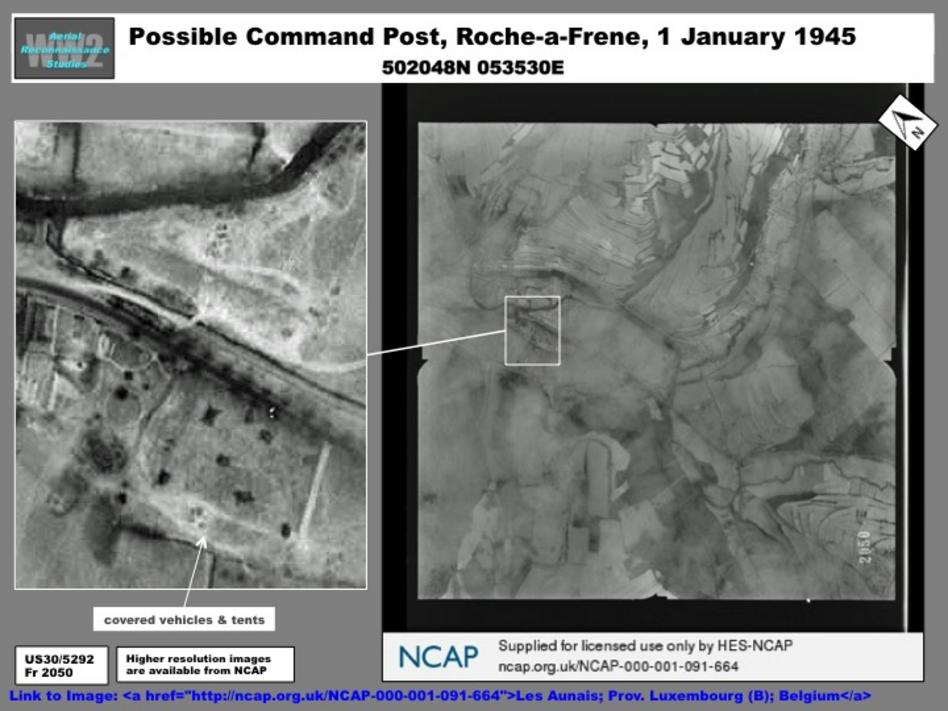 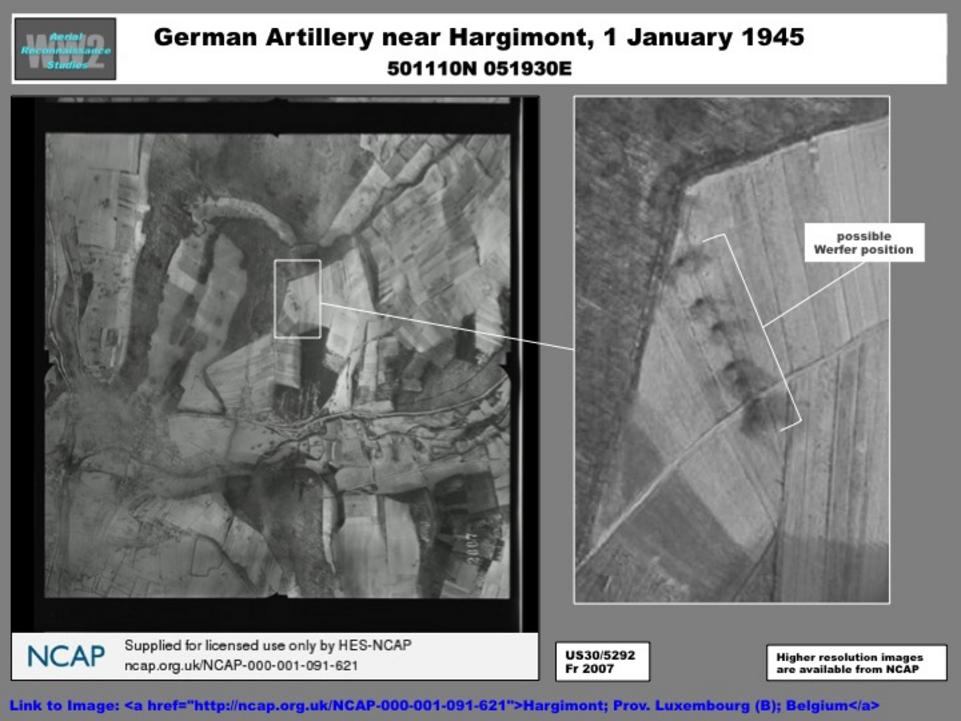 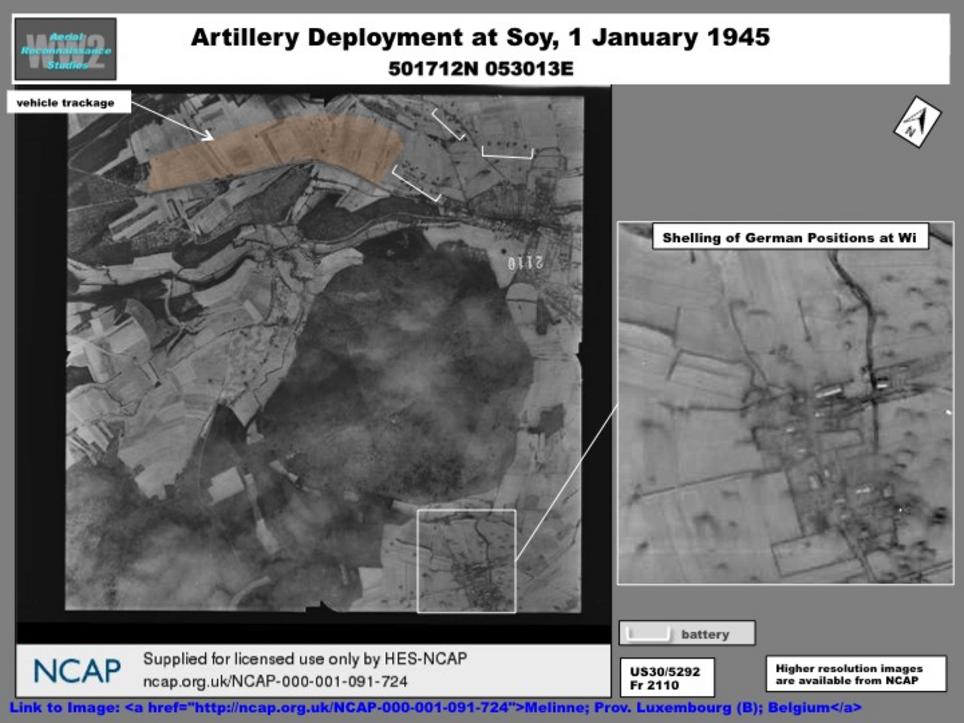 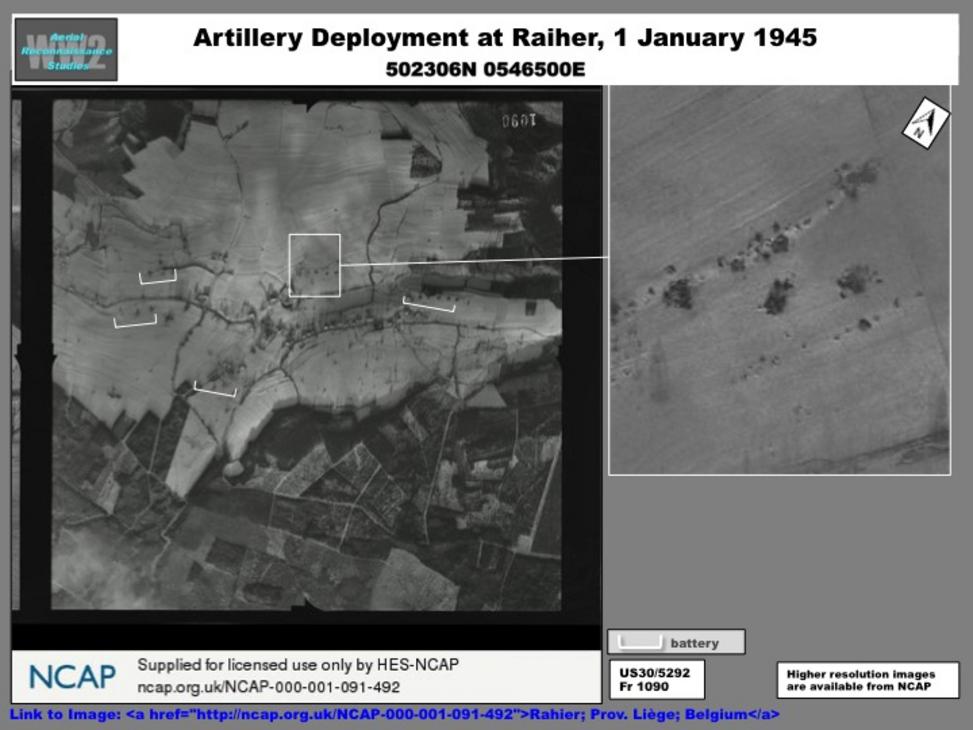 U.S. Army artillery played a major role in turning the tide of battle. The weight of artillery deployed along the north shoulder of the German incursion was clear on 1 January, when at least six groupings (up to 24 batteries)-- including both towed and self-propelled guns-- were identified along the front between Stoumont and Soy (Graphics 1 - 4).  Artillery sites northwest of Manhay appeared to have been vacated in the recent past. Two thousand meters south of Soy, evidence of Ameican shelling could be seen at the village of Wi (Graphic 4).

The Map below shows American and German positions as determined from a single USAAF reconnaissance sortie from 1 January 1945.

The U.S. Army counterattack against German forces during the Battle of the Bulge began shortly after the beleagured 101st Airborne Division at Bastogne (see The Battle of Bastogne, 26 & 27 December 1944)  was relieved by the 4th Armored Division late on 26 December 1944.  Imagery from 1 January 1945 showed evidence of  fighting along the northern and western boundaries of the German incursion where both American and German positions could be identified. The U.S Army had deployed significant artillery assets all along the northern shoulder.  Evidence of heavy shelling of German positions between Hotton and Marche en Famenne (Marche) could be seen.  Also noted was a flight of four IX Fighter Command P-47s heading for German positions as well as the locations of two possible U.S command posts.

The command post of XVIII Airborne Corps was located in the vicinity of Werbomont, where a large number of vehicles, artillery batteries and a field hospital were seen on 24 December.  Some of the vehicles were likely from the artillery units deployed south of the town on 1 January, but artillery positions and the hospital were no longer present.  While evidence of the U.S. Army presence in Werbomont had decreased, two liaison aircraft parked in a field north of the town probably marked the landing area area for Corps command post (Graphic 10).  A flight of four IX Fighter Command P-47s were heading southeast over the area.  Elsewhere, a possible command post site with a number of vehicles, tents and net-covered areas was deployed at Roche-en-Frene within an artillery complex(Graphic 11), suggesting that it was occupied by an artillery unit.