The Scene at Bastogne on 27 December 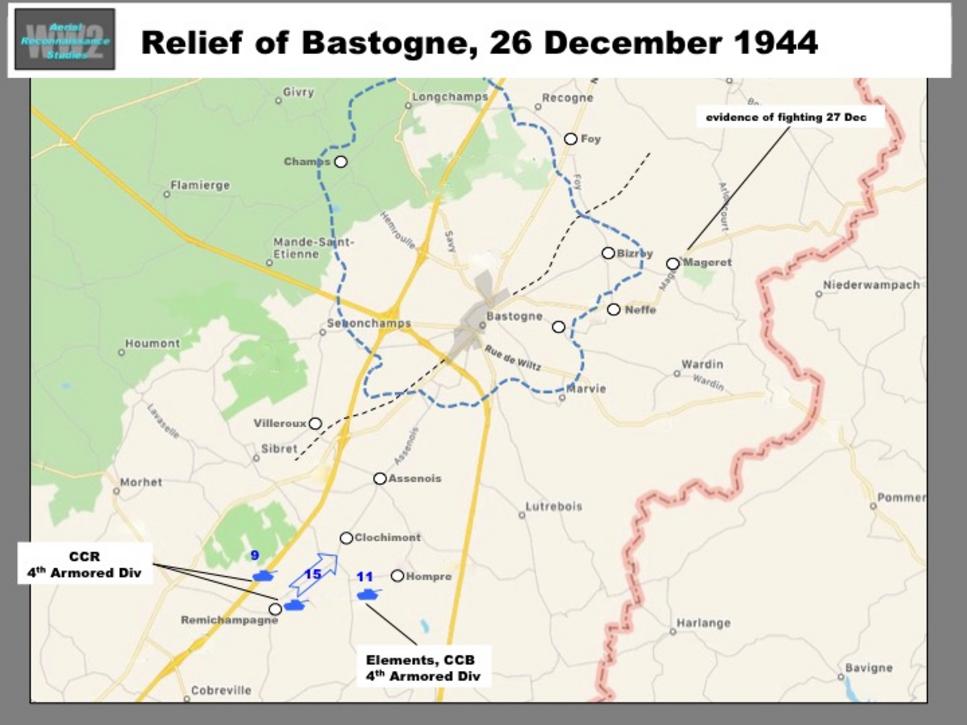 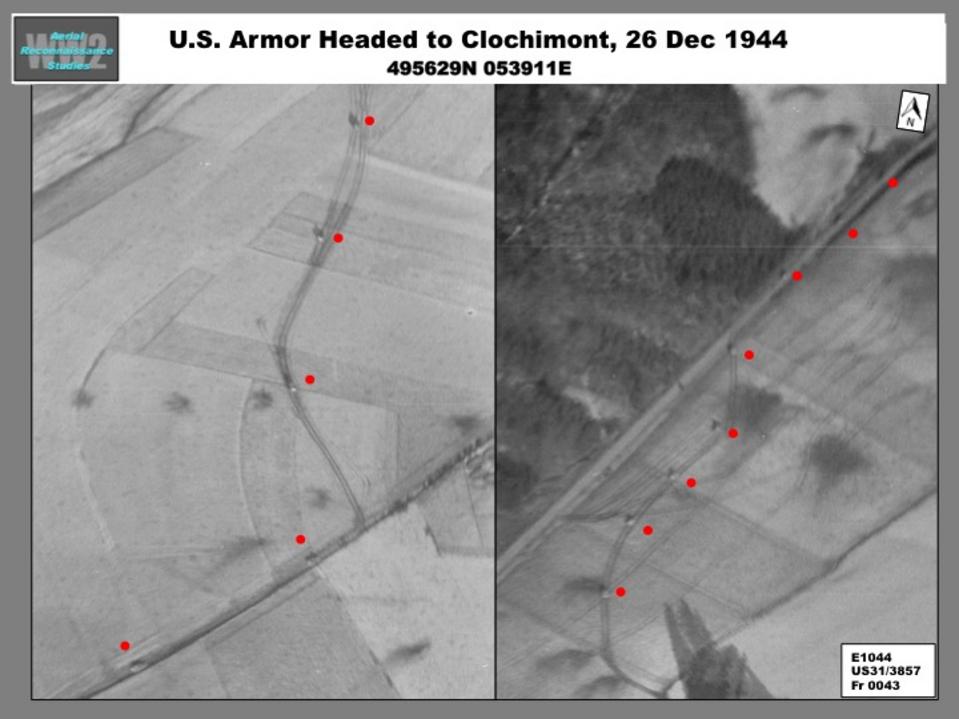 A high level of activity was observed in and around Bastogne, especially in the vicinity of the barracks at the north edge of town -- also the site of 101st Airborne Division command post (Graphic 9).  Approximately 20 vehicles lined up outside the gate may have been some of those that arrived in the early morning hours.

Another group of armored vehicles 1100 meters southwest of Hompré probably belonged to CCB.  The 11 vehicles  were deployed in a screening formation similar to those at Remichampagne (Map 1, Graphic 5). 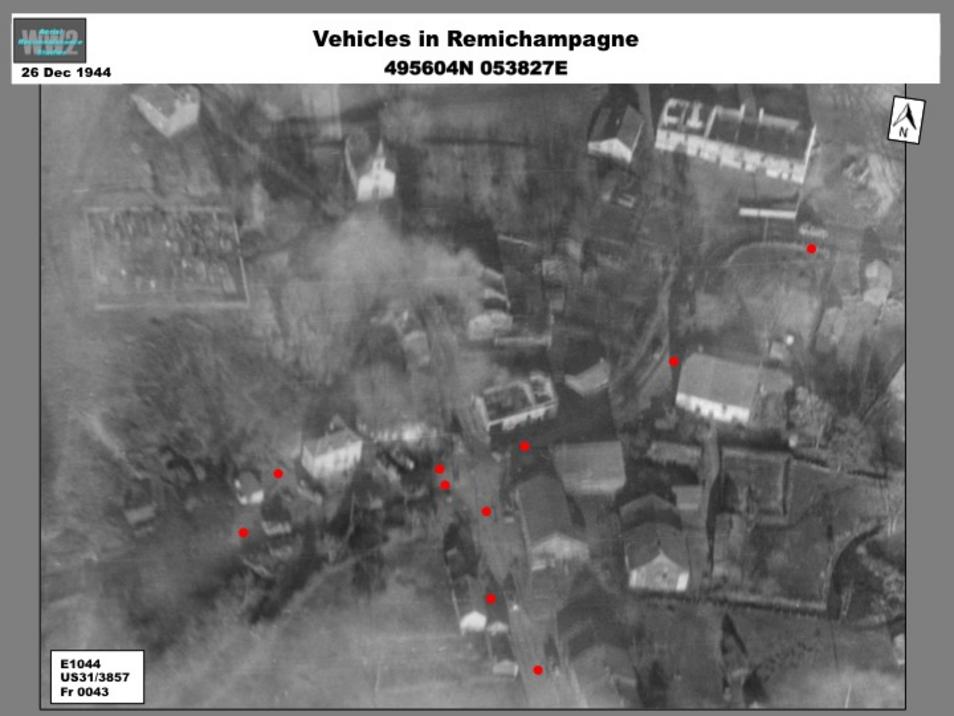 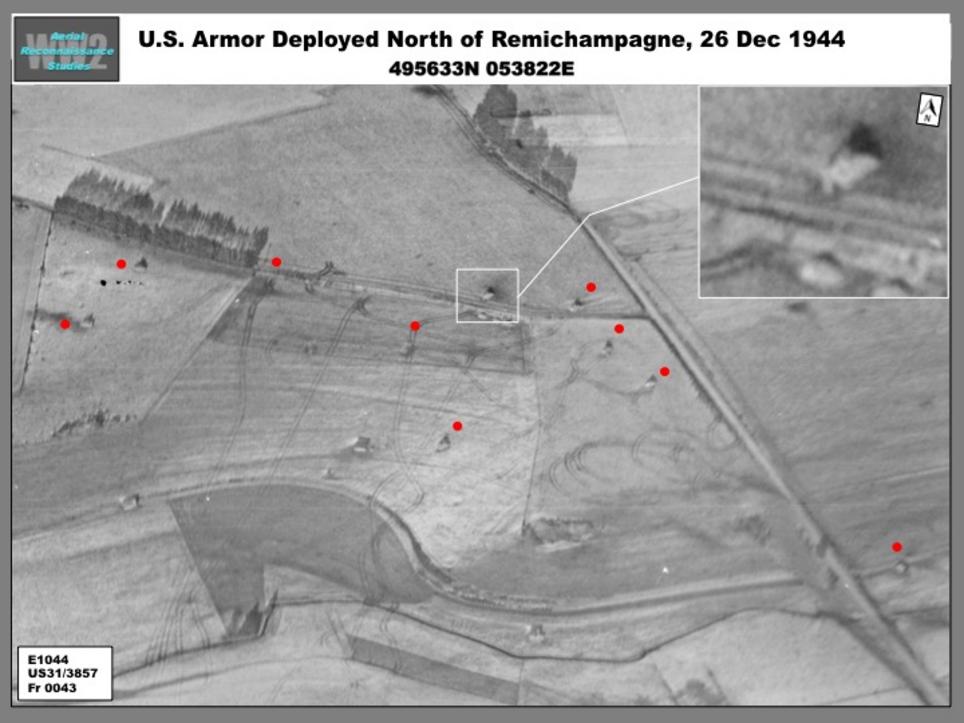 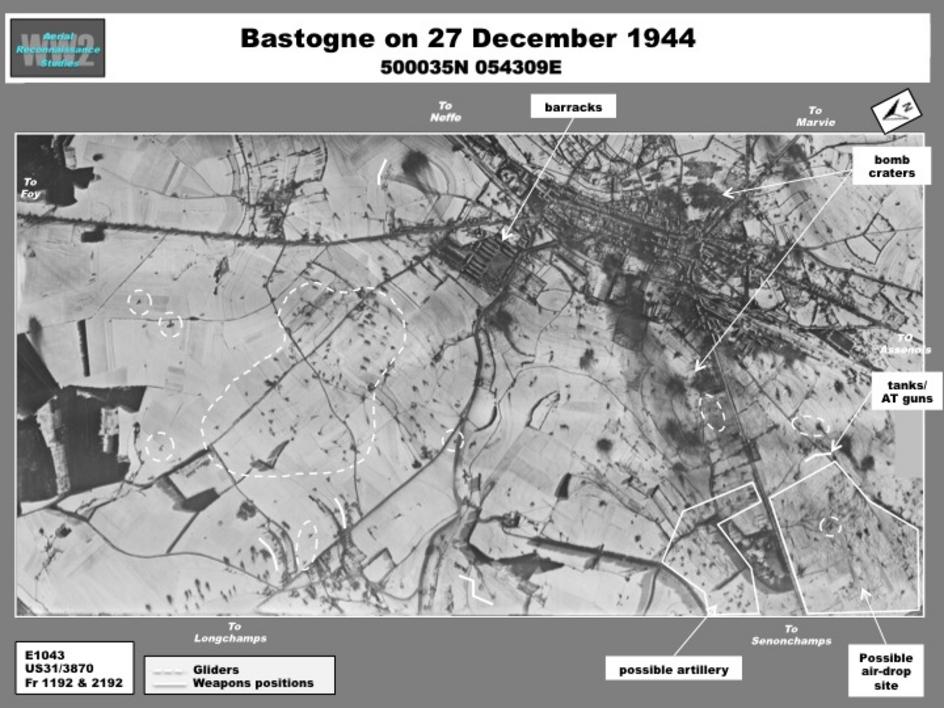 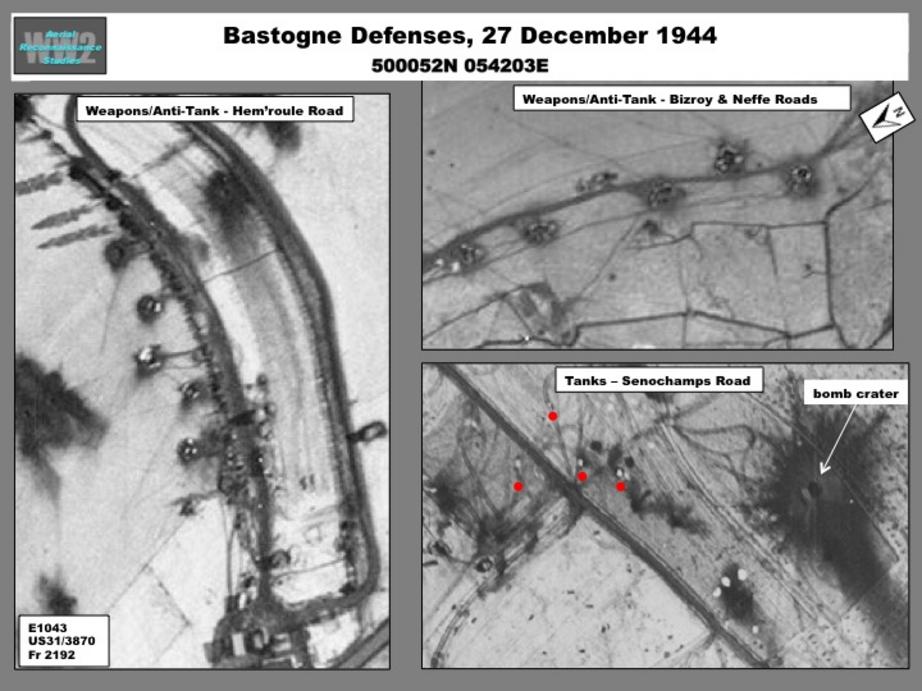 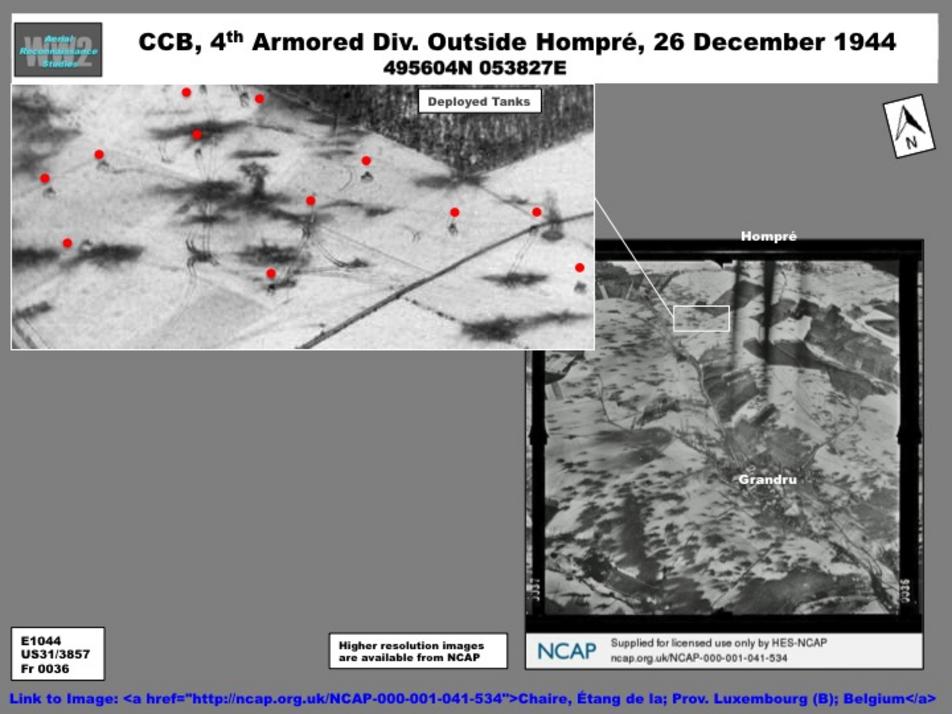 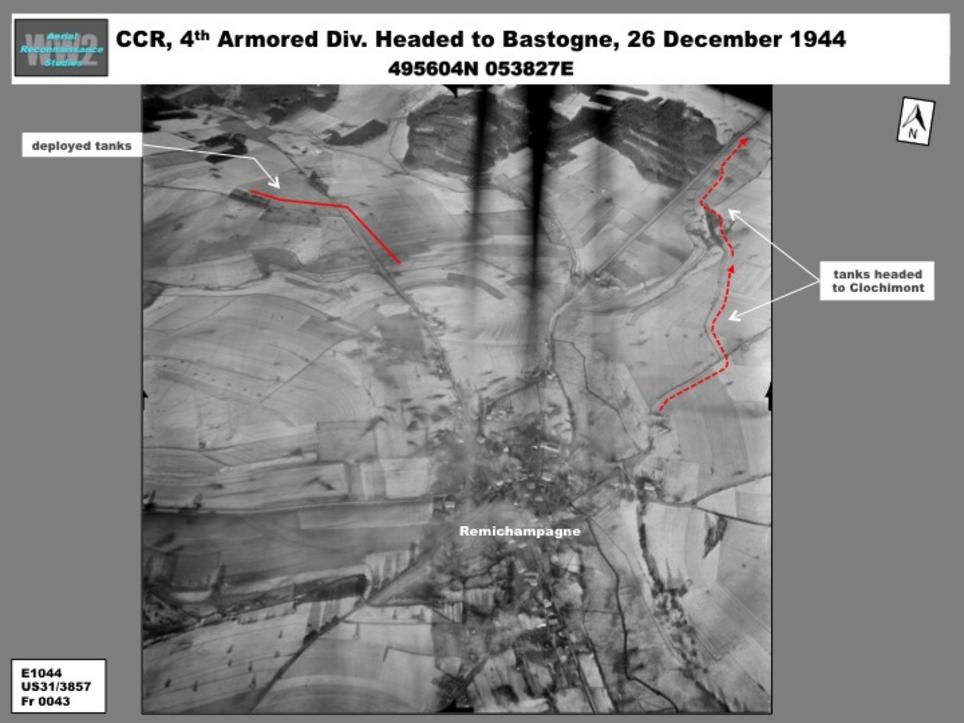 Coverage of Bastogne on 27 December showed activity related to defenses and a recent resupply by air (Map 2, Graphic 6).  The effects of Luftwaffe bombing from 24 December could still be seen. The imagery was taken just after the arrival of 32 CG-4A cargo gliders that took place on the 27th (Graphics 7 & 8).  Skid marks made by many the aircraft were still visible and vehicles could be seen near some of them.  Most of the gliders were grouped north of the town, but a few were in a separate area to the west (a total of 38 gliders were counted; the additional aircraft were probably from an earlier flight.  An area along the Senonchamps road with  extensive vehicle tracking may have been the site of an air-drop on 24 December. 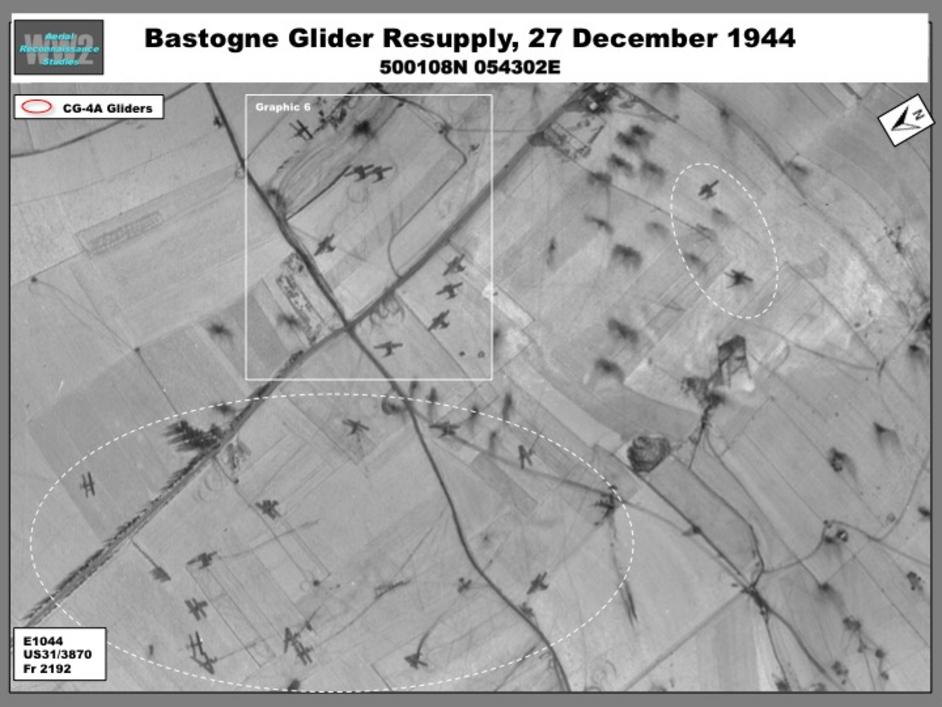 The town of Bastogne, defended by the 101st Airborne Division, was encircled by 20 December 1944.  On 27 December --the day the siege was lifted-- the garrison was imaged by USAAF reconnaissance showing defenses, resupply and evidence of Luftwaffe bombing. More interestingly, a low-level sortie flown the previous day captured the moment when elements of the American 4th Armored Division (3rd Army) at Remichampagne began the push to open a corridor to the beseiged town. Information in this article comes from The Ardennes: Battle of the Bulge published by the U.S.Army (1).

The Bastogne eastern perimeter was defined in some places by foxholes and weapons positions (Graphics 11 & 12).  Five tanks or anti-tank guns armored vehicles were deployed west of Marvie; these were probably part of the defensive perimeter, but the vehicles could have been part of a counter offensive that began with the arrival of the 4th Armored and three other armored divisinons (6th, 9th, 11th).  The only actual evidence of fighting was smoke rising from a burning building in Magaret, a key early objective.  Evidence of German armor movements could be seen outside Neffe. 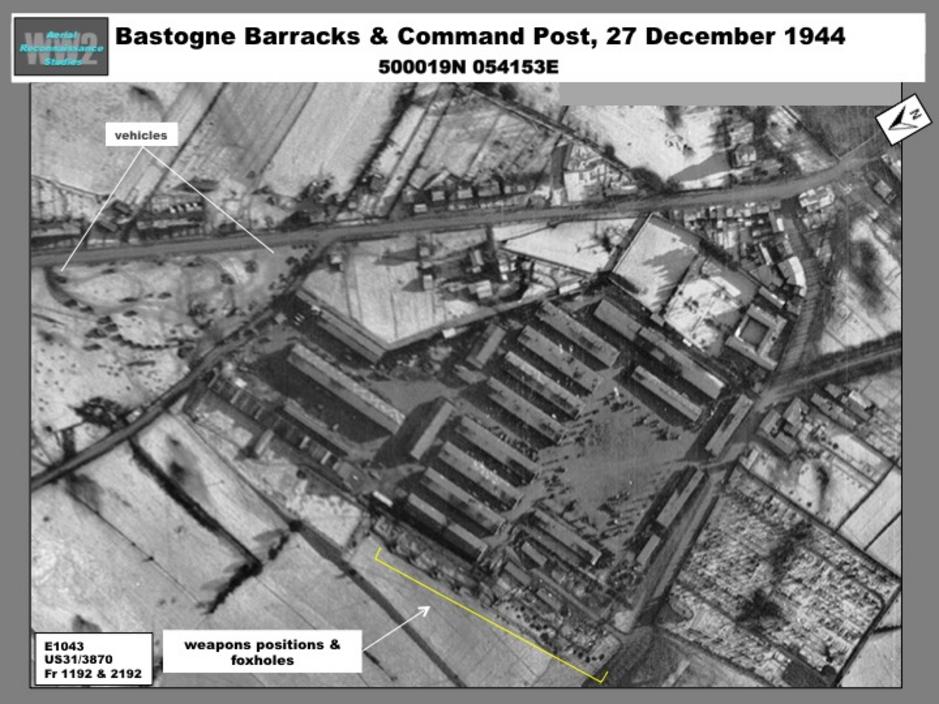 Bastogne was defended by elements of the 101st Airborne (501st, 502nd, 506th Infantry Battalions, 327th Glider Infantry Battalion & 326th Engineer battalion). Elements of the 101st were spread around the defensive perimeter, but the weight of the defenses faced east.  Available anti-tank and heavy weapons were deployed at major access points. Unfortunately much of the defensive perimeter was not imaged on 27 December, but two of three weapons sites and one possible tank or anti-tank deployment were most likely part of the reserve or inner defense line (Graphic 10).

The 4th Armored Division, operating in three combat commands --CCA, CCB and CCR (reserve)--  received the mission to open a corridor to Bastogne from the south. Starting along the Arlons-Bastogne road on 21 December, CCA and CCB were delayed by German resistance and destroyed bridges and by 26 December were stopped at the villages of Warnach and Hompré, respectively (Map 1). With the the two combat commands halted on the planned axis of attack, CCR on Christmas night was sent west on secondary roads through Remichampagne and Clochimont; from there it was intended to swing west to Sibert and then northeast on to Bastogne.  By the time it was committed, CCR --comprised of the 37th Tank Battalion, 53rd Armored Infantry Battalion and 94th Armored Artillery Battalion (deployed south of Cobreville)-- had only 20 Sherman tanks and about 230 infantry.  The units made it through Remichamps (assisted by airstrikes) and Clochimont, but ran into resistance at the next village, Assenois.  While the fighting was going on, the commander of the commander of the 53rd, LTC Creighton Abrams, elected to take a small element around Assenois straight into Bastogne leaving the rest of the command finish taking the village.  Abrams' detachment, consisting of five Shermans and one half-track arrived at Bastogne at 1650 on 26 December.  Resupply of the garrison began during the night and the the narrow relief corridor was quickly widened by the 6th, 9th and 11th Armored Divisions.

A group of artillery positions possibly occupied by the 420th Armored Artillery were identified on the Senochamps road 1.4 km west of Bastogne (Graphic 13). Nine of the positions appeard to be active.

Artillery was key part of the Bastogne defense. The 101st Airborne's organic artillery --105mm and pack howitzers-- was supplemented by four other artillery units: the 58th and 420th Armored Artillery Battalions and the 755th and 969th Artillery Battalions (155mm).  Early on, these were sited west and southwest of Bastogne (at Tillet and Villeroux), where they were well-positioned to target the emerging threat from the east.  As Bastogne was encircled all but one of battalions (the 58th was cut off by the Germans) were moved to the defensive perimeter between Senonchamps and Bastogne, from where the mobile artillery could respond to attacks all around the perimeter. 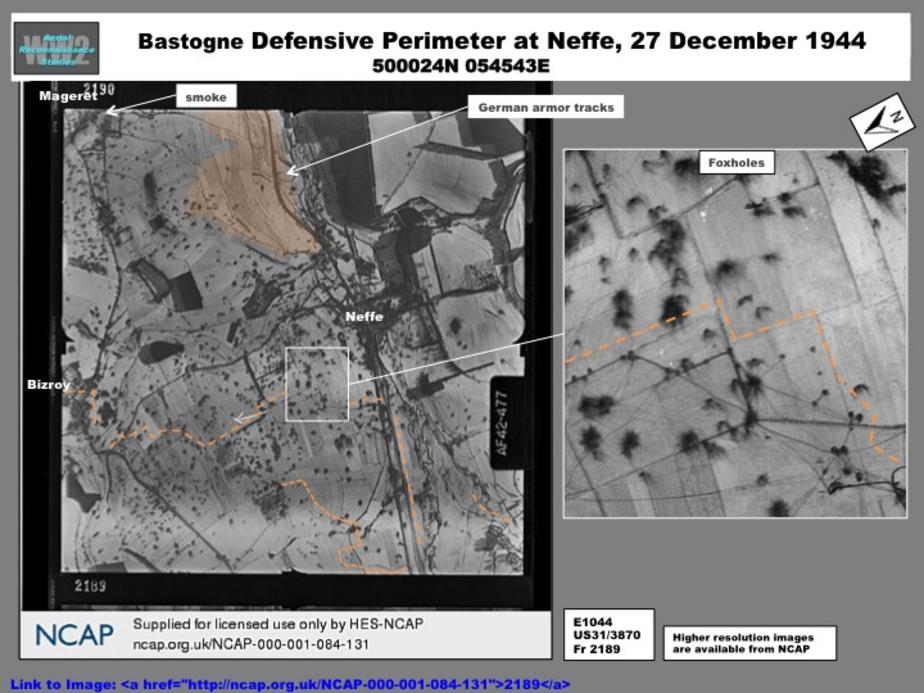 Good quality low-loblique imagery from 26 December showed elements of CCR at Remichampagne (Graphic 1), where a platoon of tanks was screening the advance of an armored column heading northeast to Assenois.  The screening force at least at least nine tanks was deployed outside wooded areas northwest of the village (Graphics 2 & 3).  The column, with at least 20 vehicles --tanks and half-tracks-- was heading toward Clochimont.  Other vehicles were in Remichampagne where the results of recent fighting and airstrikes could be seen (Graphic 4) 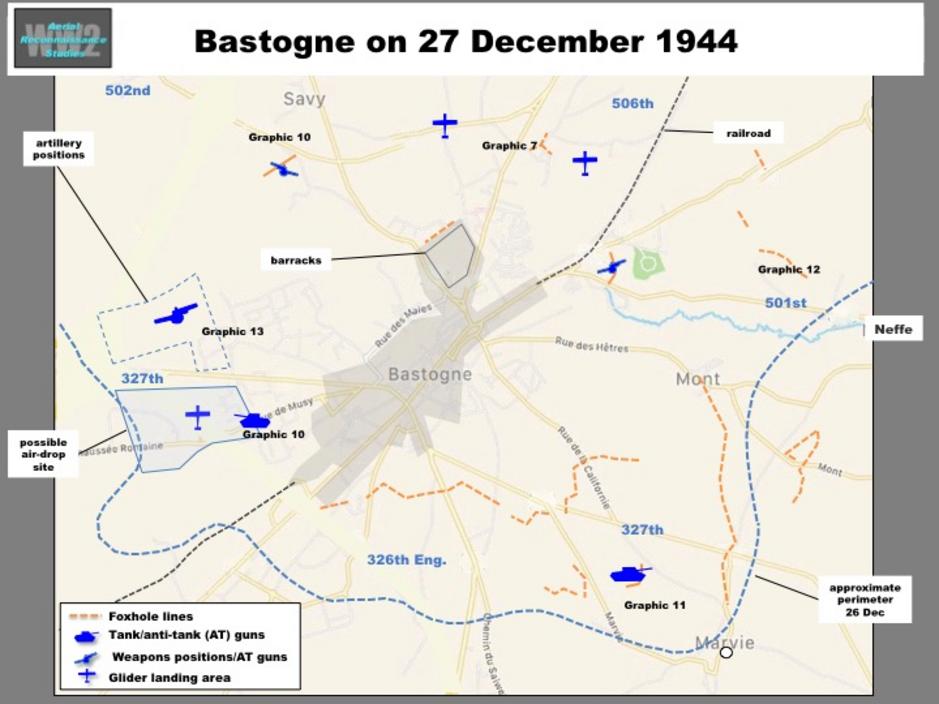 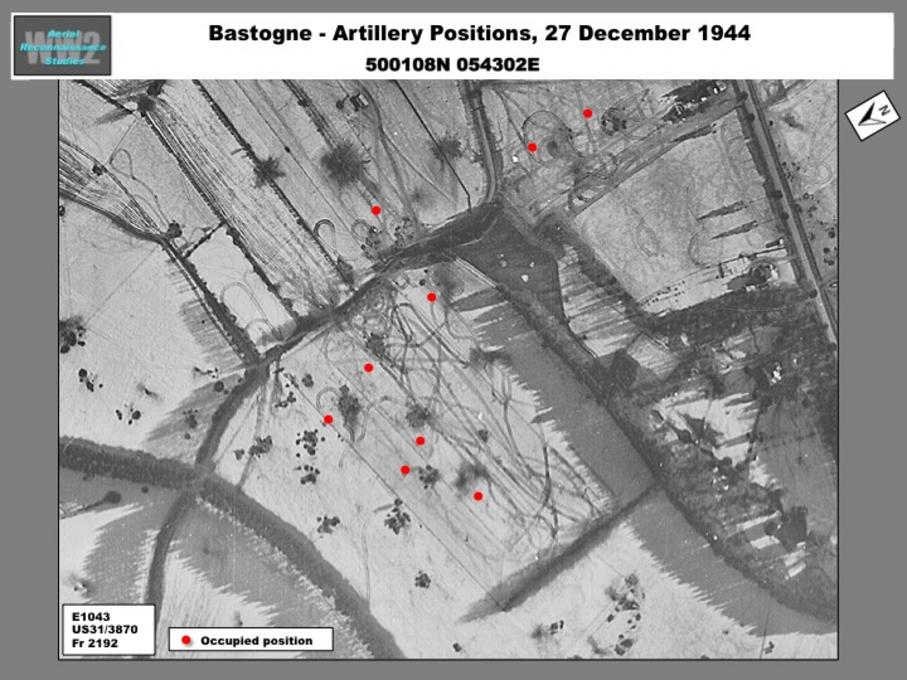 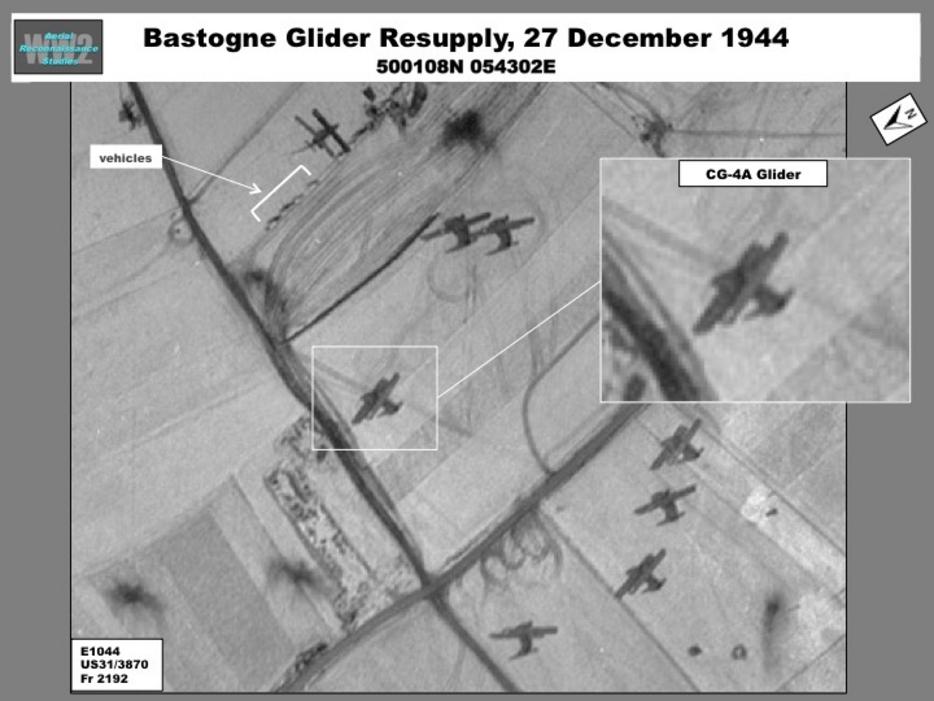 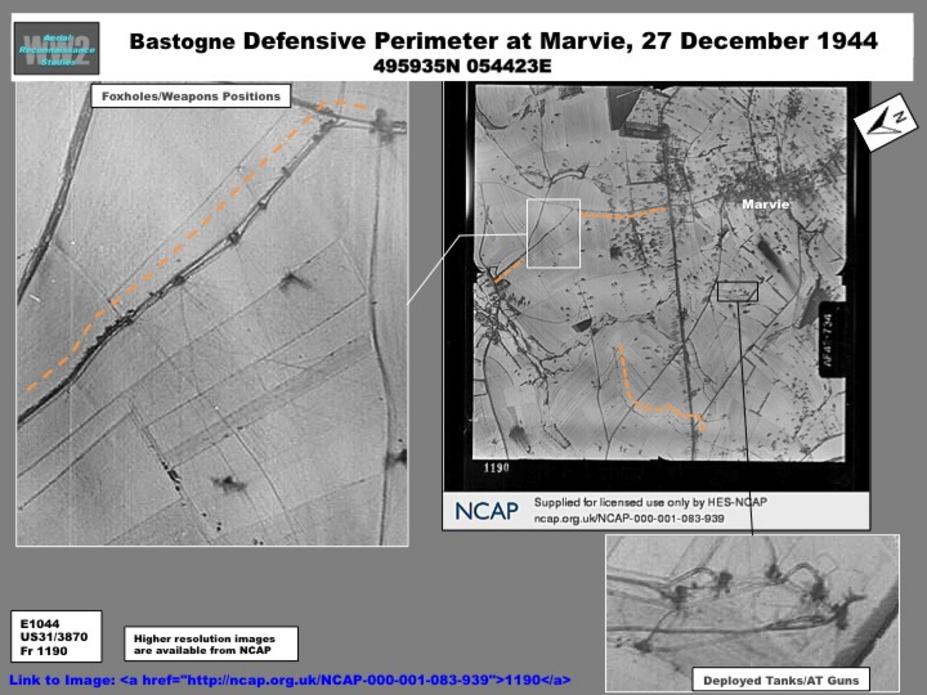