On 30 March at least 59 operational P-47s of the 405th Fighter Group (Graphics 1-3) could be seen in parking areas along the northeast side of the runway.  Parking areas for the 370th on the other side of the runway were not imaged, but two P-51s and four P-38s (one not shown) on the taxiway at the southeast end of airfield (Graphic 4) probably belonged to the Group. The presence of the P-38s suggested that the Groups' conversion to P-51s was not complete.  Less likely is that the P-38s and P-51s were F--4/5 and F-6  reconnaissance aircraft, although the operation of a reconnaissance unit at Ophoven was not recorded.  ​​ 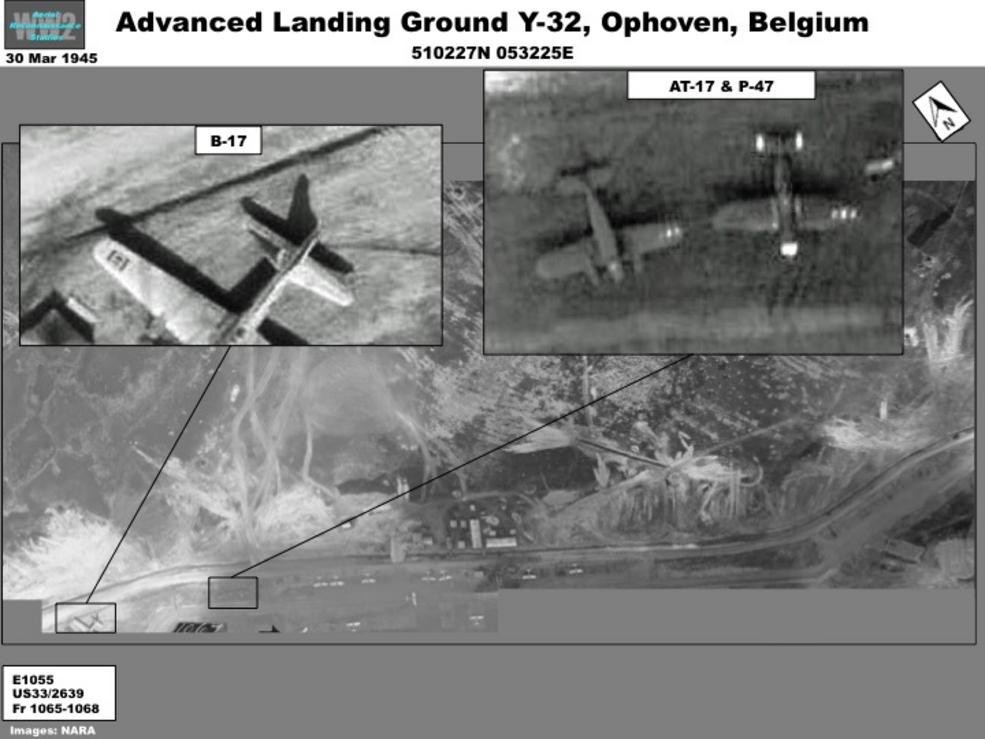 This sortie was flown by the 33rd Photo Reconnaissance Squadron, 363rd Tactical Reconnaissance Group (TRG) at the time based at Venlo, Netherlands (Y-55).  Surviving images indicate the Luftwaffe airfield at Gütersloh (ALG Y-99) was a sortie objective.  Interestingly, in April 1945 both the 33rd TRG an 370th Fighter Group relocated to Gütersloh

Other aircraft at the field included a B-17 (8th Air Force, 4th Bomb Wing/95th Bomb Group), a C-46 transport, two light observation aircraft and a Cessna AT-17 trainer (Graphic 7) 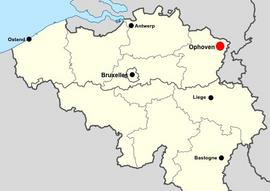 On 30 March 1945 a USAAF reconnaissance aircraft overflew and imaged Advanced landing Ground (ALG) Y-32 near Ophoven (Zwartberg), Belgium, offering an excellent look at an active American tactical airfield in the late stages of the war.  In addition to an entire P-47 fighter group, the coverage showed the extensive infrastructure created by U.S. Army engineers: pierced-steel-planking (PSP) runways, taxiways and parking areas, roads and support areas, including an aircraft repair facility. 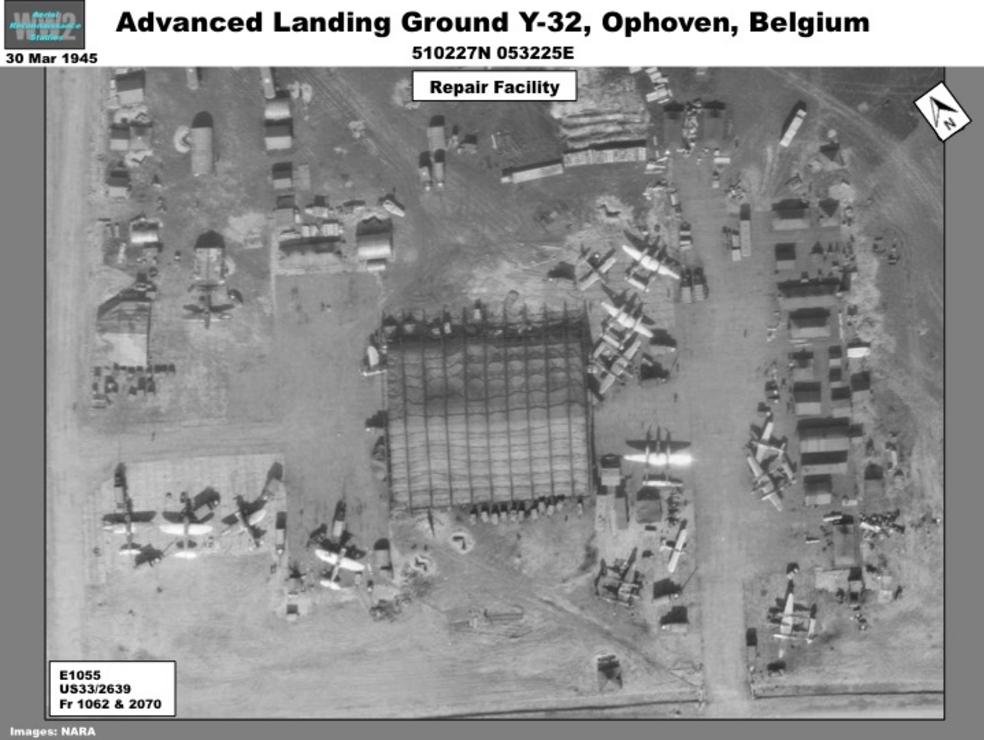 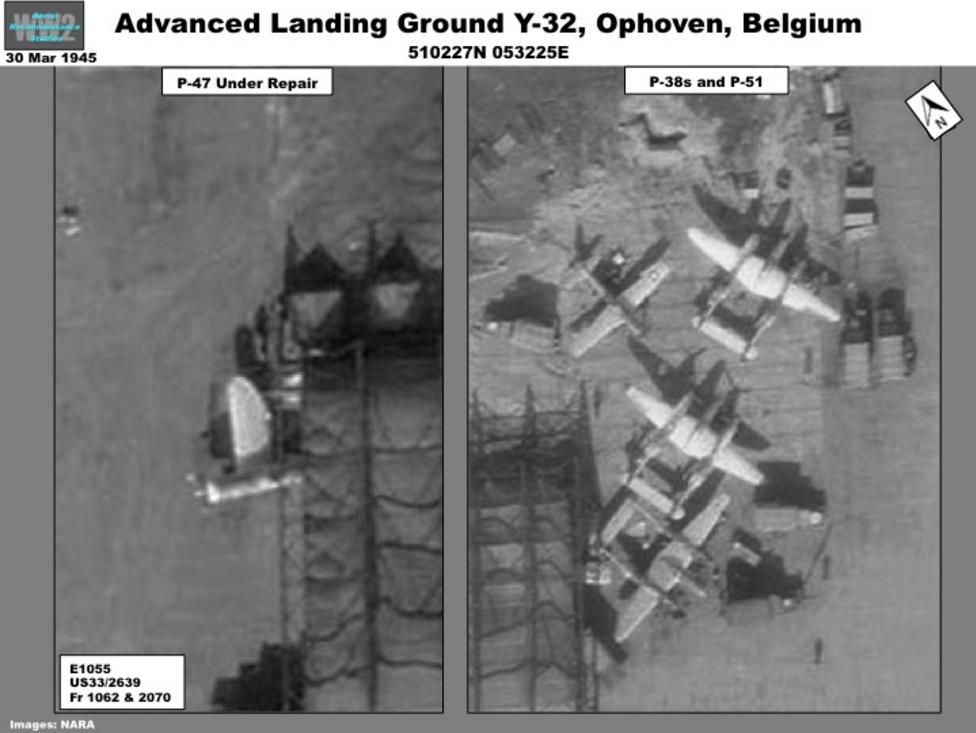 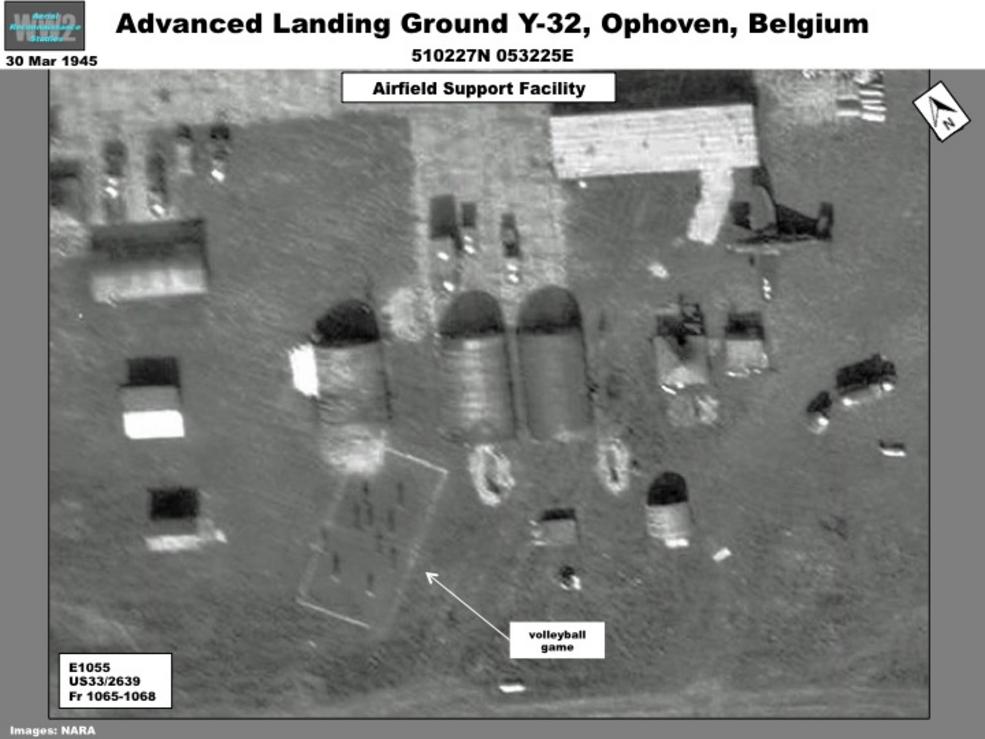 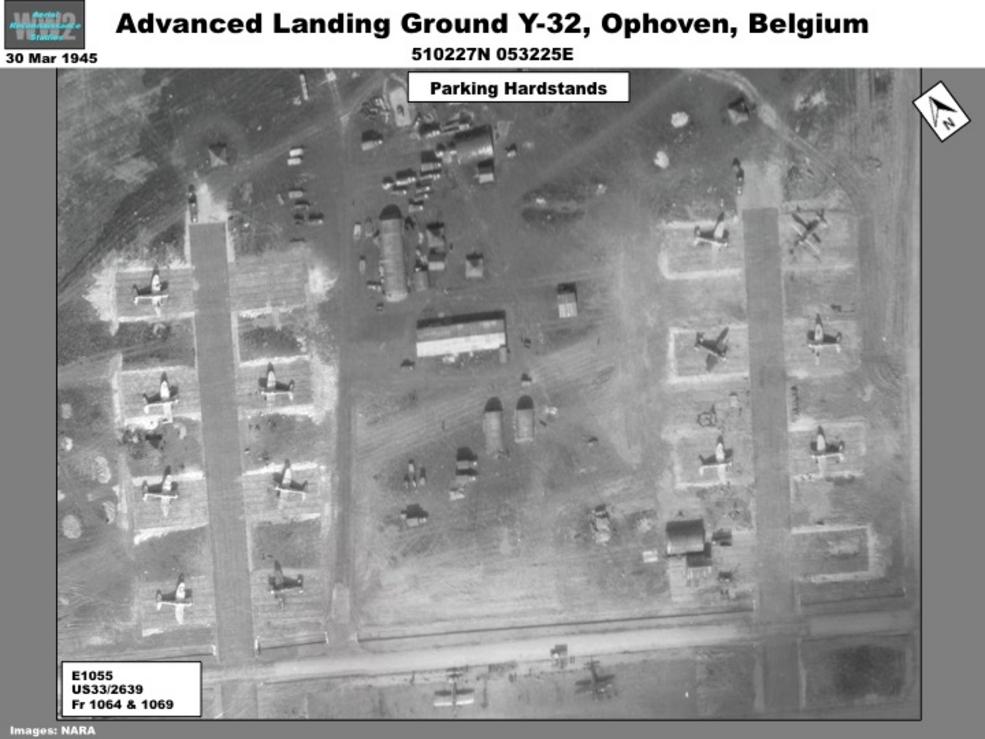 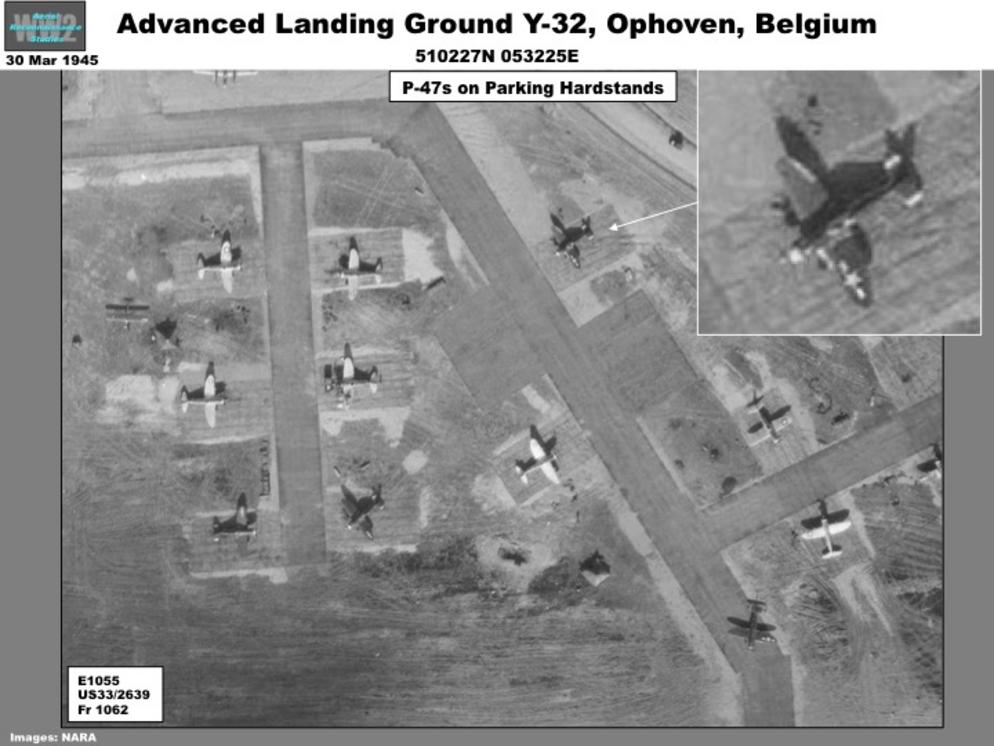 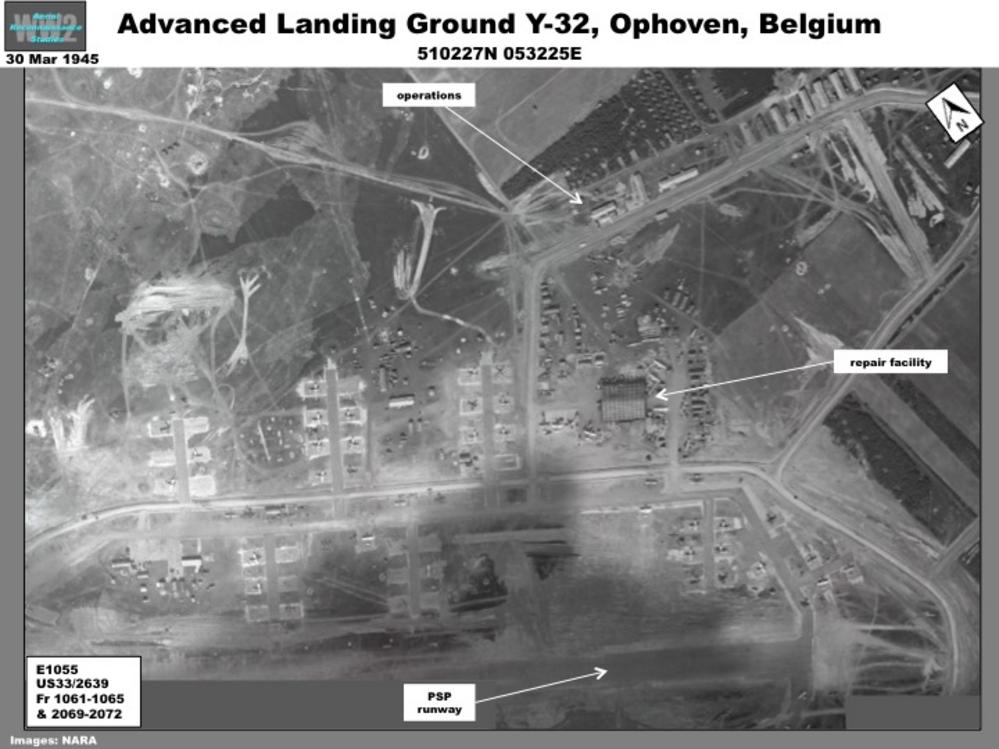 Facilities that could be identified included the probable operations area, communications area, bivouac, ordnance storage and anti-aircraft sites.  A volleyball game in progress at a support facility was was reminder of everyday activities at the airfield; at least one other volley ball cour and an baseball diamond were seen elsewhere (Graphic 8).

The repair facility, with a quonset-shaped rigid-framed structure, shelter, held six P-47s (plus one derelict), six P-38s, two P-51s and an L-3 observation aircraft (Graphic 5).  On one side of the shelter, P-47s were being repaired while on the other side recently replaced P-38s were being stored (Graphic 6).  ​​ 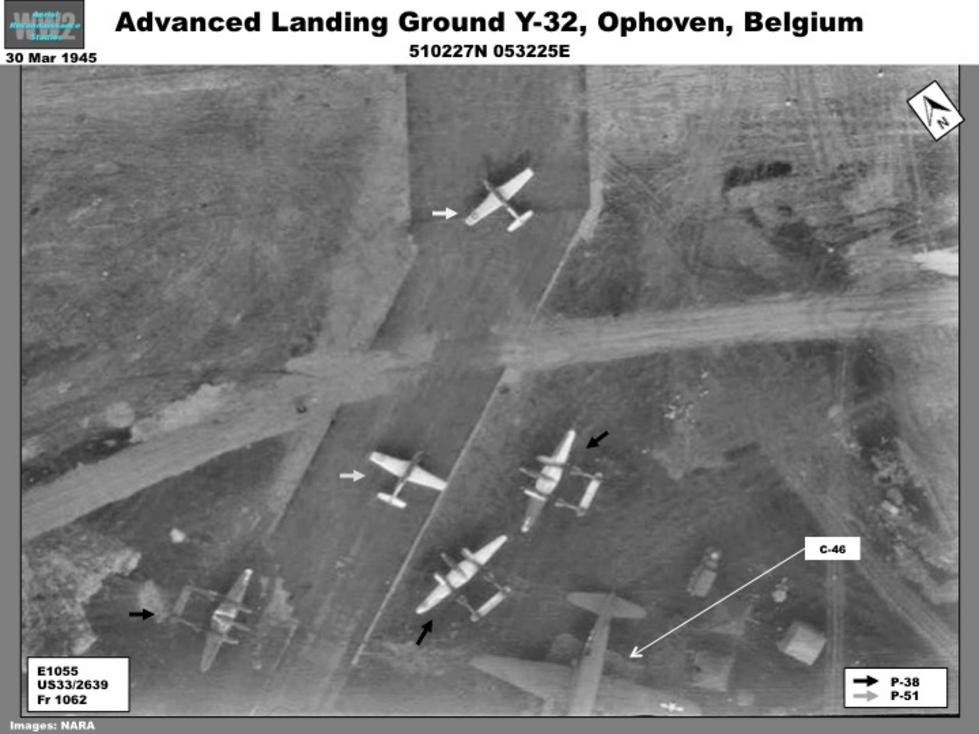