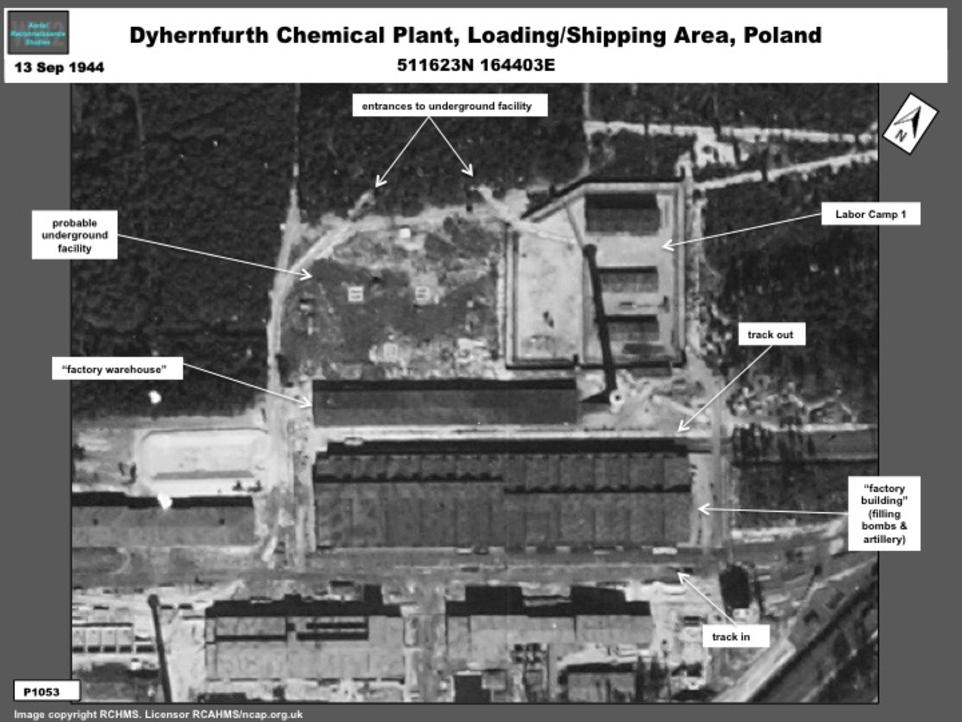 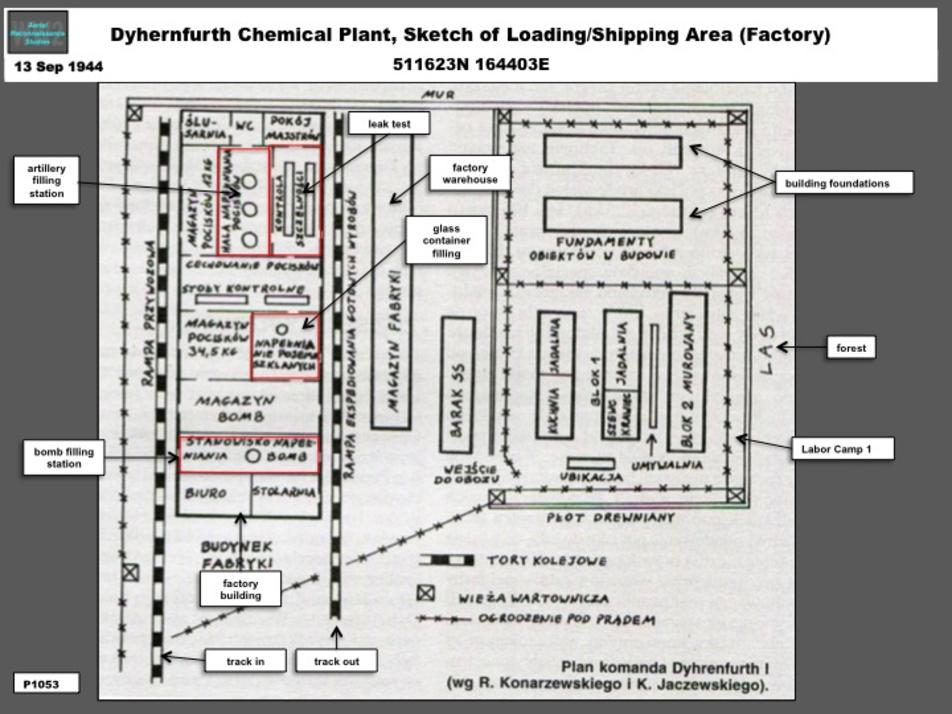 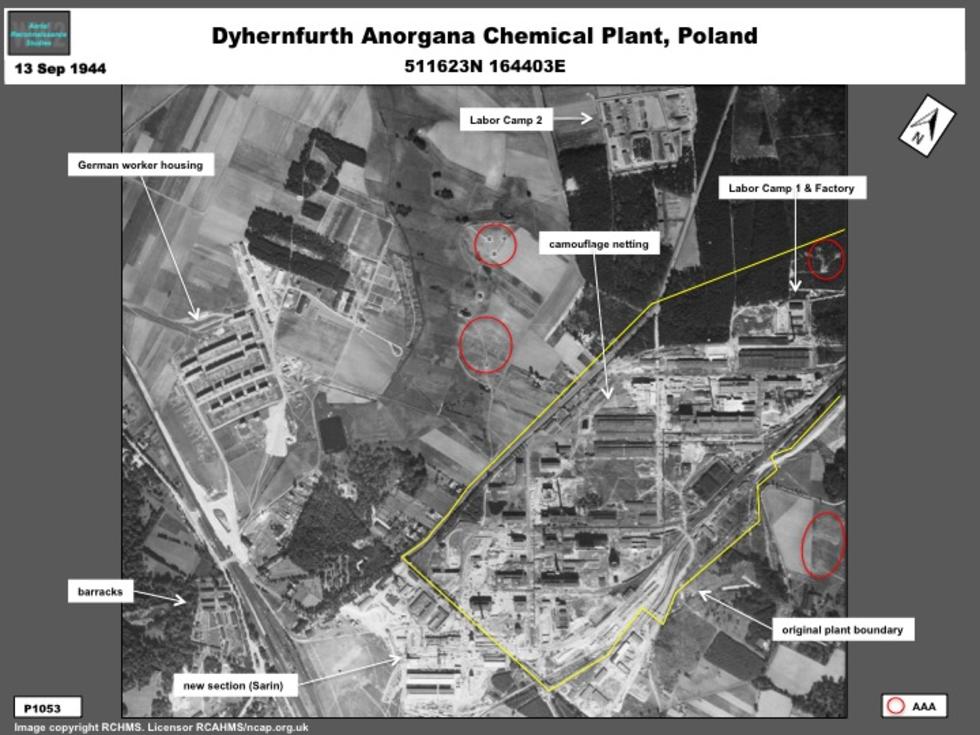 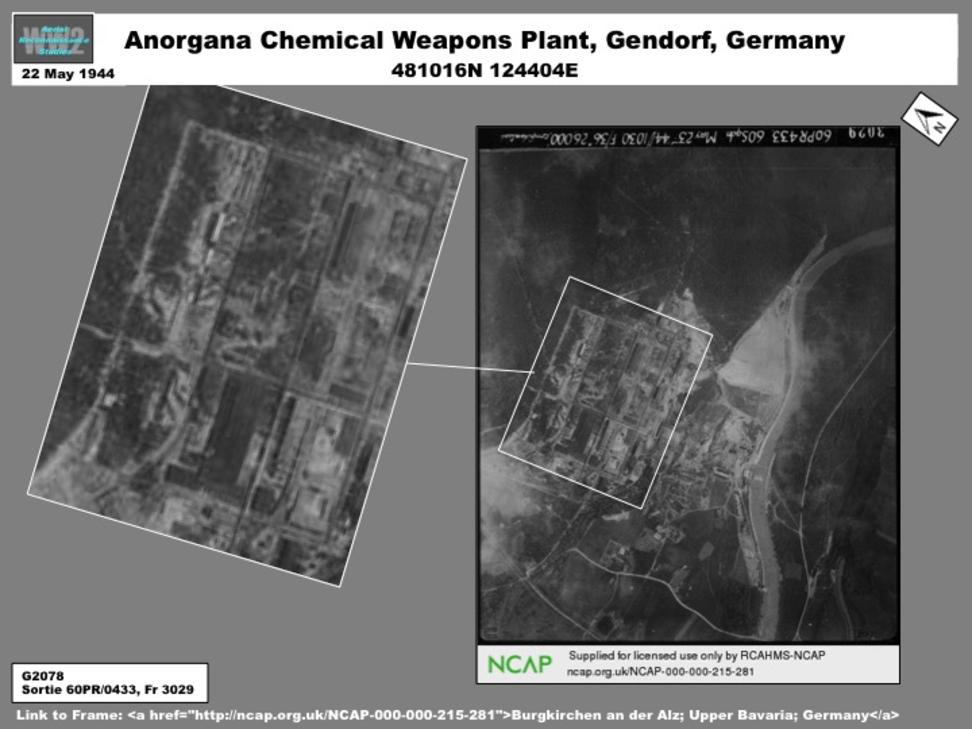 The large new section under construction at the south side of the plant was likely for the planned large-scale production of Sarin Graphic 4).  Part of the plant's original fenceline had to be removed for the new section.  A reported Sarin pilot plant could not be determined, but was possibly located within the original plant area.

Another Anorgana plant at Gendorf, Germany 90km east of Munich (Graphic 8) produced Mustard gas in addition to other chemicals.  All of the major buildings were either camouflage painted or covered with netting; no labor camps were identified. 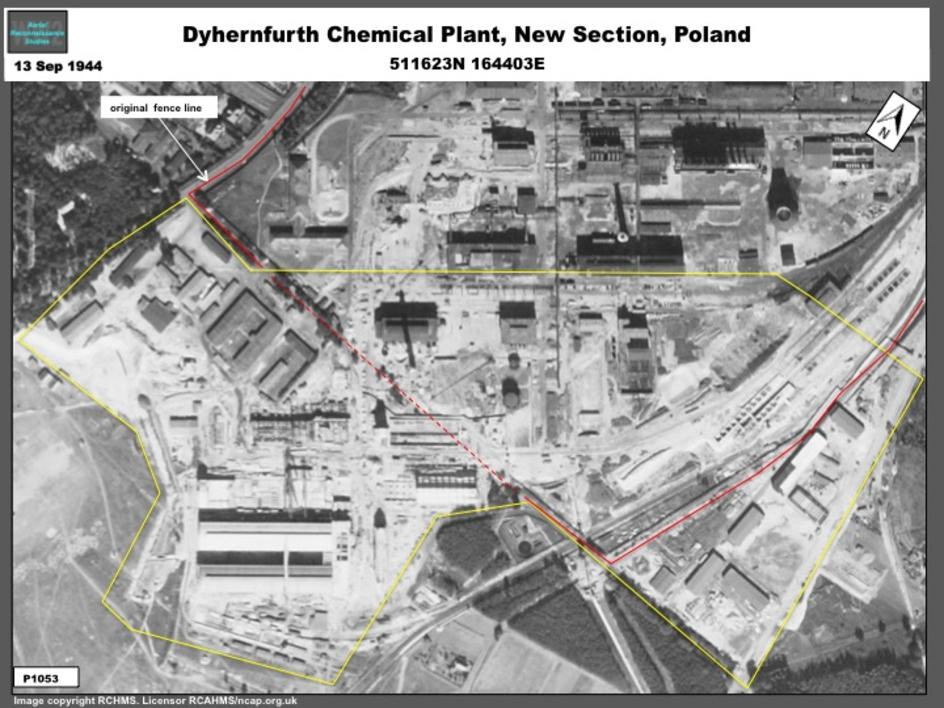 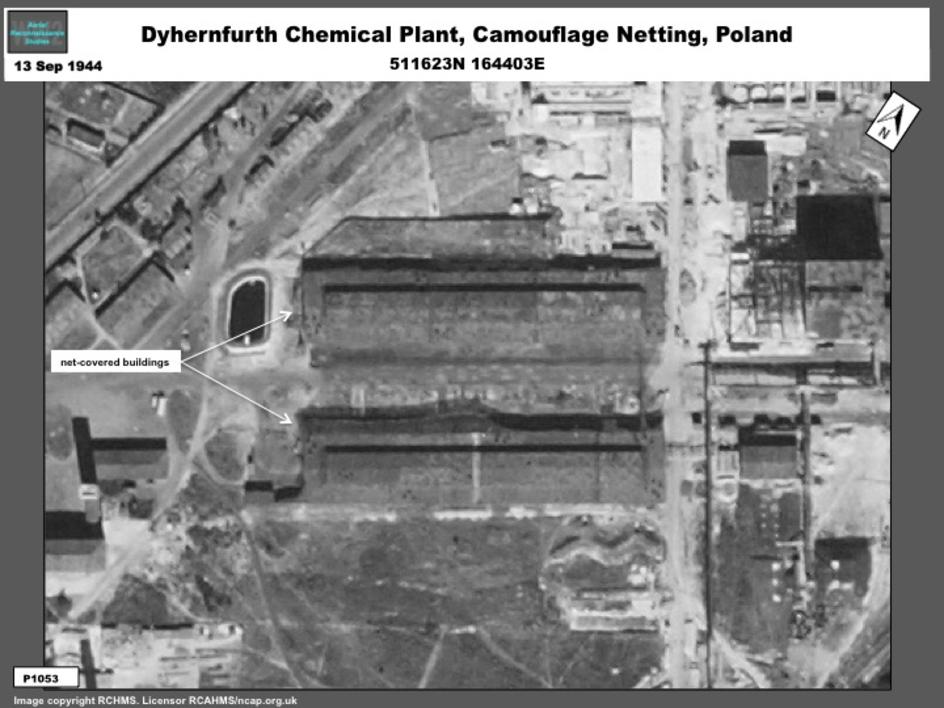 The Dyhernfurth Chemical Plant produced the nerve gas Tabun, which was part of the 'Grun 3' chemical weapons program.  The plant, in what is now Brzeg-Dolny, Poland, was run by Anorgana GmbH, a branch of IG Farben.  Production began in 1942 and in 1944 was expanded to produce the even more lethal compound, Sarin.  Two subcamps of Gross-Rosen concentration camp supported plant operations: Dyhernfurth 1 housed inmates employed in filling bombs and artillery shells with Tabun; Dyhernfurth 2, a larger camp, was opened in 1943 to support expansion of the plant.  In early February 1945 Dyhernfurth was the site of a famous Wehrmacht operation to destroy stores of Tabun after the town was overrun by Soviet troops.  Coverage of the plant on 13 September 1943 (Graphic 1) showed the new plant expansion, both labor camps, and defenses composed of five (four shown) recently deployed anti-aircraft (AAA) sites. Three small established barracks areas (one shown) possibly housed other workers.

Graphics 6 and 7 below show Dyhernfurth Labor Camps 1 and 2 in more detail.  Each camp was enclosed by a fence and wall with guard towers.

Aside from production of Tabun, the heart of the Dyhernfurth plant was the weapons loading and shipping 'factory' where bombs and artillery shells were filled with the chemical (Graphic 2).  The factory and associated Labor Camp 1 were located at the north end of the complex along a forest.  A sketch of the factory [1] indicates that it was composed of a large rail-served factory-type building and a warehouse (Graphic 3).  One track brought in materiel in for fabrication and the other was for the shipment of finished armaments.  Other sources [2 & 3] indicate the factory had at least one large underground facility which may have been covered with trees.  Analysis of the September 1943 coverage indicated the underground facility was built into the hill adjacent to the forest, warehouse and labor camp.  Two entrances to the underground area --one directly connected to the labor camp-- could be seen at the edge of the forest.  The building foundations noted on the sketch may have been for underground structures.  With it's tall stack and proximity to the underground area, 'the warehouse'  may have housed venting equipment. 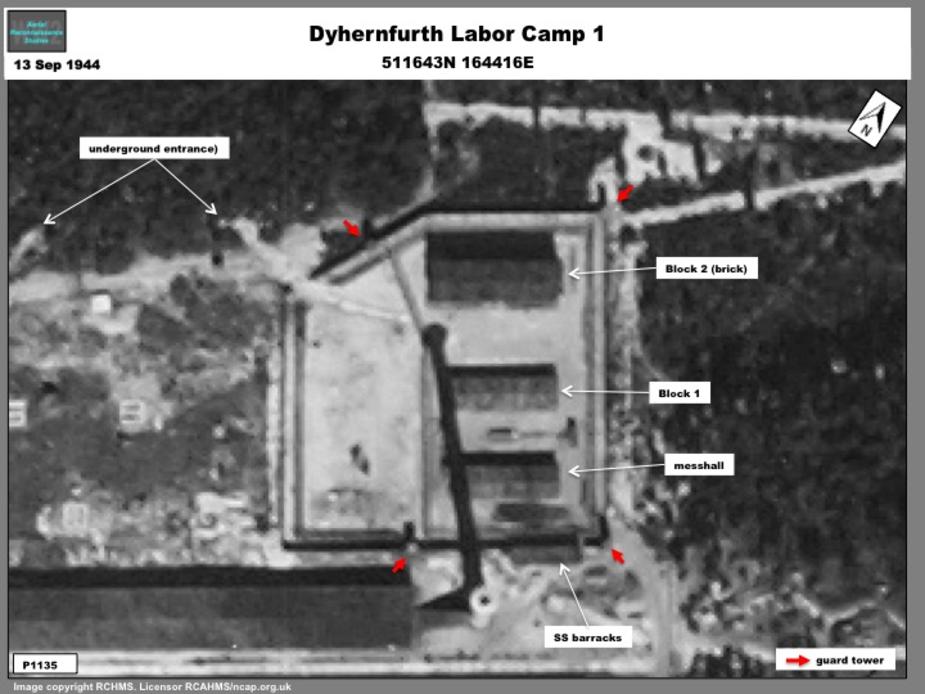 Except for the 'factory" and chemical production lines, the function of other areas of the original plant area remain unclear.  Of some significance were two unidentified camouflage net-covered buildings in the center of the complex.  (Graphic 3). 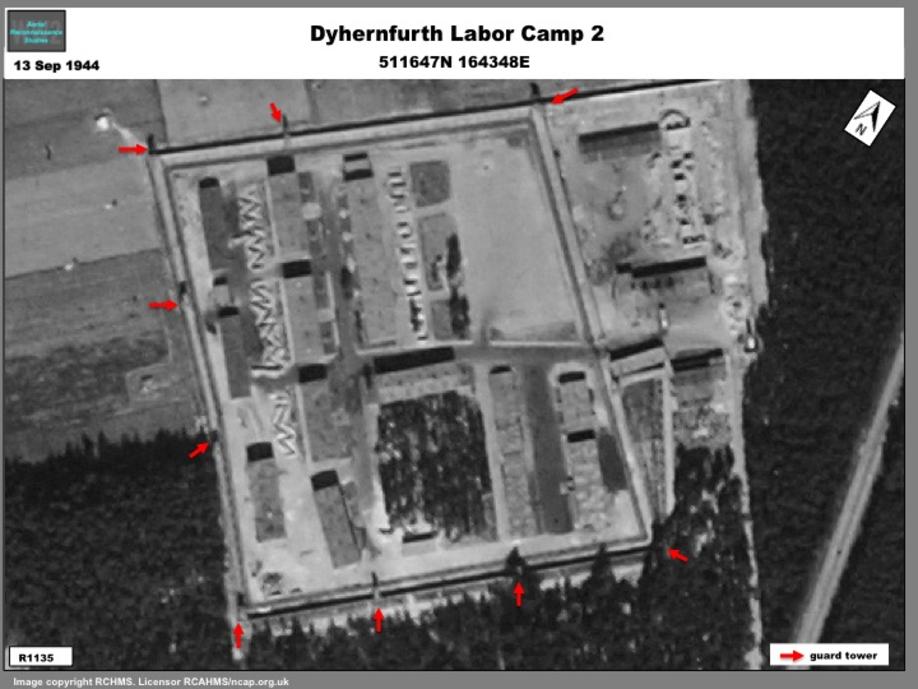